It's been a while since I've talked about Boxsome on here... in fact it was back in May. Back then I GUSHED about the contents of the package that I had ordered from Tommy and I revealed at the end of the post that I had already ordered MORE.

Well, it's been a LOOONG while since that package arrived, and I have been planning for a while to post what was included. So... here you are! 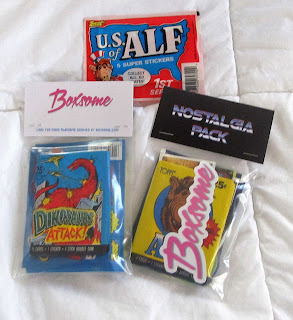 Last time I was a bit more curious about some of the more weird and obscure wax-packs up for offer... but this time I knew exactly what I wanted. I ordered two Boxsome packs that each had an ALF wax-pack and a Dinosaurs Attack! wax-pack included.

That's right. I ordered two of the exact same Boxsome packs. Essentially, I could have just ordered one with two ALF wax-packs, and one with two Dinosaurs ones... but what's the fun in that? 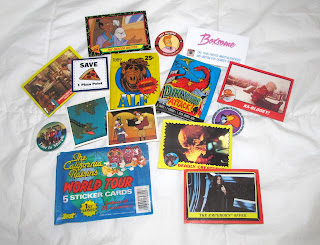 Here's my first pack opened. And boy are there some great extras included! As always, there's a pizza point! Also included are some great properties like Howard the Duck, Gremlins, ALF, Teenage Mutant Ninja Turtles, and Return of the Jedi. There are some Darkwing Stickers, and the obligatory Pongs. There's also a pack of those AWESOME California Raisins World Tour stickers that I GUSHED about last time! 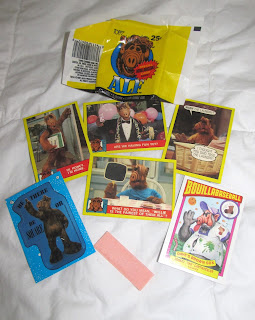 First up is the ALF pack. I owned a copy of ever single card pictured here as a kid. I didn't really appreciate them all back then, but man do I love them now! The four photo cards from the show take me back! The sticker is great too, and out of these wax packs as a kid, I was almost as excited for those as the Bouillabaseball cards!!! But not quite. In my youthful mind, those fictitious sports cards were on par with Garbage Pail Kids. They were the whole reason I bought ALF cards at all. 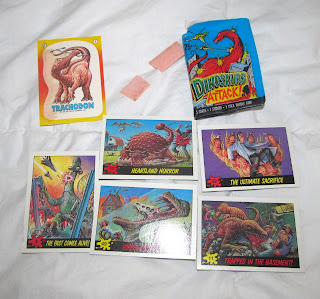 More awesome Dinosaurs Attack! cards. Nothing super special to report here, I needed almost ever single one of these for my own personal collection, so that was pretty cool. I do want to repeat again how much I love these completely disgusting and horribly inappropriate pictures of terrible things being done to people by dinosaurs in ridiculous ways. 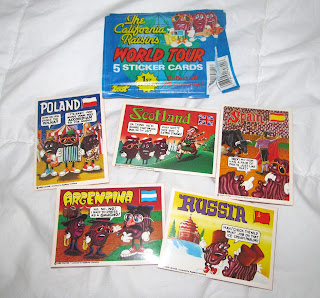 And then I cracked open those sweet California Raisins World Tour stickers and got Poland, Scotland, Spain, Argentina, and Russia! Each one has a ridiculously cheesy pun, riddle, or joke on it. Love these! 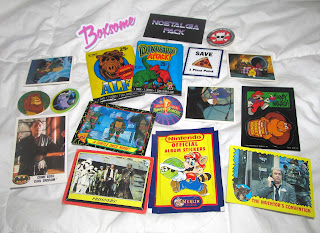 All right! On to pack number two! Another great mix of extra cards here, with more appearances by Gremlins, Return of the Jedi, and TMNT. There's a Batman card and a Mario/Donkey Kong card in the mix this time! Plus: PONGS! There's a nice custom Boxsome sticker included in this pack as well. 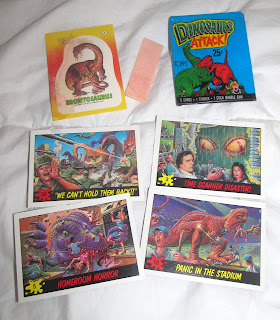 So here's another pack of Dinosaurs Attack! to check out... and what's this? I was shorted a card!!! Not the fault of Boxsome, fortunately. This was a Topps error all the way. Luckily I didn't have any of these yet either. 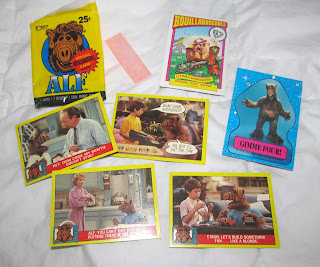 In my ALF cards, I received a bunch of less familiar-looking cards. The sticker I remember vividly, and the Bouillabaseball card is, as always, the desert!!! Gods how I love them! 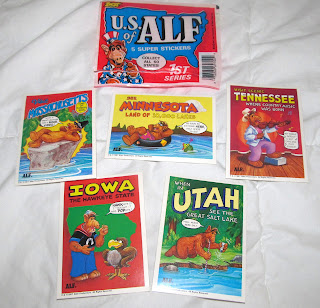 And what is this? In addition to the two Boxsome packages, there was a loose pack of U.S. of ALF "super stickers" included as well. These were obviously cut from the exact same cloth as the California Raisin sticker cards above and the sense of humor is exactly the same... SO I LOVE THEM. It was also really cool to receive them as a free gift with my order!

I want to end this post by saying EXACTLY what I had to say last time:

"All in all, I can't recommend Boxsome ENOUGH. If you were a card-collector in the mid-to-late 80's you will find a GOLD MINE on Boxsome. PLEASE for your own good, go check it out. The prices are incredibly reasonable, and the packs are such a random load of fun that you will have absolutely ZERO buyer's remorse."

Because I feel it still holds completely true. Thanks again to Tommy Day for running such an awesome service over there at Boxsome!

I'll be back soon with some Geeky Goodwill Goodies, but in the mean-time, Happy Hunting!
Posted by Derek Ash at 8:19 PM