The FIND Part 2: Digging Deeper in the Bin.

So last week, the League of Extraordinary Bloggers talked about epic yardsale and/or flea market finds. I recounted the tale of the bin of action figures I brought home, and showed off a few of the specimens I found inside. You can read about all that HERE. Just as a reminder, here is a shot of that bin in all its glory. It doesn't look like this anymore, because I've taken all the stuff I plan on keeping in my collection and put it out on display. Everything else I plan on selling or giving away here on m'blog. I'd love to at some point make my 40 bucks back on this bin (or it's equivalent) but we'll see.

And speaking of seeing, I'm dipping into the bin and hauling out another handful of stuff to show you guys! 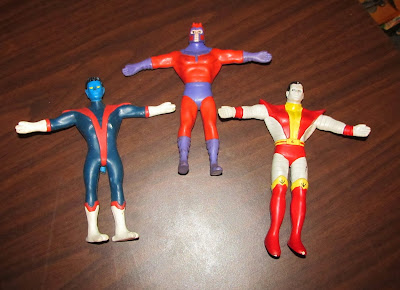 So, this post will be themed. And what's the theme? X-MEN!!! (And for some reason Daredevil). Here are a trio of crucified mutants... er... I mean Bend-Ems X-Men figures from 1989. I never actually owned any of these as a kid, because I was never a big fan of bendy characters that aren't really that bendy.


These are sort of the action figure equivalent of those ballistics dummies they use to test shrapnel spray on Myth-Busters. They feel like tiny rubber corpses. They are not very bendy at all, and I suspect they never really were. I mean, you can bend them if you want, but they're not going to stay in that pose for long.


Due to the rubber nature of these toys, they also look pretty grungy. Old rubber tends to get filthy. Heh. Colossus's legs and Magneto's moobs are streaked with grime. When I was a kid I always pronounced it Mag-NET-Oh, not Mag-NEET-Oh. It drove everyone who actually knew anything about comics (like the guy at the comic store...) INSANE. I just though Mag-NEET-Oh sounded dorky and not scary at all. Like, "Oh look! Here comes that neat-o villain!"

And even more unfortunate is the fact that Nightcrawler's tail broke off, leaving him looking like he's got a blue turtle-head poking out and no bathroom in sight. That's why those BAMFS!!! alwas smell like sulfur.


The box also contained this FILTHY Daredevil figure, which I can't tell is someone used a marker on or what. But I don't really care because he's gross. I'm going to try to clean him up, but I'm not holding my breath. 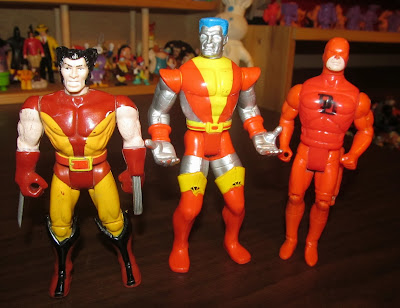 So to continue the weird, X-Men + Daredevil theme, here we have a trio of old Toy Biz action figures. I owned all three of these as a kid/preteen/too-old-to-be-playing-with-them-whatever...


And for some weird reason I either always wanted Daredevil to find out he was a mutant all along, OR I wanted to team him up with my Kenner Batman figure so the two were a pair of crime-fighting vigilante MANIACS!!! I had a lot of random crossover stories in my imaginative play as a child.


Doesn't Colossus have a weird Fabio vibe to his face here? Colossus was and still is one of my absolute favorite X-men. I cried when Joss Whedon brought him back from the dead in Astonishing. Hah! Kidding!* AAAaaanyway... This figure has a "lifting one very specific heavy item" action feature, which still works. As none of the figures in the box came with any accessories, he is missing his giant bar-bell which he would lift menacingly to intimidate villains. 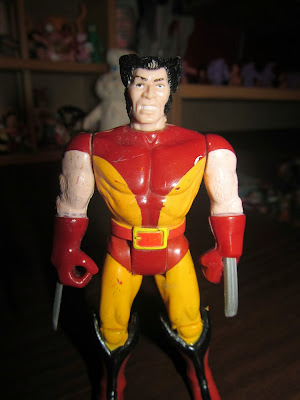 And here is one of my personal Holy Grails. Not because he's hard to find (you can find dozens of these on eBay) but because I wanted him to fine me. I wanted to find one of these classic Wolverine action figures in the wild, and cheap. This action figure was sacred to me when I got it as a kid. Wolverine was just hitting that period in the late 80's to very early nineties where he wasn't over-exposed yet, but he was very clearly the COOLEST X-Man of the times. The only other X-Man to rival Wolvie in cool points for me at the time was Storm. This was coming past the end of Inferno, and into all of the weird stuff leading up to the Muir Island saga. This was still Wolverine's costume. The orange and burgundy/brown. This Wolverine was like the Snake-Eyes of the X-Men back then. 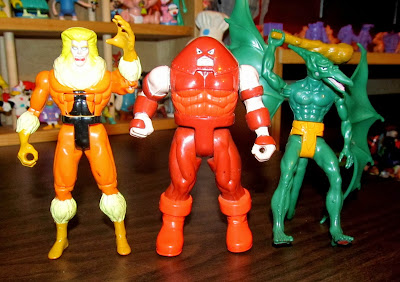 And who are these bad boys? Why some of the X-Men's most strikingly recognizable villains! Also from Toy-Biz, I was very excited to find these!

Here is one of the X-Men's most... er... confusing villains. Sauron. At first glance, he's a pterodactyl man, right? That sort of seems like enough. But no. He's also able to hypnotize his foes AND he's a vampire! Well, an energy vampire. There has also been so much ret-conning done to the character that it's sort of up for debate as to whether he's actually a mutant or not. But what's REALLY weird about this action figure is that he is completely frozen in this pose. None of his joints move except his jaw. So... I guess I found my display pose!


I was INTENSELY excited to see this Juggernaut figure in the mix, because I had the exact same one when I was a kid, and he was an INTEGRAL part of Hordak's army when I tossed all my toy-lines together. When I got the bin home and looked closer, I was disappointed to discover this was not, in fact, the exact same one. Mine had wheels in the feet so you could roll him into enemies, and a lever on his back to make his fist punch up and down. This one has neither, and instead has little circular spots on his feet where the wheels should be, and a weird grey depression in his back where the lever should poke out. I was a little bummed, but other-wise fine. He looks almost identical in every other respect. The really weird thing is that I can't find reference of this version of the figure anywhere.


And finally we have the classic version of Sabretooth, which is to say my favorite version of Sabretooth. If you compare this shot to the group shot above, you'll notice his chest has a "battle-damage" feature (with strangely enough THREE claw wounds) that "heals" when you change it back. I loved the early Wolverine vs. Sabretooth encounters, that came after all the wussy "Hey, everybody kills Sabretooth!" Marauders fights, but before Wolvie and Sabey became such a cliched bickering old married couple that they had to dump one of them completely.

Overall these action figures are probably some of my very favorites to come out of the bin altogether. There was some more great stuff in there, but almost nothing that hit me in the nostalgia gut like these guys did. Almost.

But that's it for tonight! But we've still only barely scratched the surface of this bin! Next time I think I'm going to show off some of the not-so-great stuff I found in the bin (the stuff that made me think if I'd been more picky about what I was buying, I could have gotten a MUCH better deal...) so you can see how the other half lives... so I'll be back with that at some point.

But before THAT, I'll be back soon with more Geeky Goodwill Goodies! Until then, Happy Hunting!

* I'm totally not even kidding. And I was a grown-ass MAN when I read that comic.
Posted by Derek Ash at 6:25 PM