Who can take a Saturday and change it into fun? The Trash Man Can...

So I'm sitting in my Cave one Saturday morning, just minding my own business when my wife hands me a package that came for me in the mail! Turns out it was from my good friend the Trash Man over at Pop Pop! It's Trash Culture, and I was about to have the best Saturday morning since I was a kid in pajamas munching Cap'n Crunch and watching Muppet Babies! 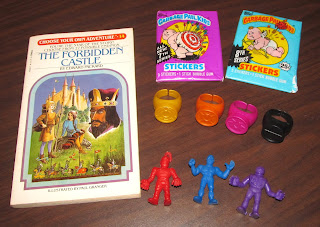 Upon opening the pack I discovered this pile of loot! Now, I have just recently WON a GIGANTIC pile of loot from the Trash Man in his monthly Trash giveaway. So I was scratching my head at WHY I would be receiving another one so soon... and then it dawned on me... this was a consolation prize! See, Trash Man sends out BIG prize packs, and then he sends out smaller ones to the losers each month. I may have won the very first one, but I LOST the second one (Yeah, I had the audacity to enter into the next month's drawing... Don't judge me. These prize packs are SOFA KING amazing). So I went about my business, and forgot about the whole thing. UNTIL this showed up!

See, the cool thing about the Trash Man is he PAYS ATTENTION. He knows all my weaknesses. He remembered how much I WIGGED OUT about the Lantern rings he sent me last time, so he tossed a few more my way this time. And believe me, I verbally, audibly, and EMPHATICALLY shrieked like a teenage Beatles fan of the female persuasion (you know, the kind-of-homely-but-kind-of-hot-too ones with the horn-rimmed glasses that probably ended up being your Aunt or something?) when I saw these. GODS I LOVE THESE!!! I have all of them but 3 now, and I will be tracking those down post-haste! 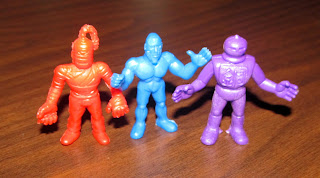 MUSCLE guys!!! When I was a kid I thought the guy on the left was supposed to be a mummy, so he attacked people with bandages. The guy in the middle was pretty much just Ice Man. And the guy on the right looked like a pepper grinder to me, so he would puff clouds of irritating pepper at people, blinding and burning them while he fought. I was such a MUSCLE nut!!! This brings my current collection up to 26! I miss having these so much. 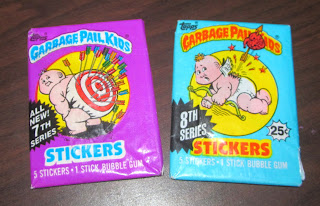 Here are a pair of Garbage Pail Kids wax packs that I refuse to open. I love them just the way they are! They bring back such great childhood memories. Some of the happiest times of my young life were the walks I used to take down to the store to pick up these wax-packs. I am so incredibly thankful for these. 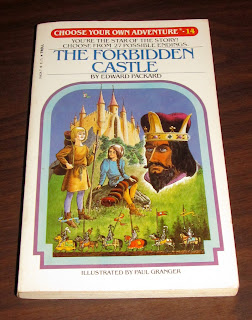 Finally, there was another of my collecting staples: A Choose Your Own Adventure book! "The Forbidden Castle" which is another perfect addition to my shelf. Long-time readers will remember that next to only maybe Little Golden Books, CYOAs are my favorite kind of books to collect. And Trash Man remembers that. Trash Man is the king of KNOWING what you like. This package I received was incredibly generous and tailor-suited for me.

Thank you Trash Man, this package was really special to me, and it made my day.

So that's it folks! I'll be back very soon with some more Geeky Goodwill Goodies! Until then, Happy Hunting!