So... I've made a few friends around the internet lately. I send them things. They send me things. And sometimes... when other people send those people things... they send those things on to me.

I've blogged before about the Trash Man doing giveaways over at Pop Pop! It's Trash Culture! These giveaways are epic. There are toys in them, and old collectibles... and comic books... and movies... and tchotchkes  galore. They are just crammed with stuff. Amazing stuff. 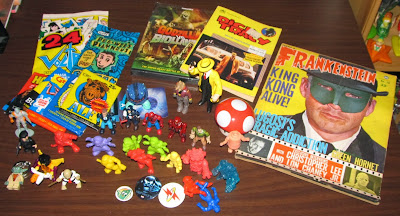 Originally, John offered me a handful of Monster in My Pocket figures. I gladly accepted. But when the package actually arrived... well there was quite a bit more stuff in that box than just MiMPs. Everything you see above was hiding in that beautiful box. I will now talk about all of it in depth, and in graphic detail that lets you know EXACTLY how much I love these toys.

First up, let's look at the LEGO-style mini-figures. We have some Mega-Bloks mini-figs from back when they still had the Marvel license. The Sandman, Mr. Fantastic, Captain America, and Spider-Man are all in attendance. The red guy on the end is a HALO guy... but since I don't play video games for the most part, I have no idea if it's Master Chef or a Master Shepard or whatever (ha! I don't know video game character names! I'm like an old person!) Then the soldier on the far left is a soldier that appears to be from the Character Builder line. He's pretty bad-ass and adorable at the same time. My absolute favorites of the bunch are the LEGO Yoda key-chain and the Kre-O Sunstorm. 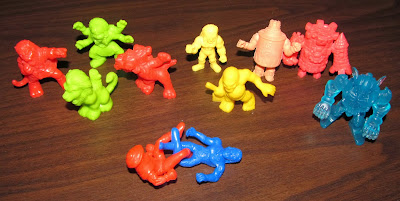 Mini-figures!!! Left to right we have 5 Monster in My Pocket figures. The yellow guy in the very back and the two leg-wrestling fellows are from (I BELIEVE) the "Kinnikuman Ultimate Muscle Kinkeshi" line. There's a hot-pink King Castor from the O.M.F.G. line, and a soft-rubber kinkeshi figure in light pink next to him. NO IDEA who the translucent blue guy is, but I absolutely adore him. 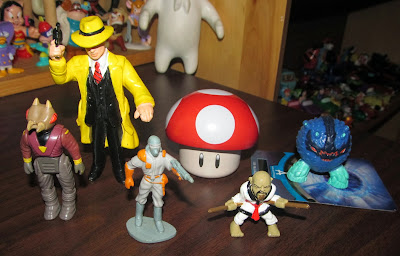 To finish up the toy-portion of the package, we have a Super Mario Brothers red mushroom tin. On the right of him is some sort of squishy rubber battling virus figure (he came with the card you see him satnding on... but it's in another language...) The kung-fu guy up from is another Fisftul of Power figure, and the guy in the weird hazmat suit to the left of him? I don't recognize him. You can see an old Dick Tracy PVC figurine towering above all of them (I had this one when I was younger) and the most amazing piece of them all? The Dino Riders Termite figure on the far, far left there. This is one of the exact figures I owned and ADORED as a kid. I liked this particular figure so much that I didn't want him to be a villain. So he defected over to the good-guys team. He and my purple Construx Alien and my Adventure People X-Ray Man would go on space adventures together ALL the TIME. John featured him in a HILARIOUS post over on his blog before he sent him on to me. Please do yourself a favor and click on that link. I think my favorite shot is of Termite looking longingly out the window at the end. 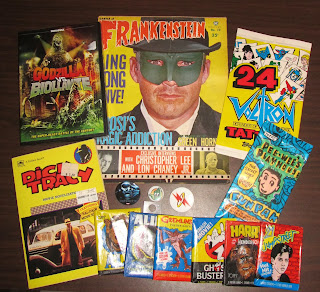 And finally, a bunch of cool odds and ends. That Frankenstein Magazine is a treasure trove of old monster-movie GOLD that I will be poring over for quite a while. I don't want to open the Voltron Tattoos or the Pee-Wee's Playhouse Funpak... so those will remain sealed (for now). You can see a whole slew of wax-packs along the bottom there including Alf (!) Alien, Gremlins 2, Ghostbusters 2, Harry and the Hendersons, and 21 Jumpstreet! All cool. There's a trio of awesome pins featuring Thanos, Gumbi, and what I believe is a Reverse Flash symbol? Then a Dick Tracy novelization, and a Godzilla vs. Biollante DVD round out the awesomeness.

So John went over-board... which just made it that much easier for me to send off a pack of junk his way as well (which I had already been planning to do before he beat me to the punch!). It was incredibly kind and generous of him to share his Pop Pop! Trash Culture "One Man's Trash" prize pack with me. I also want to indirectly thank the Trash Man for putting on his monthly give-aways. He is giving out NOSTALGIA GOLD over there people!!!

BUT I also feel it bears repeating: John Gaither is Awesome!

That's it for me you guys! I'll be back soon to show off some Geeky Goodwill Goodies! Until then, Happy Hunting!
Posted by Derek Ash at 8:09 PM