So here are the spoils of a payday Friday past... the payday Friday of August 30th to be precise... I went in expecting very little... And actually came out with some pretty great finds! 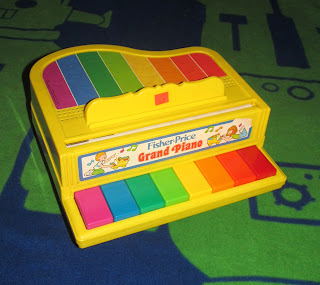 Not sure what I'm going to do with this. It's a Fisher-Price Grand Piano from 1986. It doesn't really fit my collection... but I couldn't leave it there! It only has a bit of mild damage on the top right corner of the front decal. The rest looks great! Still works perfectly with these little colored tiles popping up after each key is struck, with notes like "do" "re" "mi" and little animal faces printed on them. I actually have a pretty good idea of where this will probably end up already... hmmm. 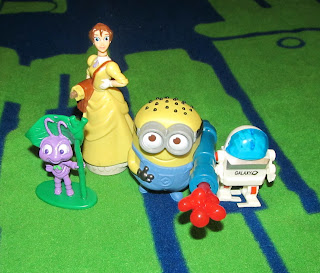 Got this grab-bag for .99 cents! I'm not even a little bit excited about Jane from Tarzan, honestly (sorry Jane, you don't even have your parasol with a monkey on it. Maybe if you did... but you don't) I bought this bag for the other 3 items. This will mark my (if memory serves) first ever Bugs Life toy. Little Princess Dot is a cereal premium from 1998. Her paint apps are not great, but she's cute, and she is now enjoying a spot on the shelf next to my other Pixar characters. I also found one of those pretty-new Despicable Me 2 Minion Happy Meal toys! One I didn't have already! And he's a slide whistle! Since I refuse to put my mouth on a second-hand kids toy I will simply have to trust he still works. And I finally came up with a new robot to add to my robot collection! Look at that cute little "Galaxy" guy! 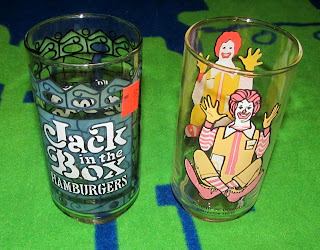 The reason I always scan the glass wares aisle! Collectible fast food glasses! Ronald there on the right I have been hoping to spot for a while! Used to be a few years back that you couldn't throw a rock around here at a thrift store or antique shop without shattering just a whole collection of these McDonald's character glasses. Now they've become collectible and I see them NOWHERE. These and the two Muppets glasses I found there awhile back just make me feel justified in sweeping down this section every time I visit. Now... the Jack in the Box Hamburgers glass... is a creature of a different nature. I had no knowledge of this glass and it's collectibility when I bought it. We don't have any Jack in the Box restaurants around here, so I've never seen these around. There's a big Coca-Cola logo on the opposite side. Still can't any kind of idea from the internet how old it might be... but I don't really care. I like it. I bought these 2 glasses for .99 cents apiece. 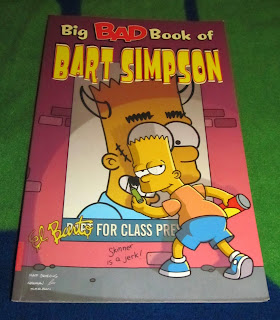 Yet another Simpsons comics collection! I've really accumulated a stack of these at this point. This makes the seventh tpb collection I've picked up at Goodwill! Maybe someday I'll actually sit down and... like... read them. .99 cents for this book! 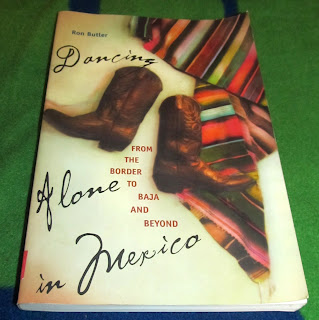 I am a sucker for interesting-looking travel books. so Ron Butler's "Dancing Alone in Mexico: From the Border to Baja and Beyond" looked like a quirk and interesting read. I've really tried to slow down on buying stacks and stacks of random books, but this one called out to me. I paid 1.99 for it 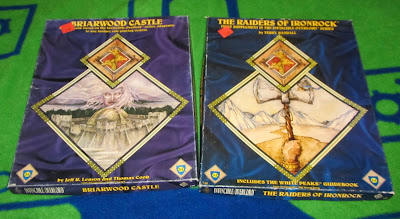 Next up are probably the two most exciting finds of the whole Payday Friday for a geek like me! These are a pair of old Invicible Overlord role-playing supplements from the late eighties (1988-1989). I bought them when I was at the height of my role-playing FEVER in the early 90's at the Ellsworth All-For-A-Dollar. There were three of them that I found back then, and there were actually three of them that I saw at Goodwill the day I picked these up. The third supplement was called "The Haunt" and it is the only one of the three that I still own to this day. I don't have the box anymore, however. I thought about buying the other copy of the Haunt from Goodwill, but with a 2.99 price tag on each one, I just couldn't afford it. So I brought home the two I was missing. Here's a picture of what the Briarwood Castle looks like on the inside: 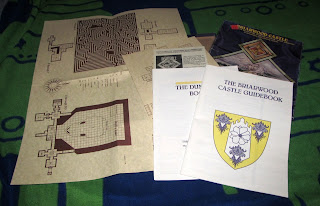 Raiders of Ironrock looks pretty much the same, hence no picture included. Pretty standard fare for a role-playing game supplement. These are seamlessly adaptable to the AD&D 2nd edition system, so no core rule book required as long as you have the official AD&D stuff on hand. I couldn't begin to tell you if they are fun to play, but I know I was pleased as punch to find some old roleplaying game sets from when I was younger. 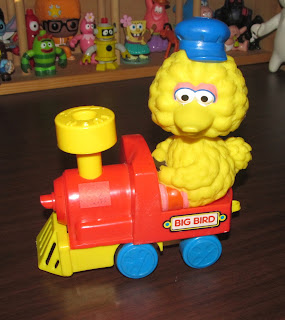 Aaaaaand finally, this guy. I'm cheating a little bit here, as I actually picked this up on Saturday. I picked it up and looked at it on Friday and then for some incomprehensible reason I PUT IT BACK. It's a Sesame Street train with Big Bird driving! How could I not snap that up for .99 cents? I think I tried reasoning that it was a little too big for me to sensibly display (and it is... I still don't have a "spot" for it...) and so I set it down and bought my stuff... and went home. Then I went to Laura Huey's Boo Booby Blog, THAT NIGHT and saw that she had the EXACT SAME Big Bird Train on display at her house! And I WANTED IT SO BADLY. I even bemoaned this fact on her blog, that I had held this item in my hands and then put it back without buying it! She of course did the sensible thing and scolded me for not having picked it up. SOOOOO... I went back Saturday morning and bought it. I'm nothing if not obsessive. Turns out there's two other cars to the train, one with Cookie Monster, and one with Bert! Neither were in attendance at Goodwill, but I will be keeping my eyes peeled from now on.

And that's all he wrote! That's it for me tonight kids! I'll be back real soon with more Geeky Goodwill Goodies! Until then, Happy Hunting!
Posted by Derek Ash at 9:48 AM