So it seems some days like I find more vintage kid's books than ANYTHING at Goodwill. Here's another pile I brought home from the Bangor, ME Goodwill. I'm going to do some posts in the future where I revisist some of the cooler finds I've made, and check out the interiors. But for now, let's just look and see what I brought home, shall we? This entire stack of books came home from one trip, and every book here cost me .99 cents apiece.

I'll start with this Space Hawks: Faster Than Light Choose Your Own Adventure Book from 1991. Apparently this was the first in 6 books that shared a continuity about space-pilots fighting alien threats. As with most CYOA I find, it looks fun and I plan on giving it a spin.


It wouldn't be a Goodwill Geek post without a handful of Little Golden Books, right? So here's the first one, an old Geography themed LGB that I bet parents FOUGHT over at the book stores back then because their child's Christmas would just not be complete without it. I bet thousands of Mall Santas got requests for this one.

It also wouldn't be a G.G. post without something from Sesame Street. Combined with LGB, this one is like a hurricane of childhood glee for me. This one loosely follows the events of "Follow That Bird".

One of the most exciting finds of this trip was this Insepctor Gadget Little Golden Book! I was disappointed to see there is crayon damage on almost every page of the book in varying degrees. I picked it up anyway because, hey... Inspector Gadget.


I also picked up this bizarro LGB-knock-off. It's from the line of Treasure Books. searching for these online, I believe the spine would have originally been in solid red. I don't know if mine is faded or peeled off. 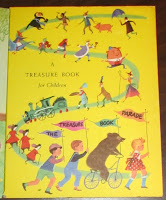 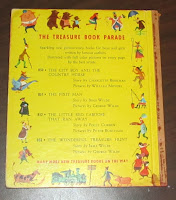 I always like finding weird knock-off brands of LGBs to go in my collection, like the Rand McNally Elf Book I found back in April at the same Goodwill.


Here we have a Transformers Big Looker Storybook from 1986. "Car Show Blow Up". It's a post Transformers the Movie tale, as it stars Ultra Magnus and Hot-Rod, and features Galvatron as the leader of the Decepticons. Basically the premise is that the Decepticons need to steal human technology from a car show to teach them how to build robots (???) to build a city for them. Not their most shining moment.

I'm not sure why ALF is wearing his shirt from the animated series on the cover of this book, because it is based squarely on the sitcom version of the character. It takes place on Earth where ALF spends the entirety of the book naked. And yes, there is a bit of romance between ALF and the anteater.

A Ducktales book! "Webby Saves the Day" is a weird, out of continuity tale where Scrooge's 3 nephews come live live with him and the Beagle Boys invade the mansion. And... well... Webby saves the day. 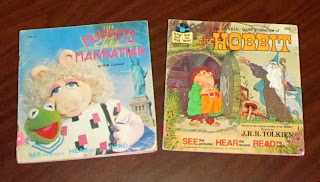 Here are a couple of books that originally included read-along albums to play. The Muppets Take Manhattan and the Rankin and Bass adaptation of the Hobbit. That's all I really have to say except that the Hobbit was a favorite of mine as a kid. I don't know if I saw it aired on TV or if we rented it... but Gollum made me terrified and I LOVED it. That is still the Gollum I will always know and love over the Peter Jackson version. And Piggy's sweater there is pretty terrifying too.


This was probably my ABSOLUTE favorite find of the lot. The Cosby show scrapbbook from 1986! It's full of interviews and behind-the-scenes stories about each actor and character. I remember The Cosby Show was THE show to watch when I was a kid. I remember the days when they played The Cosby Show and Family Ties back to back and that was the night I was allowed to stay up and watch both shows with my family. This was a wild find for me. Don't judge.

And finally, I know it's not a kid's book, it's a comic book based on a Horror property... so pretty much as far from kid's book as possible... but I got it in the same trip. The NOW comics Fright Night series! And for a change it wasn't priced 1.99! Just the same .99 cents as the other books I picked up. Still a little high for quarter-bin style comics... but oh well.  The writing and plot of this series were terrible, but that didn't stop me from loving them. We get to see Evil Ed in action as a vampire force to be reckoned with, and the resurrection of Jerry Dandridge! (Um... spoilers?) 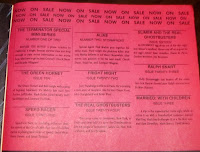 What I really loved finding were these ads for other NOW comics that I want to go back and find!!! Good ol' Ralph Snart!!! The Terminator? Married With Children? Green Hornet? Speed Racer? TWO different Real Ghostbusters titles? Bats, Cats, and Cadillacs? I'm there!

A pretty great set of books to bring home between Inspector Gadget, another CYOA, ALF, a cheesy Transformers books, The Cosbies, and.... -shiver- Ms. Pac-Man... I was pretty happy.

Welp. That's it for me kids. I'll be back soon with more Geeky Goodwill Goodies! Until then Happy Hunting!
Posted by Derek Ash at 12:58 PM