So today I'm tossing a bunch of different books under the Random Handful banner. This time around it's Science Fiction as the theme. 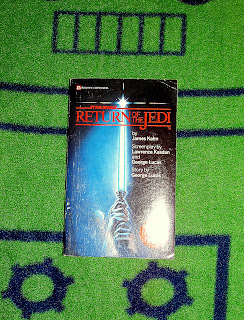 I actually found book three of the Star Wars trilogy for .99 cents at Goodwill BEFORE I posted about the Empire Strikes back novelization here! At the time I was still on the hunt for book #2... but if you haven't read that earlier post, spoiler alert: I got it. 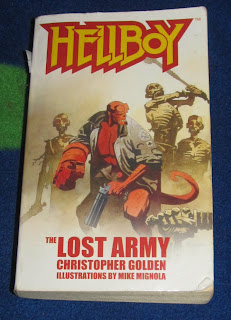 Honestly, I've never been a huge fan of Hellboy. I like the movies, and I've found all of the trade paperbacks of the Hellboy comics series second-hand, or on the cheap at Mardens... so I HAVE almost all of them... but I just haven't gotten into them yet. Hell, I even have an action figure from the animated series that I also have never seen. That doesn't stop me from continuing to pick up Hellboy books whenever I see them in hopes of someday loving them. So I got this Hellboy Novel, "The Lost Army" at Goodwill for .99 cents. 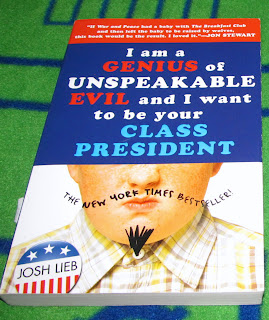 Ehhh... I don't know if you can EXACTLY classify this one as "sci-fi" but it comes pretty close... Right? It tells the tale of a middle-school megalomaniac super-genius who puts his goals of world domination on hold for a bit while he tries to win an election at his school, just to prove a point to his father. It turns out to be harder than he thought. Hilarity ensues. I really like the concept behind this book, and I hope it turns out to be a good read. 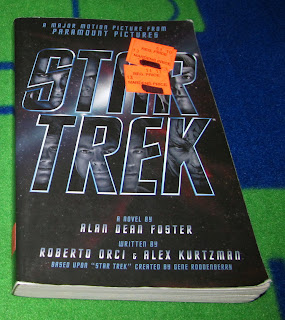 You can see Mardens price tags on the front of this book, but I did indeed pick it up at Goodwill. I probably overpaid however, because at Goodwill I suspect these were on clearance for .50 cents and I paid .99. C'est la vie. I am actually interested in reading a novelization of Nu-Trek. 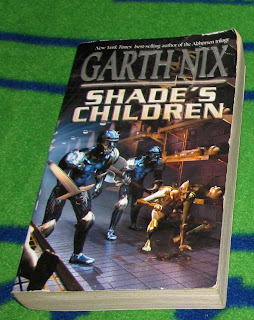 Garth Nix is hands down one of the authors I am most excited to track down and read more of. I love his Abhorsen series, and the Keys to the Kingdom series, and recommend them highly. I've tracked down almost all the books in the Seventh Tower series, as well as his book Ragwitch, though I haven't read any of those yet. Add another to the pile! .99 cents. 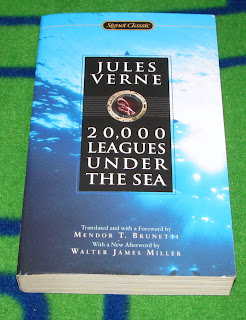 I've just been meaning to read this ever since I read Alan Moore's League of Extraordinary Gentlemen. I picked it up for no other reason than that. .99 cents. 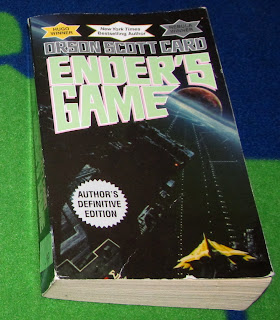 I actually thought that I had bought this book, Orson Scott Card's Ender's Game, at one point, but when I went looking for it, discovered I didn't actually own it at all... Jaime Hood over at Shezcrafti threatened to revoke my Geek Membership once if I didn't read this book at some point. I tend to take her threats more seriously than some... So the very next time I saw it at Goodwill I picked it up. Haven't read it yet... but it's only a matter of time now. .99 cents. 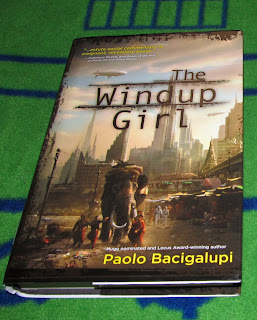 I had already seen a ton of super-positive reviews for Paolo Bacigalupi's "The Windup Girl" online before I discovered it at Goodwill. I picked it up for 1.99 and added it to my read pile. I guess it's a novel about the seedy side of bio-engineered slaves. Like that could have a seedy side. Described as "bio-punk" this book is extremely high-concept with a complete reinvention of how the world works bio-technologically in the 23rd century. It's another one my fingers are itching to turn the pages in. Steady fingers. Your time will come. 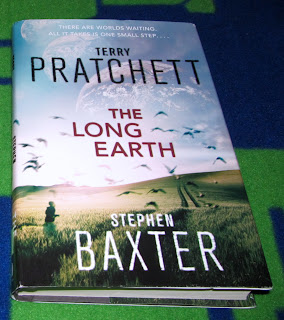 Picked this one up the same day as The Windup Girl (and a couple of other books I'll talk about during my upcoming Halloween Countdown... it was a good day for good Sci-Fi). Terry Pratchett and Stephen Baxter team up to bring us "The Long Earth" I was pretty much sold as soon as I saw Pratchett's name on the cover, and considering this is a collaboration, and a non-Disc-World book, I was intrigued. The book deals with alternate Earths, and travel between them. It deals with a pair of exploratory protagonists and the other Earths they explore. It deals with the way the world would react to the fact that there are suddenly millions of other Earths to expand out onto... and the sorts of dangers that might dwell out among those millions of potential worlds that would in turn discover us. I got this one for 1.99 as well.

Well that's it boys and girls! A Random Handful of Sci-Fi books I've picked up at Goodwill. I hope you enjoyed reading about my hopes to read them as much as I enjoyed writing about hoping to read them! I'll be back soon with more Geeky Goodwill Goodies! Until then, Happy Hunting!
Posted by Derek Ash at 7:52 AM