So... considering the so-called focus of this blog... this may seem kind of random... but I thought I'd show off some of my most recent TMNT scores.

I've never actually gotten around to reviewing the original 4 turtles that kicked off this line last year... and they're kind of mad at me about that... and I don't blame them one bit. ESPECIALLY considering the fact that they are some of my ALL-TIME favorite action figures-- nay TOYS in GENERAL.

But that ship has passed. I truly feel like so many people have GUSHED over them online that I can't say much more about them. I started off this post with a giant paragraph-long rant about my issues with the line as a whole, and the poor quality of some of the other characters released thus far... but I felt it was all just too... rant-y and pointless. 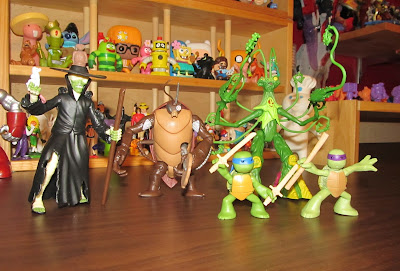 So without further ado, here are some of my most recent acquisitions from the new TMNT toy-line. 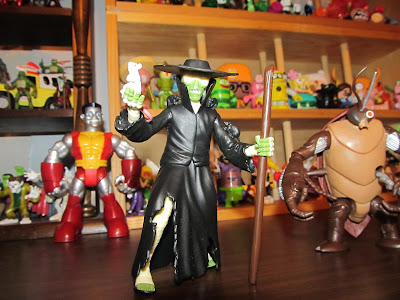 Here's the Rat King, a character I used to hate in the original cartoon series/toyline as a kid... but in the new show they play him up as a Phantom-of-the-Opera-Meets-Willard kind of psycho, and I'm all about that. And since he's voiced by Jeffrey Combs he's actually one of my favorite new villains on the show. I love the idea that he's only just marginally a mutant because he was dosing himself with tiny portions of the ooze to give himself psychic powers... but he's a mutant nonetheless. I'm pretty happy with the figure as well, although I would have liked the white rat to sit in his hand a bit better. His stance isn't impossible to work with, and his paint apps are simple but effective. He's creepy and probably one of my favorite figures in the line so far. 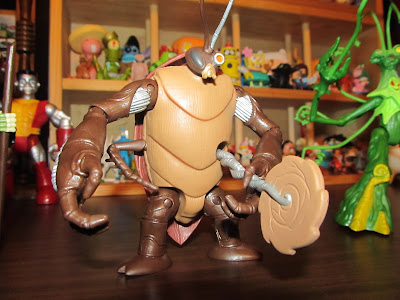 Next up we have Terminator Cockroach. I liked this guy's episode, but felt like he was a bit of a one-note character. The figure is IMMENSE and is much more the scale I would have liked to have seen Leather-Head in. It's not a bad figure, very nice details, but a little too brown to be very interesting. 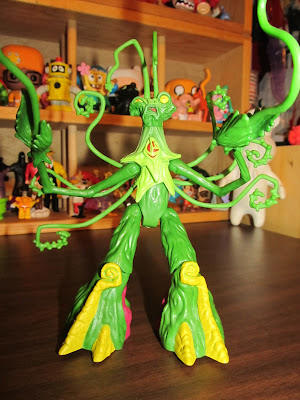 Snake-Weed here is pretty great. He's waaaay too small and I would have liked for there to be some "mega-sized" figures in this line, and Snake-Weed could have fallen into that category. 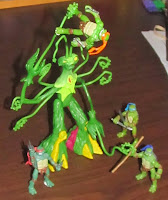 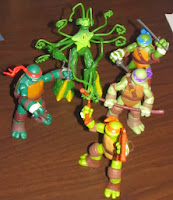 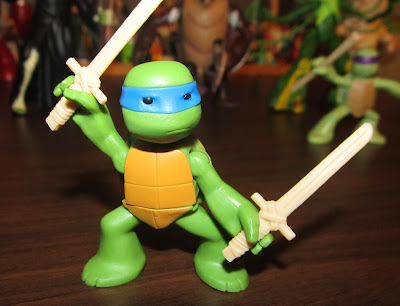 By FAR I think two of my new favorite toys from this line are these "Ninjas in Training" figures. Little Leo here looks so serious and determined, like he's ready to conquer the world. 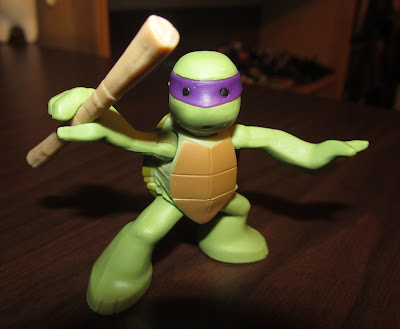 Little Donnie looks much less sure of himself... especially when he's facing off against Leo: 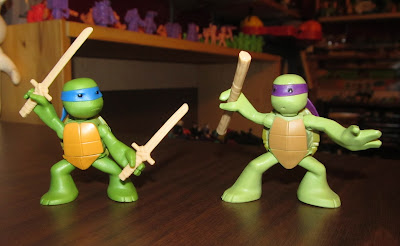 The figures are basic, but really fun, and if the facial expressions weren't so emotive I don't think I would have cared for these as much as I do. Back around 2004 or so I did pick up the "Toddler Turtle" 4-pack with all the turtles lumped together in it. It was the ONLY off-the-peg purchase I made from that entire line of TMNT stuff. I didn't like those as much as these... hence me no longer owning them. They were all too similar to really care about, and I didn't like that their masks went all the way over the tops of their heads. This version of the same concept is way better executed. I think maybe young Leo here is about to bite off more than he can chew though...