Another Trip to Dream Catchers

I recently made another trip into the Dream Catcher Antique Mall in Ellsworth, ME. And this time I found a handful of great old books, and a fun action figure find! I brought my handful of stuff up to the desk and the guy looks at what I have and just says:

I was prettyy happy because at least two of the items I had were marked at 4 dollars apiece. The other three things had no price, but I had assumed they would be priced similarly... so pretty much everything you see in this post cost me 2 bucks. I literally smiled, handed over a ten dollar bill, thanked the man, and took all this stuff home with me. 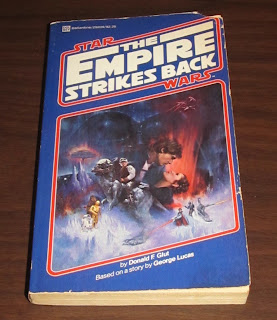 Ah. I finally found the second part of this novelization trilogy. It's been driving me nuts for a while now that I only have the first and third parts... and once I got this home I was able to slide this book in between those two on the shelf and let out a satisfied sigh. THIS is the reason why I collect stuff people. Just the rote lining up of things that need to be ordered and in complete sets. Aaaaand... because I like the stuff sometimes? I definitely love the first trilogy, and as I've mentioned recently, I'm getting a strange kick out of collecting movie novelizations now that I've found so many of them at Goodwill. 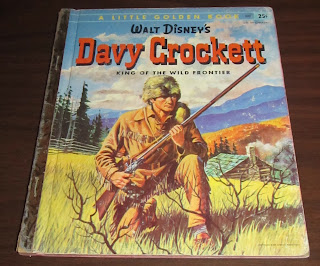 Whoah... What? Little Golden Books? Whaaaaaaat? Yep. I'm sure regular visitors will already be annoyingly familiar with the fact that I collect these. What makes these ones particularly special though? This is a first edition Walt Disney's Davy Crockett: King of the Wild Frontier! printed back in 1955 this book has that nice, brownish-gold ink on the gilded spine. I mean, it's not like it's worth much. I think the most it's going for on eBay is about 20 dollars. But still! This is a classic! And the older I find these books, the better. 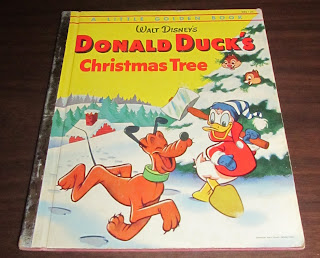 Here is a first edition Walt Disney's Donald Duck's Christmas Tree LGB from 1954! What I find really interesting is that Donald is chosen to replace Mickey Mouse, who co-starred in the original animated version of the tale "Pluto's Christmas Tree" two years prior. Nowhere can I seem to find any reference as to WHY that is. Donald is usually portrayed as the Chipmunks' nemesis... and Pluto is always depicted as Mickey's dog... so this is just all very confusing to me. 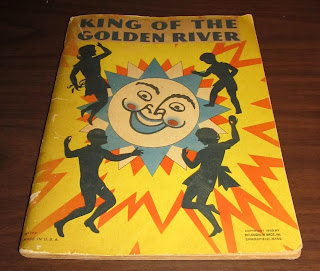 I don't know if you are familiar at all with this fairy tale (which is admittedly a Christian parable more than anything... but it reads like a fairy tale) by John Ruskin, but it was one of my favorite stories to have read to me by my grandmother as a little boy. I found this copy that was published in 1932 by McLoughlin Brothers Inc. marked for 4 dollars (but remember I paid 10 for EVERYTHING you see here... so I really got it for 2!) It's pretty much a kind of boy-Cinderella story where a boy named Gluck is being used as a house-keeping slave by his two evil older brothers. Gluck meets a mysterious magical benefactor in the King of the Golden river, who gives Gluck magical instructions on how to gain access to Treasure Valley. Of course, the evil older brothers find out, try to follow the instructions in their own crooked evil ways, fail tests of their moral fiber, and each in their turn are transformed into black stones for their troubles. Gluck wins out in the end, and all thanks to the magic of the King of the Golden River, and his own pure heart. Also, the illustrations by G. A. Davis are super cool, and just seeing them took me back to my childhood. I'd only ever seen this story printed in anthologies of other fairy tales, so finding it published in a single-story format was extremely exciting for me!

I think the absolute BEST find of this particular trip was this Michael Knight action figure from 1982! (Sorry for the terrible pictures... he seemed to be really difficult for me to photograph...)

Michael is articulated to pretty much just do ONE thing, and that is sit in a big plastic KITT car and drive around. Sigh. Unfortunately... there was no KITT to be found at the Dream Catcher Antique Mall. So... Michael will just have to go without.

Until I remembered this! I found this KITT at Wal-Mart on clearance down from 4.97 to 3.50! It's... well, it's not quite what Michael needs to make him feel complete... but It makes ME happy!

This was a pretty great handful of items for me to bring home for only 10 dollars! Overall, this was a great trip to the Dream Catcher Antique Mall as well, and I've already spotted some other, more expensive items that I may be picking up in the future if they're still there.

Well, that's it for me folks! I'll be back with some Geeky Goodwill Goodies in the near future, so in the meantime, Happy Hunting!
Posted by Derek Ash at 4:27 PM