Instead... let us reminisce:

I think I've mentioned on here before that Goodwill Hunting 4 Geeks would not exist if it were not for the League. I started this blog specifically so I could join up with this fantastic band of merry madmen (and women) and blah-blah-blah on about the things I love. I started it so I could infiltrate their ranks and prattle on about geeky movies and comic books, and action figures. Mostly to talk about the things I find second hand, and mostly geeky stuff from Goodwill...

...but mainly I just wanted to be a part of the community. I saw the connections being made through the League, and the camaraderie, and I wanted a piece of that action. I still feel like I'm a bit on the periphery (I'm more an Elastic Man or Red Tornado than a Batman or Superman) but I've made some excellent friends through the League, and participated in some great contests and gift-exchanges I would never have found out about if not for the League.

Some of my favorite topics-gone-by include the very first one I participated in: The League Road Trip. It was that particular topic featured over at the Green Plastic Squirt Gun blog that introduced me to the Bunny Man Bridge.

One of my personal favorite posts here on GH4G was one of the recent Pirates posts I did for Pirates week. I showed off my collection of cheap skeleton pirate figures and just went nuts describing their back stories. I love those little guys, and I felt it was one of my more fun and funny posts (IMHO).

Another personal favorite was the Christmas topic: Wishlists! It really gave me the motivation to think about what would actually be important for me to track down and collect at some point.

So to sum up: The League of Extraordinary Bloggers = Awesome. Happy Birthday!

2. Come up with a list of potential topics you would like to see as future weekly League challenges.

So with this Birthday, Brian is getting lazy in his old age. Suddenly he wants us to do his job for him. Sigh. He's like that embarrassing grandfather that sits around on the couch in his underwear and demands you make him sandwiches while he talks about is bowel movements. You'll do just about anything to get him to just... just stop.
So let's humor him shall we? Here in no particular order are my suggestions for future League topics:

More photo topics! Colors! They've done Green. That was before my time. I think it's time for blue or red or orange or plaid or whatever. More shelf expression! More themed photos in general! 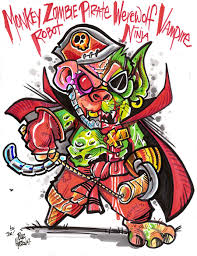 More conquests! Your white whales and holy grails! Your best finds! Your happiest collecting moments! Your most unbelievable deals! Your most horrible losses! The ones that got away! All the stuff you've bought at Goodwill! (all right, that one's a gimme).

I've got more but I'm keeping them close to the vest for now.

Here's what some of my fellow Leaguers are doing to celebrate the Birthday of the League!

- Achievements in Gaming
- Whatever I Think Of!
- Fortune and Glory Days

I'll be back soon with more Goodwill Goodies. Until then, Happy Hunting!
Posted by Derek Ash at 6:14 PM