This is it folks! The last entry in my week of Payday Friday posts detailing the scores I made when I went to Goodwill last Friday. 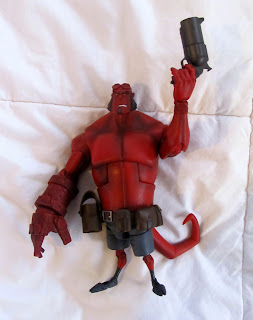 I'm starting out with the crowning jewel. I found this Hellboy Animated action figure (WITH BIG BABY) for 1.99. The only thing I'm missing is the base (which I can easily make/replace) to support Big Red's massive girth (those twiggy little legs are NOT load-bearing). I thought maybe I was missing a trench-coat as well, but apparently unless you got the special edition of this figure, he came without one. I'd like a trench-coat though. He looks a little naked without it. I paid 1.99 for this bruiser, and he's absolutely beautiful. He'll take his proud spot next to Buffy just as soon as I can get him standing. I can see him training that huge pistol on the winged skeleton I got out of the grab-bag on the same day. 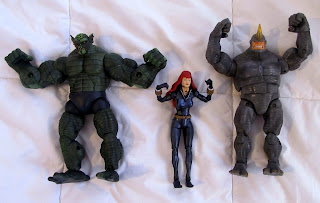 There was a pile of Marvel Legends figures, including some Spider-Men, Captain Americas, and even a Leader (Hulk villain) figure I toyed with (pun!) brining home. Ultimately I settled on these three. The Abomination and Rhino figures were 1.99 apiece, and Black Widow cost just .99 cents. I'm seriously considering just giving the two big guys to my boys to play with (they'll make awesome TMNT villains) but the Black Widow I'm keeping all for myself. Maybe she'll make out with Hellboy. 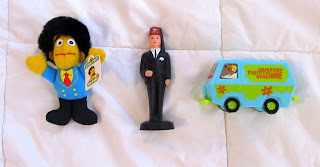 Here are just some loose random items I picked up for .99 cents apiece. I keep saying I don't collect bean-bag characters, but I also seem to keep coming home with them. Guy Smiley!!! How can you say no to a Guy Smiley mini bean-buddy? The stoic Shriner figure was just perfect weird. He needed to come home with me. And that Mystery machine is one of those magic rebounding pull-back toys that bumps into things and then starts going in reverse. 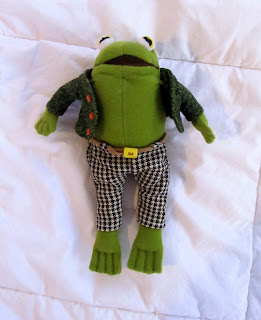 This is Frog from the Frog and Toad books. I love Frog and Toad. I searched for a Toad to go along with this Frog for like fifteen minutes. I brought home Frog for .99 cents, all alone. I am still looking for Toad. Don't judge me. I love children's literature, and Frog and Toad are some of my absolute favorite, most respected books for children. 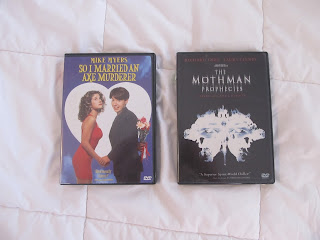 Second-Hand Cinema! I found a couple of DVDs to bring home as well! 2.99 a pop. "So I Married An Axe Murderer" is one of those movies I've kept meaning to pick up for years now, because I liked it so much. A pre-Austin Powers Mike Myers, still just throwing funny ideas at the wall. "The Mothman Prophecies" I remember vaguely being creeped out by, and honestly, I just thought it looked interesting. I know that there is a pretty steep divide between those who liked and those who disliked the movie (53% Rotten on Tomatoes) but I'm a sucker for cryptozoological/urban legend themed horror movies. 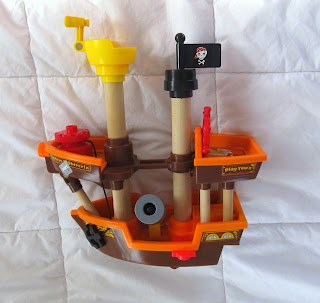 My boys own one of these Play Town (We're semi-made of wood!) Pirate Ships, but now I have one I can scrape the decals off of, and repaint to make into a pirate ship for these guys. I'll let you know how it goes. 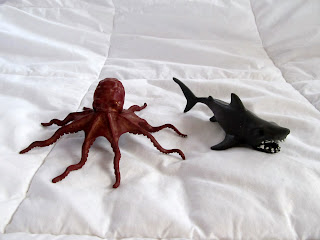 These two came taped together for .99 cents, and I will be using them to dress up that pirate ship. 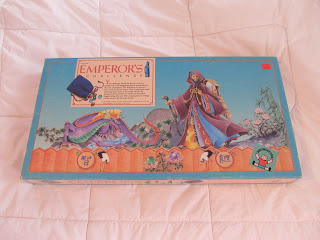 The very last item I have to share is a bizarre looking board game called The Emperor's Challenge. I haven't read the instructions yet, but there are princes disguised as old men, dragons, and scepters used as game pieces. There are a handful of different games that can be played with the set, and the rules are included for all of them. This game is gorgeous to look upon, and if it's awful to play I will at the very least put some of the playing pieces out on display. 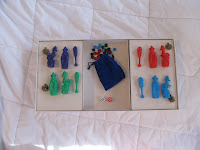 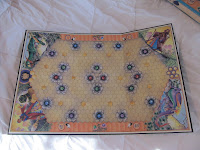 You can learn more (but not a lot more) about the game over at Board Game Geek.


So that's it! That is the full load I brought home from Goodwill last payday Friday. I'll be headed back to Goodwill this coming Friday, but in my heart of hearts I know there's no way I'll be coming home with as much fun stuff as I did on this one trip. For the rest of my Payday Friday scores, see Part 1: Little People Toys, Part 2: Grab-Bags, and Part 3: There's Always Books.

I've got some other fun stuff to share in the coming days, so keep your eyes peeled. I'll be back with more Goodwill Goodies soon. Until then, Happy Hunting!
Posted by Derek Ash at 1:49 PM