So, I went to Goodwill this past Friday when I got paid... and it was one of the best trips to Goodwill I've ever had. I picked up a lot of great stuff: some books, some DVDs, a board game, a couple of grab-bags, some action figures, and a handful of loose items I'm looking forward to sharing with you all. I'm going to milk this trip for all its worth and stretch it into a week of my Payday Friday finds. 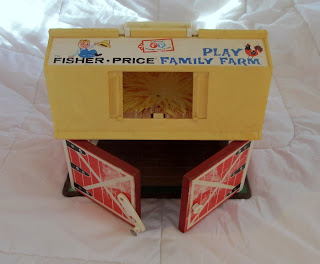 The absolute first things I found and started dragging around the store with me (until I went and dropped them in a cart) were a couple of Fisher-Price Little People Playsets. Granted: The first one is technically a "Play Family" farm, which is only different from "Little People" in that they called Little People "Play Family" when they were first released. The damage on the front of the barn doors is from packaging tape that was being used to hold the doors shut. There was some holding the loft doors shut as well. Why? Because there was stuff IN THERE. More on this later. 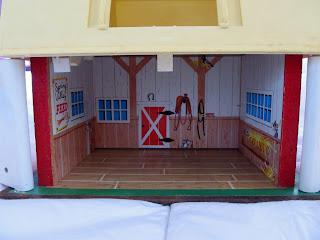 Here's an interior shot of the barn. Love the detail. There's saddle and tack for a horse on the wall, and a bunch of little critters running around in there!  A horseshoe hangs over the back door. 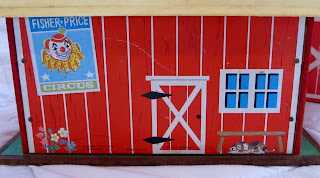 On the backside of the barn is an awesome poster for the Circus, a sleepy puppy, and the date : '67. Don't know if this is a production date or just a copyright, but I'm wishfully inclined to believe it's the production date. Other versions of this barn have a hard plastic base with a ramp into the barn, and no decoration on the floor. This one has a masonite base with a wood-floor deco. They stopped making the masonite base in 1978. So I know it's at least that old. 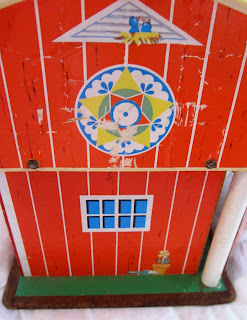 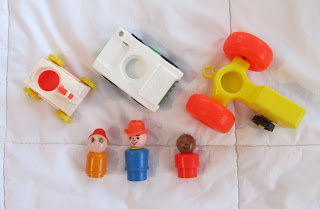 So now lets talk about what was lurking inside that barn. Here we have the Little People related contents. 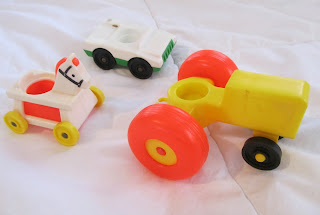 Vehicles. We have a child's hobby-horse (I was probably most excited by this find) a green car and a tractor. I already have a version of this tractor, with decals on the side, but with chew-damage to the front wheels. So in comparison, this one is actually in better shape than the one I already had. 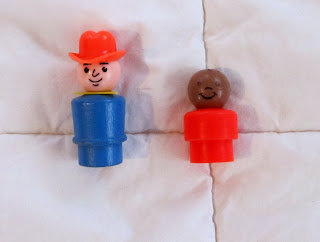 I was a little bummed that the only two official Fisher Price figures included were these two. Still, they were ones I don't already have, and I do like them. I didn't even notice it at first, but I discovered: 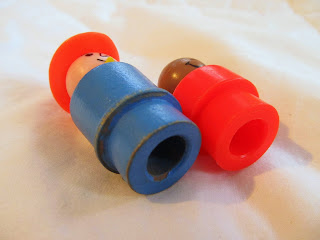 The farmer has a wooden body! I know some people don't like the woodies as much... but I love them. I love that they are a weird hybrid of the old original Play Family peg-style people, and the full plastic people that came later. Now... if this farmer with the wooden body and plastic head actually came with the farm... this means it could not have been produced more recently than 1975. 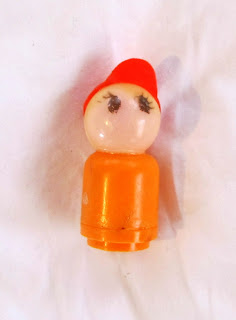 This I don't even know. I kind of like him just because I'm assuming he came included in some horribly cheap knock-off brand Little People toy set. I'm going ahead and deciding to like him because he's probably from the same time period. He's hideous, but I like how hard hes trying. 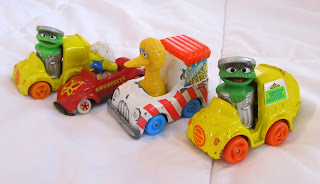 Also hiding out inside of that barn were these die-cast cars from '82. We have two Oscar the Grouches, driving "Grouch Trash Delivery" trucks, Big Bird driving a popcorn truck, and Smurfette, in a little red racer. These were a pleasant and unexpected surprise. 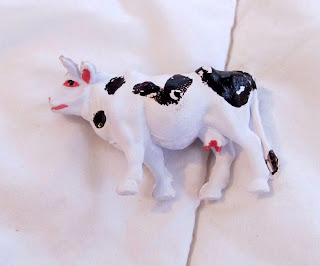 Also, there was this cow. So, the barn and all its contents ran me 2.99 total. Udderly awesome! 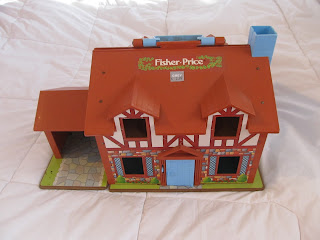 On the shelf next to the barn was this Fisher-Price Little People Play House. No bells no whistles, no accessories, which was a little bit of a bummer, truth be told... but LOOK at this thing! 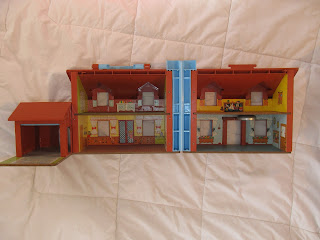 If you look closely at the interior you'll notice some damage to the walls: some bubbling and wrinkling, I'm assuming due to moisture. The doorbell still works though! And look at that kid peeking in the back door! Creeper. 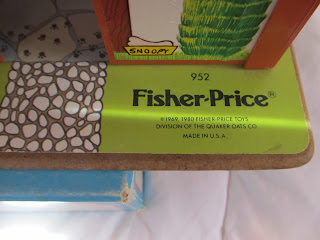 Again, not sure if the date on this is a copyright or production date, but I know again that the masonite based Fisher-Price Little People Play House in brown and white like this one was only produced between 1980 and 1986. And look who gets a bone! Snoopy! Look at his excited little paw-prints all over the stone floor of the garage! This house with no accessories cost me the same amount as the barn with all the stuff hiding inside (2.99)... but it was still worth it.

So... this just begins scraping the surface of Payday Friday. I still have so much more to share. So... I'll be back sooner than later with more Goodwill Goodies! Until then, Happy Hunting!
Posted by Derek Ash at 6:06 PM