Today I'm going to tell you about my last payday Friday, which happened back on the day right after Valentine's day. It wasn't as amazing as the LAST last Payday Friday, which was so epic I dedicated Not just one post... not just two posts... or THREE posts... but a whole week of four posts to it... but I still made a handful of finds that I was really pleased with just the same. I'm saving the very best for last... so if you're just here for the pretty pitchers, scroll on down to the bottom. 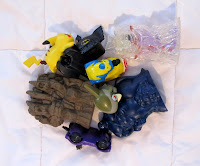 First off, I'll start with one of the 2 grab-bags I picked up. There was quite the mix in there for 2.99. You can see the whole pile here on the left, and a couple of Pokemon on the right (there were actually 2 identical Pikachus in the mix, but I forgot to include the other one.)

Then there were these 3 sets of Hercules Happy Meal toys. I've never seen the movie, and I'm not sure who everyone here is... but I think the blue guy is the centaur villain, and the other two shells are Titans... Zeus, Hera, and a satyr (wasn't he voiced by Danny DeVito or something?) I think I like the rocky two-headed Titan guy the best out of all of these. 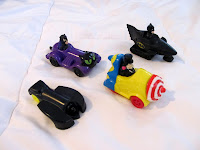 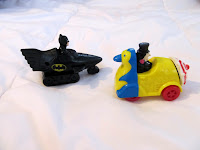 The reason this grab-bag actually made it home with me are these Batman Returns Happy Meal toys. There's only the front half of the Batmobile (which fires out of the back end) and the Catwoman toy looks like a hungry dog chewed the crap out of it (I already have one, luckily...) but the Batman and Penguin vehicles look amazing. I'm especially in love with the colors on the Penguin's car. The blue and yellow penguin and the hypno-umbrella on the front... It just does it for me. So when I really face facts, I spent the 2.99 on those 2 items alone. Not the best deal I've ever made... but considering I would have happily paid .99 cents for each of them had I found them separately, I only overpaid by about a dollar. 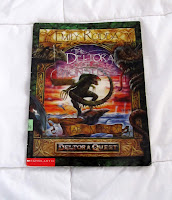 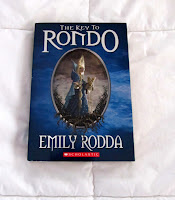 Here's a couple of YA books I picked up to check out. I've never read any of the Deltora books, but this is a compendium of monsters, which I just can't resist. The lush full color illustrations and pages packed with bizarre monsters just begging to be adapted for D&D... right up my alley. The Key to Rondo is a magical-world-accessed-by-some-weird-old-antique story starring some kids. I paid .99 cents for each of these. 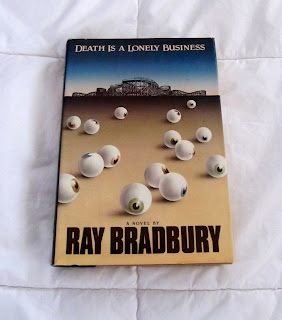 Here is another item I was particularly excited about. Death is a Lonely Business by Ray Bradbury in Hardcover was a nice  pick-up for 1.99. 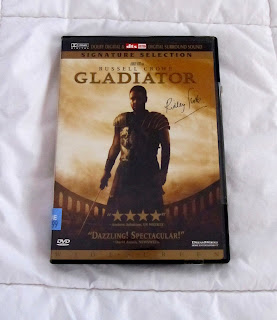 I can't even tell you how long I've been meaning to pick up this movie. So finding a copy of "Gladiator" at Goodwill for 2.99 was pretty spiffy. 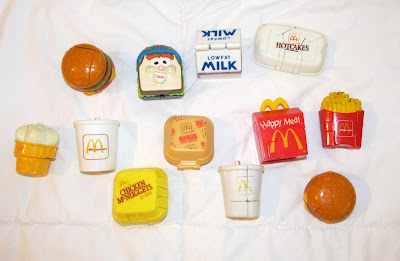 The last (and best) things I found on this trip to Goodwill were in this grab-bag full of Happy Meal toys for 2.99. And not just ANY Happy Meal Toys, but the transforming food toys from the late 80's and early 90's... "Changeables"!!! Some of these are robots, some of these are dinosaurs, and some of these... 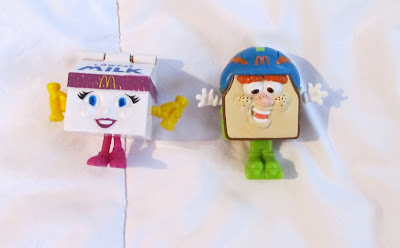 ...are just weird only semi-transforming anthropomorphisized food items named Milly Milk and Otis Sandwich, from the Food Fundamentals line... who appear to be promoting a healthy life-style you clearly won't have if you are eating at McDonalds... not really Changeables at all. 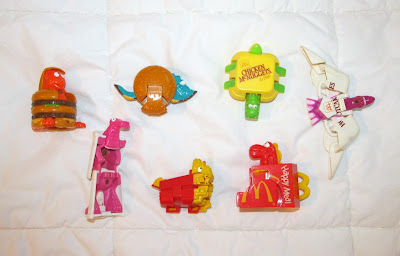 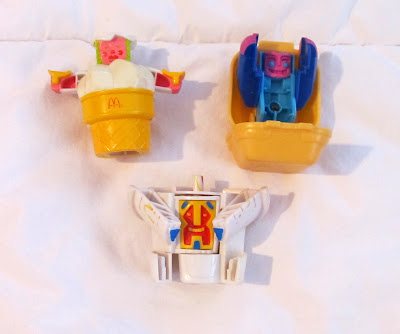 Here we have some of the McRobots... Turbo Cone, Gallacta Pounder, and Krypto Cup. I had already gotten a few of the toys included this grab-bag from a semi-recent transaction I made with Brian over at Cool and Collected. A couple of them I had on hand already, so all total I already owned about 5 of the toys I found at Goodwill on Friday... but 7 toys I actually needed out of 12 ain't bad really.

I plan on doing a post on my Happy Meal toys collection on here at some point very soon. These guys will make another appearance, and I'll feature the stuff I bought from Brian, along with some other stuff I had already, and/or found at Goodwill.

For now though, that's all there is to report for last Payday. Between the Batman toys, a new-to-me Ray Bradbury novel, and those McDonalds Changeables I was pretty happy.

I'll be back soon with more Goodwill Goodies! Until then, Happy Hunting!
Posted by Derek Ash at 5:46 PM