My stuff from Hake's Arrived!!!

So I may have mentioned in passing that I won a recent contest over at Cool & Collected. If not, let me explain: I won a contest for members of the League of Extraordinary Bloggers who participated in an imaginary shopping spree on Hake's Americana and Collectibles (Specifically Auction 209). The prize? Only a $100 shopping spree on Hake's web-site!!! Yeah boy!

Soon after finding out I won I giddily hopped over to the Hake's Americana and Collectibles web-site and started browsing. It did take me a little while to find things I was interested in among their for-sale stock. I didn't want to go the auction route, simply because I always like sure things more than maybe-things. I called Hake's with a list of item numbers, 4 in total, and spoke to the incredibly patient and helpful Heather.

Brian had suggested I call in my order, so that was the route I went. I am a complete basket-case on the phone, and as I stuttered through my order convinced that I would be reported as some sort of "When a Stranger Calls" style serial killer at any moment.

After placing my order, this instantly appeared:

Just kidding again! It was probably a couple of days. I don't remember. I was still in the fetal position after having to talk on the phone to another human being.

Let's cut the attempts at self-deprecating humor (and horrifying truth) and look at what I ordered shall we?
(I'm going to apologize ahead of time for the crappy quality of the pictures. I have been assured that this makes my blog charming, rustic and original. Not crappy like I thought.) 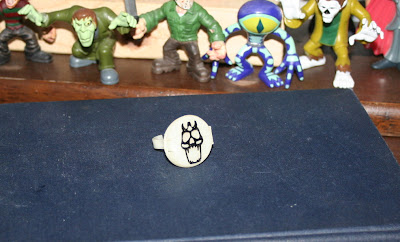 First up is the Master's of the Universe glow-in-the-dark secret compartment ring. I have these bizarre, vague and hazy memories of owning one of these at some point during my childhood. I remember things like it being too big for my fingers... and probably ripping the lid off the base at some point.

What I absolutely cannot remember is WHAT THIS CAME WITH. Can anyone help me? I desperately want to know what figure or figures had this ring included as an accessory. Had I not been spending my Hake's Free Money, this ring would have set me back 25 dollars. 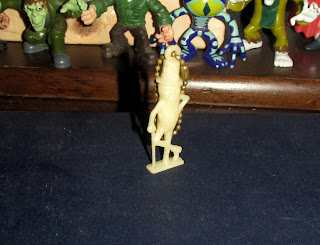 Next up is this Mr. Peanut key-chain/figurine. It's EXTREMELY hard (for me) to photograph. In this picture he looks like a semi-amorphous off-white silhouette of Mr. Peanut... but I assure you he has facial features and... stuff.

If you didn't already know, I LOVE Mr. Peanut. So this purchase was a no-brainer. Had I been "shelling" out my own simoleons instead of buying it on Hake's dime, I would have "shelled" out 24 dollars. (Get it? Like peanut shells? Puns!) 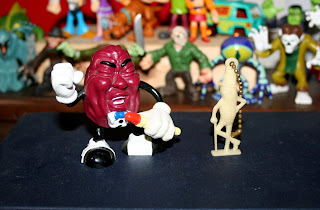 Here he is next to Tiny Goodbite for scale (whom I am now HORRIFIED to realize is incredibly dusty. Don't look at him! DON"T LOOOOK! I never CLEEEEEEAN!!!). I I'm such a ridiculous push-over for old food mascot characters. I think I just love the idea of anthropomorphically animated food items (actually ANY items) to the point where I want to own them ALL. 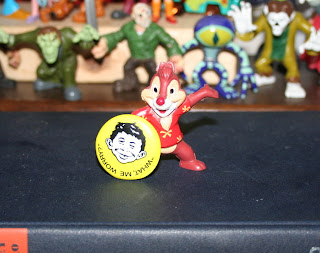 I also picked out this Alfred E. Neuman "What Me Worry?" pin from MAD magazine. I thought Dale would do a good job presenting this pin for the masses to appreciate.

As soon as I saw that iconic, gap-toothed grin I knew this pin MUST be mine. I would have had to lay down 10 cool dollars had Hake's not been picking up the tab. 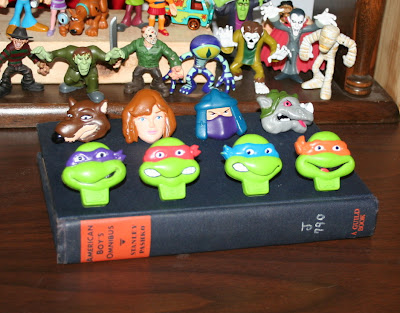 Last but certainly not least, I bought this set of Teenage Mutant Ninja Turtles "Power Rings" distributed in Canada as a Nabisco Shreddies premium back in 1990. I am so freaking excited to own these! Canadians get all the cool toys! Had Hake's not been FOOTing the bill, I would have SHELLED out a 35 dollar sum for these rings (I know I already used shell above for Mr. Peanut, but it was too good to resist... plus a foot clan reference! Puns!)

These are a great, iconic set of characters from the original cartoon. My only complaint is that they should have done Bebop and Krang rings and rounded the set out to 10. Where Rocksteady goes, Bebop MUST follow. It's pretty much the same (to an admittedly lesser degree) with Shredder and Krang.

I don't know why I felt the need to pose the rings next to the characters that they represent... but I did, and therefore you get these lovely pictures to look at. 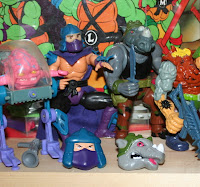 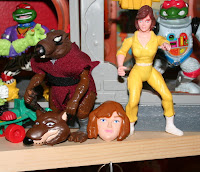 I do love the classic April O'Neil design from the old cartoon, but I have to be honest about her ring: Without all the other mutant animal characters (and Shredder) she would just be a weird nebulous floating head ring of a brunette. It's not exactly my favorite ring. I think maybe they could have traded her for Bebop. (Sorry if I'm perseverating on this whole Bebop thing... but it really irks me, even more than Krang)

Finally, I did not order this last button... Hake's threw it in for free with my order! They were already completely giving me a bunch of free stuff... and they just kept the free stuff coming!!! They really know how to treat a guy. I must not have creeped Heather out too much.


My entire order totalled out at 94 dollars. Heather then looked up the estimated shipping and told me that it would be exactly 6 dollars. This meant that everything, EVEN MY SHIPPING (down to the last cent!) was included in the credit I had won! Heather was all: "How on Earth did you do that?"
And I was all:

So this is the m entire haul from Hake's!!! 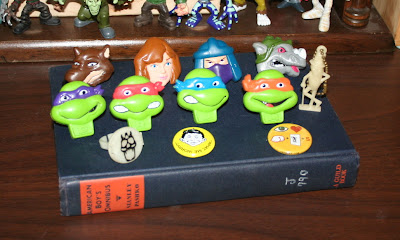 I want to say once more how incredibly thankful I am to both Hake's Americana and Collectibles for the prize money, and to Brian from Cool and Collected for running the League of Extraordinary Bloggers, and for making great connections with sites like Hake's. I genuinely enjoyed browsing through Hake's stock and dreaming of the things I would buy with unlimited moneys. Hake's has some truly amazing things for sale!

That's it for me tonight kids! I'll be back soon with some Geeky Goodwill Goodies! Until then, Happy Hunting!