Hey there Goodwill Geek fans! Today I want to feature some comic books I picked up a while back. First up is the three issue run of the first appearance of the "New Fantastic Four"! 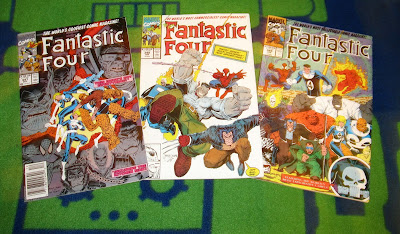 This was published back in 1990, and featured the original Fantastic Four being taken out by a particularly wiley, telepathic Skrull chick who sneaks into the Baxter building and picks them all off one by one. I remember looking at the issues in stores when it came out, and desperately loving the idea and WANTING this story, but I never actually buying any of the issues. Then lo and behold, I find all three of the issues tucked in with the kids books at Goodwill just a few weeks ago for .99 cents apiece. I'll tkae it for .99 cents! I've paid more for sooo much less, comic book-wise.

Of course upon reading this mini-event at home, I was struck by some observations: The story is... not... good. The humor is... not... humorous. The characters do... not... come off as cool together. And the Art Adams art? Kind of... garbled and... confusing in places. I was genuinely disappointed. But I feel like I own a coveted piece of comic book history, even if it's just because I REALLY wanted these issues as a youngin'. 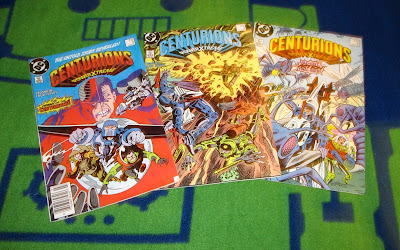 The next two sets of comics I picked up at a thrift store in Ellsworth, ME called Nice Twice. They have a small corner dvoted to piles of children's ephemera, including toys, books, and sometimes comics. I felt like a handful of issues based on some 80's toys properties were worth the .50 cents apiece they were asking. I was never a Centurions fan, and these comics haven't really changed my mind. What I remember from when I was a kid was that the figures all seemed really awkward and clunky, and had all these little pieces to lose. I remember the villain looking kind of weird and... wide? I guess? Like he'd be really easy to push over.

Again, these comics did nothing to disabuse this notion. Still, a fun set of old 80's comics based on toys... who can complain? 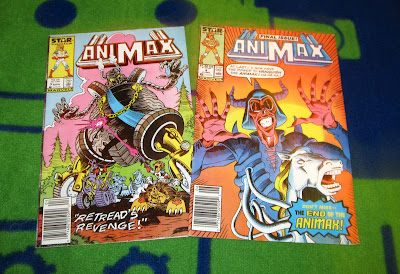 I was 100% sure I had never heard of AniMax before the day I found these comic books. The comics were completely INSANE and the character designs were just amazing. I just didn't remember this toy line one bit. Then I did some research online and found this: 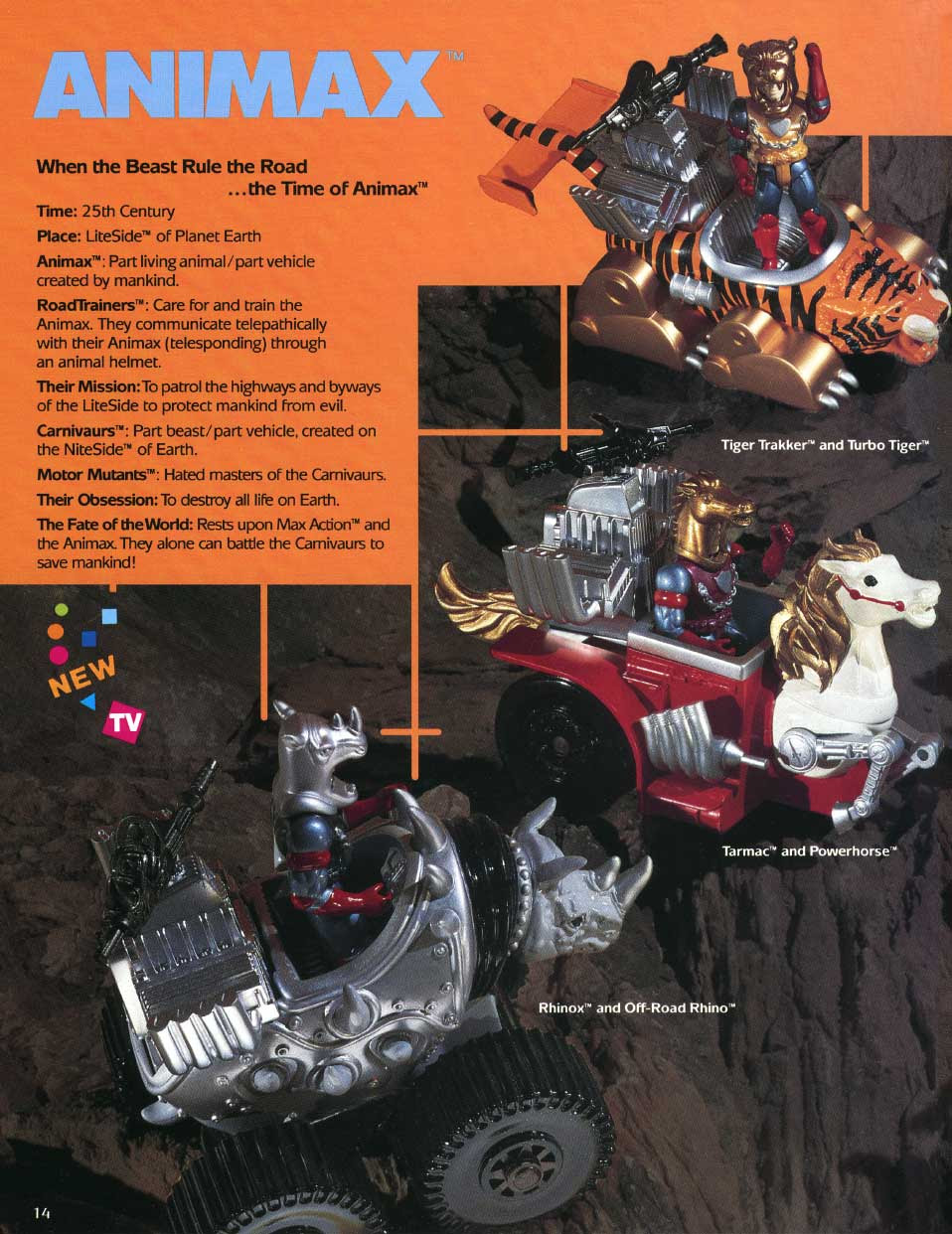 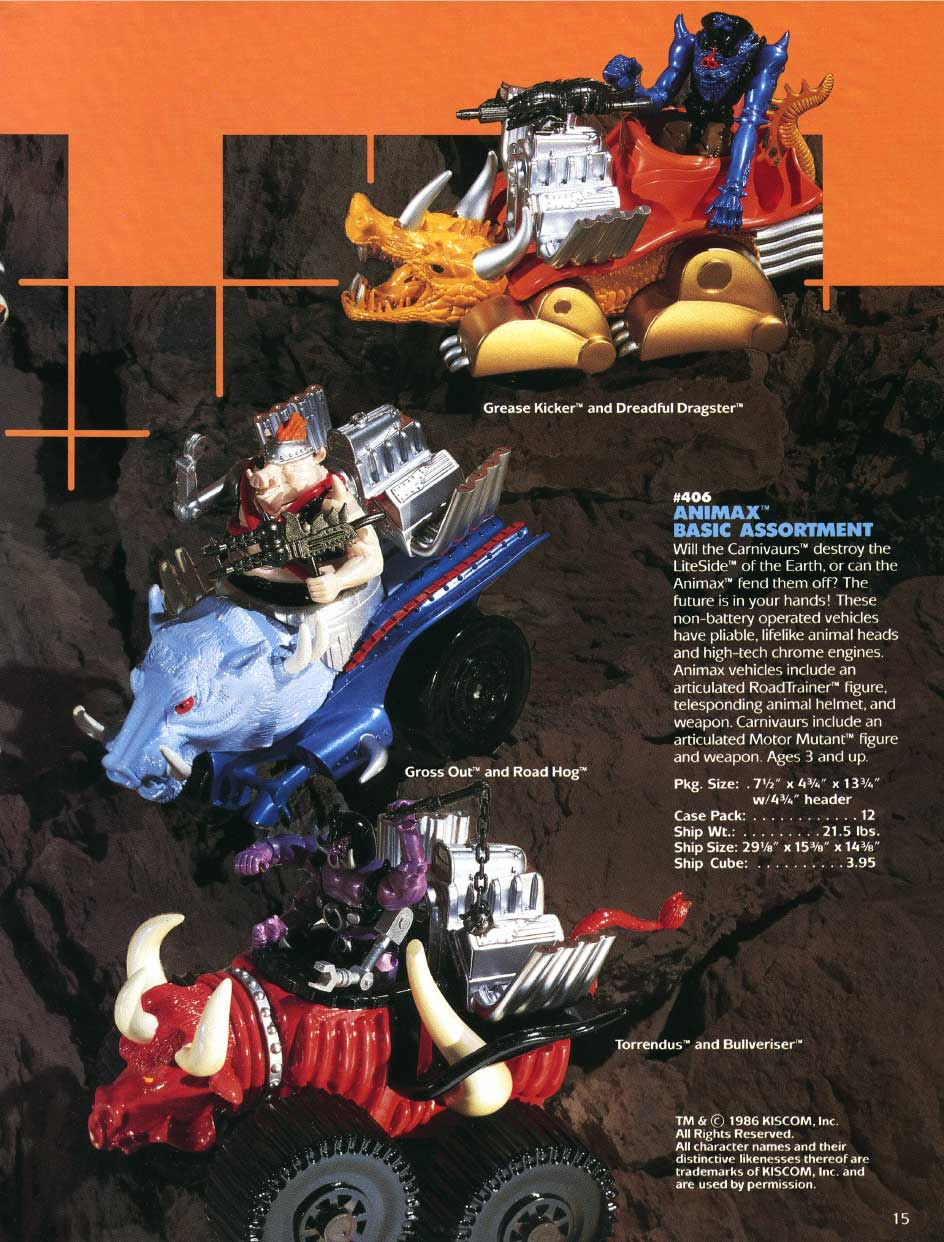 And suddenly some bells started ringing. I never owned a single one of these toys but I think I remember the commercials for them or something. I KNOW I would have LOVED a set of the villain action figures. I was never a serious vehicle collector as a kid, and that's probably why this collection eluded me. 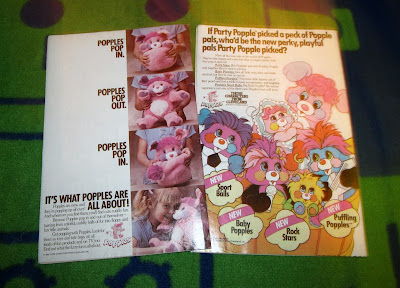 The real fun began as I started flipping through the books to look at the old ads included. Here's a couple of back-cover ads for Popples. I never wanted a Popple myself but absolutely every little girl my age that I knew had one. 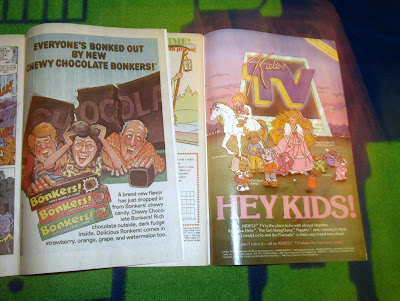 Remember Bonkers? I do! I would BEG for these things every time we went to the grocery store. Know how many times I got them? Exactly zero times. Zero. I never got any. Yeah. And then on the right side there we have an ad for the Kideo TV series of cartoons, all based on American Greetings properties. I remember seeing exaclty ONE of these cartoons: The Get Along Gang, which I LOVED. 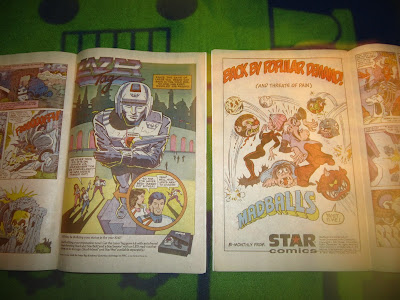 Here are some ads for Lazer Tag and the Madballs comic book. Two of the most ubiquitous properties of the 80's here immortalized in comic book form. I was such a Mad-Ball zombie that I owned ALL the comics, a LOT of the Madballs, and then the complete set of Madballs action figures and the Madball Roller-Cycle. I didn't own lazer-tag but DESPERATELY wanted to. 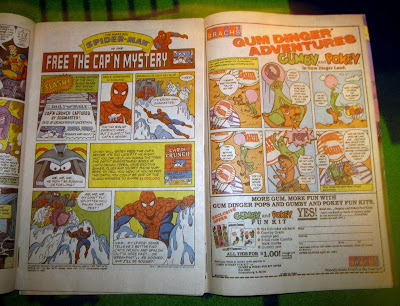 Here are some great comic-strip style advertisements starring Spider-Man v.s the Soggies for Cap'N Crunch, and Gumbi and Pokey for Brach's lollipops. In the same vein as the famous Hostess ads starring ridiculous villains just crazy for pie, these tell some semi-exciting stories involving famous characters and food. 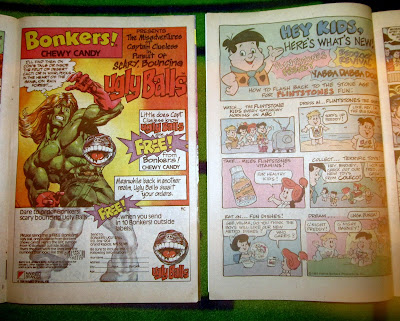 I loved Madballs but was TERRIFIED of the Ugly Balls in this print ad. You could get one mail-order from Bonkers candy. And The Flintstones kids!!! Check out all of the semi-mediocre crap you could get back then that had the Flintstones on it!!! 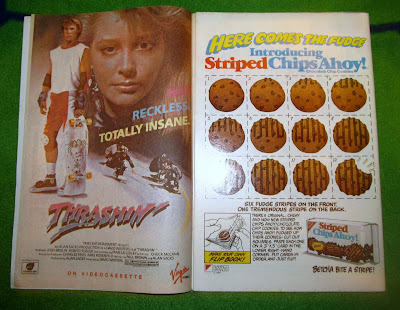 I do not remember a movie called Thrashin' featuring Josh Brolin. But I wish I had LIVED it. It looks amazing. And oh my heavens STRIPED Chips Ahoy! I DO remember those. 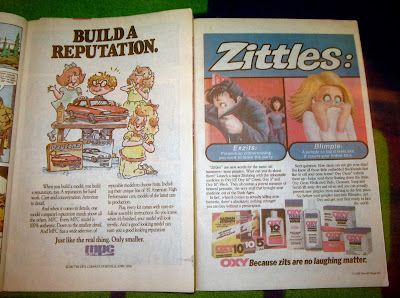 And finally a couple of fun ads depicting the 80's social scene. This geeky kid is getting all KINDS of tail thanks to his... model car kits? I'm... I'm not sure about that. That can't be right can it? And there on the right is an OXY ad featuring teenagers so disfigured by acne that they cannot show their faces in public. Plus a couple of new Webster's terms for the types of acne they are suffering from.

Well. That's it for me tonight kiddos! I'll be back real soon with more Geeky Goodwill Goodies! Until then, Happy Hunting!
Posted by Derek Ash at 4:58 PM