A Random Handful of Goodwill Goodness

Just a quick one today, kids. 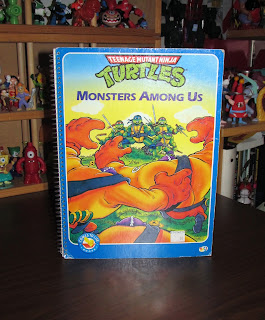 I found a group of these books where there's a handheld device you push against record-like discs on the pages to play sounds. They're called "Comes to Life Books". There was an Alvin and the Chipmunks book that I almost picked up as well... but I've never been a huge Alvin and the Chipmunks fan to be honest. This one cost me .99 cents, and if you can't tell by the picture already is a Teenage Mutant Ninja Turtle book: Monsters Among Us. (Here is a link to a youtube video of someone using the device that works with these books on a different TMNT book. For some reason I couldn't embed)
I don't have the device required to activate the sounds inside the book. And... the story ain't that great... but it's TMNT and I like the weirdness of the gimmick even if I can't make it work. 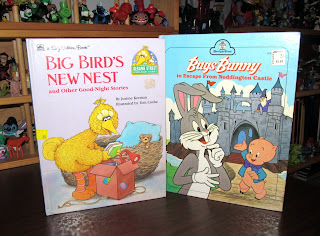 Here are a couple more licensed property books. These ones are just regular books. I pretty much pick up any old Sesame Street books I find, and the Bugs Bunny book is one I had a kid about a castle adventure. Love old books like these where the aesthetic is just so... yesteryear. I know that sounds weird considering both of these books came out in the 80's... but YOU CAN TELL they came out in the 80's you know? They have that feel. That look. That... taste. I DID NOT TASTE THEM. 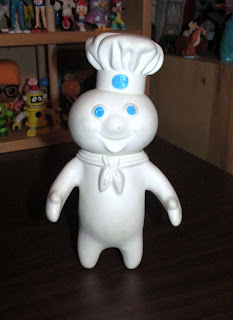 Last of all, I found this rubber Pillsbury Doughboy toy for .99 cents in a random bin full of bean-bag characters. NEVER underestimate the stuffed animal bins you guys!!! Dig deeper! That's how I found my Galaxy Force Starscream AND my Crackhead MadBall. Both of them were buried under discarded plush animals as well. This Pillsbury Doughboy is pretty interesting. The date on the back of his head reads 1971. Everything I've seen on Google encourages the idea that this is in fact his legit production date. He does not stand freely on his own, and apparently he originally came with a stand that his legs fit down into to keep him upright. He ALSO had a little lady friend... and a kid... and a puppy!?!?!?!

Color me stunned and amazed.

Well, that's it for me tonight guys! I'll be back soon with more Geeky Goodwill Goodies! Until then, Happy Hunting!