It's All about the Golden Books. Literally.

The following post contains no less than 29 Golden Books that I found and bought at a handful of different Goodwills. If... you are not... obsessed with old Little Golden books... sit this one out. Up front, every single one of these books cost me .99 cents apiece. I don't want to have to mention it over and over again. It's hot out okay? All of these books were purchased in fits and spurts since the weekend just before Father's day. So they accumulated fast. These don't even make up half of the books in my LGB collection. I'm sort of embarrassed admitting that... but it's sort of freeing as well. First up we have a Tiny Toons Adventure book, a vintage Little Mermaid book, and a Mickey Mouse and the Mouseketeers Ghost Town Adventure. I love all the old stories starring Mickey Mouse and his awkward gang of Mouseketeer buddies. I had a HUGE crush on Ariel when I was a kid... so owning this book is like finding a photo album full of pictures of an ex-girlfriend. Except different. 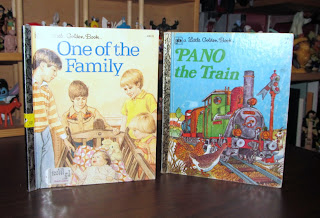 A couple of just sort of random 80's titles here... One of the Family and Pano the Train... I have nothing to say about them at all. They are just the sort of random, older LBG's that fill out my collection. 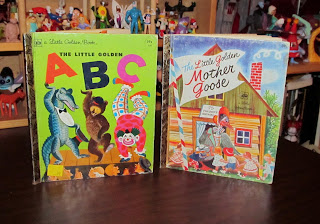 These two are just reprints of much older titles, but I love the colorful designs and old-style feel of them. I'm pretty sure I owned a copy of the The Little Golden ABC... but not the Little Golden Mother Goose. Now you think you know me? You don't know me. I've done things. Terrible things. 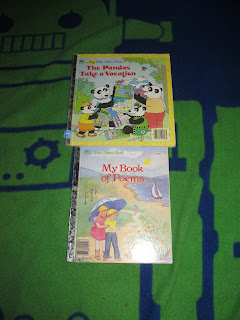 Here's another of those awesome BIG Little Golden Books. It doesn't matter what the topic material is, if I find these I pick them up. They're just so weird. I'm showing it next to My Book of Poems for scale. The Pandas Take a Vacation is actually a bizarre tale of a... Panda family... taking a vacation... It sounds less bizarre when I'm trying to describe it... but there's a weird sense of unease underlying the entire tale like they're going to meet a serial killer or something at any moment. They didn't... but you know what I mean? 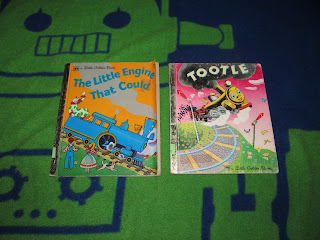 I can't even begin to tell you how much I AGONIZED over buying these two reprints of old Train stories. I just kept arguing with myself over the fact that this was not like a SPECIAL printing of Tootle in any way... but I don't have a copy of Tootle in my collection at all... and oh my GODS I finally get why people hate blogs about people who collect old crap from Goodwill. The cover to The Little Engine That Could is straight up peeling off. But I couldn't leave it behind if I was going to bu Tootle. You know? 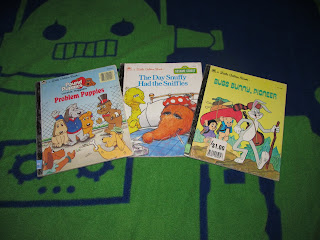 An assortment of licensed properties here... Pound Puppies (the second P.P LGB in my collection... just FYI... ACRONYMS!!!) Sesame Street and Bugs Bunny. I have distinct memories of the Bugs Bunny book from when I was a kid. 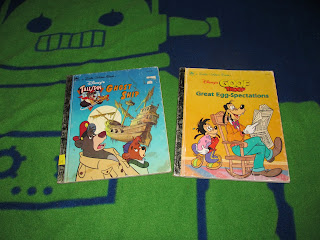 A pair of Disney Afternoon books!!! I was never a Goof Troop fan at all. I felt like they were just grasping at that point for SOMETHING-OH-GOD-ANYTHING to keep the line-up going. But Tail Spin? That crap was GENIUS!!! It turned The Jungle Book into an Indiana Jones inspired drug trip where the whole world is airplane themed. When I watched this as a kid I didn't question the logic one bit... but what Disney exec green-lit this show? One daring sumbitch. 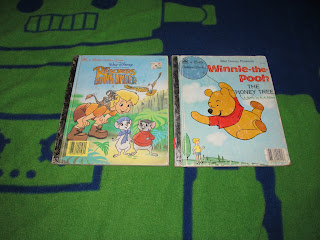 Rescuers Down-Under and a Winnie-the-Poon and the Honey Tree book. I liked Rescuers Down Under... but I pretty much loathe the Disney Pooh stuff. But... this looked old enough and it's so poorly illustrated (look at that crappy rendition of Pooh on the cover!) that I felt like it represented the Disney Pooh franchise without selling out to it too much. You don't even understand the disgusting number of Disney Pooh Golden books I fling away in disgust while I am pawing around at Goodwill. I treat them like they are deadly vipers made of fiber-glass insulation. I earn me some looks while I'm shopping sometimes. 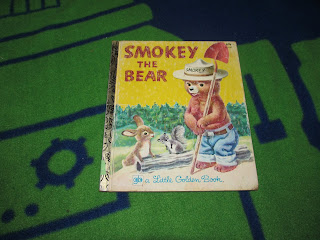 This is one of the real treasures I discovered recently. I owned and LOVED this book as a kid, and was so incredibly excited to find it that I probably let out some sort of audible squeal. I remember flipping through the pages OVER and OVER again... and there were some very specific pages that always drew my attention: 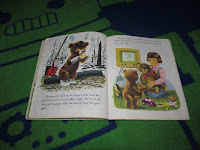 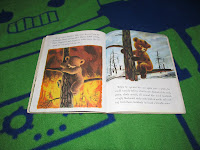 The pages depicting Smoky getting caught in the fire and then convalescing afterwards were my absolute FAVORITE pictures in this book. I think I was just a macabre little kid... but all kidding aside I think all kids kind of obsess over the most emotionally distressing parts of any books, movies, or TV shows they are exposed to. I think I was just terrified of being that little bear in the fire, and with the bandages on, swept away from his family. This is all getting really deep. I need a break. 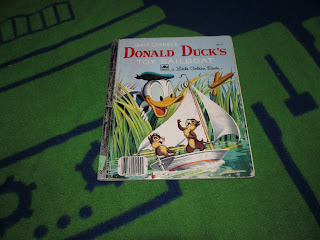 Next up is another awesome book that I loved as a kid. Donald Duck's Toy Sailboat is one of the reasons why I loved Chip and Dale as early on as I did. The old Christmas cartoon where they inhabit Mickey's Christmas tree and have to fight off Pluto is another reason. I was pumped and primed when Rescue Rangers came on the scene. This book tells the tale of C&D taking Donald's model boat out for a joy ride. 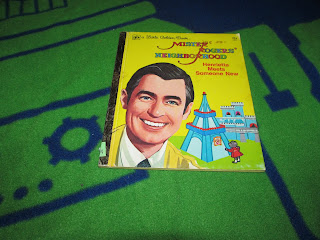 THIS was a particularly AMAZING find as well... A Mister Rogers' Neighborhood LGB!!! Check out the interiors: 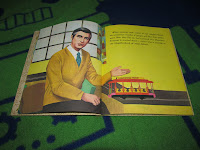 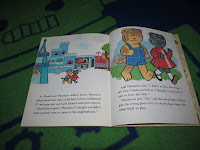 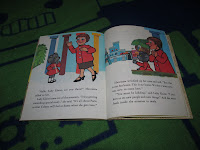 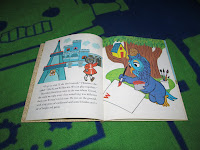 Seeing all of the classic Land of Make-Believe characters WITH LEGS is a little bit freaky. I have to admit... Lady Elaine has some nice gams. 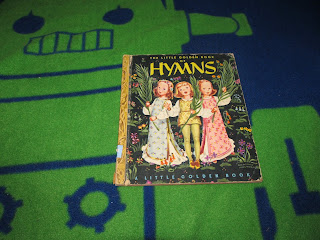 I tend to avoid any kind of religious themed LGB's. But this one was too damn old to pass up. It is a first edition from 1947. It's pretty beat up but just beautiful to behold. 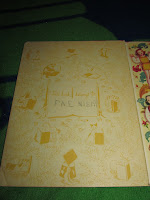 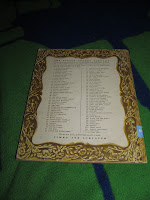 Because it's a religious book it burns a little when I hold it.

And to wrap up, here are some random Disney LGBs (Donald Duck: Some Ducks Have All the Luck and Wreck It Ralph) paired with a couple of My First Little Golden Books... oddly both about trucks... The Truck That Drove all Night and What Kind of Truck? 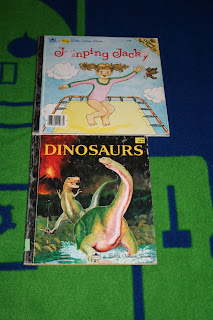 And finally just to prove that I really WILL buy ANY Big Little Golden Book, I picked up Jumping Jacky... not to be confused with Jumpin' Jack Flash. Totally different. I checked. Also this AWESOME LGB about DINOSAURS!!! from the 80's... back when they still thought there was such a thing as a Brontosaurus. Sigh. I miss those days. Back when Brontosauruses and Plutos still roamed the Earth.

I hope you enjoyed taking a bizarrely in-depth and yet still rather stilted and sketchy look at a TON of old Little Golden Books I've recently added to the pile. Actually... I like 'em and that's all that really matters to me. You all run your blogs how you see fit and I'll do the same. :)

That's all for me tonight! This damn post took me more than a day to complete! So I will indeed be back with more Geeky Goodwill Goodies, sooner rather than later... and there might just be some toys to blog about coming up! Until then Happ Hunting!