Welcome to another League of Extraordinary Bloggers post! What's the topic this week? Let's have a look shall we?

It feels like the first time…
Write about your first experience with something.

I believe it would have been late 1985. That would have made me 7 years old at the time. I was at a birthday party being held for a kid I didn't like very much... but our Mom's were friends, so it was a sort of obligation to attend. At 7 I didn't really care one way or another I guess, as long as I got some cake and some party favors... But I just REALLY didn't like the kid who's party we were at.

I was ready to write the entire party off as a loss until we got to go sit at the table to watch him open his presents (I remember he got a Prince Dargon with Dragonflyer which I was insanely jealous about. A**HOLE!!!) and on the table there were these wax-wrapped packages of trading cards:

Garbage Pail Kids!!!
This was the very first time I had ever even HEARD of GPK, much less actually laid hands upon them. The kids around the table all seemed to know all about these things already, so I was the only one who was struck dumb by the cards inside:

Out of all the GPK's I would eventually own, these 5 stand out as my very FIRST. I was immediately struck by how detailed the artwork was. At 7 years old I thought these were almost eerily beautiful (although I wouldn't have had those owrds in my vocabulary to describe them). And looking at them subjectively as an adult, I honestly do find the artwork kind of beautiful. The artistry is there. You can tell artist John Pound put a lot of love into each piece.

From those hideous wrinkle's around Seth's mouth there, or the multi-colored shading on Janet's skin... can you blame me for falling in love at first sight? After that birthday party, I would walk a couple of blocks down to the local convenience store any time I found enough loose change to buy another pack. I remember tearing those packages open on the way home and poring over every detail carefully, almost trying to memorize every character's features. I never had binders and card sheets to keep them protected in (and probably wouldn't have done so even if I had them...) but I did keep them in one of these:

An old zipper bank bag that my grandmother gave me to keep them in. I lugged that thing around everywhere!

And so started a life-long romance with GPK, from: 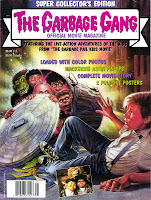 The Garbage Pail Kids movie!!! And there was a magazine they put out that I ALSO dragged around EVERYWHERE when it came out. I LOVED this movie and the magazine when I was a kid!!!

And of course Garbage Pail Kids were simply a gateway item... leading to obsessions with things like:

MadBalls! (those Characters from Cleveland were another HUGE love of mine as a kid) And...

Teenage Mutant Ninja Turtles (The weirder and grosser the villains were, the better in my opinion, and Play-Mates was feeding that need!). And it indirectly got me started on the path to comic books by getting me interested in magazines like:

So it's pretty obvious that the Garbage Pail Kids had a pretty heavy influence on my development after that first exposure.

Let's see what the rest of the League is Blogging about!

- Chrisloc1701 from Random Nerdness takes us on a tour of his first memories of the Happiest Place on Earth!

- GI Jigsaw shares TWO incredibly cool memories. First trips to two of the most formative locations in ANY self-respecting geek's life. I love his choices!

- But I think Erik Johnson, Illustrator shares some of the most personal and beautiful "firsts" so far.

- The Trash Man over at Pop Pop! It's Trash Culture features an old comic that I WANT.

That's it for me today kids! I'll be back soon with some Geeky Goodwill Goodies! Until then, Happy Hunting!
Posted by Derek Ash at 12:31 PM