So I took it upon myself recently to order myself some geek-tastic wares from some of the internet's geekiest vendors. These include The Strange Kid's Club and October Toys.

Today I'm just going to focus on what I got from the Strange Kids Club. What did I order? Well let's take a look-see shall we? 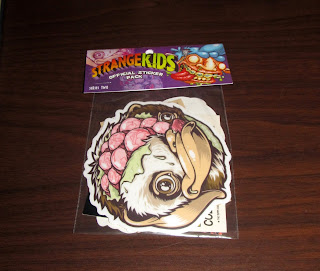 The first thing I ordered from the Strange Kids Club was their "Strange Kids Official Sticker Pack: Series Two." Series one was completely sold out, or else I would totally have picked that up too. I tore this poly-bag open post-haste and spread my booty-loot out to examine it better. 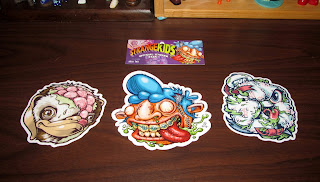 First up are the featured stickers in the set. These are three MadBalls-like caricatures of Strange Kid and a couple of 80's pop-culture icons. 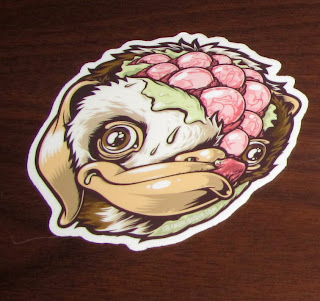 Representing Gizmo from the movie Gremlins is the Kevin Luong designed "Mogwad". He is literally BURSTING with fetal mogwais as if his head has just been exposed to water, and it is splitting open his skull in a frantic bid to let his offspring out. Plus, he's picking his nose with his tongue. Classic. 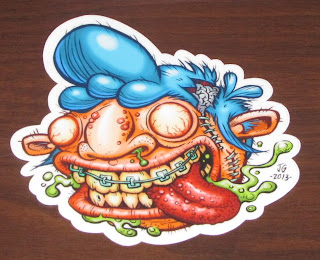 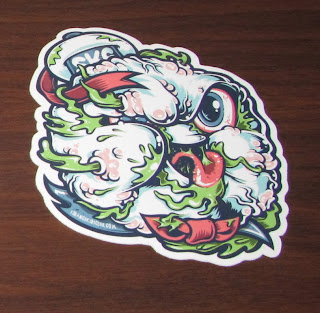 Representing the Stay Puft Marshmallow Man from Ghostbusters is "Stay Puss" also designed by Kevin Luong. With a face only Gozer the Gozerian could love, Stay Puss looks like a marshmallow that's gotten a little bit toasty/melty... and a little bit contaminated with biohazardous ecto-plasm. Would you have him any other way? 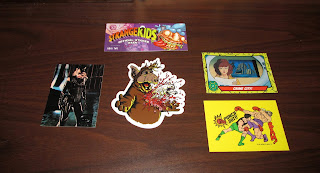 Also included in my sticker pack were these collector's cards and a sticker from the Series 1 sticker pack! The Punch Out and TMNT cards were appreciated... but the Catwoman card from the Batman Returns series is by far my favorite. She's going to be displayed somewhere prominently. Let's take a closer look at the series 1 sticker: 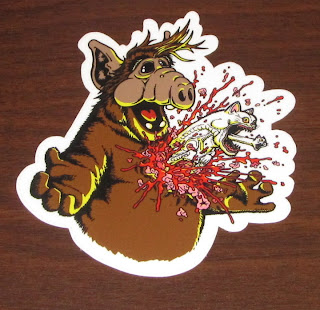 This sticker is called "Melmac Attack" designed by James Callahan. It's from the Strange Kids Club Official Sticker Pack: Series One. They threw it in as my "random" sticker. I just wish I could get my hands on the other three stickers from series one somehow! 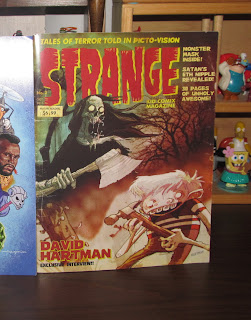 Finally, I ordered two issues of the Strange Kids Comix Magazine. They are sold out of issue #1, but issues #2 and #3 were in stock, so I snapped them up! #2, pictured above, is Halloween themed! The comics are short but fun, and in several different styles. There was also an interview with cover-artist David Hartman, who is also a powerhouse in animation apparently. This completely reminded me of old magazines like MAD and Cracked, and it was well worth the purchase price. 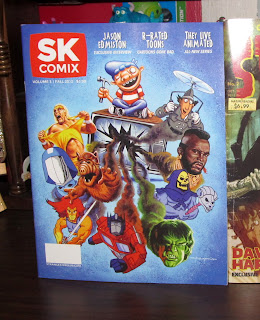 Issue #3 is dedicated to classic 80's television (mostly kid's shows) as you can probably tell from the cover. There's a mild TV Guide-parody feel to the cover and first page or so, but again, this brings back memories of MAD and Cracked. The interview with Jason Edmiston is great, but I think my favorite piece is a Ghostbusters vs. Beetlejuice crossover comic that ends up spilling into Pee-Wee's Playhouse. If that's not enough to get you to buy right there, this is not the magazine for you. 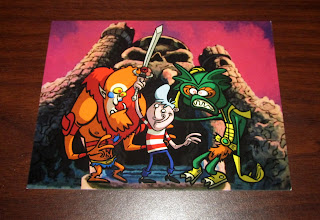 Tucked into one of the magazines was this postcard drawn by Nigel Ward, depicting Beast Man, and Mer-Man standing in front of Catle Greyskull with Strange Kid as he brandishes... the Sword of Omens? This was an awesome little surprise to find, and it topped off the whole package perfectly!

Well, I think that about wraps it up. I'll be going over the stuff I got from October Toys very soon, so keep your eyes peeled. I'll also be back soon with more Geeky Goodwill Goodies! So until then, Happy Hunting!
Posted by Derek Ash at 5:20 PM