Welcome back! I've been lazy, I'll admit. Completely slacking off. I don't usually let the blog rest this long, especially with Halloween less than 100 days away now, and so MANY posts still cluttering up my reservoirs. So without further ado, let's take a look at a load of stuff I brought back from a trip to Goodwill awhile back. 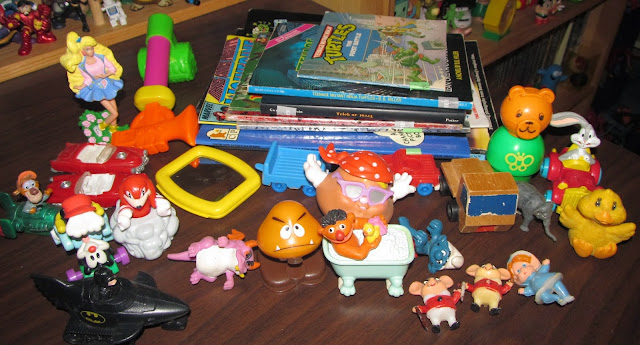 Here's the obligatory group shot, but say it with me kids: Let's take a closer look, shall we? 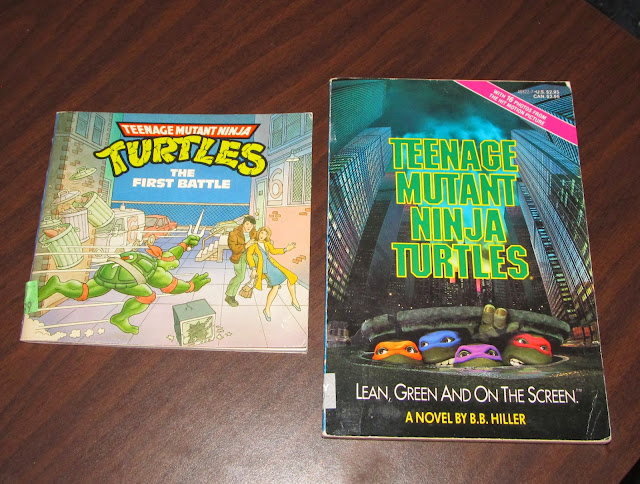 First up, here are a couple of Teenage Mutant Ninja Turtles books, both based on the 1990 movie. "The First Battle" is interesting because it tells the first third of the movie with the cartoon-versions of the turtles. This is an obvious move to bridge the gap for younger viewers/readers. And of course there's the young readers novelization of the film. Some year I'm going to go on a novelization-reading BINGE and just rot my brains out with books based on awesome old movies. My friend Biran over at Pop Pop! It's Trash Culture has been talking about starting some sort of book club... maybe it's time to roll that out. 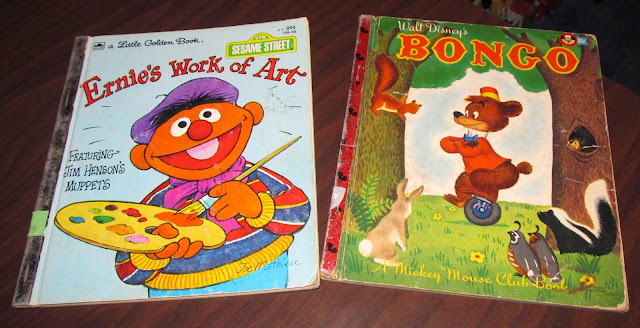 One Little Golden Book, and one of the Mickey Mouse Club books that desperately emulated them. "Ernie's Work of Art" is one I never had as a kid, but would have loved. "Bongo" looks like fun too, although I'm not familiar with the character, I know I've seen him before. 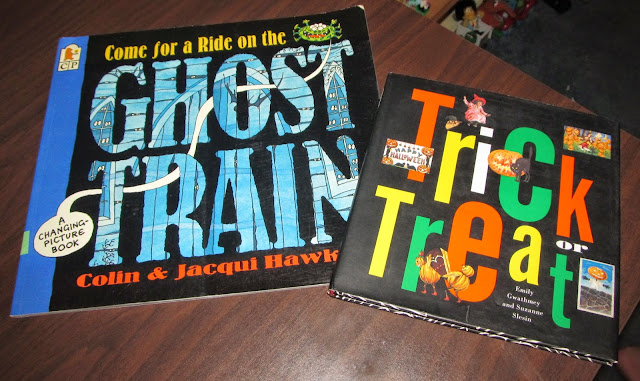 I was pretty happy to add a couple of fun looking Halloween books to the shelf... "Ghost Train" and "Trick or Treat" will both probably get a second look as we get into the Halloween countdown this October. 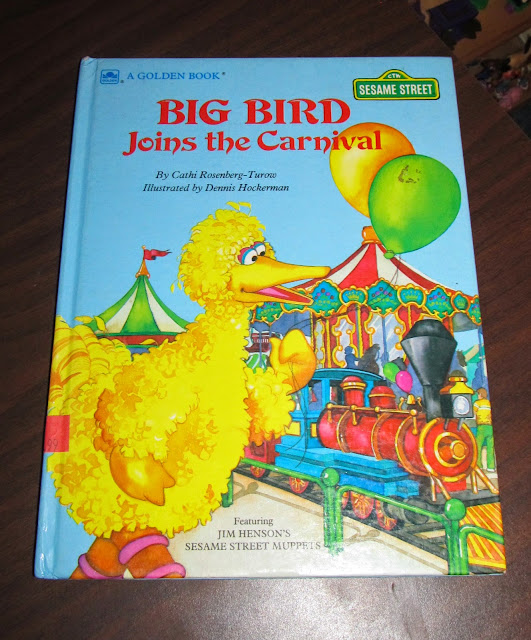 "Big Bird Joins the Carnival" is from 1985 and is based on the "Follow that Bird" film. This tells the story of how he meets the Sleaze Brothers and gets painted blue. It's... not as much fun as you'd think honestly. 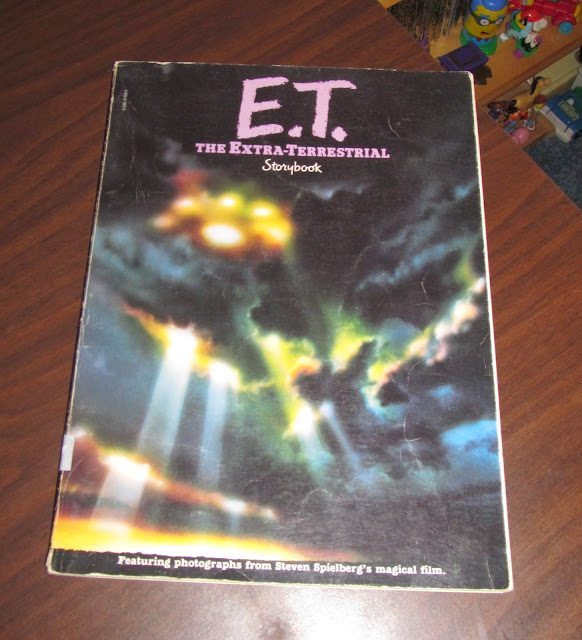 The E.T. the Extraterrestrial Storybook. I honestly don't have a ton to say about this. I have a love/hate relationship with E.T. It simultaneously scared the ever-loving s**t out of me as a kid, and I also LOVED it. So... now I own the storybook... 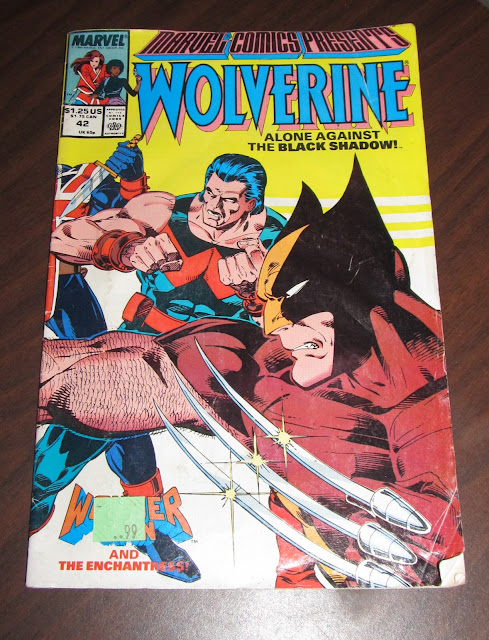 I also found an issue of Marvel Comics Presents, featuring the Daughters of the Dragon, Wolverine, Union Jack, and best of all: Wonder Man! I can't remember if I've even mentioned this comic before, but I loved MCP as a kid. It was such a weird, disjointed introduction to several corners of the Marvel Universe all at once, especially considering that many of the stories were serialized, and so you might pick up an issue to see Wolverine, but then realize that you were actually in the middle of an 8-part story starring him, and then you'd move on to the 7th part of a 13 part Black Panther Story, the 6th part of a 7 part story starring the Master of Kung Fu, and then there would be some weird one-and-done story starring Spitfire or Longshot or some other random c-lister. It was kind of confusing but it really did make the Marvel Universe that much bigger and more magical for it. Plus for around a buck you 4-5 times the action and adventure, even if you didn't get the whole story. 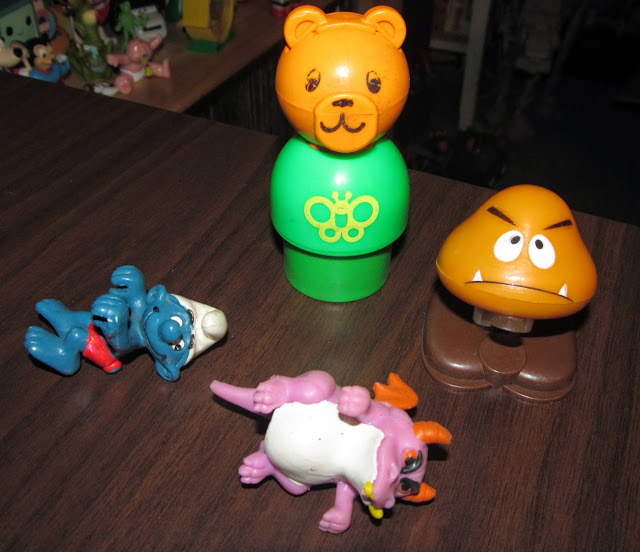 Now! Onto the grab-bag. All of the loose toys you see in the intro picture above were in one great big grab-bag for 2 dollars. There was a lot of detritus to be cast off, but there was so much great stuff included that it pretty much outweighs the junk. Here you can see a Smurf figurine, a Goomba toy from the 1990 Happy Meal toy line featuring Super Mario Brothers 3, and a Fisher Price Jumbo Little People Bear from the Poppity Pop Car set. But by far (to me) the greatest treasure here is the pink dragon in the front, marked "Applause 1987". Google has turned up only one other possible toy in this series, and I am tempted to say this was some sort of random junk-toy series they put together for bookstores, gift shops, etc. The detail they put into these guys were of the level usually reserved for licensed properties (which Applause was the KING of back in the 80's. They were the Funko of movie licensed products back then. PVC figurines out the rear...) this guy looks so familiar to me that I suspect I had one from the set, or spent a lot of time begging for one. 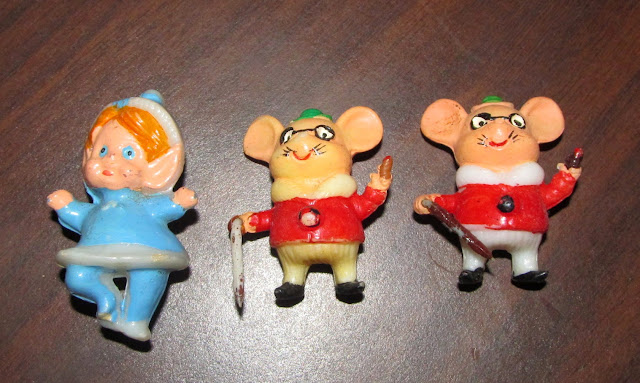 Here is a set of little vintage decorative figures for... whatever those were used for back then. Cake toppers maybe? Cupcake toppers? Either way, they are charming. And they've been saved to send off to a new home already, as I have a friend who eats this stuff UP.

This is the "Gotcha Gusher Squirter" from the 1992 Nickelodeon Happy Meal toy series from McDonald's. This is actually my second toy from this series. I lock only the blimp game and the loud mouth mic now. I love this thing for being exactly what it is: A piece of Nickelodeon history from the days when they were hitting it big and becoming a brand unto themselves. Yes I would have been 13 or 14 around that time, but Nickelodeon still monopolized a lot of my viewing time 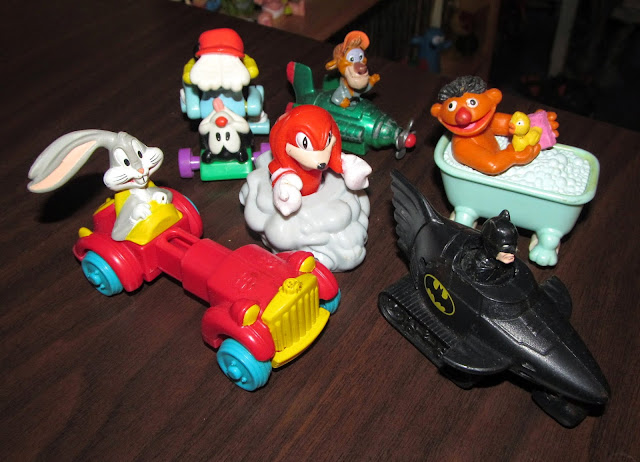 And finally, here are the vehicles from the bag. Bugs, Knuckles, Wakko (from Animaniacs), and Ratchett (from Tail Spin) are all fun, but it's the Batman Returns and Ernie (also produced by Applause!) toys that really made my day!

Well that's it for tonight kids! I still hope that you enjoy seeing and reading the junk I find at Goodwill nearly as much I do finding it! I'll be back soon with more Geeky Goodwill Goodies! Until then, Happy Hunting!
Posted by Derek Ash at 5:35 PM