Here's a pile of goodies from a trip I  made to the Bangor, ME Goodwill just a few months ago. I'm going to be honest and tell you all that I skipped a bunch of other much more boring posts that I have stored in the archives to write about this stuff. I just couldn't force myself to write about a bunch of lackluster Happy Meal toys or mediocre Little Golden Books tonight. So I went looking for something more exciting. And now here we are. 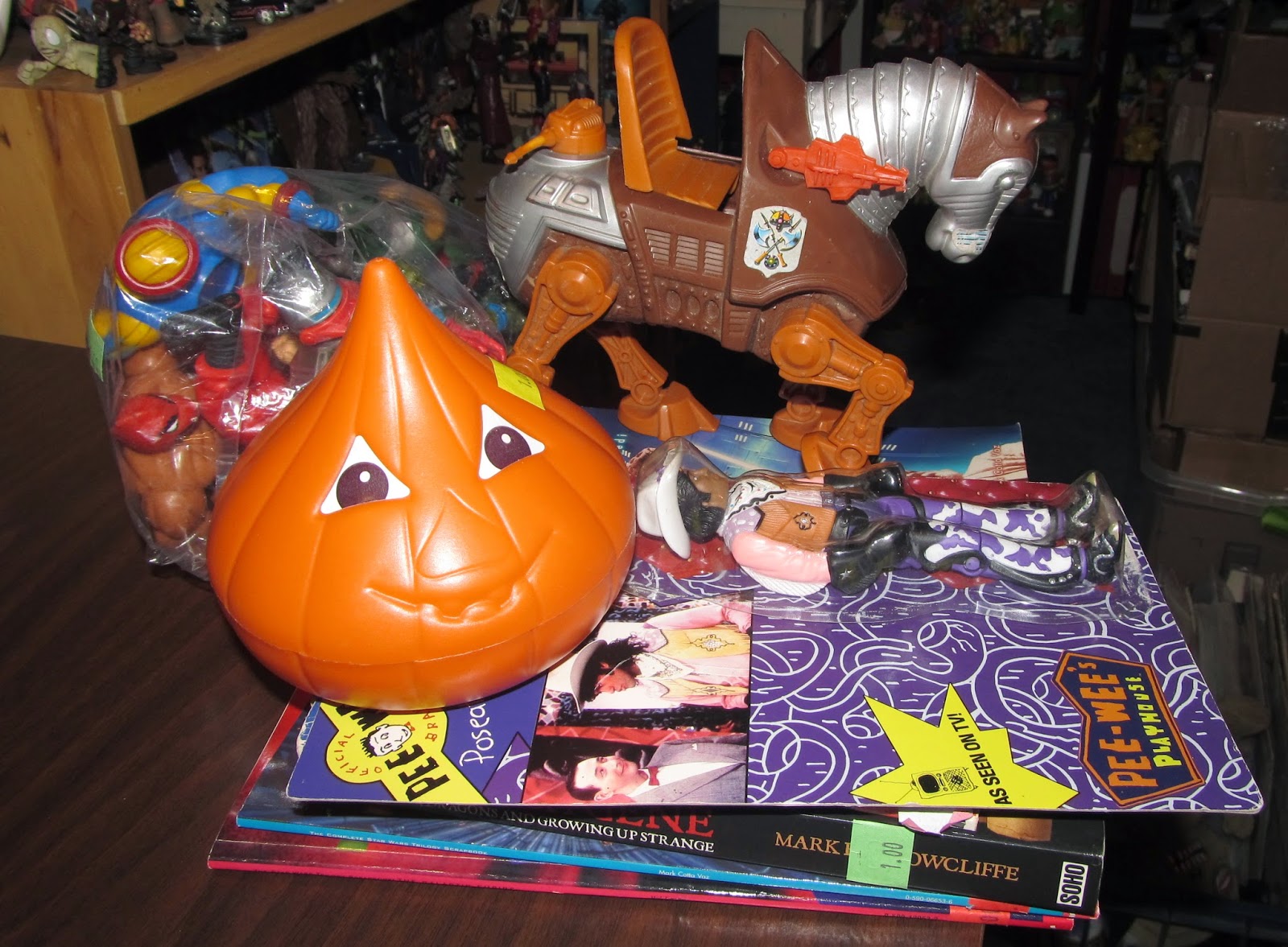 Here's the grand pile of junk I brought home from Bangor. LEt's take a closer look, shall we? 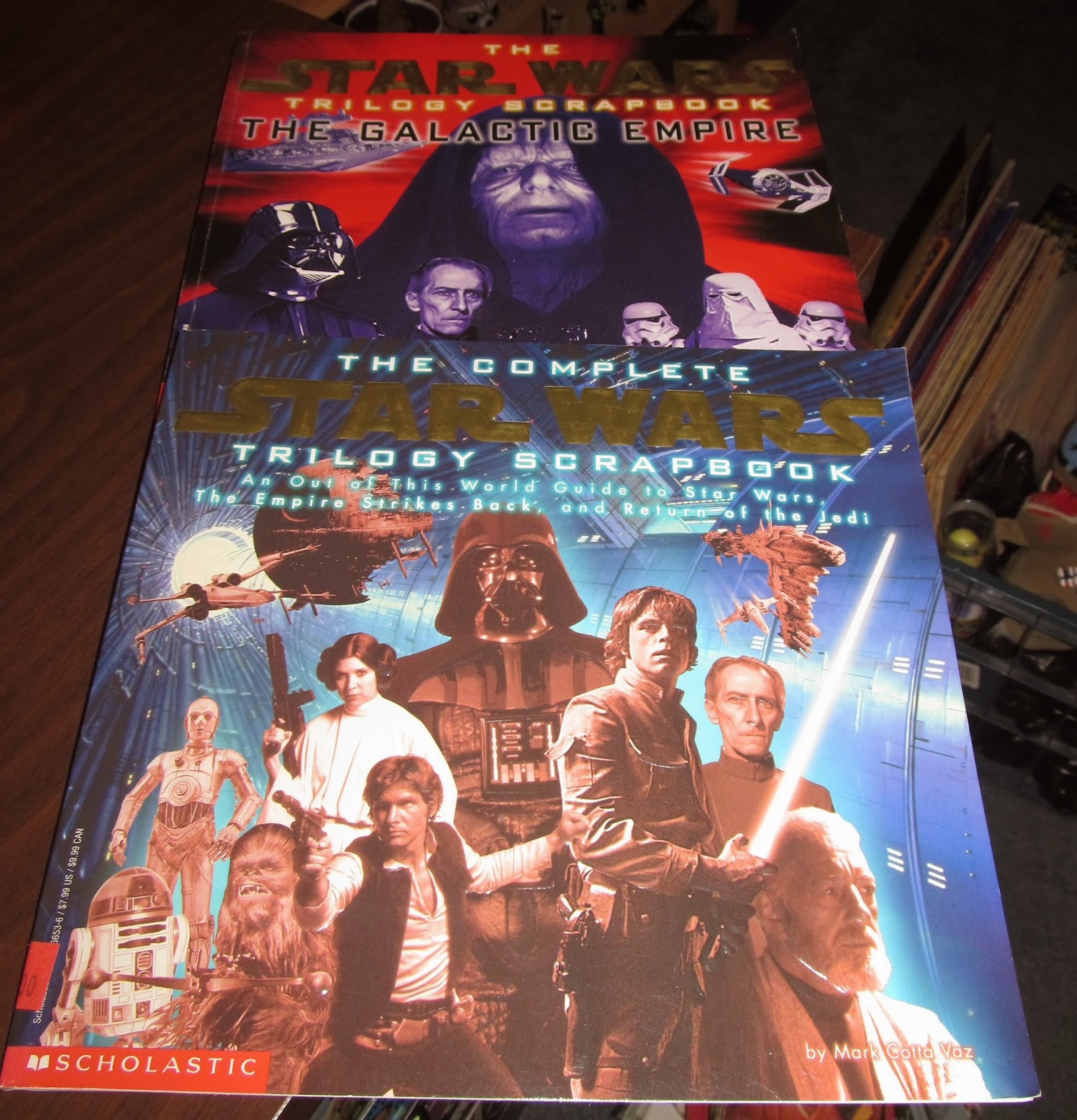 Remember back before the Star Wars prequel trilogy came along and messed up everything? I don't just mean the story or the canon or the continuity. I mean all the other merchandise too. Remember when you could buy books and things that didn't try to awkwardly shoehorn in reminders that Hayden Christensen exists somewhere in the timeline? Well these books do. They remember a simpler time when all that existed was a ragtag group of rebels and their hyperventilating archnemesis. I LIKE THESE BOOKS. 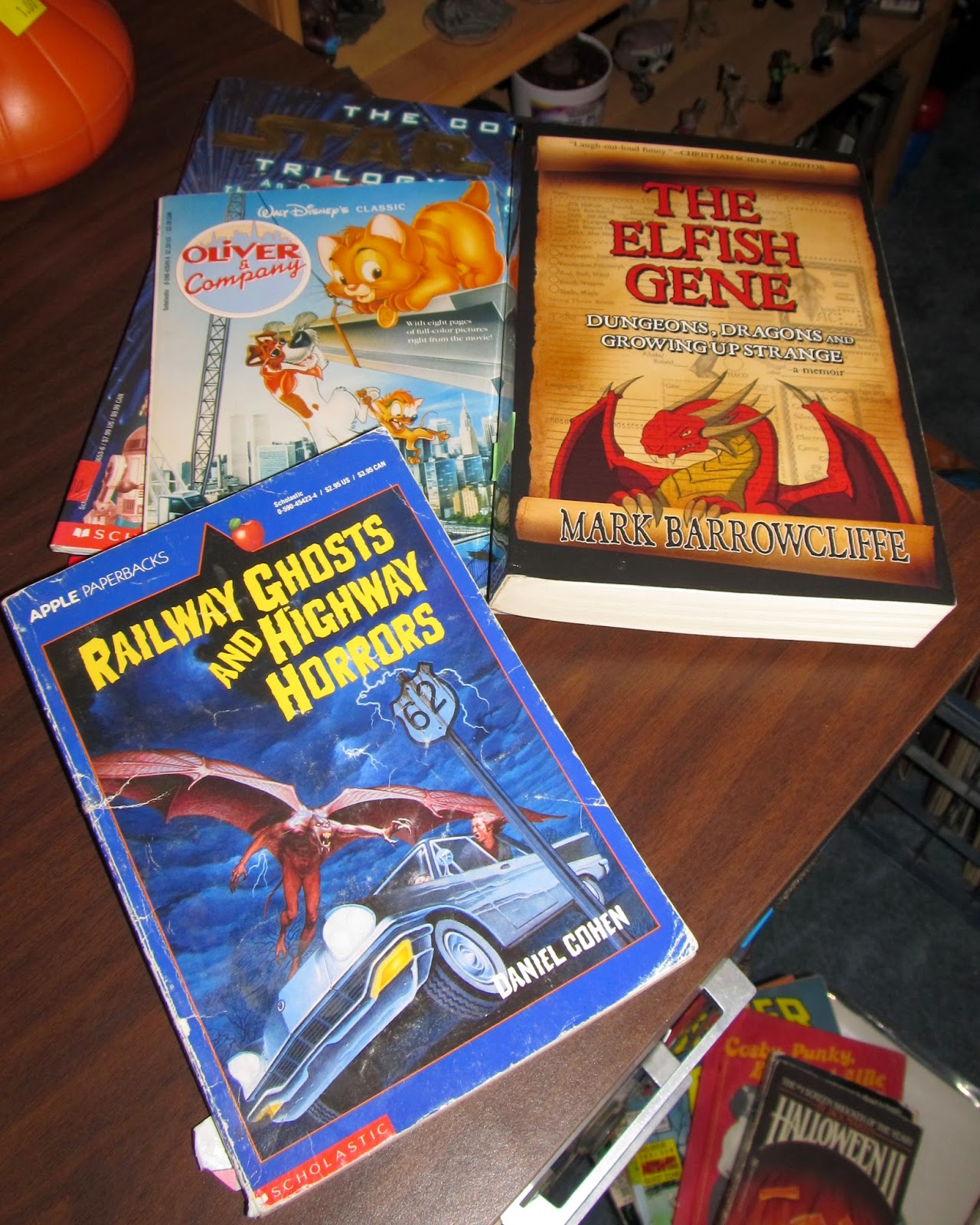 I picked up a handful of other books as well. A novelization of Disney's "Oliver and Company" for one. An interesting-looking Dungeons and Dragons themed memoir by Mark Barrowcliffe, "The Elfish Gene" and a collection of ghost tales from Daniel Cohen called "Railway Ghosts and Highway Horrors," which has been added to my Halloween Read Pile. Altogether not a boring trio of books by any means. 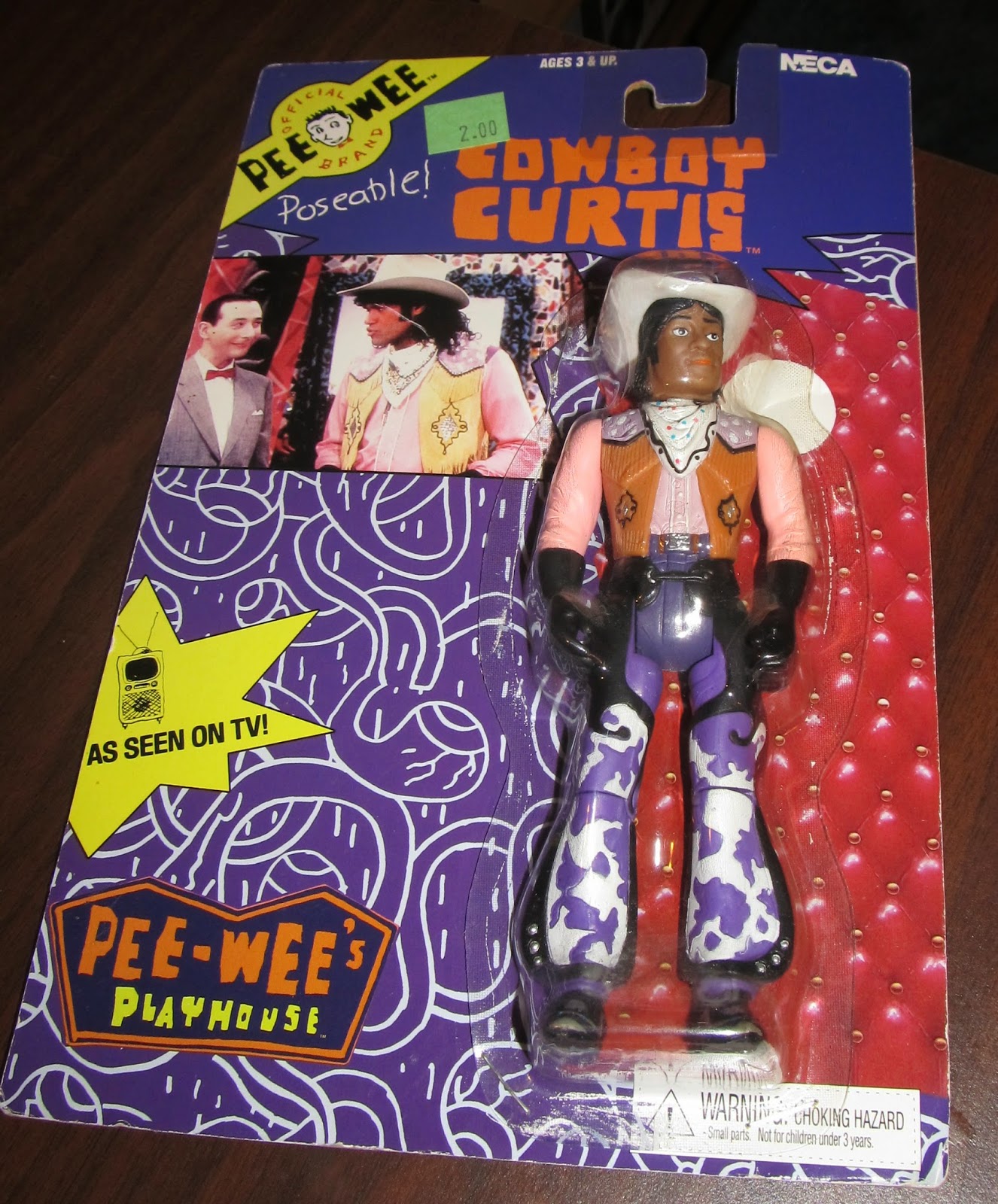 I found a sort-of-carded (the blister was stapled to the card) Cowboy Curtis from the NECA reproductions of the 80s Pee-Wee's Playhouse toys. I liberated him from his poorly preserved plastic prison and shelved him with the Miss Yvonne I received from Miss M of Diary of a Dorkette. These repros were done in 2007 but you would almost never know it. 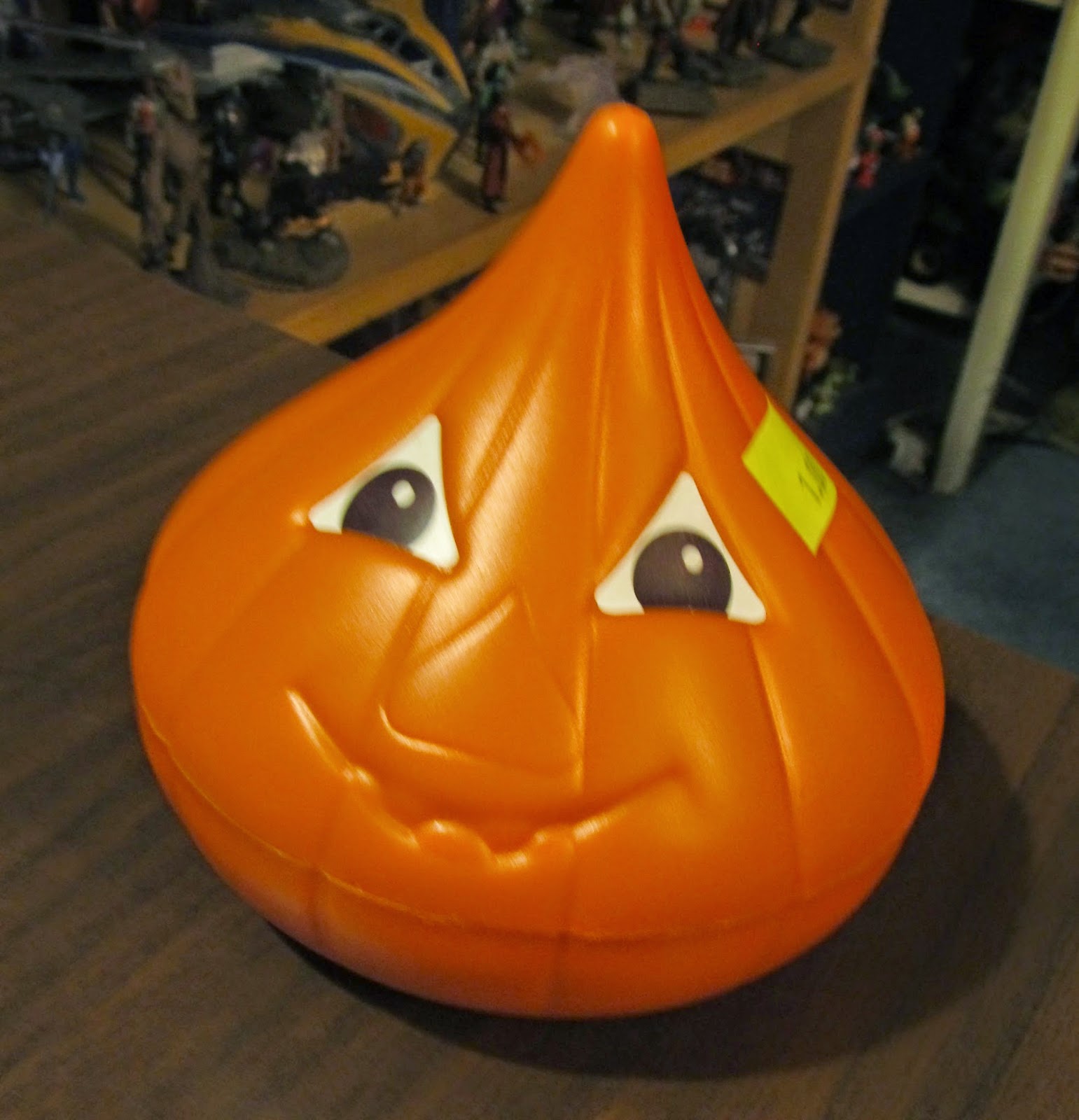 This was a fun find. It's a plastic Hershey's Kiss container done up to look like a Jack O'Lantern. The year on the bottom is 1990, so this little fella's been around for awhile. Unfortunately he is missing the Hershey's Kisses sticker that used to be his nose. But I don't mind. I honestly kind of like him better without it. 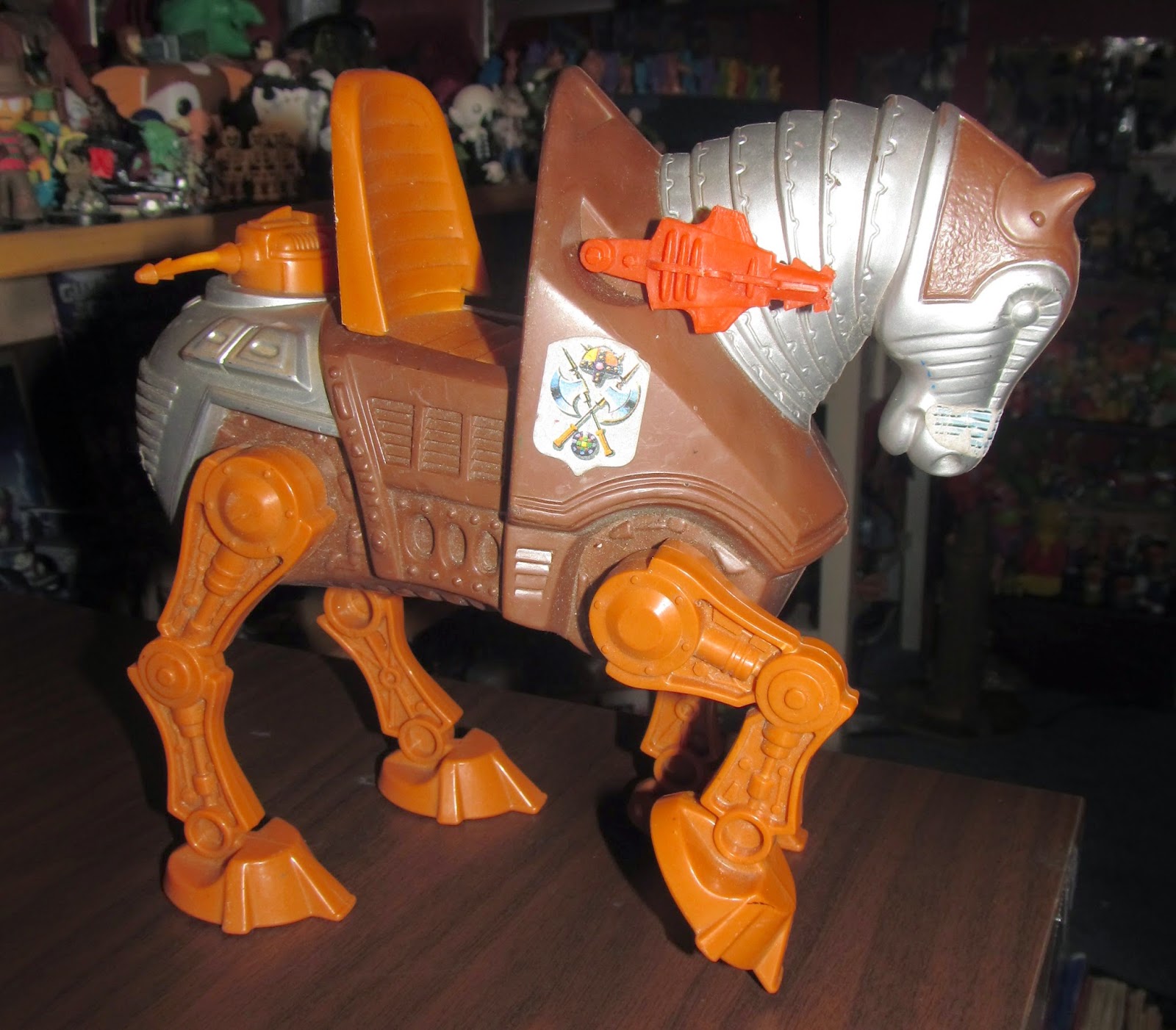 Of all my finds I think this was my favorite. Far from complete (and it matters not at all to me) this Stridor toy is from the old Masters of the Universe series. He's missing his headpiece, his tail, and his guns on either side are broken... but the effect is still there: STRIDOR!!! I always desperately wanted a Stridor as a kid, but never got one. So now... I own him. 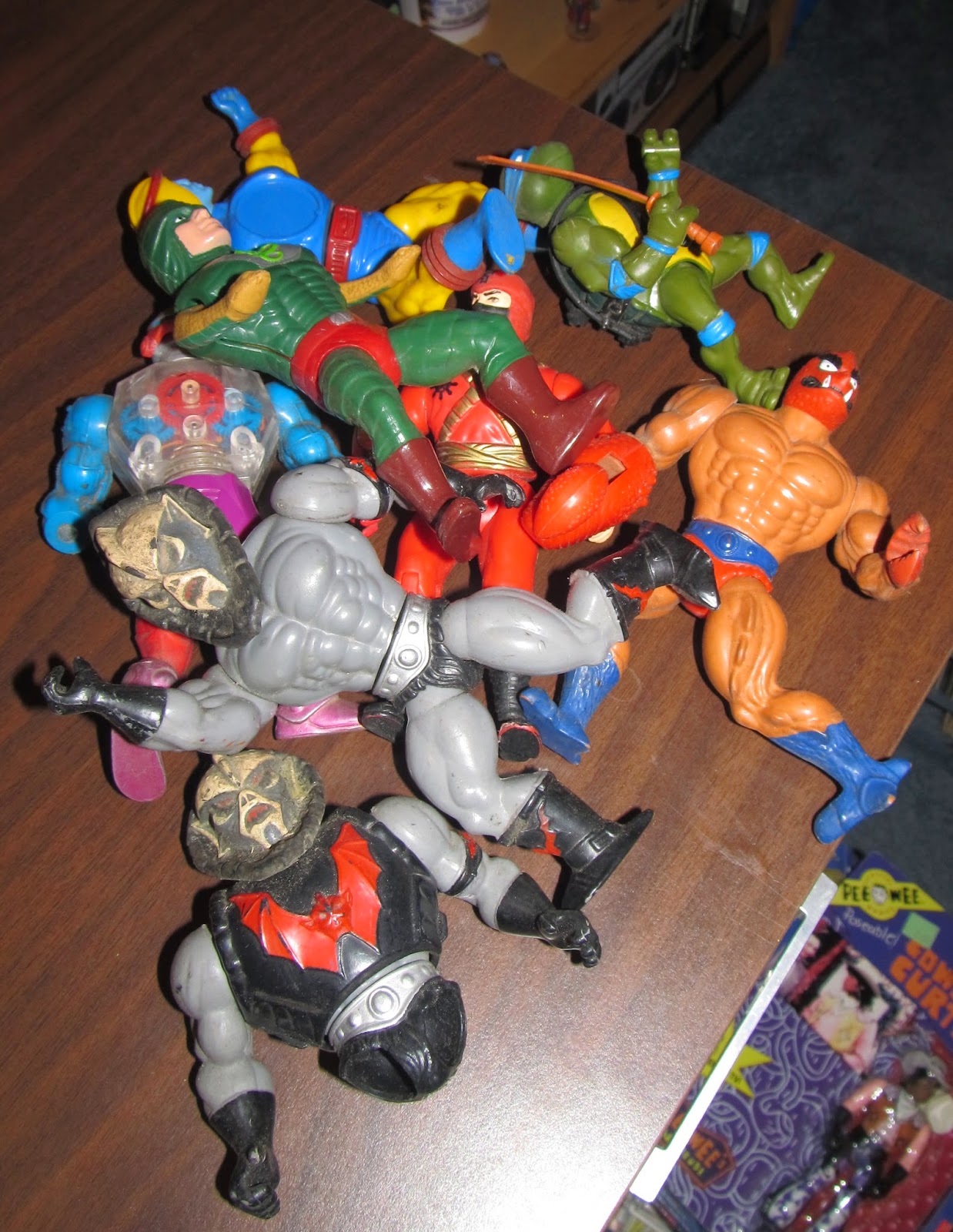 Finally, there was a grab-bag full of old action figures. Or some cases... pieces of them. 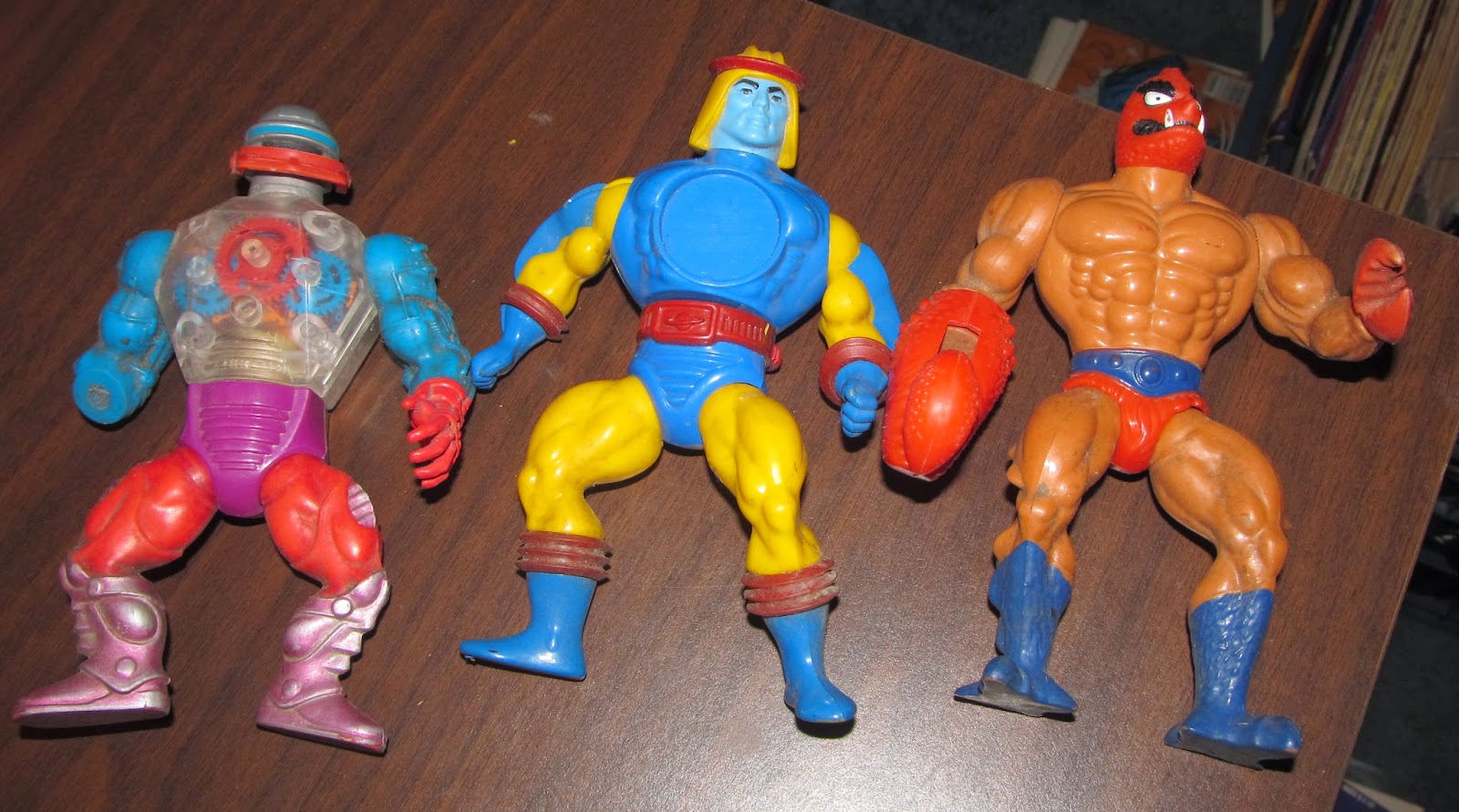 Roboto has a permanently broken arm. I'm not sure but I think I re-donated him to Goodwill. I already have one anyway. Another Sy-Klone and Clawful in marginally better shape (these were cleaned up and traded off) also a pair I already own. 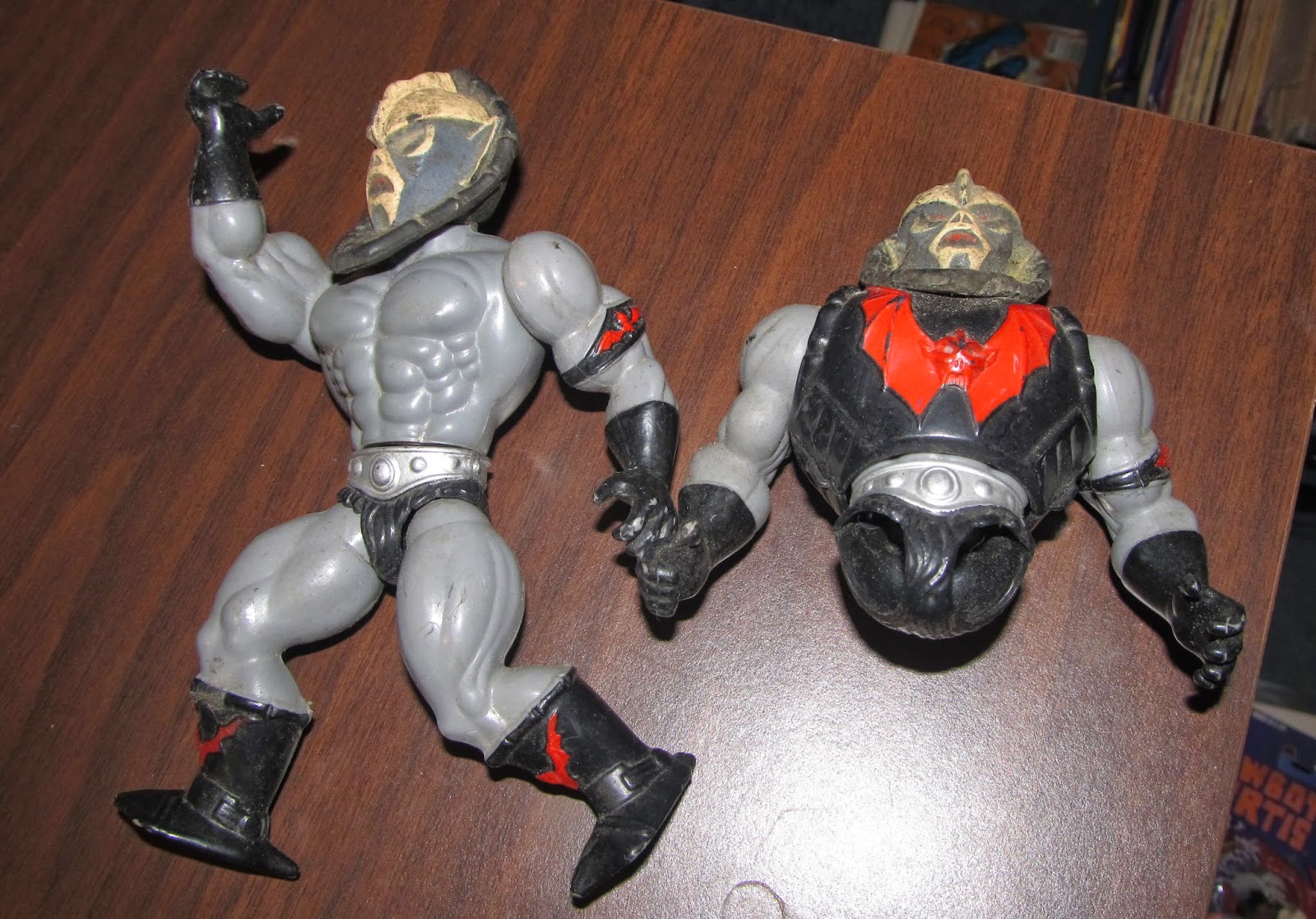 With these guys I now owned Two and a Half Hordaks! A new sitcom coming this fall. Legless Hordak donated his armor to legged Hordak and took a trashcan dive. Legged Hordak took a trip to Canada. 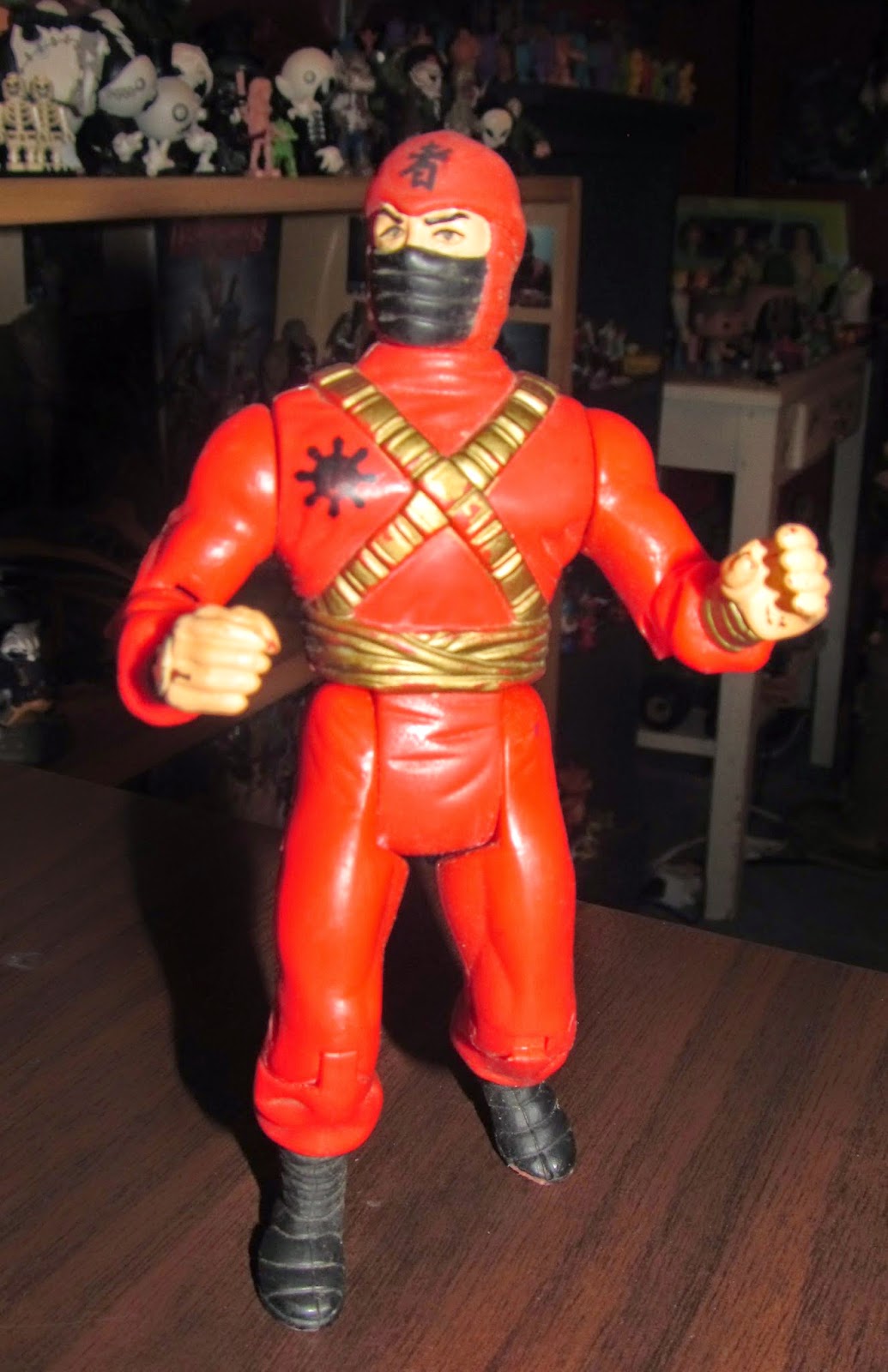 This "Ninja Master" is a Chuck Norris: Karate Kommandoes action figure. He's a bad guy. Despite all that, I forgive him. 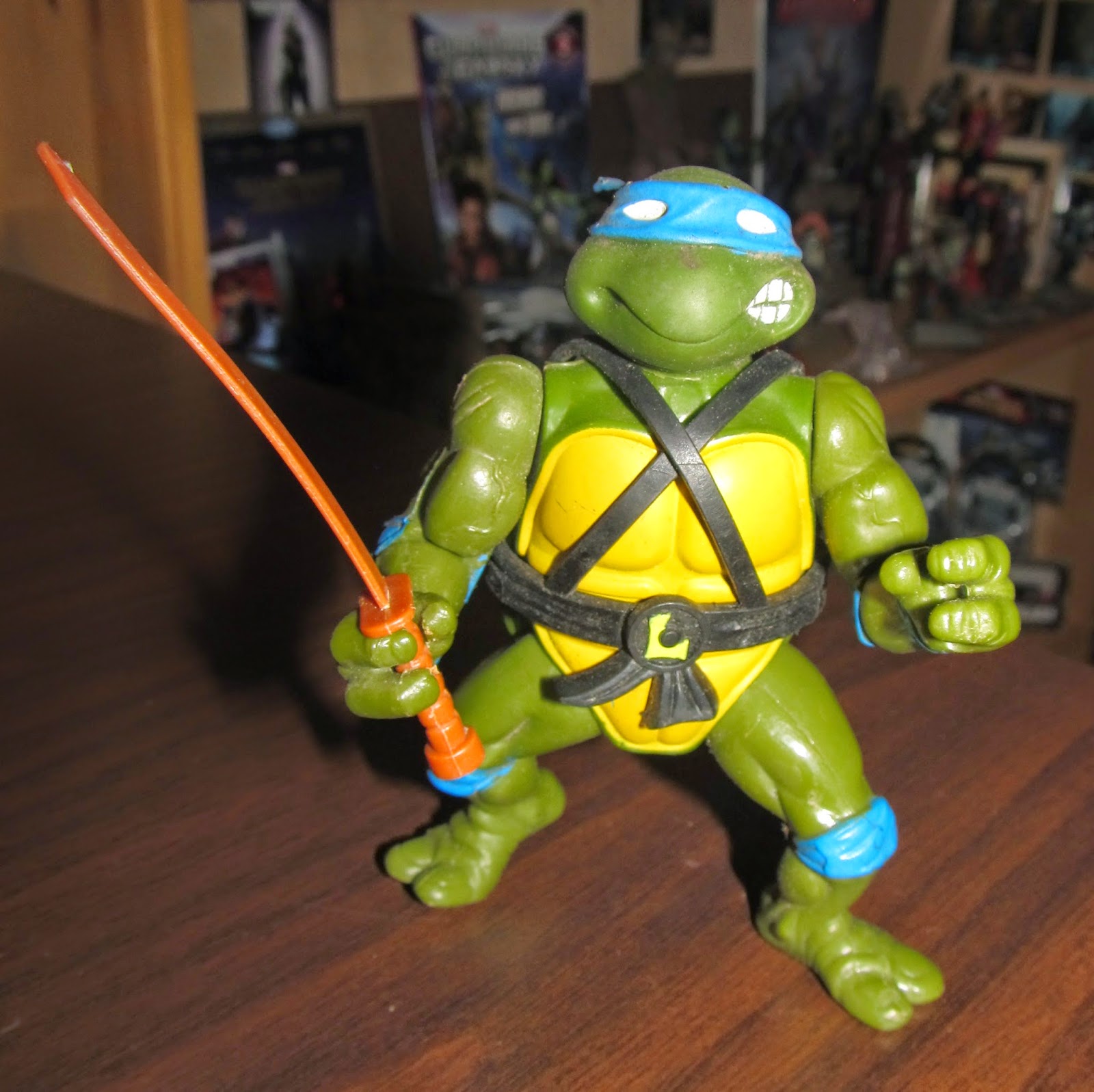 I was probably most excited to find this soft-headed Leonardo with his belt and one of his katanas. His bandana is a little chewed but again, I don't mind. (ALL of the action figures in this grab bag needed a BATH and they got one shortly after I got done photographing them... I just like to photograph things as fresh out of the grab-bag as possible...) 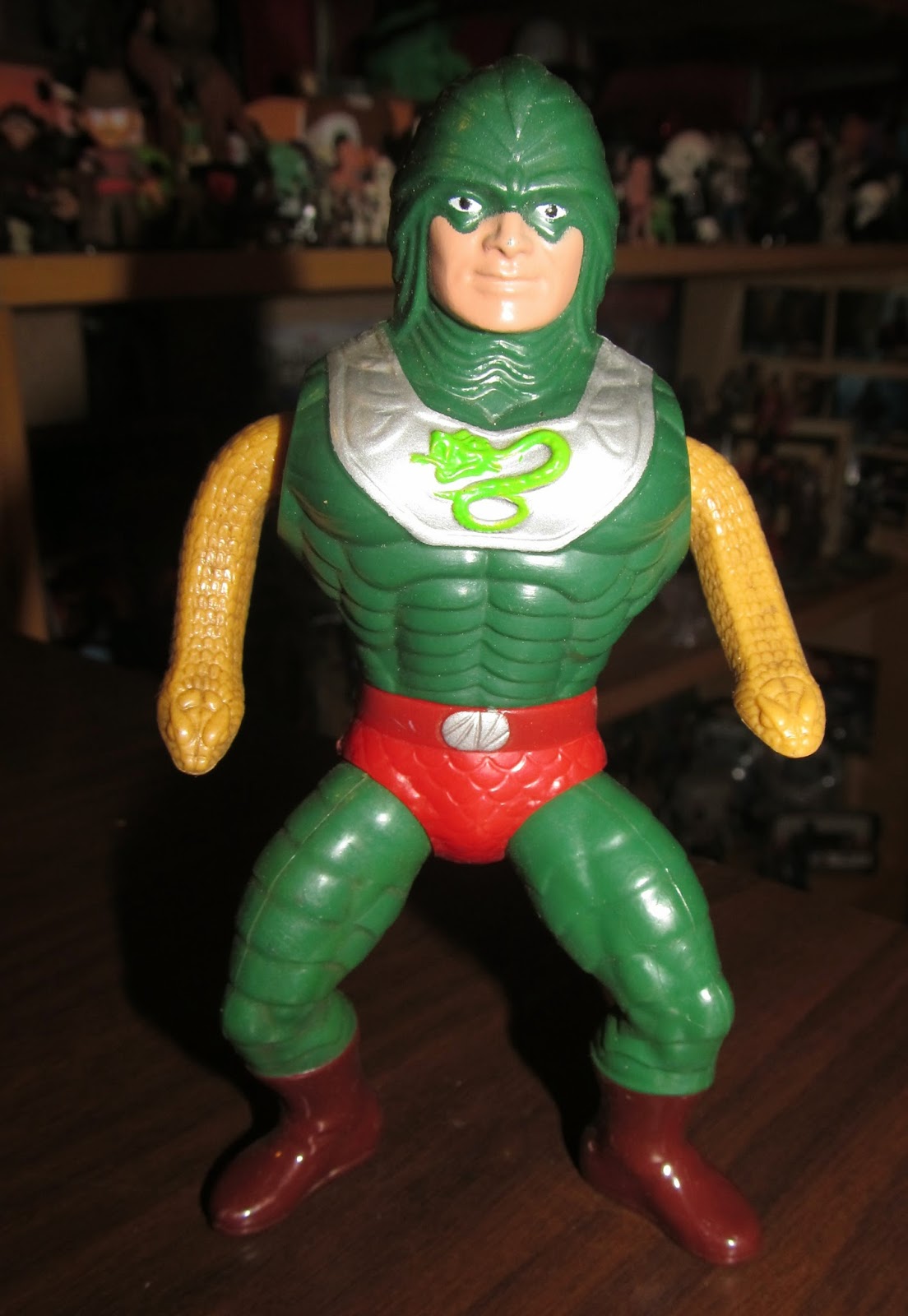 I also found this King Hiss! This is the second King Hiss I've found, but the first one with the torso disguise pieces. He's just missing his arm covers.

Well that's it for tonight kids! I'll be back with some more (probably slightly less exciting) Geeky Goodwill Goodies soon enough! Until then, Happy Hunting!