UPDATED TO ADD: I just noticed that this post is officially my 400th! I noticed this very shortly after posting my 403rd post which I put on the site 2 days after my 3 year blogoversary! Lots of milestones I've completely missed!

So... I think I'm actually starting to get caught up with the stuff I purchased in the year 2015! Finally! The year is half over and I think I'm finally here! Yay! Here's a little pile of junk I brought home. Nothing RIDICULOUSLY exciting, but a couple nice grabs. Let's check it out, shall we? 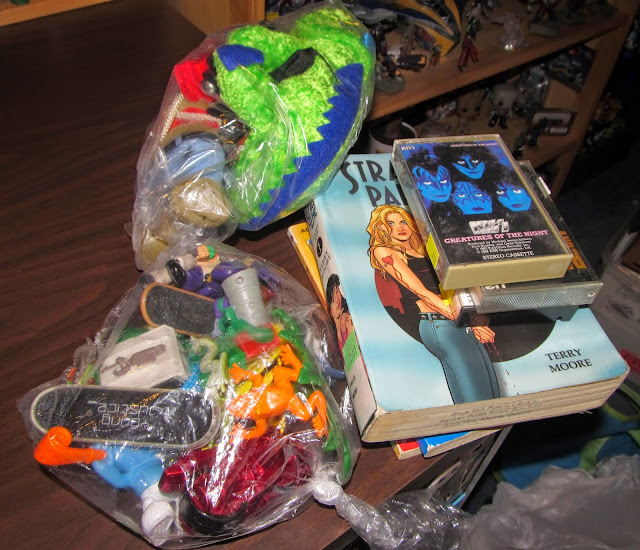 So here's a pic of the whole pile. Time to dig in. 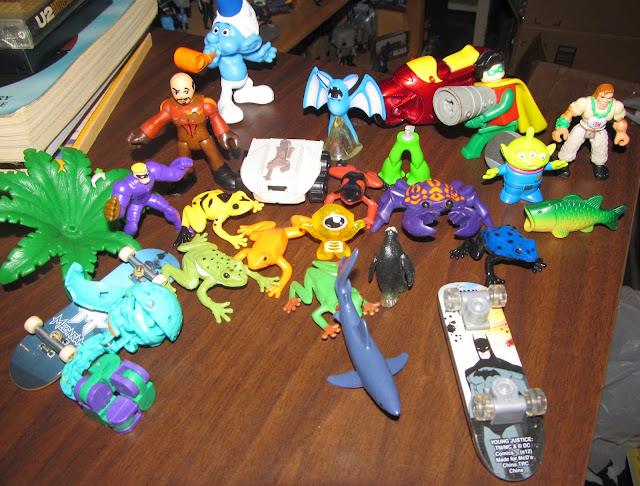 I tore open the grab-bag first. Disappointingly, this was one of those rare occasions where I really should have looked closer, because once I got it home, I found there wasn't really a ton of stuff in this one to interest me. 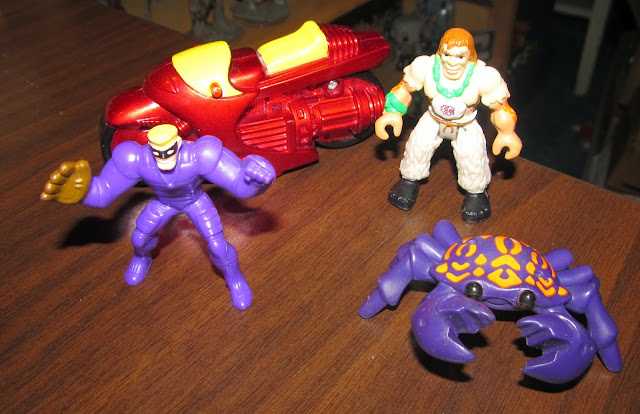 A handful of interesting items, my favorite probably being the Imaginext crab in the bottom right corner here. We also have what looks to be some sort of Iron Man themed motorcycle, a Sportsmaster Happy Meal toy from the Batman: The Brave and the Bold line, and another Imaginext figure, this one some sort of medieval or caveman shaman or something. 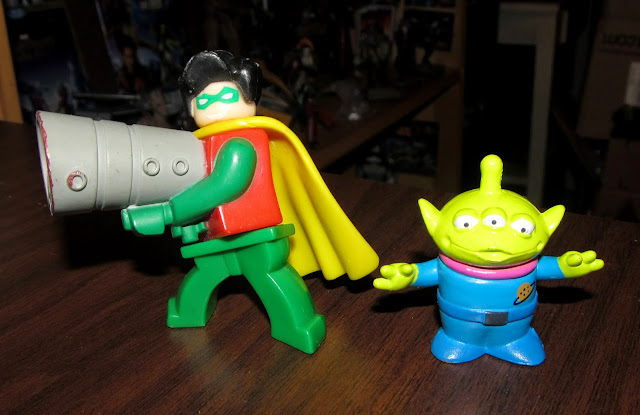 There's this Robin from the Batman LEGO Happy Meal line, and a Toy Story alien (honestly Robin, this alien and that purple crab are probably the only real 'keeps' for me out of this bag... not really a win). 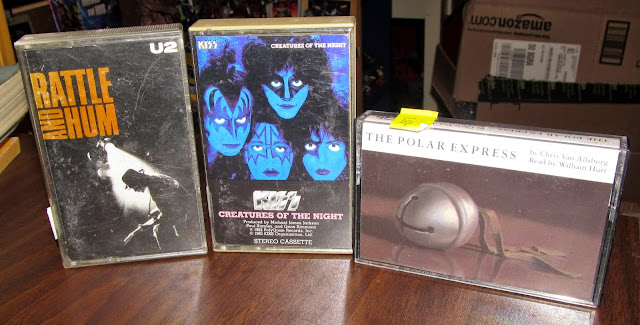 Some fun cassette finds... U2's "Rattle and Hum"is full of some great live performances, and KISS's "Creatures of the Night" I picked up for the cover art alone. I'm always on the lookout for Christmas cassettes with some personal meaning to them, and Chris Van Allsburg's "The Polar Express" read by William Hurt fits the bill NICELY. 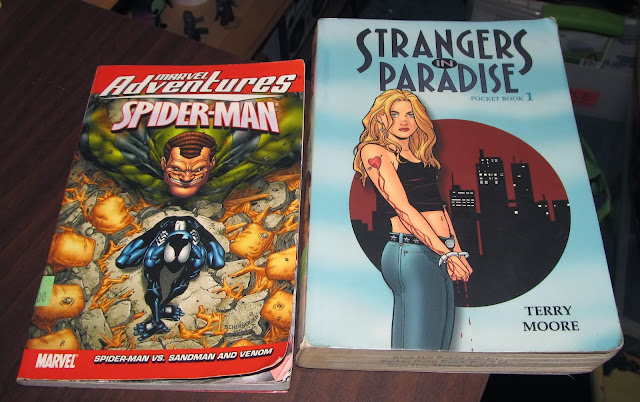 A couple of nice Graphic Novel scores in a Marvel Adventures: Spider-Man digest "Spider-Man vs. Sandman and Venom" (maybe released around the time the 3rd Raimi film was out?) AAAND the first collected 'pocket book' of "Strangers in Paradise" by Terry Moore. I've never read SiP before, but I've heard people RAVE about how great it is, so I'm excited to give it a try. 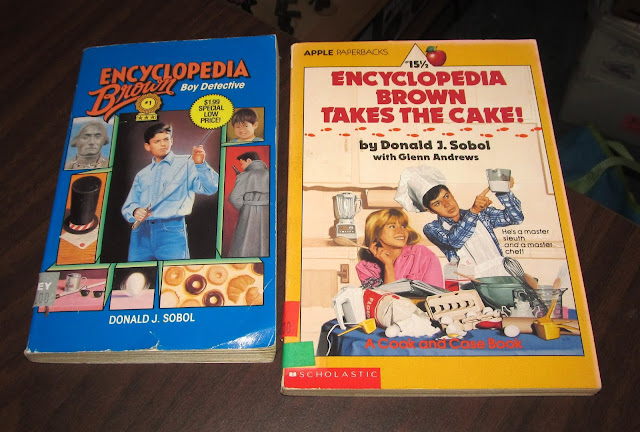 You're going to start seeing a few more young-readers chapter books cropping up on the blog. I won't subject you to absolutely every purchase, but my reasons are twofold: I'm buying chapter books to read to my 6 and 4 year old sons. They REALLY like the Magic Treehouse books, and since I now know they'll sit and listen to a couple of chapters at a time (as long as there are a few illustrations peppered in from time to time) I've gone whole hog. The other reason is I like to track down books I loved as a kid myself. I was an avid reader and as soon as I learned I could read to myself for pleasure I never wanted to stop. Encyclopedia Brown books were a popular series with the kids I went to school with and I want to share these stories with my kids. 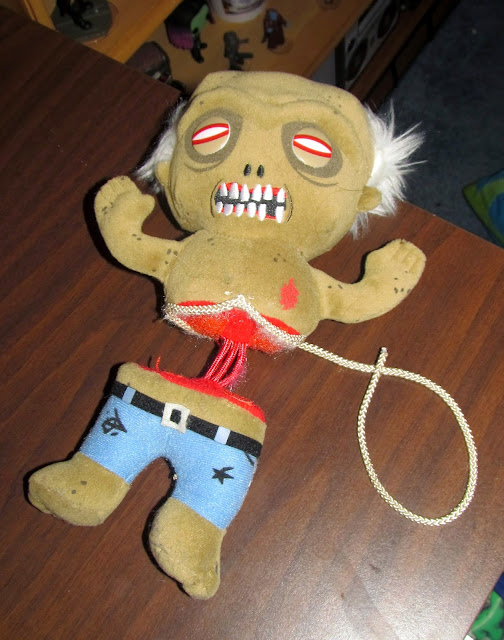 There was one final item this time around that I was pretty excited to bring home... and it's this guy right here. This is a Funko POP plush "Well Zombie" from The Walking Dead. Before their "Fabrikations" line Funko was putting out stuffed characters based on their POP designs. This fat fella is cleverly velcroed in the middle so he can be puled apart the same way he was on the TV show (probably one of 3 memorable moments for me from the "Herschel's farm period"). This guy was in a grab-bag with I-don't-even-know-what-else because this is from a while back and he was the only thing I was after.

That's it for tonight kids! I'll be back with more Geeky Goodwill Goodies soon enough! Until then, Happy Hunting!
Posted by Derek Ash at 9:08 PM