Oh! I'm editing this to add: A of July 17th, 2015 my blog is officially 3 years old! I'm still toddling along, and occasionally pooping myself, but I'm starting to get the hang of this, and as long as I don't pick up some tiny item from the floor and get it lodged in my esophagus, you might all see me turn this thing into something worthwhile... at some point. I'll keep you posted.

ALSO: this is my 403rd blog entry, which means I breezed past the 400 mark a few posts ago and just never noticed! So yay me!

- And now back to the regularly scheduled blog! -

Here's a fun little pile a' stuff from a trip I took to Goodwill awhile back! A handful of REALLY great retro finds here from the days of my youth! 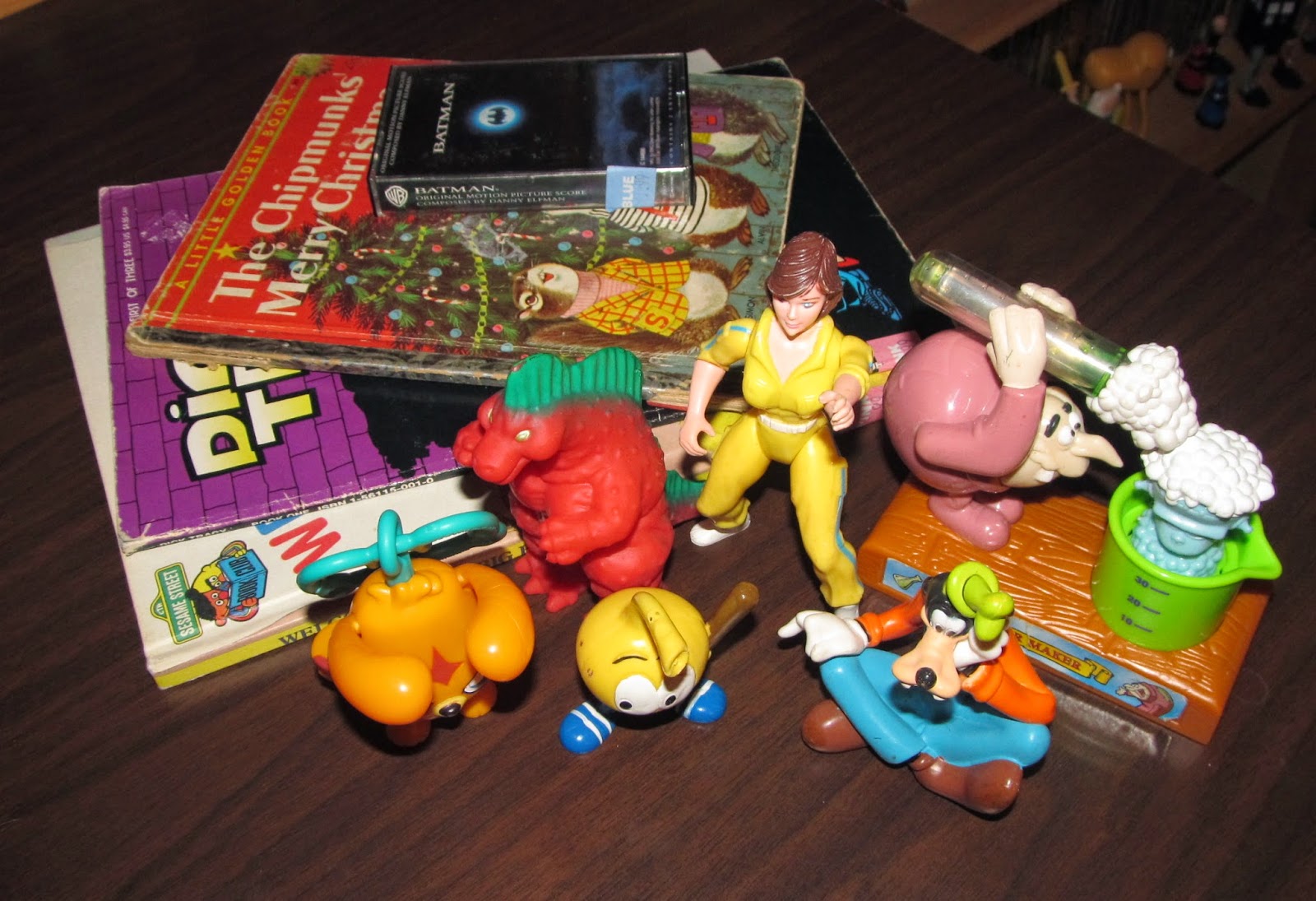 First up there was a grab-bag. Here are the contents: 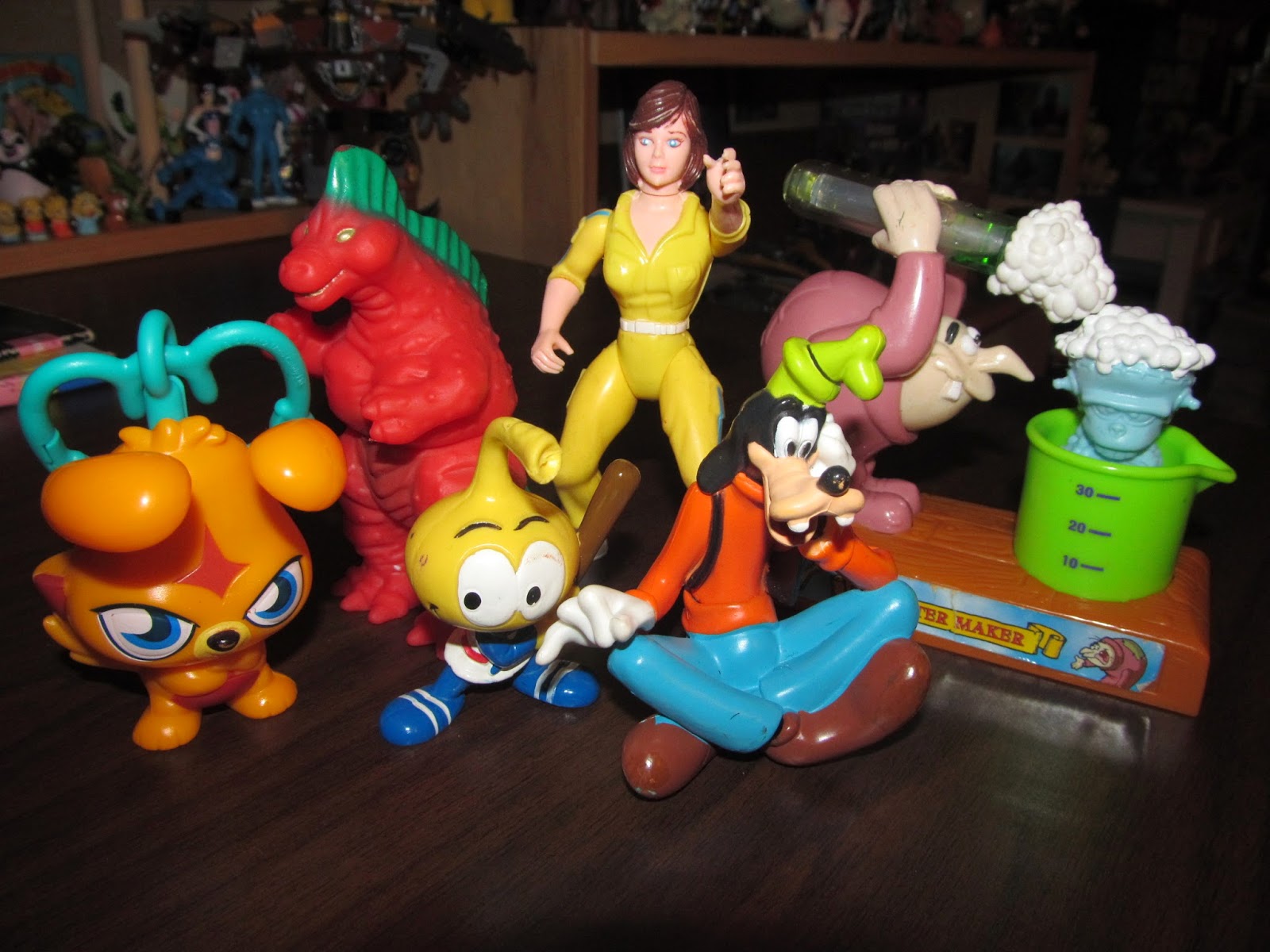 With the exception of the Moshi Monster happy meal toy (sorry if you're a fan, but I am not), there weren't any real duds in here! LEt's take a more in depth look. 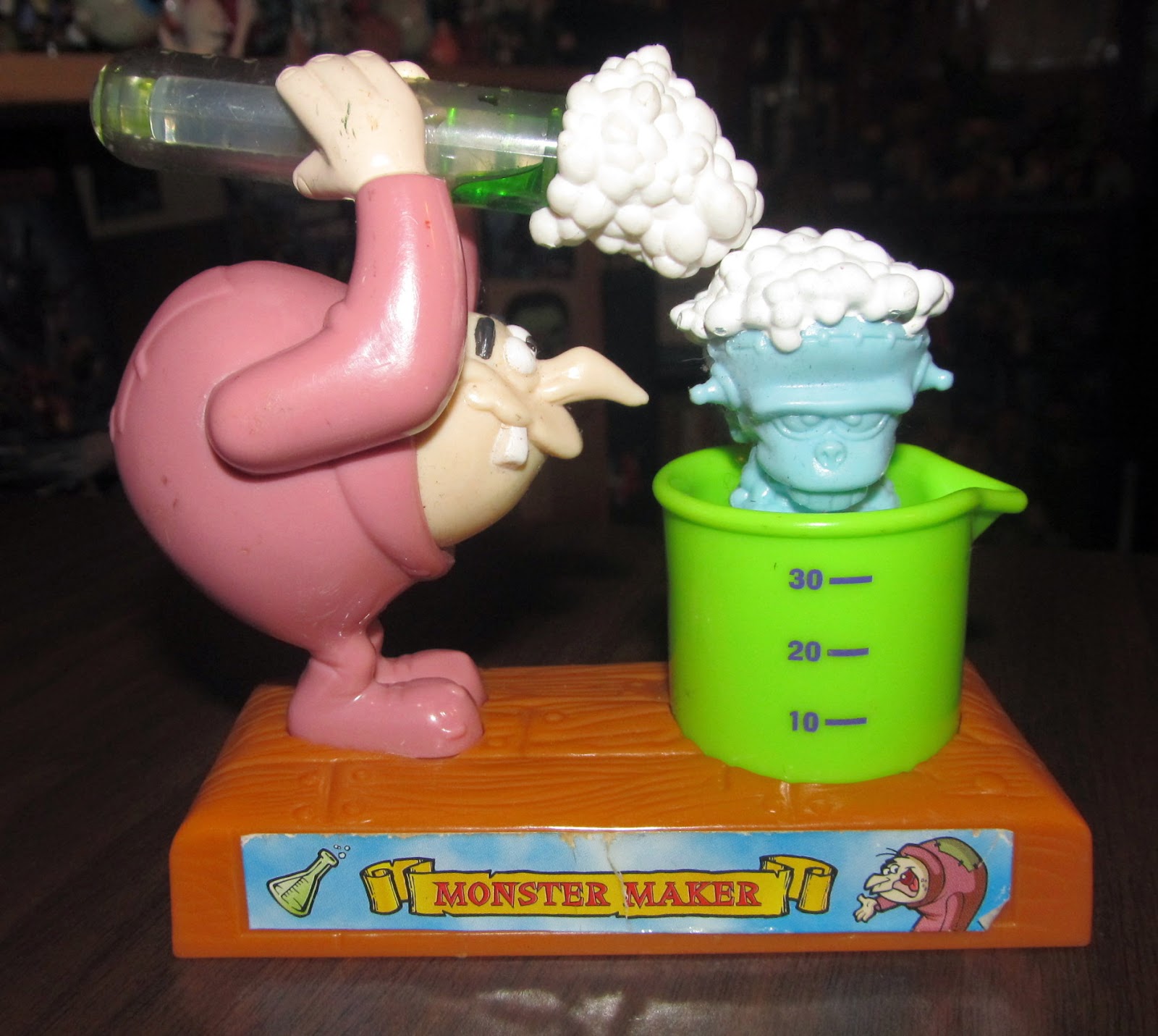 First up we have a Toonsylvania Burger King Kids' Club toy. This is from an Animaniacs-esque monster-themed cartoon from the very late 90's. Toonsylvania has appeared here on the blog before, although I had never heard of this show before that, and am unfortunately still no more familiar with it than I was, past the fact that I obviously know there are fast food premiums (and a wikipedia page!) based on the property. 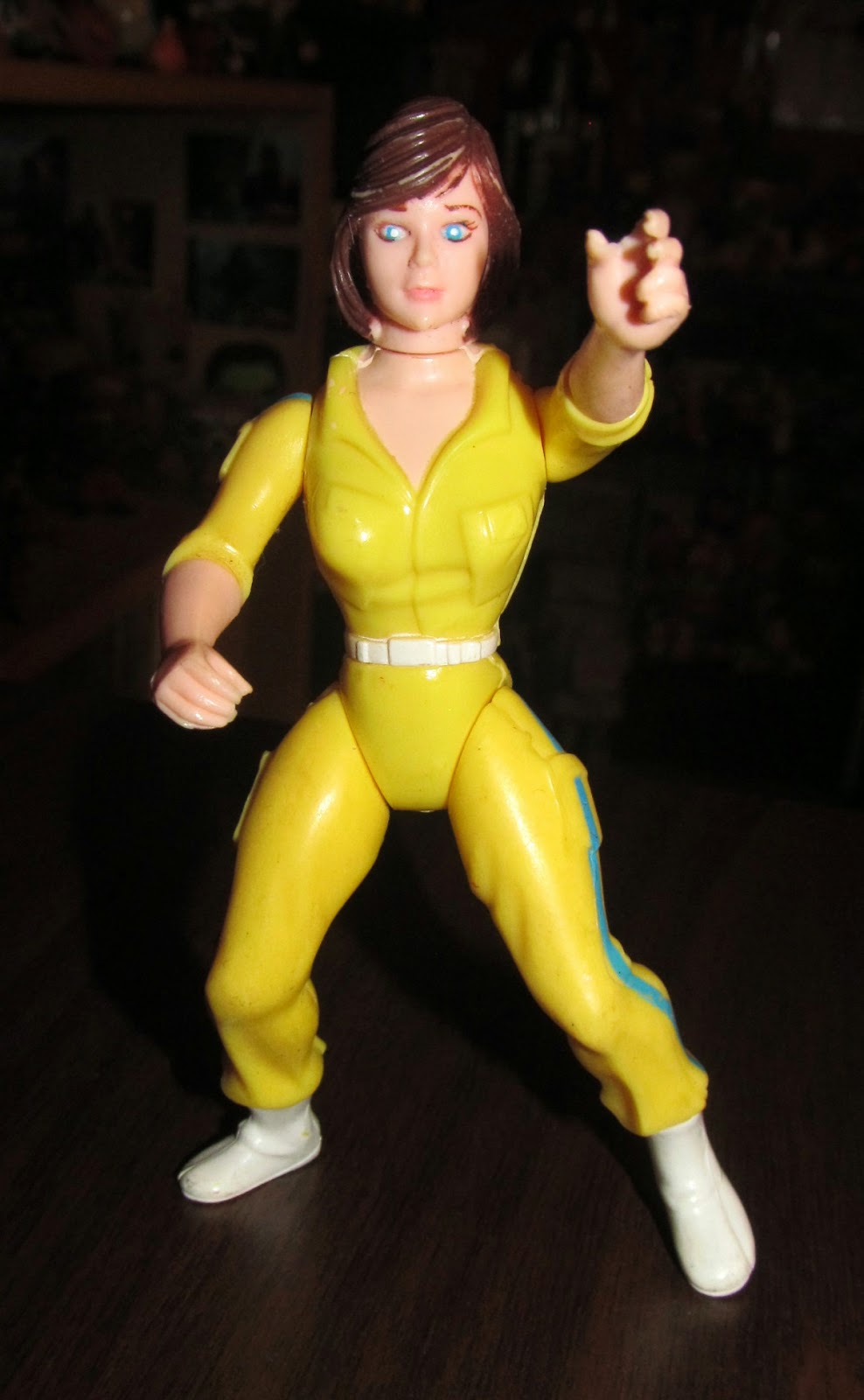 Arguably the biggest win in this grab-bag is this lady right here. An April O'Neil from the original TMNT action figure line! If I'm not mistaken I believe this is the figure that became my "default" April because the one I had before was not in this good of a condition. I may have mentioned this before on the blog, but if not... here goes: My April O'Neil had Dazzler's powers when I was a kid because I was obsessed with the X-Men. (She's aiming a photon blast right at your face now) 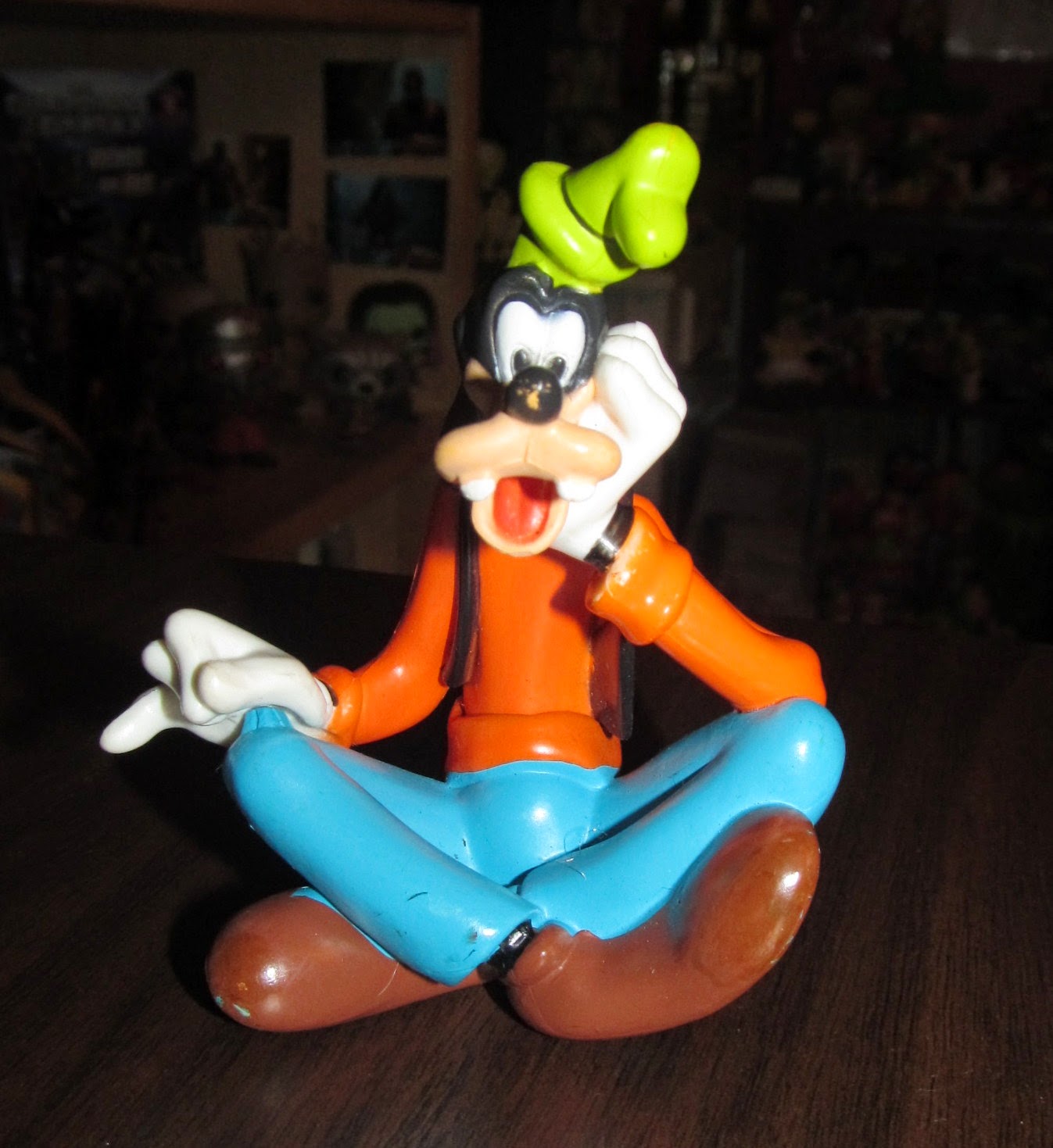 Next up is this Goofy PVC. I'm not a huge Disney fan myself, in that I don't really care all that much about Mickey or the gang, but occasionally I come across a fun toy that catches my eye and represents one of the iconic characters well. This is a pretty nice figure. I think I may have sent this guy off to someone else in a trade or something, but I'm pretty sure I don't own him any more in any case. 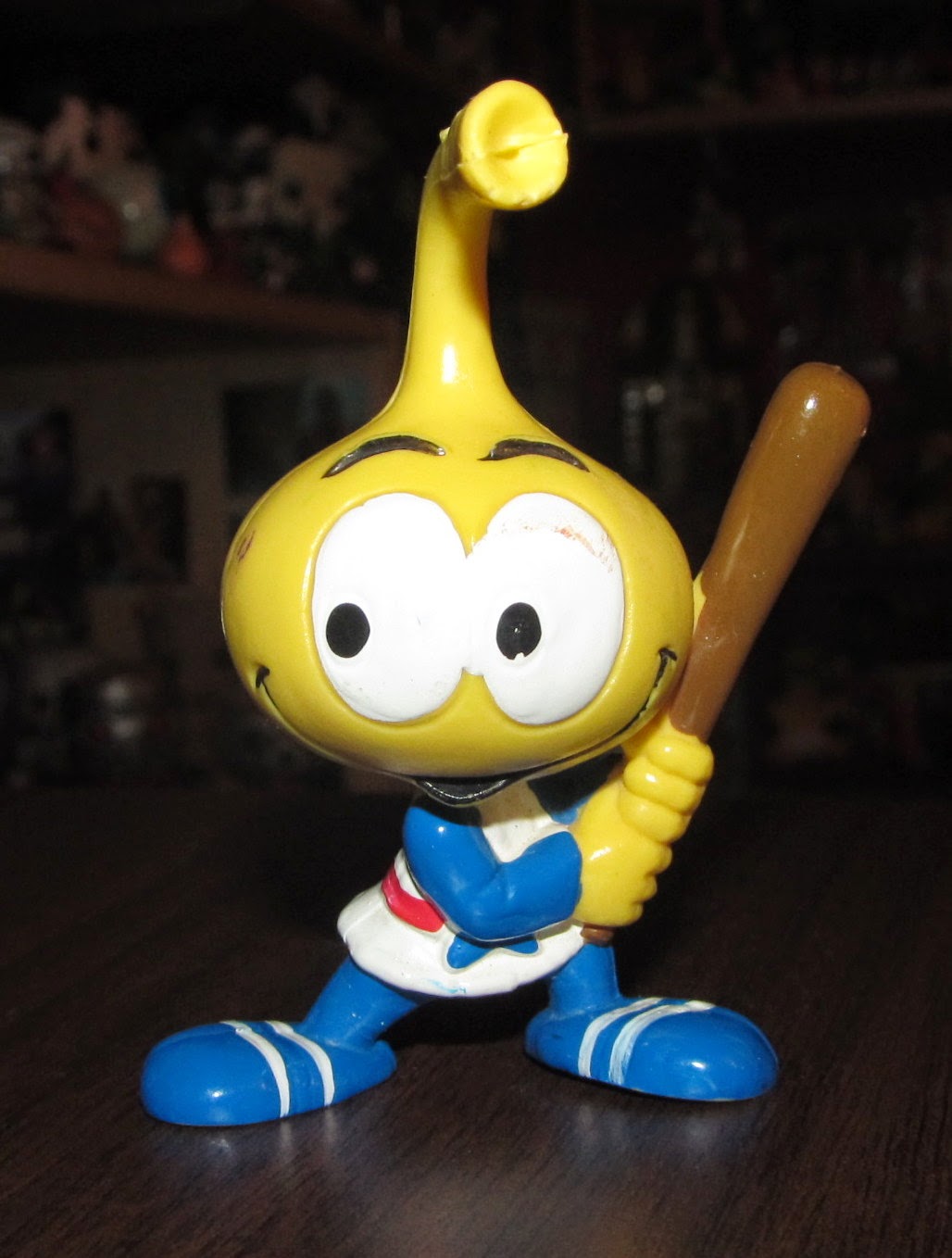 Here's a really fun find! This is a Snork pvc figurine of Allstar from 1983! While I HATED most of the Smurfs-style shows that followed the lives of some strange tribe of creatures living somewhere in an adorable community (Biskits, Paw-Paws, Mon-Chi-Chis, the actual Smurfs) the Snorks got a pass for some reason. 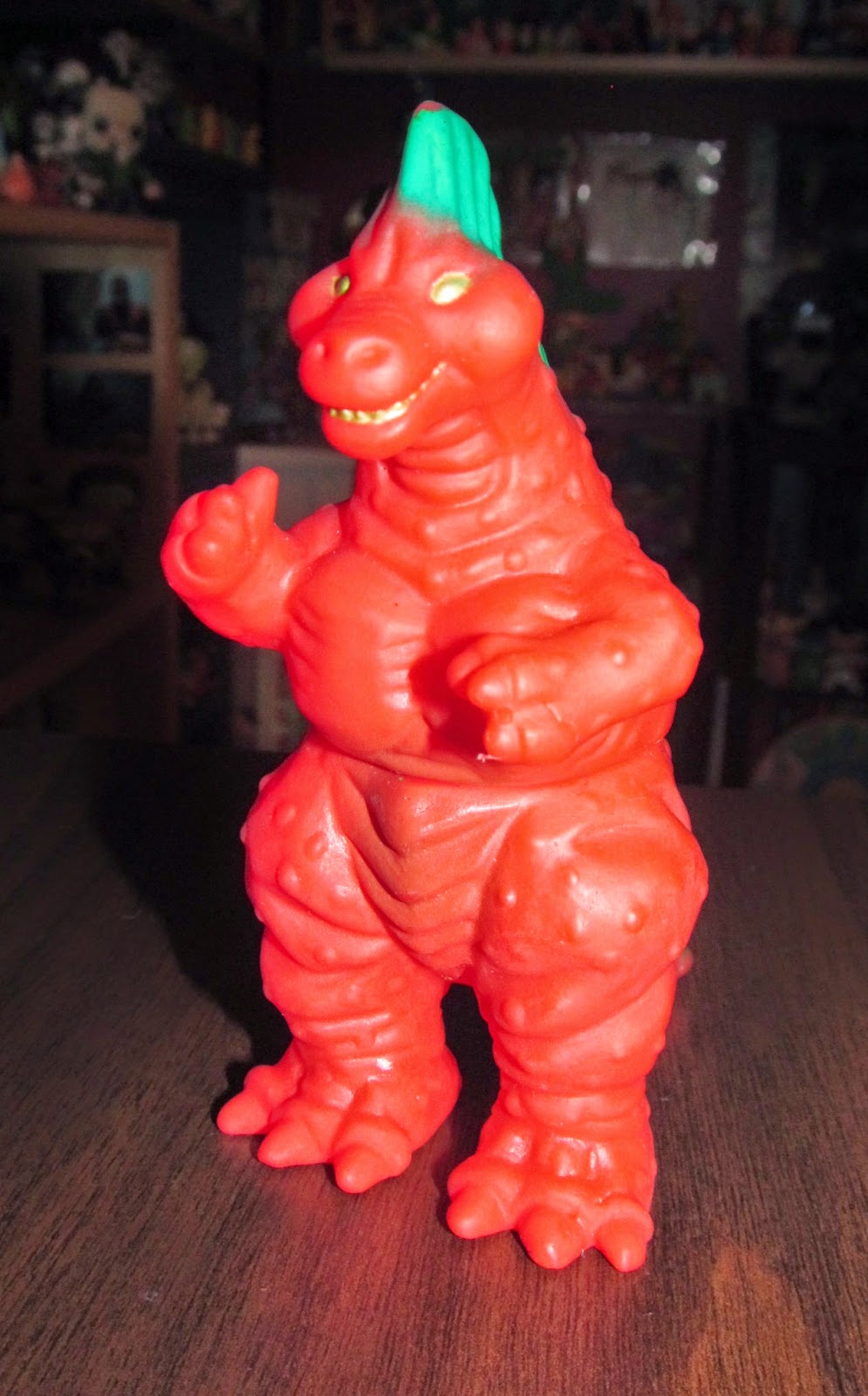 This was one of the best finds in the bag as well, even though I have no idea what it's actually supposed to be. It looks like it might be some sort of cheap, hollow dinosaur, but it gives off way more of a "kaiju" vibe than a dinosaur one. Adversely, it looks more like some sort of tub toy or baby toy than anything else. So... anyone recognize this as anything that's actually something? Or are we looking at a dollar store reject here? 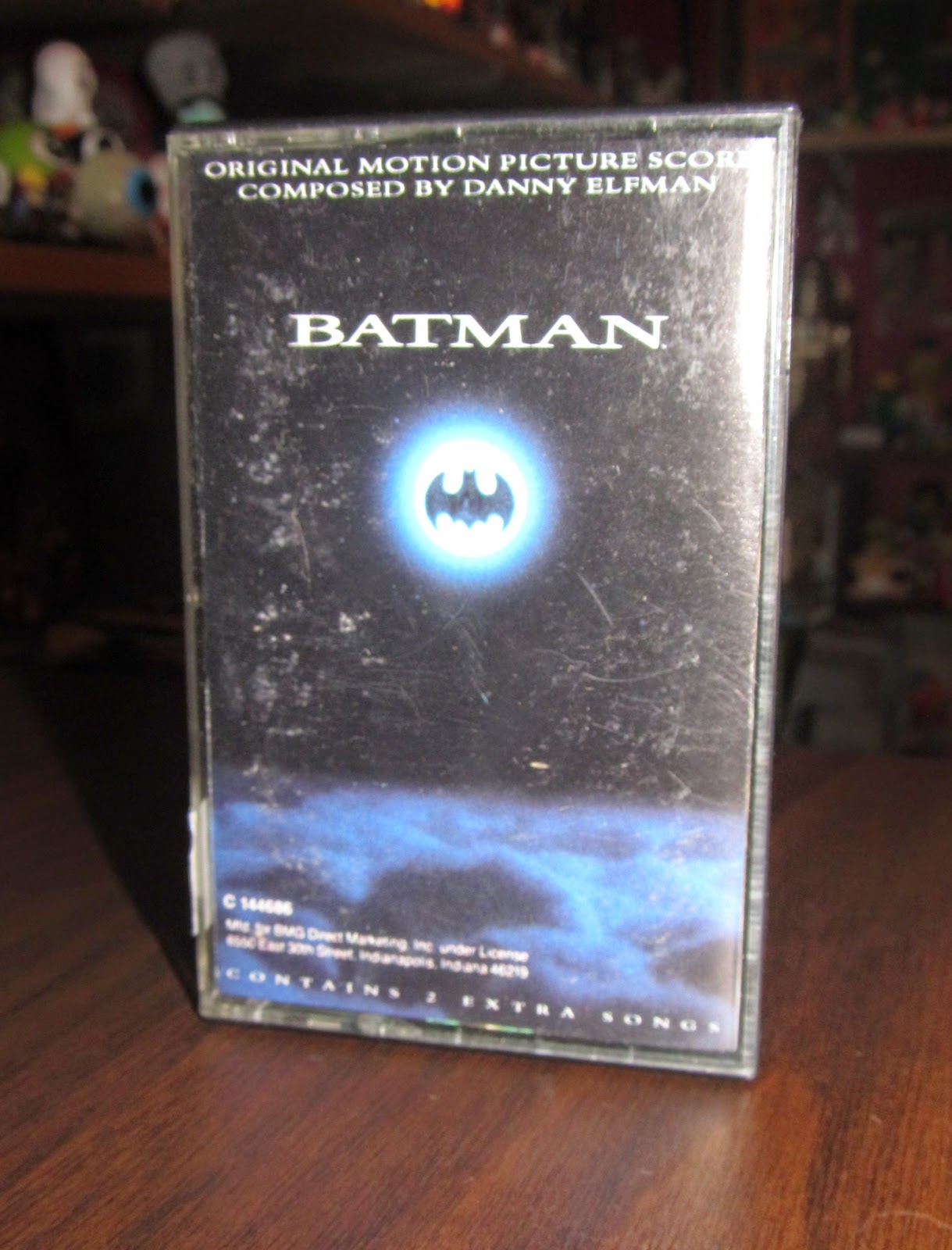 In the cassettes department we have the Danny Elfman score to the '89 Batman film. Back in the days of having to own EVERYTHING Batman because the film was so popular, I did in fact own both the score and the Prince soundtrack, so this find was a real trip down memory lane for me. 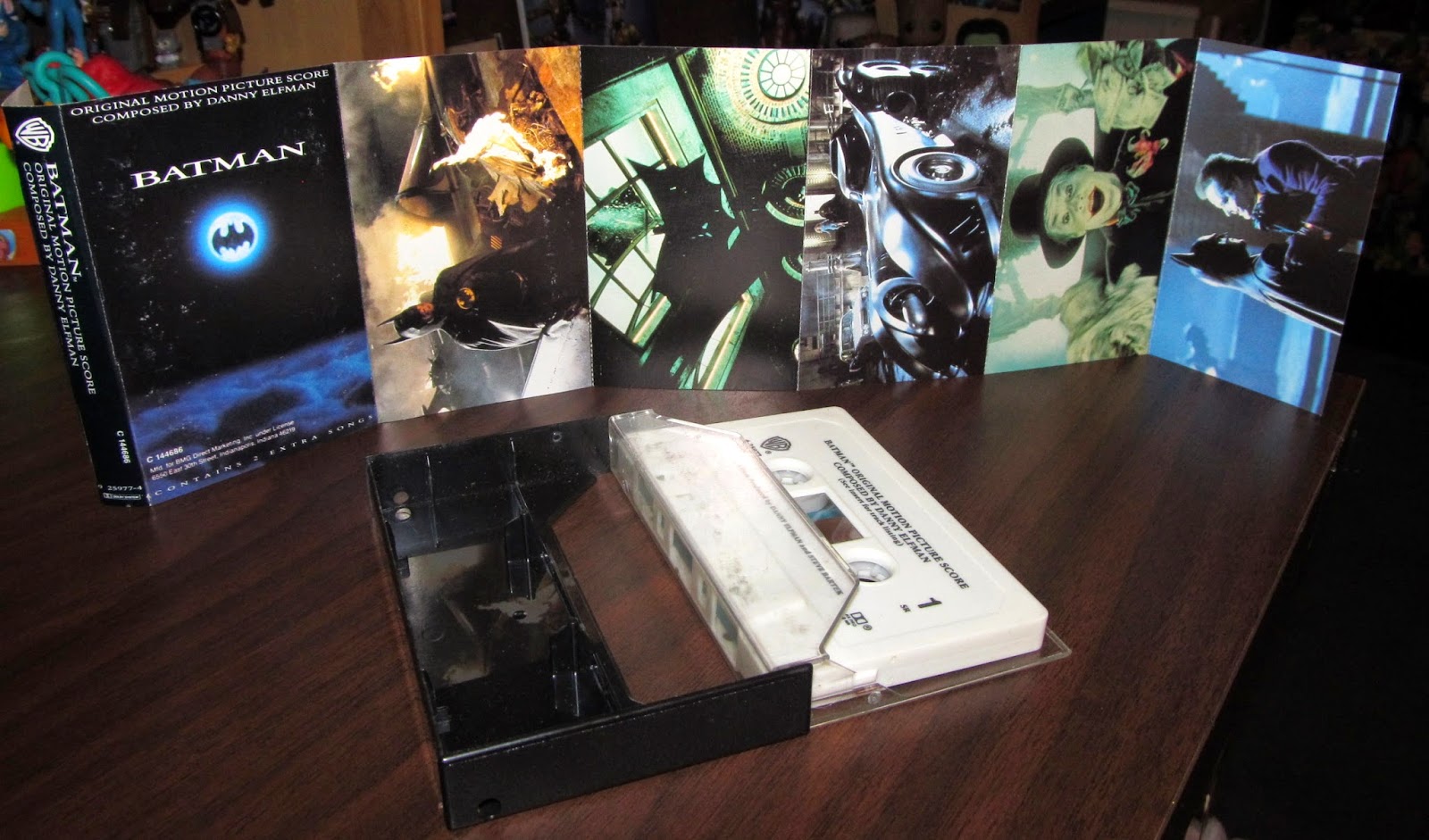 What was especially delightful to me was rediscovering the liner photos. I had forgotten these were even in there, although back when I owned this as a kid I pored over these to the point that they started falling apart. 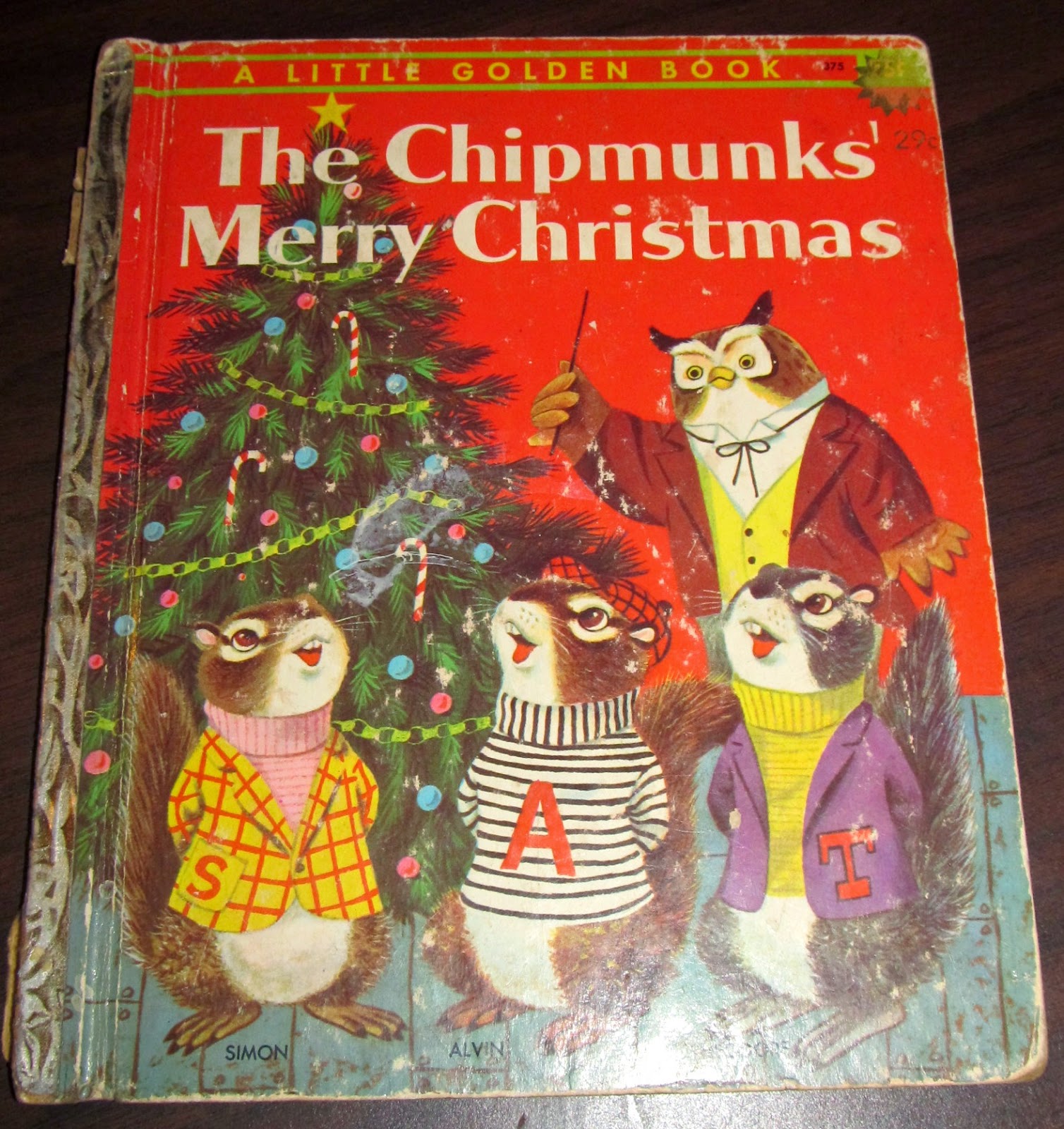 Next up we have this bizarre looking Golden Book from the 1950's. It's bizarre to see them before the more standardized versions of the characters showed up. 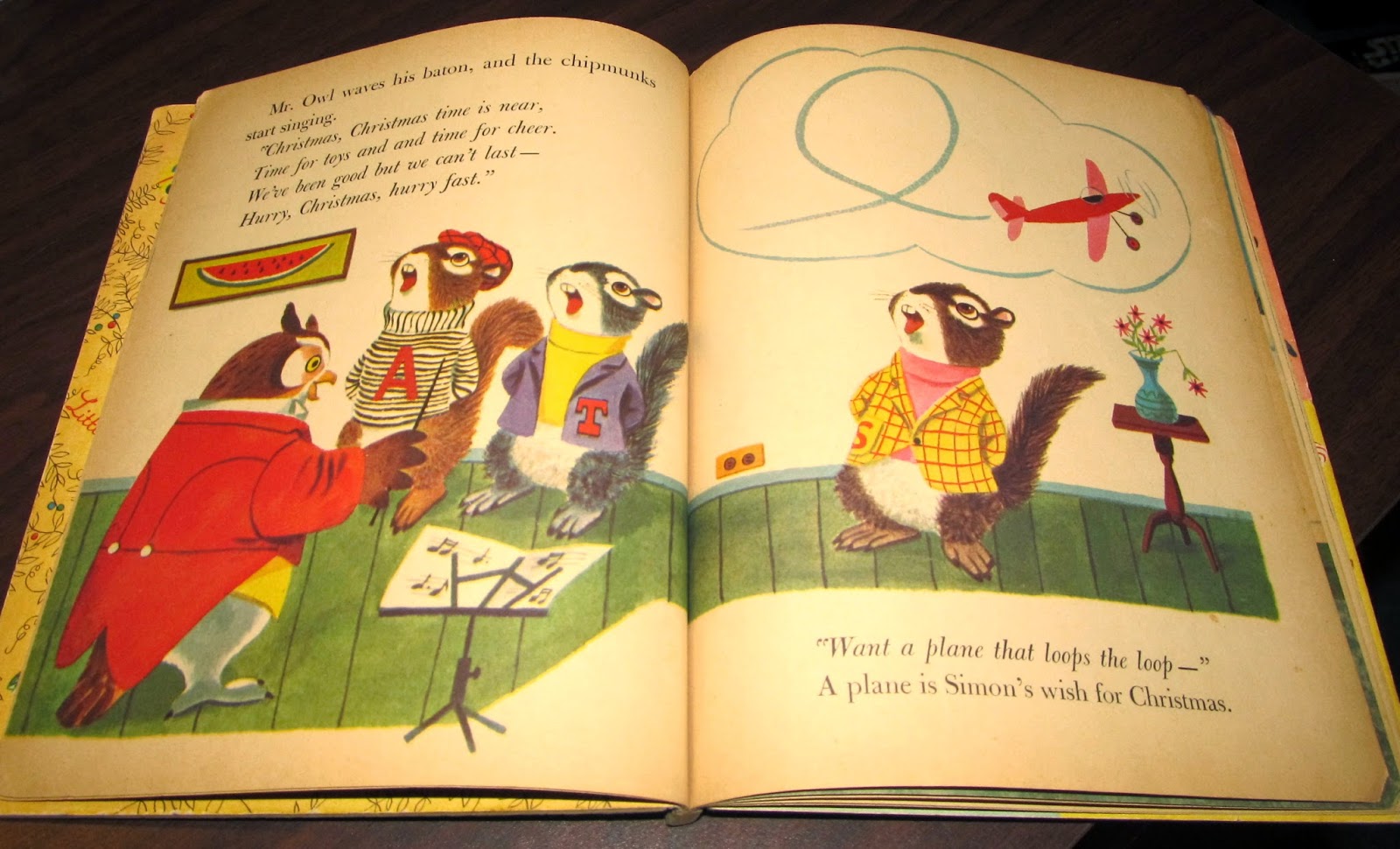 Instead of steadfast Dave as the leader of the song, we have the wise Mr. Owl keeping the Chipmunks on track... which is kind of weird if you consider the fact that he'd actually be a natural predator for them. 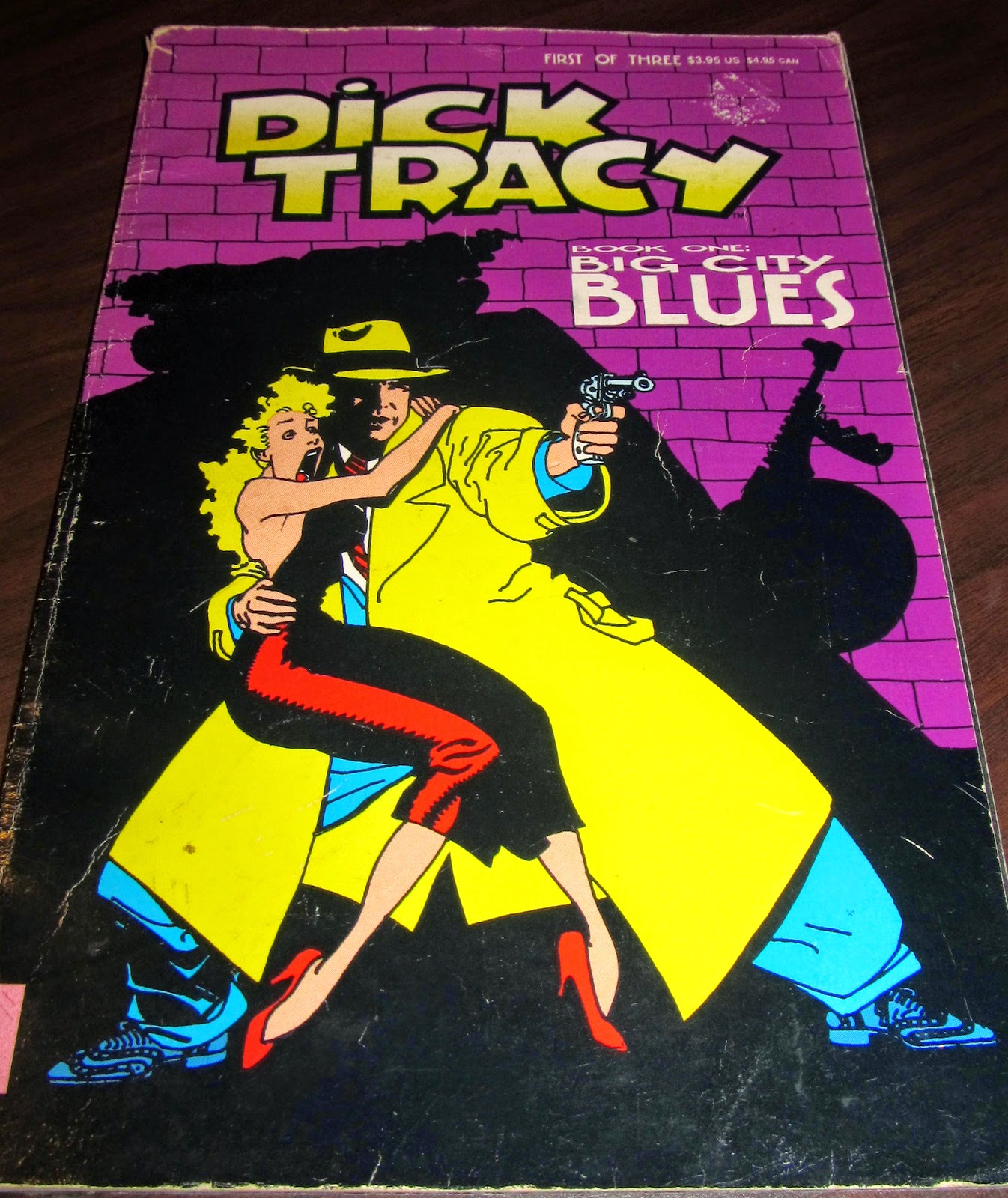 I almost didn't pick up this Dick Tracy graphic novel. To be honest, the most interesting thing to me about Dick Tracy has always been the freakish villains (mostly in ation figure form), and the movie didn't really age all that well, IMO. BUT I flipped through the artwork in this thing and found:

INSANELY cool Kyle Baker artwork!!! So I snapped it up after all. This thing is just freaking GORGEOUS. I mean look at Flattop! Look at Pruneface! Lips Mannis is insane here! Steve the Tramp looks like a nightmare monster from the black lagoon! I hope I stumble across the other two volumes at some point! 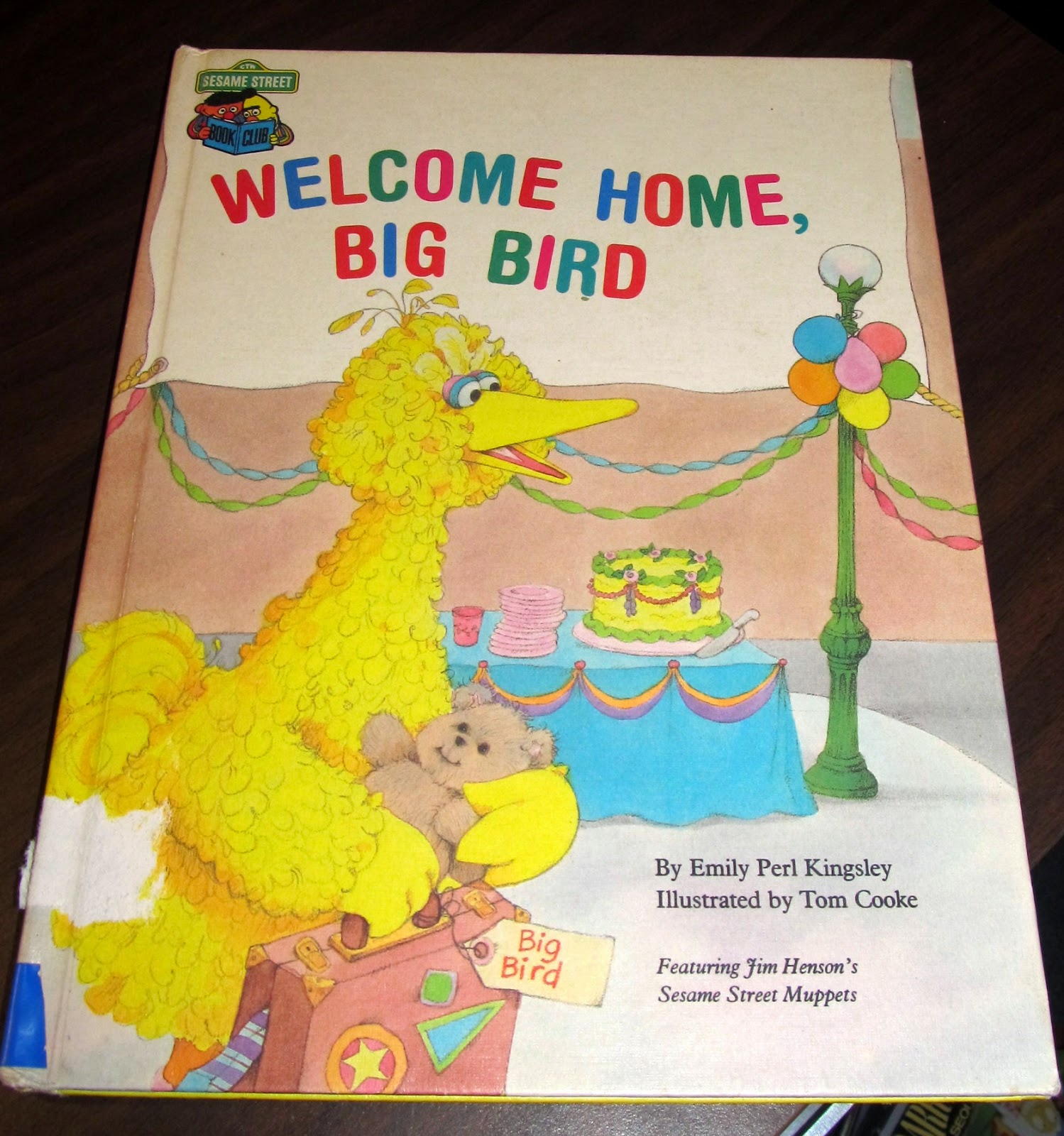 And finally, I thought I'd end on some classic Sesame Street. Can't remember now (without going and finding this book which, let's all fact facts: I'm too lazy to do) but I'm wondering if this was some sort of "Follow That Bird" tie-in? Anyway, Big Bird returns from SOMEWHERE a bit earlier than expected, and instead of finding everyone on Sesame Street moping around ready to slit their wrists over missing him, Big Bird is dismayed to find out no one really cares... and in fact all his friends seem to be celebrating something. If you've already figured out what they're preparing for, then you're smarter than the big yellow bird in this book.

What I especially liked about this one is the fact that Forgetful Jones plays a semi-prominent role. He's the one who has the idea of throwing a party for uh... whoever it is. He's so goldurn forgetful! I don't distinctly remember Jones being portrayed as an actual resident of the Street back when I watched the show. I thought he was always in puppet saloons or out on the range with Buster or Clementine.

That's it for tonight kids! I'll be back soon with more Geeky Goodwill Goodies! Until then, Happy Hunting!