So back on the 25th of April, I posted about a quick stop I made at the Ellsworth Goodwill. That post only focused on the books I found that day, and I said I was going to come back and focus on the toys from that same quick stop. So here I am.

There wasn't a ton I found, in fact it was only a grab-bag worth of stuff and 3 toys that went together as a set, but what I did find was pretty fun. 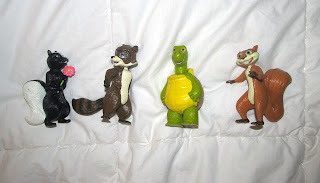 First, in the grab-bag, which I paid 1.99 for, was this set of Over the Hedge Figures. They have some limited articulation, are made of a heavy, solid plastic, and no accessories were included. I don't think they're fast food premiums, but I haven't really researched to see what the toy line included. I've recently started collecting Dreamworks toys in a big way, so I'm boxing them for now because I've never seen the movie, and I have no idea if I'd even like it. If I hate the movie, I have no desire to own the toys.

I'm thinking these are a cake-topper set, but it doesn't matter because they are adorable. I'm probably not going to keep them, but they have this awesome, oldies-feel to them that makes them really charming. I know I could go to this craft store just a few minutes down the road and find a brand new set that look exactly like these though... but who cares? My only real complaint is that the blue team has no goalie. 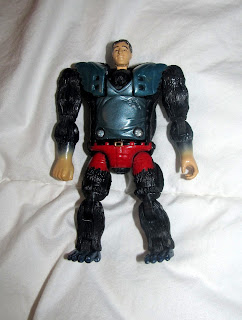 This big weird galoot was a mystery at first, and then I remembered an on-the-card Animorphs Transformer figure I saw at Goodwill a few weeks before I bought this: I took this at Goodwill, but didn't actually buy the toy. The toy above, from the grab-bag is apparently an Animorph named Marcus. I messed around with that toy for about ten minutes, and all during that time I couldn't figure out how to make it look any less like a Gorilla wearing red bike shorts. Not real impressed with the toy, but am wondering now if I should have picked up the Tobias toy on the card to pop up on eBay. 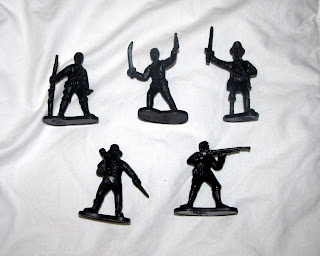 Now we're getting to the real gems of this grab-bag. There was also a black-suited Spider-Man action figure, and a few other toys, like some Little Einstein figures included, but I really didn't feel like featuring those. Instead I want to focus on these kick-ass little black plastic pirate figures. There were 2 complete sets of these 5 figures. As I've mentioned in blog-posts past (here and here) I have a major love for pirates and especially pirate toys. Seriously... check those two links out, especially the second one I love me some cheap-ass pirate mini-figures. So these were pure excitement, trumped only by: 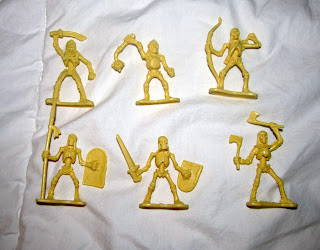 Skeleton warrior mini-figures! Again there were two complete sets of these figures included. I wondered what the deal was with that. Are they all pawns from a skeletons vs. pirates board game? The skeletons are larger and so they're slightly out of scale with the pirates so I can't figure that honestly. They are definitely not pirate skeletons, as they have a more viking or medieval feel to them. But they all have the same numbering and lettering system on their bases which means they are almost certainly from the same company, so I just don't know. What I will tell you is that I literally bought this grab bag for these two sets of plastic mini-figures. Look at them! They. Are. Awesome.

So that does it for the grab-bag. Now onto the single items I picked up to make a set. 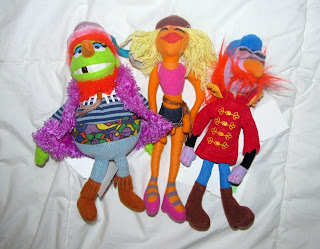 Three members of Dr. Teeth and the Electric Mayhem!!! I didn't find an Animal or Zoot... but Dr. Teeth, Janice, and Sgt. Floyd Pepper all made it home with me. I've mentioned on a few occasions before this that gosh DARN it I don't collect bean-bag characters... but between a bunch of food mascots and other muppets, I now own about 10 of them all together. I need help. I can't help but feel like Janice looks a little more like a Bratz doll than she should: 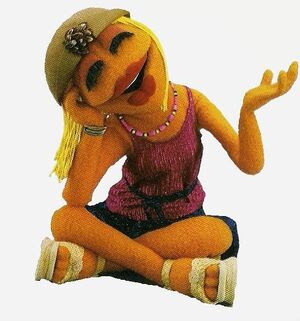 ...but the guys need her around to keep it from being a total Muppet sausage factory. I paid .99 cents apiece for these awesome, awesome guys.

That's it for tonight guys! I'm dropping off the radar for a couple of days due to a work trip, but I'll be back soon with some Geeky Goodwill Goodies. So until then, Happy Hunting!
Posted by Derek Ash at 6:42 PM