I found out about the Boxsome... service I guess you'd call it... over at Jaime Hood's site, Shezcrafti. She was geeking out so completely hardcore that I needed to go and look at the site, just to see what the selection was. 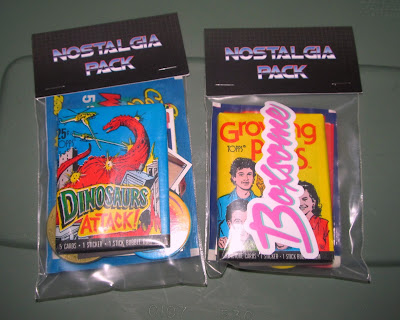 MY GOD. So many old wax packs!!! Harry and the Hendersons!!! I remembered having a handful of those when I was kid. But what really caught my eye were two of my most obsessively collected series from childhood: Topps' Dinosaurs Attack! and ALF. More on those later though. They might have been my no-brainer items going in, but when I got looking around at all the different options, two other properties jumped out at me: The Dark Crystal and GROWING PAINS!!! That just seemed ridiculous and awesome in equal parts. 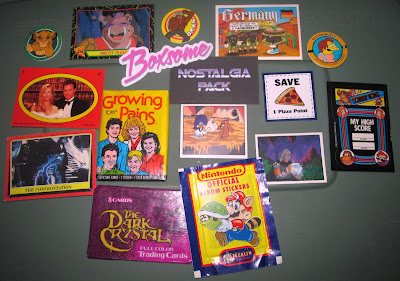 So I ordered not one but TWO of Boxsome's Nostalgia packs: an ALF/Dinosaurs pack and a Dark Crystal/Growing Pains one. But the exciting thing about Boxsome is that not only do you get the two wax packs you ordered, you also get ALL THIS EXTRA AWESOME STUFF!!! Do you see the loose Batman cards and TMNT and POGS and Nintendo stuff... and just LOOK AT IT ALL!!! These nostalgia packs are designed to be mini playgrounds full of the things we loved as kids. I cackled with pure, ferocious, lightning hot, DELIGHT as I discovered each new item. 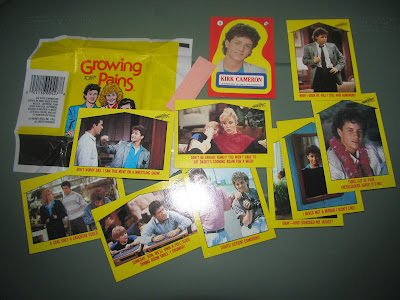 In the first nostalgia pack I had the Growing Pains and Dark Crystal wax-packs. I decided to leave the Dark Crystal pack sealed for the time being, but Growing Pains I had to see. I tore them open and fanned them out in front of me like Ebeneezer Scrooge going over accounts. And I was NOT disappointed. I began to immediately understand that these cards were probably geared at young ladies with a major crush on Kirk Cameron. There was a great deal of focus on Mike Seaver compared to the other characters. It still does a great job of taking me back to the days when I used to watch this show religiously. 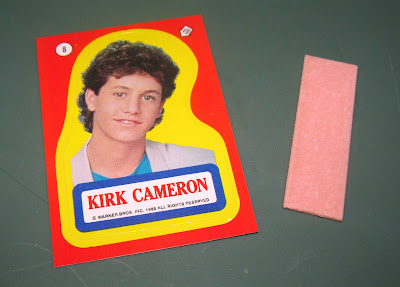 Of special interest in the pack were the Kirk Cameron dream-boat sticker, and the INTACT stick of Topps gum. It SMELLED exactly like I remember Topps gum smelling. I was immediatley 9 years old again, walking home from the convenience store up the street from my house, looking through the Garbage Pail Kids I didn't have the patience to wait and open at home. 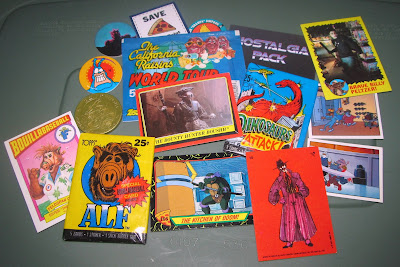 Here's the second Nostalgia pack. This time around it was straight up stuff from my childhood. This was my favorite of the 2 packs for a few different reasons... including the extra ALF series Bouillabaseball card!!! Plus check out the Joker sticker from the Batman set, which if I recall is actually concept art from the movie, not just some random Joker artwork. There was also a plastic gold coin from Star Wars featuring Ben Kenobi! Plus check out the awesome Turtle and Star wars cards included here! There was another extra included that made me pee my pants a little because I didn't even know it existed... but more on that later. 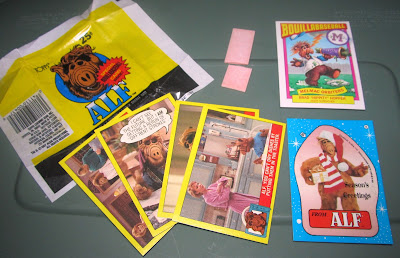 So I tore into the ALF pack with one real goal in mind: get another Bouillabaseball card! See, when I collected these as a kid it was all about those Melmacian Sports collectibles. I liked some of the photo cards from the show, and I loved the stickers as well, but I was spending my quarter on that one card to be honest.  Opening this wax-pack I was flooded with nostalgia as I realized I had once owned every single one of these as a kid. Instead of callously chucking the packaging like I would have when I was ten, I lovingly folded it back into shape and tucked it into the binder sheet I'm preserving these in. Again, the smell of Topps gum assaulted my nostrils to make the experience complete. In fact... I am almost ashamed to admit it... but I popped this one in my mouth and chewed it. Just to see. And you know what? That shit was nasty. It turned to pink card-board flavored grit-slime in my mouth and I scraped it out into the kitchen trash while my family laughed on. Live and learn. 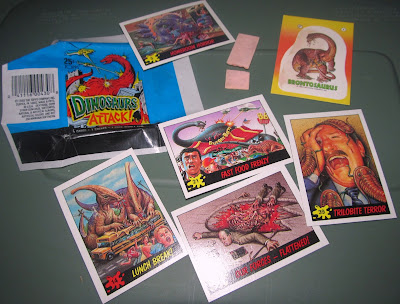 Next up were the Dinosaurs Attack! Cards. Some people speak lovingly of the old Mars Attacks card series that was the precursor to these, but I just missed the boat on those. When I was a kid, my horror threshold topped out at Dinosaurs Attack! These were gory and hilarious, and best of all, I GOT that they were supposed to be both gory and funny at the same time. My absolute favorite card as a kid is the one in the bottom left corner of this picture... the Lunch Break! card, featuring two (what appear to be) parasaurolophus (traditionally plant-eating dinosaurs) munching on the contents of a school bus full of middle-school kids. If you really look closely at some of these cards though, you see how detailed and disturbing the gore actually was... and done in such an incredibly clever slap-stick absurdity that the balance is beautiful to behold. 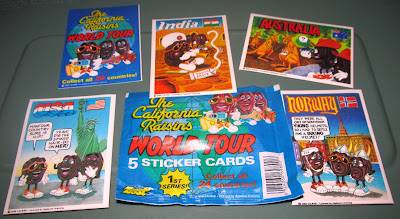 The last thing I want to mention is the pack of The California Raisins World Tour Sticker cards that was included as an extra. LOOK AT THESE THINGS!!! I don't know if Tommy included this because he knows from this blog what a HUGE Raisins fan I am:

Or if this was just random happen-stance... (there was a single card from the same series in with the other pack too!) But I LOVED this pack as much as anything I had actually ordered. I want to track more of these down now!!!

All in all, I can't recommend Boxsome ENOUGH. If you were a card-collector in the mid-to-late 80's you will find a GOLD MINE on Boxsome. PLEASE for your own good, go check it out. The prices are incredibly reasonable, and the packs are such a random load of fun that you will have absolutely ZERO buyer's remorse.

And if all my babbling has not been enough to get the point across, THANK YOU TOMMY DAY!!! Boxsome is an incredible idea and I hope you keep it going forever! You obviously take the time to balance the nostalgia packs in great ways, and the thought really shows.

(P.S. Just writing this post was enough to get me craving more Boxsome... so I popped over there and ordered another pair of Nostalgia packs tonight! I'll share them when they come!)

Anyway, that's it for tonight kids! I'll be back with some Geeky Goodwill Goodies sooner rather than later... so until then, Happy Hunting!
Posted by Derek Ash at 6:24 PM