Giant Bots and Legs from Butts.

So here's a pile of loot from last fall or early last winter, sometime shortly after Thanksgiving, from a trip to the Brewer, ME store. It's a nice haul, and it's waited a while to finally be seen. So let's dig in! 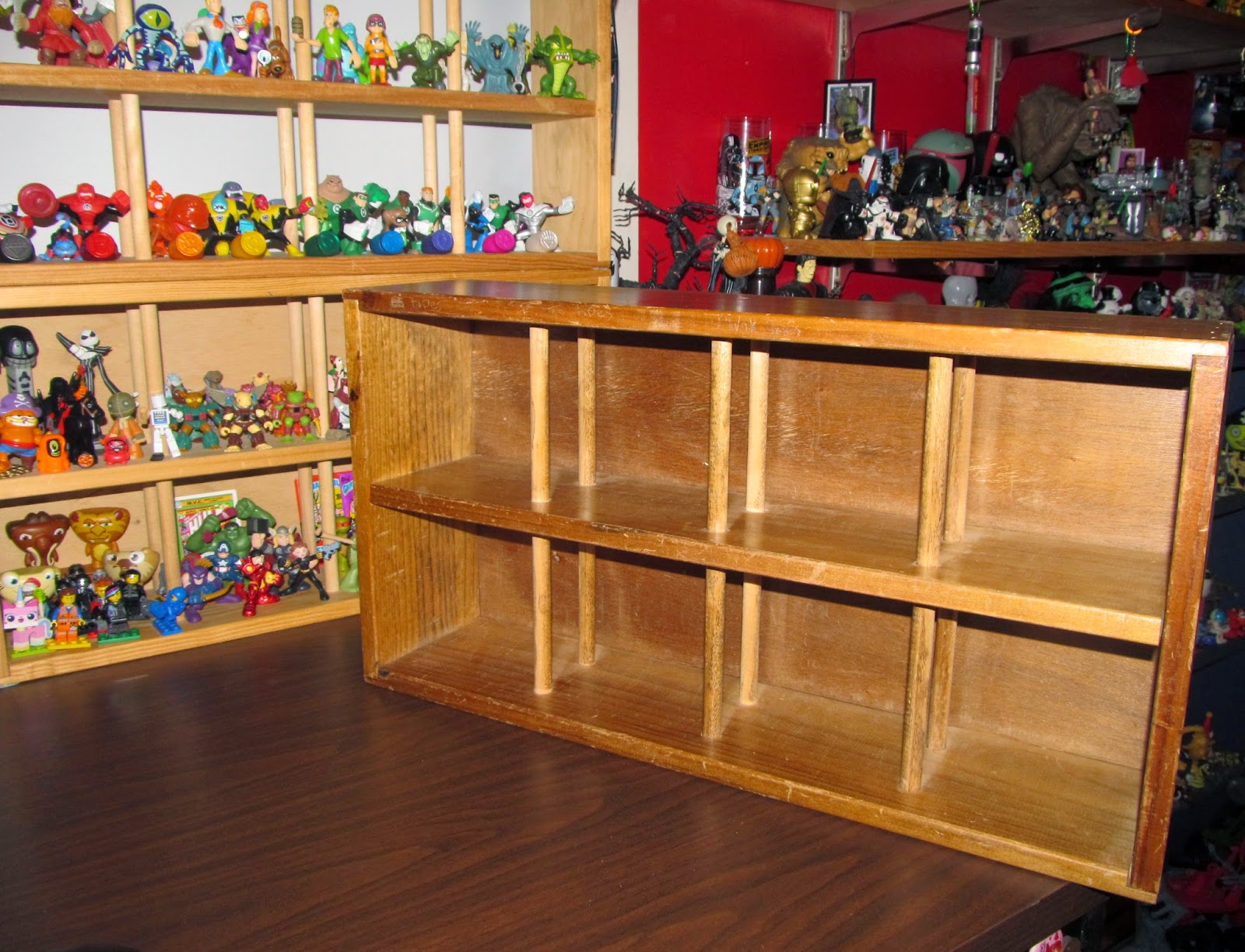 Right off the bat, I am ALWAYS on the lookout for these Napa Valley CD cases, because they so perfectly work as little knick-knack shelves to display toys in. So bringing home my THIRD case was pretty exciting. All of these are on my desk, facing me, so I make sure to put all my very favorite toys on them so I can look at them all the time. 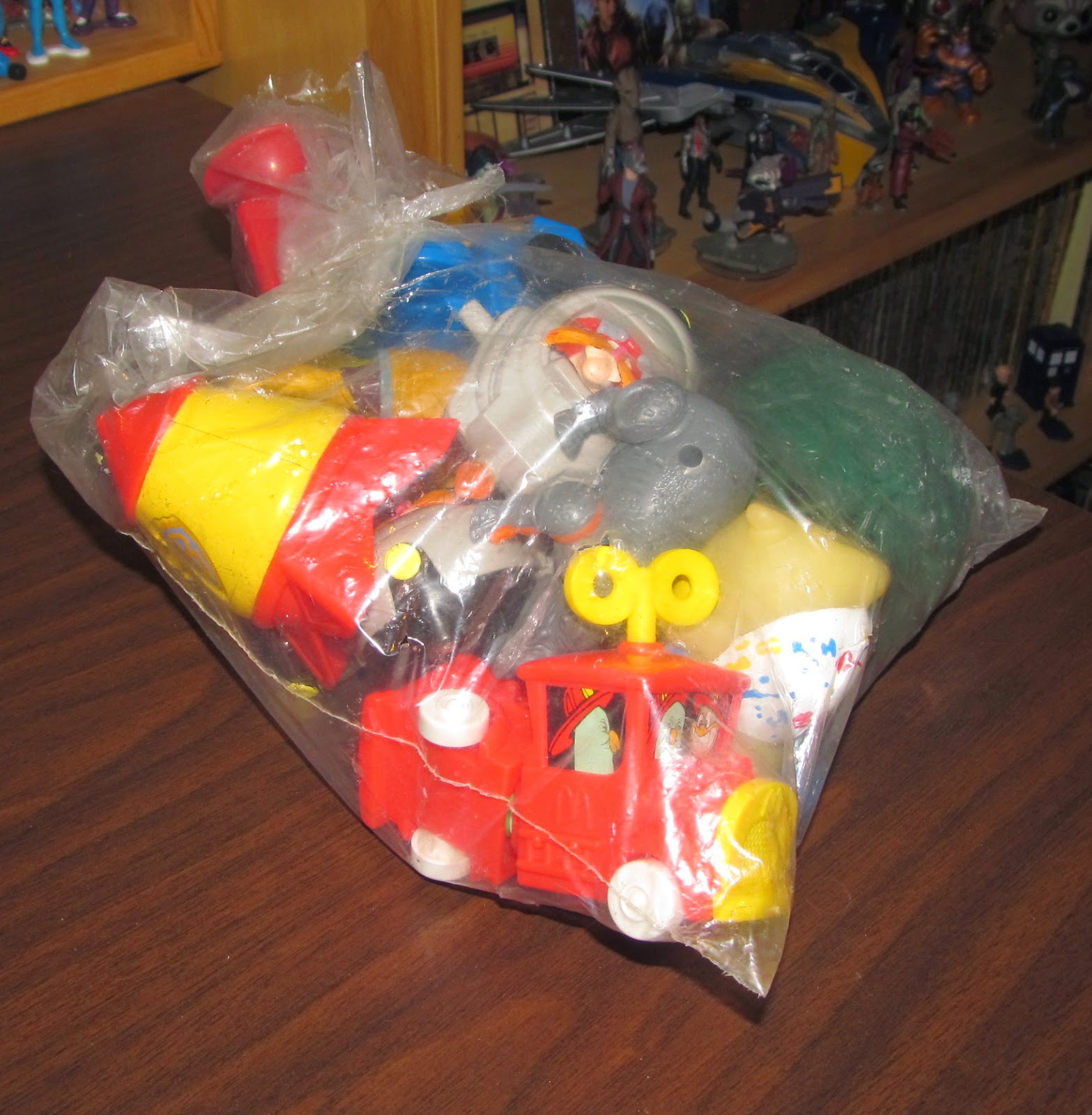 I brought home a pretty big grab-bag too, so let's see what's inside. 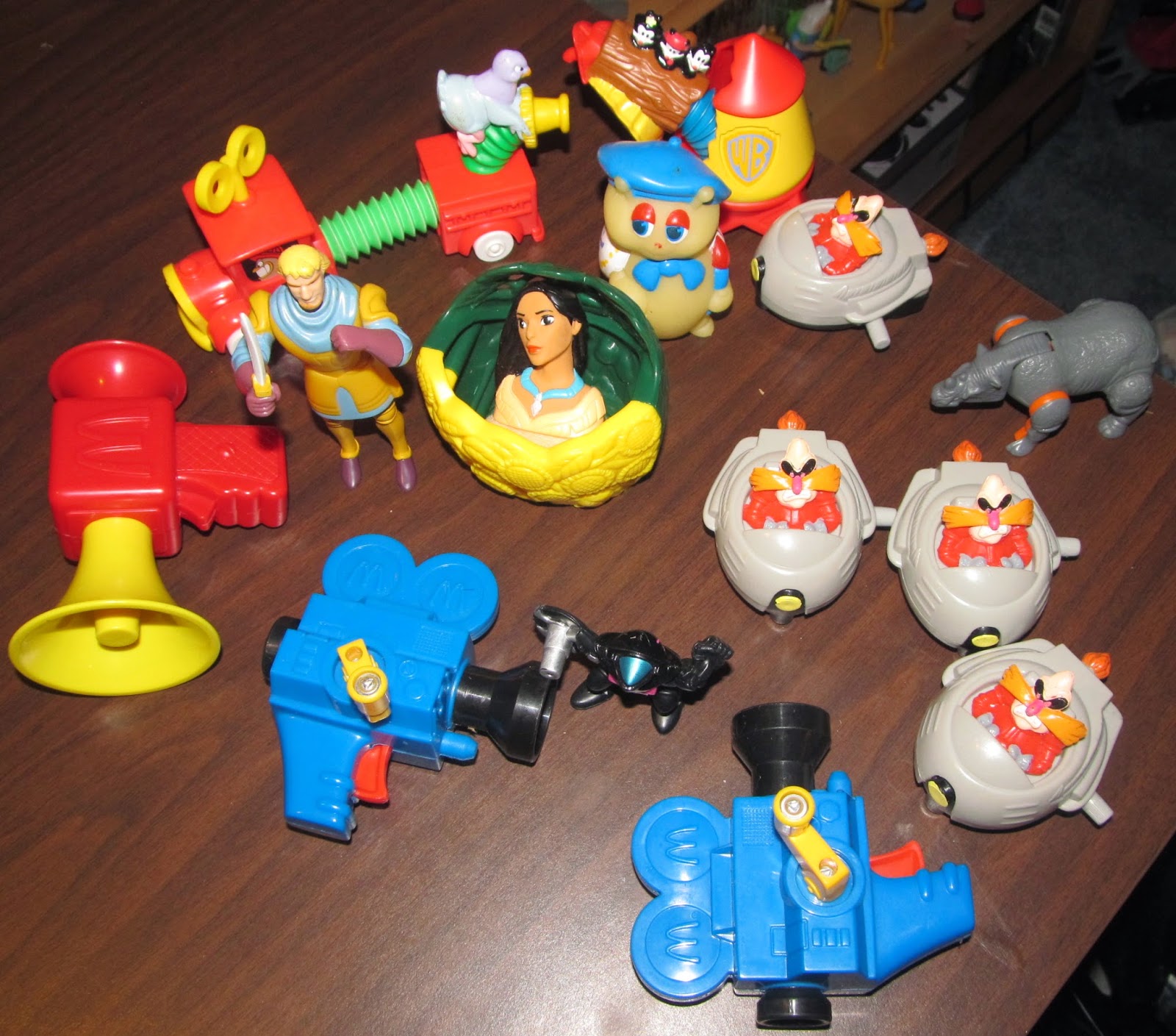 Here are the contents, all piled together, and as you can see, there was a pretty diverse collection of good trapped in this bag, waiting to be set free.

First up a couple of Animaniacs toys. I like Animaniacs toys, don't get me wrong... but I'm not a huge fan of those weird, plastic accordion tubes that are holding these together. They're weird, and as a kid, any toys that had them attached would ALWAYS get stretched out too far and destroyed. So as much as I like the characters, I passed these along to a new home. 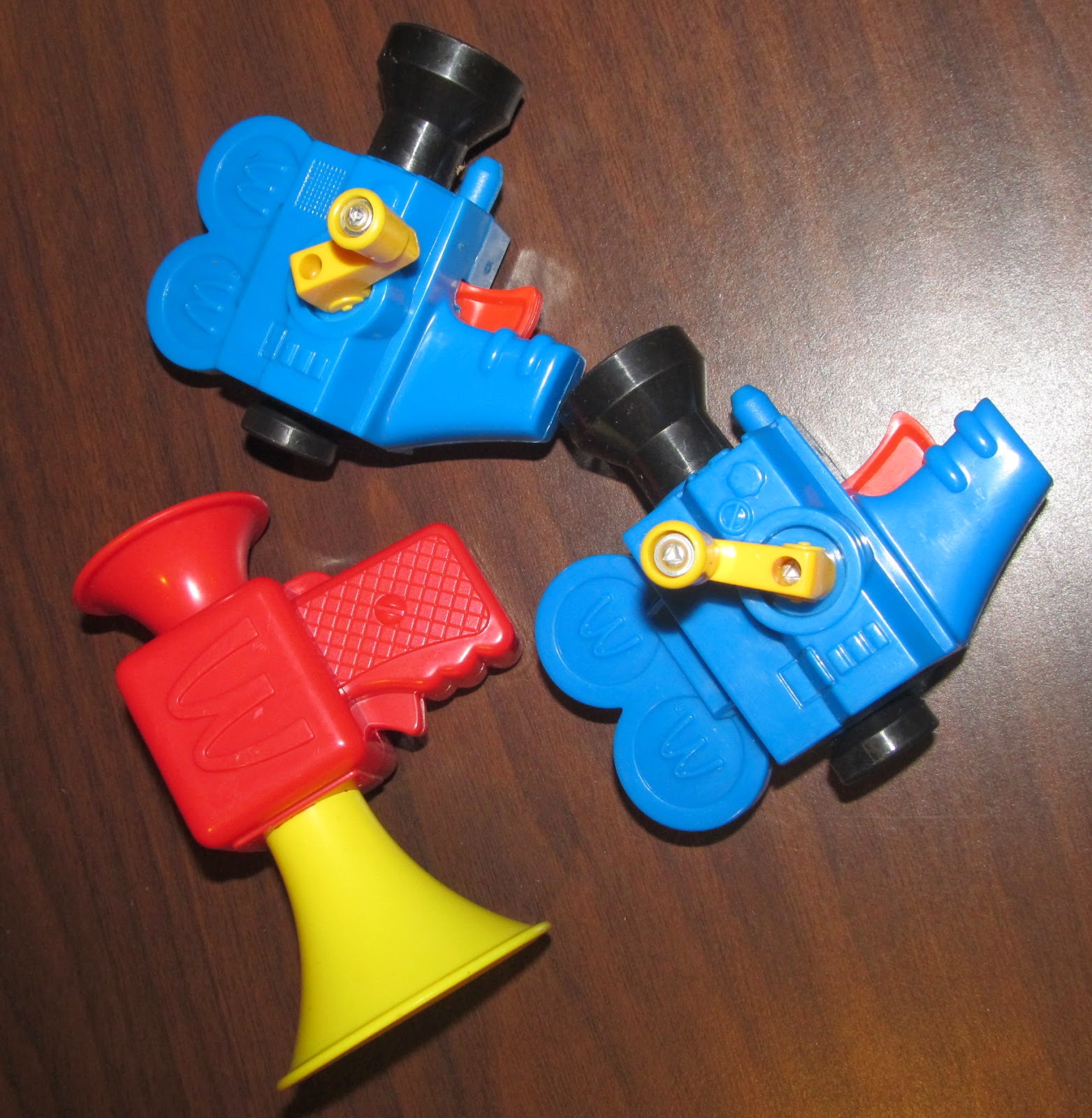 These are from 1993's "Makin' Movies" Happy Meal toy line. They weren't a licensed property, so this was just one of those McDonald brand sets of toys that I absolutely ADORE. I missed these as a kid, mainly (probably) due to the fact that I was 15 when these came out and was past caring about Happy Meal toys (for a while). But I can love them now. I do love them NOW. 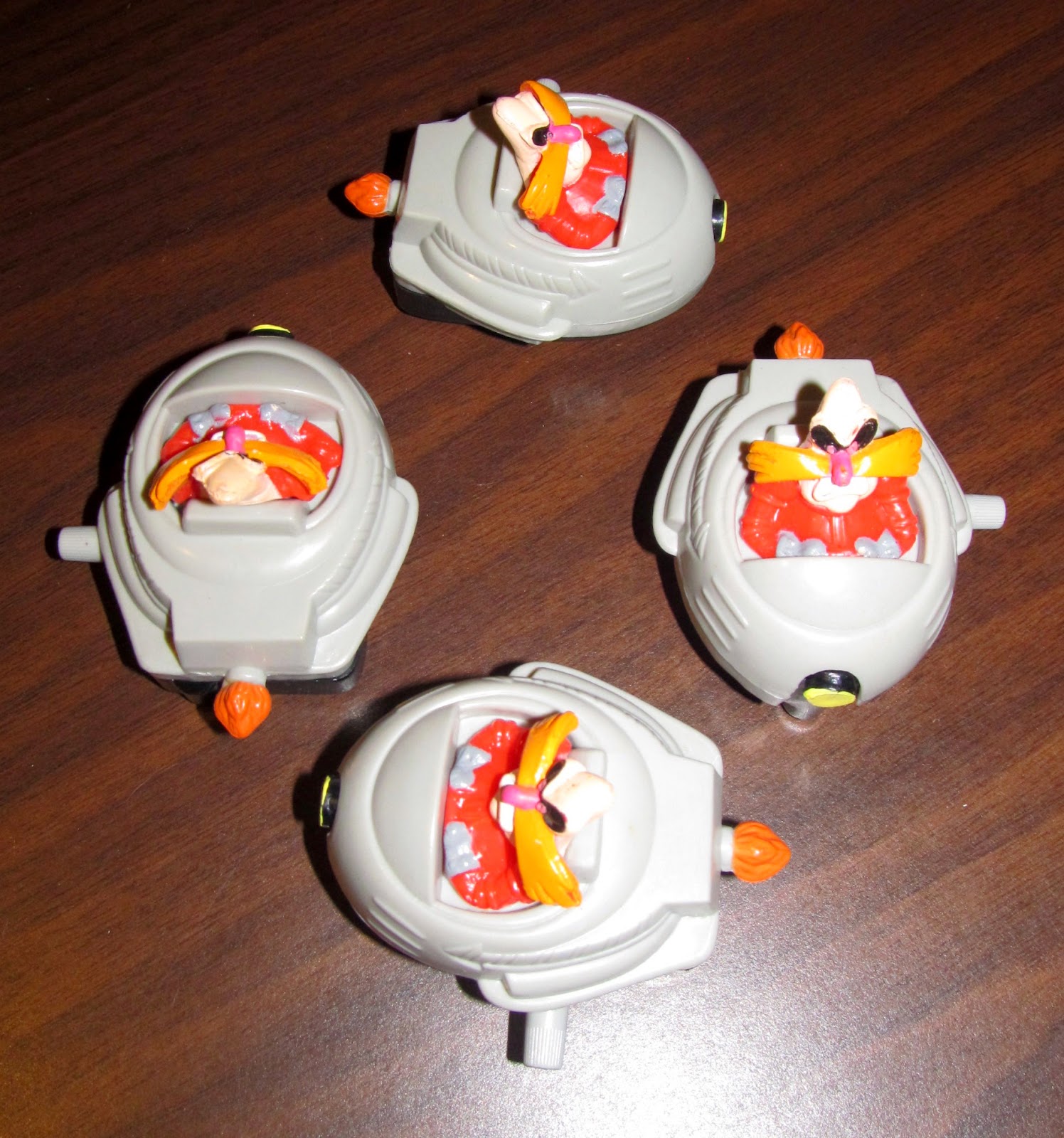 There were four... FOUR of these Dr. Robotnik (or Dr. Eggman or whatever) Burger King toys in the bag. That is all I have to say about that, really. 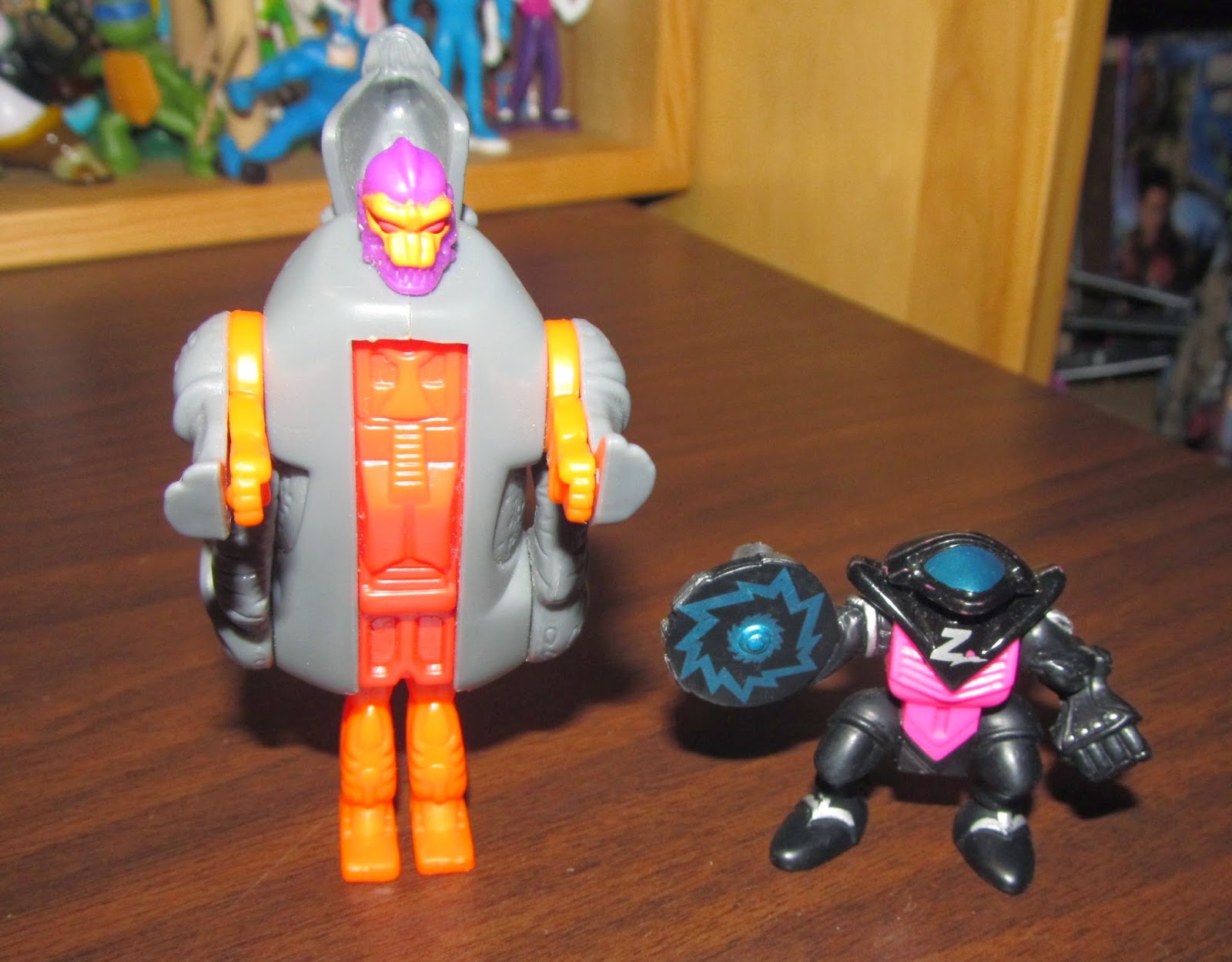 These are quite possibly my two favorite items from the bag. The first one is "Rhino" (no not "Rhinox" apparently...) and despite not being even a LITTLE BIT of a a fan of Beast Wars Transformers, I have a ridiculous affection for all of the Happy Meal Beast Wars Transformers toys. It's true! I currently own three of them, and I have no idea who the heck they are, but they are all so impossibly awkward in their design that I can't help but love the ever-loving HECK out of them. THIS ROBOT SPROUTS ITS LEGS OUT THE BUTT OF A RHINOCEROS. Your argument is belong to us.

Beside that beautiful and artfully designed Transformer, I also found a Z-Bot in the bag! This fellow's name is Buzzsaw, and he is yet another one of the Z-Bots from Burger King, in other words: one of the 5 Z-Bots ever produced that I am actually interested in owning. (I have Turbine, Jawbreaker, Skyviper, and Buzzsaw here. I only need Bugeye to complete the quintet).

I so completely remember the first half of this commercial (before the Z-Bots are introduced)... it's downright creepy. 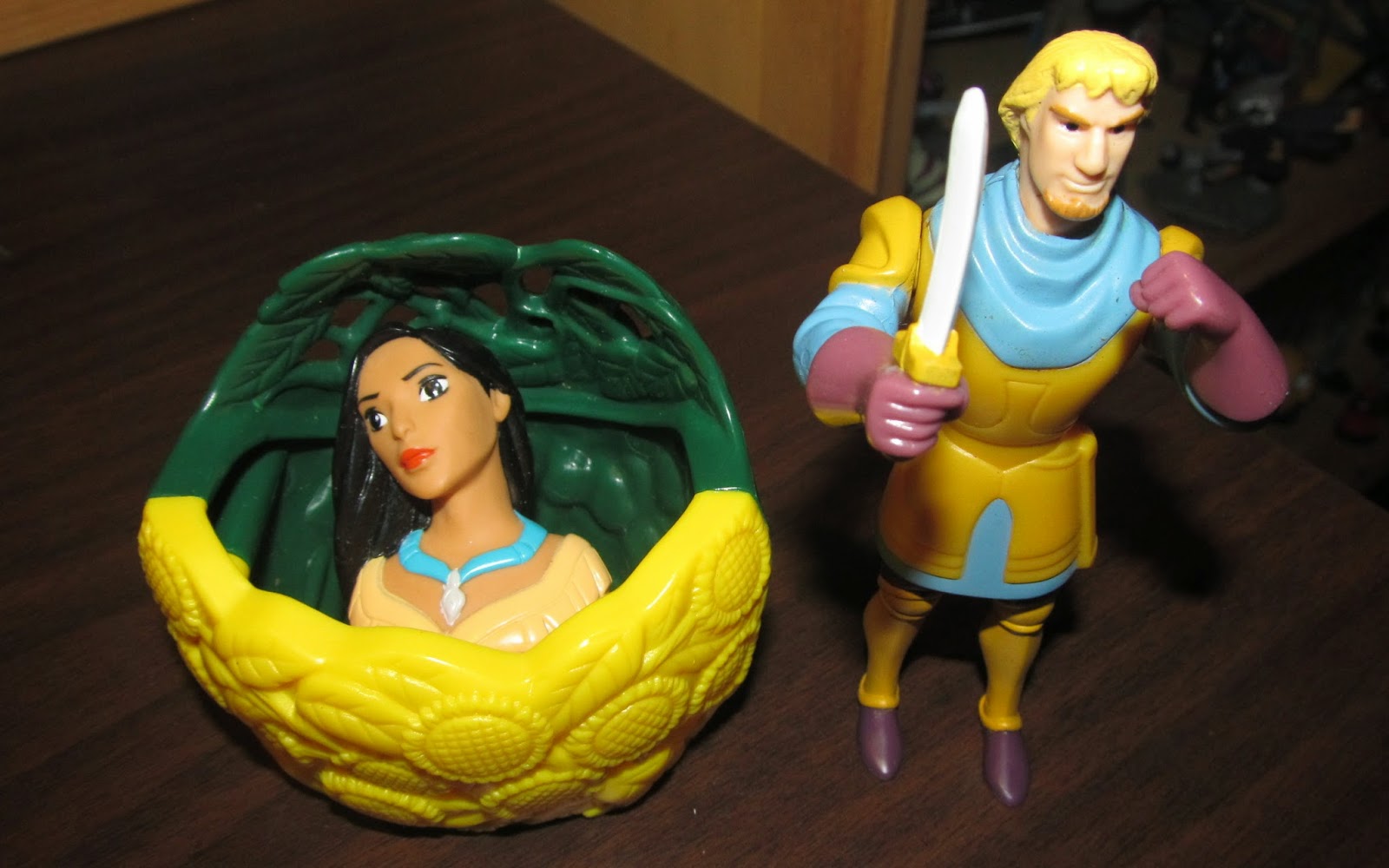 Creepy Pocahontas head in a basket, like some weird Disney Native American version of SE7EN, and Phoebus from the Hunchback. The random Disney characters Happy Meal toys portion of our program is now complete. 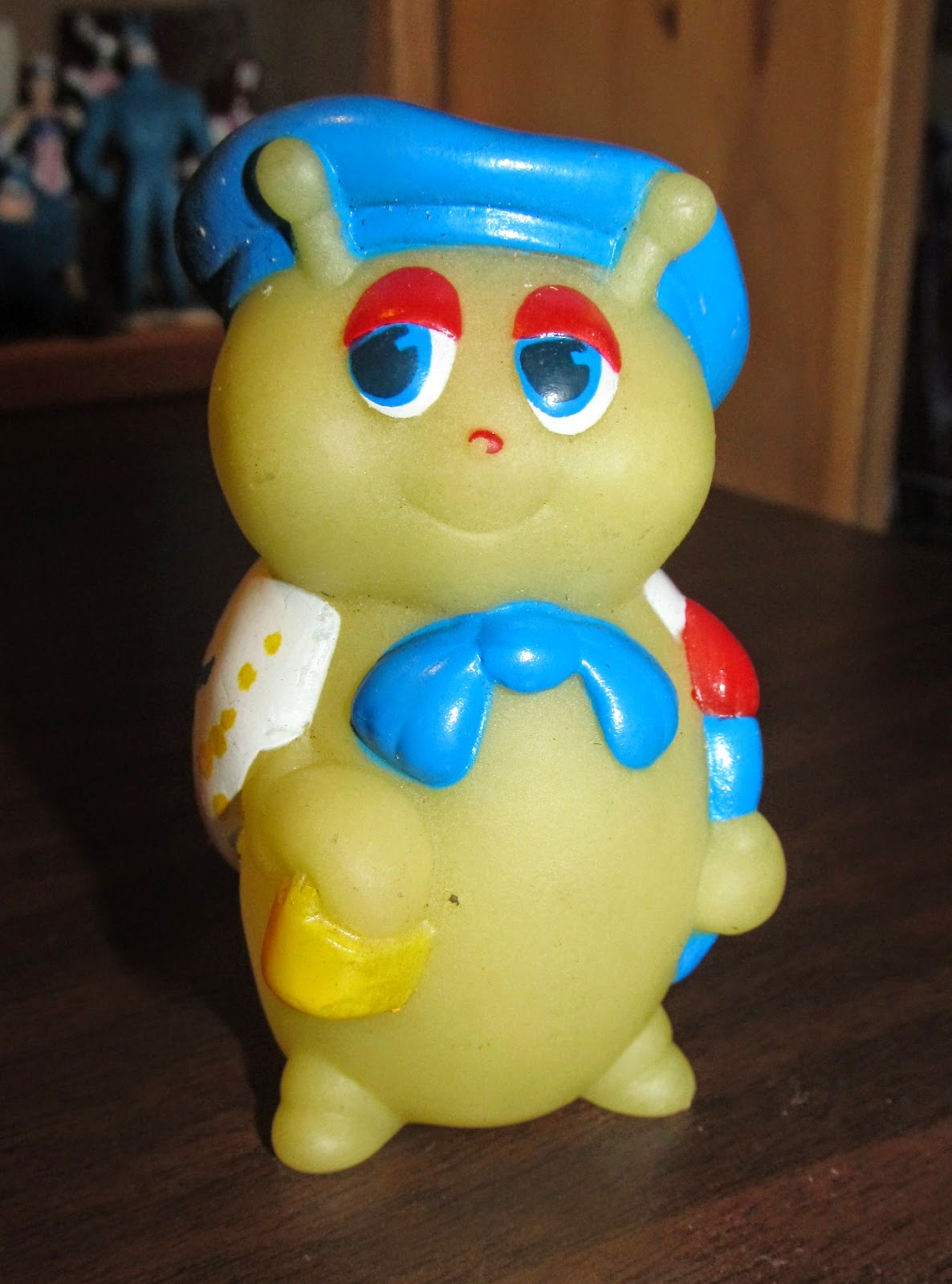 Another HUGE highlight of the bag is this little guy right here. This is Doodle Bug. He's from the Glo Friends line that accompanied the Glo Worm line of toys, who all additionally starred in a cartoon. I used to have a Glo Worm. The original. The long green Mr. Hanky shaped toy from the 80's.


I LOVED MY GLO WORM. So much in fact that I was constantly running through batteries and in need of another glo-fix. It got bad man. But I got help. And now I'm the man I am today and I am not defined by my Glo-diction. Except now here's Doodle Bug.

And I'm back to square one. 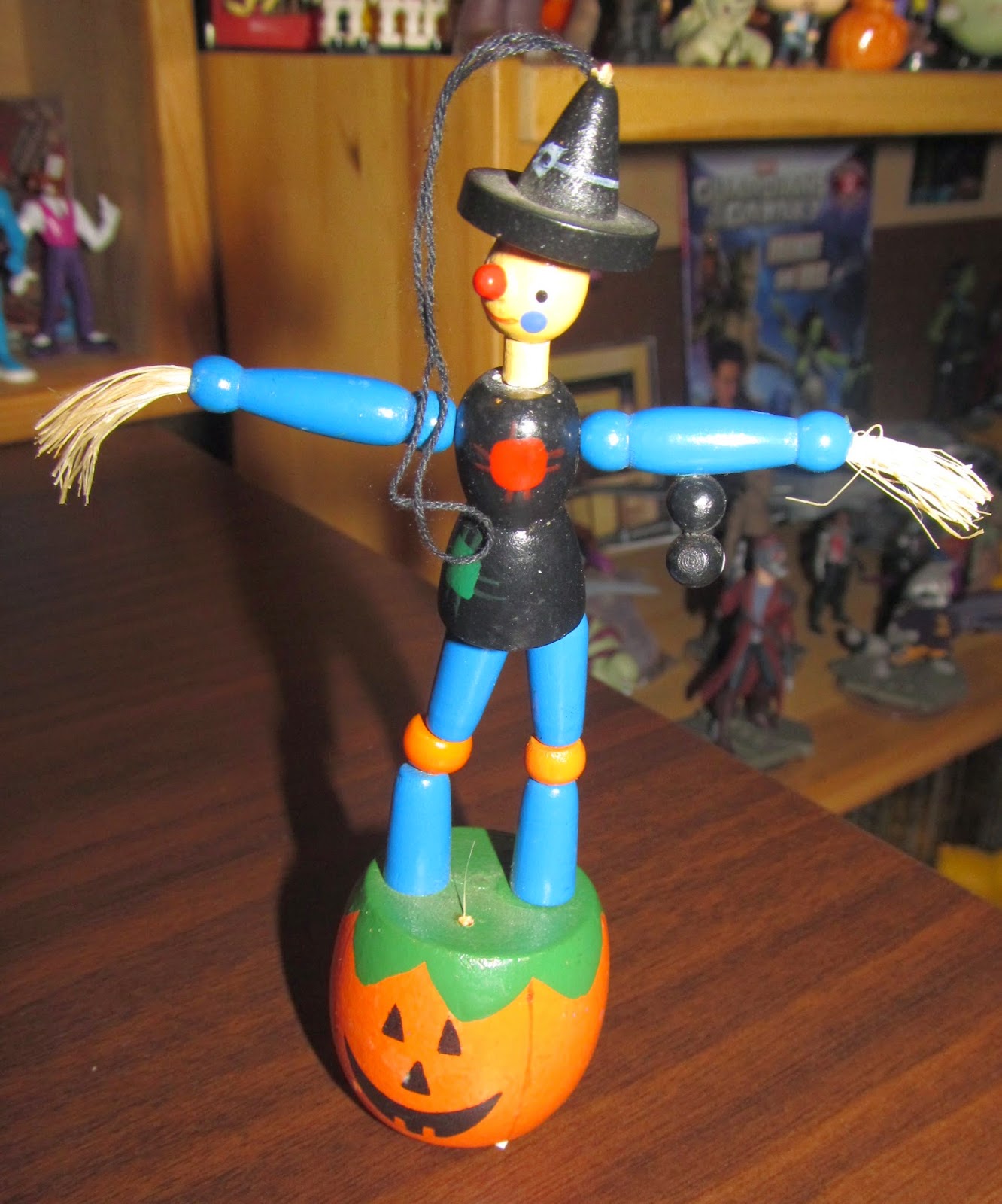 I am a sucker for these wooden push-puppet toy things, especially when they are holiday themed. I didn't notice when I took the picture, but the black thing on its underarm is not a weird mole that needs attention. It's actually a crow that should have been flipped up the other way so it would be facing us.

Now for the books! 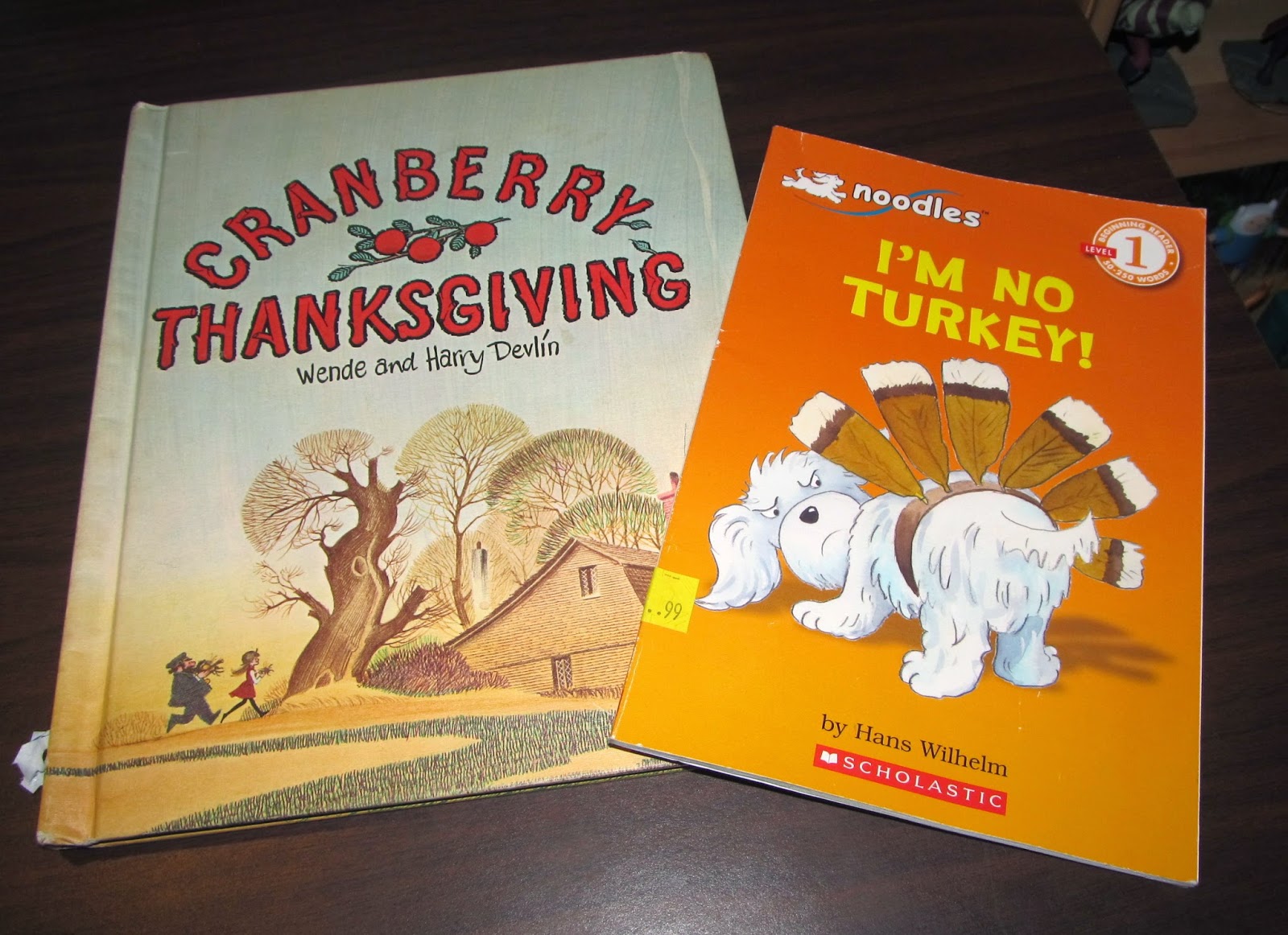 A couple of nice Thanksgiving themed books to read to my kids when the holiday rolls around. 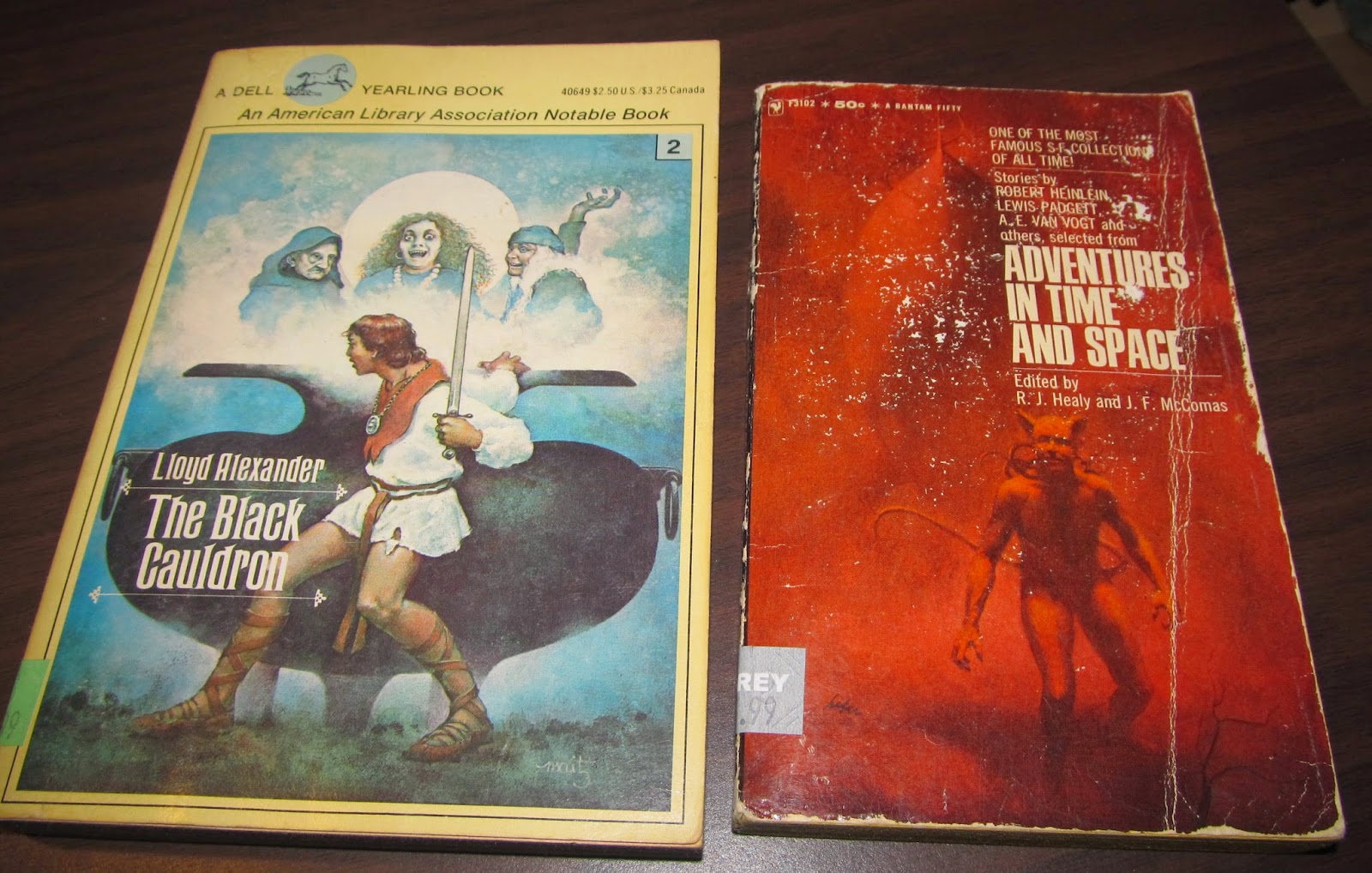 I picked up this copy of Lloyd Alexander's The Black Cauldron specifically for the cover art. It is amazing. That's part of what convinced me to pick up Adventures in Time and Space as well, because I liked the cover art so much... but I also hope that one's a good read as well. I already know the Black Cauldron is a good read, as this is like... the 3rd copy I now own, and I've read it almost as many times. 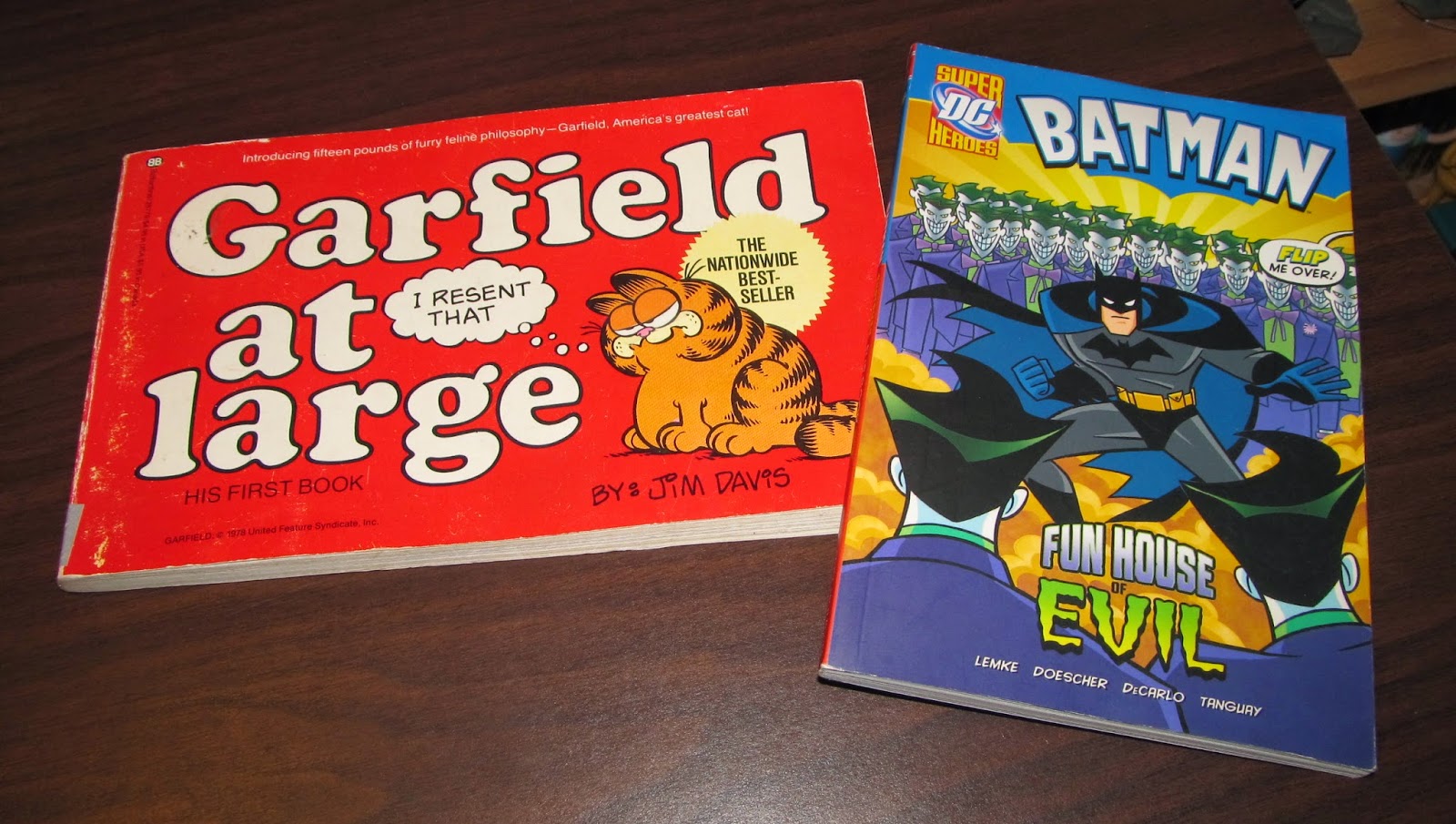 These were both nice surprises. I have a long-time love of Garfield because of my childhood association with it. So finding a copy of the very first collection of Garfield strips was a must-have. The Batman digest is nice because if you flip it over, there's a Superman comic book on the other side! These are both done in the style of their respective animated TV serieses as well. 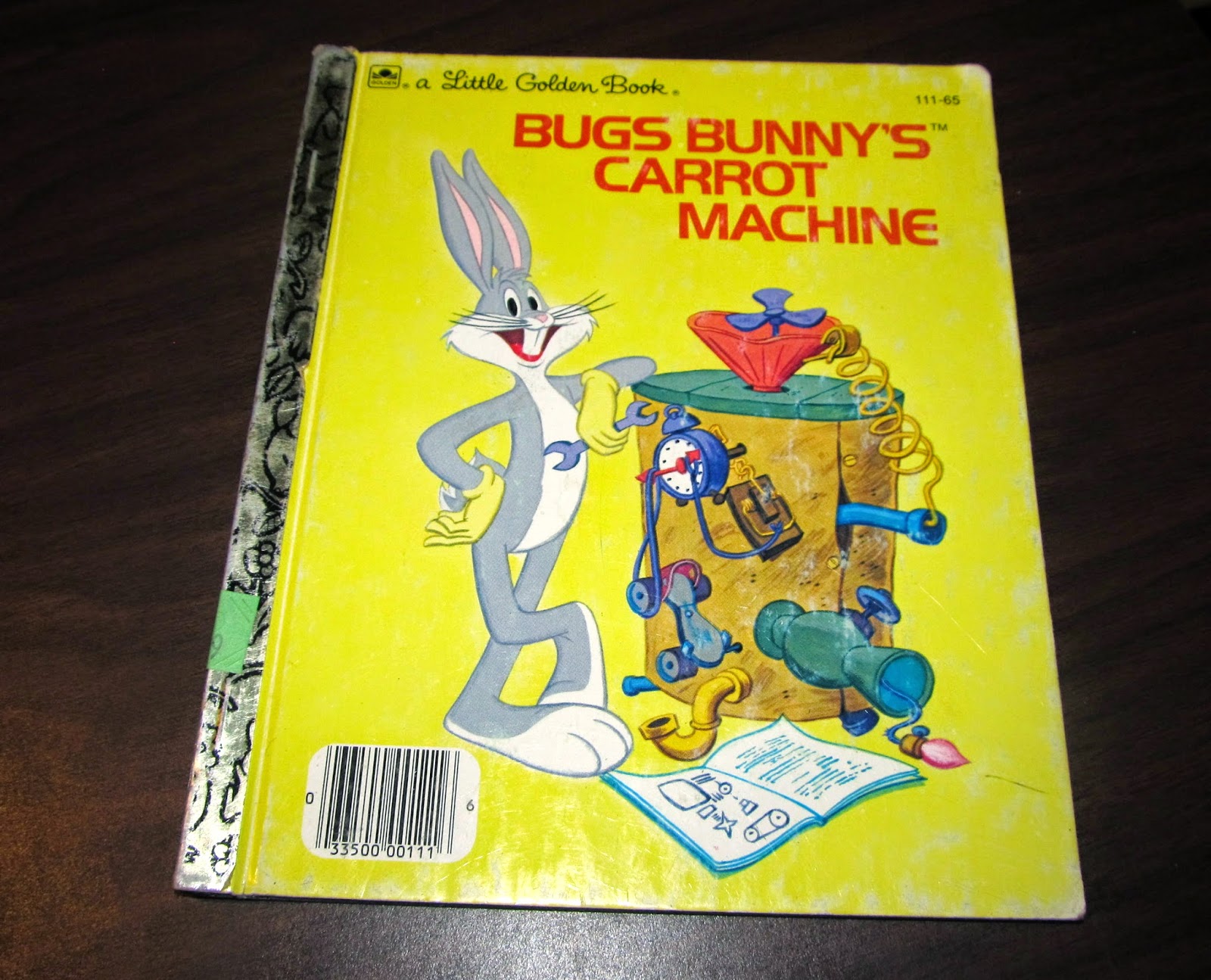 How can you lose when it's a Bugs Bunny Little Golden Book? You can't. That's how. 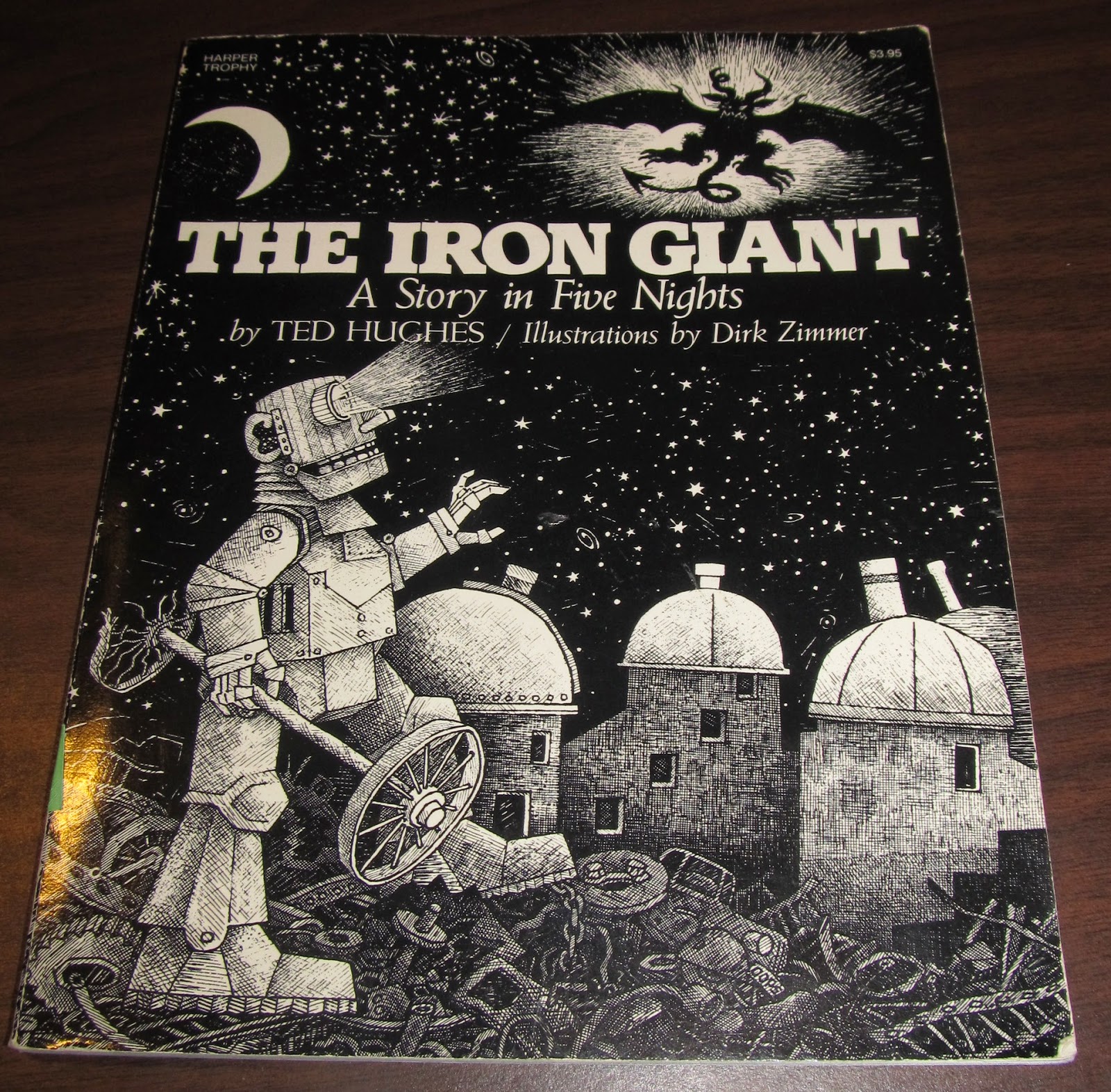 I never knew that the Iron Giant was a book by Ted Hughes and Dirk Zimmer before becoming one of my favorite animated films of all time. 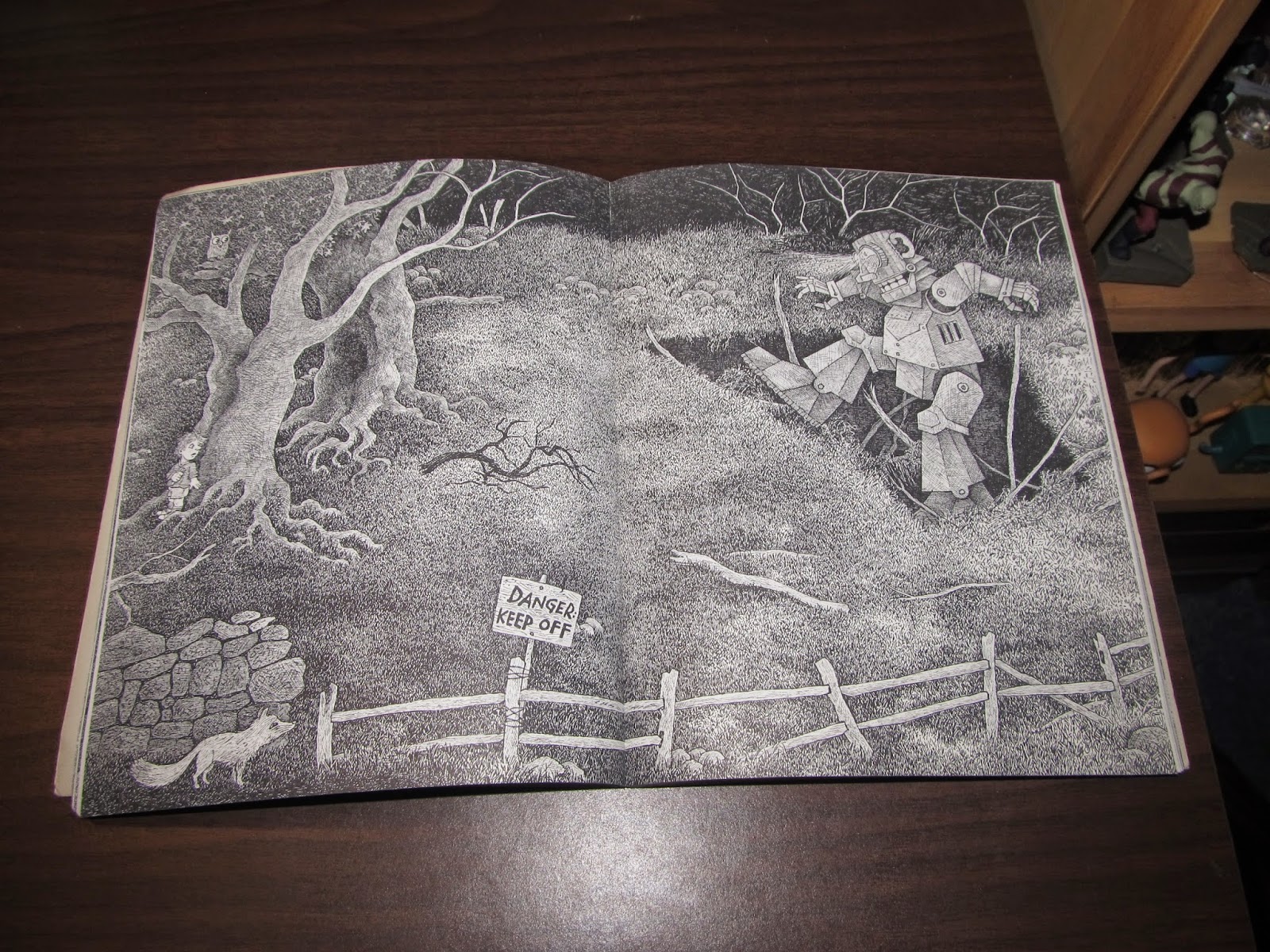 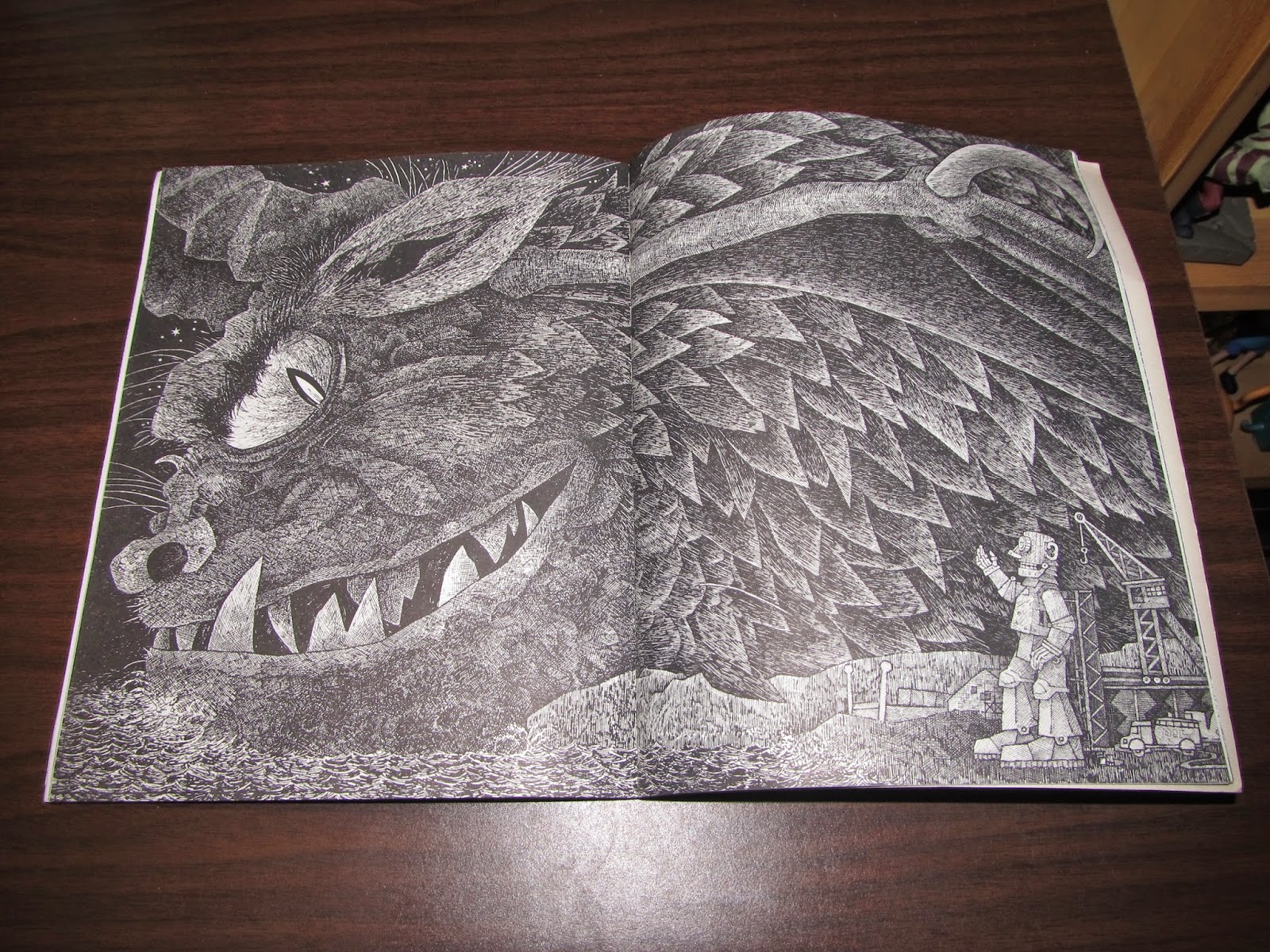 However, the book has a MUCH different skew to it than the movie did. I much prefer the movie, I must say, but this is an interesting story too, In the book there is a monster that is giant even when compared to the Iron Giant. So there's that to deal with. 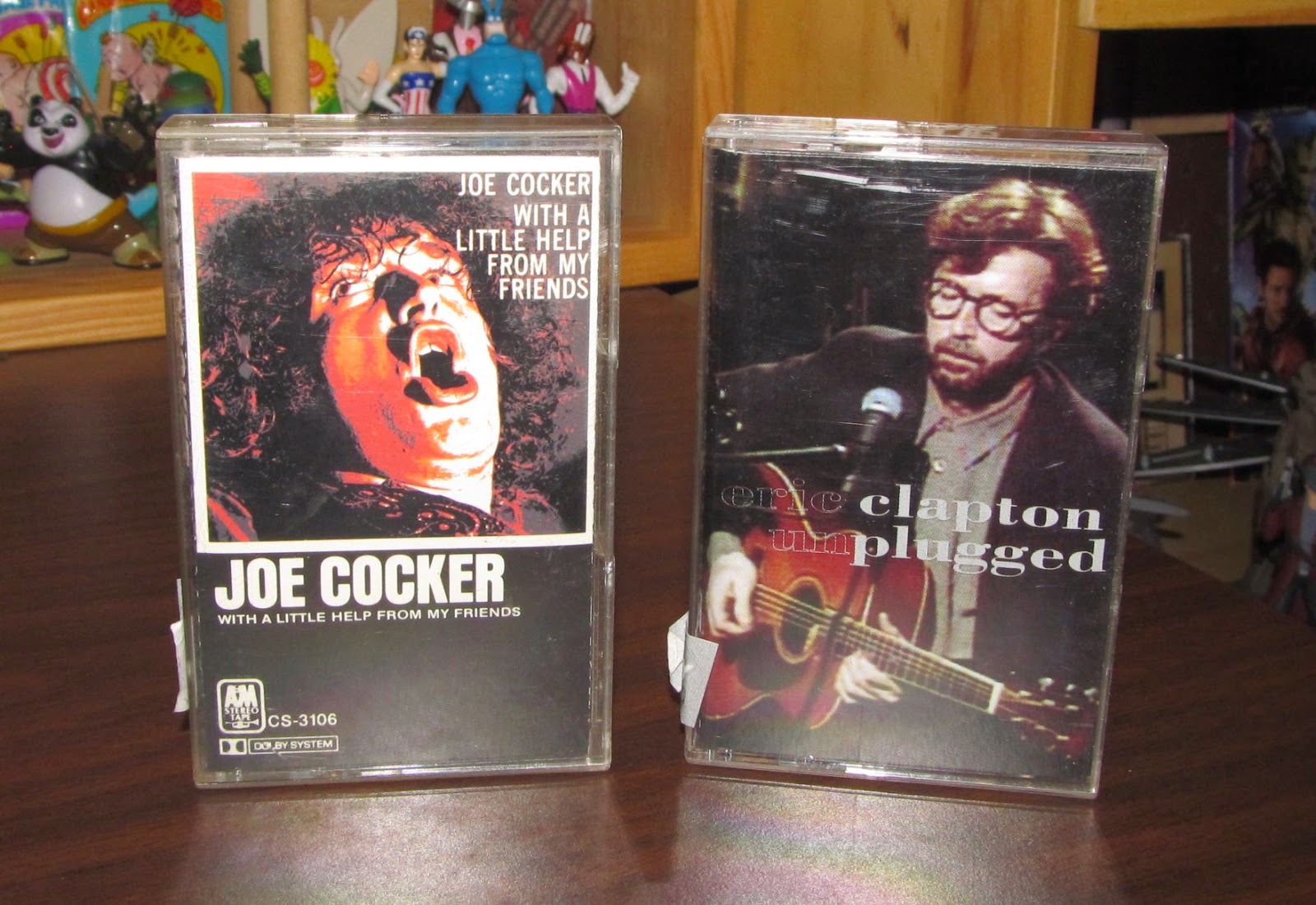 Finally, I found a couple of cassettes. These are some excellent, EXCELLENT cassettes to have found. Joe Cocker is f**king amazing. He just is. If you don't think so then you listen to music wrong. And the Eric Clapton edition of Unplugged is easily on of the best sessions to ever come out of the "Unplugged" concept. So... I was pretty happy to have found these.

Well! That was quite the journey, but we got through it together, and now it is time to rest our weary heads. So... that's all there is for tonight kids! I'll be back soon with more Geeky Goodwill Goodies. So, until that time Happy Hunting!
Posted by Derek Ash at 2:22 PM