I can't even remember the last time I participated in a League of Extraordinary Bloggers post... so I figure it's about time. I picked a nice one too:

Pretty straightforward and simple. Come up with a Top 10 list! So what am I going to go 10-1 on here? I thought I'd talk about:

The top 10 mini-figures in my personal collection at this time. (This means my top 10 could literally change tomorrow, but for today, this is it.) So here we go!

All of these guys came VERY close to making it on the list... but ultimately, they all lost out to the rest of the guys below (Actually, I lied. One of these guys did make his way into the top 10!!! Jeez! He's insufferable! I must have either included him here by mistake, or else he PLOTTED his way into the list somehow without me realizing it!!!) 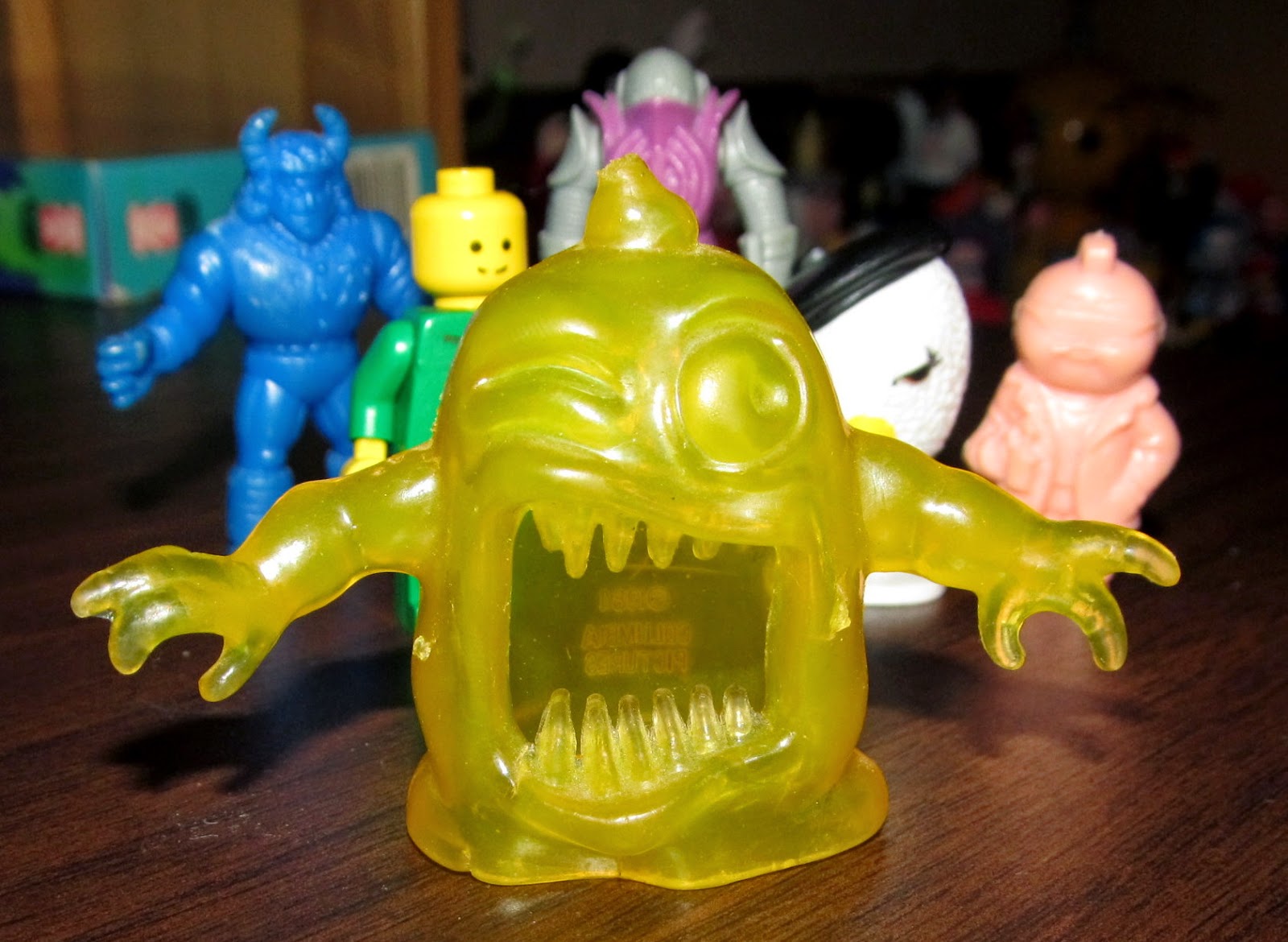 Thought I'd go ahead and get these guys out of the way out of the gate. I could fill more than half of my list with the six mini-figures I owned as a kid that I made an obsessive Super Hero team out of. Instead I thought I would pick my (current) favorite of the six and let him represent the whole group in his way. And that would be Blob. Yes, he is more popularly known as "Gulper Ghost" and he was packed in with the original Egon Spengler action figure from the Real Ghostbusters line. But to me, Blob was the "Thing" to my super-group. He was the monster with a heart of gold. He was a shapechanger, made of slime, and he is probably the absolute only character out of the six pictured above who is absolutely 100% genuinely the original figure I grew up with from the very beginning. All the others were replaced when I was a kid because I broke or lost them, or replaced as an adult with repros or bought online (the only other one I can't be sure of is the blue Teri-Bull, who might be the original... or may be a replacement after I lost mine as a kid). 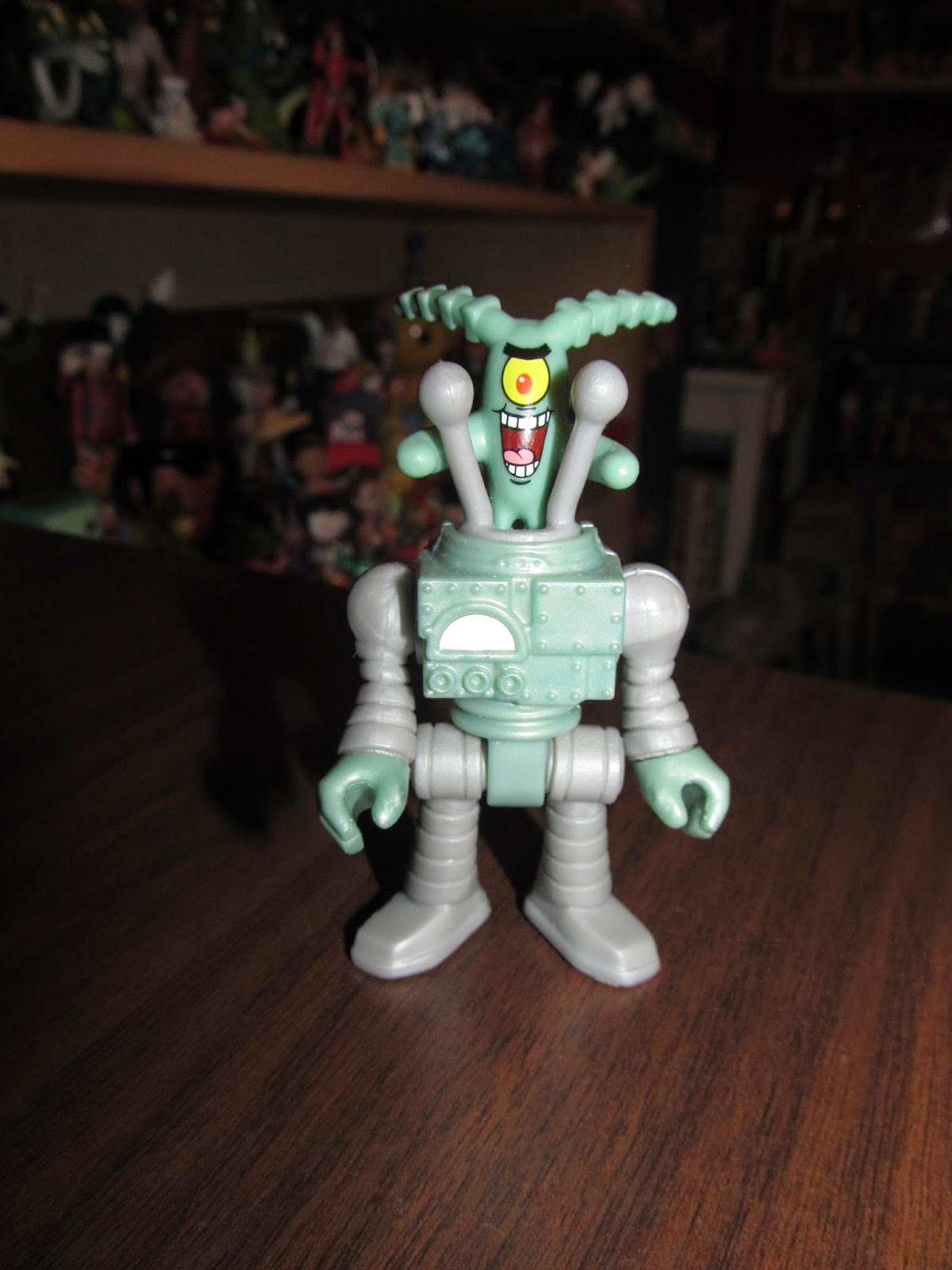 Oh how I love Plankton. He is the absolute most neurotic and self-loathing villain in the history of kids' cartoons. Full of self-loathing and pure envy, Plankton has cooked up more self-destructive plots than any wily coyote or prehistoric squirrel could dream of. And the look and feel of this Imaginext figure is simply brilliant. Putting tiny little plankton up at the top of the imaginext body as if piloting a robot is a perfect design, and I applaud whomever it was at Fisher-Price that came up with the concept, especially considering that Plankton can detach from the main body on a little roller-skate-style cart for a quick getaway. 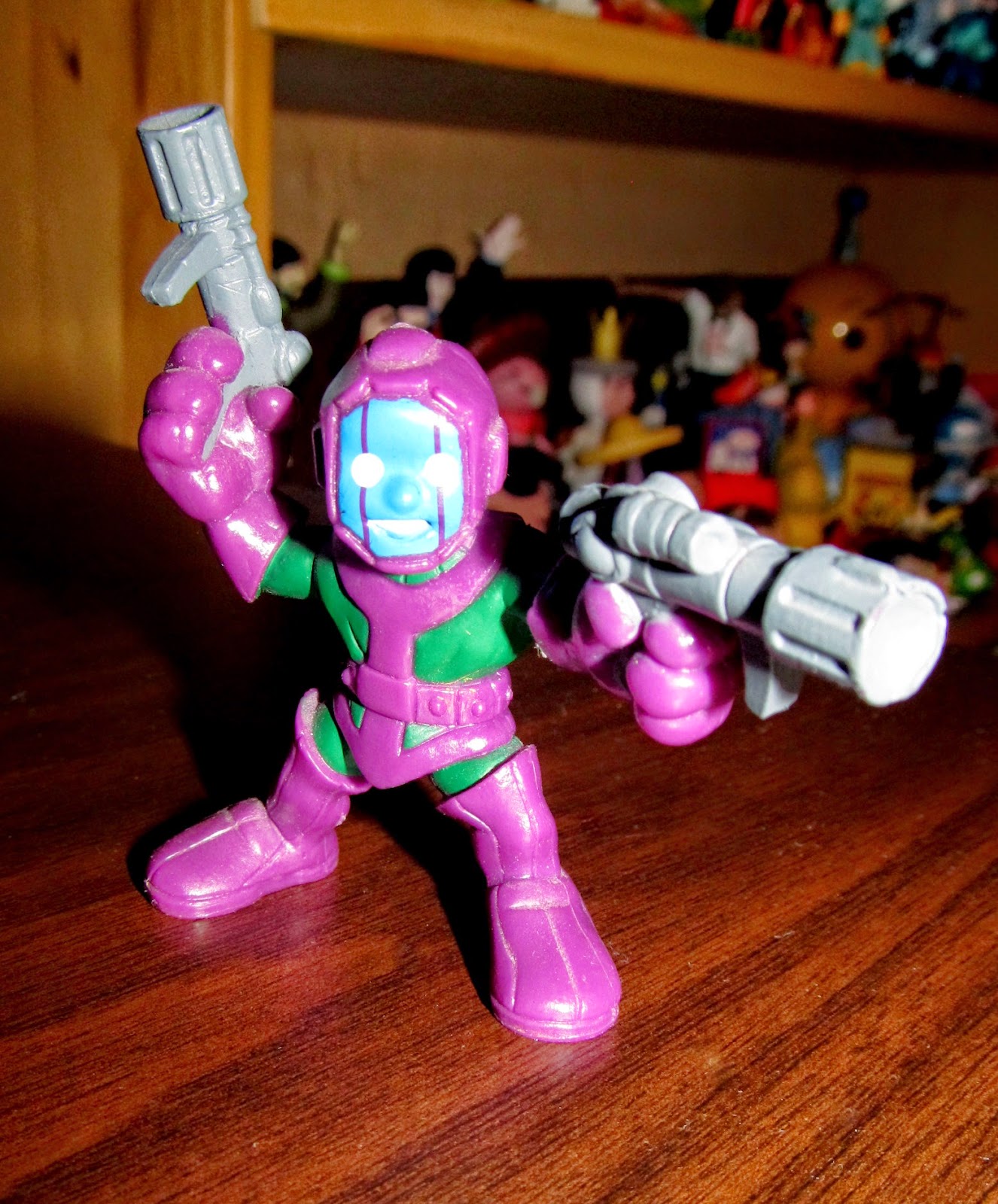 Gosh, Hasbro had so many (now defunct) mini-figure lines that were going strong just a few years ago. Super Hero Squad (Marvel), Galactic Heroes (Star Wars), Combat Heroes (GI Joe), Robot Heroes (Transformers), and Adventure Heroes (Indiana Jones) are all great toylines. And I wanted to include some from ever line... but I decided to choose just one to represent them all. And that figure turned out to be Kang here. He is decidedly NOT a favorite character of mine in the comics. But this mini-figure? The color scheme, the stance of feet and pose of the guns, the grin on his face that tells you just EXACTLY how many f*cks he gives? All perfect. He just looks like he means business. Thanos and Iron Man and Thor and Kitty Pryde all have some pretty great figures dedicated to them as well, but Kang the Conqueror just NAILS it.

7. Pint from a Cheap Bag of Skeleton Pirate Toys I Found This One Time 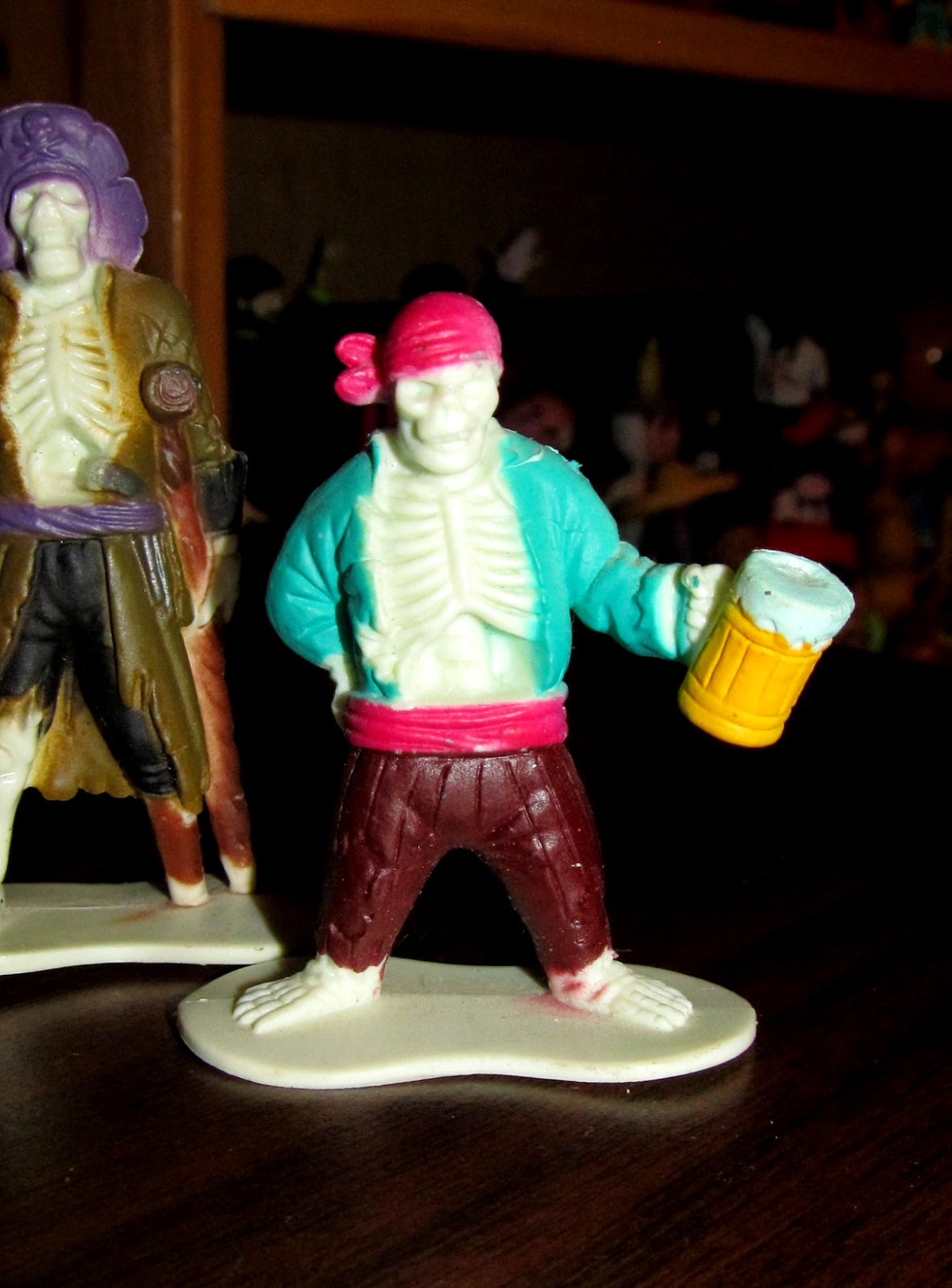 Back in January of 2013 I did a whole post on a set of cheapy-charlie Skeleton Pirate figures that I bought for .99 cents at a salvage/overstock store. I wrote silly backstories for all of the skeletal pirate crew, and I don't think I've ever had so much fun writing a post for this blog. But I did it because I genuinely LOVE this cheap-@$$ set of pirates, and I wanted at least one of them to be on this list. Back in 2013 I gave this little guy the name "Shorty" but he disagreed with me and insisted that his name is actually "Pint" which makes so much more sense in a perfectly ironic sort of way. See, he's pint-sized, and he's holding a pint of grog... so yeah. And I LOVE HIM. How many undead alcoholic kids toys can you name? Yeah. I thought so. 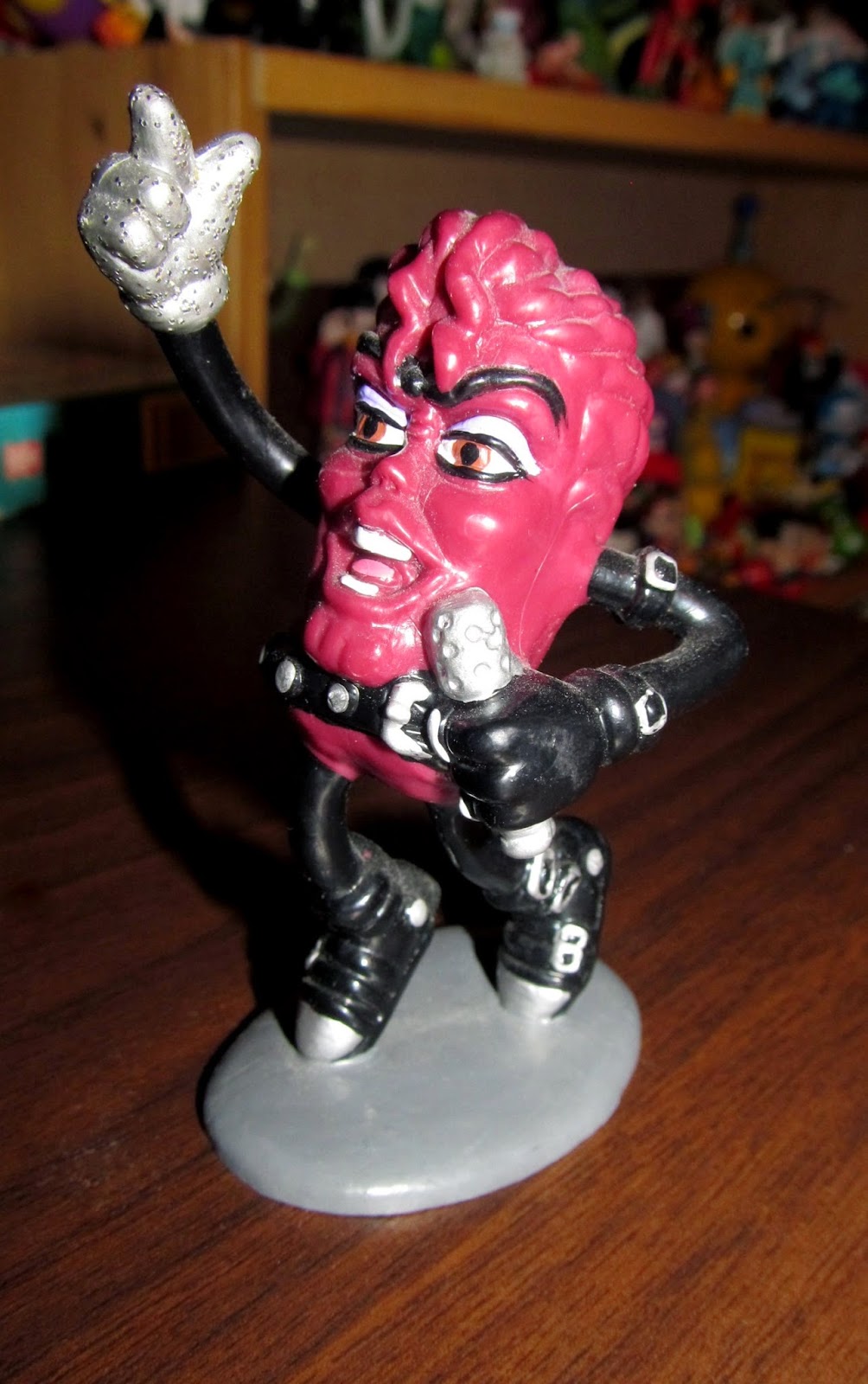 I honestly debated with myself for a very long time over which Raisin to include in this list. I ended up on Michael Jackson here because he is a personal favorite, and arguably the most recognizable and prolific of all the characters represented by Applause in plastic. I had to track this one down on eBay as the final one I really wanted for my collection. I have such great memories of hunting for these figures in specialty shops when I was a kid. Stores more like Hallmark stores and gift shops than your traditional toy stores. I was never into the smaller figures they produces for Hardees, though I had a handful of those as a kid as well. 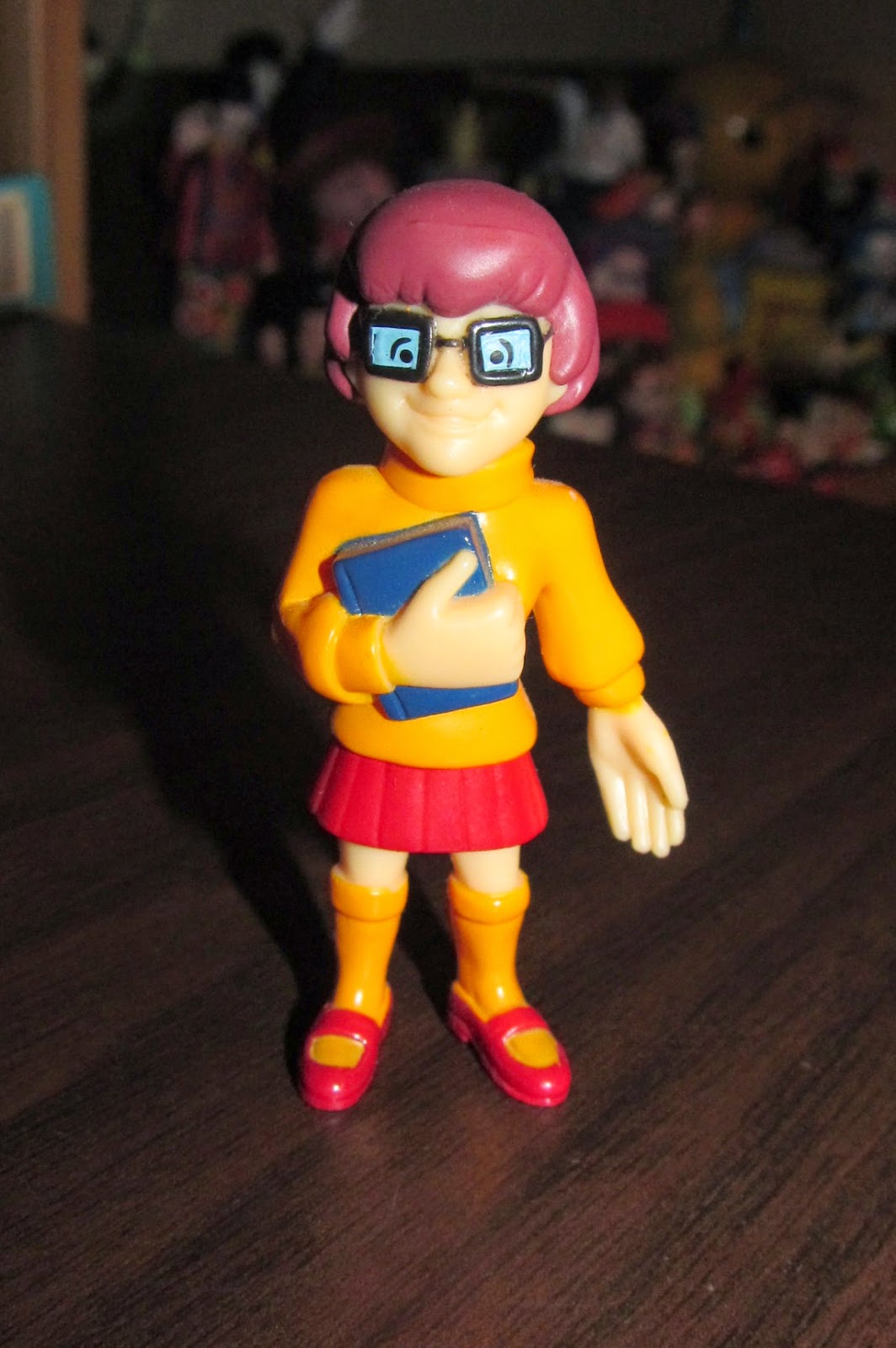 I didn't have to consider for very long whether I would include Velma in this list or not. I would have KILLED as a child to own a mini-figure (or ANY figure, for that matter) of Velma. As the nerdy brains of Mystery Inc., Velma was the plain-jane compared to Daphne Blake's ginger bombshell. And THAT was why I was so deeply, madly in love with her! I actually love that I own the entire Mystery Inc. gang from the Character Toys Mystery Mates line, even if I did have to track Fred and Daphne down on eBay. 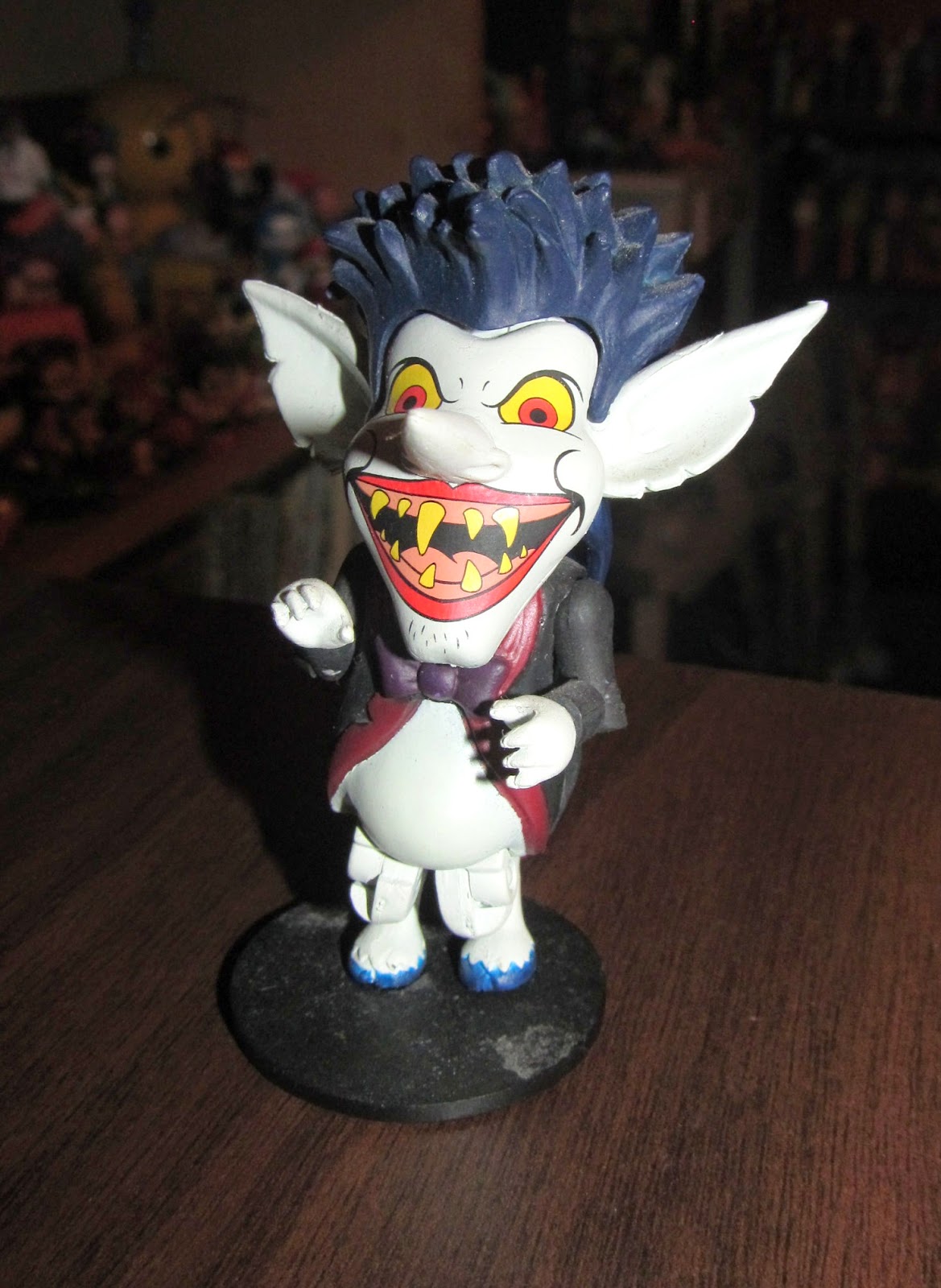 As diverse as I really wanted this list to be, I just had to include another Ghostbusters themed mini figure. Mainly because THIS was the figure that finally got me to buy a Mini-Mates line and LOVE it. Overall, I do NOT like Mini-Mates. But when I saw how spot-on they had reproduced the characters and that THE BOOGIEMAN (their spelling, not mine) was included? I snapped up all four of the main Ghostbusters, and the Janine/Slimer "ready for bustin'" 2-pack. And I have THIS GUY on my shelf. He is one of the creepiest villains from the show and he just kept coming back! Seeing him on the show with his giant teeth, his doorframe-stretching body, his hooves and spiked hair, and his malignant bow-tie just gave me chills. 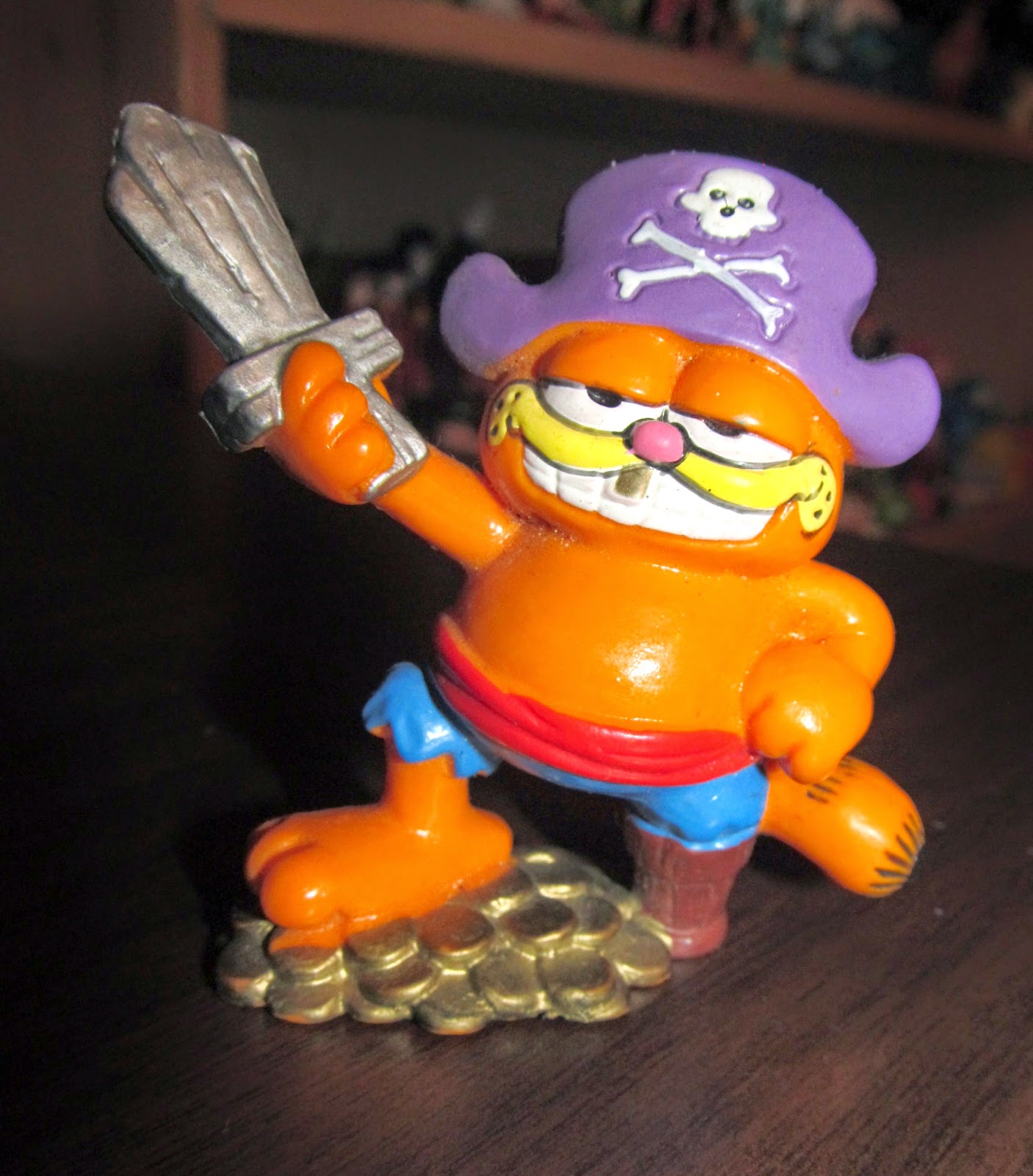 I was randomly trawling through eBay on day when I discovered this toy. It actually came on a keychain (but that was the nature of the 80's, where they would take any random PVC figurine, drill an eye-hook into its brain, and call it a keychain) but I quickly removed that and put him on my shelf. Apparently this figure was produced in the 80's by a German company called Bully. So it was most likely not produced and sold here in the states? I don't know. I had never seen it before, and in all my googling since then I have not found another like it. But for me, Garfield IS my childhood Halloween. I was never a big Charlie Brown fan, to be honest, and the Holiday specials I clamored for were the ones starring this lazy orange lasagna-eating cat. So having him in his Halloween costume, sitting on my shelf is a singular delight. 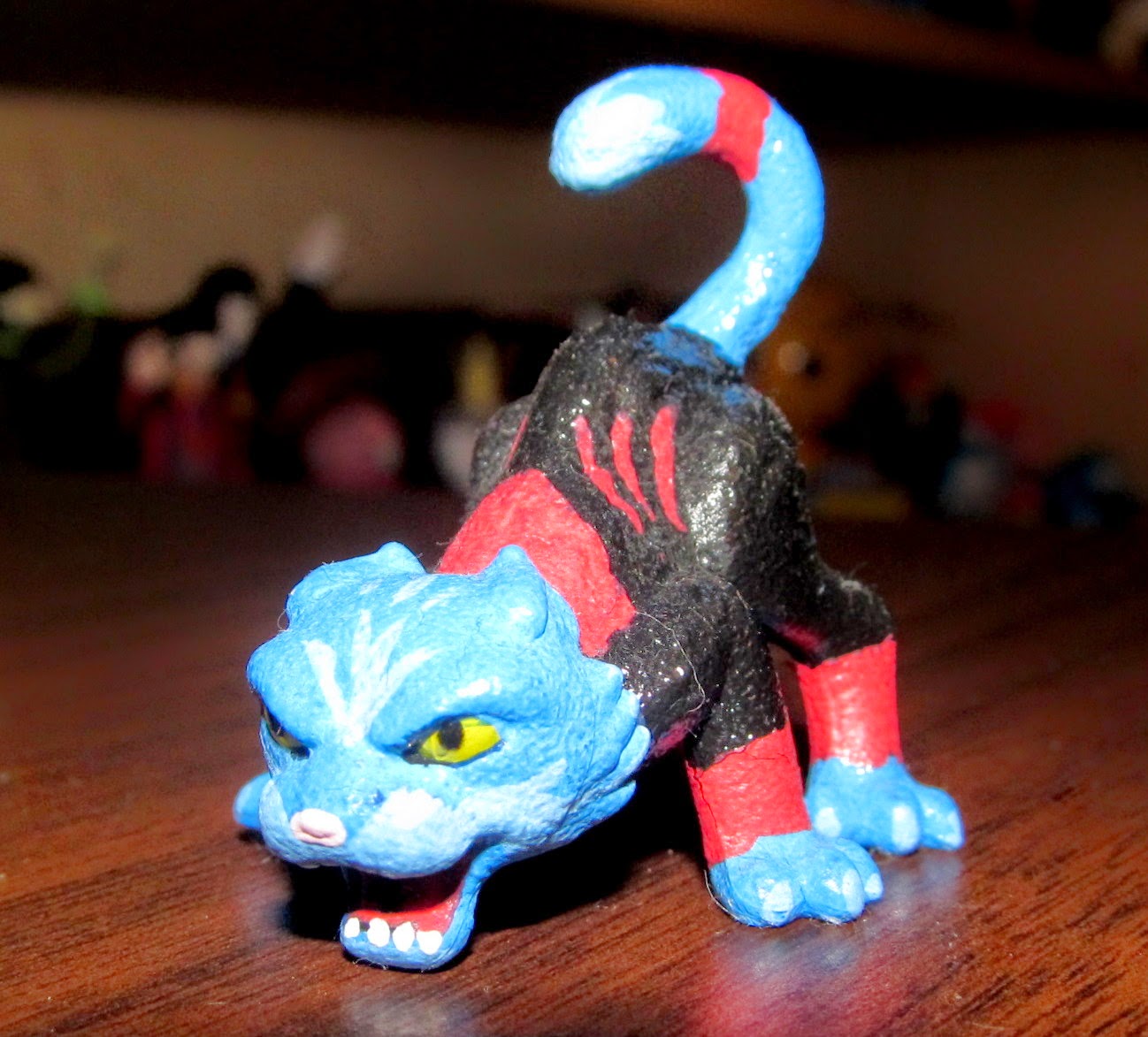 THIS right here ladies and gentlemen, is one of my absolute favorite possessions. I wrote about it when I originally got it, back in January of last year (that was a big January for the blog, I guess). But long-story-short, I am obsessed with the idea of the multi-chromatic Lantern Leagues. The Greens, the Indigoes, the Reds, you name it. I don't read the books regularly, but I love collecting the mini-figures. The various concepts behind the powers and colors and emotions are such a cool idea that I decided early on that I NEEDED a Dex-Starr. And when I found the Imaginext Catwoman figure, and it included an awesome black-cat figurine that looked like it was supposed to be Dex-Starr... I knew I had to get someone to customize it for me. And that someone turned out to be Reis O'Brien, who once ran the (now dormant) Dork Horde blog, and now works MAKING TOYS over at Funko! I traded Reis some of my duplicate California Raisins and he painted a little black cat figurine into Dex-Starr for me! He is honestly THE highlight of all my Lantern mini-figures. 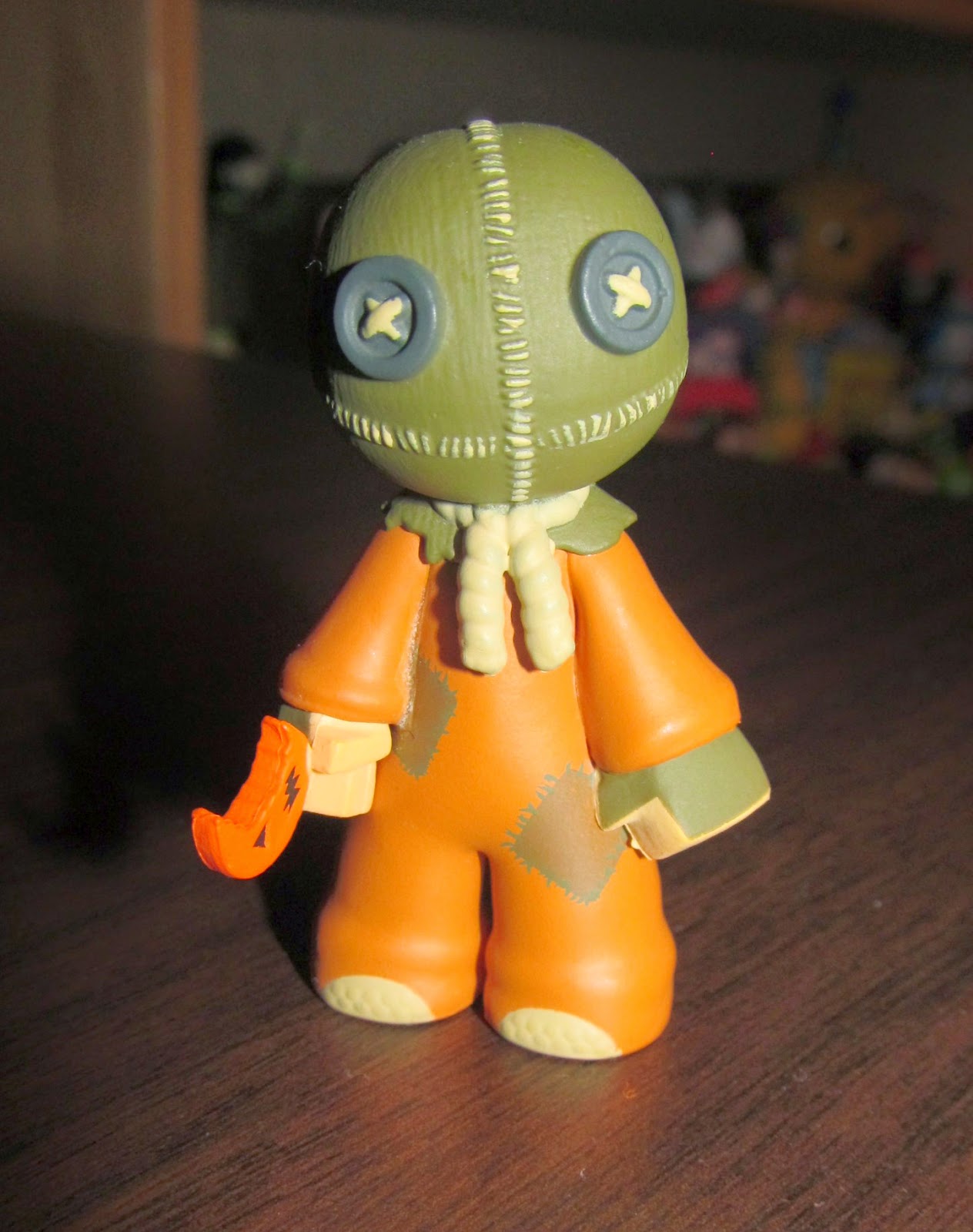 There is no other mini-figure I own that I love as much as this one. He's perfect in every way. He's menacing, he's adorable, he's Halloween in all its glory, he's angular and stylized but not in an annoying way, and he is one of my hands-down-absolute-favorite pop-culture icons. Sam from Trick R' Treat is one of the most perfect visualizations of a Halloween horror villain ever conceived. And even with his big stitched-on smile and button eyes, the menace in that jagged crescent of lollipop is still unmistakable. Sam here just makes me smile. There is not a day goes by that I don't glance at him or pick him up to give him a closer look. The day I found him (at Hot Topic) I actually found 2 of him on my first try. I wasn't disappointed to find the duplicate though, as I quickly turned the second one into a Christmas tree ornament, wearing a little Santa's hat. More than nostalgia, more than the cool custom seen above, more than Saturday morning cartoons... I love Halloween, and Sam IS Halloween in every sense of that phrase. And this toy is AWESOME.

So that's my top ten! Let's see what the other League Members counted down from 10 for:

- Knives Tales gives us a list of her Top 10 Short Stories!

- Go Play Listen gives us a Top 10 of the DVDs on their shelf!

- D.I. Treasures gives us a rundown of Top 10 Cereals!

- Awake Oh Sleeper treats us to a Top 10 Movie Monsters!

- AEIOU and Sometimes Why delivers the Top 10 Songs that would have been great additions to the Guardians of the Galaxy Soundtrack!

That's all I've got for tonight kids! I'll be back soon with some Geeky Goodwill Goodies! Until then, Happy Hunting!
Posted by Derek Ash at 7:33 PM