A Trip to the Big Chicken Barn: Comic Books and Star Wars Figures!

So a couple of months ago the family drove out to Belfast, ME. We do this from time to time. On the way, we always drive past a huge Antique mall on the Bucksport Rd. in Ellsworth called The Big Chicken Barn:

The place is colossal, has two floors, and the entire top floor is filled with books, magazines, and comic books. So I am always dying to look through the contents of the store. Well... I got my chance on this particular trip! And boy did I find a handful of fun stuff! Let's take a look, shall we? 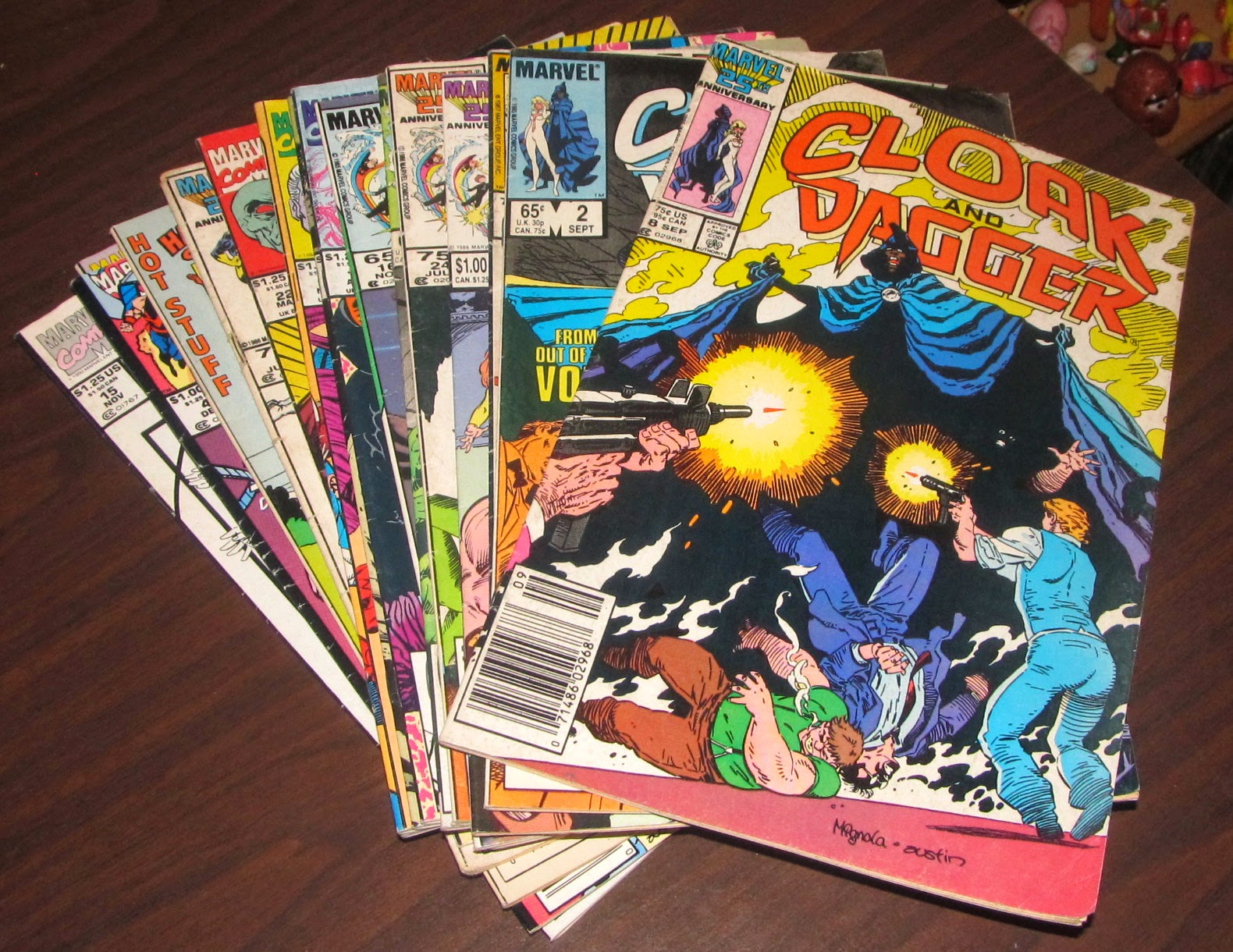 First up, there was a pile of comic books. 18 of them to be exact. 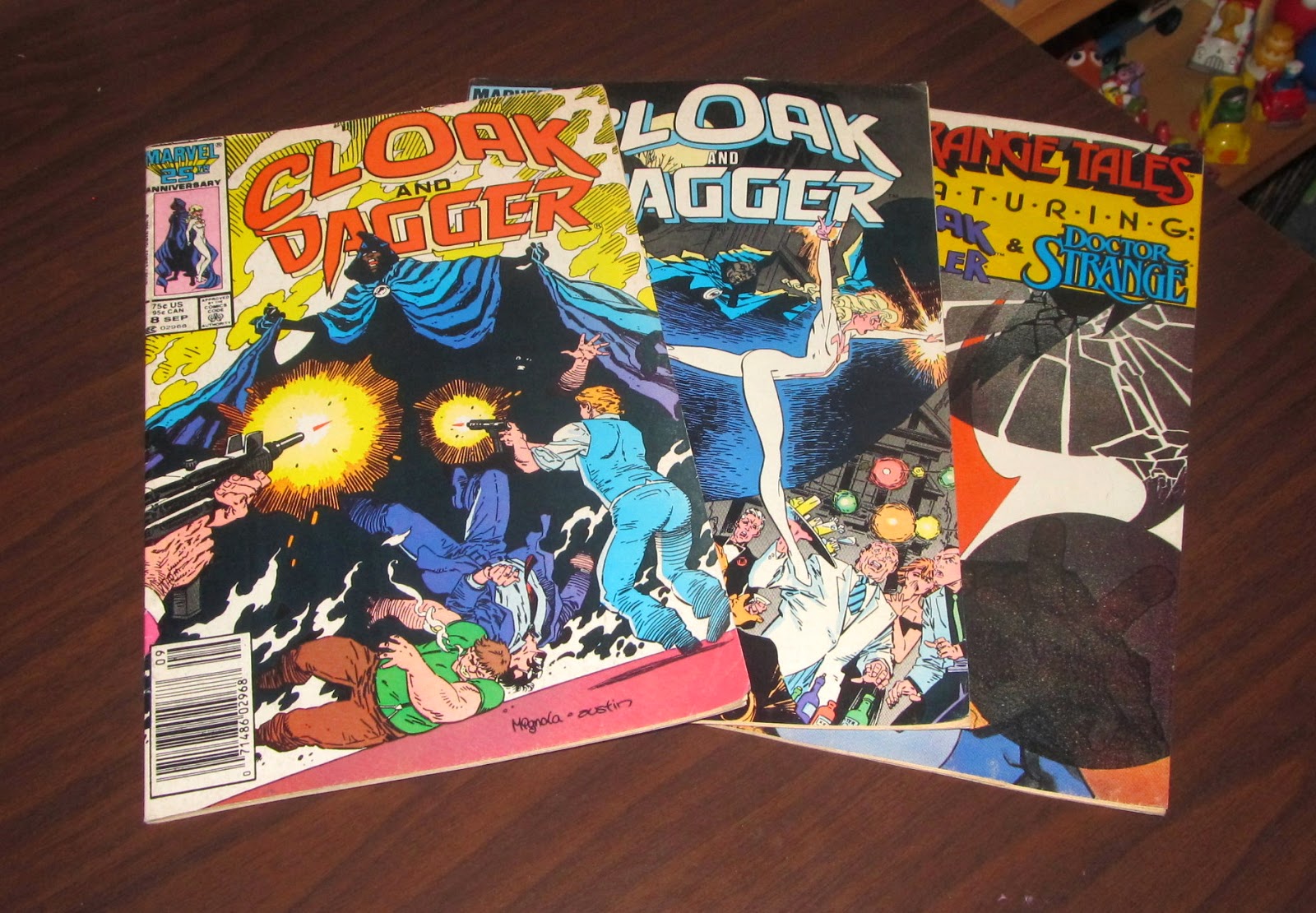 I'm a big Cloak & Dagger fan from way back. I have always loved their concept, their visual as a crime-fighting duo, their duality. I WISH Marvel could make a book with these two as the stars work. Until then, I will settle for digging through old dusty back-issue boxes in places like the Big Chicken Barn. 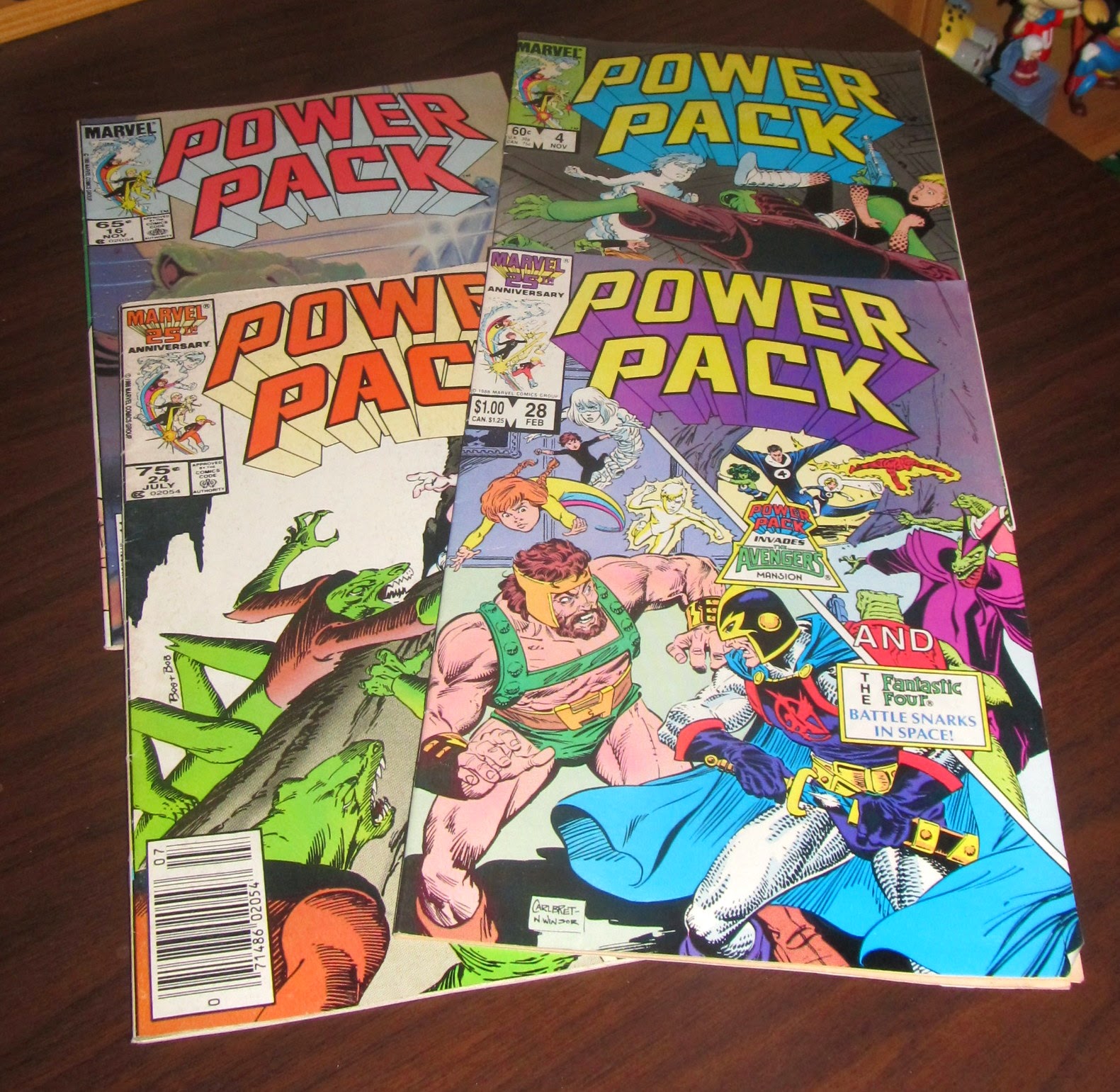 I found a bunch more Power Pack issues to compliment the ones I found at Goodwill last year. I find this title really interesting too. It would never work nowadays. The idea of little children placing themselves in the kind of peril that Power Pack did in this series would just never fly. Some of the stories become near-disturbing simply because children this small are involved. I personally really enjoy it. It's the exact kind of storytelling that brought me into comic books as a kid when I was reading titles like The New Mutants and X-Terminators (two teams that both featured youngsters in the rosters facing some rather adult challenges) during the demonic Inferno storyline. I am making it a point from here on to find the issues of Power Pack that I don't yet own. 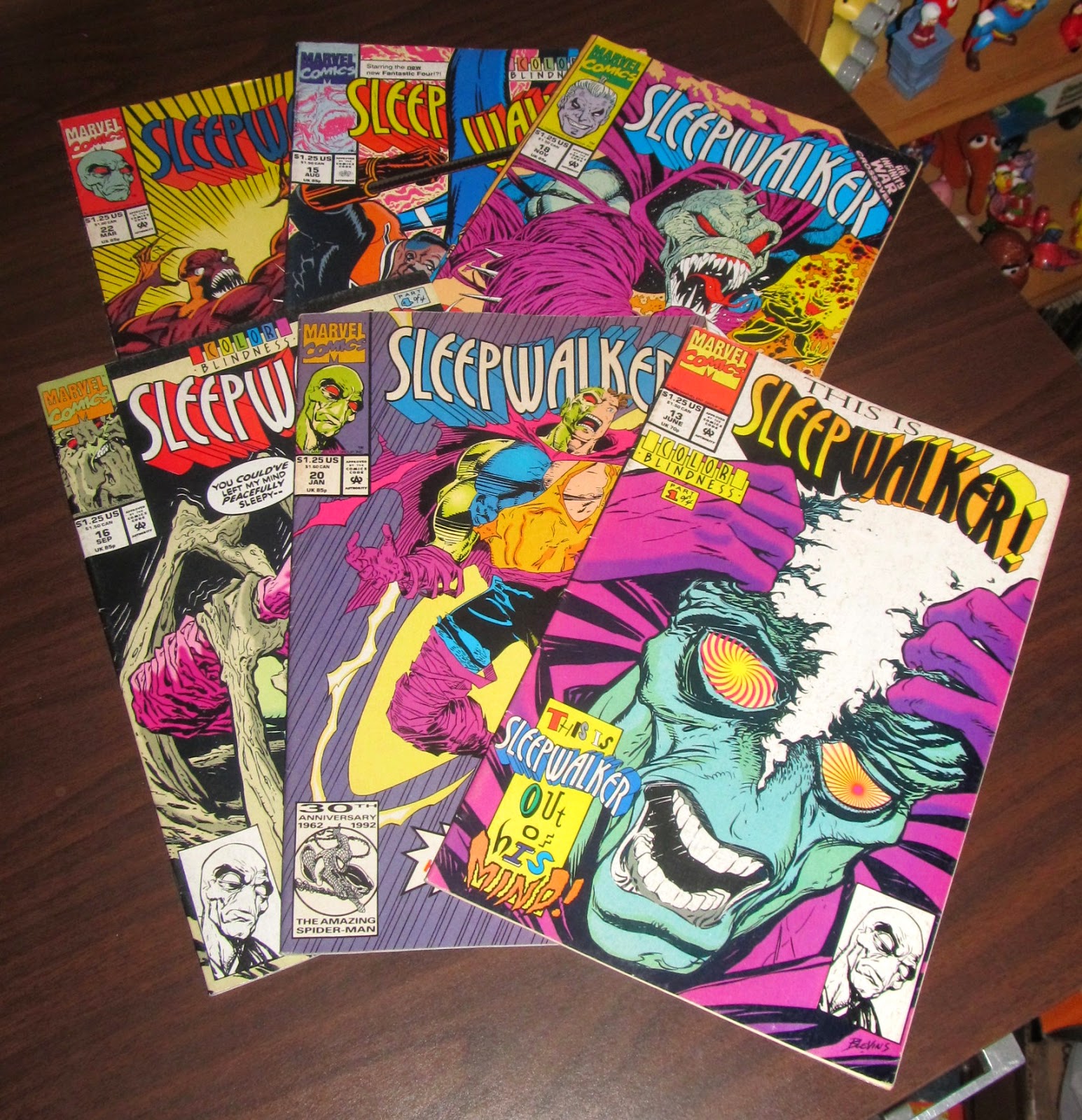 I was SO excited to find a six-pack of Sleepwalker comics! Sleepwalker was just weird enough and original enough that he quickly became must-read for me back in the 90's. I usually didn't have enough money to buy his title regularly, so my Sleepwalker collection is all over the place. But with Sleepwalker's limitations, powers, and bizarre character design he still remains an old favorite. He's the kind of character that would just never have any hope of kicking off his own book these days. 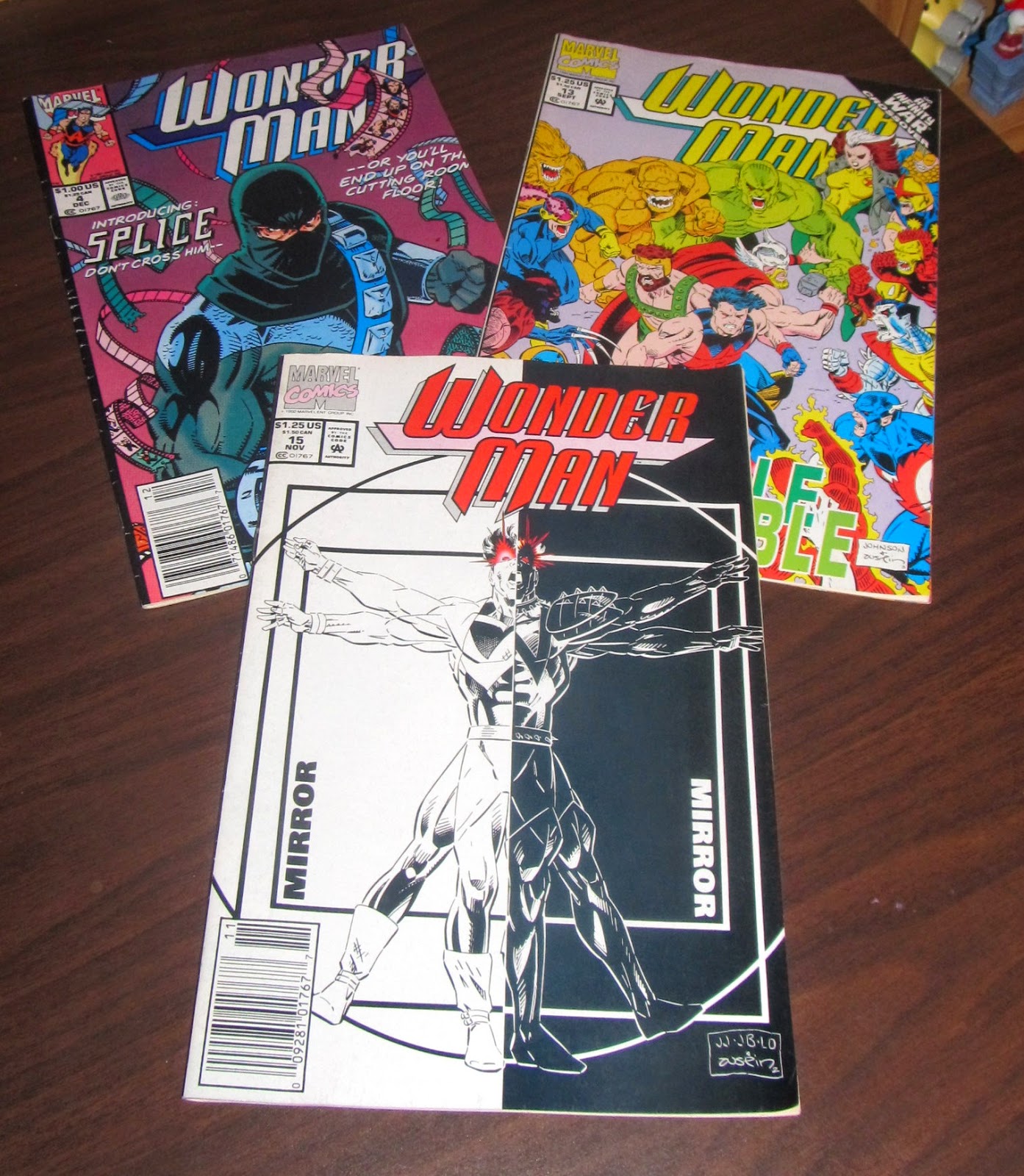 I am SHOCKED by how much I genuinely enjoy the Wonder Man series that Marvel put out in the early 90's. I've had a couple issues of this book kicking around forever, and over time have piecemealed together a small, enjoyable collection. I was able to add three more issues to the stack from this trip. I highly recommend at the very least, the first 10 issues or so. They're a fun send-up of Hollywood culture, in a sort of "L.A. Story" with superheroes kind of concept. 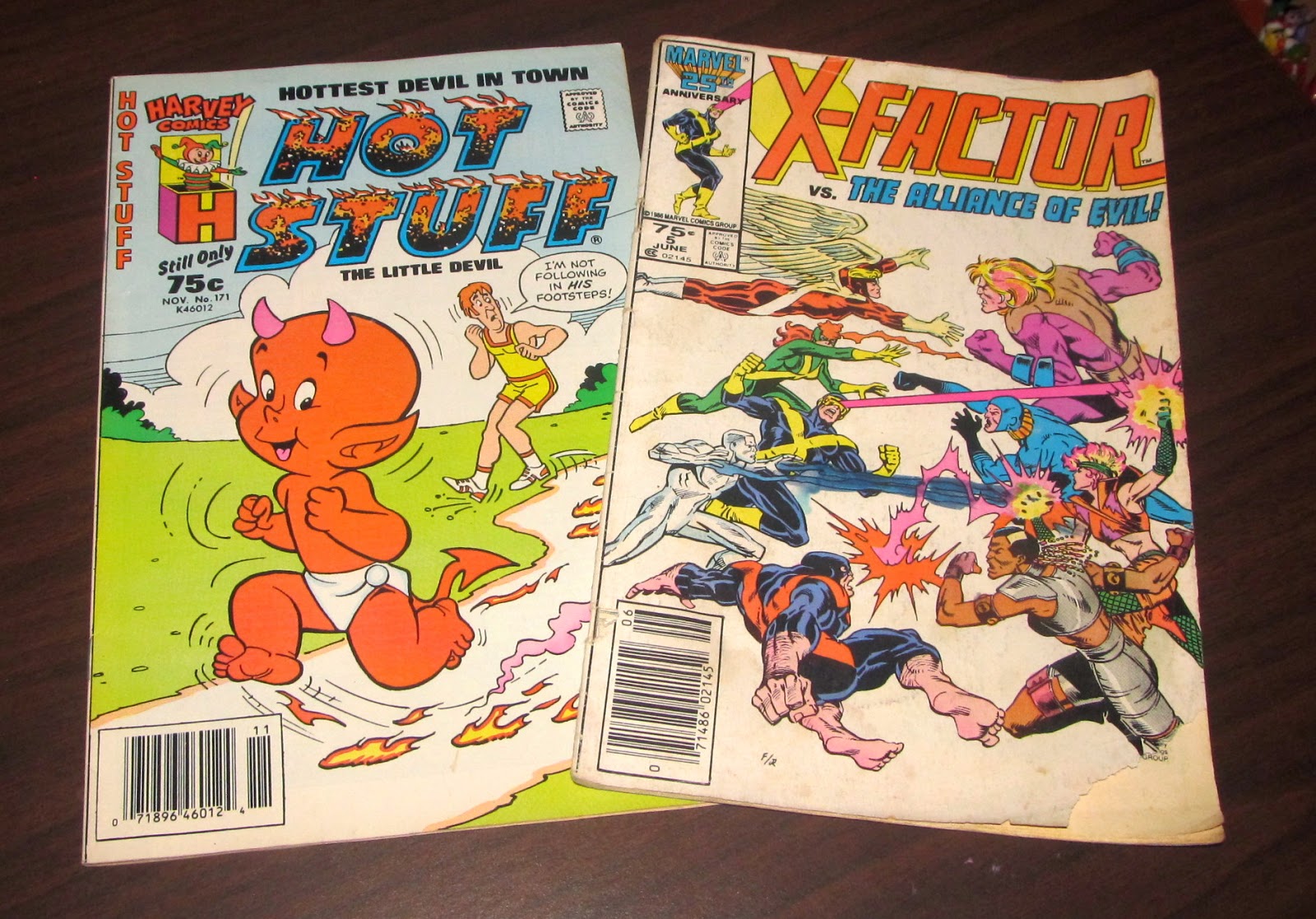 Finally, I found these last two gems. The first one is an issue of Hot Stuff from Harvey Comics. These were staples of my childhood before I began reading New Mutants and X-Men. I mean I was a HUGE Harvey comics reader. And then there on the right are some of the very mutants that pulled me away from Hot Stuff, Casper, Richie Rich, and the other Harvey all-stars... the mutant team X-Factor! 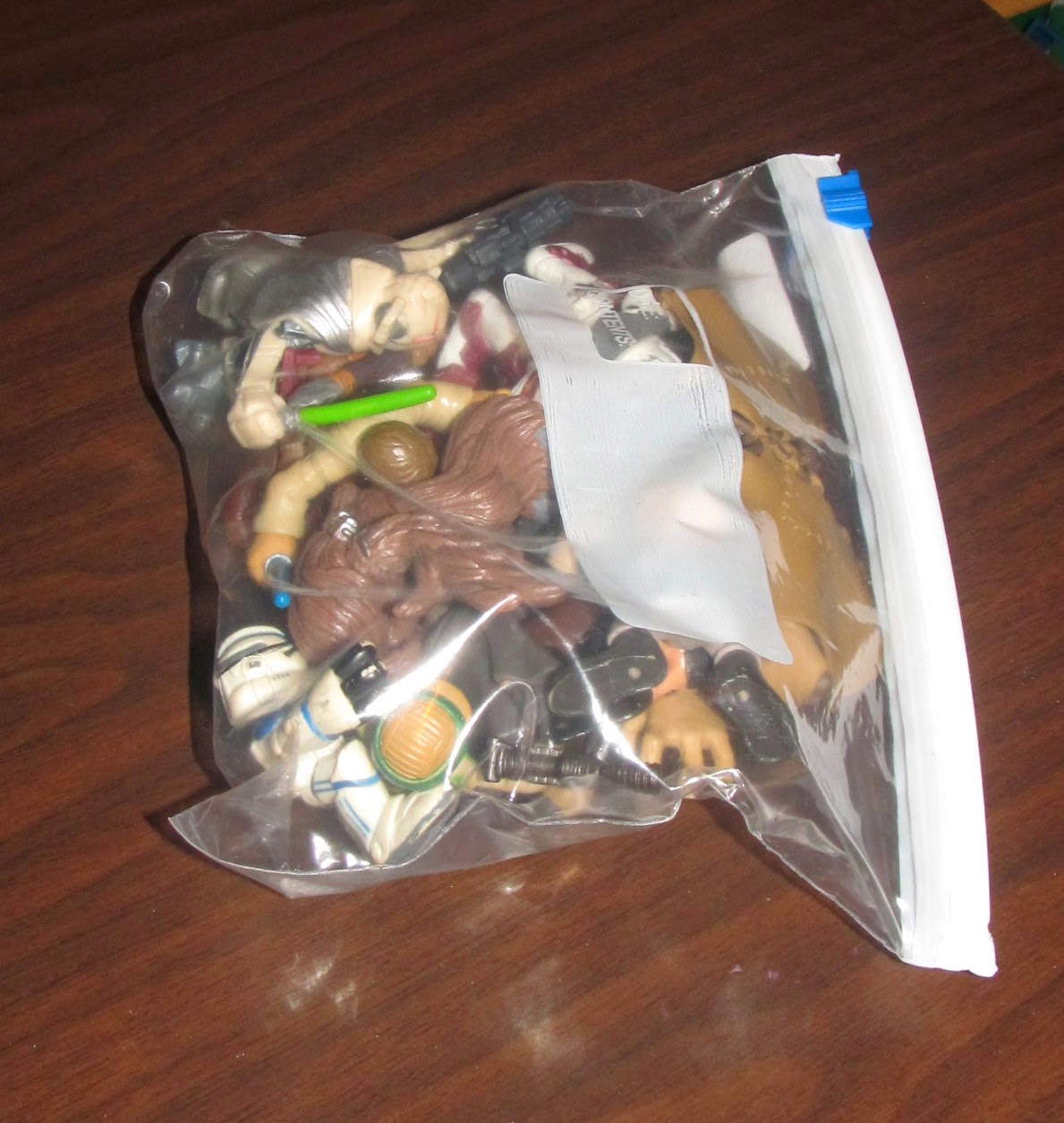 But the Chicken Barn isn't all books! The downstairs is full of antiques and collectibles. It was down there that I found this little bag of AWESOME... a ziploc bag full of Hasbro's Star Wars Galactic Heroes figures, which are no longer being made.

Here's a look at everyone included, 14 in all. As you can see, it was a nice mix of characters, if you ignore everyone from the prequels. Some of these I already had, but a lot of them are ones I was trying to track down! Let's take a look at some of the more notable characters:

First up are some folks from the forest moon, Endor. A pair of Ewoks, including Wicket, with the spear and I'm-not-sure-who with the wings. And Leia! Speeder-bike Leia, who goes along great with my Speeder-Bike Luke! 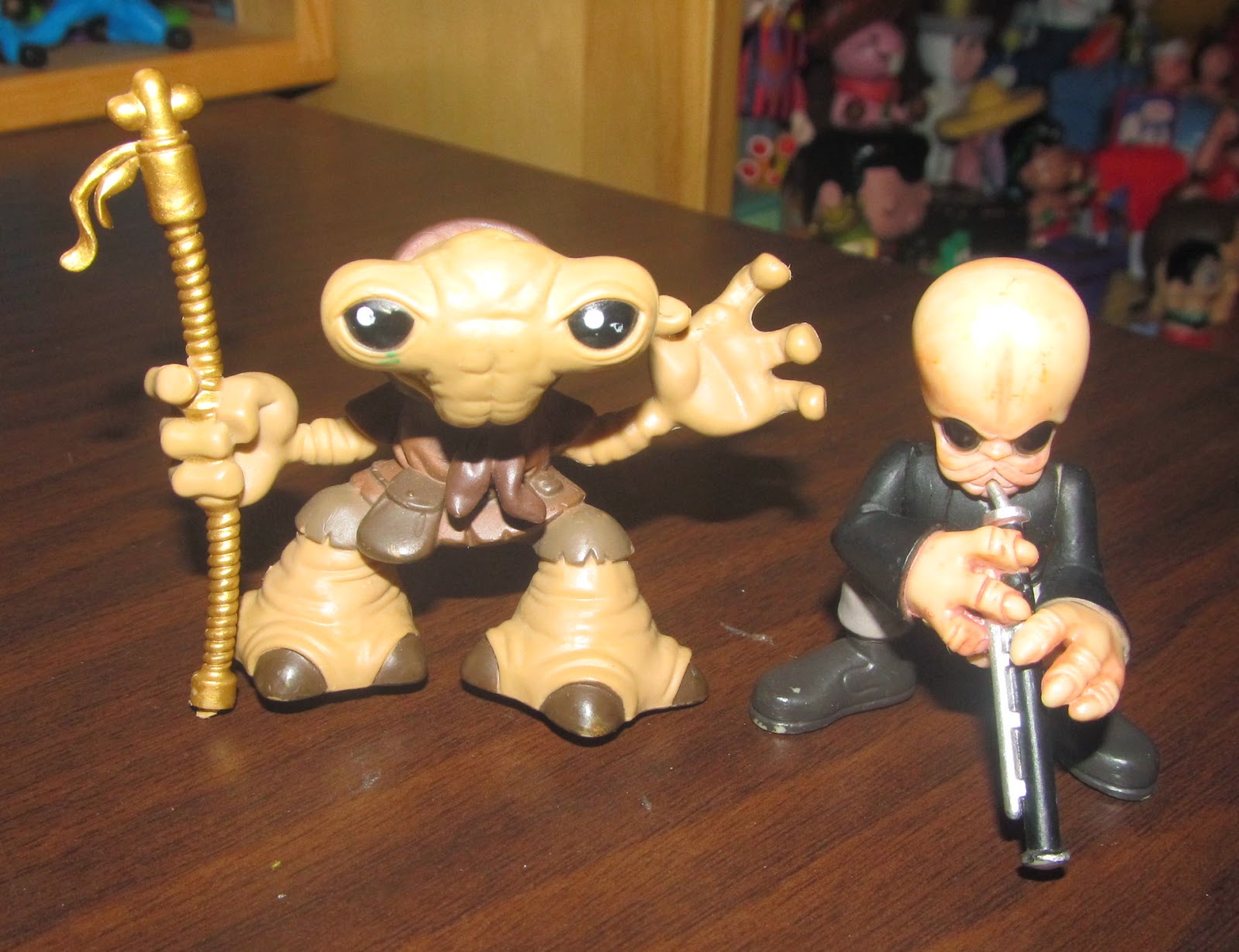 And these guys from that hive of scum and villainy, the Mos Eisley Cantina! You have Hammerhead there and then one of the Cantina band. 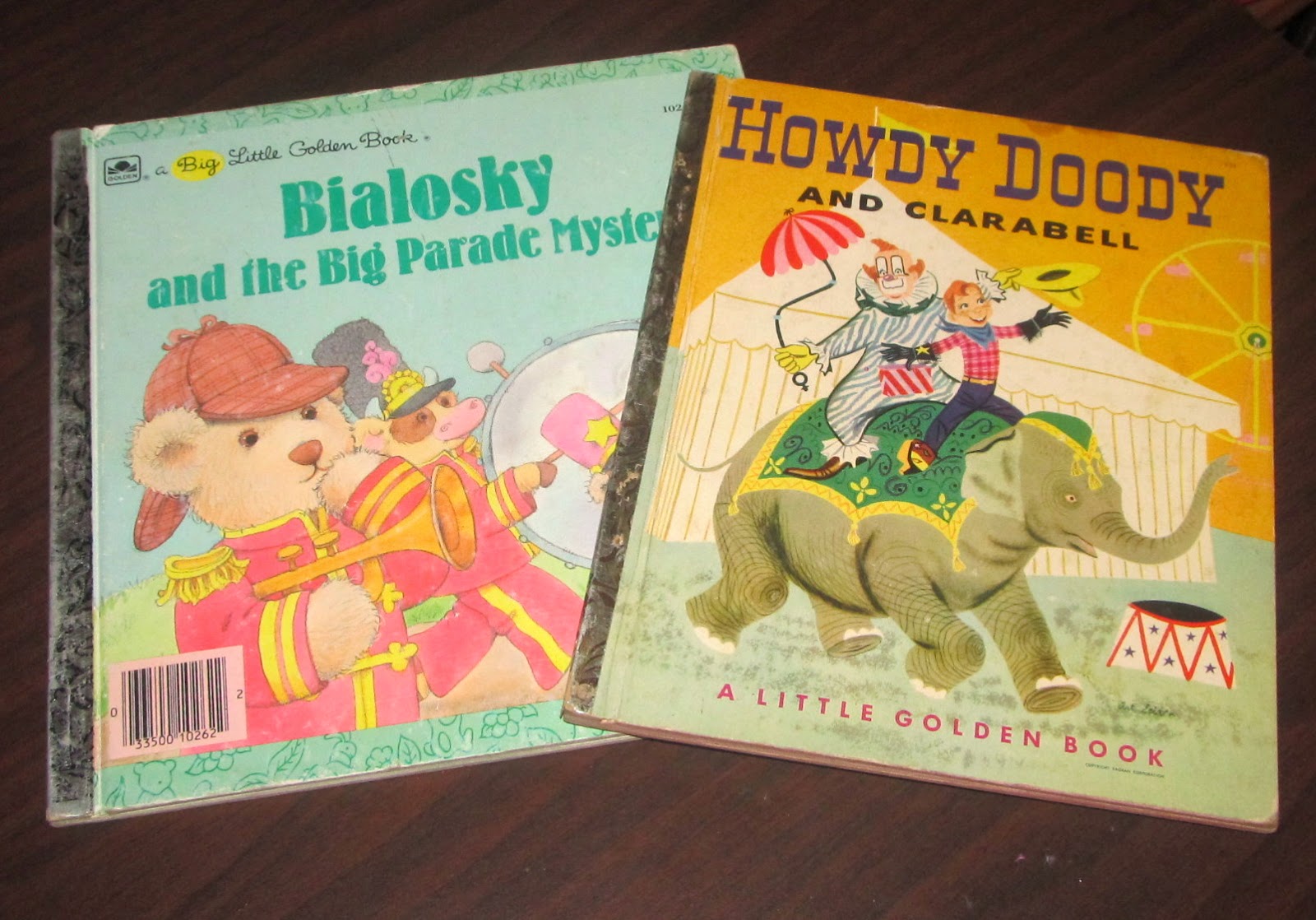 Next up a couple of Golden Books. The first is significant to no one but me, but because I love reading Bialosky's Christmas to my kids every year, any time I find another kids book, much less a Little Golden Book, I get excited. And then this vintage Howdy Doody Little Golden book was such a neat find! Love stuff like this. 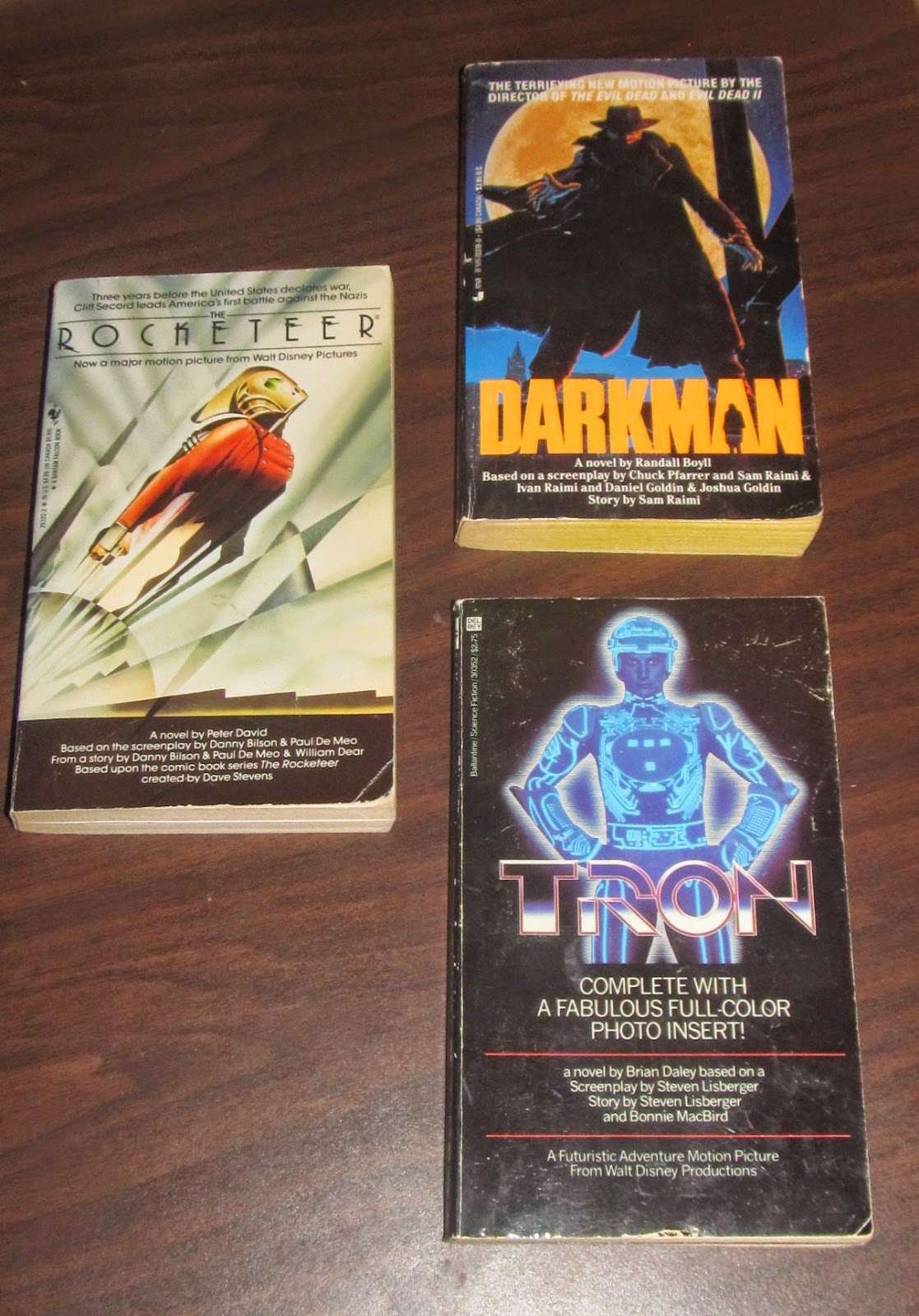 And I'll finish things off with a trio of novelizations. The Rocketeer, Darkman, and TRON! I love collecting movie novelizations lately, and these three books couldn't have made me more pleased! Just look at those covers, I mean come on! All in all, I had a pretty good time poking around in the Big Chicken Barn!

That's all I've got for tonight kids, but I'll be back with more Geeky Goodwill goodies soon enough! So, until then, Happy Hunting!
Posted by Derek Ash at 9:17 PM