SO it's that time once again kids (In fact, I am almost too LATE!!!) for The League of Extraordinary Bloggers!!! What's the topic this week you ask? Easy! It's:

Awesome right? So I sat and thought for a bit. I own a bunch of books that detail various different local creatures that folks claim are real, like The Jersey Devil, Chupacabra, The Moth Man, etc. But I didn't really just feel like focusing on my "favorite" cryptid... so I decided I'd focus on one of my all-time favorite book series that revolves around cryptids: Rick Yancey's Monstrumologist series. 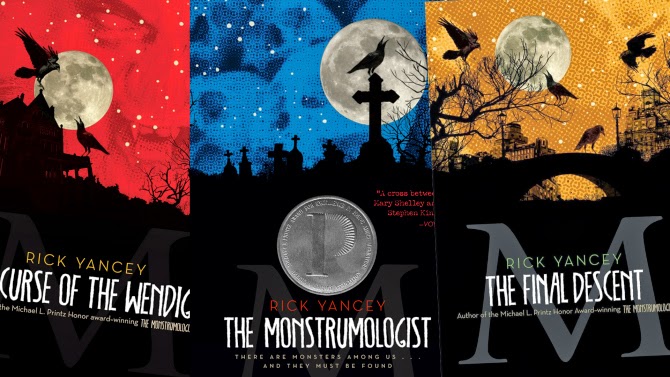 I know I've mentioned it in passing here or there on the blog before, but I don't think I've ever devoted an entire post to Yancey or his books. And now that there's news that the series has been optioned by Warner Brothers to become a movie or possibly series of movies, well I figure I better get on it.

The first book in the series The Monstrumologist, focuses on the relationship between Dr. Pellinore Warthrop and his young ward Will Henry. The relationship is a dysfunctional one, and mostly features the good Dr. Warthrop hunting monsters and putting Will, who is about 12 when the series begins, in mortal danger at every turn. The first book features creatures known as anthropophagi, which are straight up monsters, through and through, characterized by their lack of a head, and face in the center of their chests. I should point out that the gore level in these books is HIGH. The characters are developed and feel real, and the emotional impact of the monster attacks (as well as some of the circumstances revealed as to how the monsters got on, or rather under, US soil) are tragic and horrifying in equal measure.

The second book The Curse of the Wendigo, focuses on... well the Wendigo. We're not talking about some lumbering bigfoot monster, but an evil, infected human who hungers for human flesh. There is even more of an emotional punch to this story as questions of love, morality, responsibility, and humanity itself are explored in the shadow of the Wendigo. The "monster" is definitely played more as a dark side of human nature rather than a beast to be hunted and defeated.

The third book in the series sets Dr. Warthrop and his charge on a quest to find a beast that creates nests from human flesh. The nests cause an infection in anyone who handles them that drives them to behave much like aggressive zombies. So this is sort of Yancey's zombie book in the series. The twist at the end isn't EXACTLY a twist... but as with the other two books in the series, the book is more about the humans in the story even more than the monsters. This book explores the nature of compulsion, and asks the question of what truly makes a monster a monster?

The last book in the series is The Final Descent and I haven't finished reading it yet. So... I don't have much to say about it. Er... more on that later.

And to keep this slightly true to m Goodwill hunting theme... some other related books that I'll be reading at some point after I've finished Yancey's series are The Cryptid Hunters series by Roland Smith:

There are currently 4 books in the series, and I've found the first two at Goodwill.

The series follows a set of Twins who travel with their Uncle, hunting cryptids. I guess the Chupacabra makes an appearance in the 3rd volume. So I'll be sure to track that one down as well.

Let's see what the rest of the League is tracking down in the wilds, getting blurry photos of:

- Adam Nori who happens to be a paranormal enthusiast, definitely had some thoughts to share on the topic.

- G.I. Jigsaw shares a selection of cryptid toys you can hunt down for yourself.

- The Nerd Nook reminisces about an 80's family-favorite cryptid...

- Revenge of the Toybox goes looking in some Dungeons and around some Dragons for a fantasy cryptid.

- Our fearless leader Brian over at Cool & Collected takes us on a magical mystery tour of his favorite pop-culture bigfoots (feet?)

- Primordial Badger's Media Hoard understands that sometimes if you can't find the cryptids... you have to make them yourself.

- That Yellow Duck gives us a pretty awesome Who's Who of Cryptozoology. Some of these I wasn't aware of yet, and now I have some internet trawling to do!

- Super Powered Fiction gives us a little taste of cryptids we may see in print in the near future...

And that's all I've got for tonight kids! I'll be back soon with some Geeky Goodwill Goodies! So until then, Happy Hunting!
Posted by Derek Ash at 4:47 PM