Goodwill Grab-Bags (and one Mecha)

I was actually tempted to draw this post out into a couple of posts, seeing the volume of stuff herein. But then I got thinking: I have items I found in two different grab-bags on the same day that sort of go together, and it would bug me if I didn't connect them together in a post. So you get a big toy post today including THREE count-them THREE grab-bags, and one loose toy. Congratulations! 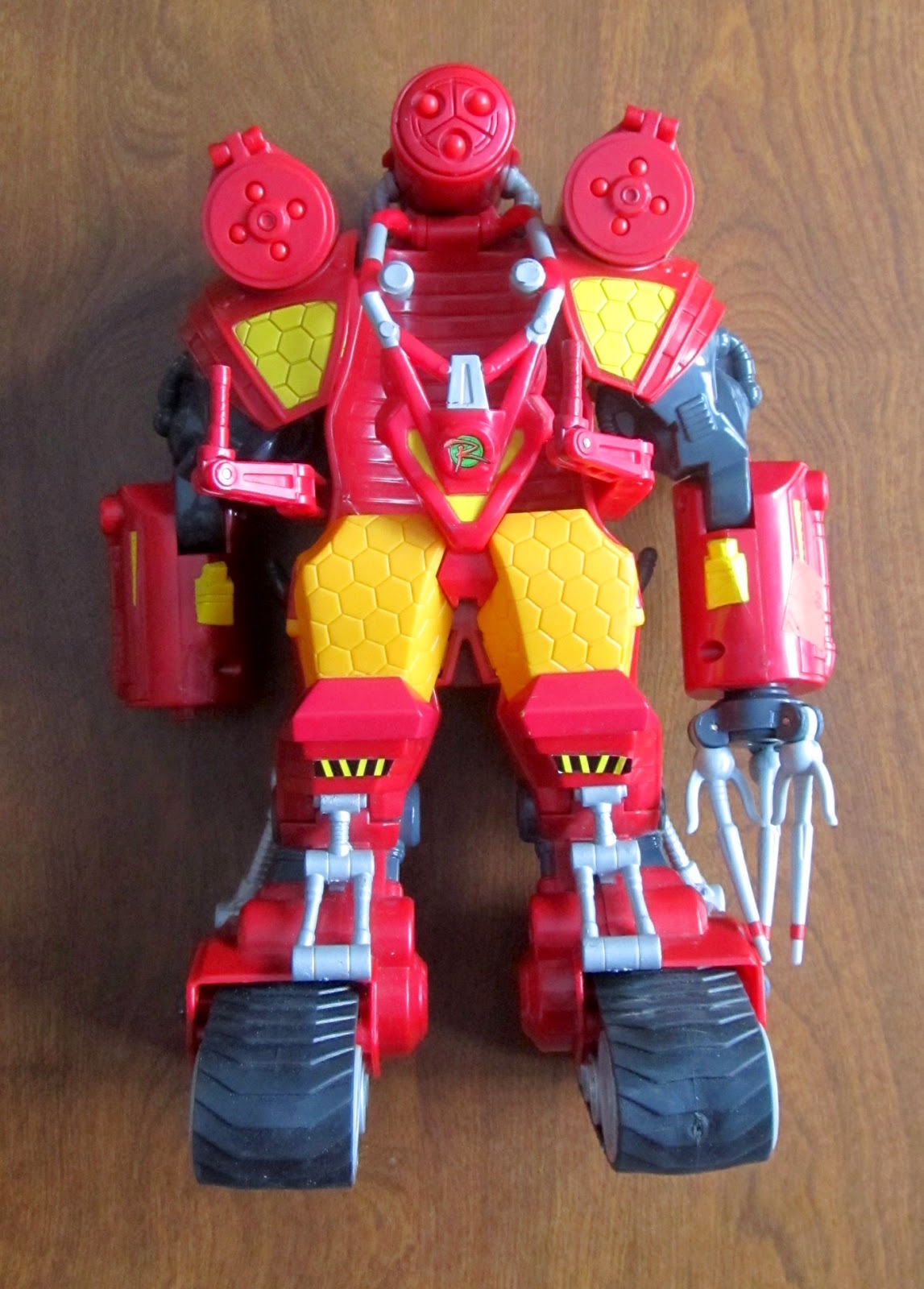 Before I dig into the grab-bags I want to feature this Teenage Mutant Ninja Turtles mecha that I found for 1.99. It's missing a few pieces, but is complete enough for this guy right here. This is from 2005, and is from the Turtles' second animated series toy-line. I'm not a HUGE collector of this line, but I have a few pieces here and there, and there was just absolutely no way I was walking away WITHOUT a giant TMNT-themed battlesuit. So here we are. This is where my life choices have led me. 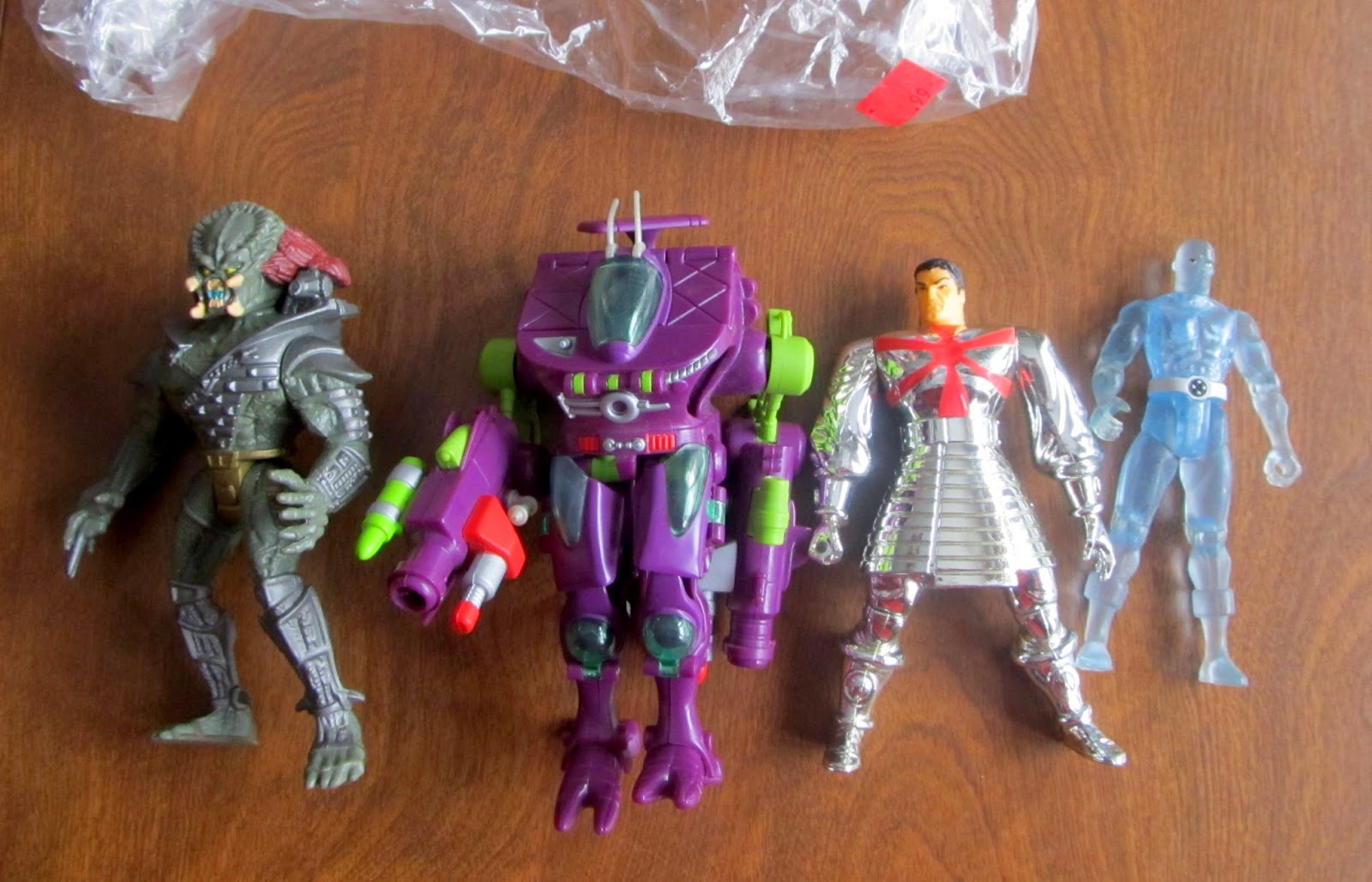 Here are the contents of the first grab-bag, 4 action figures for .99 cents. Not a bad deal considering I would have paid that much just for this guy: Toy Biz Iceman! This one is actually from 1992, which would have been after the point I would still have been trying to collect the X-Men line. I basically got a bunch of the 1991 releases and then stopped. But this one's pretty snazzy. I'm a sucker for a well done translucent action figure, and this is a well done Iceman for sure. 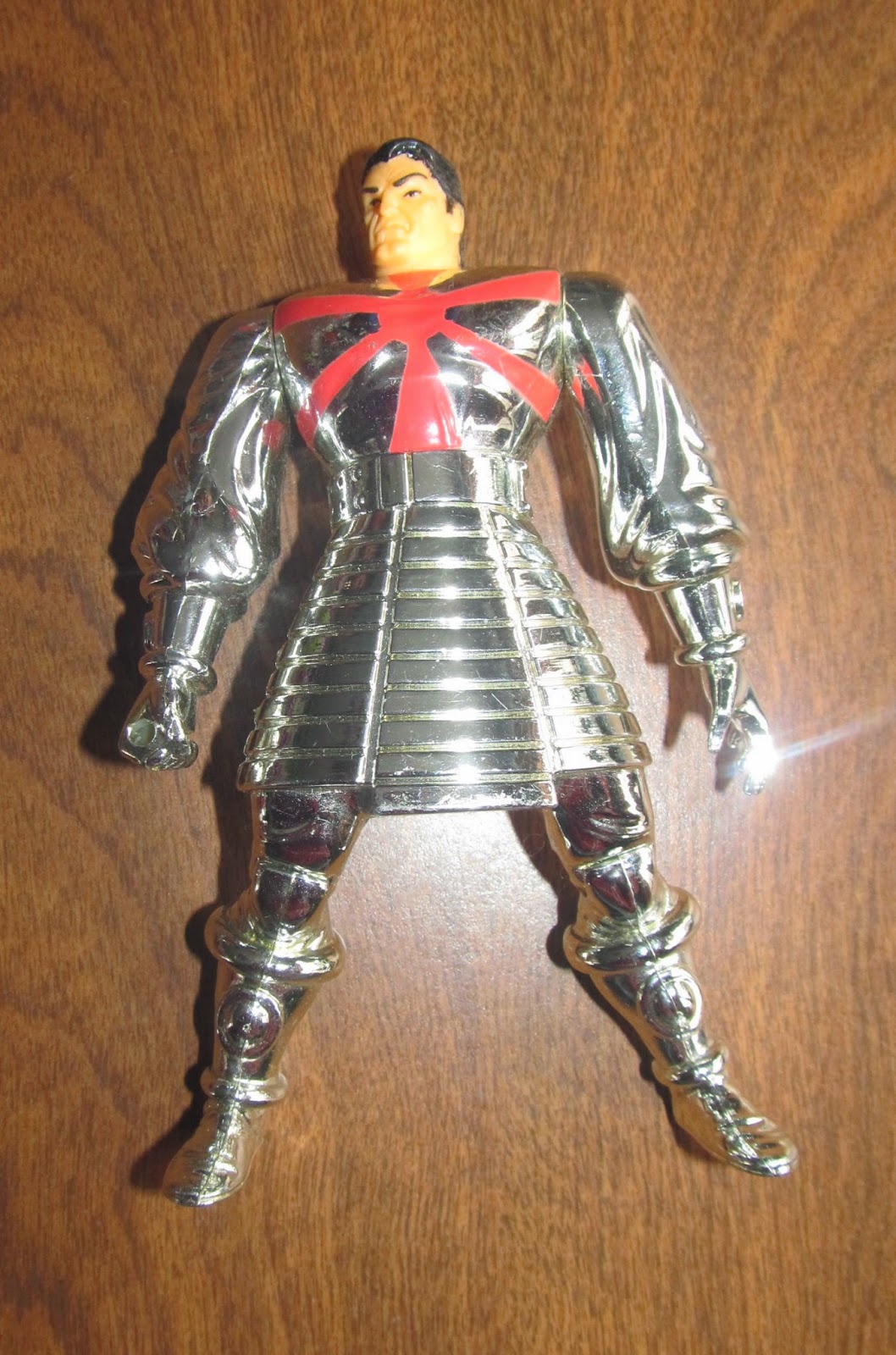 I definitely wasn't collecting action figures at all in 1994, when this Toybiz Silver Samurai was released, so I missed the boat. This one is unfortunately missing both his helmet and his sword. His legs are also a solid sculpt with the lower half of his body, making them non poseable and stiff... although seemingly random... his knees bend. Weird. So he can totally kick ass in a Limbo contest. Look out N'Astirh! (Only a select handful of you will get that joke without Google's help... Kudos to you... you know who you are.) 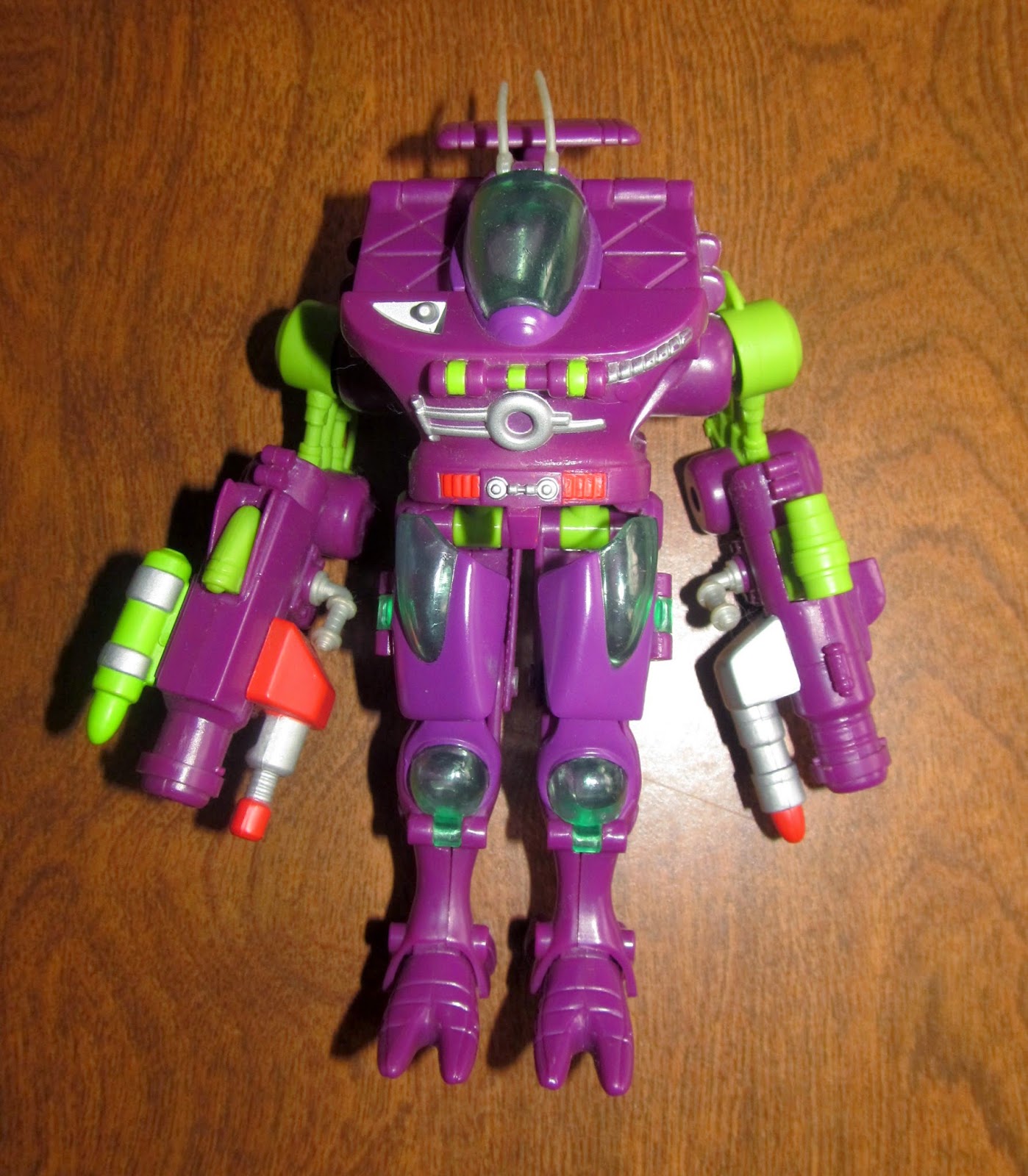 This next piece is interesting because I was completely unaware of the ExoSquad line in 1993. This is not the first ExoSquad toy I've found at Goodwill, but it is the only one currently in my collection. Apparently this suit belonged to a character named Typhonus. That's all I know. It's pretty rad looking though, and bringing home two mechanized battlesuits in one day is never a bad thing I guess. 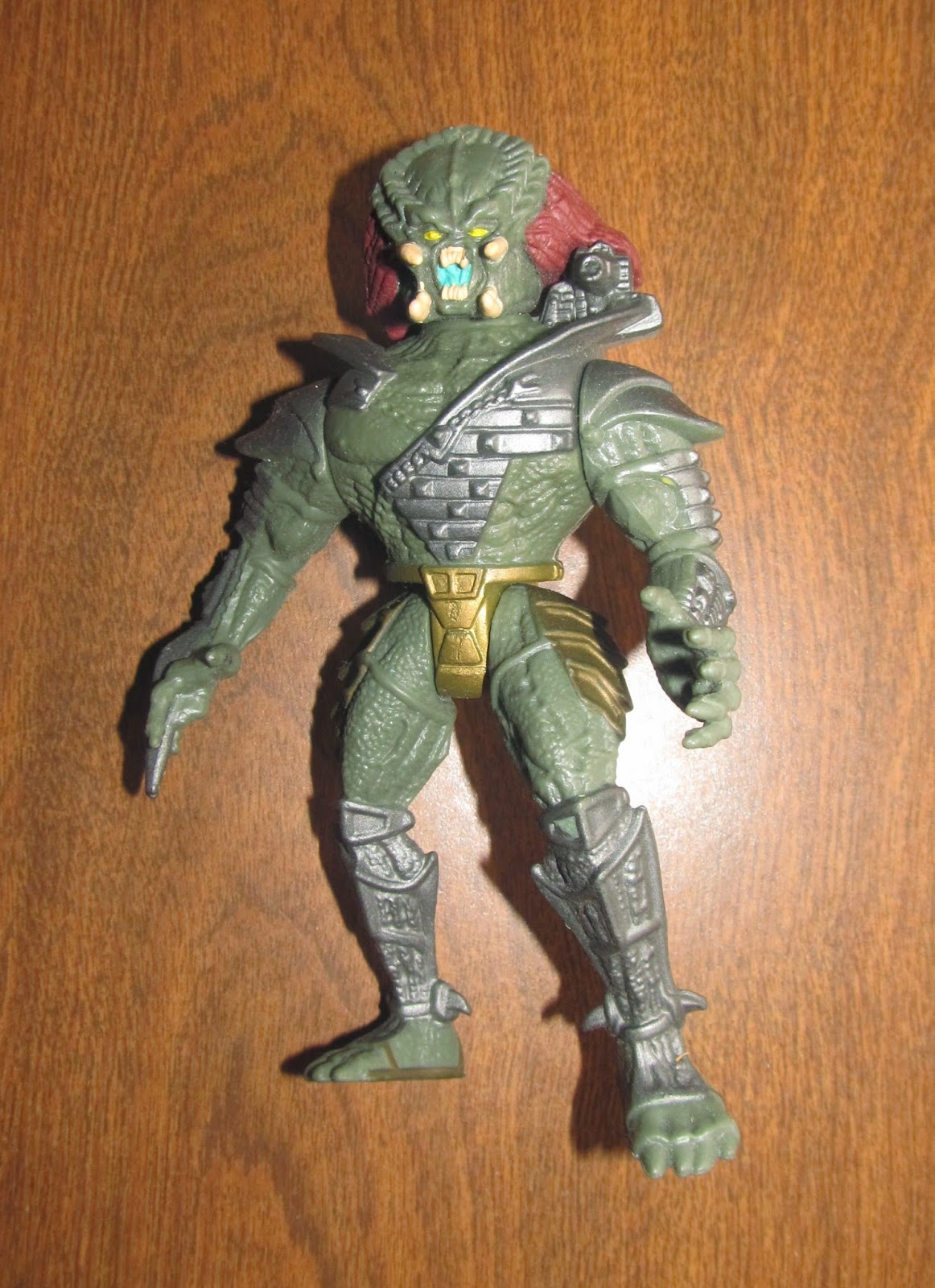 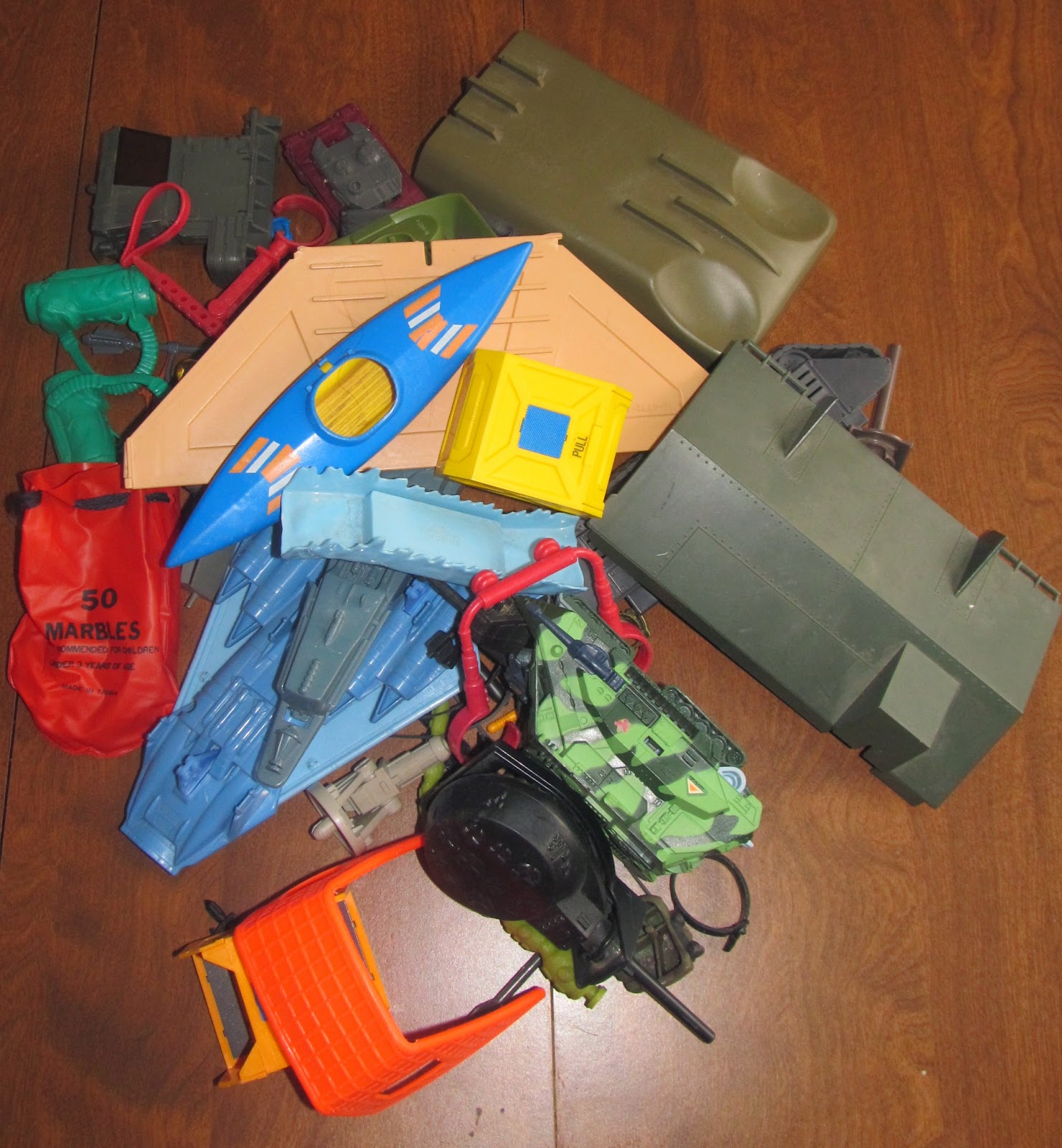 The second grab-bag was a collection of old junk. But the fact that this was old junk was significant enough to me that I brought it home. I don't remember exactly, but I think I actually paid 1.99 for this bag. But in the end, I felt it was definitely worth it. 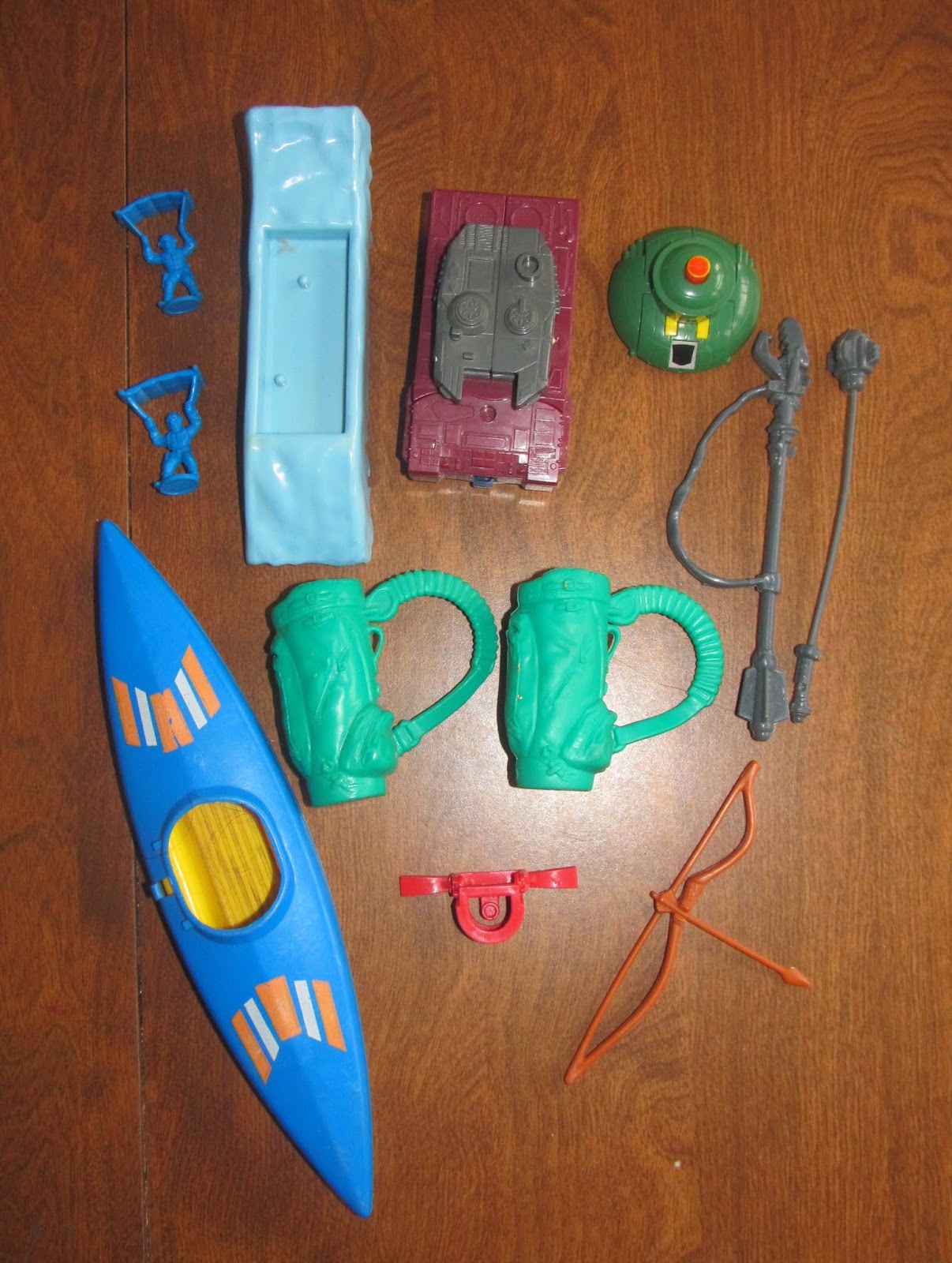 Here are some of the more exciting items in the bag. The kayak is a pack-in Adventure People accessory from the Daredevil Sport Van set. You can see some TMNT accessories here as well (Foot Soldier weapons for that Foot Soldier I don't have... -sob-), and these guys: 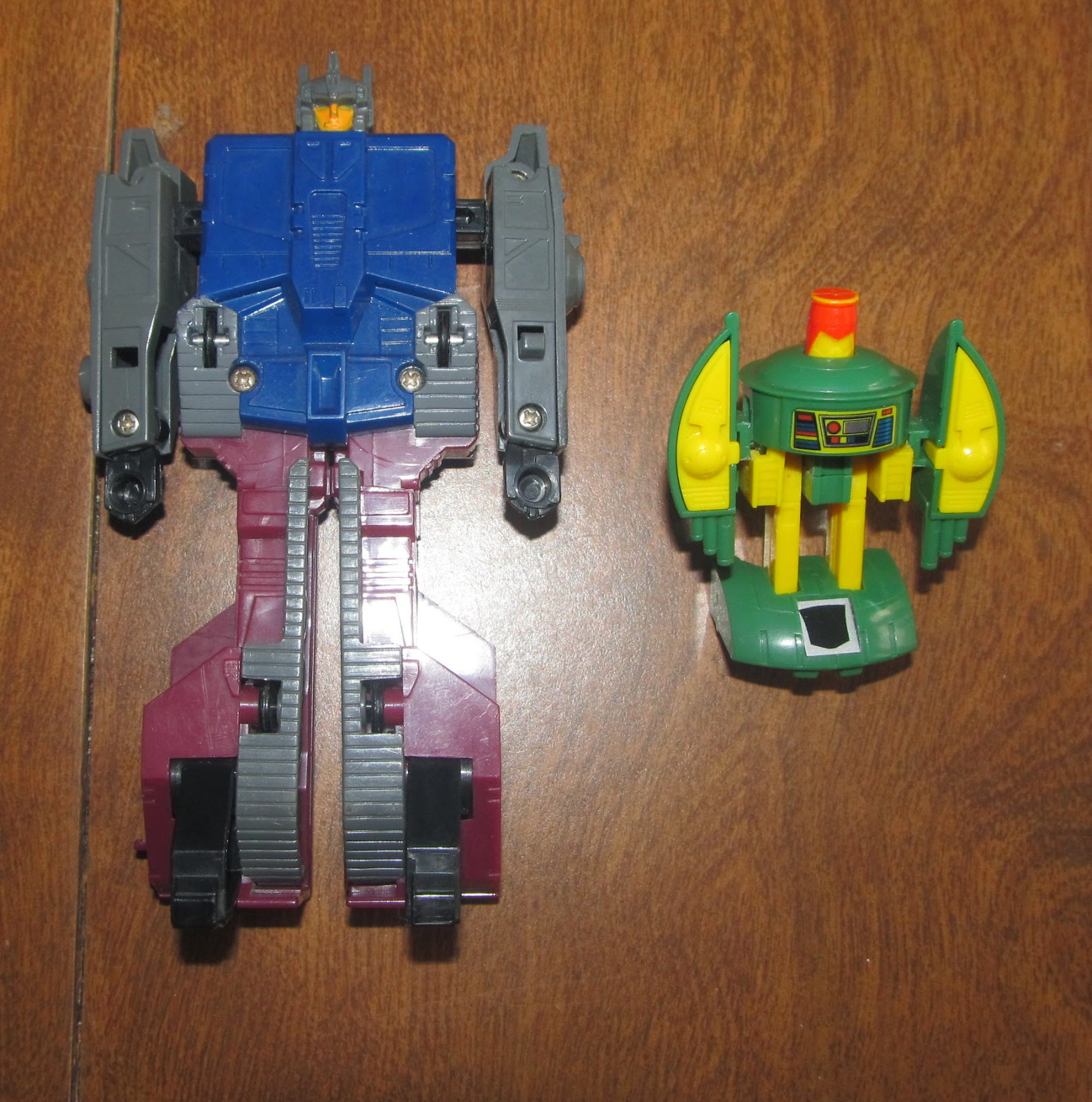 A couple of 80's-era Transformers! Even though I was never a big Transformer collector, I'm always happy to find these. The older the Transformers the better. What we have here is a Decepticon Quake figure from 1988, missing his two smaller "Targetmaster" robots, and Autobot Cosmos, the UFO Transformer. 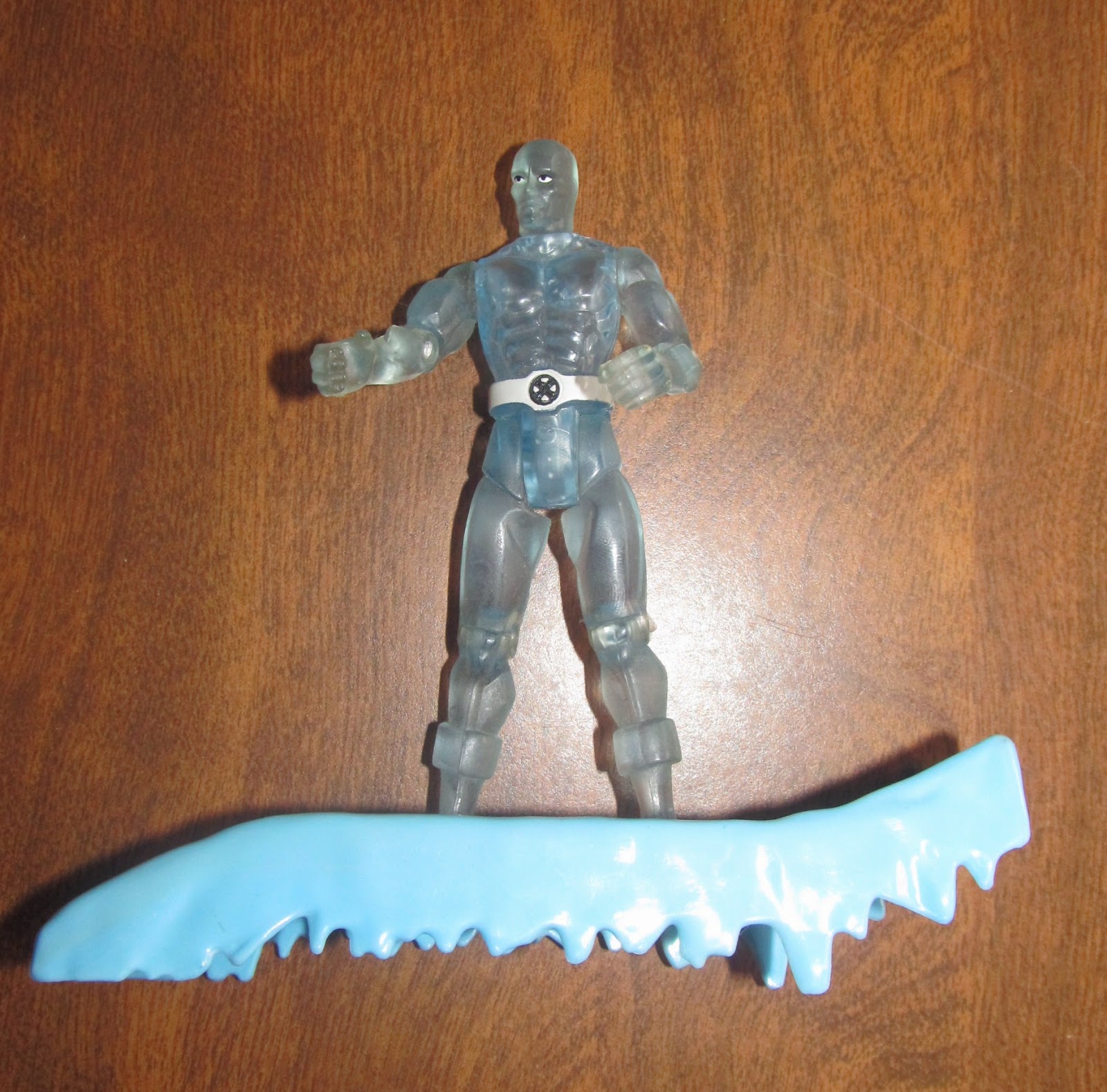 I also found Iceman's ice slide! So I sort of suspected that the contents of both of these grab-bags may have been from the same donor... or who knows... I have another theory at the end of the post. Either way, it pleased me to no end to see this guy and his ride reunited. 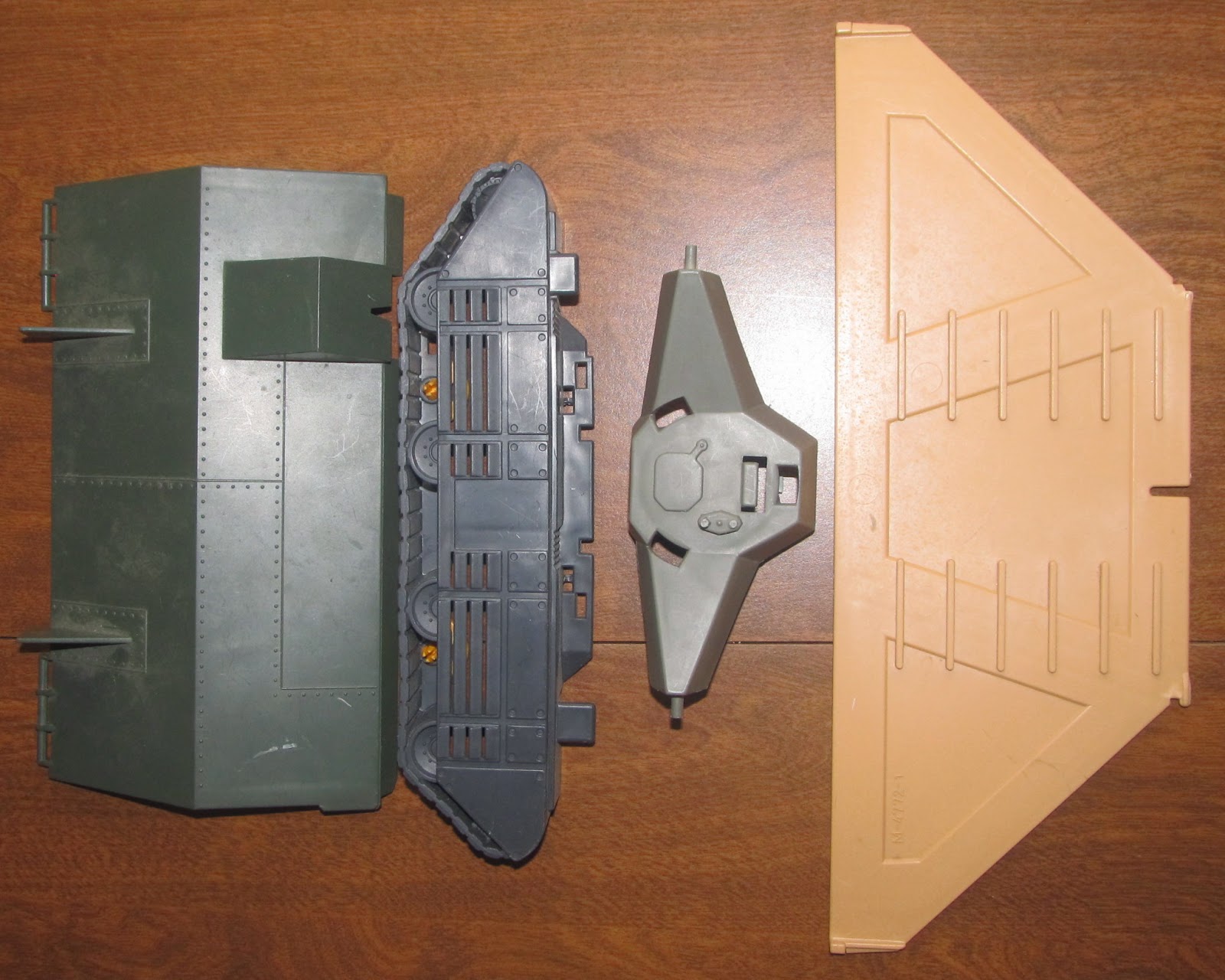 Now... to you these may just be some random plastic pieces. You may even recognise them as G.I. Joe parts... but what you might not realize is that these are pieces to the old Mobile Command Center, which for me is an almost completely unattainable holy grail. I had the MCC as a kid, I remember getting it on Christmas morning in fact, and from that day forward, it served as the headquarters for all of my good guy characters, regardless of what franchise they were from. That thing was pure playset porn. Don't believe me? Go check it out for yourself over at YoJoe.com!!! 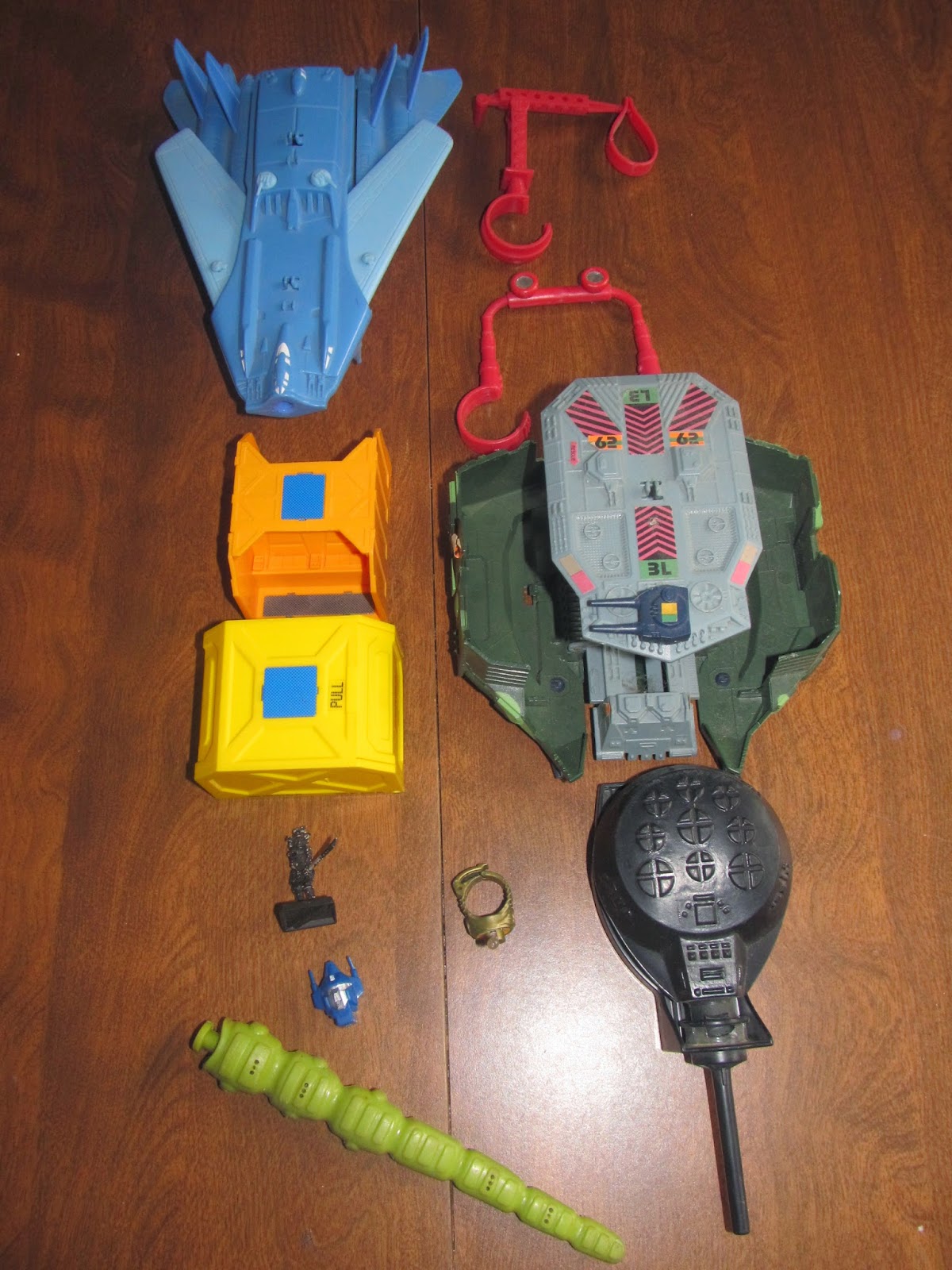 Some other random fun pieces here as well, the yellow things with the blue squares on them went to a StarCom playset, which was a bunch of mini-figure spacemen with magnets in their feet. The green tail belongs to a Golobulus figure if I am not mistaken, and the roundish black thing with the thing sticking out of the bottom is some sort of air-pump for a launching toy of some sort, I just can't remember what. The ring in the middle is from a Matchbox Ring Raiders set (mini jets like Micro Machines). The rest I don't really remember at all. 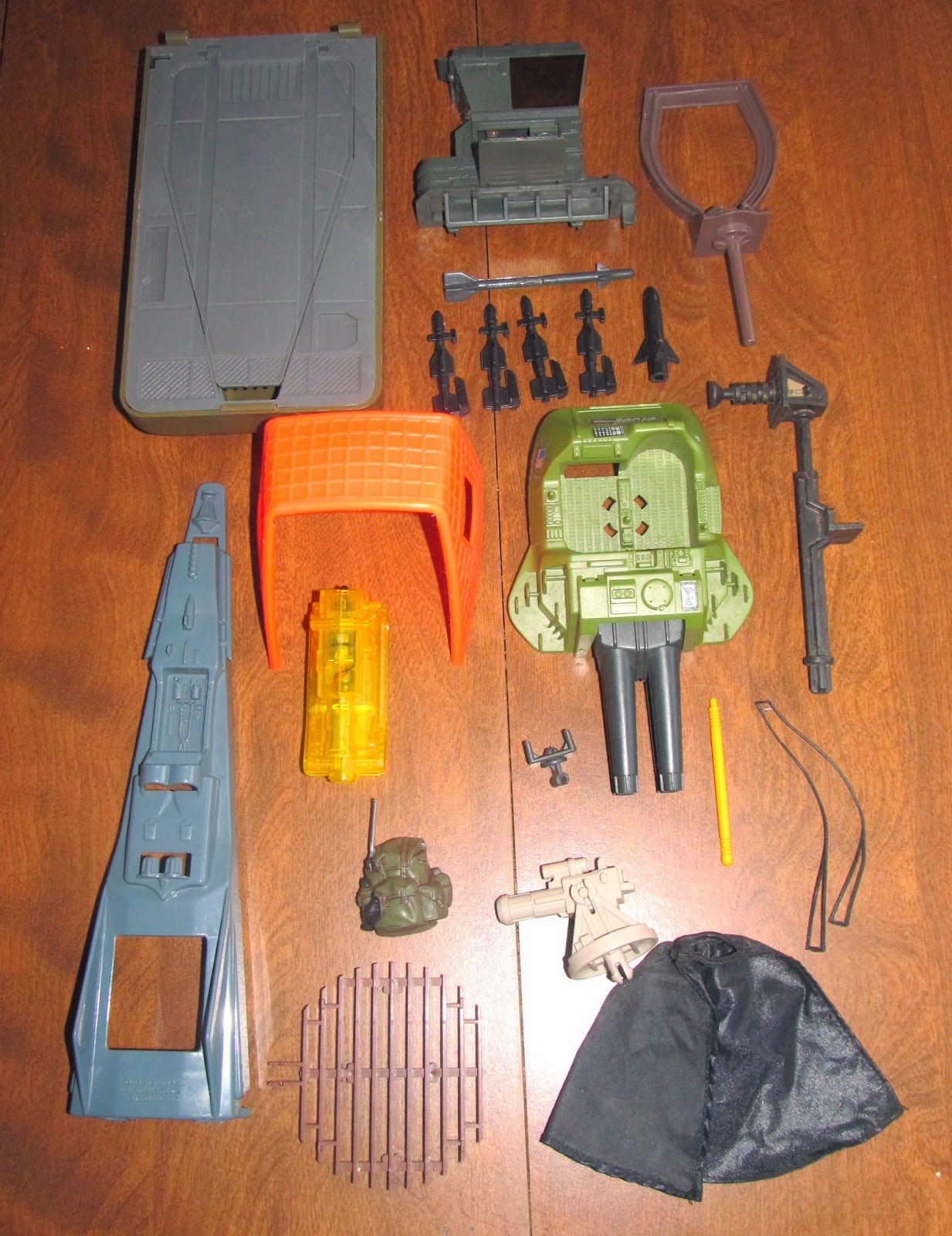 Here's one more pile of junk out of that same grab-bag, none of which do I recognize. I think there might be a couple more Mobile Command pieces mixed in there, like the round grate thing and the tan gun turret, but I don't remember off the top of my head. Nice cape though. 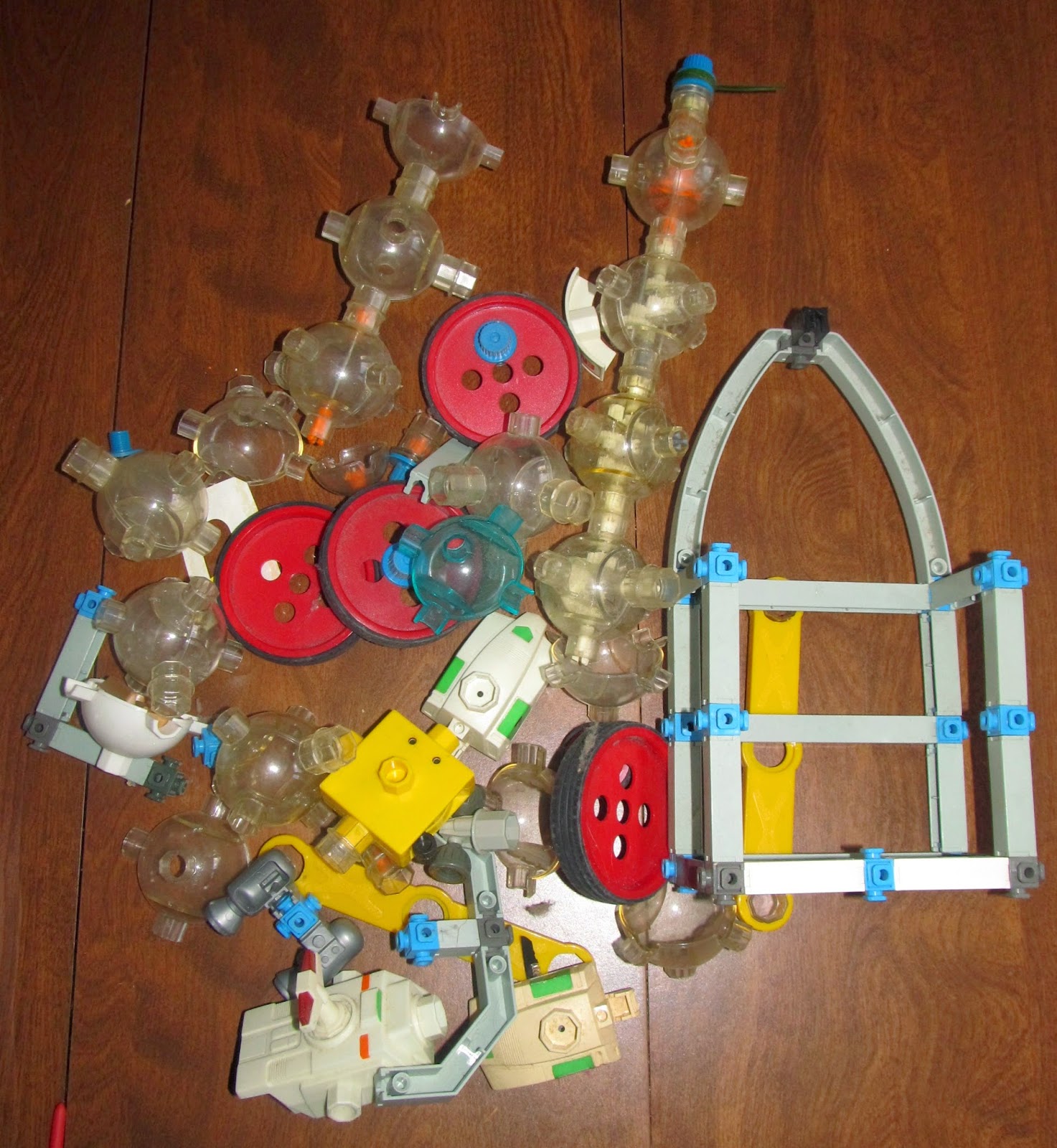 Finally, there was one last bag that had some Construx pieces in it, and a Capsela set of building toys that could be used to build motorized vehicles or "robots".  Weird thing is... I'm pretty sure I know where most of these toys came from. This last bag was the clincher. It COULD be a complete coincidence... but I knew a kid who owned this Capsela set, the Construx and StarCom sets, and had a TON of G.I. Joes when I lived in Bar Harbor ME. I wouldn't be willing to wager a TON of money on it, but I'd bet a fiver at least that his mother probably cleaned out a bunch of his old stuff and donated it. It's all just WAAAY too familiar to be a coincidence. I don't know how popular the Capsela sets were back in the day, but I think they were fairly expensive, and I didn't know a lot of kids who had them. I just... I remember these toys. It's kind of surreal. I don't think the 90's toys were probably his, like the X-Men toys or the TMNT mecha... but I think I actually now own some of another kids toys that I knew back in the day. That is a weird feeling. Why is that weirder than if it was a complete stranger? Dunno. Just is.

Anway! That's it for tonight kiddos! I'll be back with more Geeky Goodwill Goodies in no time! So until then... Happy Hunting!
Posted by Derek Ash at 7:28 PM