I'm trying to get back in the swing of things over here at Goodwill Hunting 4 Geeks... and that includes doing more of the League of Extraordinary Bloggers posts. So what's this week's topic? Let's take a look, shall we:

This is not an ambiguous topic at all really... unless you just want to be one of those perverse weirdos who turns it on its ear and does a post on "Joe Vs. the Volcano" instead of the obviously referenced G.I. Joe here. (I LOOOOVE "Joe Vs. the Volcano" by the way, so that wasn't totally off the table...) So I scrounged around in the cave looking for some G.I. Joe books I've been meaning to share. I'm going to travel backwards in time here and share the most recent one first, and then work my way back to the oldest one. Here we go! (Or, if you'd rather skip the picture book stuff, there are a handful of pictures at the end of my G.I. Joe toys collection at the very bottom.) 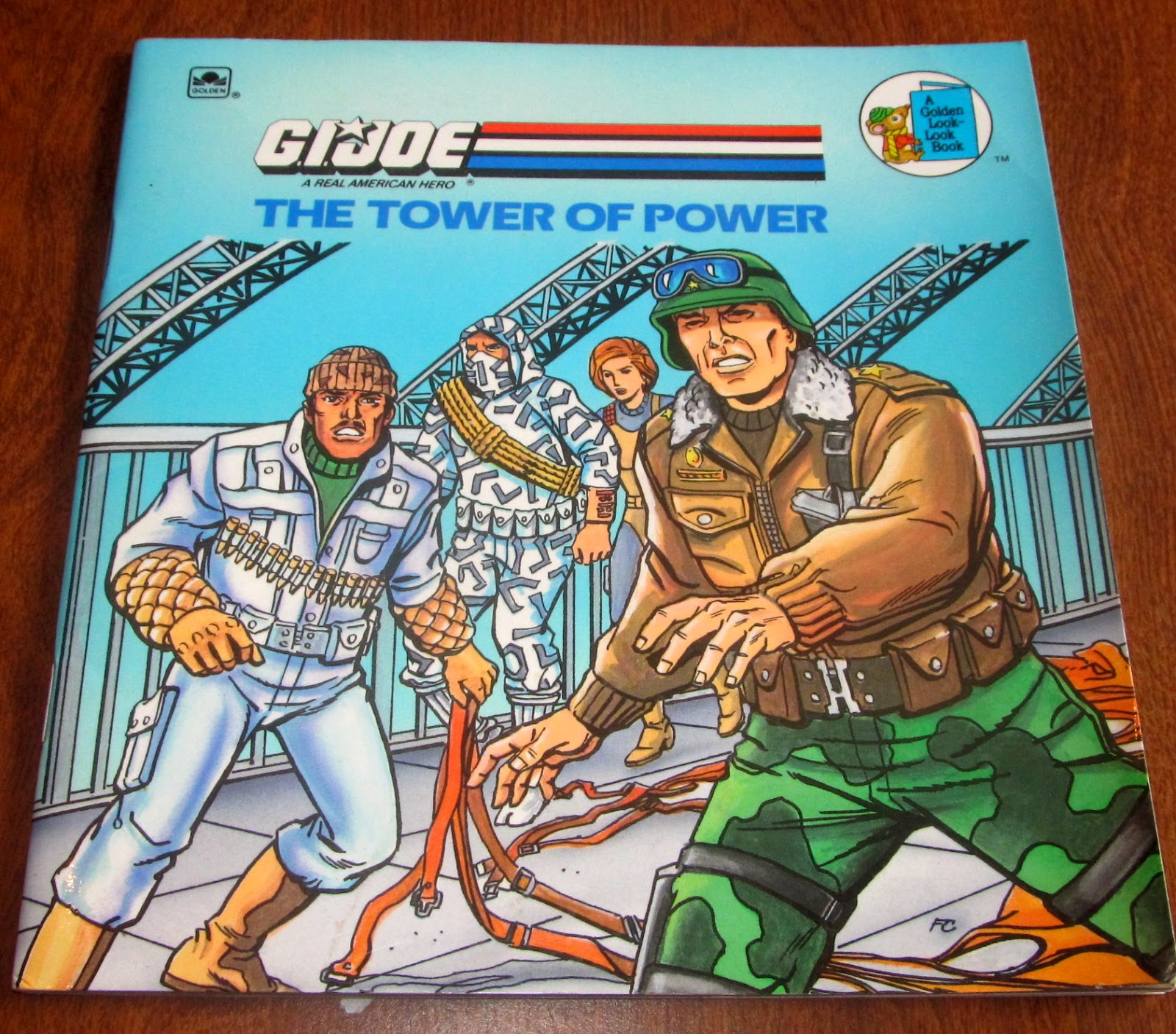 First up, we have The Tower of Power which stars Hawk, Scarlet, Stalker, and stupid-I'm-a-Joe-now Storm Shadow. Looking at him here on the cover he looks like a fat guy playing paintball who got into an industrial stapler accident. Ugh. I hated when Storm Shadow became a Joe. This book was written by Robert Loren Fleming, and was illustrated by Fred Carrillo and Kim Ellis. It was published in 1990. 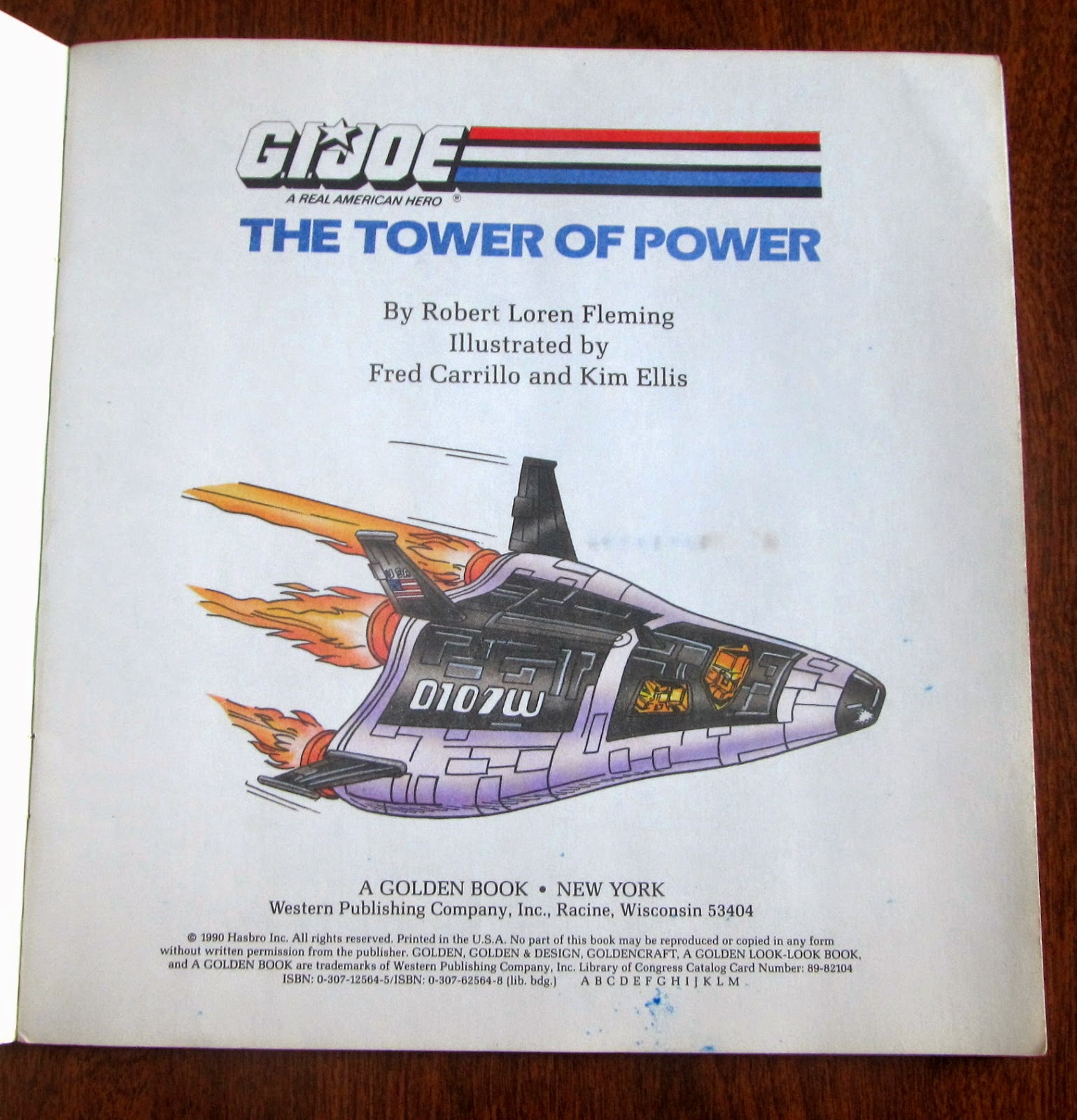 So the premise of the story is that Cobra Commander turns the Eiffel Tower into a giant super-magnet, stealing all of Paris's electricity because apparently he is a complete ass-hat under that hood. 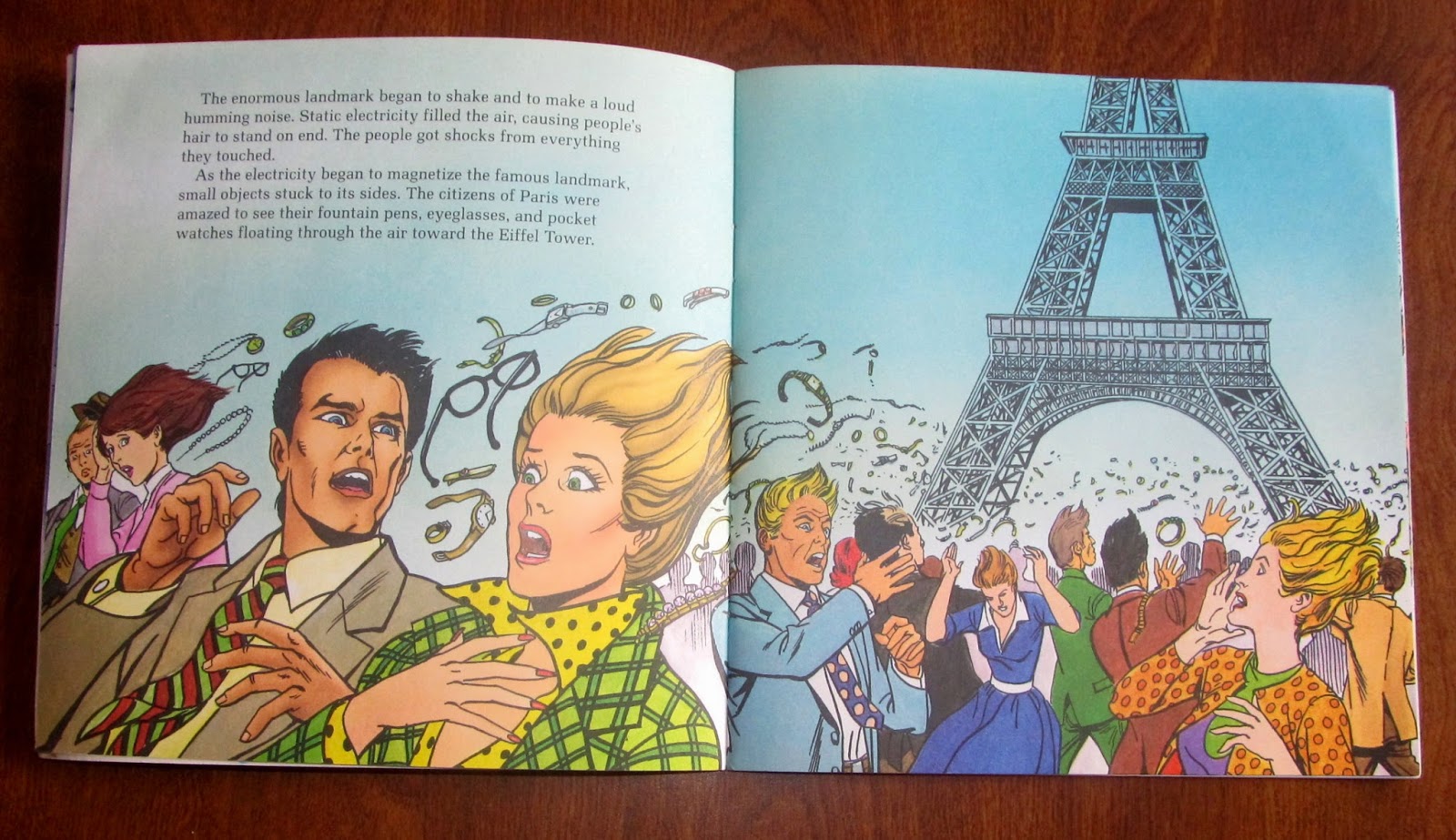 I featured this picture because of all the confused Parisians who are inexplicably NOT being strangled to death, decapitated, or simply dragged into the air by their jewelry. 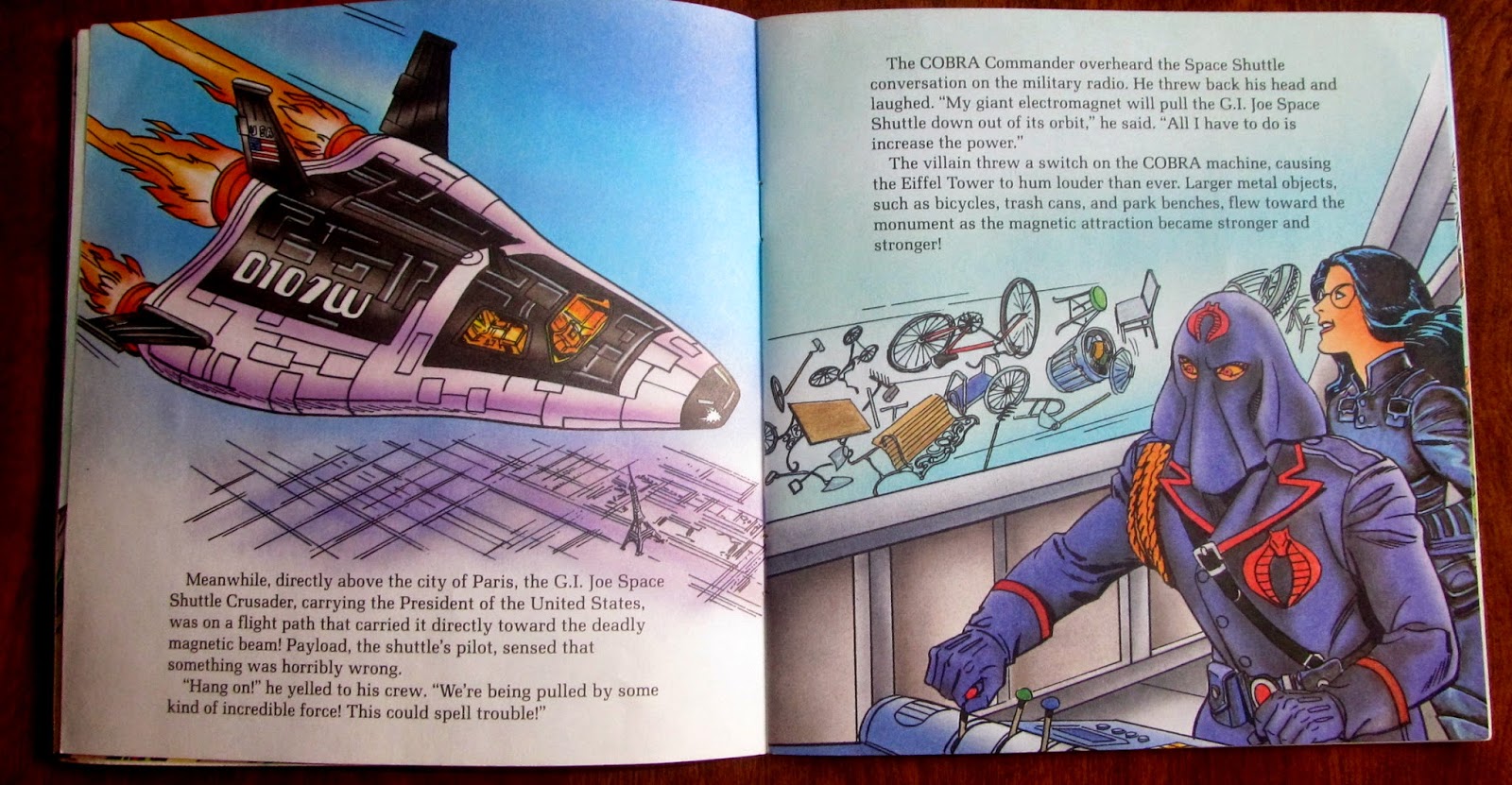 Because this mission obviously required a SPACESHIP carrying the President. 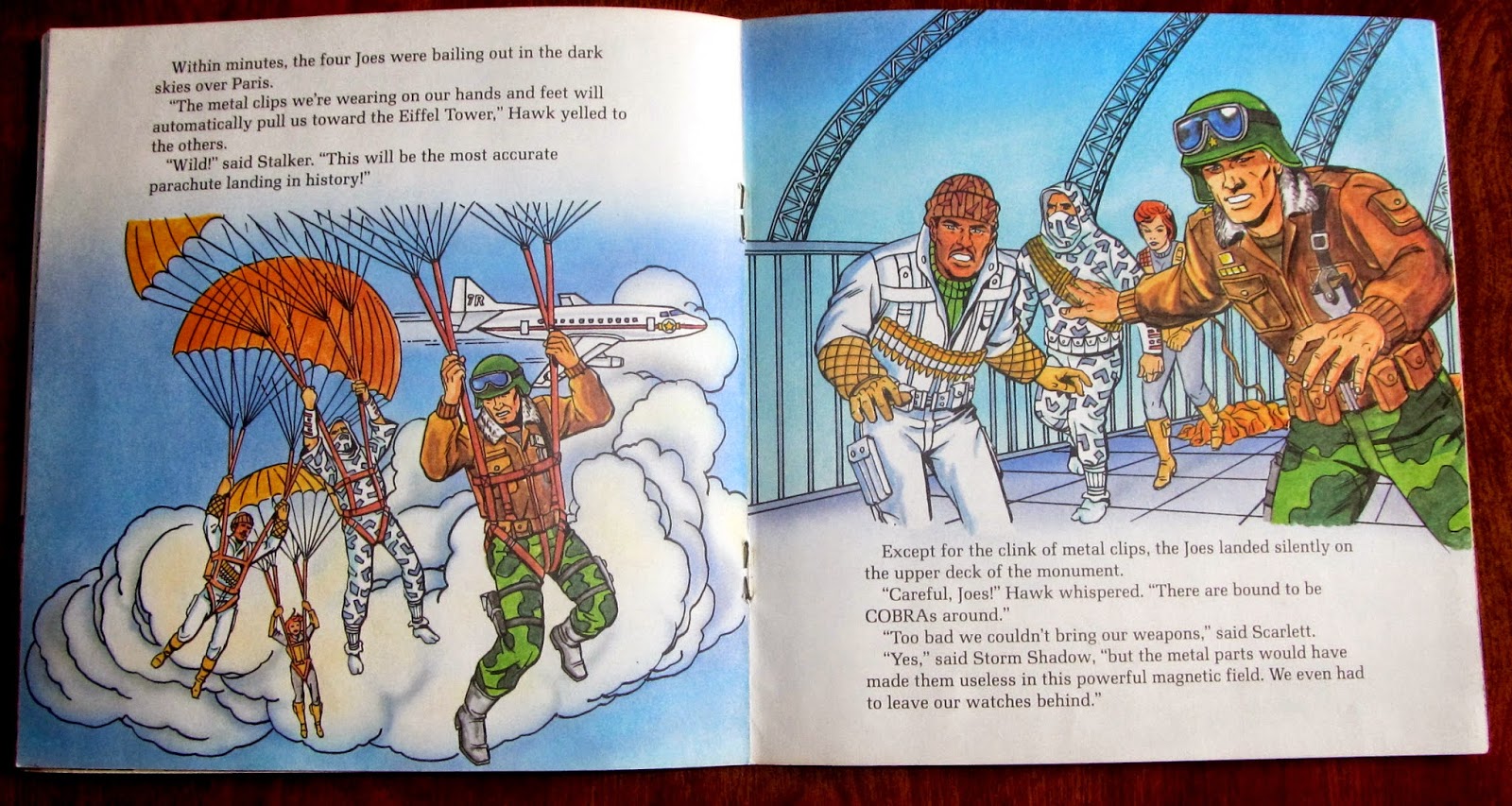 There is nothing less stealthy than a husky ninja in a snowsuit and orange parachute.

A completely wasted potential girl-fight, and a space ship landing under the arc de triomphe. 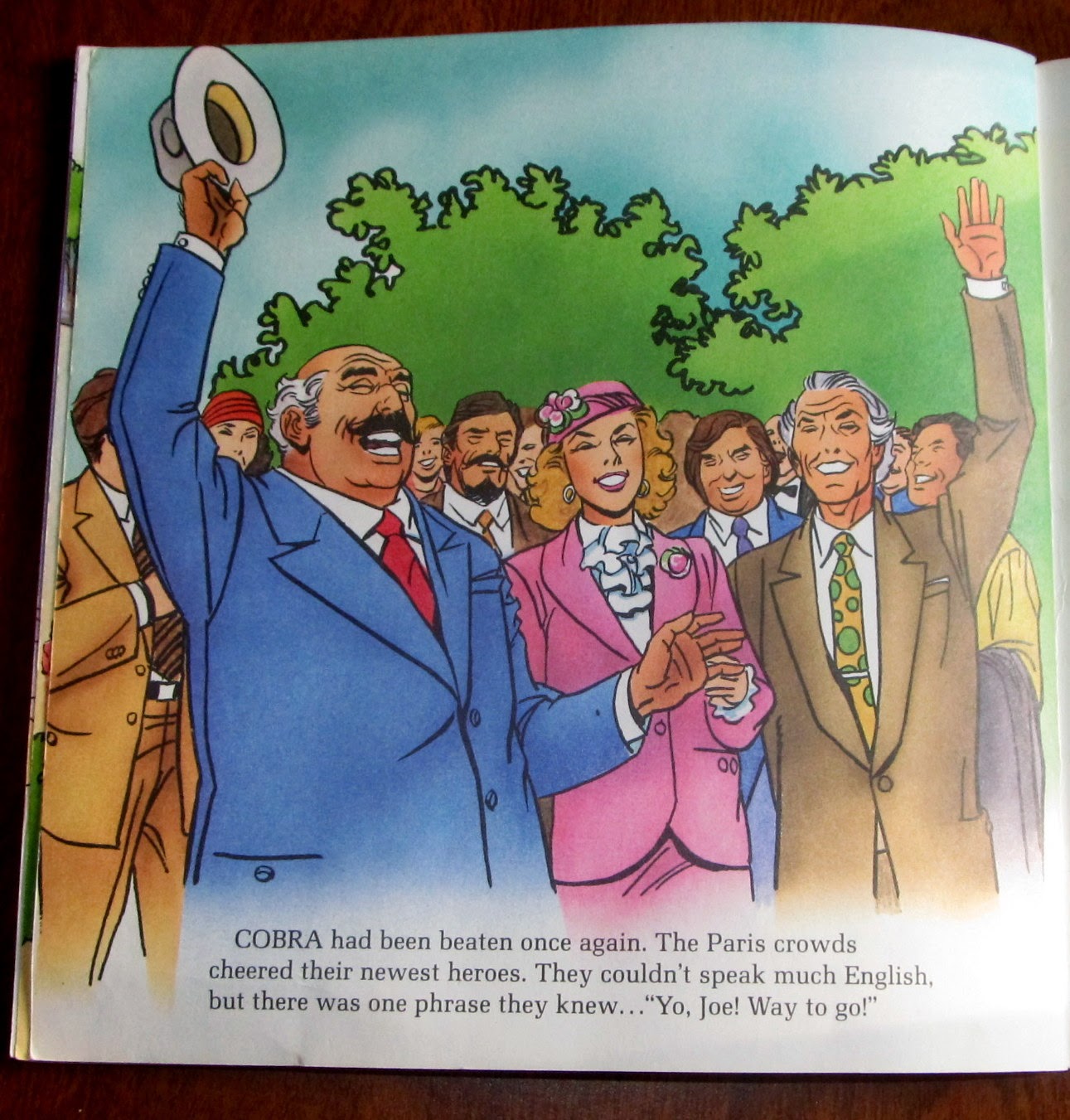 Just how every kid wants his Joe book to end: with a shot of frumpy, anonymous civilians. 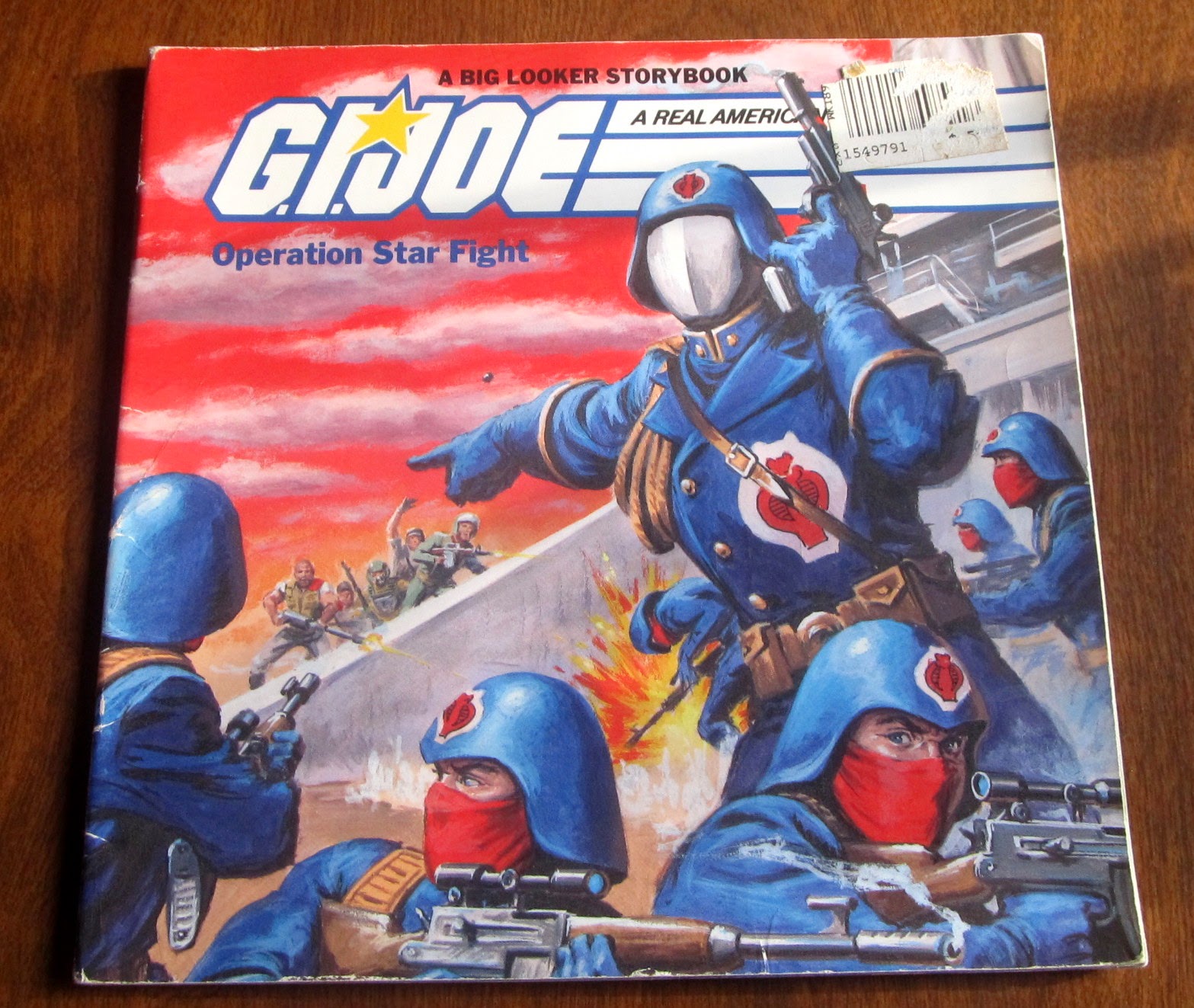 Okay, now that THAT's over, let's take a look at Operation Star Fight. This one is a personal favorite based solely on the awesome artwork by the legendary Earl Norem. It was written by Barbara Siegel and Scott Siegel and published in 1987. 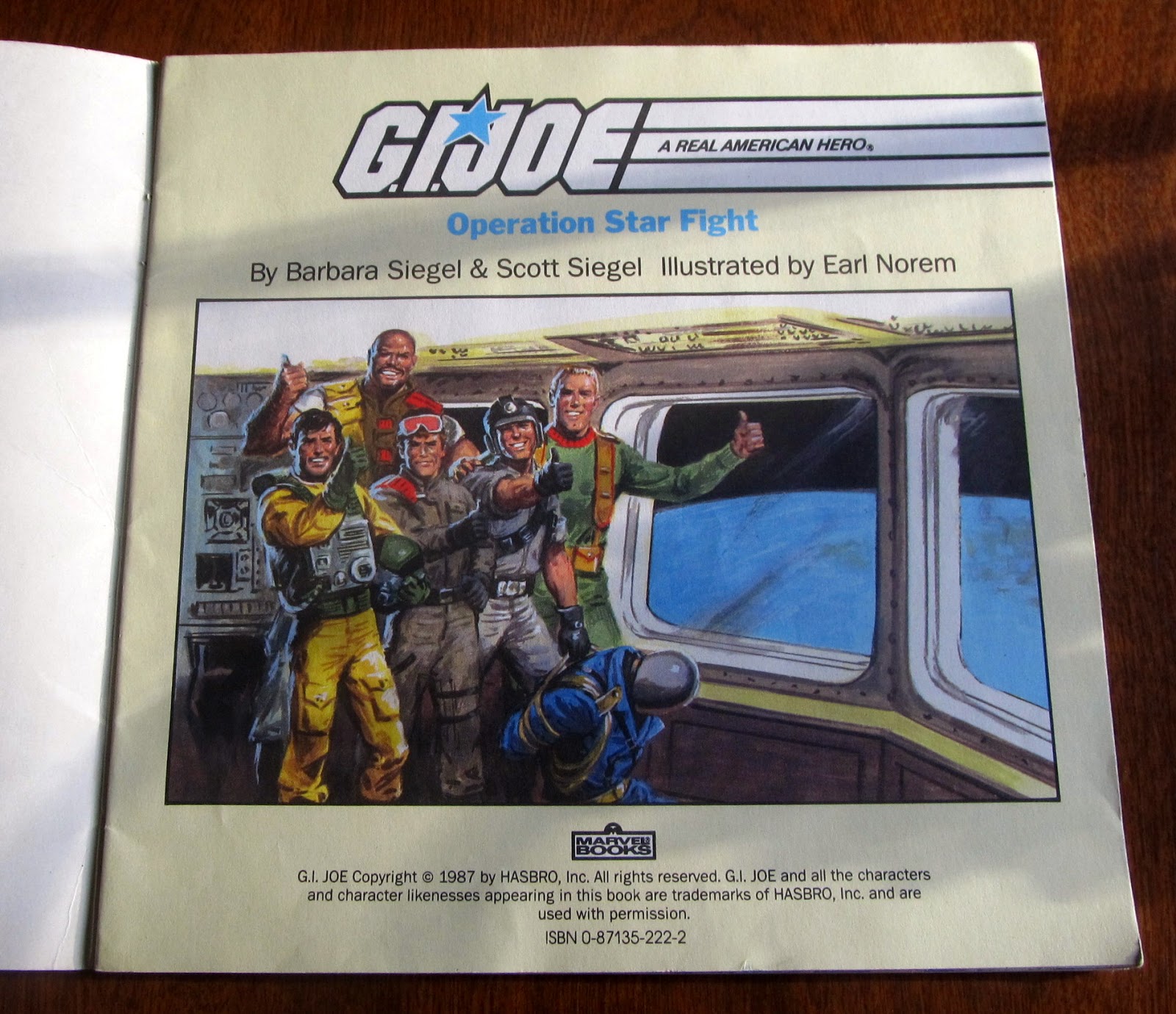 In this story Cobra Commander leads an army of Vipers in an attack on Cape Canaveral. This time around we get Hawk, Roadblock, Mainframe, Airtight, and a Joe who appears to be Lowlight (the entire book only names four Joes and actually makes direct references to only 4 Joe soldiers throughout, even though 5 are clearly visible) fighting an army of Vipers trying to... hijack? destroy? delay annoyingly? a launching space shuttle.

There's a pretty tense scene here where they make you wonder if the Joes chutes will open or not... making the real enemy the guy whose job it was to inspect the safety gear before tossing the Joes off the plane. 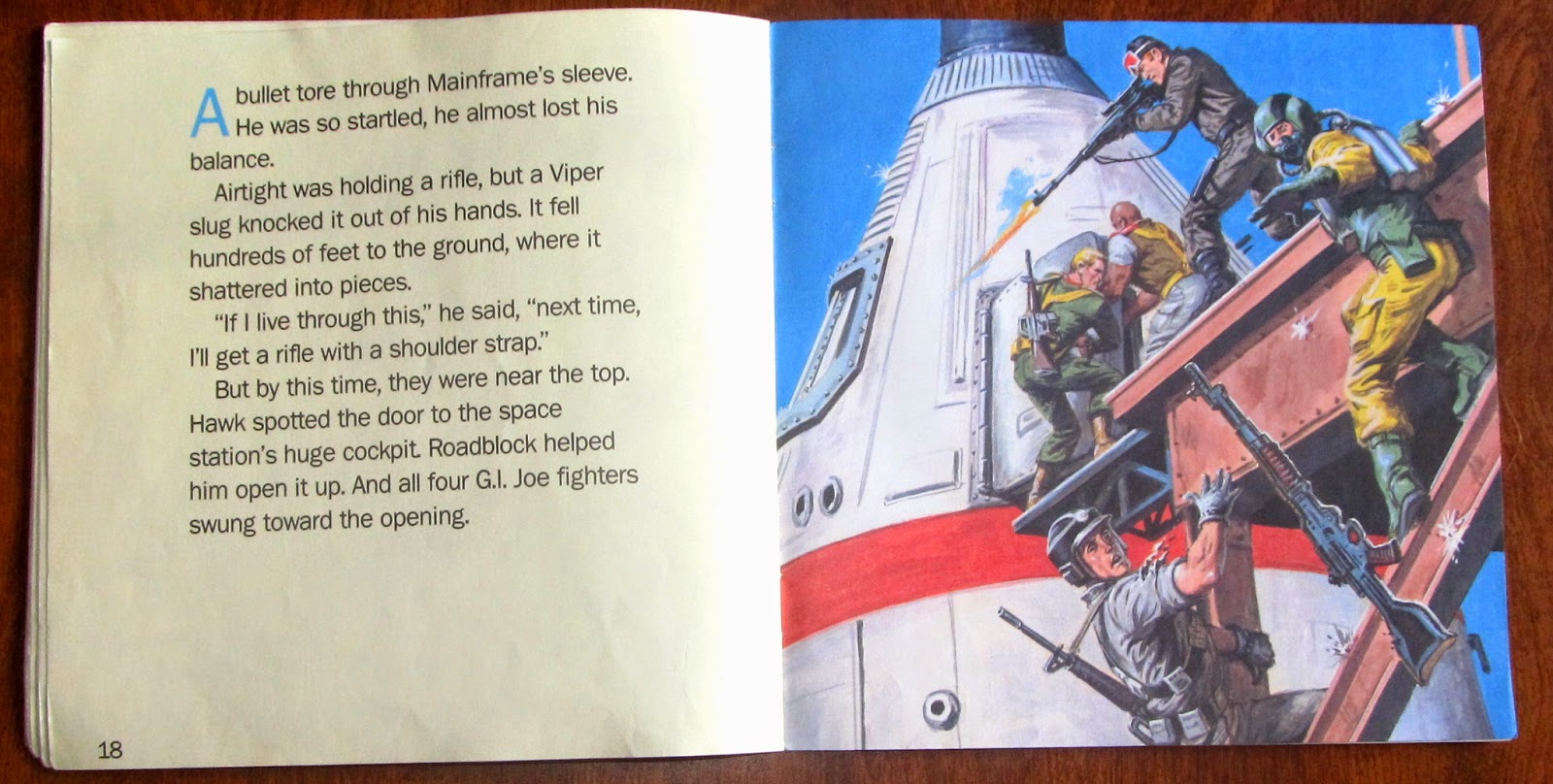 Hijinks ensue as Airtight very nearly nicks an artery or loses his hand entirely. He's the one waving goodbye to his gun in the bright yellow suit with the explosive gas-tanks on his back. This page also references "all four G.I. Joe fighters" even though you can clearly see five. Lowlight is a ghost here. 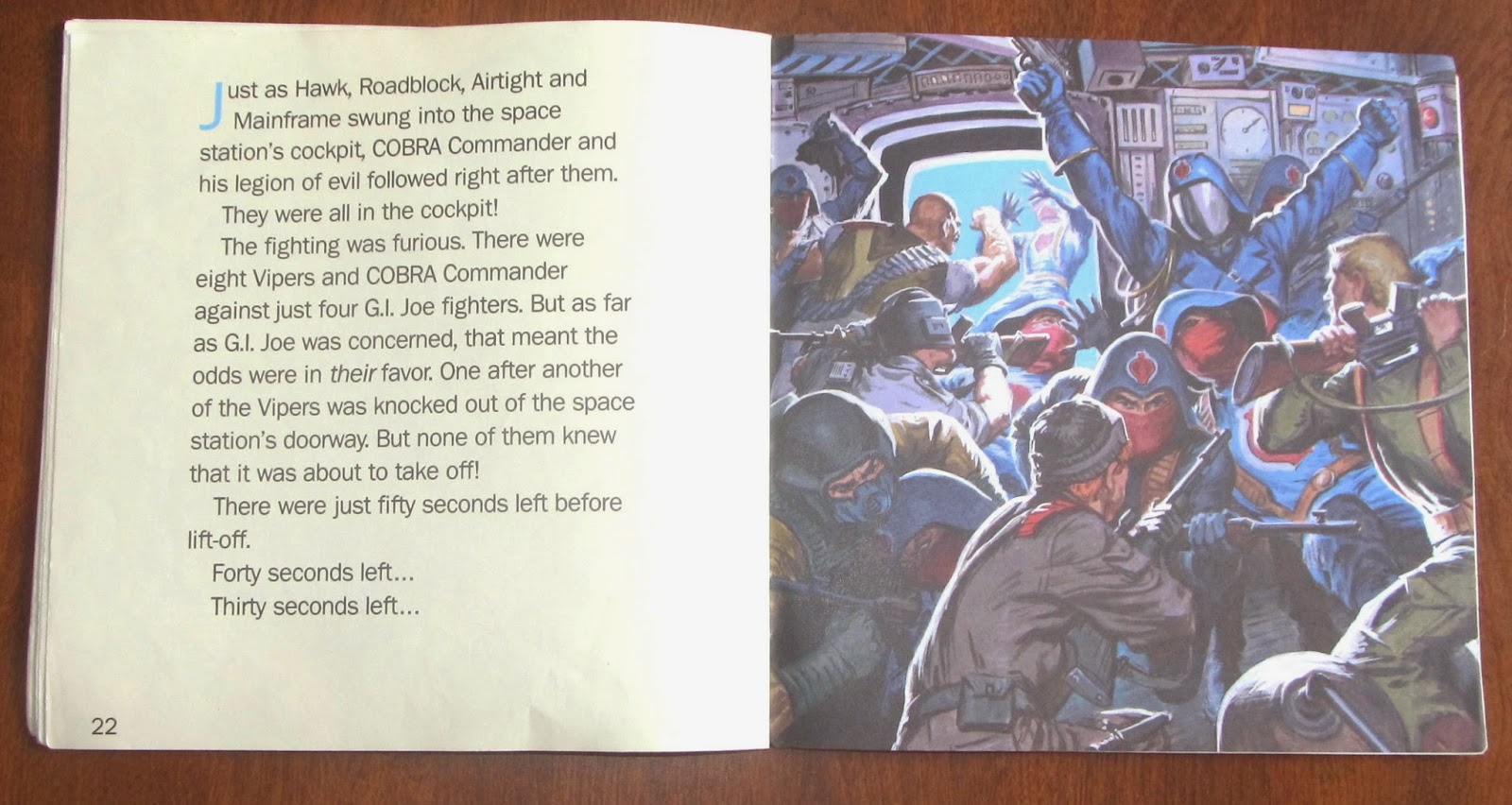 I like this one because you can see Roadblock straight-up murdering a dude in the background. Remember where that door leads? The ground. Like hundreds of feet below.

Cobra Commander looks so excited to be losing! 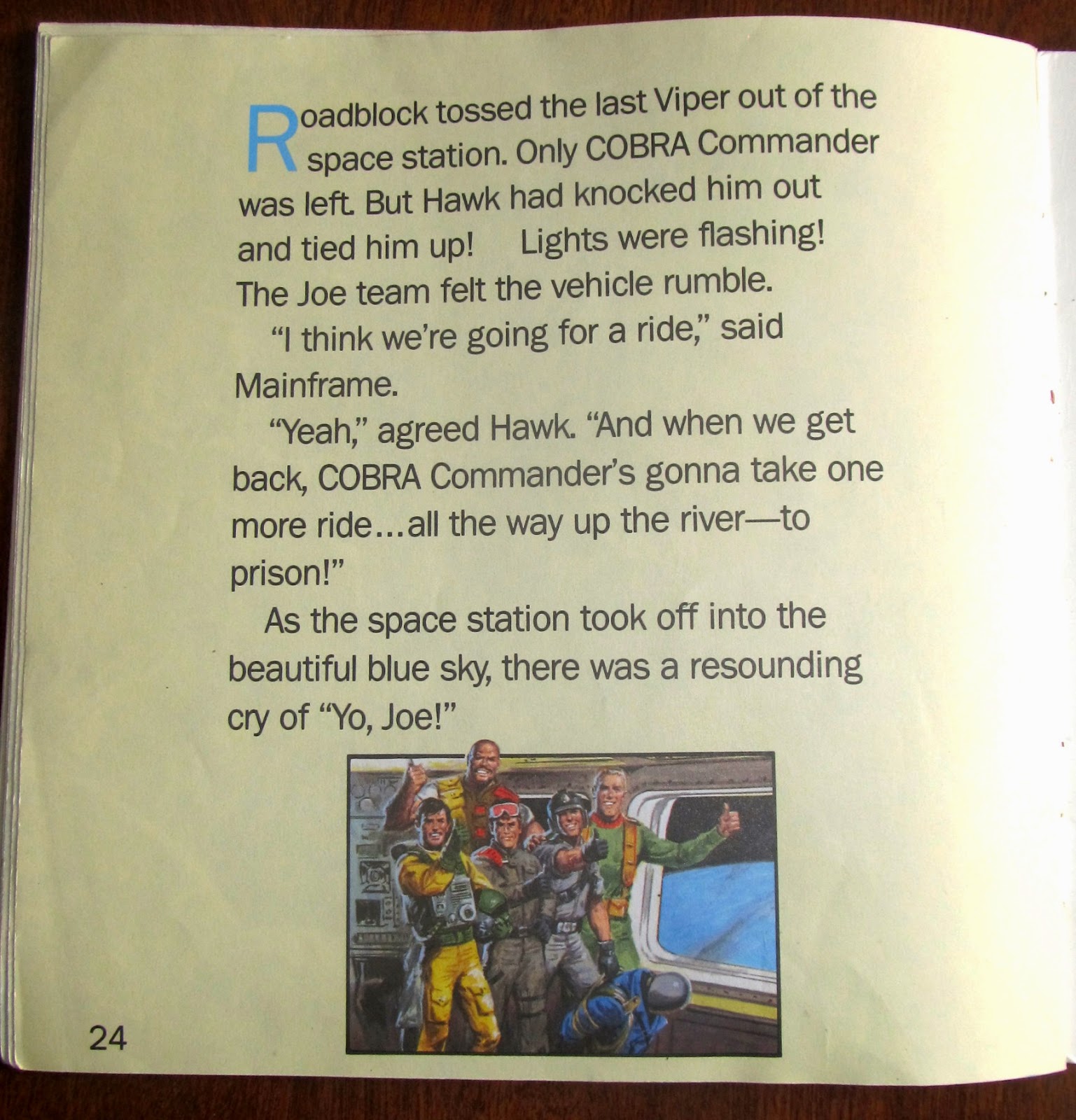 This is the image from the title page, where the Joes are posing for a candid photograph while a homicidal maniac is bound at their feet. It's weird seeing the Commander with a bald metal noggin and no blue helmet. 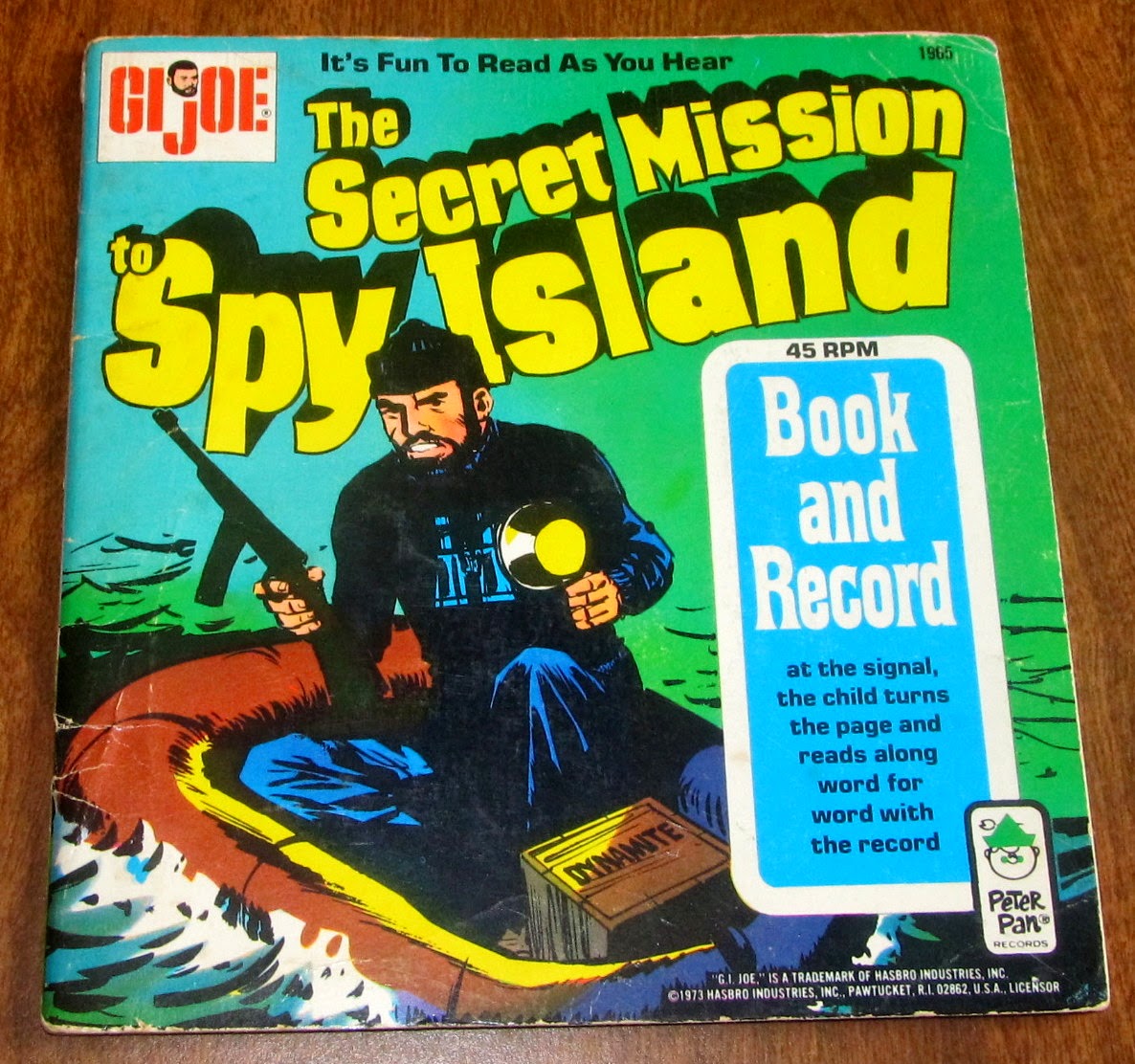 I saved what I feel like is the very best for last! This is the original GI Joe in The Secret Mission to Spy Island. It's a Peter Pan book that originally came with a listen-along record. It was written by Ken Sobol, Illustrated by Carl Pfeufer, and was published back in 1973. It is also FULL OF CRAZY. 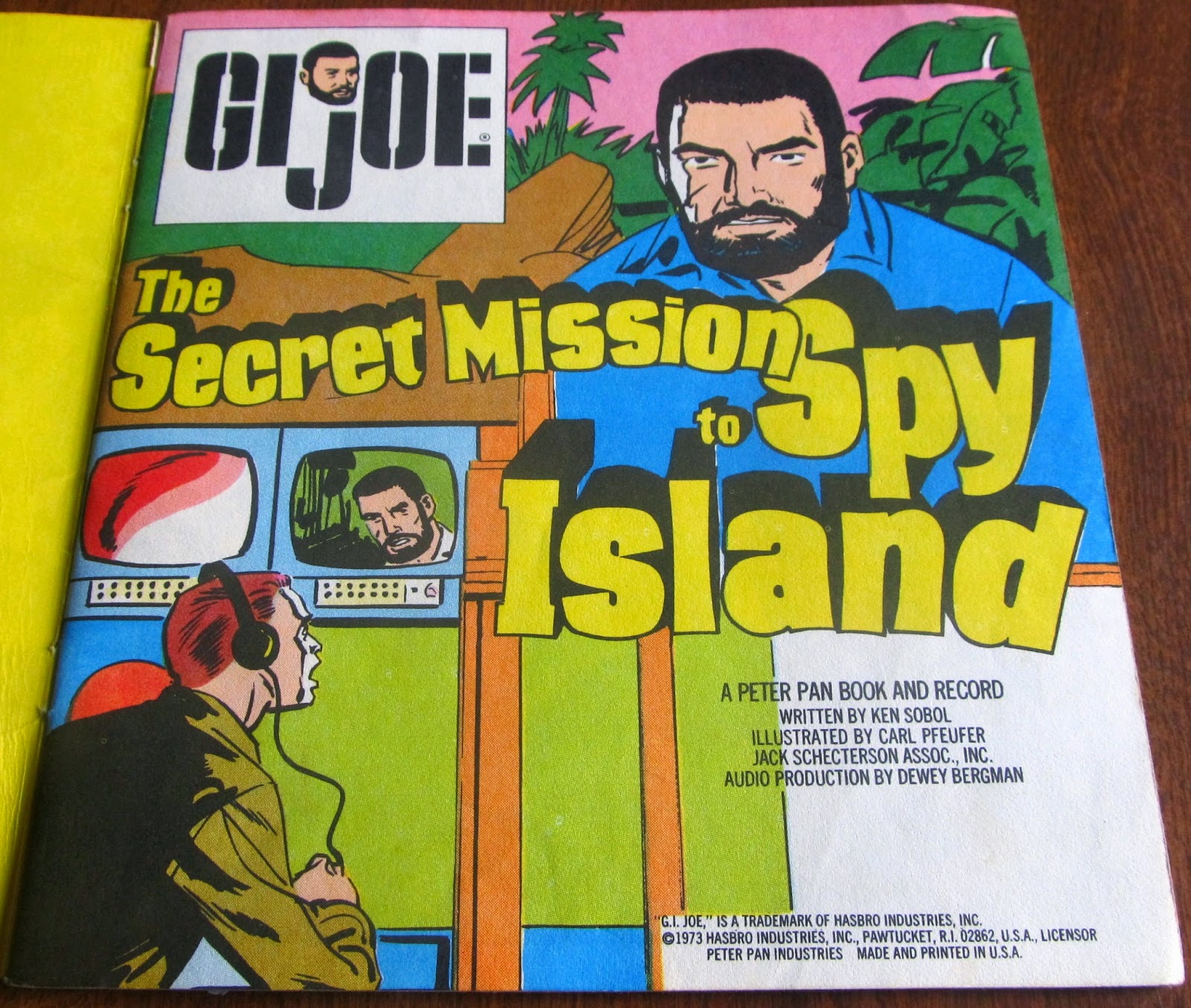 So it basically boils down to some spies stealing some... missile plans... (I think?) and going off to Spy Island. Where Joe goes to retrieve the... missile plans (again... not really sure, the book's strong point is not coherency. Joe just needs an excuse to go mess up some bad guys basically). And some crazy stuff happens. 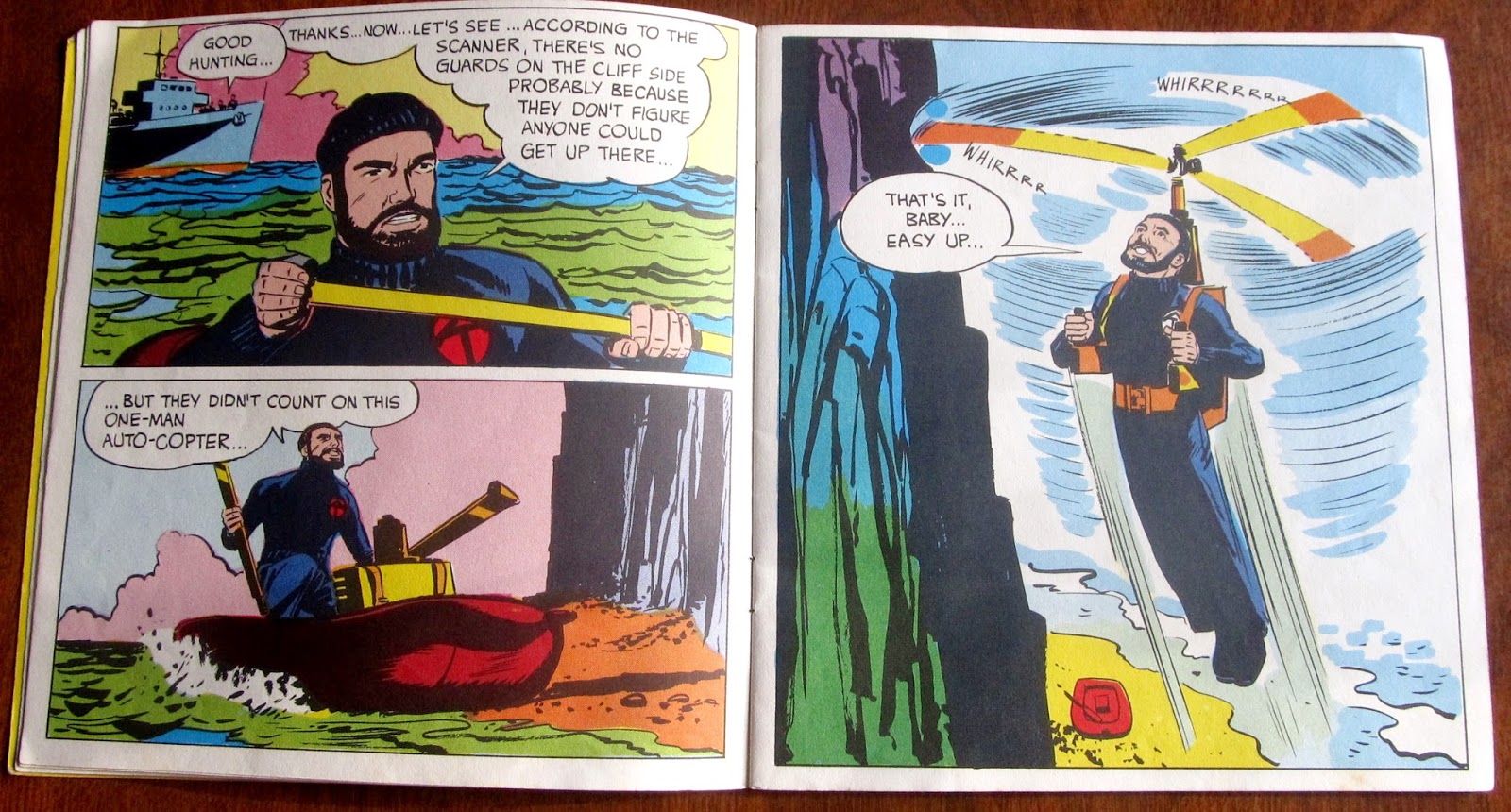 This shot of Joe using a tiny personal helicopter and NOT immediately flipping over and blending himself into chum is easily one of my favorite images in the entire book. From the "That's it, baby... easy up..." speech bubble, to the look of pure "Wheee!" on his face... this thing is a framable piece of heaven. 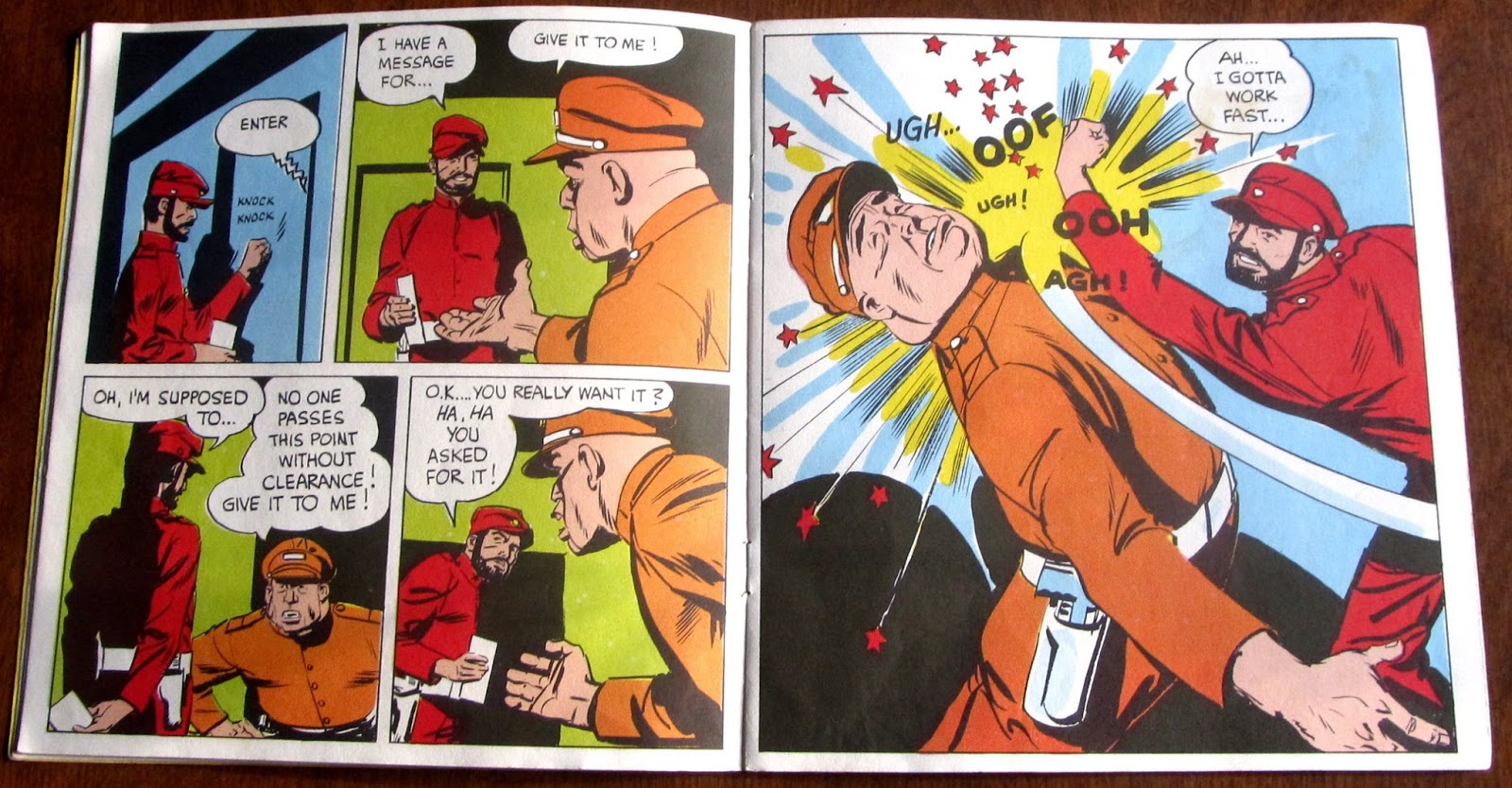 Awwww KNOCKOUT!!! Yeah! I love how they put all this focus and energy on this K.O. punch just to have Joe kind of mentally ticking off his to-do list in the background, like he gets distracted punching out villains all the time. He's all like: "Hmmm... did I turn off the stove before I left? Aw man, did I just knick my knuckle on his tooth? Gross."

Lots going on in these pages, but most importantly, we see it takes like four blue-clad cads to subdue Joe! And he's all just like, "Hey, I'm all conversational while you're piled on me and whatnot," proving that he is the baddest of all the bad-asses in Badass Town. Oh yeah, and he might have set a bomb to go off. This might come up later in the story: 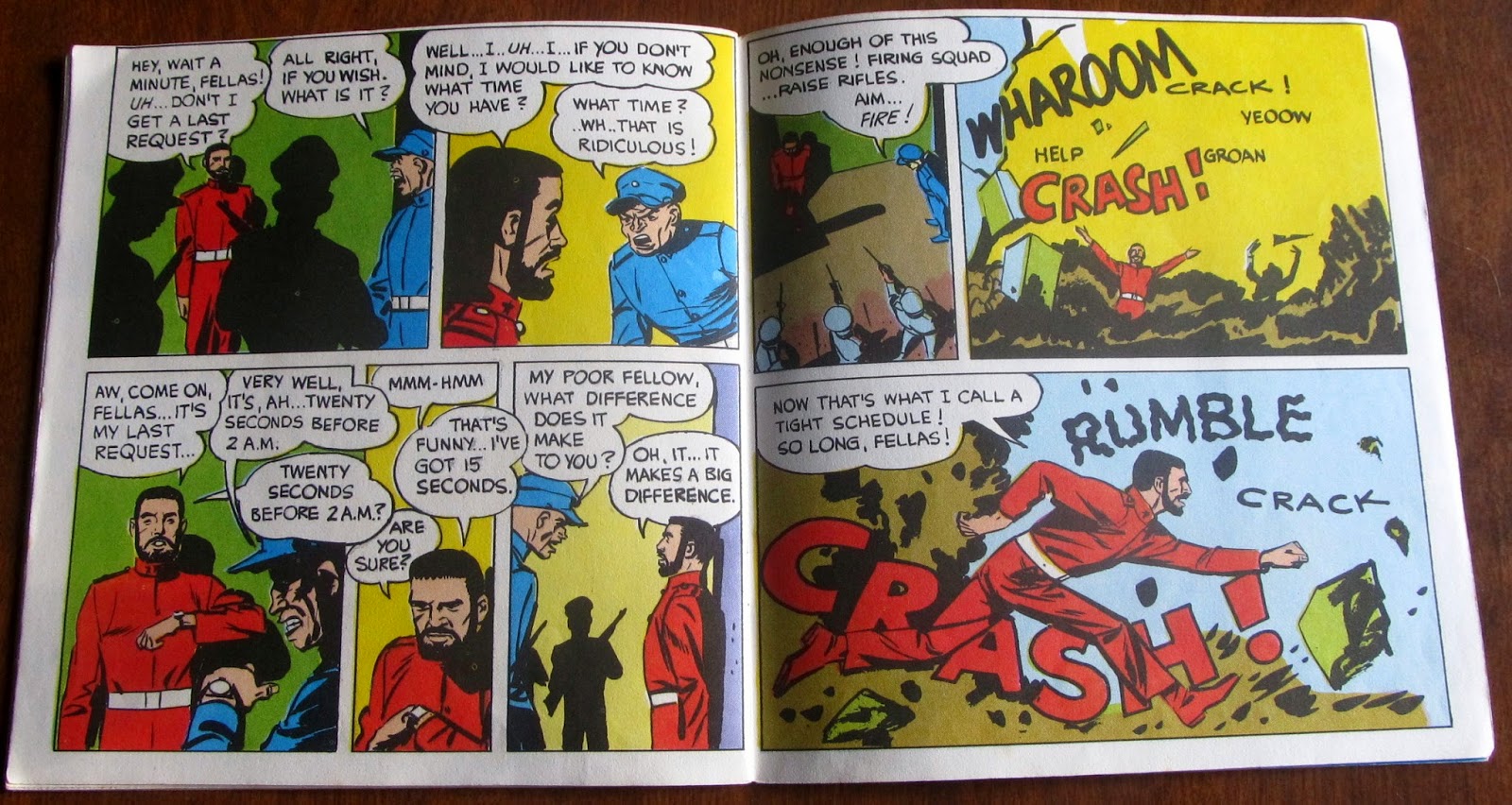 Apparently all the bad-guys are stone-cold and instantaneously vaporized in the blast that Joe just sort of... runs away from. I like the part where Joe asks the guy what time it is, and he tells him down to the exact second. Because that's normal under usual circumstances, let alone when you're directing a firing squad. 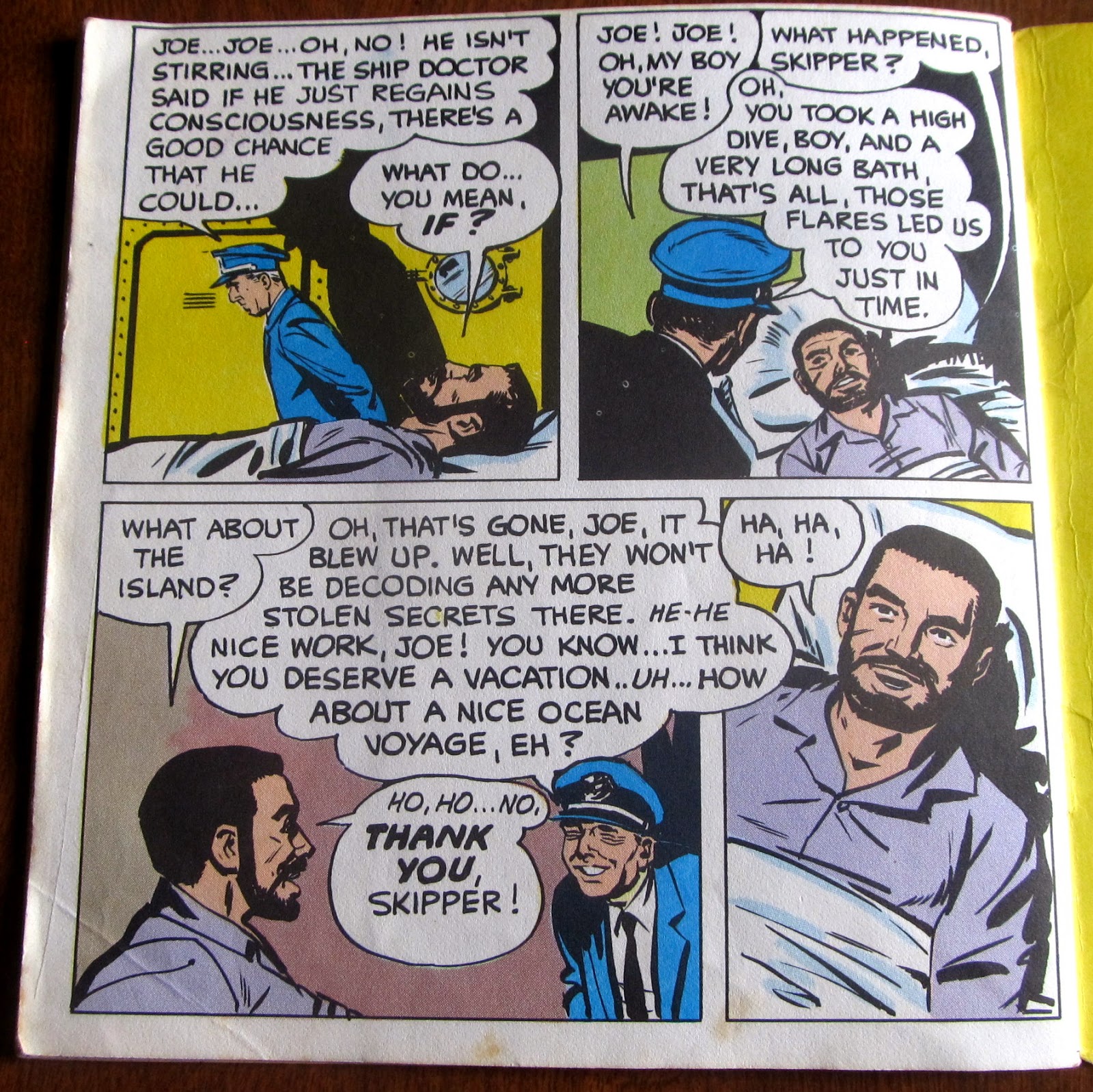 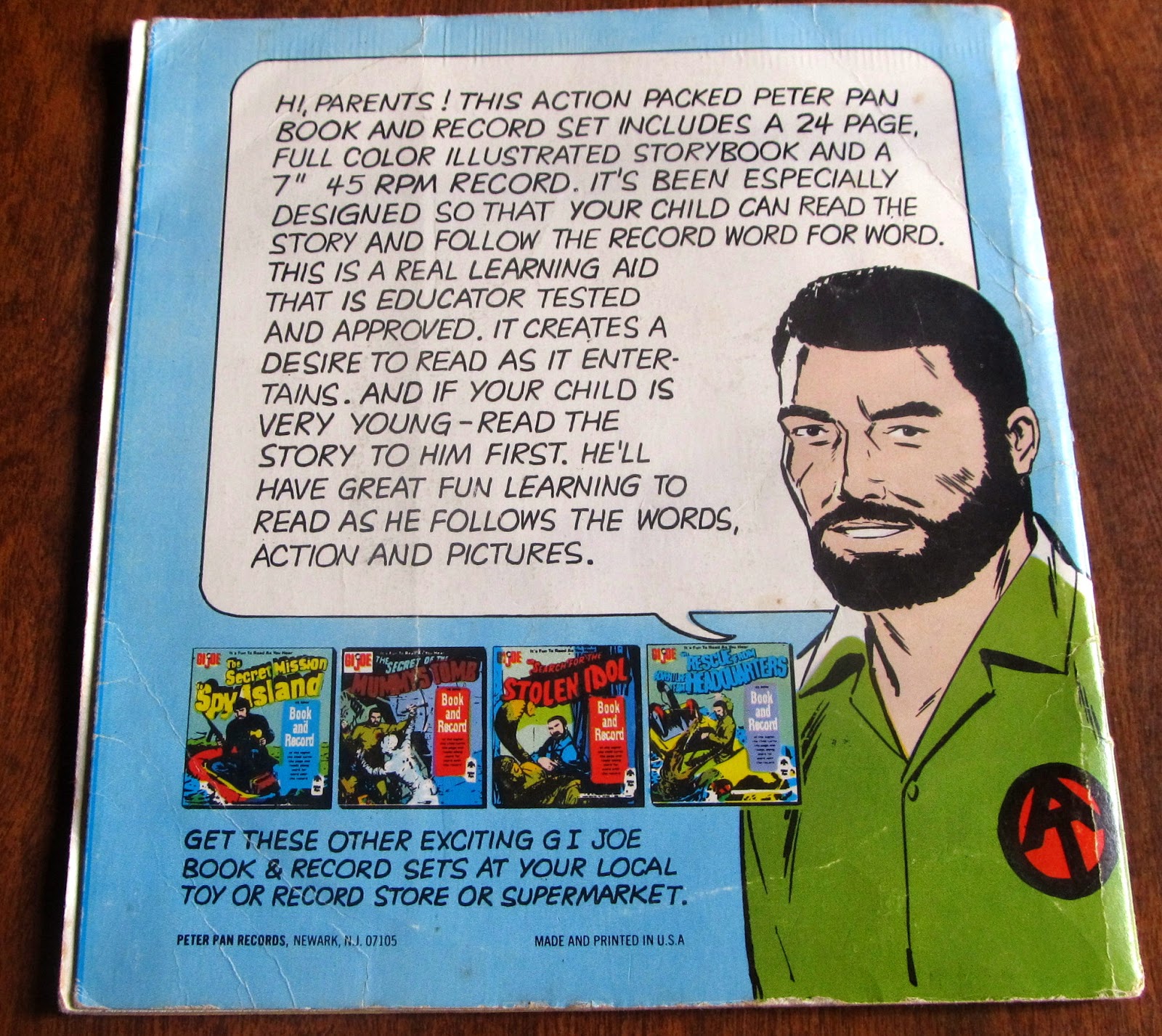 And here's a shot of the back cover. I would have LOVED to have found a copy of "The Secret of the Mummy's Tomb" or "The Search for the Stolen Idol" they look incredible! I love that back in 1973 you could have educational children's literature with this much death and destruction. 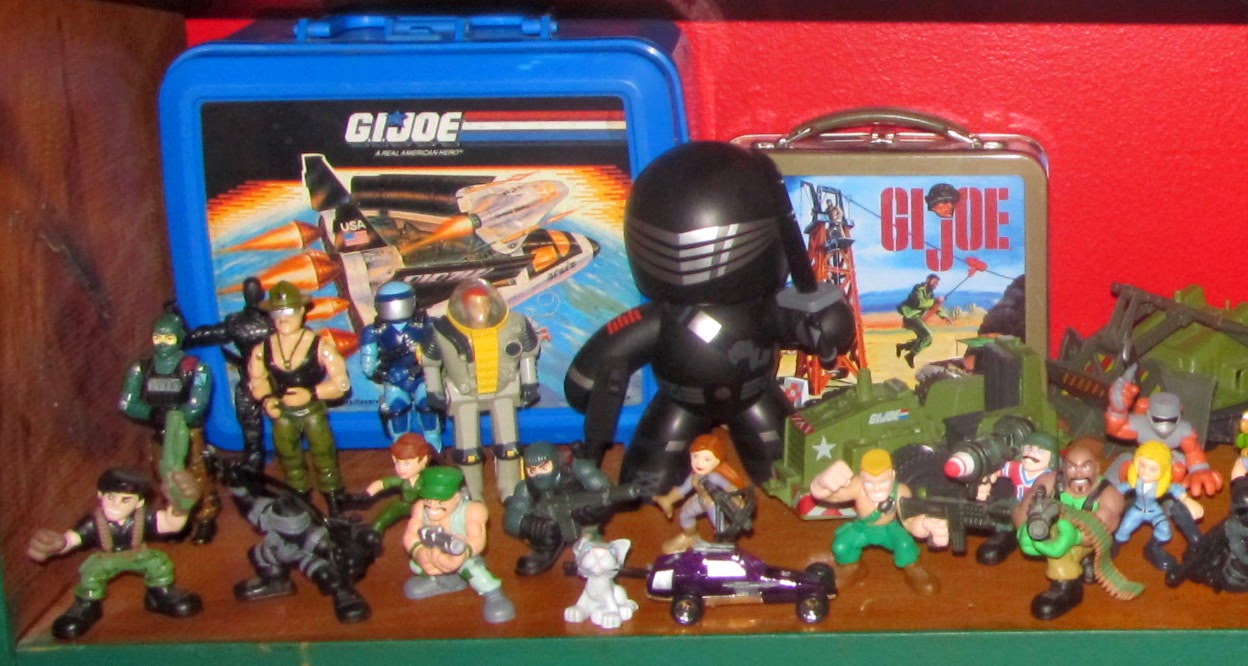 To wrap up I thought I'd take a couple shots of my GI Joe Shelf, this is the first half which houses the handful of vintage action figures I have saved, a Snake-Eyes Mighty Mugg figure, a couple of lunch boxes, some vintage mini-vehicles, and the Joes-side of my Hasbro Combat Heroes collection, including my San Diego Comi-con exclusive Snake-Eyes, and only-available in Canada Gung-Ho and Lady Jaye. 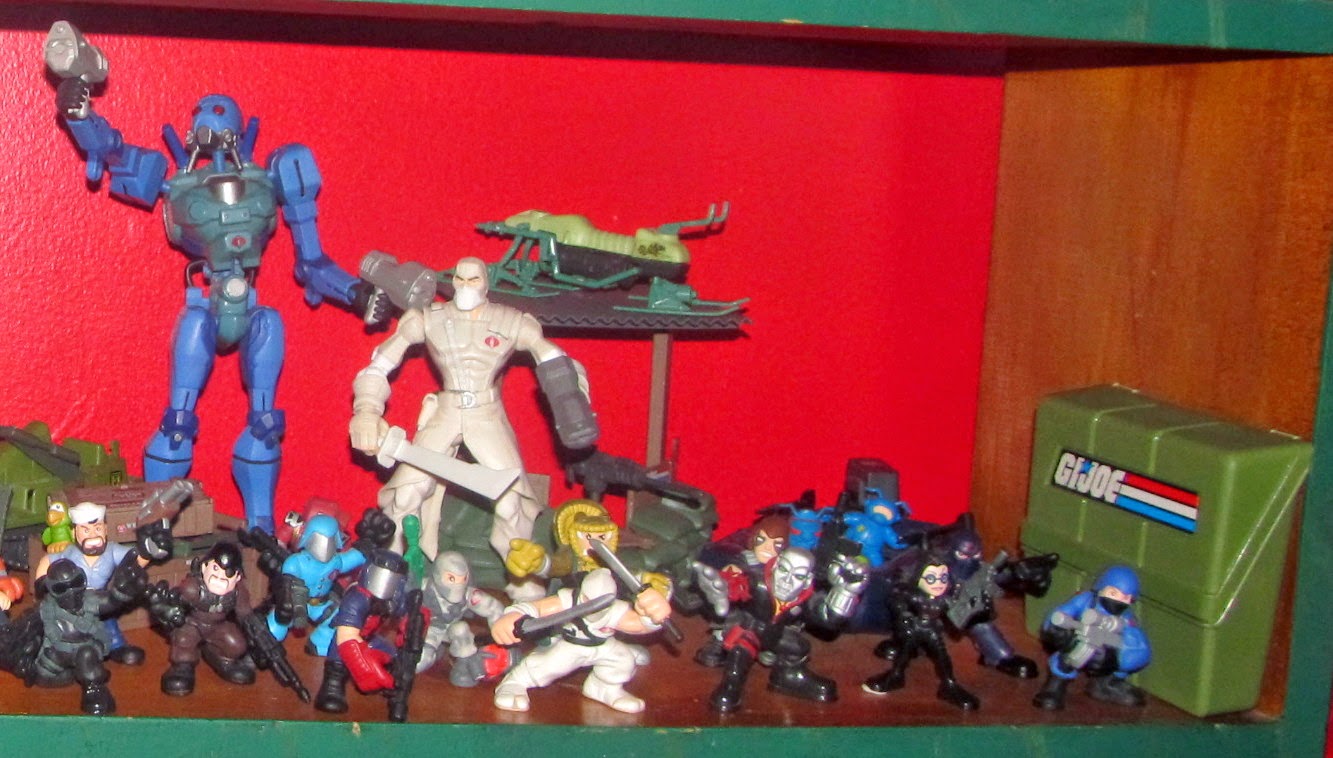 This end of the shelf houses my COBRA Sky-B.A.T. from the Sigma 6 line. He's all stripped down of wings and weapons but I don't mind. He reminds me a bit of Scud, the Disposable Assassin like this, and he's much less clunky. I can spend hours sitting there, putting him in various awesome poses. I also have a stylized, not-stupid-because-now-he's-good Storm-Shadow action figure who's about 4.5 inches tall and from a chunky line of figures released right after the first live-action movie came out. The Snake-Eyes figure I bought to face off against him is in storage because he's HORRIBLE looking. It's hard to see the Outpost Defender playset in the back there, but I LOVE it. It has Zartan's Chameleon Swamp Skier sitting on the roof, and the COBRA Night Landing raft sitting next to it (some blue Army Ants have commandeered the raft). There's the GI Joe Pocket Patrol Pack (carrying case) over on the far right. And again, another load of Hasbro Combat Heroes, this time, mostly Cobra, but also two more of the Canadian-released Joes (Snake-Eyes and Shipwreck over there on the far left, along with Canadian Cobras Major Bludd, Crimson Guard, Cobra Viper, and Hooded Commander). 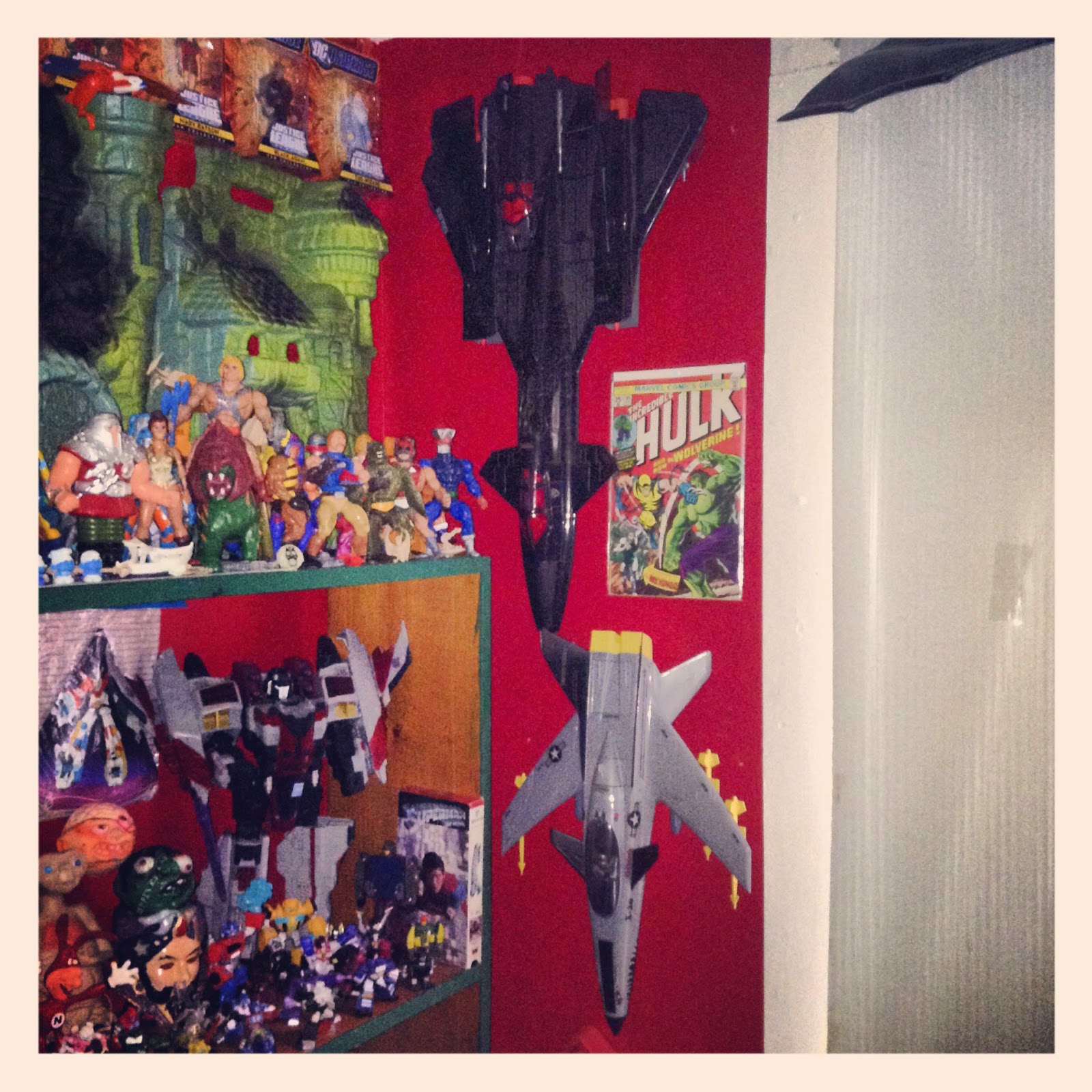 And finally, I yoinked this picture off my instagram account (follow me! @thegoodwillgeek) of the Cobra Night Raven and the Joes Conquest X-30, both of which I lusted after MADLY as a kid. About 3-4 years ago I bought a giant box of GIJoe toys from a local guy for thirty bucks. Both of these jets were in it, along with all of the vintage vehicles I showed in the picture above. The Killer Whale was in there, the Moray Hydrofoil, and the giant Headquarters playset was included too. Almost none of the vehicles were complete, but I don't mind. Most of them are still in storage in my in-laws basement, but the pieces I love the most are right here on display.

HOO-BOY!!! So that's it. Hope you enjoyed this exhaustive look at three old GI Joe books (I also have some of the CYOA Joe books too, but I'll spare you this time around) and my small Joes collection! G.I. Joes were one of those lines that I had a TON of as a kid, but I was never super attached to many of them except for a handful. Snake-Eyes was my absolute favorite, but Lifeline, Low-Light, Firefly, Jinx, Sgt. Slaughter, and Beachhead were all personal favorites as well. Like all my other toys they tended to develop mutant powers and fight the legions of Hordak... except Snake-Eyes. He was a ninja, and didn't need any stinkin' powers.

Let's see what the rest of the League is shouting "Yo Joe!" about:

- Branded in the 80s' Shawn Robare got his Real American Heroes inspiration from... Canada!

- Jathniel.com first serenades us and then shows off some of his toy photography! Joes and Star Wars collide!

That's all I got for now kids! Hope you liked it! I'll be back soon with more Geeky Goodwill Goodies! Until then, Happy Hunting!
Posted by Derek Ash at 2:49 PM