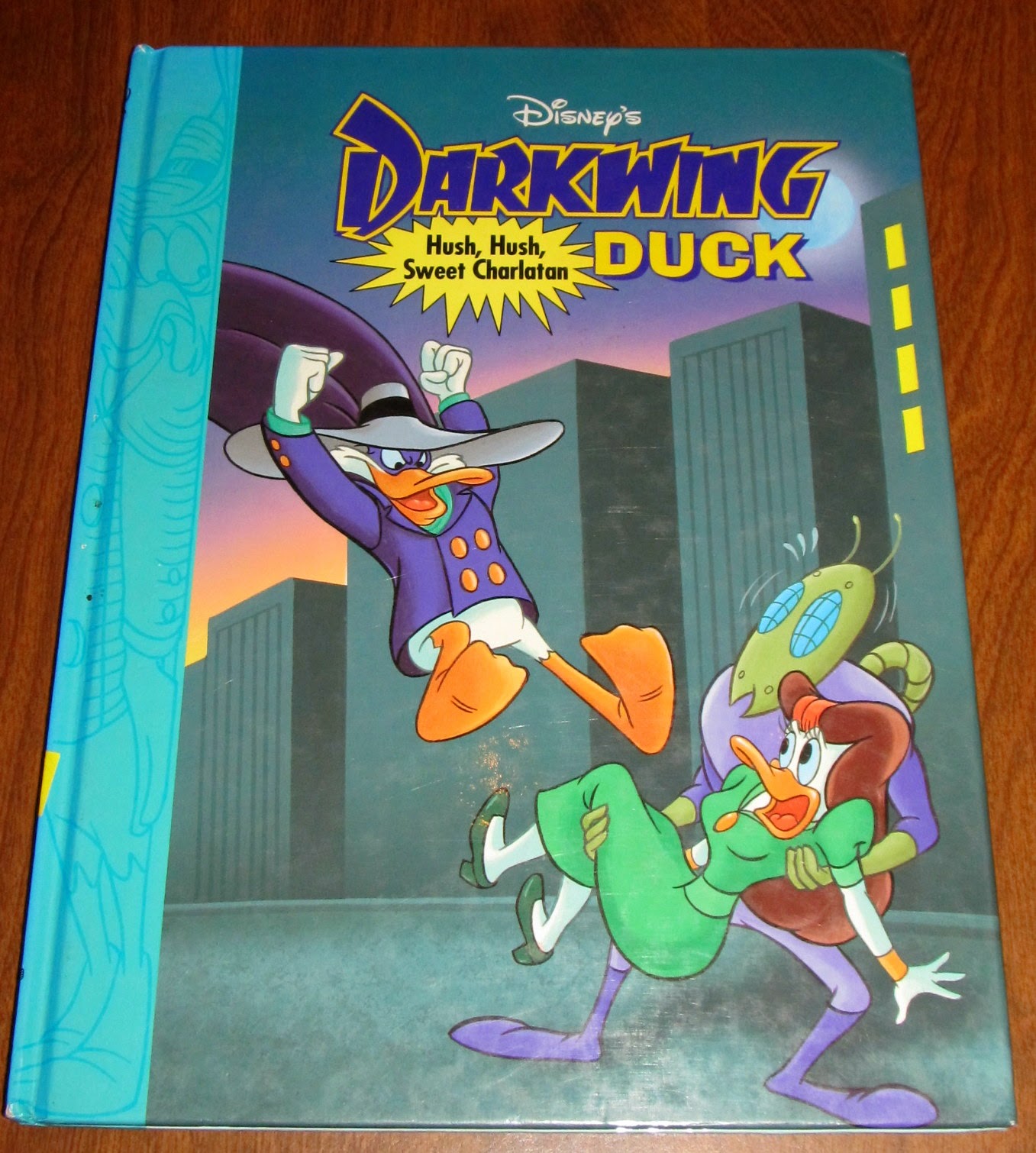 First up, a couple of Darkwing Duck Books! The first one I was kind of disappointed to find featured Tuskernini as the villain, who I never really got behind as a D.D. villain in the first place. They always played him as a weird mix between The Penguin and Mysterio... but a walrus movie director supervillain just feels kind of sad. 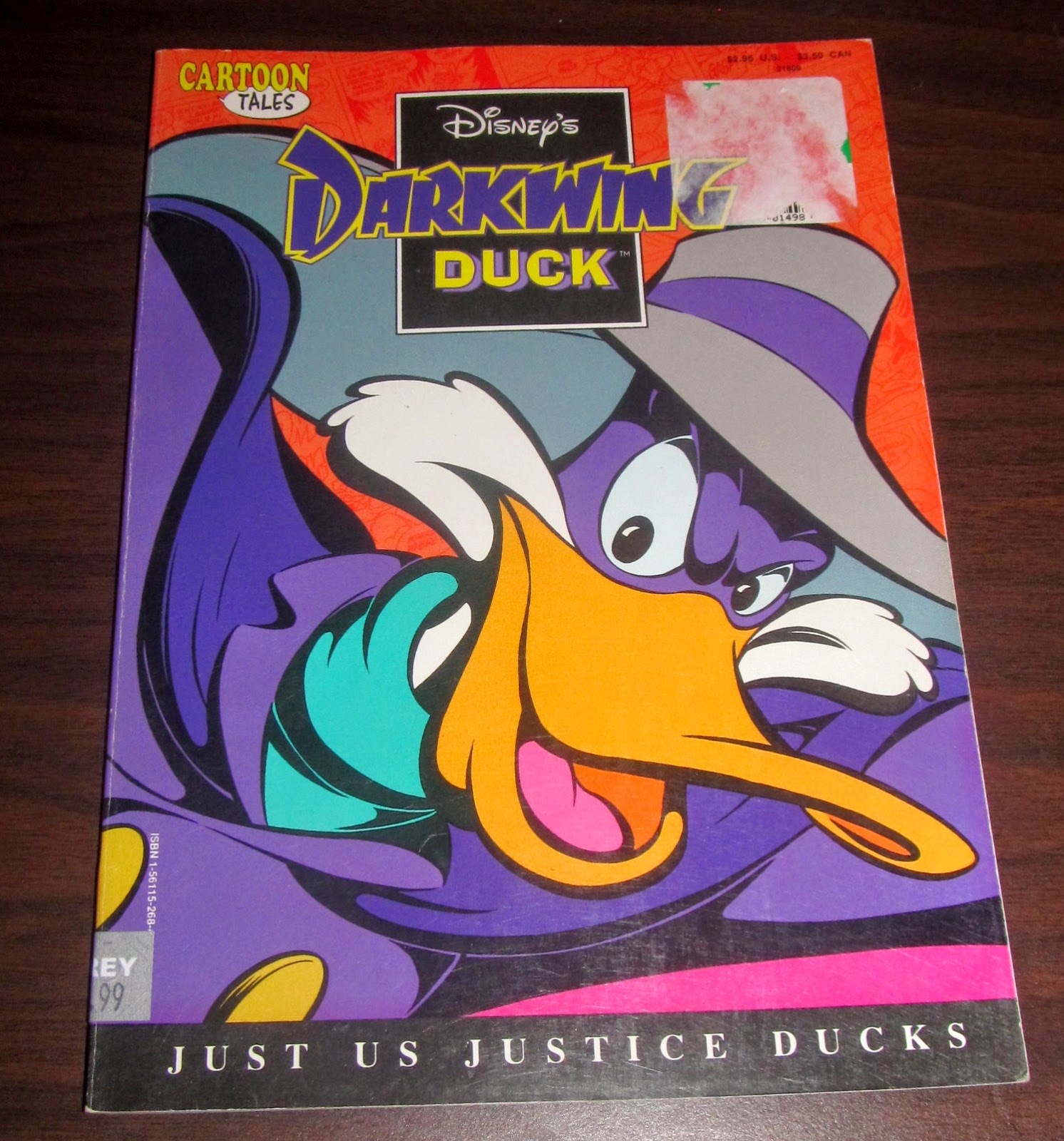 Next up we have this copy of Darkwing Duck: Just Us Justice Ducks which is an adaptation of the tv show. This is the story where the heroes that Darkwing has met throughout the series all come to help him defeat a team-up of his most dangerous foes. The adaptation is a little sloppy, and is definitely aimed at kids, not "all audiences". It feels rushed, and the panels are crowded together to fly through the story as quickly as possible. It's a shame too, because they could have done a great deal more with what they had for material. For instance, there are no splash pages that show the villains all together. The best we get is pretty much just this:

Always loved those episodes of D.D. because it gave the show the same shared universe feel of the comics it was parodying, and you got the goofy, anthropomorphic version of the Avengers or JLA, but Darkwing style. Gizmoduck from Duck Tales makes another guest appearance here, and we get returning heroes like Stegmutt the dinosaur, Neptuna the fish woman, and Morgana the sorceress. But of course, this kind of story is all about the villains. I really loved the villains in the roster of the Fearsome Five: the plant controlling Dr. Bushroot, the electrifying Megavolt, Darkwing's evil twin from the negative universe, Negaduck, the watery salesman Liquidator, and the Mad Jester of crime, Quackerjack! This was a neat find, but honestly if you're a Darkwing Duck fan, I recommend just sitting down with the DVDs and watching the two-parter instead of trying to track this graphic novel down. 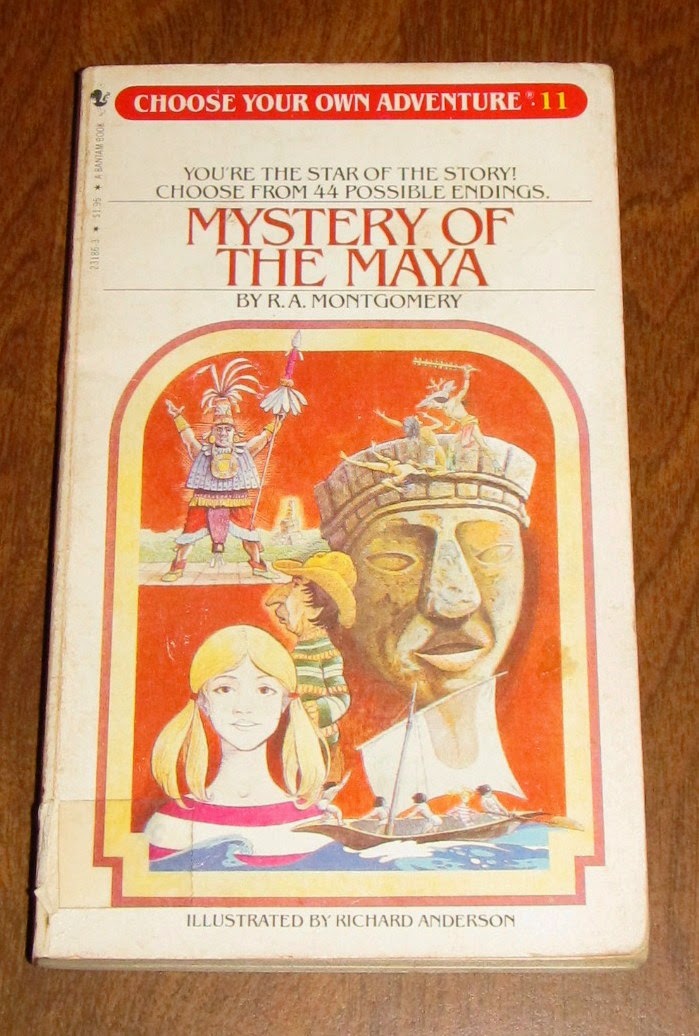 Next up we have this Choose Your Own Adventure book: Mystery of the Maya. I haven't had a chance to play through this one at all yet, but it looks like some good old-fashioned Tomb Raider/Indiana Jones style adventuring, except with kids. Long-time readers will remember that I am a CYOA NUTJOB and I collect just about any of them I find. 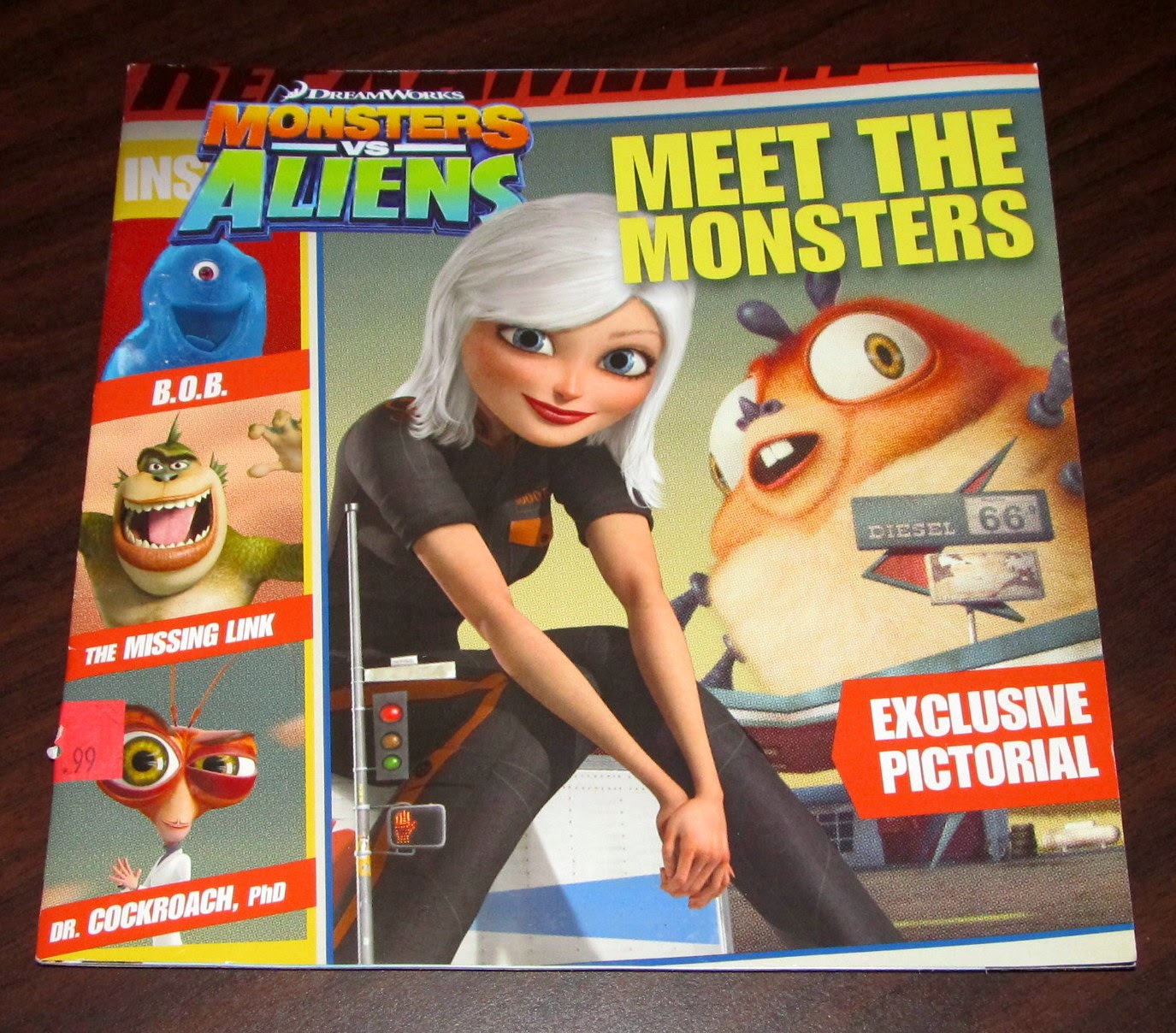 I'm also a pretty big fan of Monsters Vs. Aliens (The movie and the Halloween Special, not the abysmal TV show on Nickelodeon). I am also a huge fan of the wonky old Weekly World News-style craziness that used to be available in the grocery store checkout lanes. So when I flipped through this book and found that they were telling the story in that format: 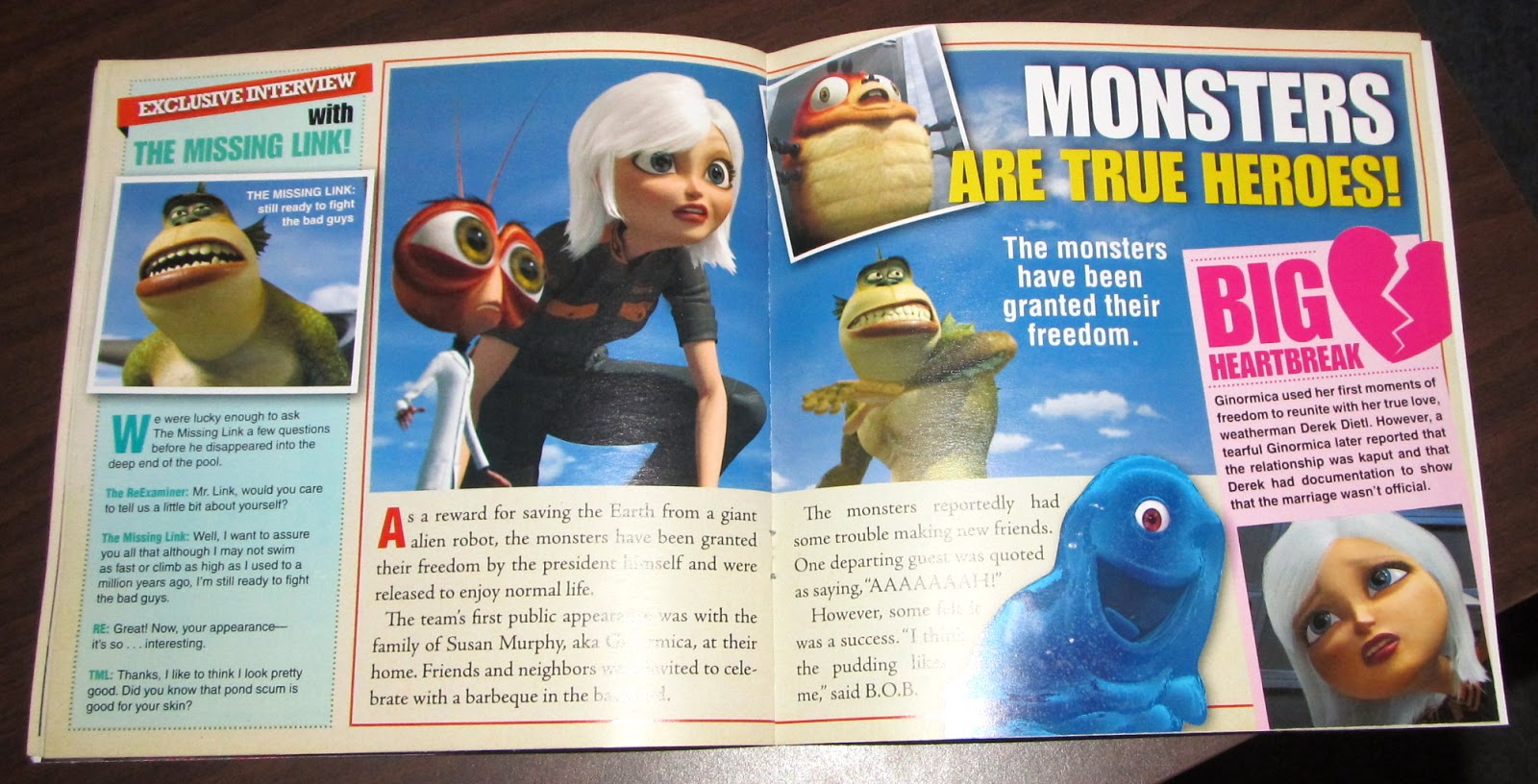 I had to pick it up. I honestly don't even know if this book would interest ANYONE other than me... the subject matter is a bit young for most kids who are capable of this sort of reading level... and it's too densely packed for an kind of bedtime-story read aloud... so I'm thinking they were marketing this book (and in most cases the movie) to me and me alone. 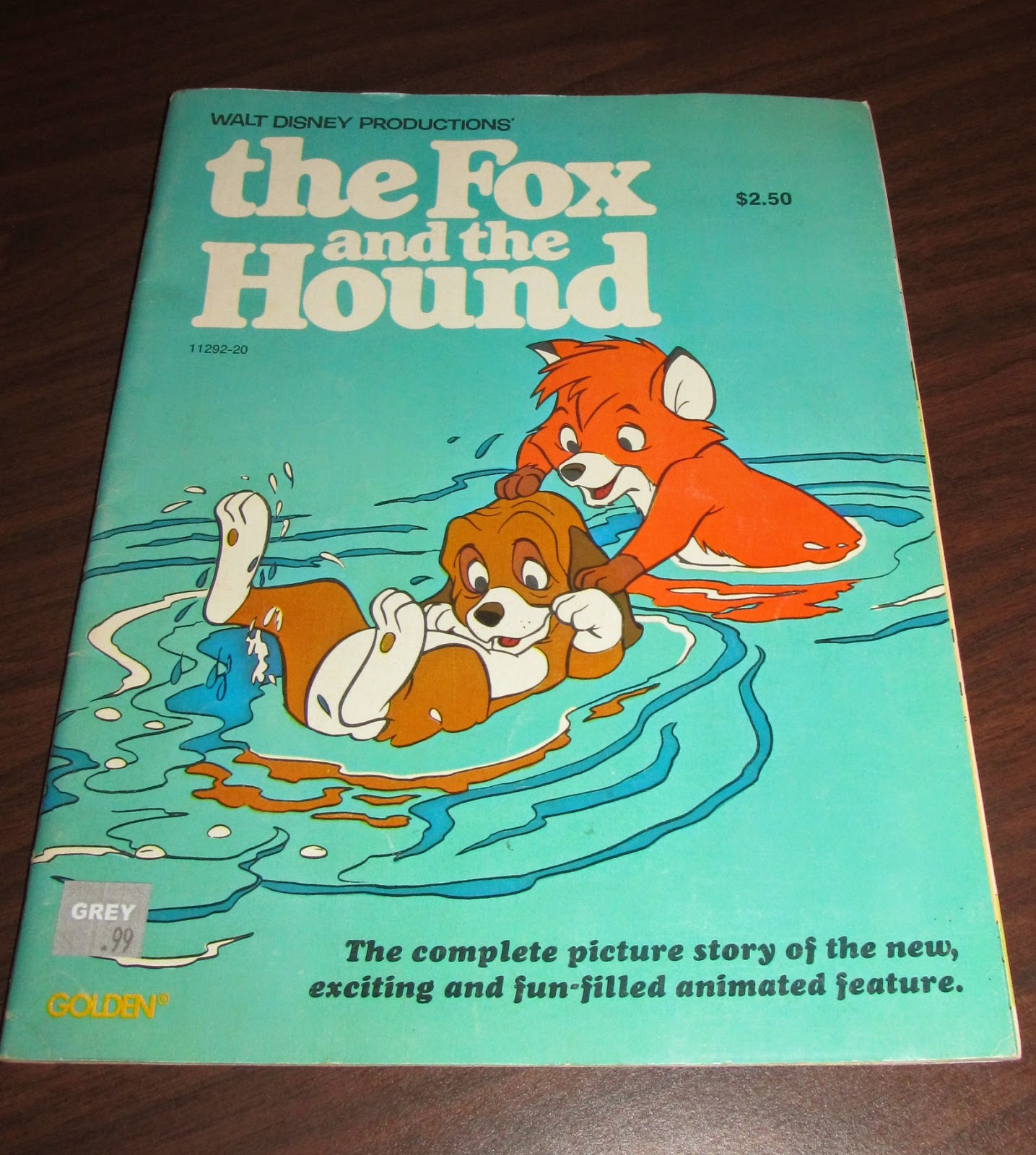 It's funny how often Disney and Golden Books put out these "picture stories" of their properties, which were really just comic book adaptations. I'm a sucker for the Fox and the Hound, so when I saw this I had to pick it up. Here's a little sample of the interior: 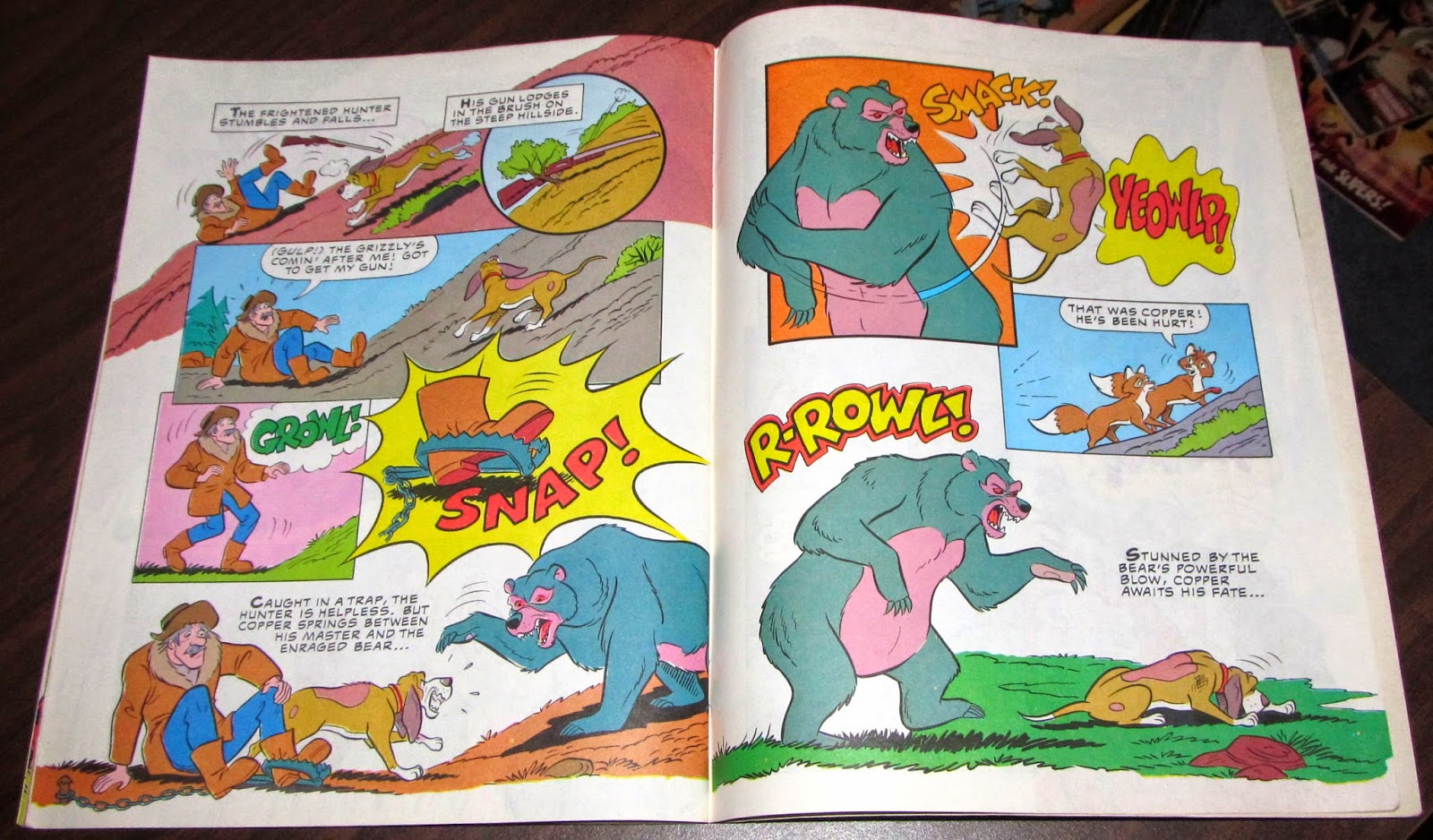 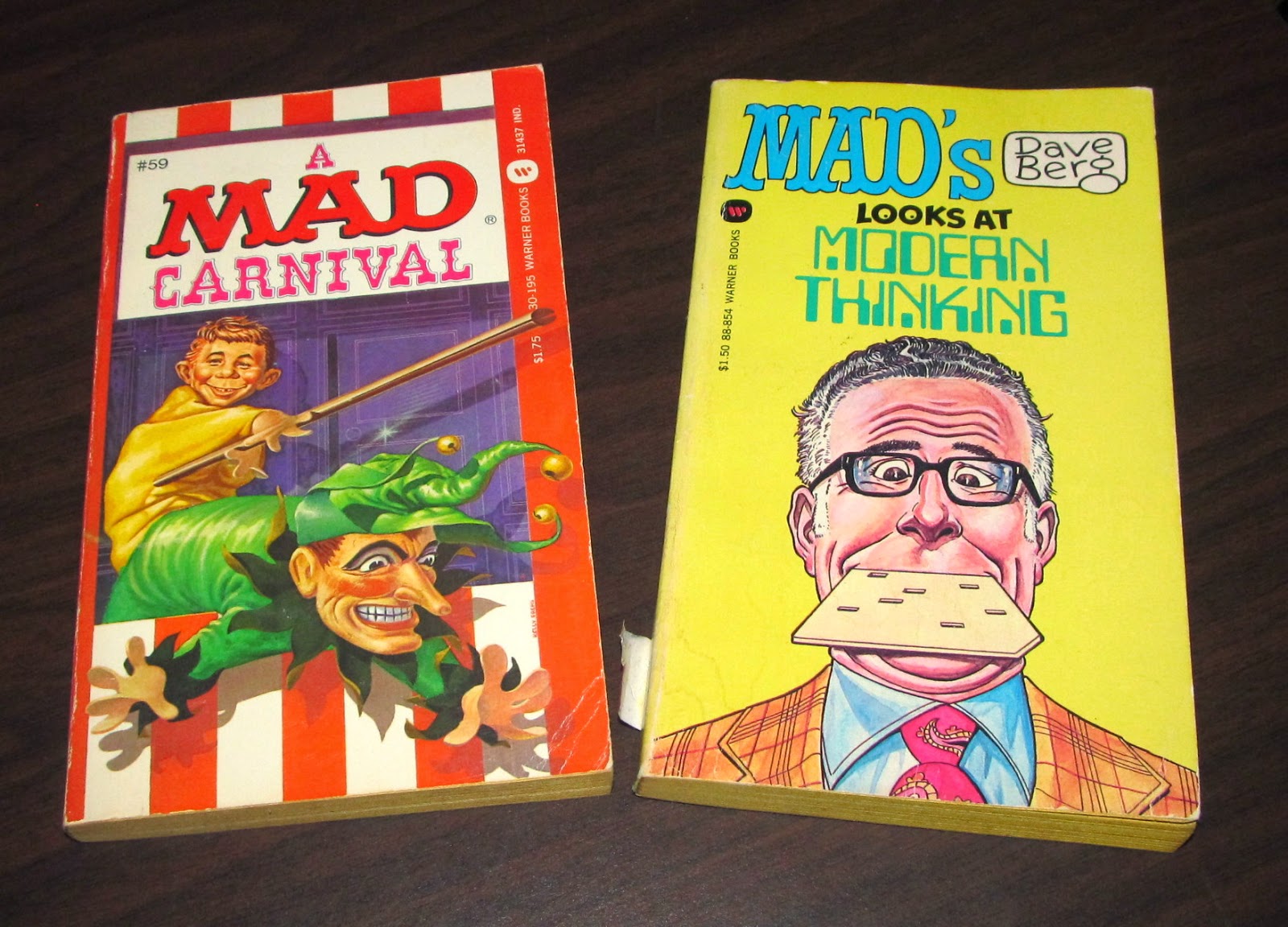 A couple of MAD magazine comic cartoon compilations from the 70s and 80s. I was really excited to find these, as browsing through MAD magazine was another grocery store pastime from my youth. 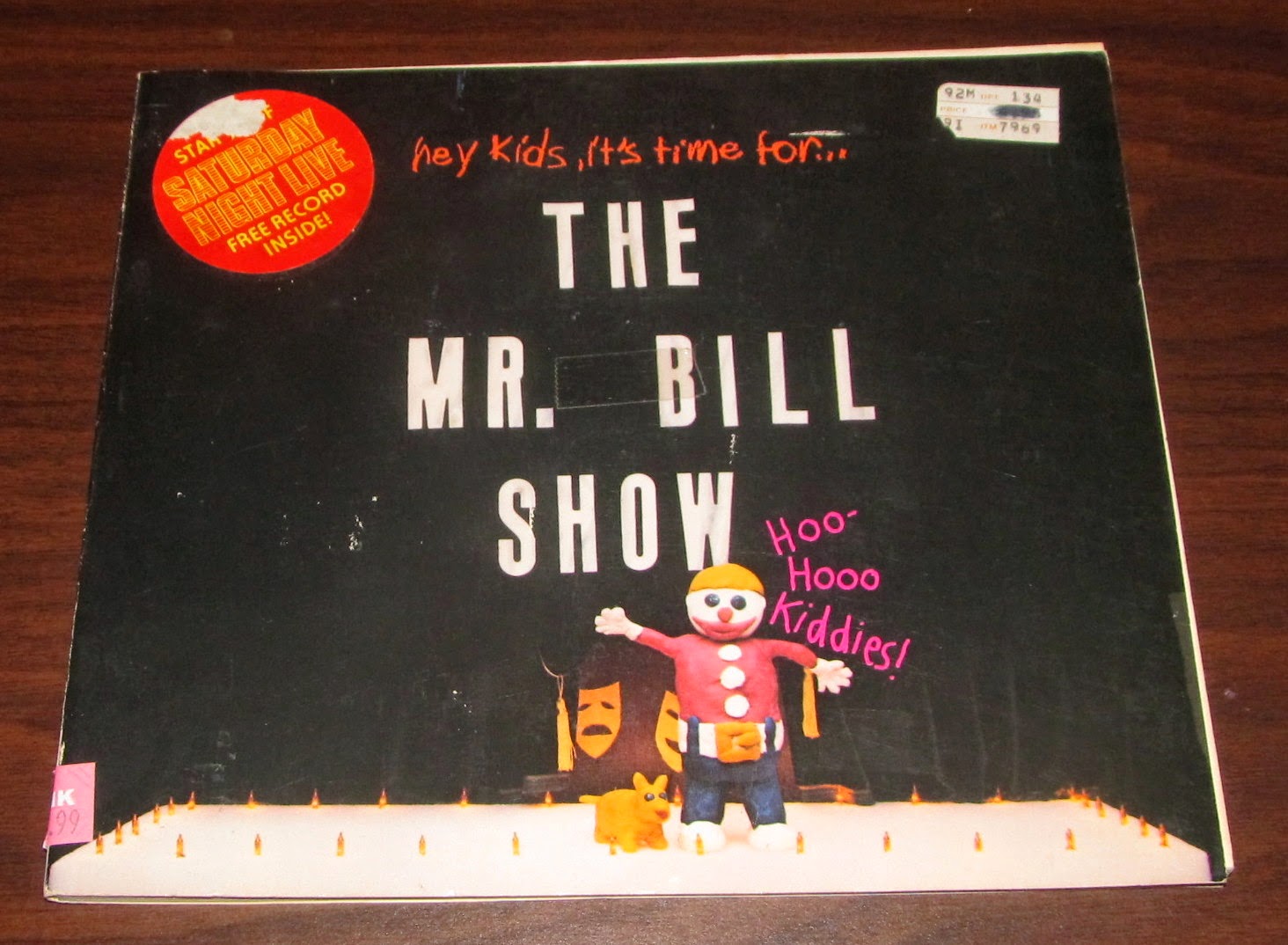 The Mr. Bill Show book! I always found the Mr. Bill segments on the old SNL episodes to be hilarious when I was a kid. They seemed like a really demented version of Gumbi, which was another love of mine back then. Flipping through this book is much the same as watching the shorts on SNL as Sluggo and Mr. Hands torture, maim, disfigure, dismember, and emotionally scar Mr. Bill in some new way on almost every page. 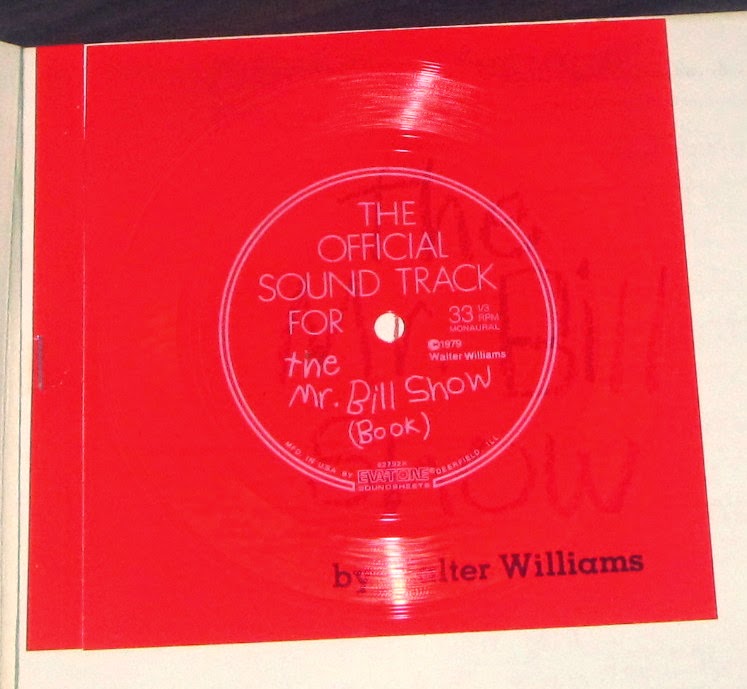 This one even still has the free soundtrack record included! It's been removed from the perforation and was actually tucked into the middle of the book when I bought it. 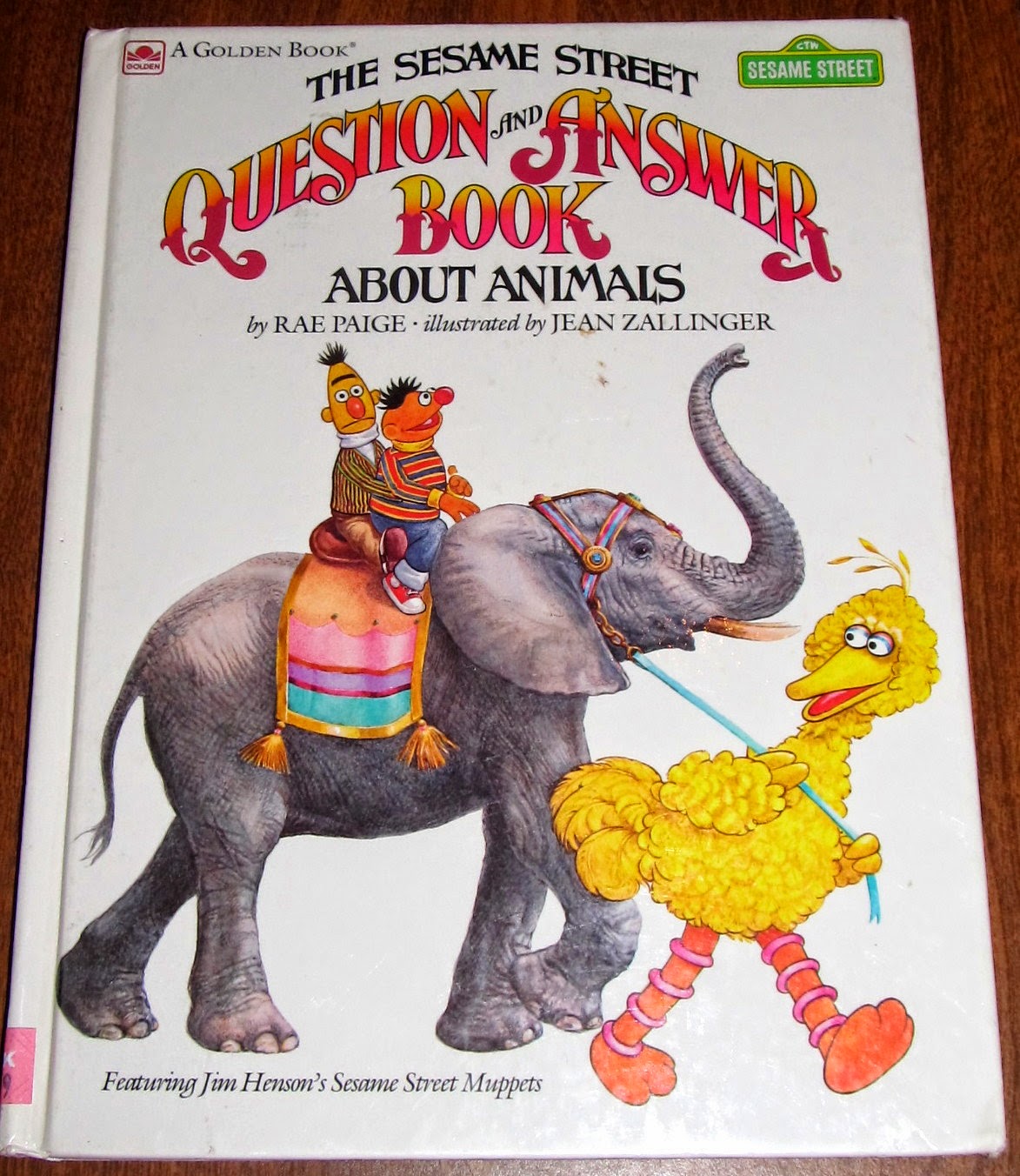 Frequent visitors to this blog will also be able attest to the fact that I am a Sesame Street person as well. I collect just about anything pre-90's (and some stuff beyond that... but it has to be really special). I'm certain I either owned this book as a child or I obsessed over it in my school library because the illustrations are sooo familiar. This book really stands out for having a picture of the 2-Headed monster from the wait down: 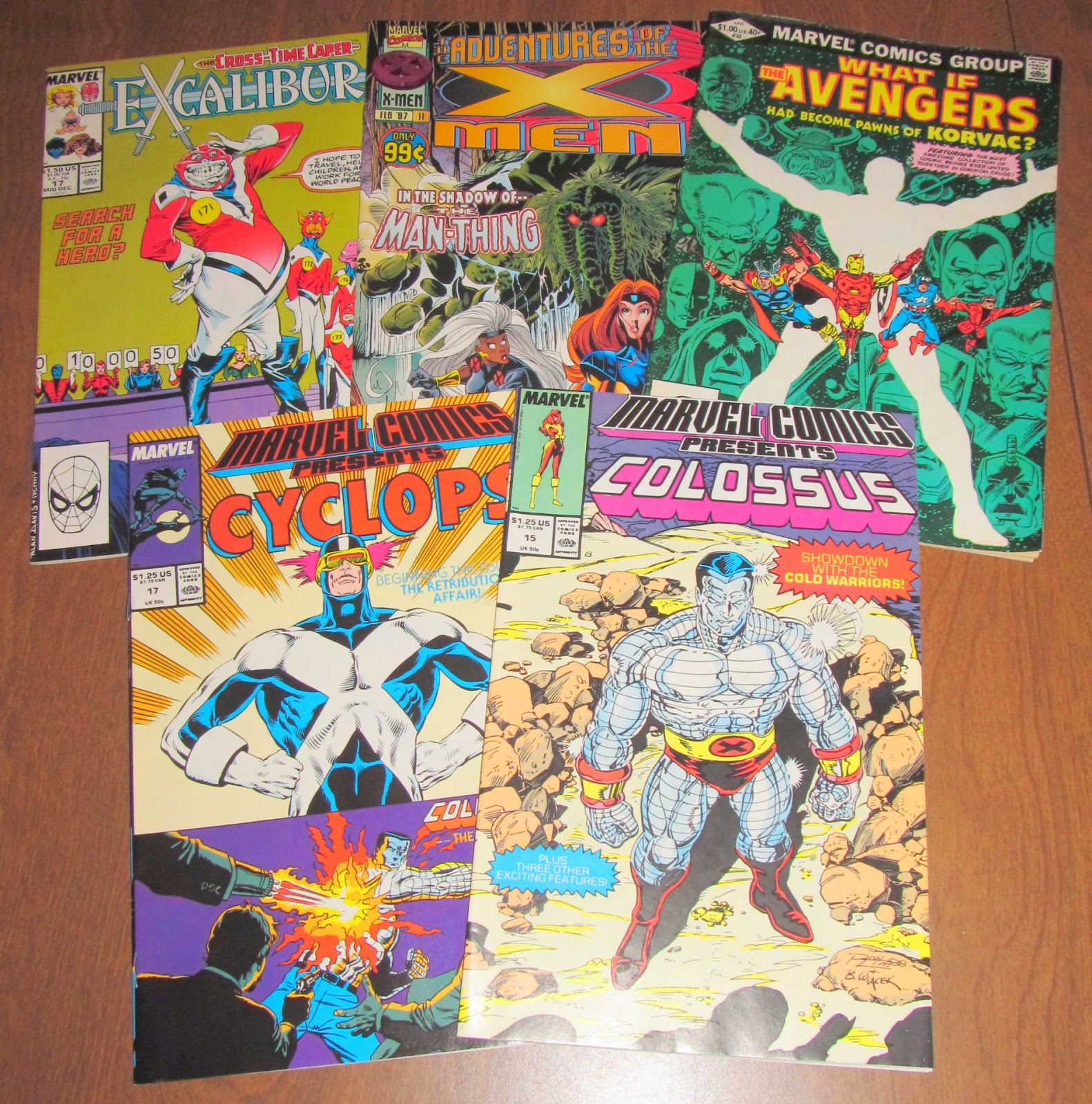 Here is a pile of random comics I picked up, the most notable of the two being the Marvel Comics Presents issues. This comic often told seriously long-haul serialized stories, such as the Colossus story you see featured here, which was a 13-parter (!). There was also a Black Panther story that ran on for 25 instalments!!! I sort of made it a personal goal to collect the rest of the Colossus story at some point, so finding these two issues was pretty cool. The Adventures of the X-Men .99 cent issue is pretty awful, but it features the Man-Thing... so I wanted it. I found another issue of Excalibur I didn't yet have, a part of the excellent "Cross Time Caper" back when comic books were still able to tell their own stories and go crazy places and not have to kowtow to the upcoming Summer crossover event. And I never don't buy What-If? if I find it cheap. And neither should you... not... not buy it? I don't know how write. 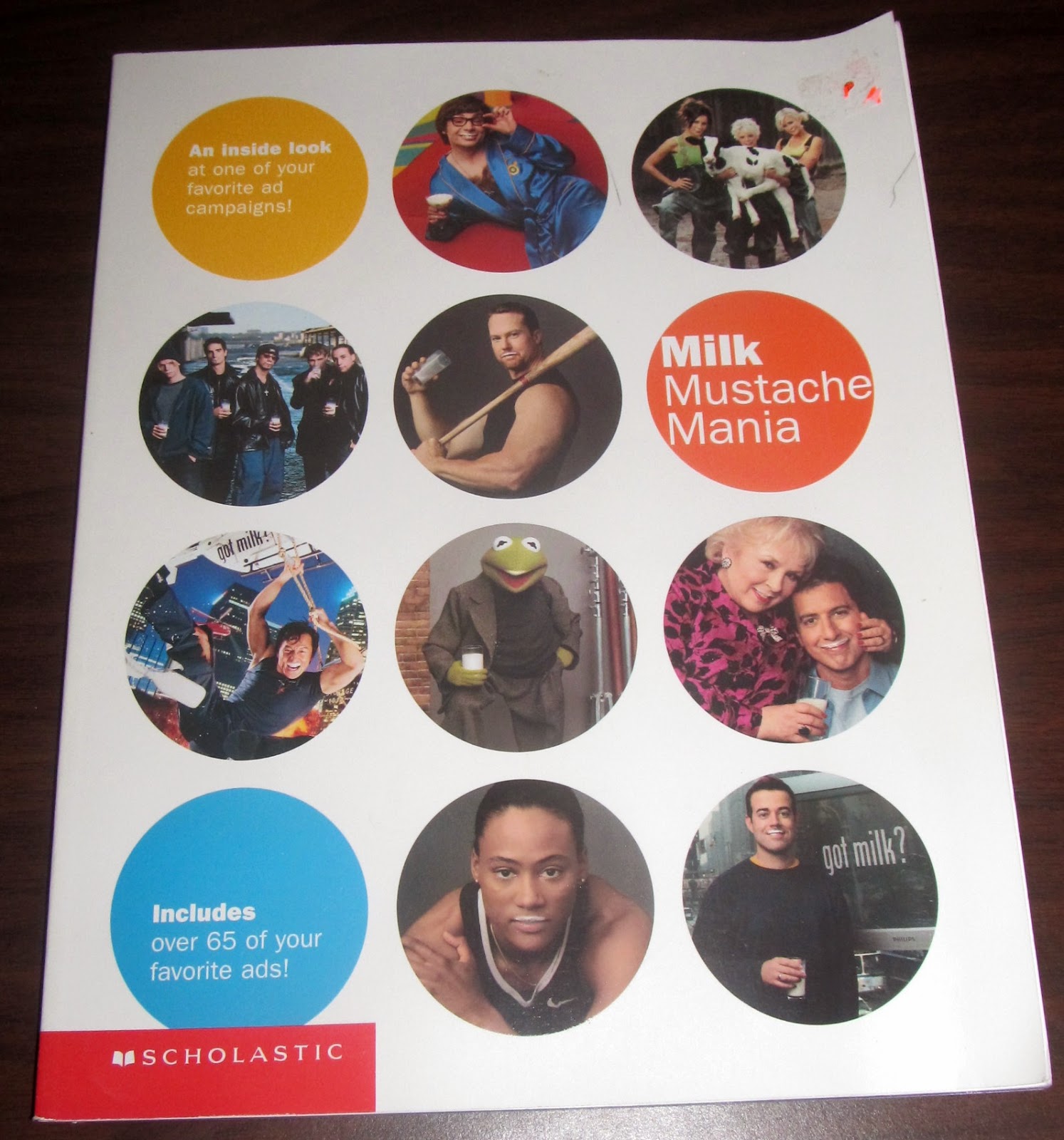 I am a HUGE fan of advertising mascots and campaigns, and the "Got Milk?" campaign with its milk mustaches is one of the most famous and ubiquitous ad ideas of the past few years. So when I found this book detailing the history of the Go Milk ads with a bunch of the ads collected together in one book? I was pretty excited. The book is broken up into categories, such as athletes, cartoon characters, and musicians who have all participated in the campaign. Really enjoy flipping through the book Below are shots of some of my favorites: 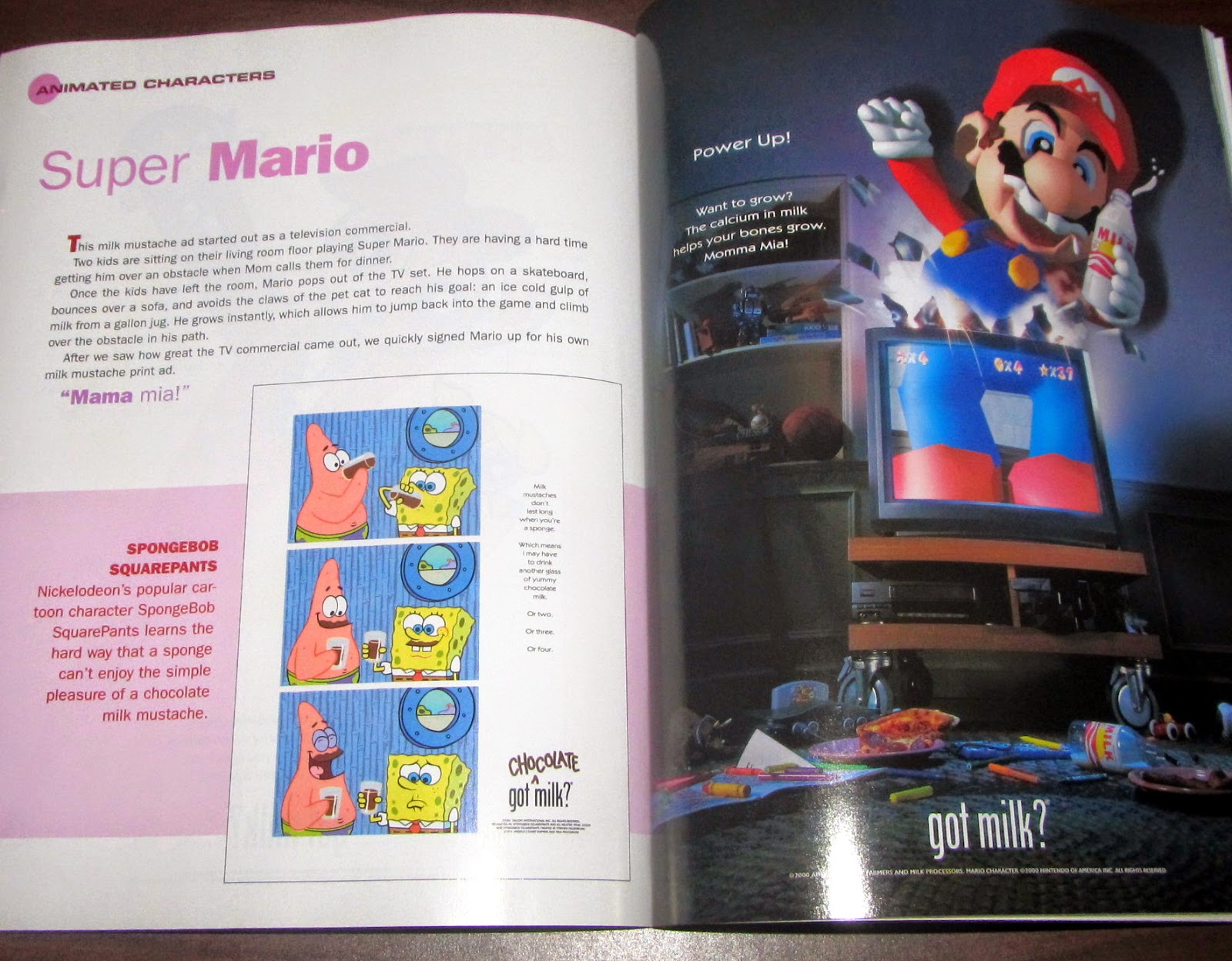 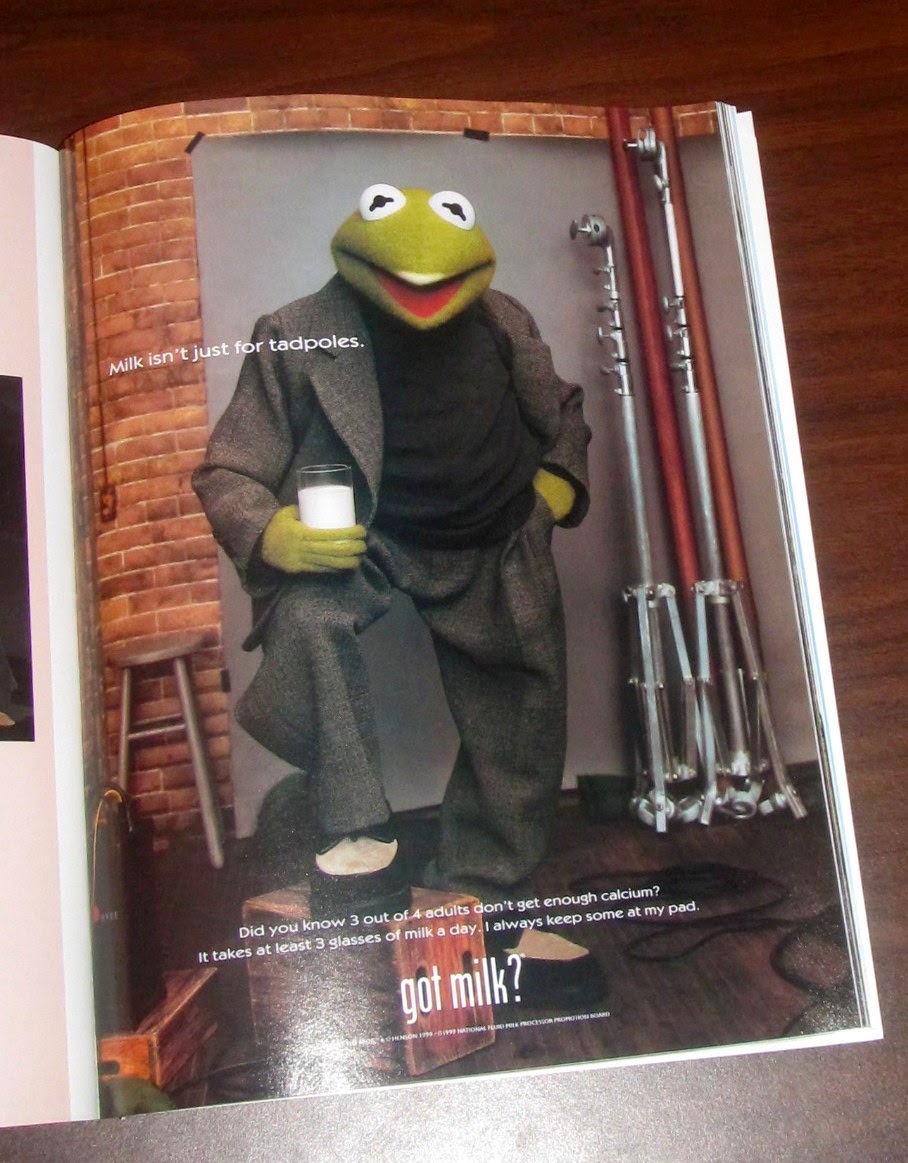 Spongebob, Mario, and Kermit have all worn milk mustaches. 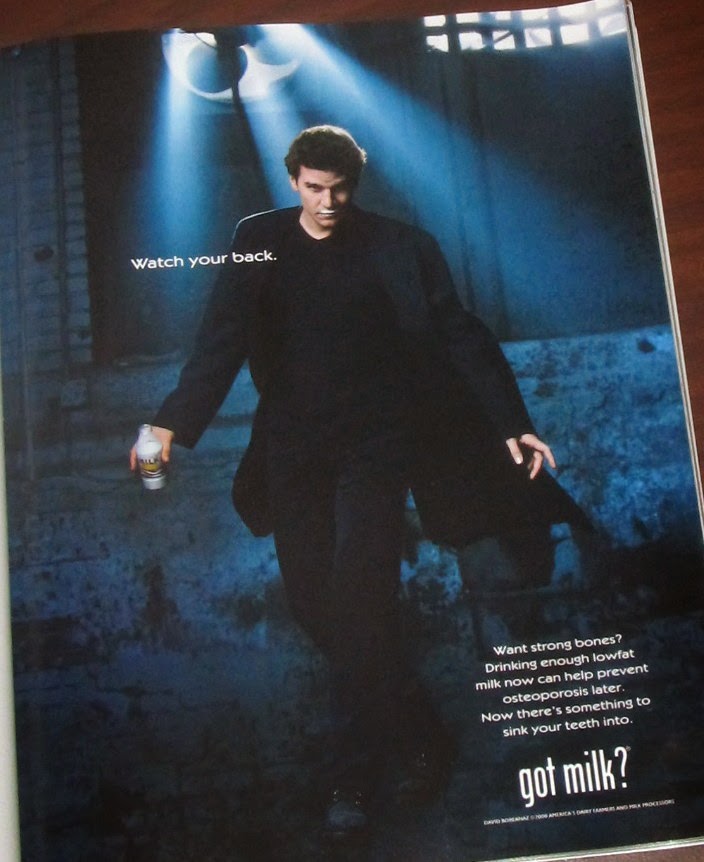 Crimefighters in the night, Batman and Angel count themselves among the thankfully lactose-tolerant.

And guys who like greasepaint on their faces like their milk as well, as demonstrated by Ronald McDonald and the members of KISS. 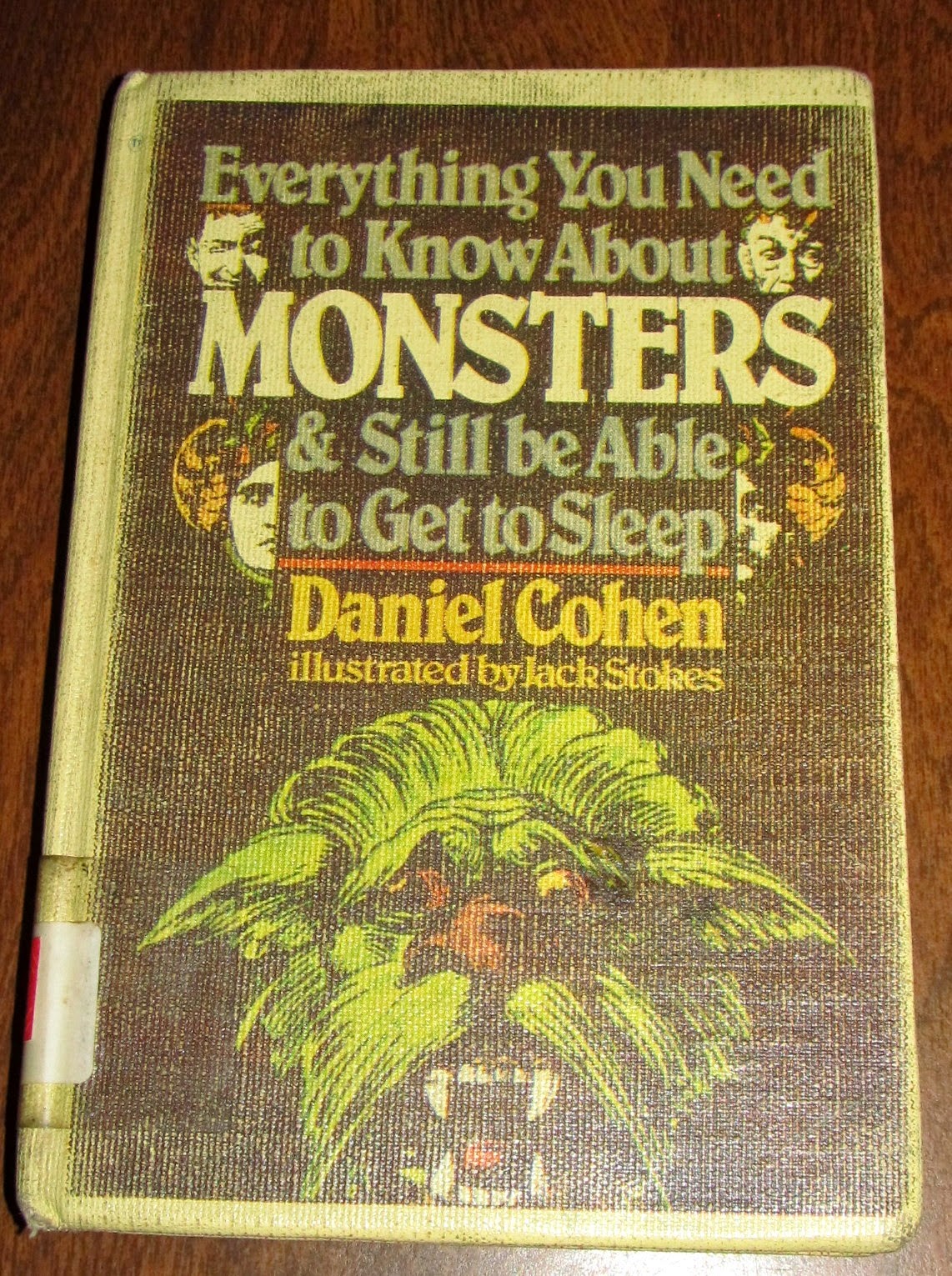 Finally, the last book of this post is the one I was the most personally excited about. Because I used to read this book obsessively as a kid. Everything You Need to Know About Monsters and Still Be Able to Get to Sleep by Daniel Cohen. I used to check this book out from the library (in the town of Bar Harbor when I lived there for a couple of years as a kid) on an almost weekly basis. I loved monsters as a kid and I especially loved werewolves. I would check this and a couple of other books out and pore over the pages lovingly over and over again. What is ESPECIALLY exciting about this particular book is the fact that it is the copy that came from that library. So I found a book at Goodwill that was the exact same copy I used to check out and obsess over as a kid. I now own that book. And it is a book about monsters. I mean... look at that guy on the cover! That mean green guy! He actually looks kind of worried.

Anyway, that's all I've got for tonight folks! I hope you found at least one of these books as interesting as I did. I'll be back with more Geeky Goodwill Goodies! Until then, Happy Hunting!
Posted by Derek Ash at 5:18 PM