Long overdue is my reporting on this wonderful piece of mail that I received... a package from my good friend Miss M over at Diary of a Dorkette!!! Miss M and I have both recently begun podcasting with Geek Fallout, which is a part of the Atomic Geeks Network. SO I get to talk to her a lot more now and she never fails to impress! We've also been package-pals (not as dirty as it sounds) for a while now, sending boxes back and forth filled with lots of awesome goodies we think the other may enjoy. So I was pretty ecstatic when this showed up: 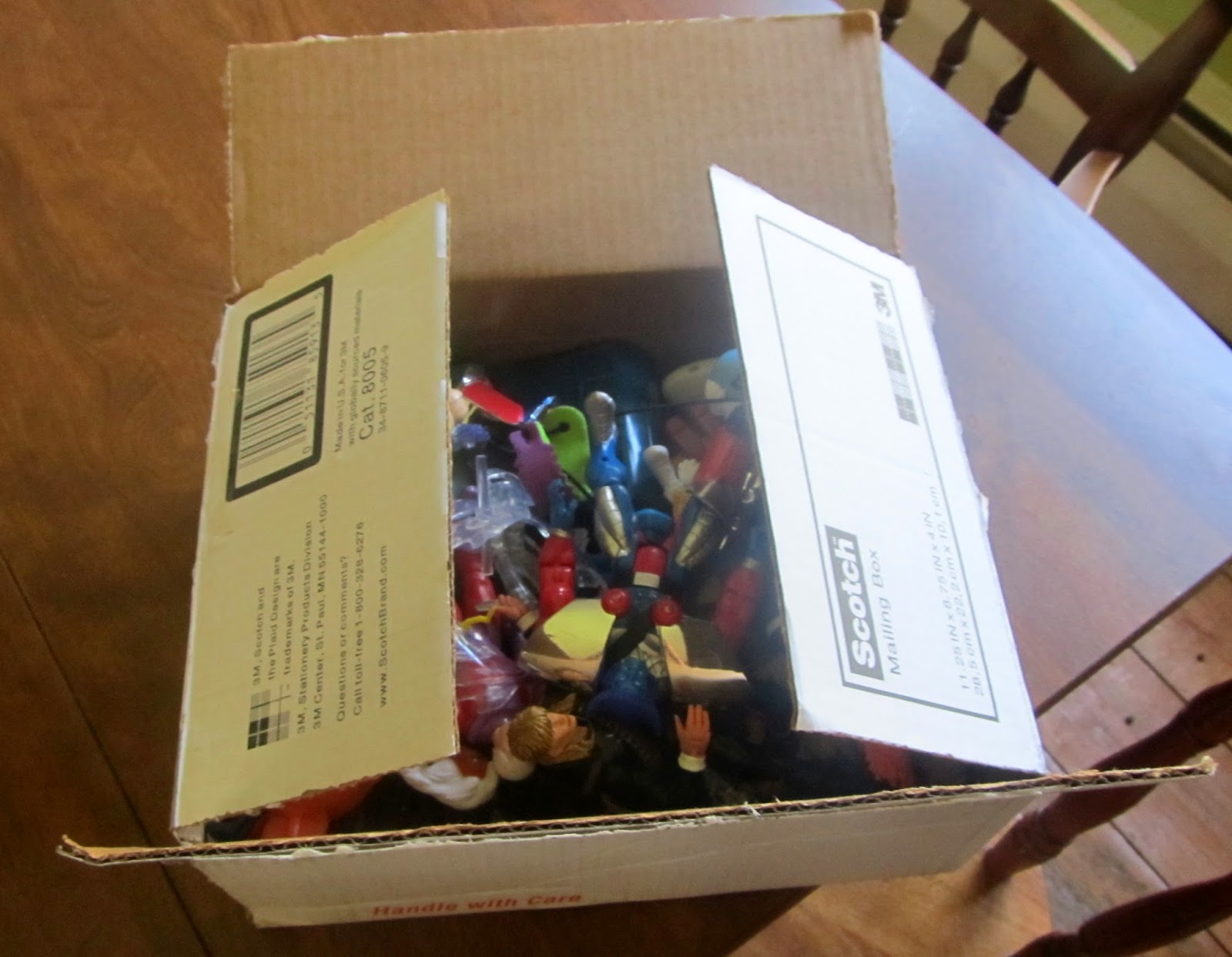 Be careful. This box may melt your face off Arc-of-the-Covenant-Style. But let's throw on our sunglasses and check out what she sent me anyway... 'kay? 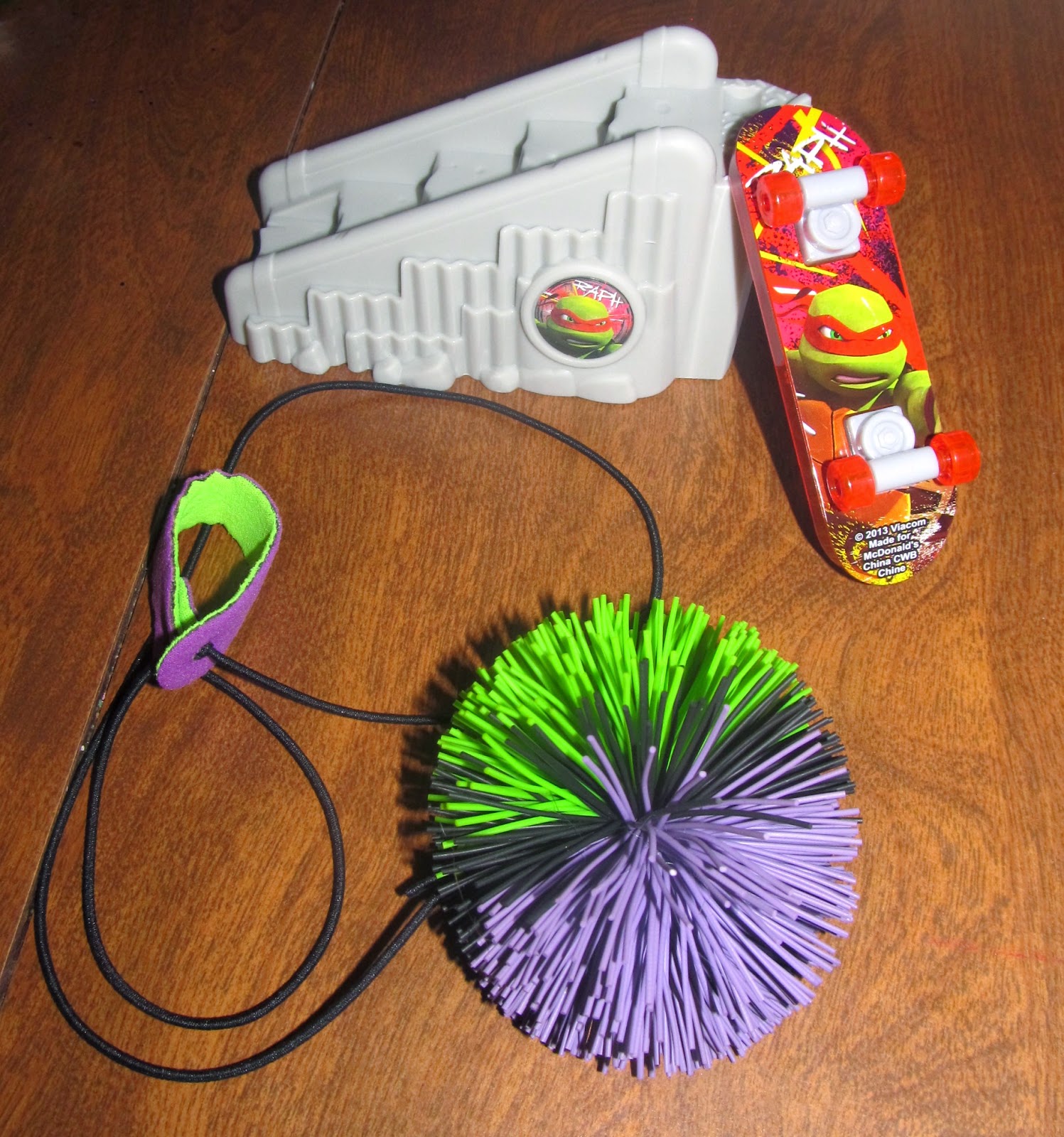 Let's start with this koosh yo-yo thing that straps to your wrist. I threw this on, grabbed my hackey-sack, got a bandana on my australian shepard and went to the park to toss him a frisbee... because that is my lifestyle. No. Actually, I pretty much spent a good half-hour wanging this koosh ball around my cave and knocking random sh*t over. Most. Exciting. Half-hour. That room. Has seen. And a TMNT skateboard and ramp set from McDonalds! 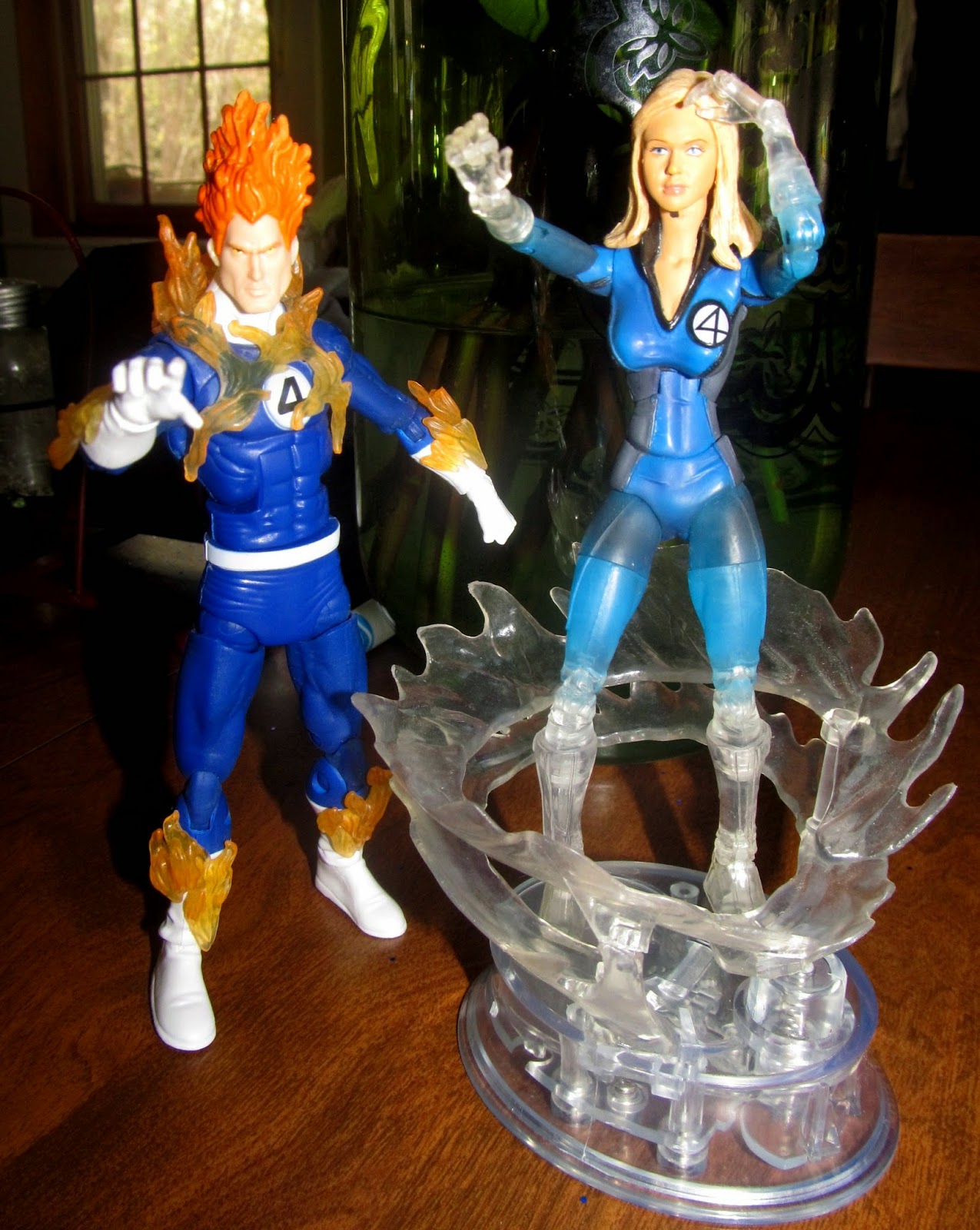 A hot piece of brother and sister action! Wait... No. First we have Johnny Storm from the 2008 Marvel Legends Ares BAF line. And a Jessica Alba as Sue Storm action figure that, funny enough, is the same one I bought for my daughter when the movie came out back in 2005. They look pretty rad together right? 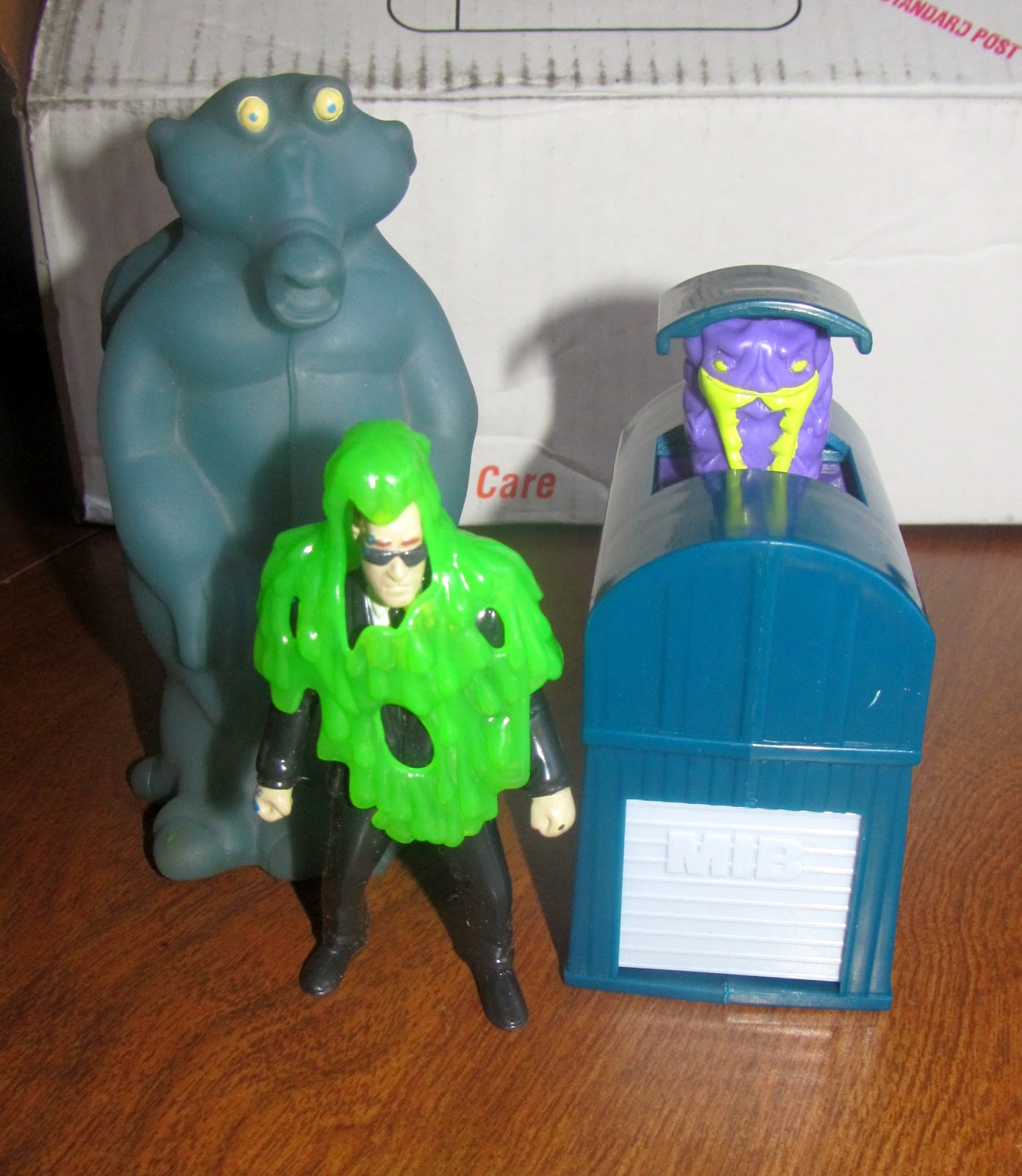 Next up is this set of Men In Black Burger King toys from 1998. The set on the left is pretty disgusting actually. You fit the little guy with the green goo INSIDE the big blue guy. Yeah. And then there's the hangar looking thing with the peek-a-boo creature poppin out the top. Creeper. 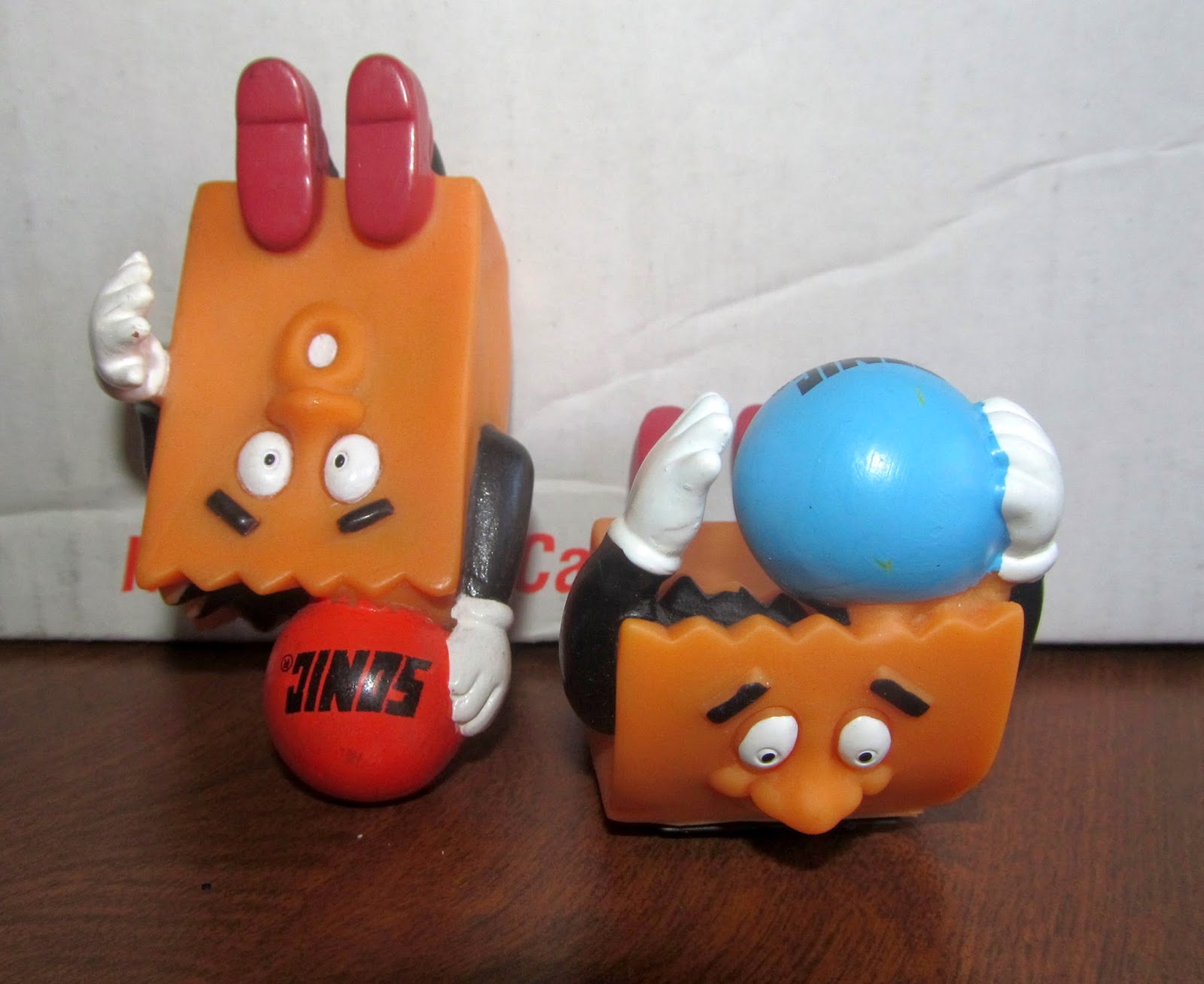 Miss M knows I like a good, goofy food mascot toy... and these guys for Sonic, called "Brown Bag Juniors" are right up my alley! I don't have a Sonic around where I live, so these are a great get! I do want to mention that Sonic could have stepped up their game a little and come up with a better mascot than a brown paper bag. Honestly Sonic. 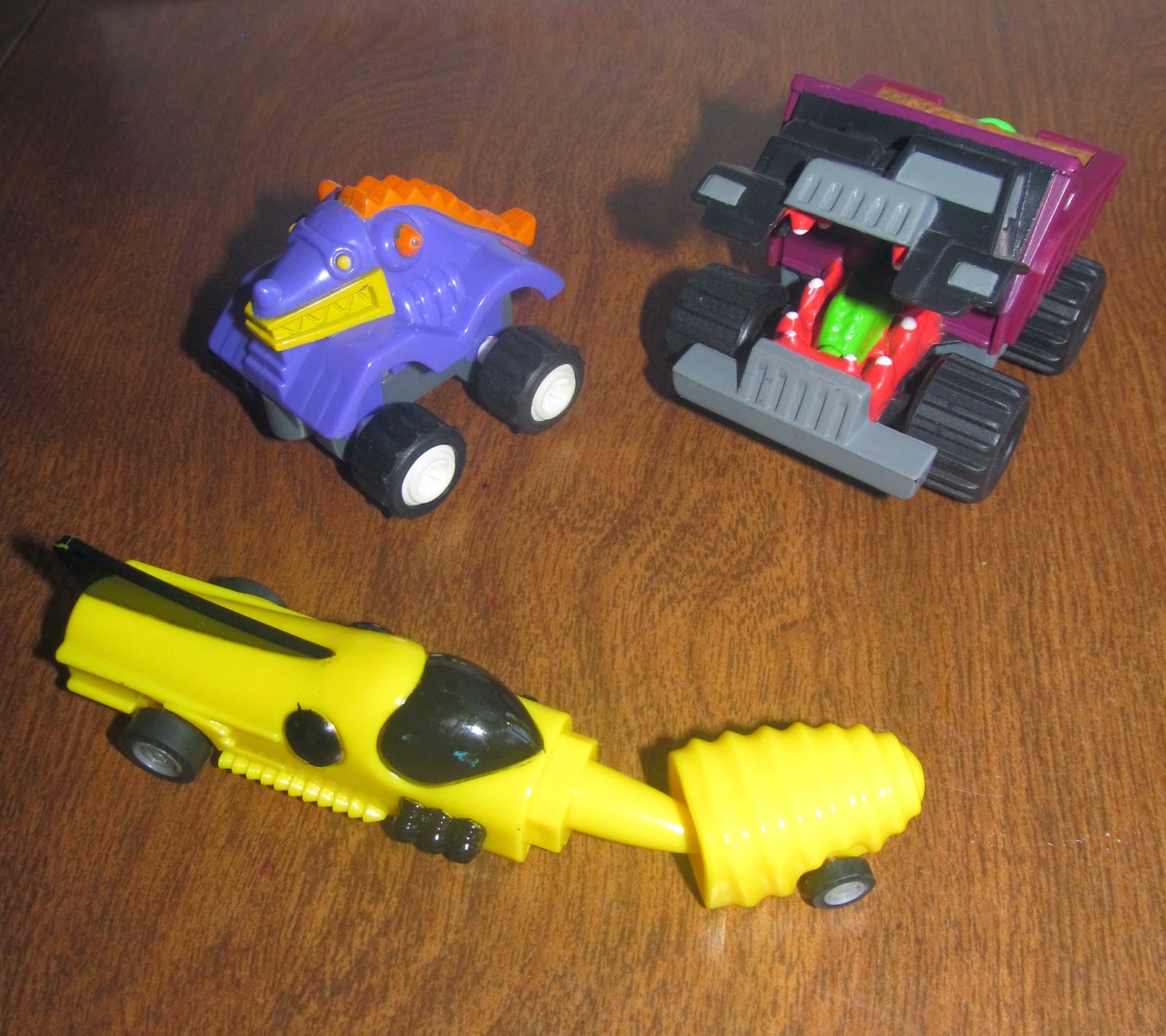 Some miscellaneous fast food vehicles. One pull-back, one dump truck that becomes a horrific open-mawed monster, and a race car that, less threateningly, becomes a pen. 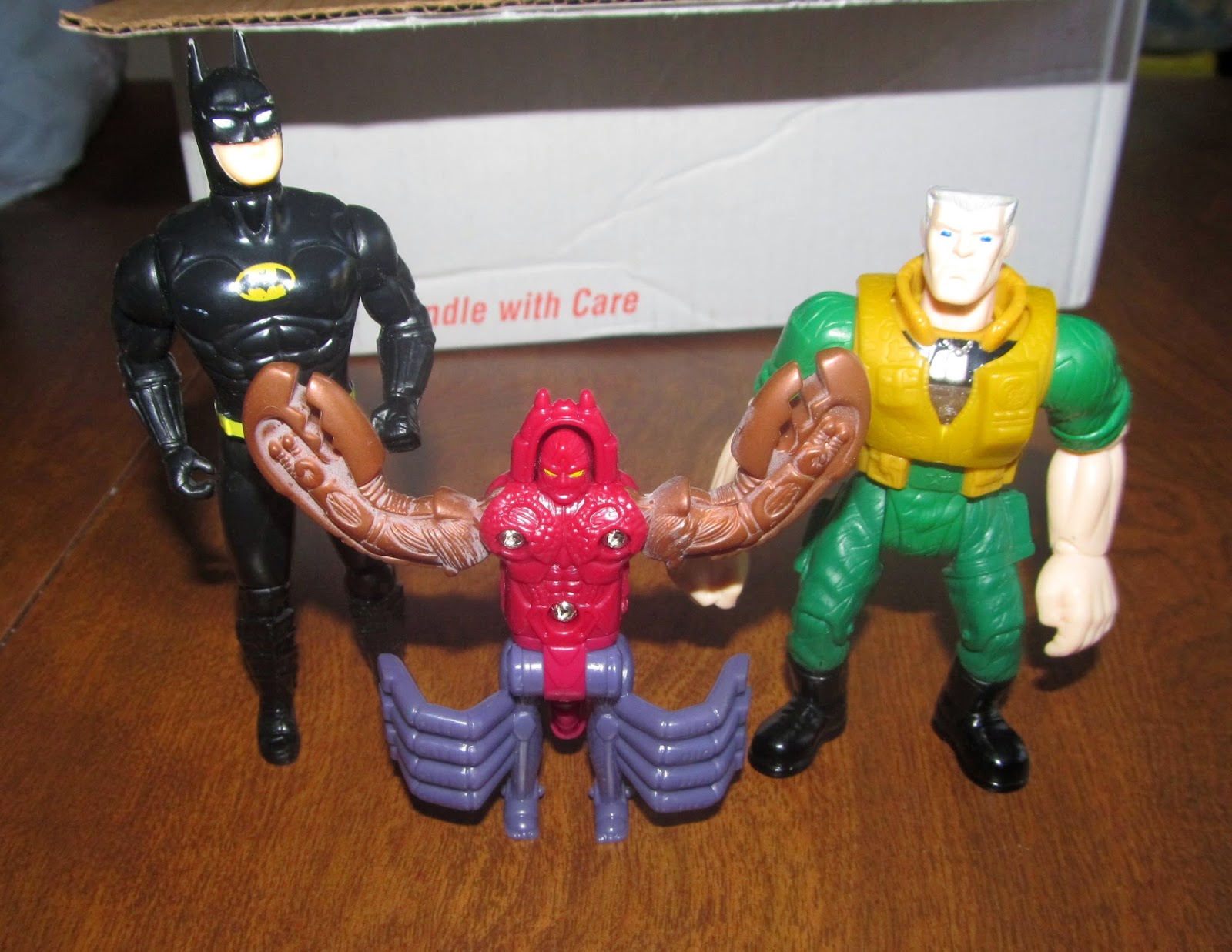 Random handful of action figures. The original puffy-faced Batman action figure from the 1989 film, and a couple of Happy Meal toys, including a Beast Wars Transformer and a Small Soldier. 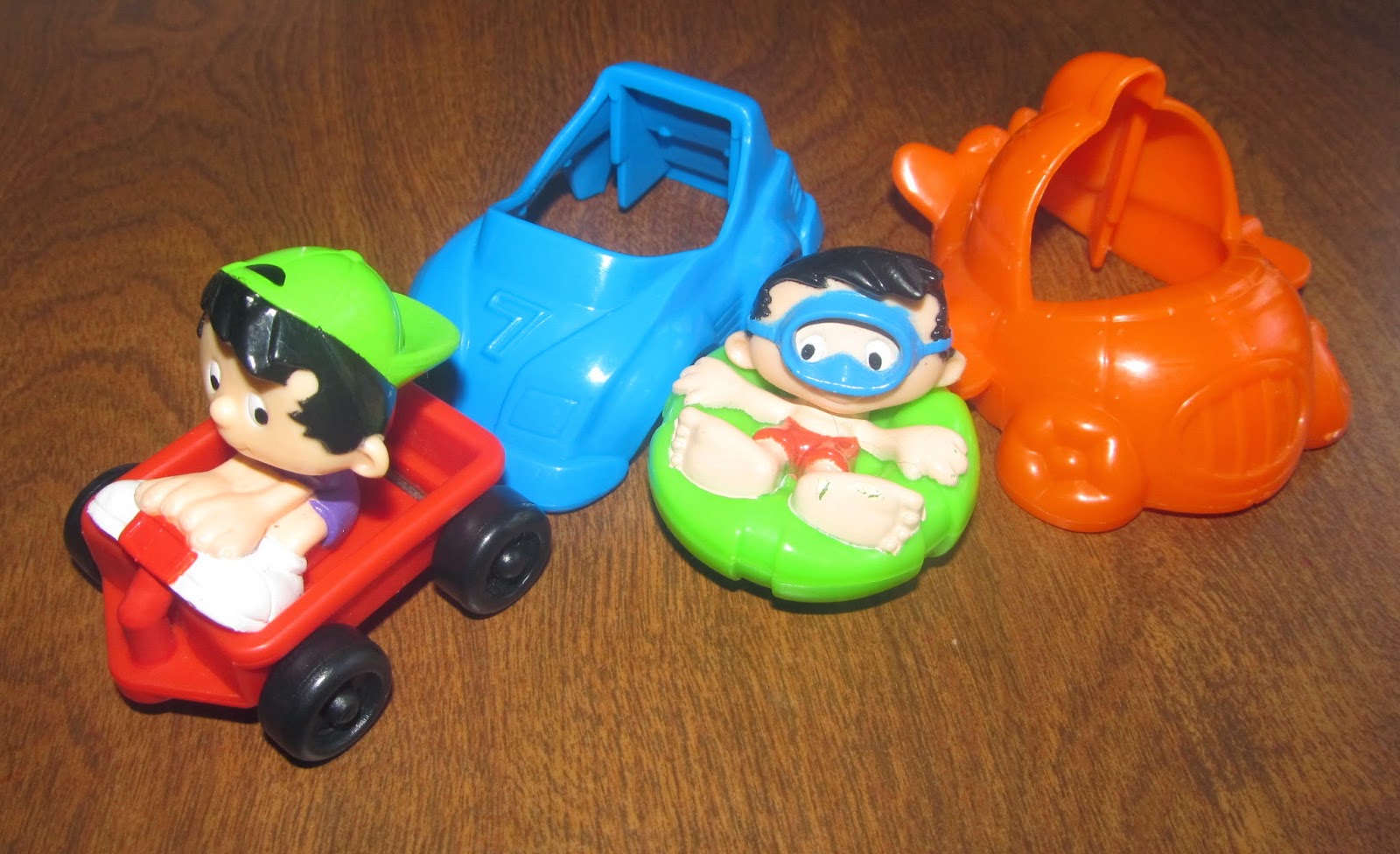 Some toys from Bobby's World! Howie Mandel's 90's kid's show got a set of Happy Meal toys that showcased different fantasies of Bobby's being lived out, as his wagon transforms into a racecar and his pool toy becomes a sub. 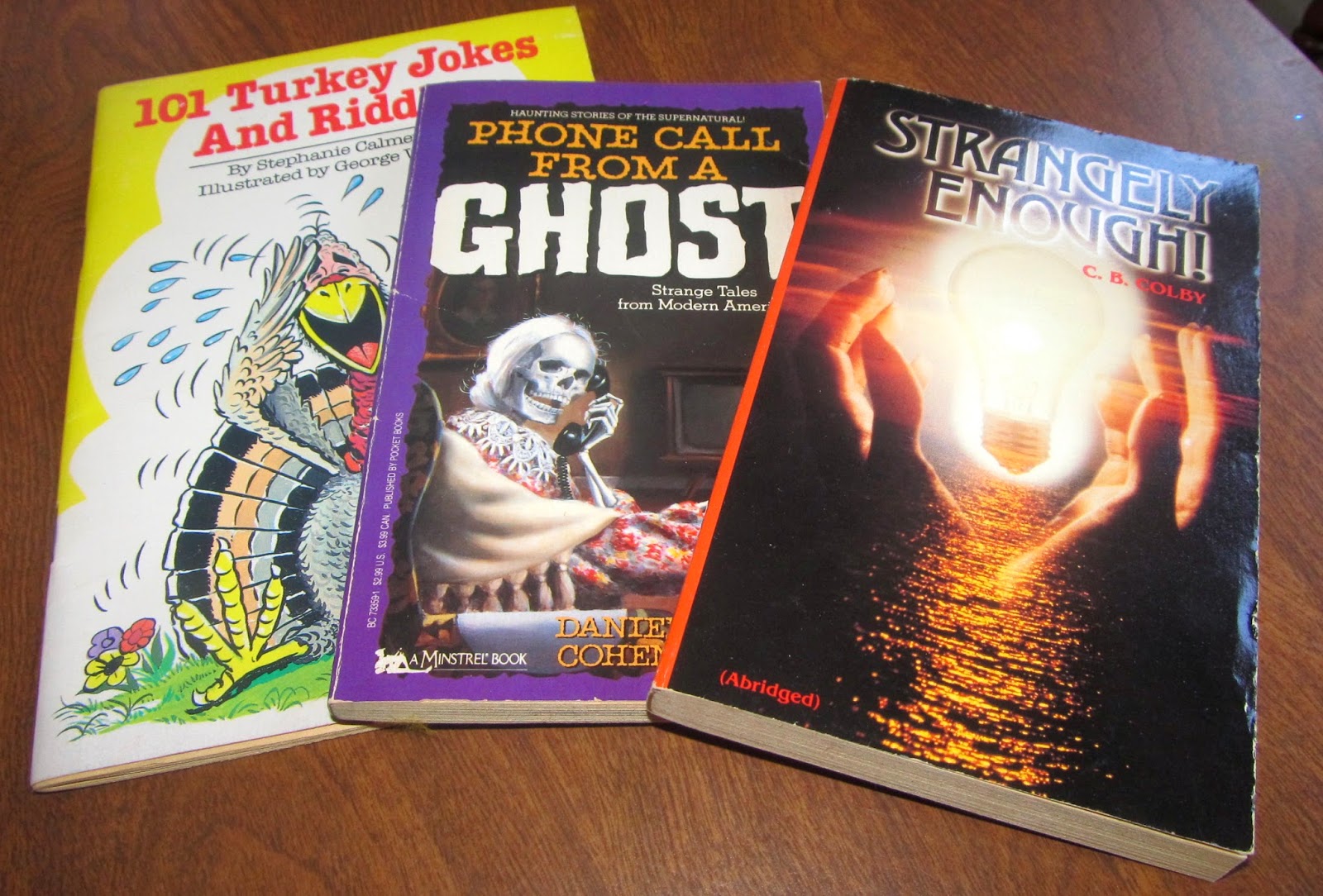 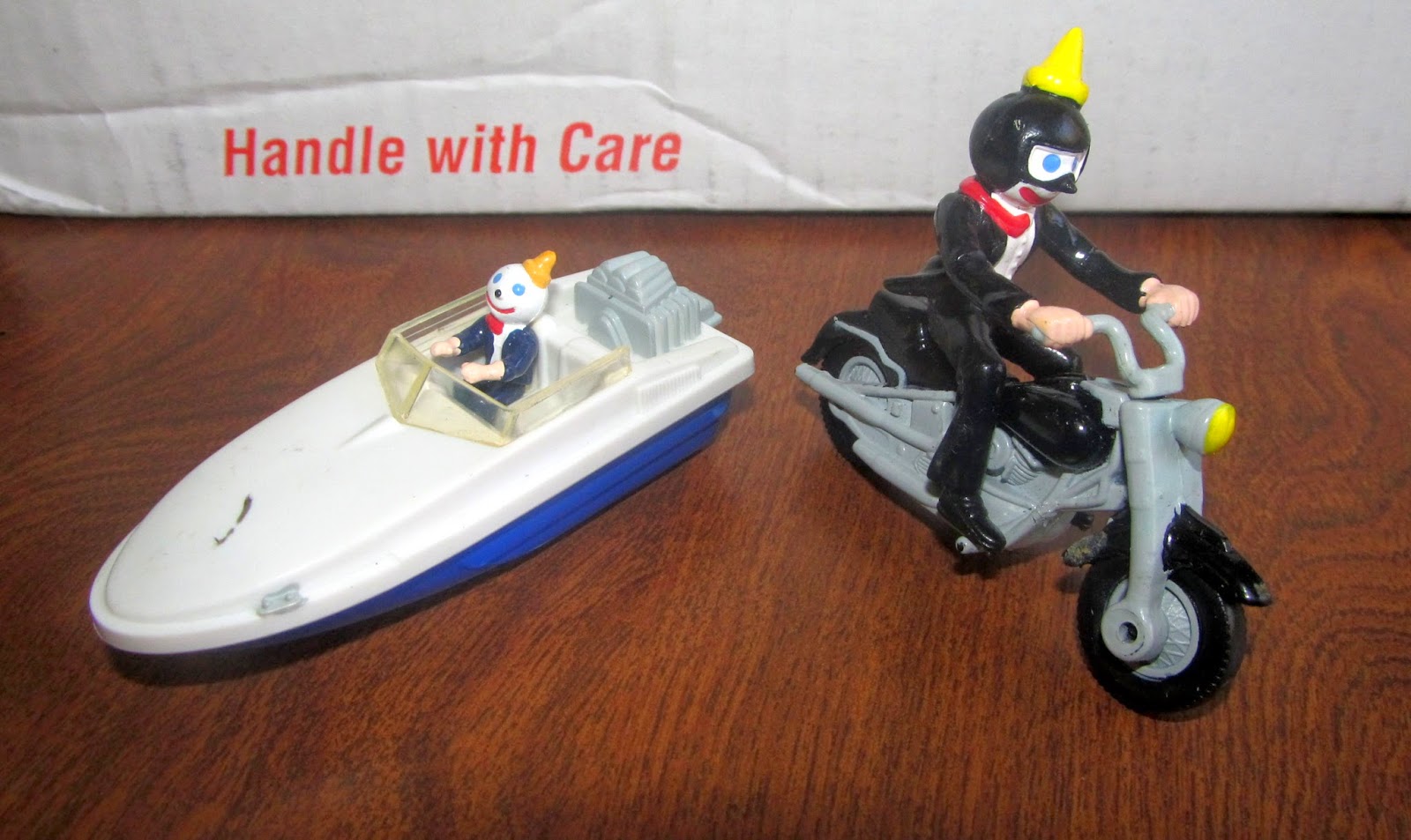 Two of my FAVORITE items in this whole package are these Jack in the Box mascot "Jack" toys. My brain melted a little bit when I pulled these out and beheld them. There isn't a Jack in the Box restaurant anywhere near here... and I absolutely ADORE their ad campaigns. The character of Jack is irreverent, only very mildly creepy, and always unexpected. Being able to add these to my shelf of fast food ephemera is a real treat! 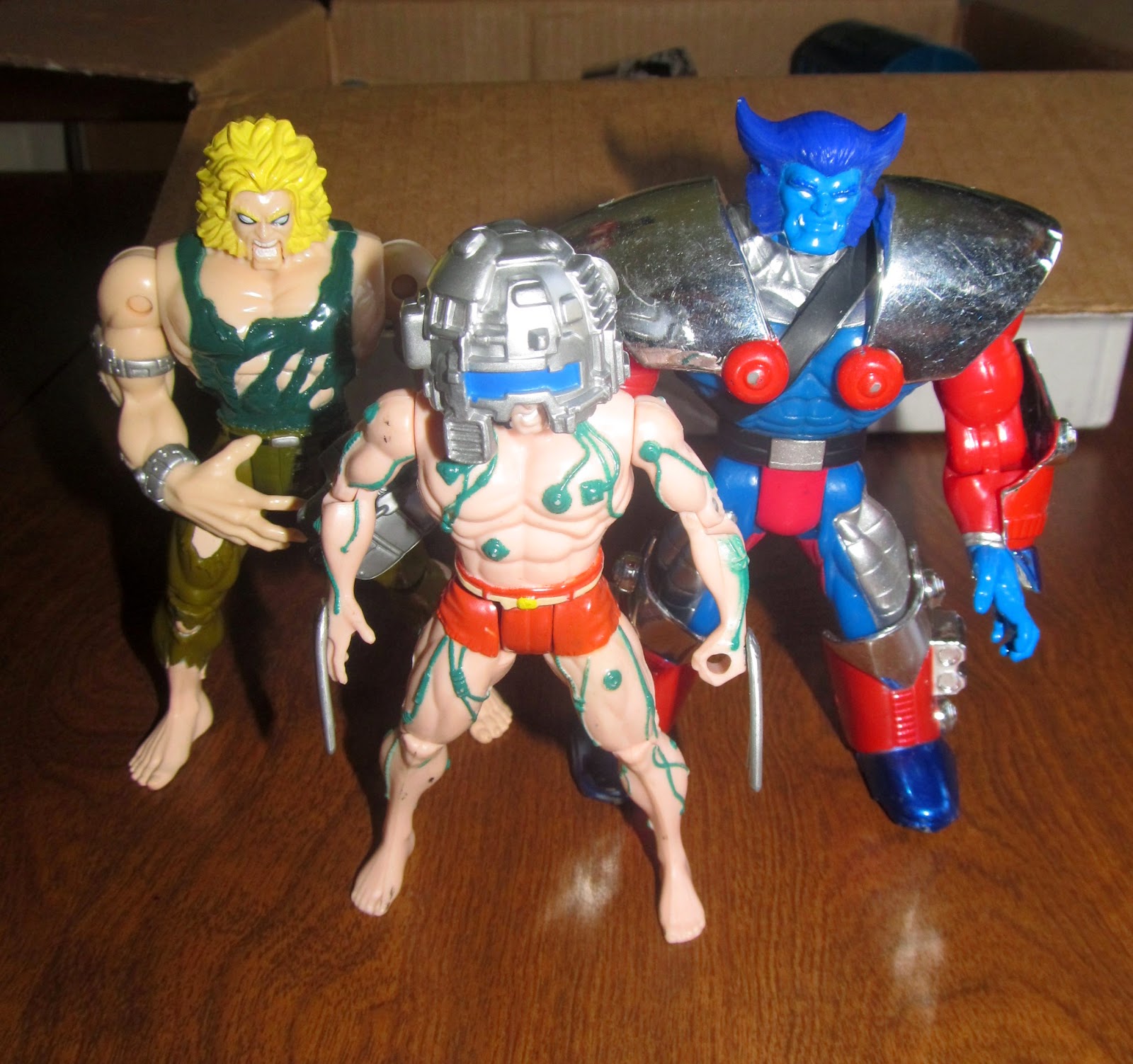 Next up is this trio of Toy Biz X-Men from the mid 90's. Captive Sabretooth, Weapon X Wolverine, and Mutant Armor Beast. Once you get out of the first two waves of the X-Men action figures from Toy Biz I started to lose a bit of interest... I do appreciate the insanity of lines like the Mutant Armor subset though, and the details on both Sabretooth and Wolvie are pretty great though! What really got me squealing though was these: 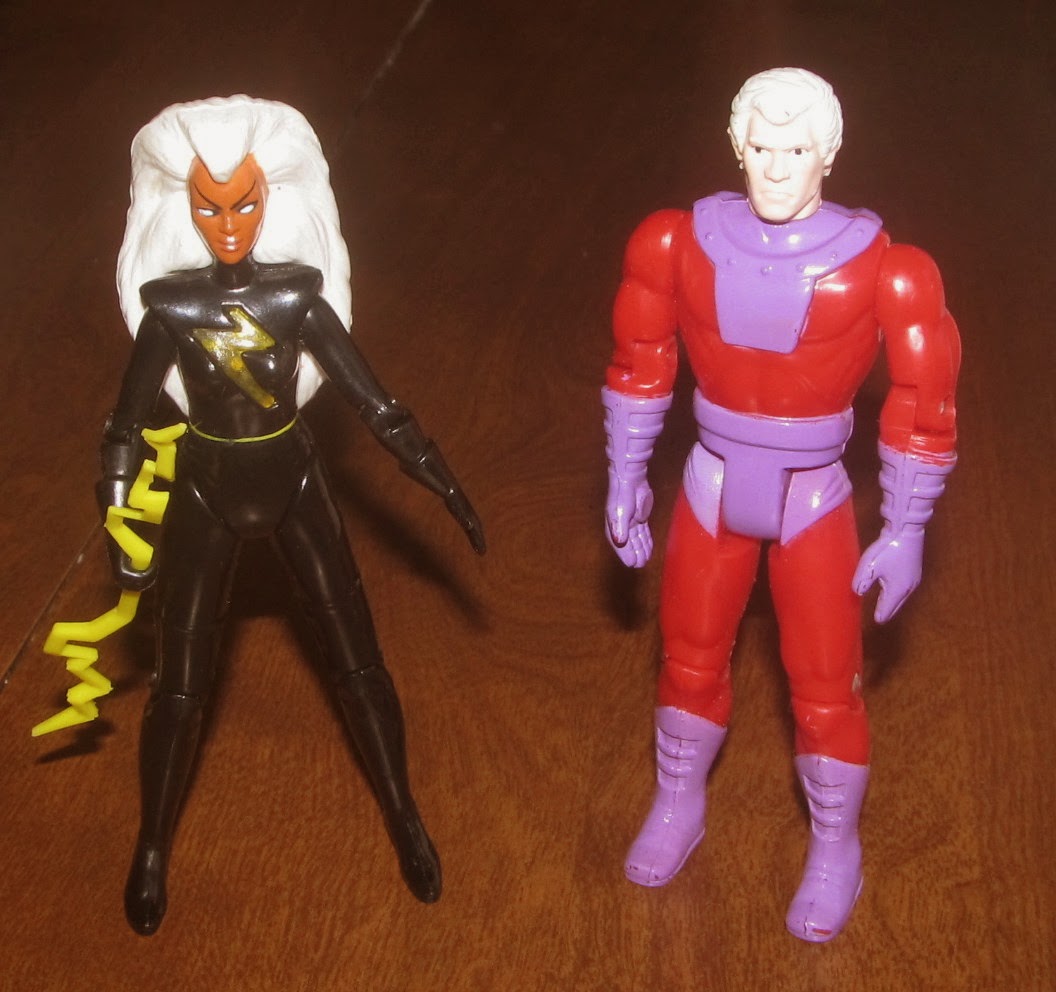 Toy Biz Storm and Magneto from the very first wave of X-Men figures! I FLIPPED OUT when I realized Miss M had bestowed these action figures upon me!!! Storm was one of a very small handful of female action figures I owned as a kid, and I treasured her for it! Magneto was never really an A-list villain when I became familiar with the X-Men as a kid. He was just sort of easing out of his position as Headmaster at the New Mutants school and taking his place as a member of the Hellfire club... but he wasn't really doing much villainy at the time. Even Emma Frost was starting to lighten up a bit by this point. And by the time he became the leader of the Acolytes I wasn't as faithful to the main X-books as I once had been. But as an adult I have developed a true love for all things Magneto, and I was astounded to have this old fave back in hand. But then I pulled this out of the box: 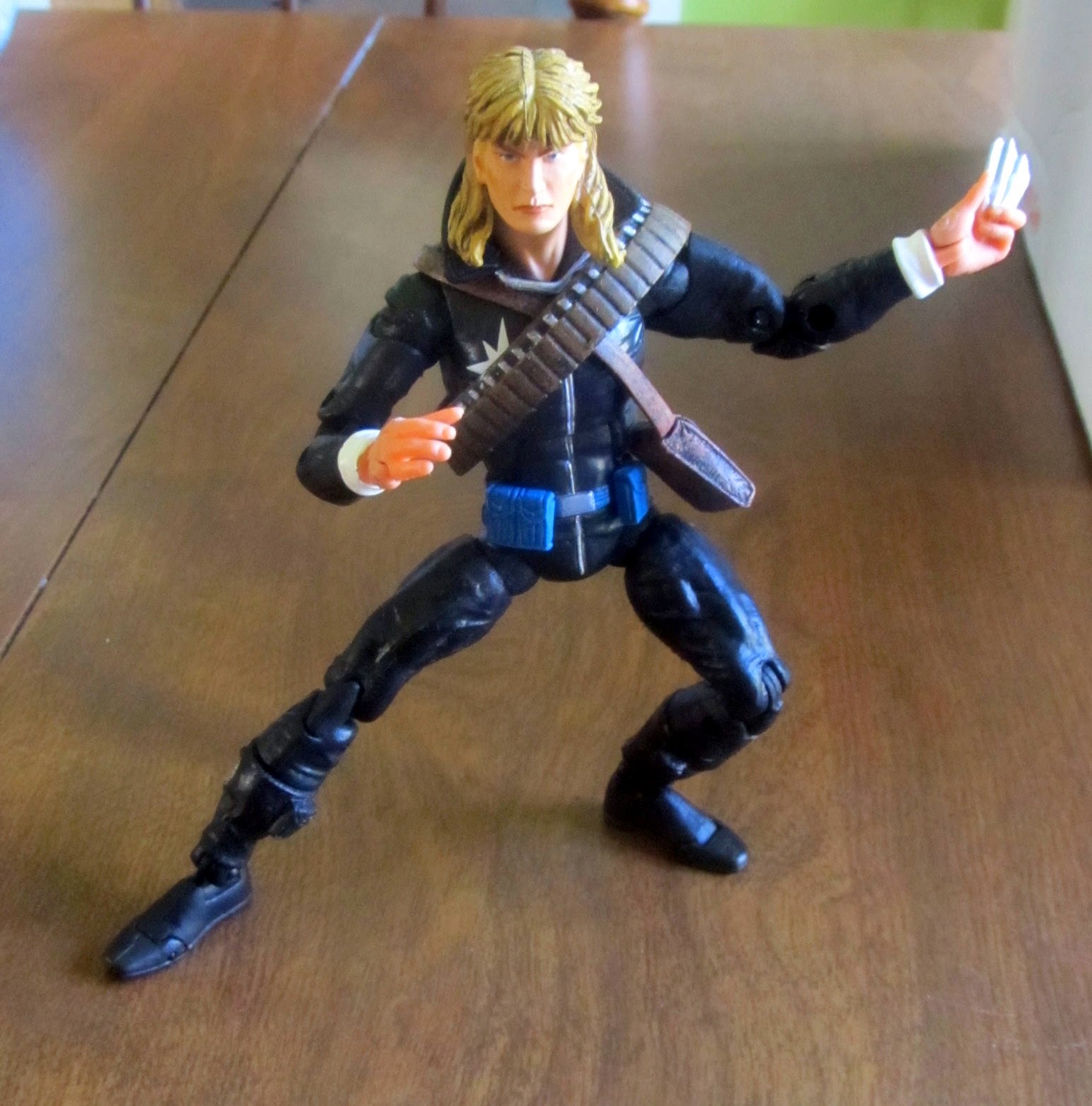 Pure. Sex. In black leather. Longshot!!! This is a Marvel Legends figure from 2006, and it features one of my all-time favorite X-Men characters, Longshot! Longshot is from "my" X-Men. When Inferno was starting out, and I was discovering the X-Men for the first time, the entire world believed them dead, they were invisible to all electronic means of detection, and they had a home-base in Australia that they had taken over from the cyborg Reavers. Longshot was a member of the team alongside Dazzler, Rogue, Storm, Colossus, Havok, Wolverine, and Psylocke (who was still a purple haired british woman at the time, not an Asian ninja sex-doll).  Longshot left the team shortly after, and was not heard from again for a very long time, but he brought plenty of mythos to the table, introducing the X-Men to a couple of their weirdest and yet enduring villains: Mojo and Spiral.

I can't thank Miss M enough for this spectacular package!!! I always appreciate getting neat toys in the mail from good friends, and Miss M is definitely that. Don't forget to check us out over at Geek Fallout, with our other good friend Brian, the Trash Man from Pop Pop! It's Trash Culture, and the regular hosts, Chris, Evan, and Rich!

That's all I've got for tonight kids! I'll be back soon with some Geeky Goodwill Goodies! Until then, Happy Hunting!
Posted by Derek Ash at 2:57 PM