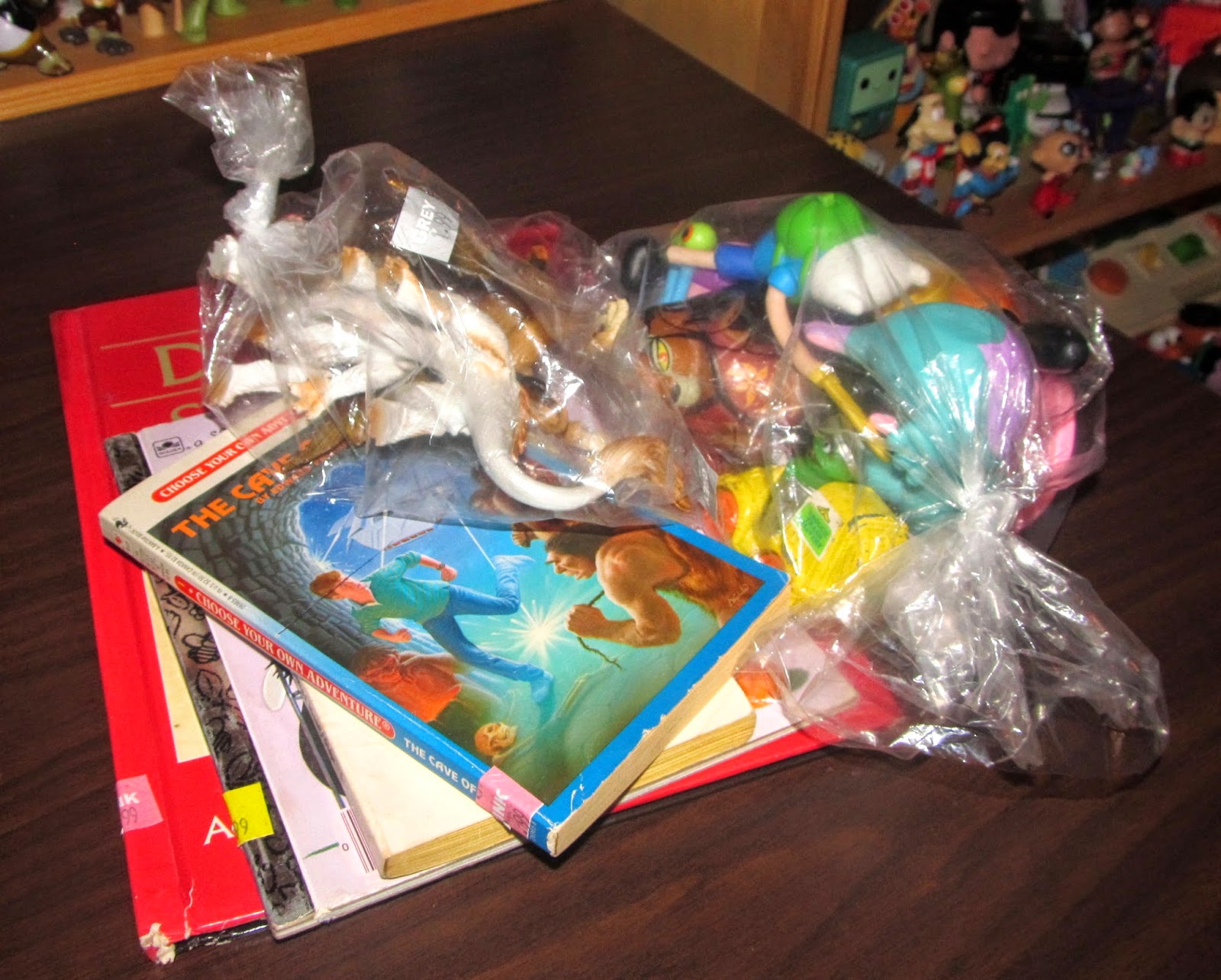 Some books (there's ALWAYS books...) but also a couple of semi-fun grab-bags this time around. All of the books in this post cost me .99 cent apiece. Let's take a closer look shall we? 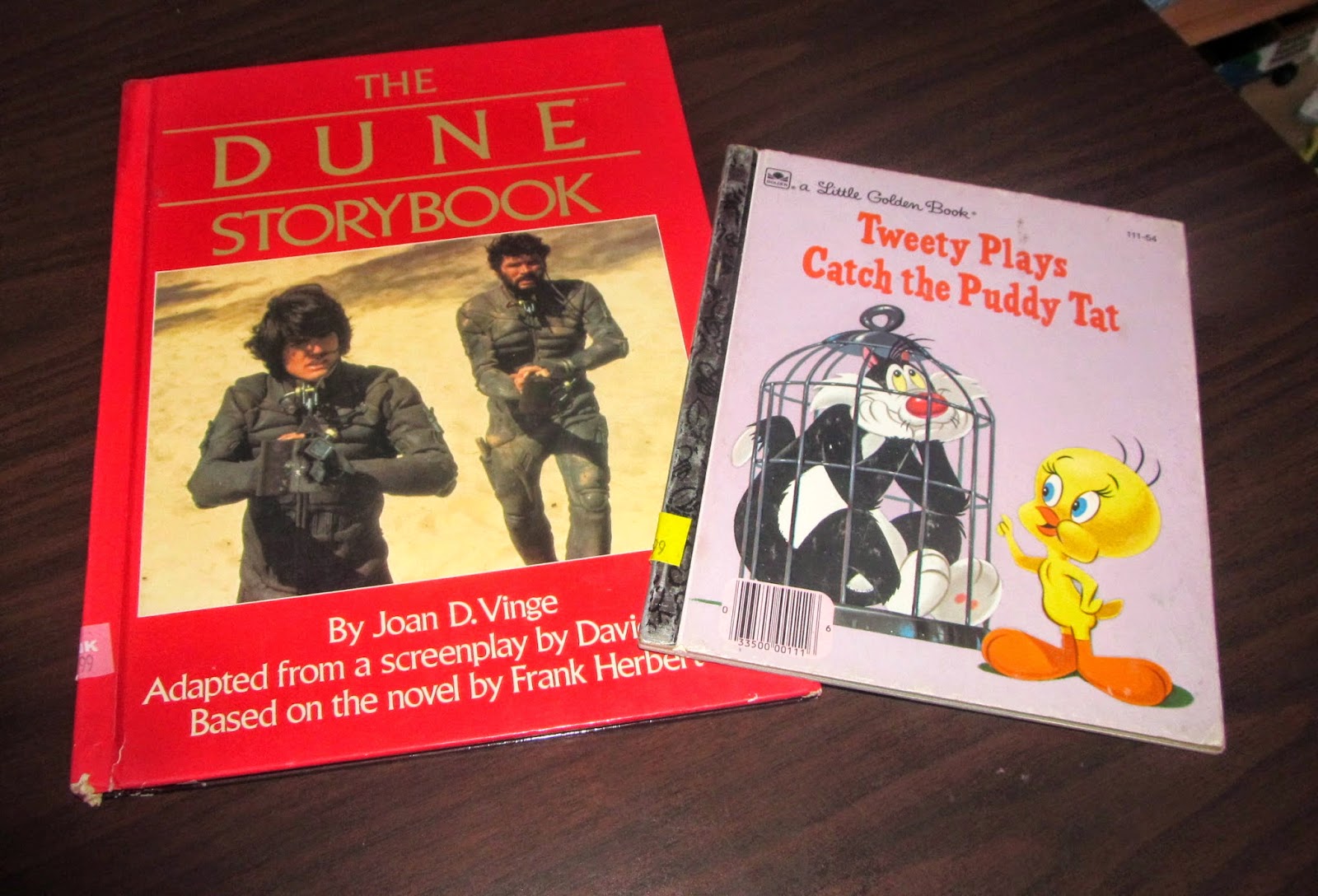 First up from the kid's book department we have The DUNE Storybook from 1984. I have a terrible confession to make: I have never seen this movie! I have STILL not read the book/s and I ONLY picked this book up because I knew it was from the 80's and I couldn't just leave it there. But I WILL see this movie... I just don't know how soon. Then we have a Little Golden Book that I very distinctly remember owning when I was a kid, Tweety Plays Catch the Puddy Tat, which obviously starred Sylvester and Tweety. It was memorable for this moment: 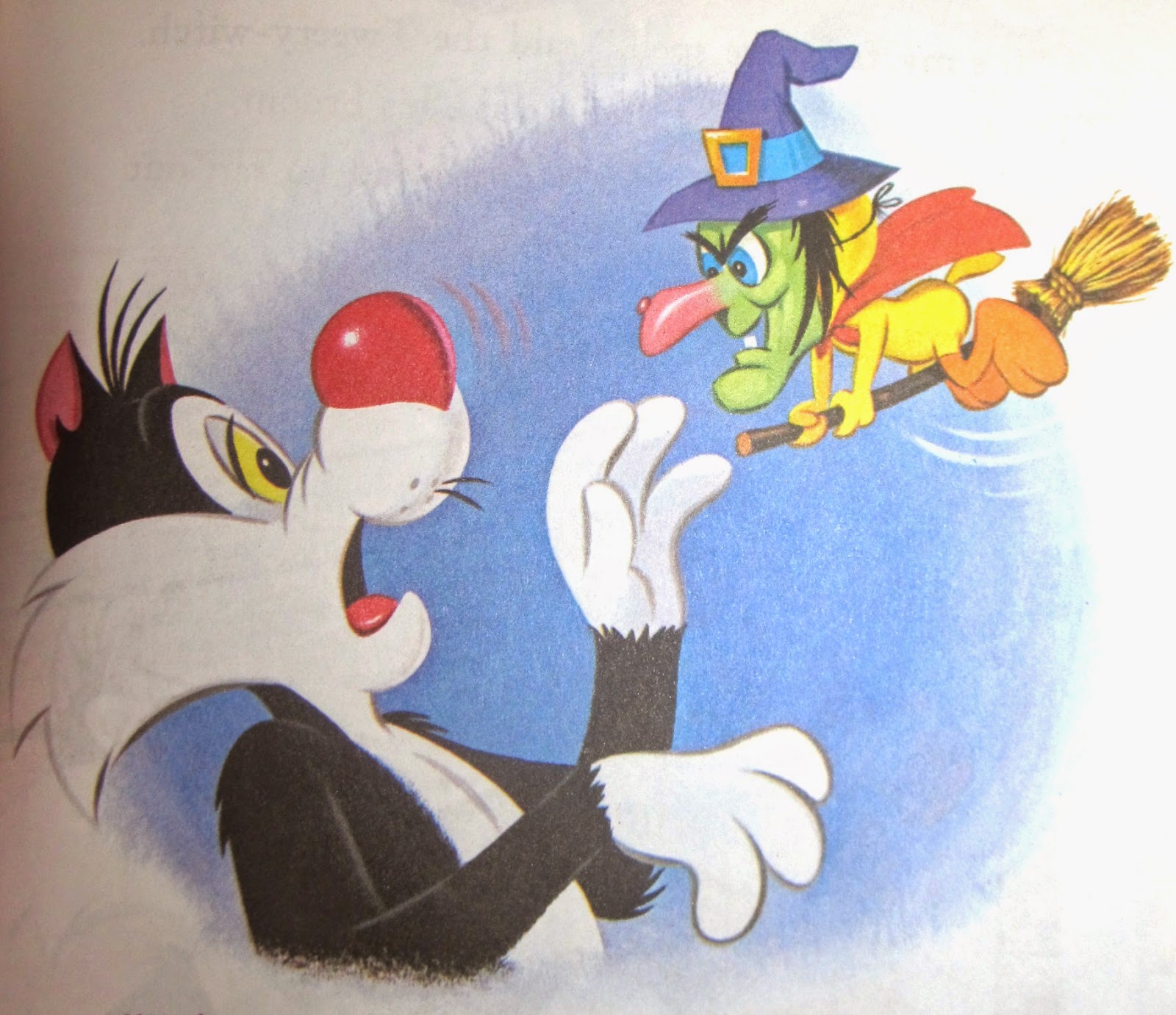 Which TERRIFIED me. I also distinctly recall wondering why the witch's skin was green but the nose was ruddy pink. Also, I know Tweety is a bird, and is only pretending to be a witch here, but how exactly is he flying? 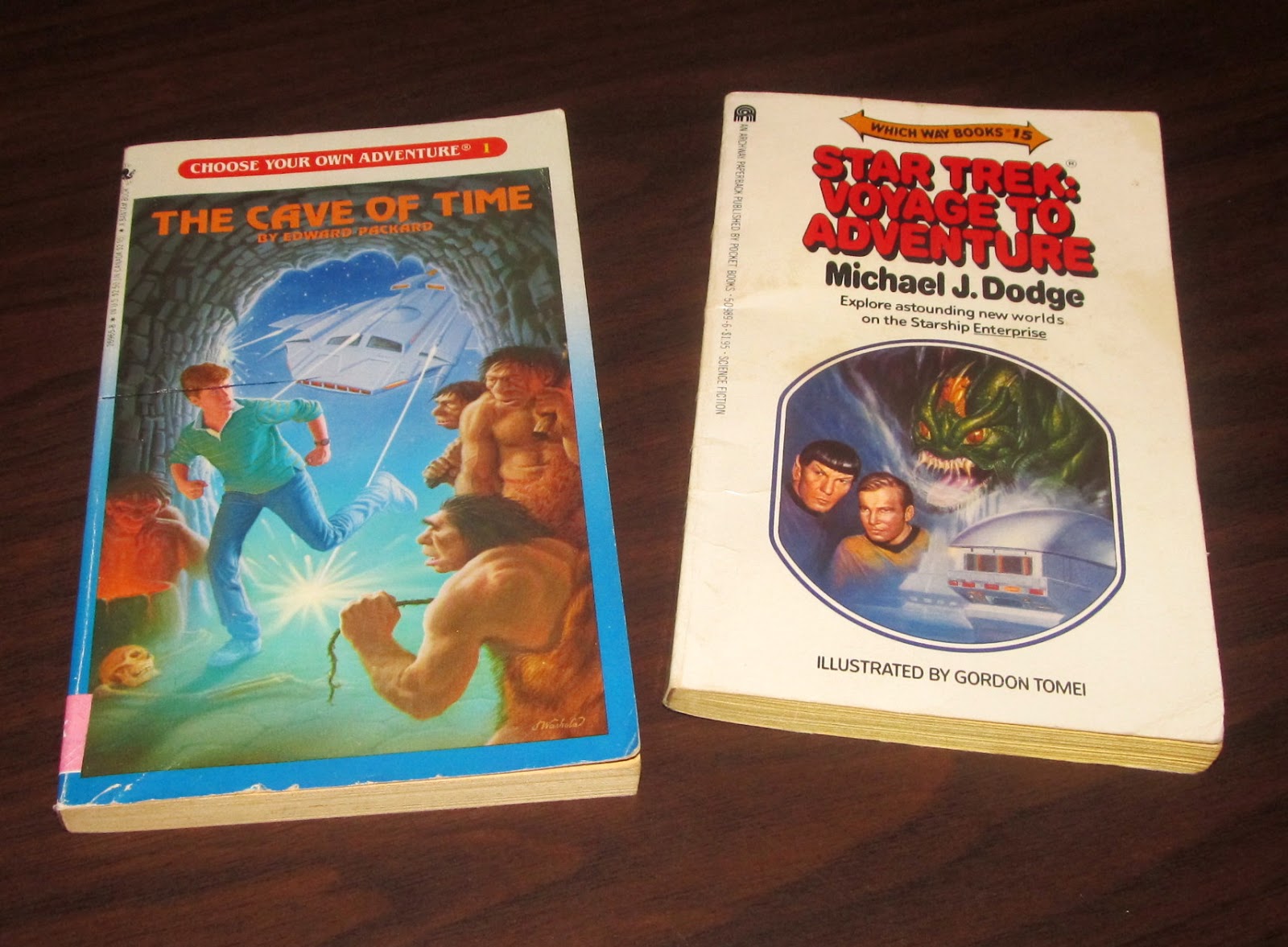 Next up a couple of fun CYOA finds... first up, the very first Choose Your Own Adventure story: The Cave of Time albeit the 19th printing. I don't mind though this copy is from 1986 and will still play through just as well in its 19th printing as its first. I would like to find one with the original cover artwork at some point, but again, that's not really all that important to me. And even though I'm not much of a Star Trek fan, I can't hide the fact that I TOTALLY GEEKED OUT when I found this "Which Way Book" starring the crew of the Enterprise in Voyage to Adventure. 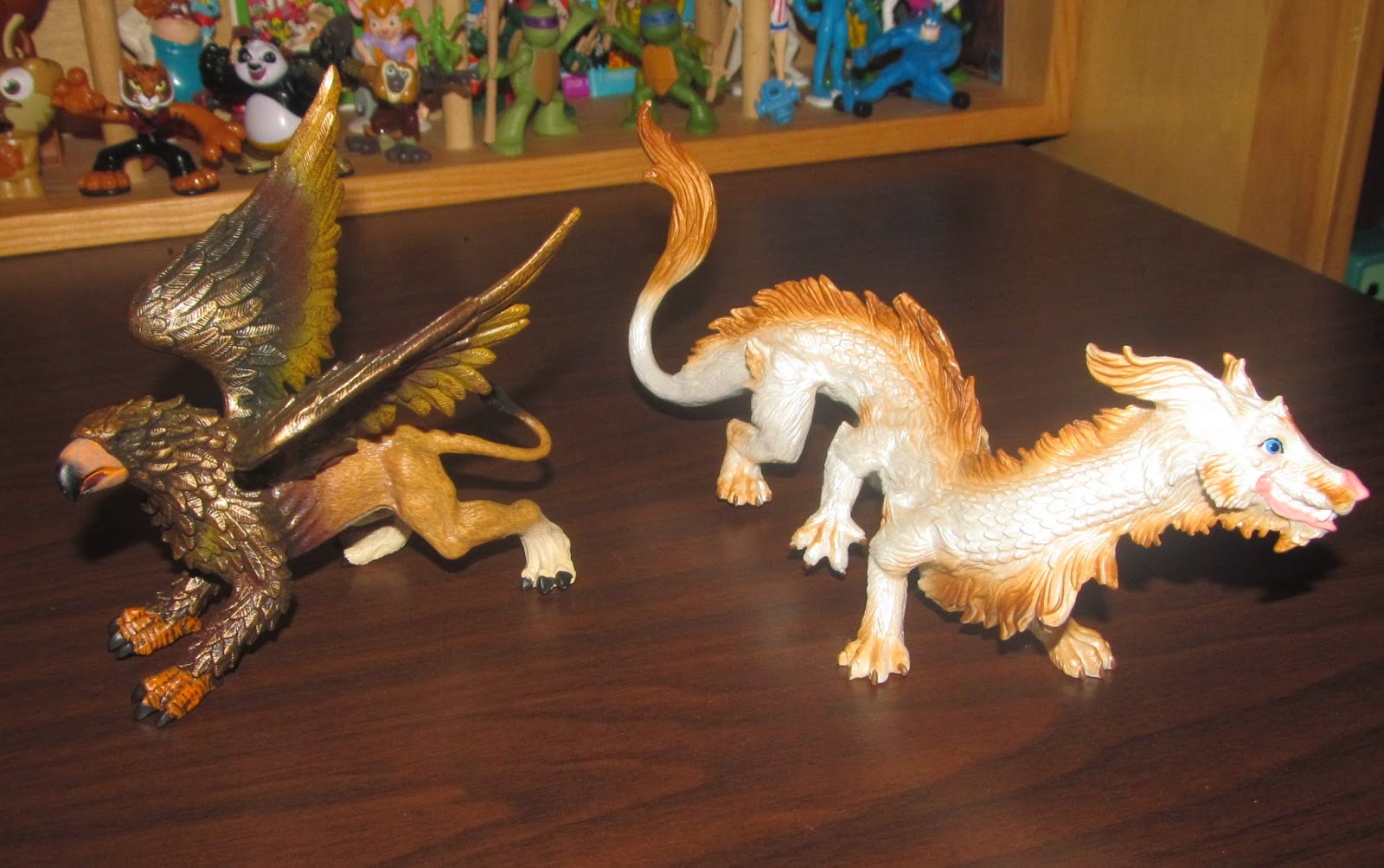 The first of my two grab-bags cost me 1.99 and only had these two items in them. But they're enough! These are toys from Safari Ltd, one of those toy companies that specializes in solid plastic figures in lines such as dinosaurs, jungle animals, and fantasy creatures. Here we have their example of a griffin and a "lucky dragon" which looks endlessly familiar... Anyway, these types of toys usually run for around 10 to 15 dollars... so getting these for about a buck apiece is pretty awesome. 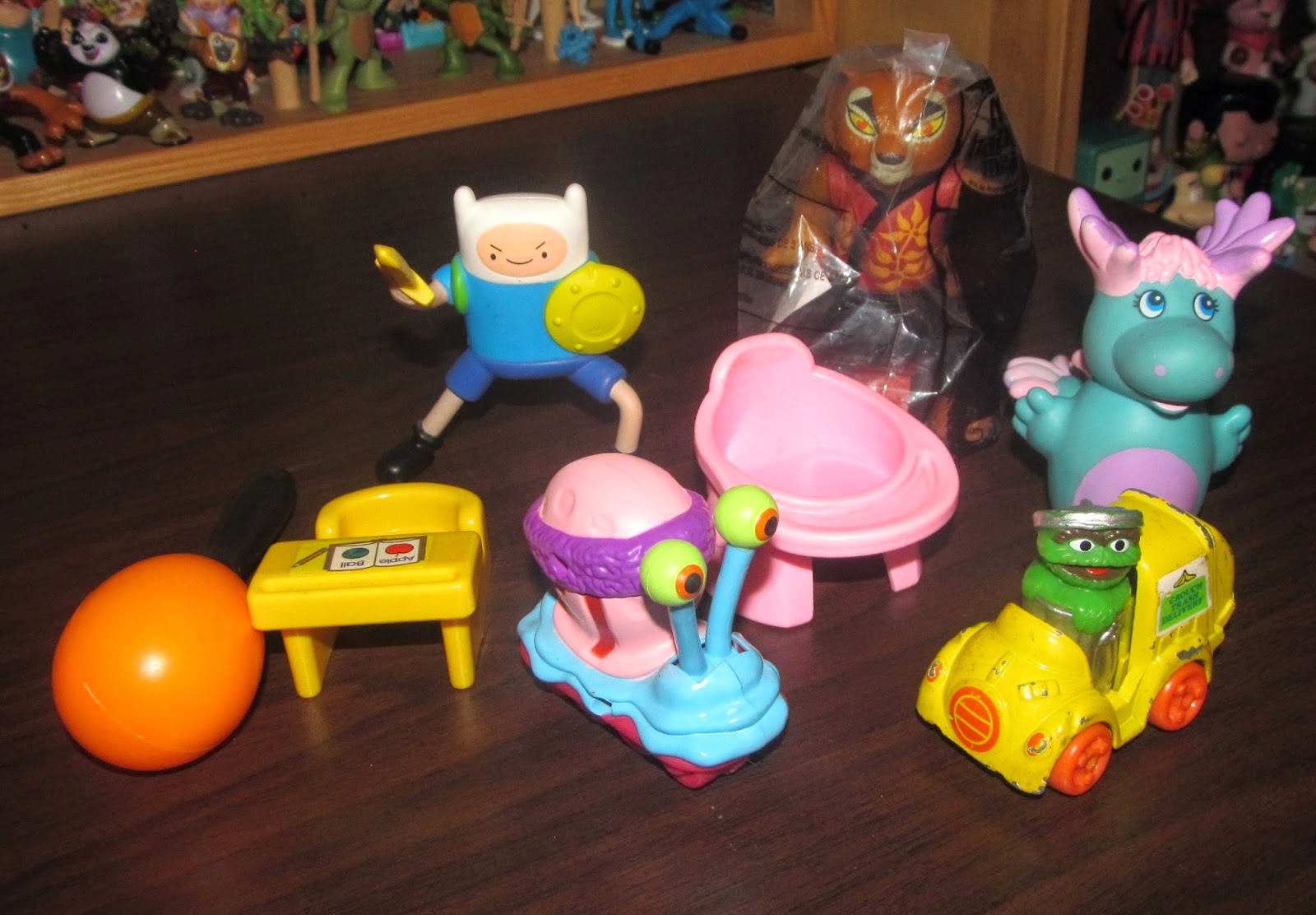 Ironically, the next grab-bag had way more in it, and only cost me .99 cents. I'm going to completely ignore the Little People furniture, because it's not of the type I collect, the Kung-Fu panda toy because I already own it, and the orange maraca. Let's focus on the other stuff. 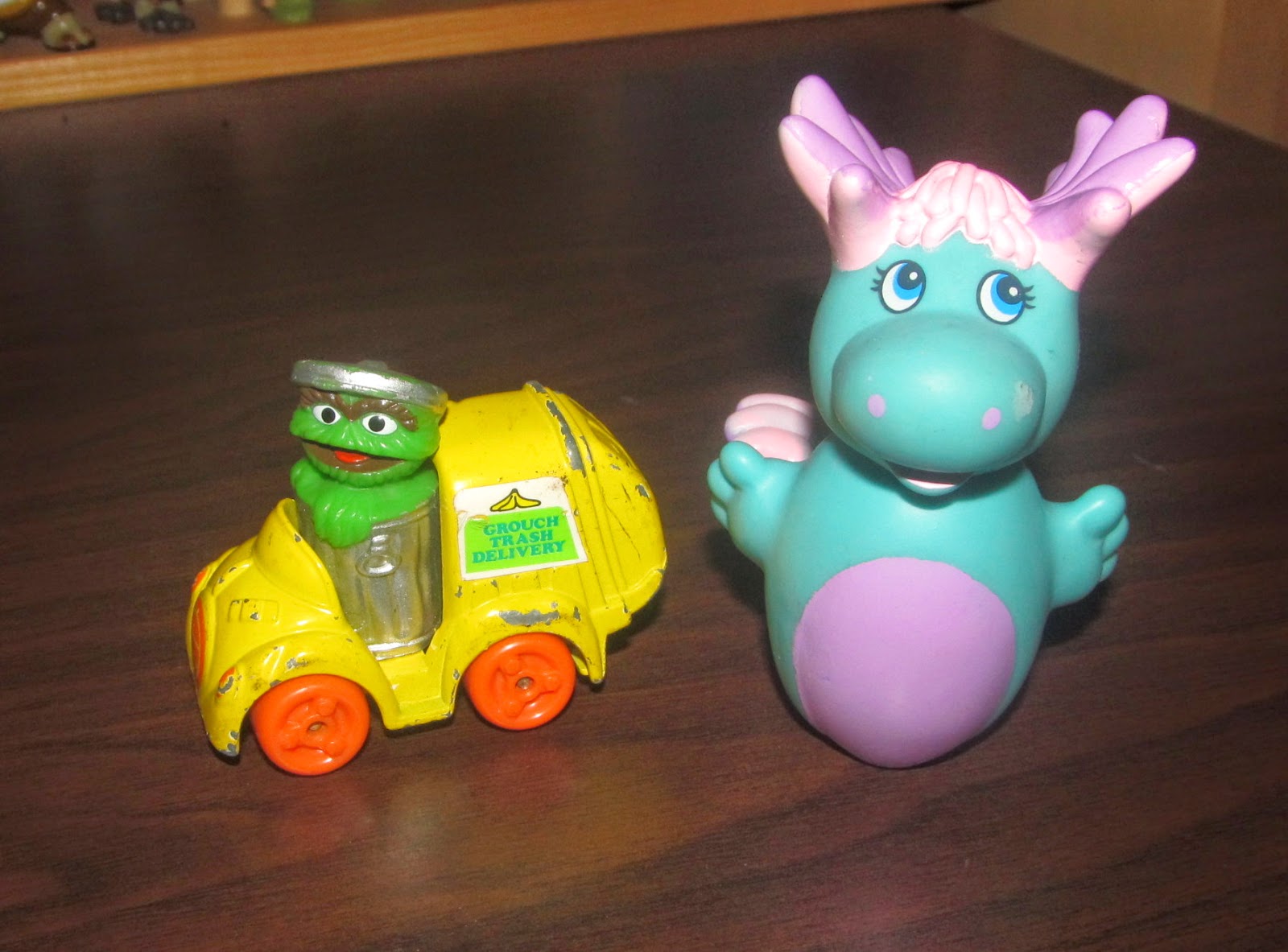 I have already owned two of these Oscar the Grouch Garbage 'Delivery' trucks in the past, and sent one of those off to a buddy. Still, I'm glad to bring another one home. I'll be finding him a good owner in the near future, I'm sure. The blue and pink fellow next to him is a Moosel figure from the Wuzzles line back in 1985. I really liked the wuzzles as a kid, but I never owned any of the toys, so this is a sort of retroactive geek-out. 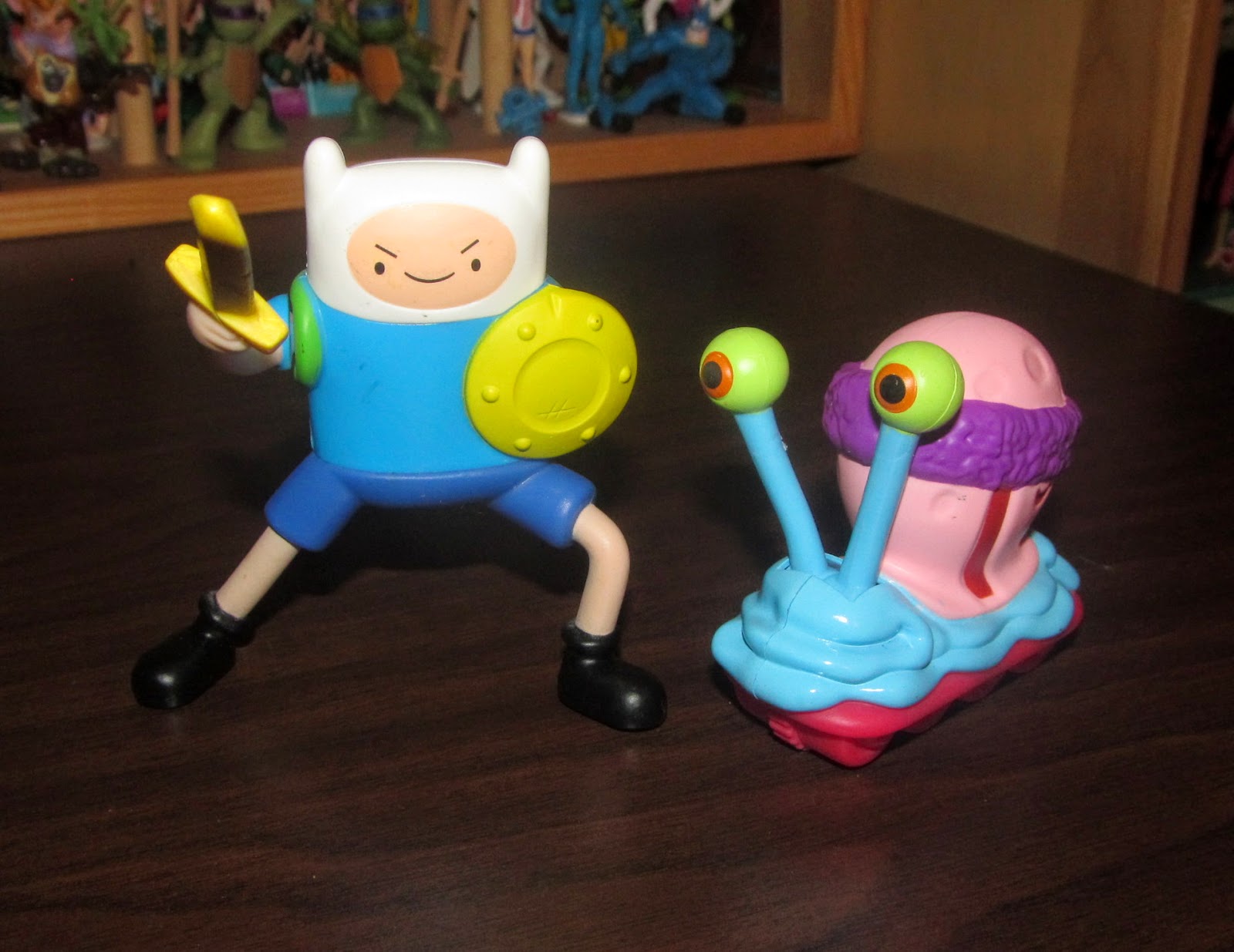 The other two items of note from this particular grab-bag are Finn from the recent Adventure Time McDonald's Happy Meals premiums, and Gary from Spongebob, also a Happy Meal toy, from back in 2012. I wanted to get more of the Adventure Time toys when they came out, but I only ended up with a couple of them. I'm still on the look-out for a bendy Jake figure too. Getting to add this sword-wielding Fin to my collection is the next best thing. I am a pretty big fan of Spongebob, regardless of how much people seem to have grown tired of it. I still find the show funny, classic-yet-innovative, and mind-bending. Spongebob is one of the forebears of the entire trend of cool animated shows (like Adventure Time!) that we see nowadays, and I appreciate him for it. This is a roller-blading Gary with a sweat-band... so I'm pretty pleased. 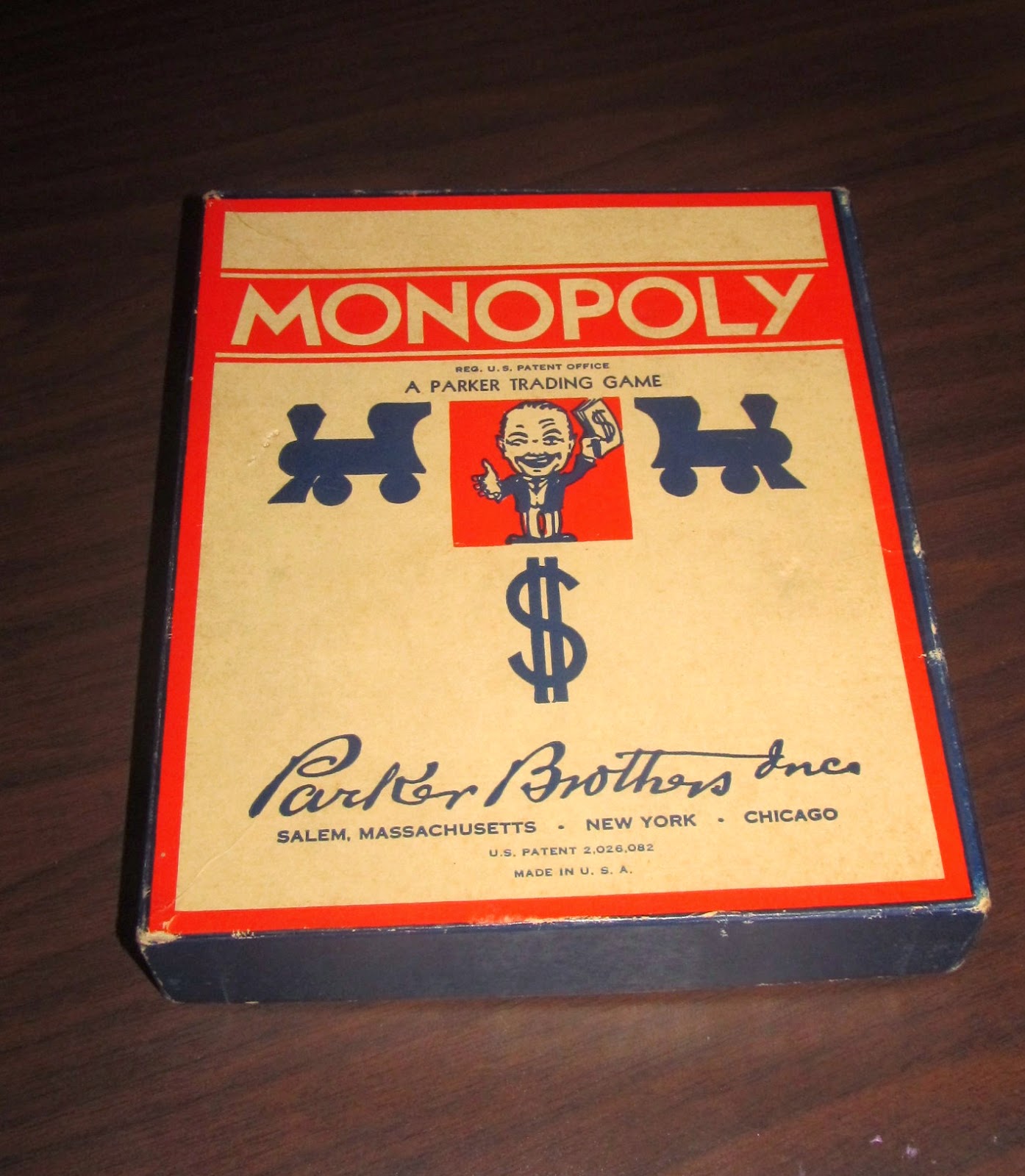 My final find of the day was this old Monopoly game from 1946 or so (had to do some research online for this one). I am NOT a huge Monopoly fan, but the siren call of this ancient boardgame would just not be ignored. I actually paid 6.99 for this, which is the most I've paid for any one thing at Goodwill in a very long time. 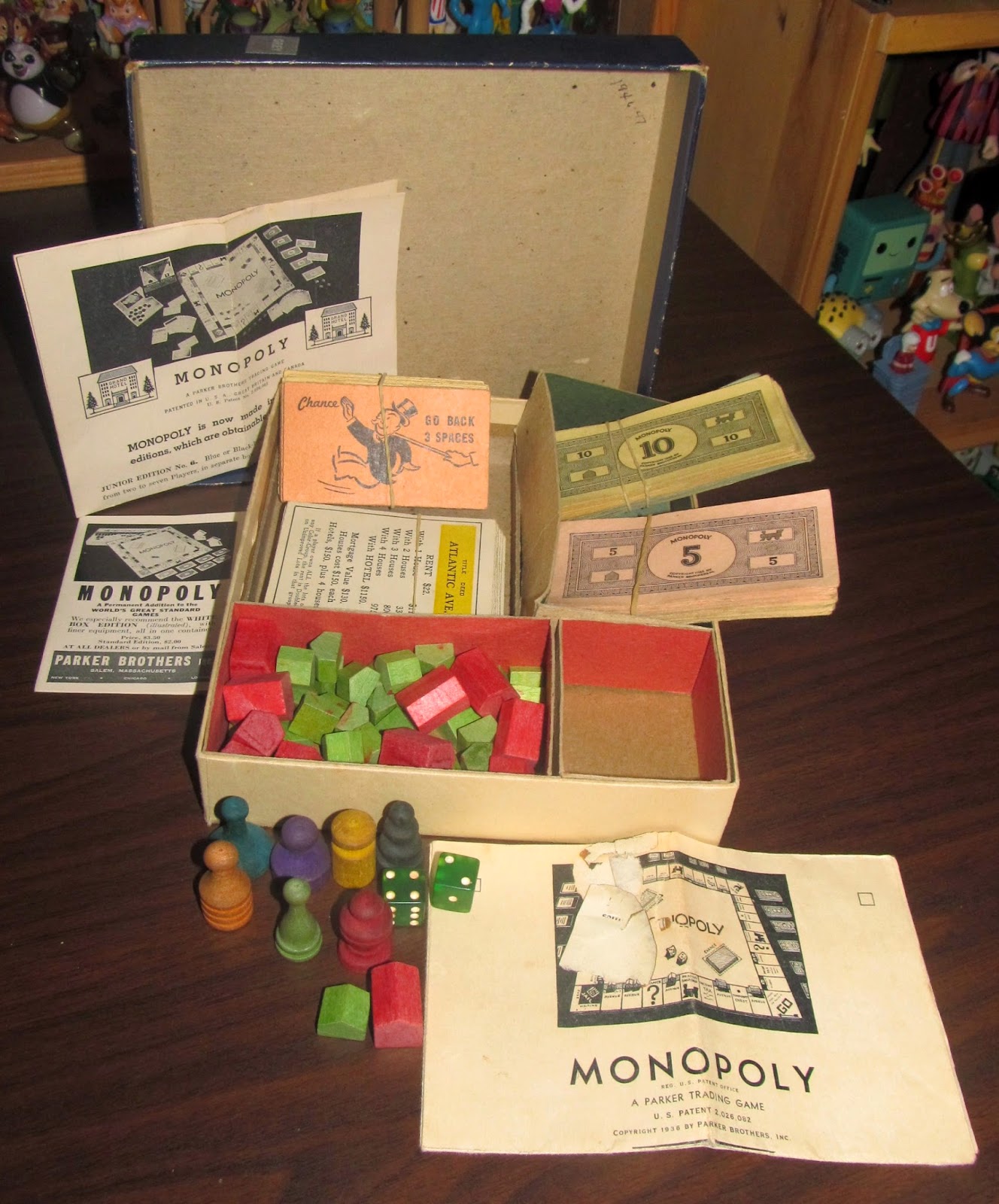 I examined it in the store and yet didn't notice that the game-board itself was not included. Don't know how I overlooked that. I think this was one of those rare occasions that I tricked myself into thinking I was buying something that was "worth something" other than to just myself. This is the sort of thing that ALWAYS happens when I let this type of thinking influence my buying at Goodwill. I still really like the fact that I have such an old edition of the game, but I don't think I'm going to hang onto it for long. You can see this old version of the game came with wooden character pawns instead of the metal ones we use today (this is legit, these are not just random pieces someone included in the game before donating it... Research.) I think the jade-green dice included are from some other game, but other than the dice and THE BOARD ITSELF, this game is pretty neat and complete.

Well, that's it for now kids! I'll be back soon with more Geeky Goodwill Goodies! So until then, Happy Hunting!
Posted by Derek Ash at 6:45 AM