So... it's been a while since I've just straight up featured a buy of mine from Goodwill. There's been a lot of Halloween stuff and stuff about excellent people generously sending me awesome... stuff. A lot of non-Goodwill related stuff. So I thought I'd kick off this post by talking about Joss Whedon's recent adaptation of William Shakespeare's "Much Ado About Nothing"

It'll make sense in a bit, I promise. But be WARNED: This post is much ado about Shakespeare.

The last week of October I was sick with the flu. Not the oopsy-poopsy barfy-warfy flu, but the kind where it hurts to move, you're Gravitron-level dizzy, you lose your voice, and you feel alternatively freezing cold and hinges-of-Hell hot in turns.  That flu. I would have traded it all in for a few oopsy-poopsies, believe me. This meant I was a wreck leading up to Halloween. It meant I missed a week of work. It meant that I was emotionally drained and depressed and vulnerable. I was ready for all the murder mayhem and mischief to very quickly go back in their boxes and back to the attic. I was ready for something lighthearted and fun. I was ready for Time Warner Cable's one-demand menu to drive me right off the deep end.

We have Time Warner Cable, and the on-demand menu is sort of like a DVR you can go into and watch recent shows (if you are not familiar with the concept) and movies, and the like. Some of it, like the prime-time programming, is free. Some of it, like recently released movies, you have to pay anywhere from 2 to 4 bucks to watch, and it's a 48 hour rental where you can watch it as often as you like during that period. Well they were selling the HECK out of this movie, "Much Ado About Nothing" by Joss Whedon. I had heard that he'd recently done a "secret movie" where he and all his friends got together and adapted a Shakespeare play to chill and relax between making all the money in the world from Avengers films.

Joss Whedon did this thing AT HIS HOUSE. It has Firefly captain Mal Reynolds, SHIELD agent Phil Coulson, and stoner dude Marty from that Cabin in the Woods in it. Also Chrissy Seaver from Growing Pains. So we rented it. Shakespeare kind-of sort-of invented the romantic comedy after all, and I needed to clean the depressed/sick right out of every fiber of my being. Here's the trailer:

Well, I watched it once with my wife. The Shakespearean dialogue was a little hard to translate at first... but I didn't do too bad, since I'm semi-familiar with Shakespeare from highschool (more on this in a bit), and some casual reading I'd done on my own, along with the Baz Luhrmann Romeo + Juliet viewings. Then I watched it again the next day by myself and found that I understood it perfectly. THAT was the magical viewing. One of the awesome things about the film is how casual Whedon's cast manages to make the dialogue sound. It hits the ear... for the most part... conversationally and natural. And I ended up LOVING it. 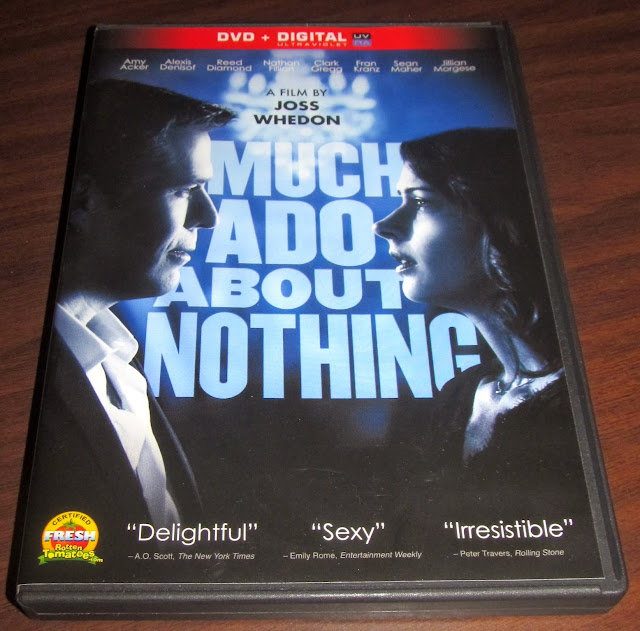 So I picked it up at Wal-Mart for 13.00 bucks and watched both commentary tracks one after the other. As of this writing I have watched the movie 4.5 times and the only reason I'm not watching it while I'm writing this RIGHT NOW is because I MADE myself lend it to a friend at work. I need to go call her right quick. BRB.

I have never seen the Kenneth Branagh version of the film... and I probably never will. I think Joss Whedon's treatment has ruined me for most other adaptations of Much Ado... and possibly for any other adaptations of Shakespeare tales in general. It also has a heartening 84% Fresh rating on Rotten Tomatoes, which I'm happy to see. 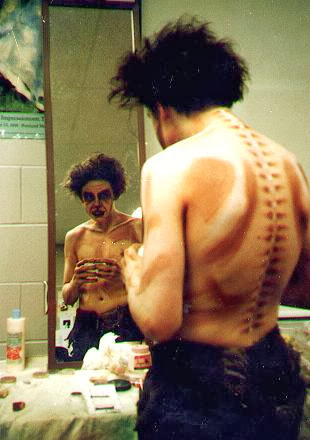 So who is THIS handsome devil? He's ME! I played Caliban in a high-school one-act competition production of the Tempest... and it is one of the most trans-formative experiences I have had in my entire life. Getting up on stage and snarling my way through my performance made me feel confidence I did not possess in those days.

And when Neil Gaiman included Will Shakespeare (and some of his works) in the Sandman mythos:

My lifelong love was cemented. A few years after my wife (then girlfriend) and I were in the Tempest together, (she played male villain "Antonio" as "Antonia" in our version) she bought me this because she loves me: 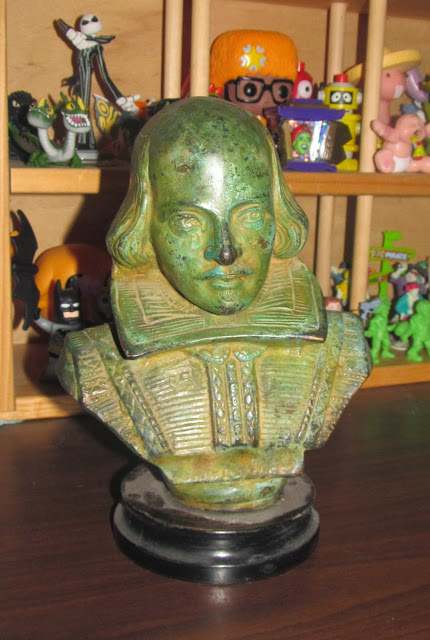 Which I still display with pride. And FINALLY... to actually tie all this in with an actual POST ABOUT GOODWILL... My recent viewing of "Much Ado About Nothing" has inspired me to start tracking down Shakespeare's plays. I want to find and read as many of them as I can and I want to do it on the cheap: 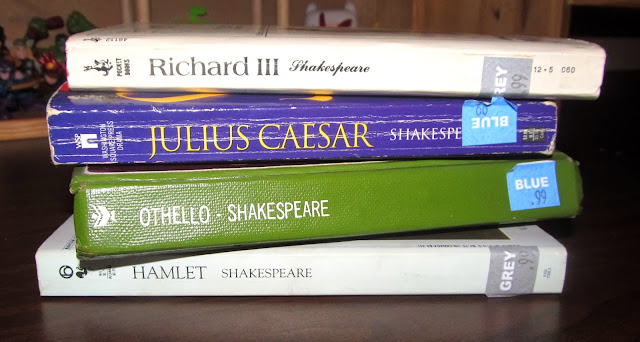 As you can see, I found all four of these plays for .99 cents. I've been seeing Shakespearean plays for sale second-hand FOREVER. Seems all people don't suddenly develop obsessions with the Bard the way I have. 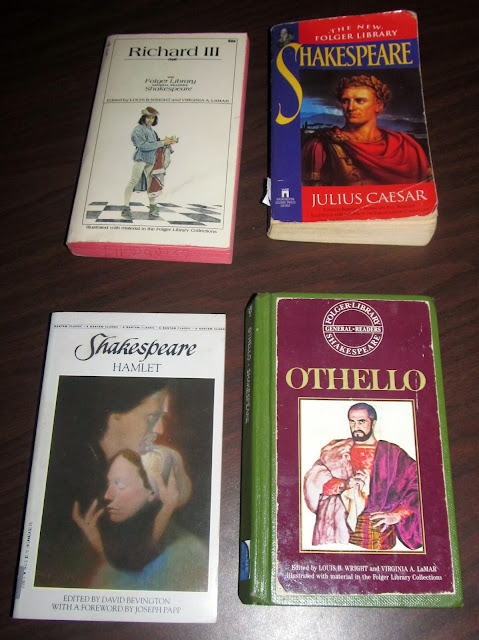 So here we have "Richard the III", "Julius Caesar", "Hamlet", and "Othello" to start off my collection. I want to avoid big collections of plays, unless they're smaller paperback collections, simply because I plan to read these on the bus while I'm commuting to work, and they need to be transportable. I'm not going to pretend I'm an expert at Shakespeare. I struggle with the language, but I also enjoy it as a puzzle to be interpreted. What I am mostly interested in is discovering where our modern-day stories take their root from. Shakespeare has influenced in some way or another almost all facets of pop-culture we currently enjoy whether we realize it or not (or want to admit it or not). 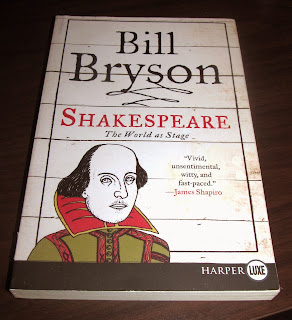 A couple of other recent finds involve ol' Willy as well. In Shakespeare: The World As Stage author Bill Bryson explores the truth behind Shakespeare's identity. There are many who question whether or not Shakespeare actually wrote his entire (or any of) catalogue of plays... or if the face we associate with him is truly his. This books looks intriguing to me, and I honestly can't wait to dip into it. This book cost me 1.99. 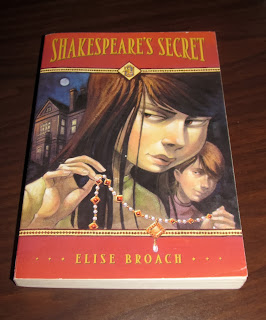 Finally, Shakespeare invades the YA market as well. This story tells the tale of a modern-day girl named for the "Much Ado About Nothing" character, Hero. She finds herself embroiled in a mystery spanning centuries, and involving jewels, and the famed Bard himself. I hope it does not suck. I paid .99 cents for this one though, so if it does I won't feel too bad.

So there! I finally wrote about something I've grown passionate about (or GEEKING out about!)... that I've bought at Goodwill (with the exception of the DVD). So there! I'll be back soon with even MORE Geeky Goodwill Goodies! Until then, Happy Hunting!
Posted by Derek Ash at 7:03 PM

Email ThisBlogThis!Share to TwitterShare to FacebookShare to Pinterest
Labels: books, Joss Whedon, Much Ado About Nothing, plays, Shakespeare