So I'm finally back doing League of Extraordinary Bloggers posts! Boy, It's been a while. A month I think? Not sure. It's been too long, and I'm glad to be getting back to it. Anyway, this week's topic? Let's take a look:

Next week, we gather to celebrate Thanksgiving. What are you thankful for this year?

I always have a hard time with this. I know what I'm thankful for as a family man:

1. My wife who is amazing, and creative, and loving, and amazing (yes she's THAT amazing).
2. My 3 healthy, wonderful kids, each one different and incredible in their own way.
3. The roof over my head. A house that is ours and that feels like HOME.
4. My job. Money coming in makes life easier and healthier. Money isn't everything, but it helps.
5. The rest of our family and friends who support us, and love us, and make us realize we're not alone.

But I've been saying those things for so long that it almost feels rote. Like it's a gut reaction, and expected. Of course I'm thankful for all those things. It's sort of cheating to roll out "the big guns" and not to mention something else. Make no mistake... I would not have a life without my family. I would be destroyed. It goes so much further beyond just being "thankful". My wife and my children are very much like air and water and food to me. Without them I would just cease. So I'm thankful for them, yes, but this shouldn't be news. It should be obvious in everything I say and do and in every aspect of how I live. These are the things to be treasured above all others.

5. I am thankful for New, Awesome Cartoons! Whether it's the new TMNT series, Gravity Falls, Wander Over Yonder, Adventure Time, Regular Show, or Steven Universe, I am thankful for what feels like a new age in animation. The shows listed above all are "for kids" but I enjoy them as an adult in a way that I know my kids are not able to yet. There is so much incredible, intelligent plot, dialogue,  and subtext going on there. Plus, show's like Bob's Burgers and American Dad continue to surprise me with their depth and cleverness as well. And with (semi) recent films like Wreck it Ralph and The Rise of the Guardians, I've been entertained at the theater as well! Seeing these cartoons isn't just a fascination with what's new or shiny... it's in the revelation that there are artists out there right NOW with my same sensibilities, creating cartoons not just for the next generation... but for ME (or at least, there's a subtext directed at me and my generation). 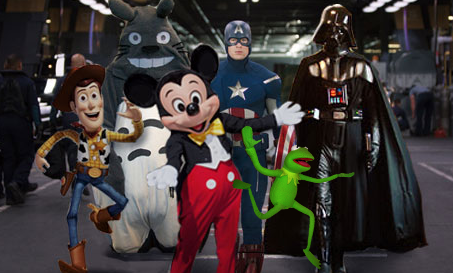 4. I am thankful for Disney. Let me explain. Because I love Star Wars, and the Muppets, and Pixar films, and Marvel comics... I now have one company out there that owns all of those brands under one umbrella. And because of that, all of those brands can continue to tell amazing stories. And so far... so good (the man falling past each window of the skyscraper was heard to say as he plummeted towards the sidewalk...)! The next series of Star Wars films actually kind of fill me with a new hope (swidt?) and the Marvel movie-verse is one that a decade ago I would never have even dreamed possible. But now, with Disney backing them up, we have one of the most lush, detailed, and involved series of movies I think the world has ever seen. Every film is capable of standing on its own... but they all share energy and inspiration and they seem to just keep getting it... right. The Muppets are reinvigorated with their own film series, and it's GOOD (well, we'll see if the new one coming out is... there's just so much potential for it to be truly AWESOME... I'll be crushed if it isn't) and while Pixar has had a few duds recently, they are still a force to be reckoned with. 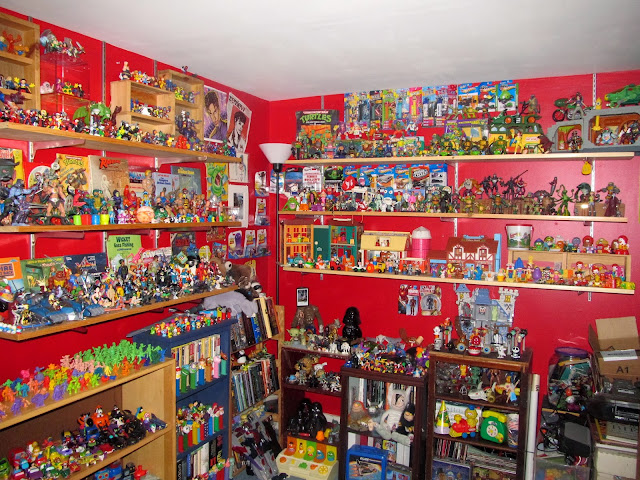 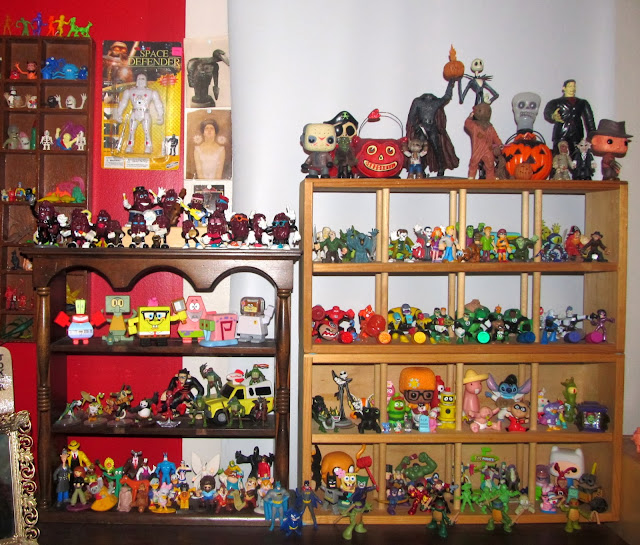 3. I am thankful for TOYS!!! Almost any kind of toys. Old or new. Vintage from 30 years ago or produced just last week. Doesn't matter. I live and breath cool toys. I like to get them on the cheap whenever possible, and I like them to perfectly reflect a property I like, or a nostalgic feeling I want to reproduce. I may not have owned Real Ghostbuster Mini-Mates as a child, but those toys perfectly embody the cartoon I loved as a kid almost BETTER than the actual dedicated toy-line ever did. I've mentioned before on here that I mainly obsess over mini-figures and action figures... but there's so much more than that. Toys keep me feeling alive. Not young exactly... because there's nothing more sobering than suddenly finding a Madball at Goodwill and holding it in your hands and realizing how LONG ago it was that you held anything like this in your hands the LAST time... But alive. They bring back memories of youth, and keep your interest in childish things alive. And for me, that's vital. 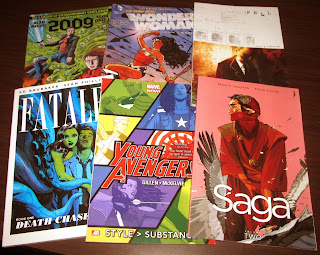 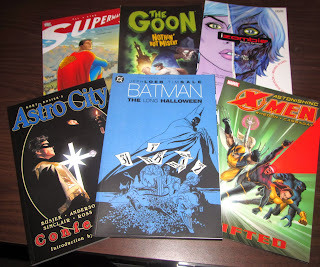 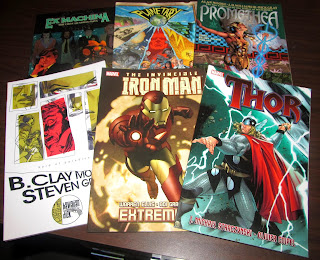 2. I am thankful for Good Comic Books. Well, these days, TPB collections and OGNs, but who's splitting hairs? I don't do a lot of collecting single issue floppies these days. I don't have the money or space for them. So I pick and choose carefully what stories I read and spend my almighty dollars on. Luckily, the "good" comic book story is still out there, buried in the morass of company-wide crossover events. And no, they aren't all hipster indie comics with no spandex in sight. Some stories take a tried-but-true trope and turn it on its head, or find a new way of telling an old story, or find new ways of breathing new life into old characters. A lot of the books I feature in the pictures above aren't even that recent... but they're worth tracking down and checking out. I am thankful for the existence of stories that still do the format proud... and for the re-readability of those stories. If nuclear winter hits tomorrow I can crawl into my bunker with my TPB collection and read until the radiation finally seeps in and transforms me. 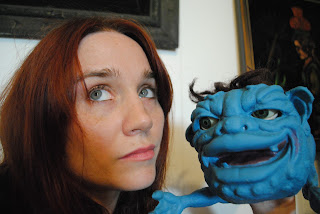 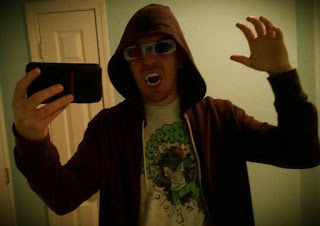 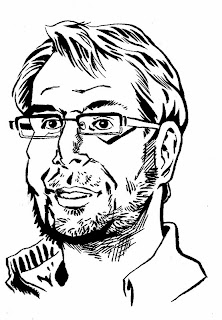 1. I am Thankful for The Blogging Community. I have literally been writing this post ALL week long. I started it on Monday. And I will be posting it a few hours before Monday. I want to write something elegant and touching about how much I am Thankful about the blogging community I have come to be a part of. But words are failing me and I'm tired. I know so many people that I would just never have known before this. I have connected with a handful in a way that I would almost consider friendship. I've come to find a lot of peace and quiet as I trawl the internet for posts on pop-culture and collectibles. I was quiet and reserved in high-school until I got on stage in drama-club and it forced me to be open in a new way that I didn't know was possible. Writing this blog and meeting all the other bloggers out there has opened me up and given me confidence in other ways I didn't know possible. I am, quite frankly, a mess some days. A human only barely capable of acting semi-sane and competent. Why I am allowed to have a family is just... beyond me some days. What I take from the blog-o-sphere is that I am not the only one who feels this way. There's something about writing online in these little electronic journals that we sometimes pretend are about toy-collecting, or movie reviewing, or memories of the olden days... something that makes us open up and look for validation. And seeing others out there trying to do the same as me, and interacting with each other... that is something I'm truly Thankful for. The pictures you see above are only a very tiny sliver of the community I have come to know and love. But they are shining examples. I personally thank Brian over at Cool and Collected for starting up the League of Extraordinary Bloggers for my involvement in the community, because without the League, I would not have started this blog. He also gives us meaningful stuff to write about week after week, which is a nice change from the crap I bring home from Goodwill. And of course, I am thankful to every single person out there that takes the time to check this blog out, read it every once in a while, or even follow it. It makes me feel like I'm not just shouting into a void. So... thanks.

Anyway... this has gone on long enough. I'm curious to see what the rest of the League is Thankful for this week:

- Dex over at the consistently excellent AEIOU and Sometimes Why blog is thankful for many of the same things I hold dear.

- G.I. Jigsaw sings his thankful praises to the powers behind a certain galaxy far, far away.

- Mason's list over at D.I. Treasures is also pretty great, and full of a lot of the same things I'm thankful for as well.

- Primordial Badger is ALSO thankful for a bunch of stuff that I agree with!

- Retro Robot Review also has a lengthy list of worthy values! And it's the first League submission over there! Welcome to the League!

- There are some really great things to be grateful for coming out of the Nerd Nook as well!

- And finally, our Fearless Leader Brian, of Cool and Collected, is thankful for the support he's gotten from the online community as well, especially where it concerns his recent passion project.

Well... that's it for me folks. I am EXHAUSTED. I have a weird work week ahead of me, and then a BLISSFUL vacation. Hopefully I won't be sick for it. SO expect a little bit of blogging to happen starting right after Thanksgiving is done. I'll be back with some Geeky Goodwill Goodies soon enough! Until then, Happy Hunting!
Posted by Derek Ash at 7:37 PM