Doubling Up: It's a Goocher!

(Quick note about the title of this post: My wife has gotten me using the term "It's a Goocher!" all the time now. She purposefully uses it wrong to make me point this fact out to her. It is a quote from one of our shared favorite movies. I have purposefully used the term wrong here as well. That is all.) 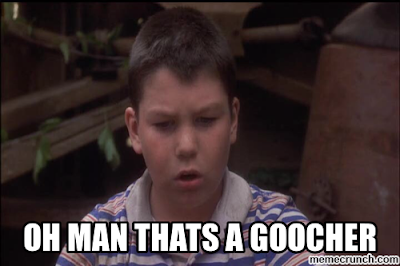 So just when I think I'm ready to embrace 2015 fully, I find some set of pictures that I took of stuff I bought back in 2014 and just never got around to talking about. I'm sooo behind. And now, I've decided I'm going to double up on a few posts because I want there to be a bit more content if I'm going to ask you all to come here and waste time reading about some of the stuff I've picked up at Goodwill. So this post has two... count-them-TWO posts for the price of one! 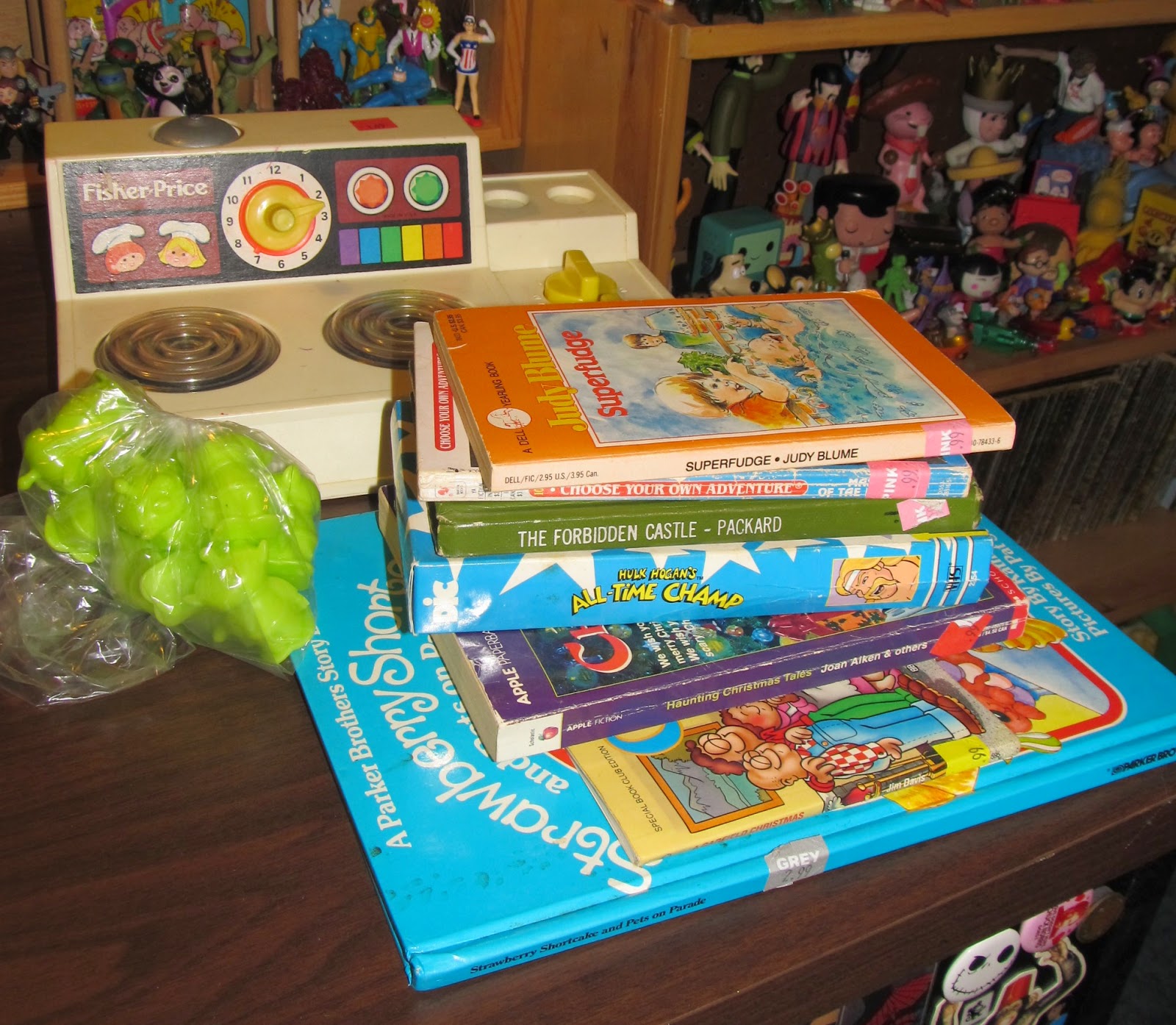 So above you can see the first of two collection shots. Say it with me kids: Let's take a closer look, shall we? 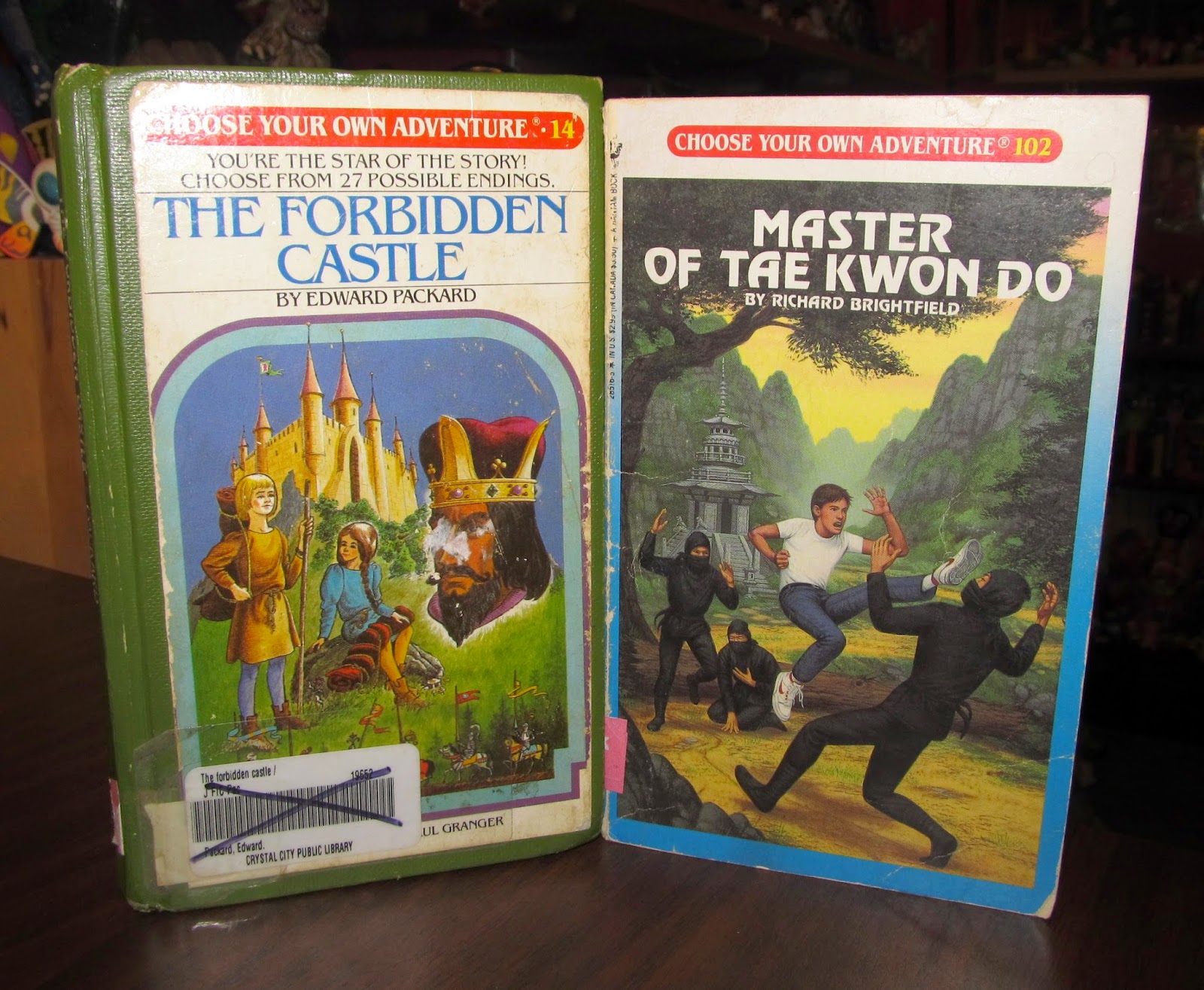 First up I found a hardcover library-copy of "The Forbidden Castle" and a soft cover copy of the hilarious-looking "Master of Tae Kwon Do." Both of these are Choose Your Own Adventure Books, and as most longtime readers (If I have those. Do I have those? Yeah, I have a couple at least. Thanks guys.) know, are a must-pick-up for me. Although... I've slowed down a bit on the CYOA collecting in the last few months. I pretty much just pick up gaming books with either Horror themes or ones starring pop culture licences, or ones that have some sort of awesome gimmick I've never seen before. So... there's my life story. You're welcome. 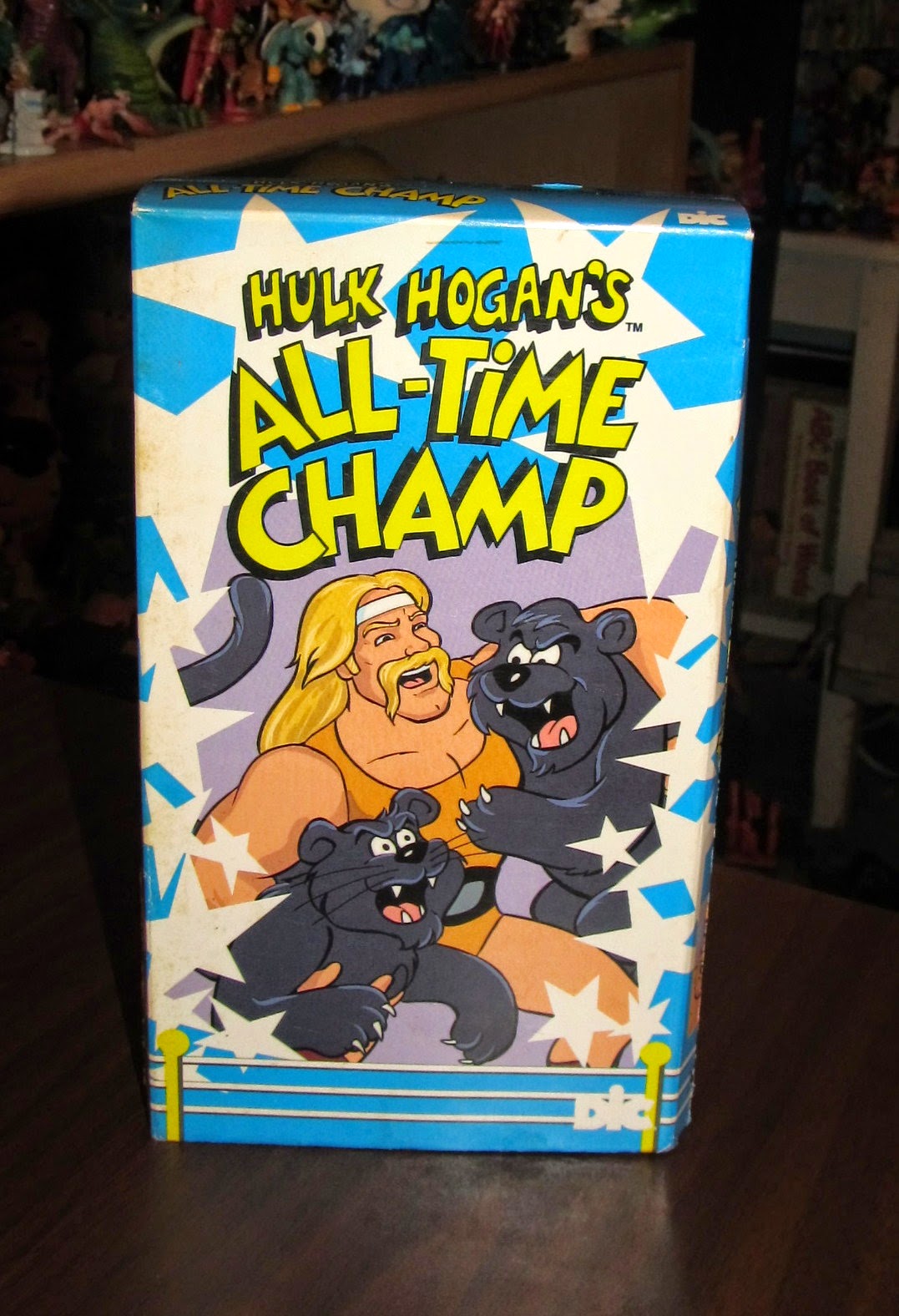 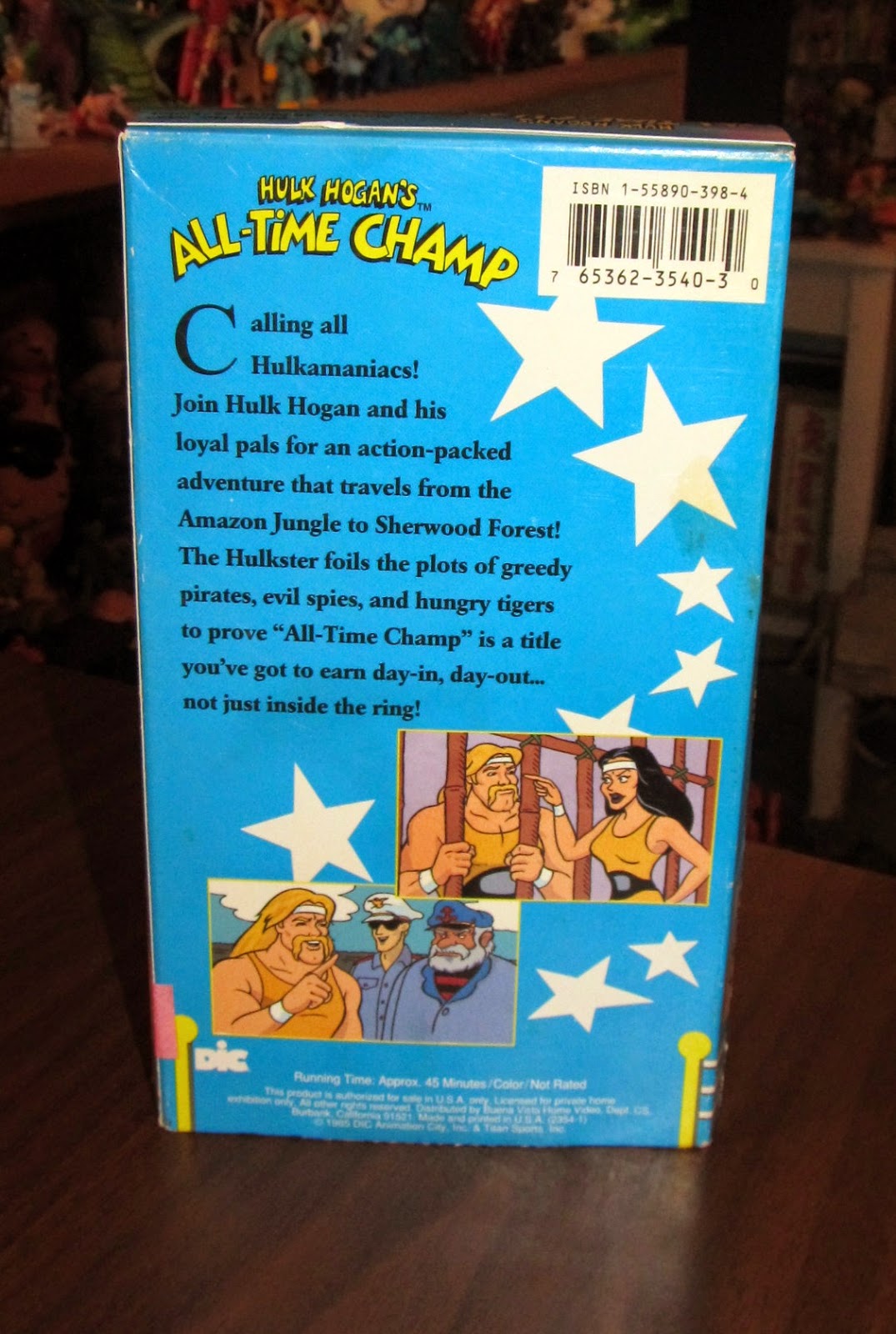 The world may be mad at Hulk Hogan right now, but I can never stay mad at ANIMATED Hulk Hogan! Either way my feelings towards him don't really matter as I picked this up for a friend because as you know: I DON'T COLLECT VHS. 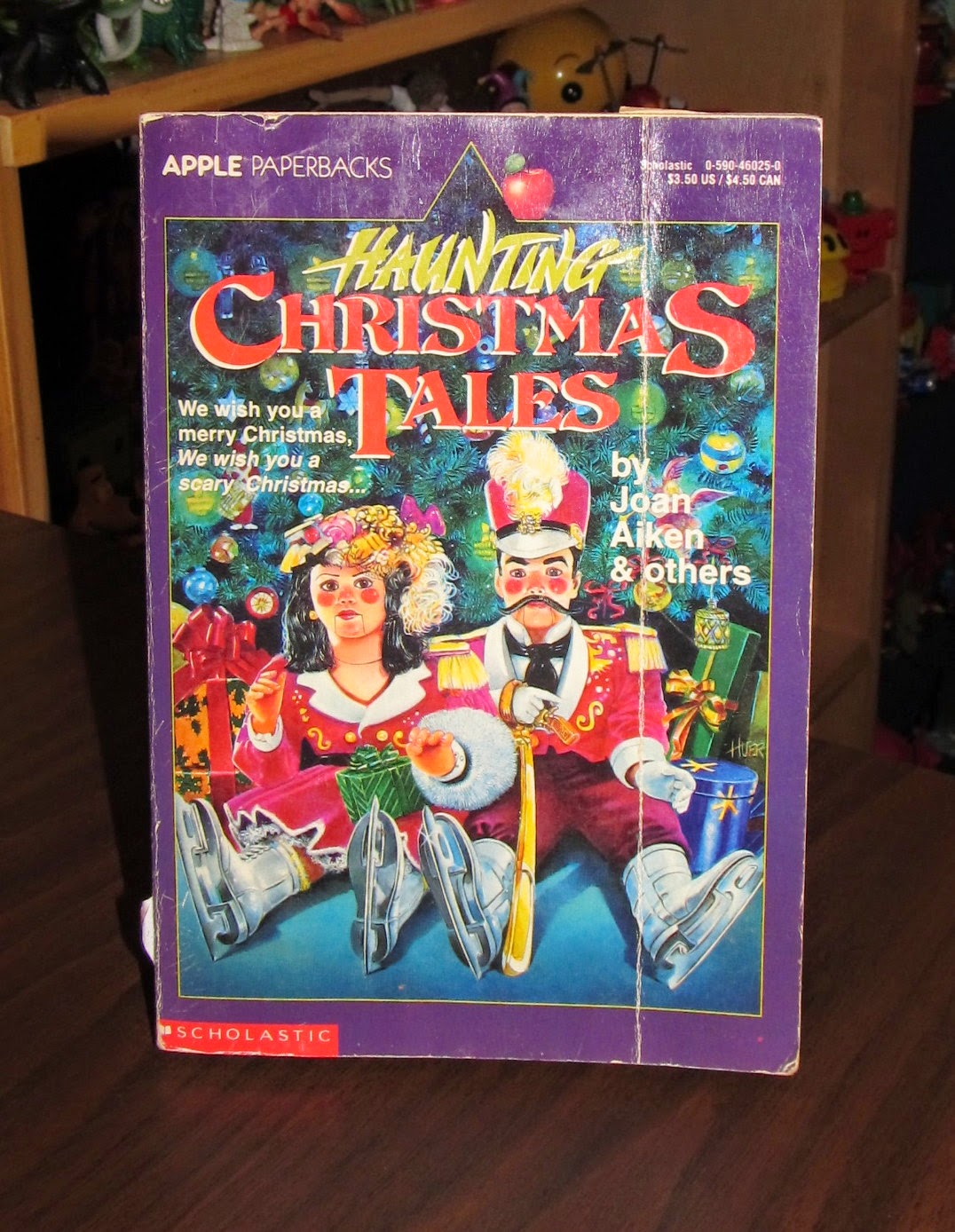 This is one of the books that inspired me to do last year's Creepmas celebration. That should give you some idea of how old this all is. Unfortunately, I STILL have not read this book. Don't know if I EVER will. After Halloween season gets done, I'm hard pressed to read anything creepy for a while. I'm kicking off August with my Halloween Read Pile. I will have been reading creepy books for three months straight by the time Halloween gets over with. I will be pretty much done... but I might make an exception this time around. 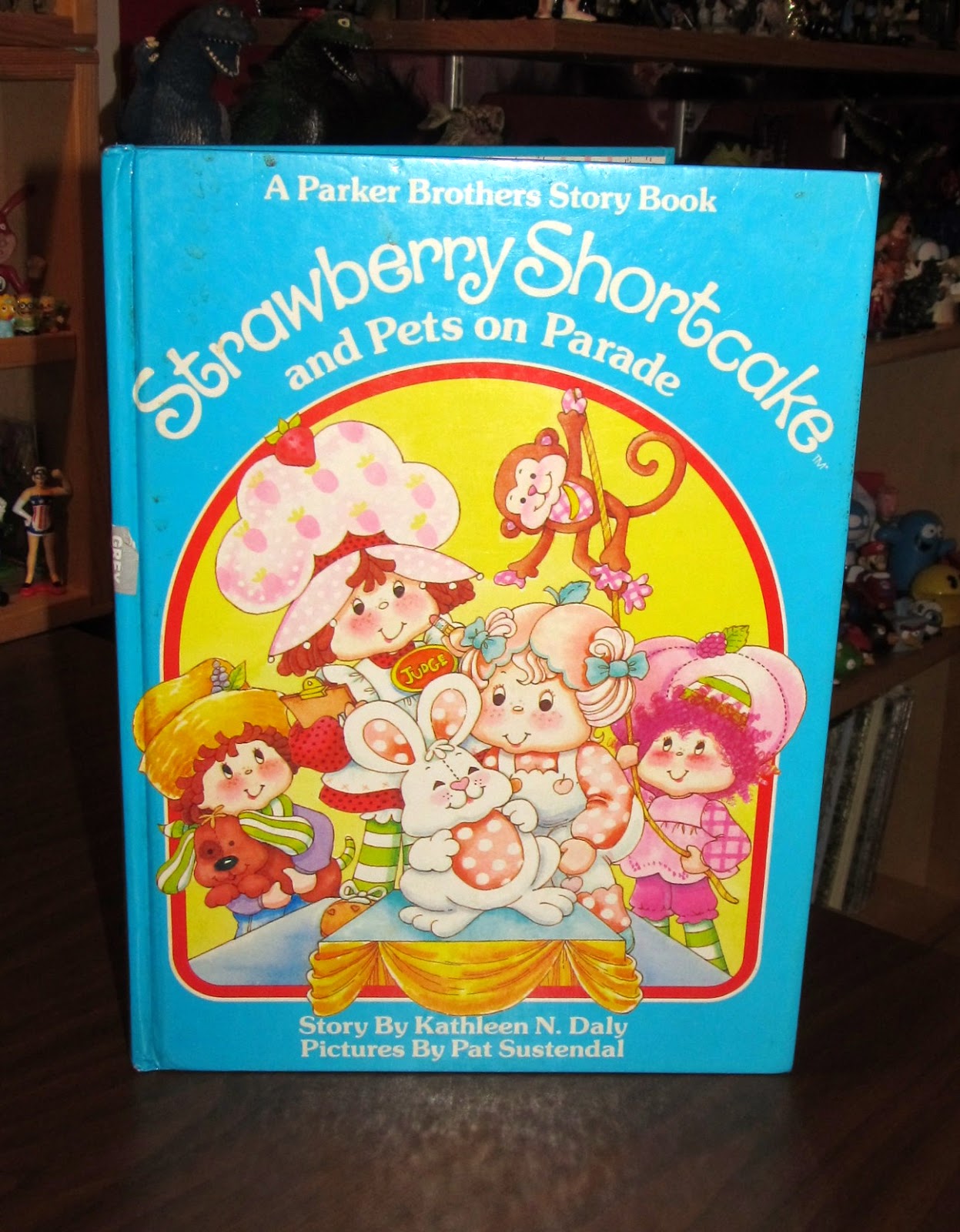 I don't collect Strawberry Shortcake toys or books myself, but I still can't leave them behind when I find them! This one I believe got lost in the mail on the way to a dear friend. It's a shame. But c'est la vie. 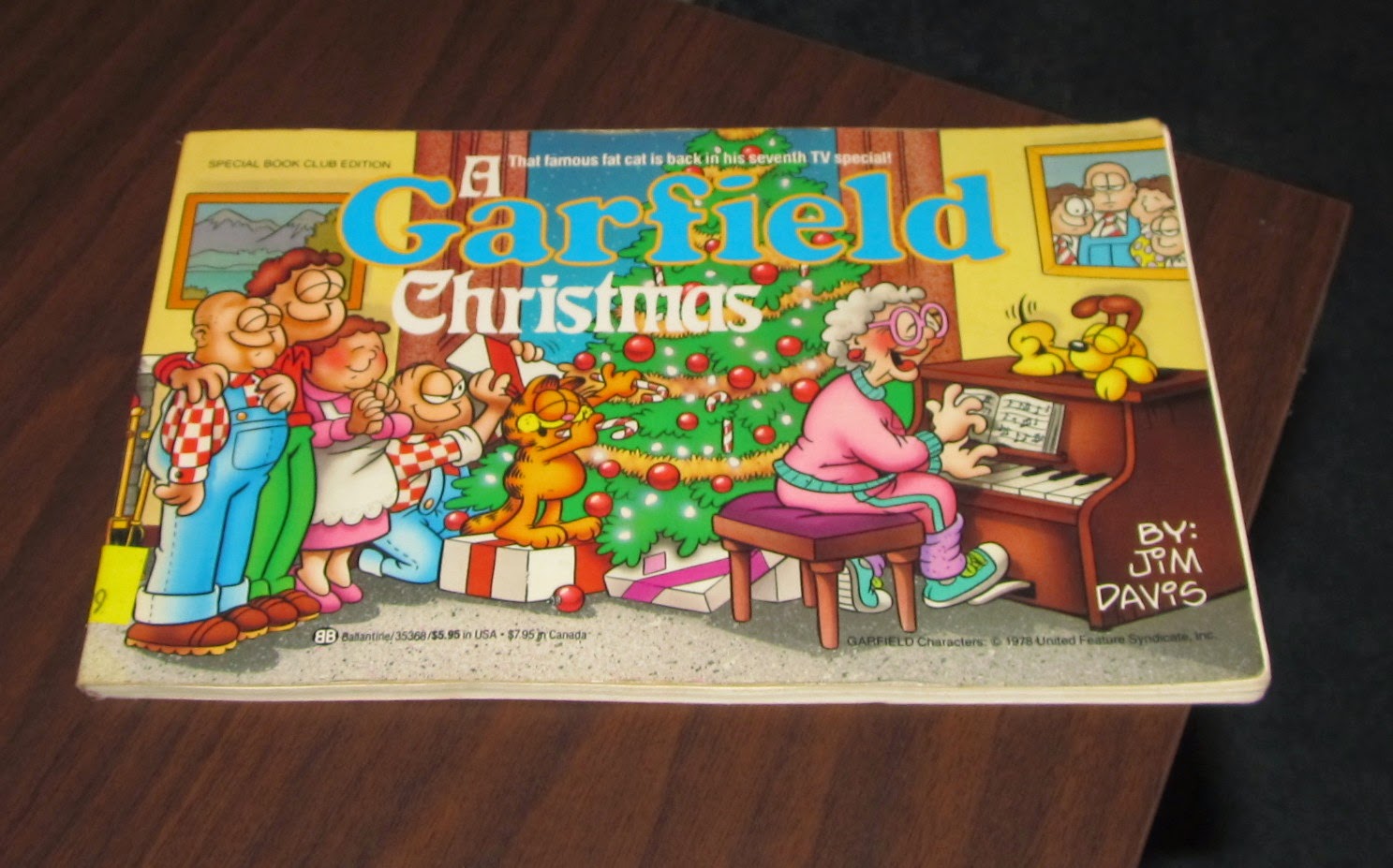 I believe this was my second copy of Garfield's Christmas. I found the first copy in a used bookstore in Rockland, ME for a little it more money. I picked this one up too so I'd have a copy to give away to Adam Nori of "Who Ya Gonna Collect?" fame! I loooove Garfield Holiday specials, pretty much more than any other holiday specials. I will never not buy this book if I find it. 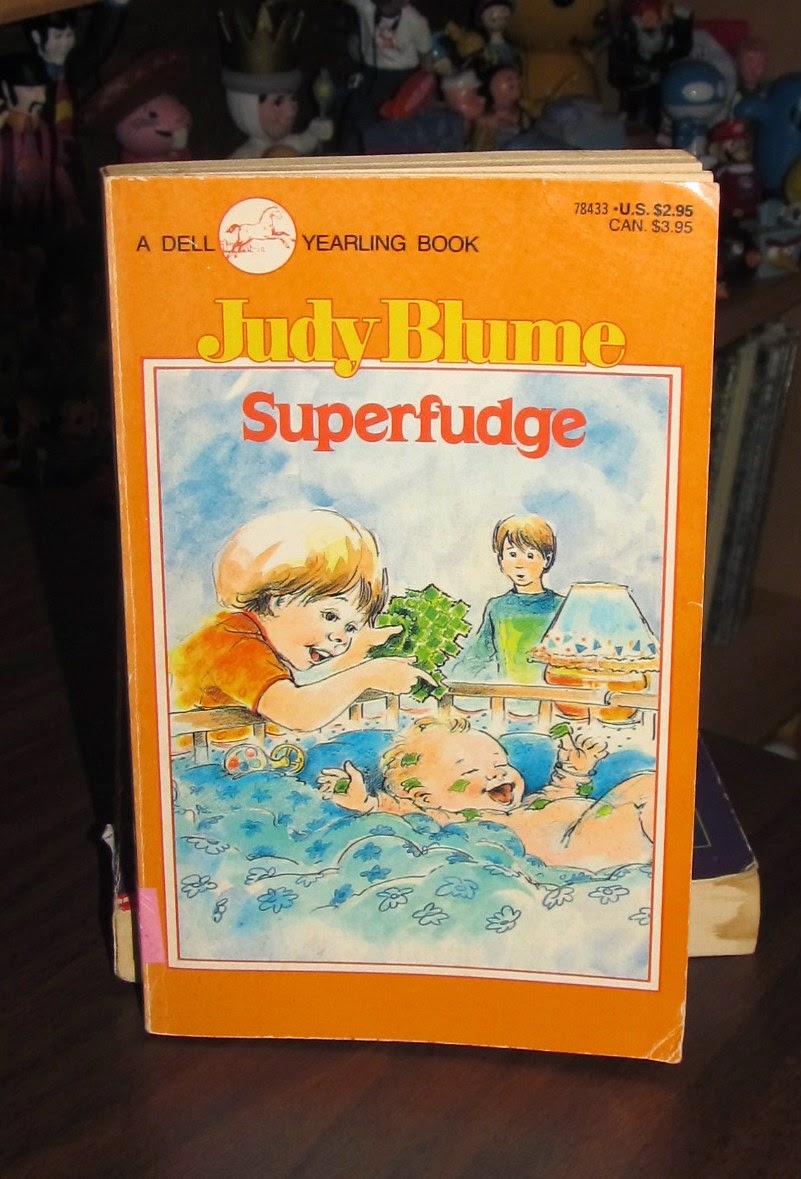 My wife has asked me to start tracking down chapter books from our childhood last summer. Judy Blume has a lot of great 80s era books out there as well that she wanted me to find. So far we have "Fudge-A-Mania," "Tales of a Fourth Grade Nothing," and "Otherwise Known as Sheila the Great," which all take place in the same literary "world." "Superfudge" was the last one we needed. 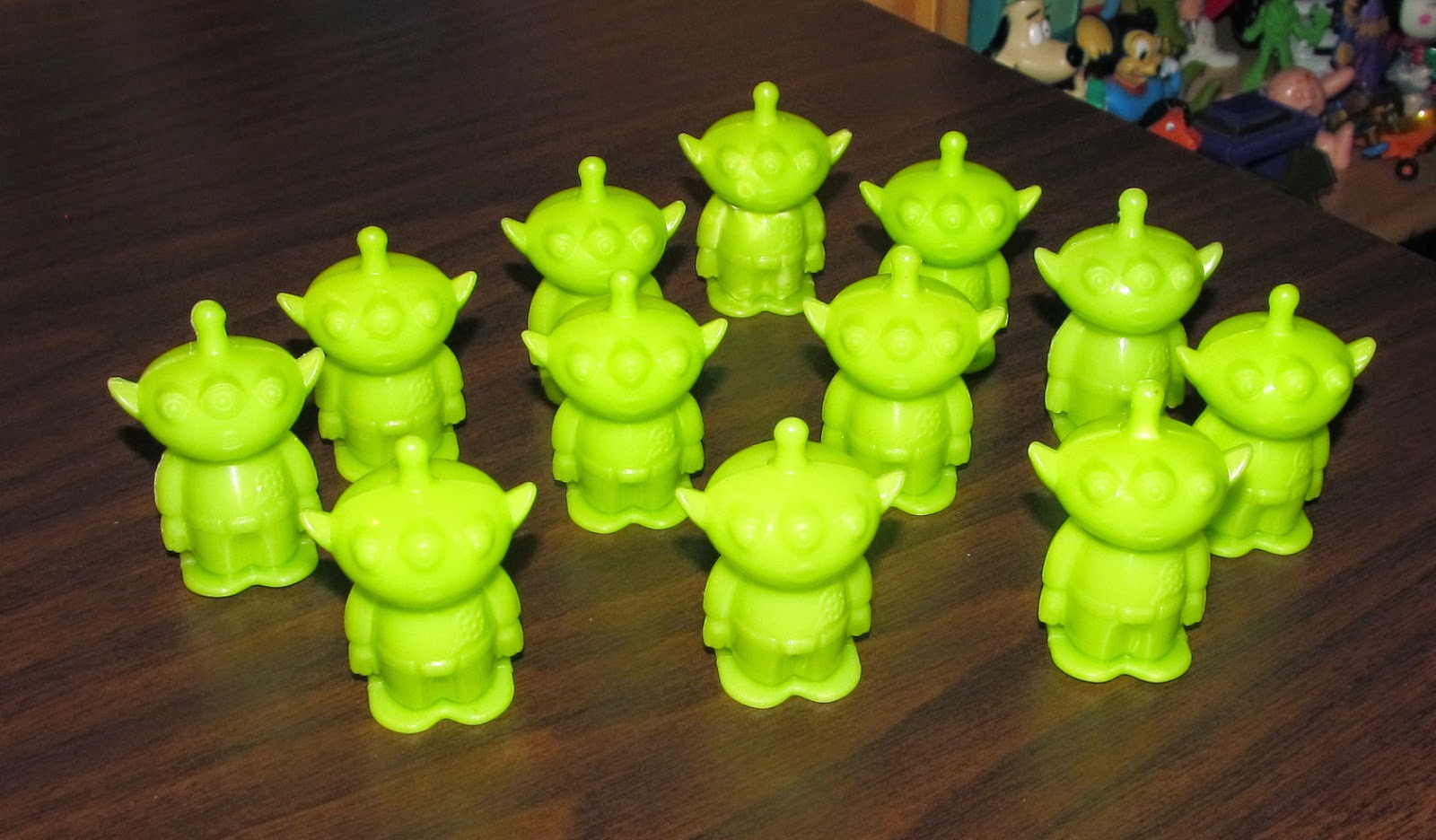 Since I gave away all of the E.T. figures I showed off in the very first blog post, I thought I might use these Toy Story aliens to take their place. But then I didn't end up doing that... and now I couldn't even tell you where these all even ended up. No earthly (or unearthly I guess) idea. 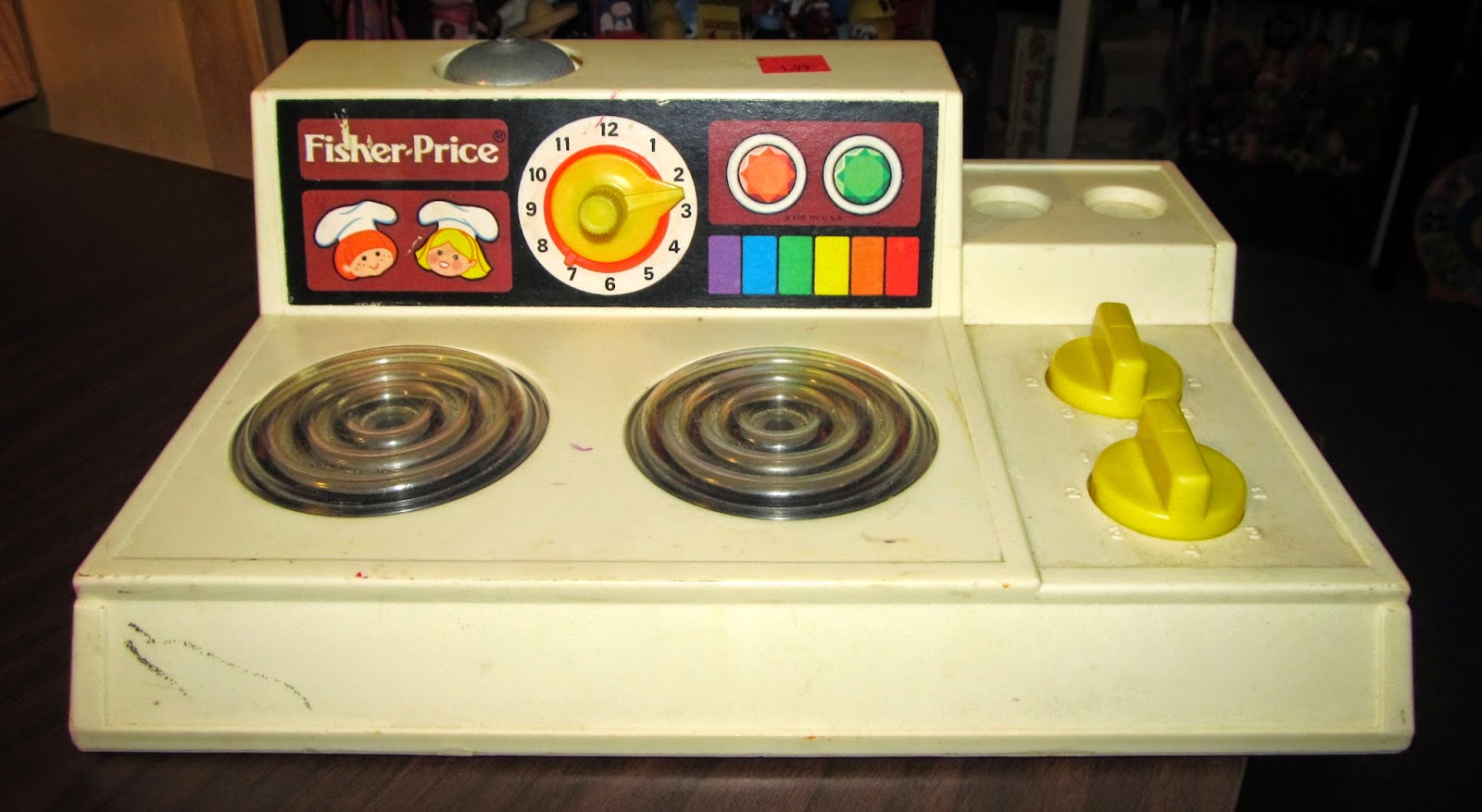 The piece de resistance in this particular haul was this Fisher Price Kitchen! I am almost sure that I owned one of these as a kid... but I couldn't swear to it in a court of law or anything. This thing is missing absolutely ALL of its accessories. Which, meh... I'm fine with that. I kind of wish it had the little salt and pepper shakers... but maybe I'll find some stand-ins that are even better than the real things.

All right! This is normally where I would be done and I'd do the tagline and we'd see each other in a few days... BUT NOW MORE STUFF!!! 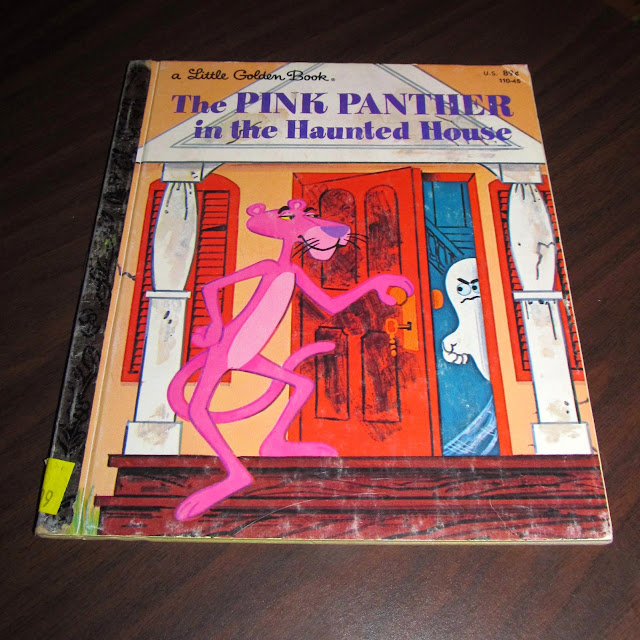 "The Pink Panther in the Haunted House" was a fun addition to the Halloween shelf, although I think since this was probably in November or so, it won't be read for the first time in our house until this Halloween. I remember owning at least one Pink Panther book as a kid, and I think this was it. 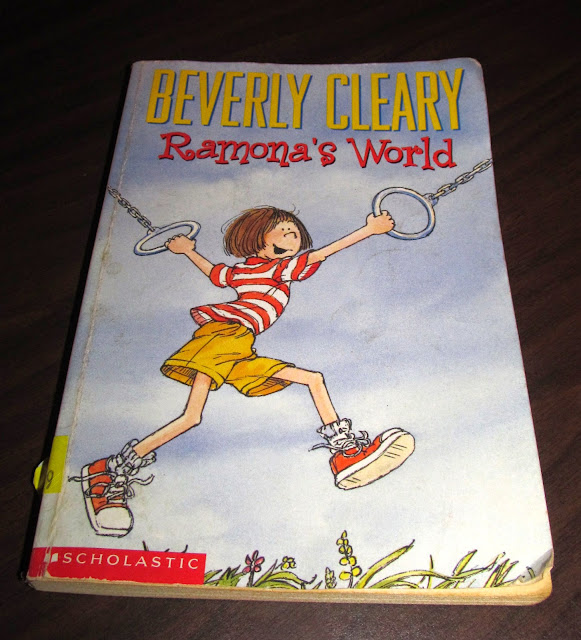 We've talked about why I'm on the lookout for Ramona books already. This was before I was looking specifically for the Joanne Scribner covers, so I have probably already gotten rid of this copy in favor for one with her artwork on the cover. This one by Alan Tigreen doesn't do it for me. It's a little too evocative of Lynn Johnston's For Better or Worse Strips. 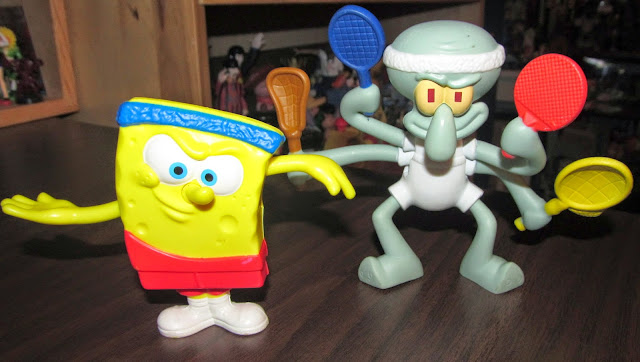 There was a big ol' grab-bag on this trip too! As usual, you might notice from the group shot above that I've omitted some of the stuff I just don't care about. I was ESPECIALLY excited however, to find this Squidward in the bag! Spongebob's nice too, but I love this Squidward with his Kali-esque assortment of athletic-equipment-armed arms. That sweat band is a nice touch too. 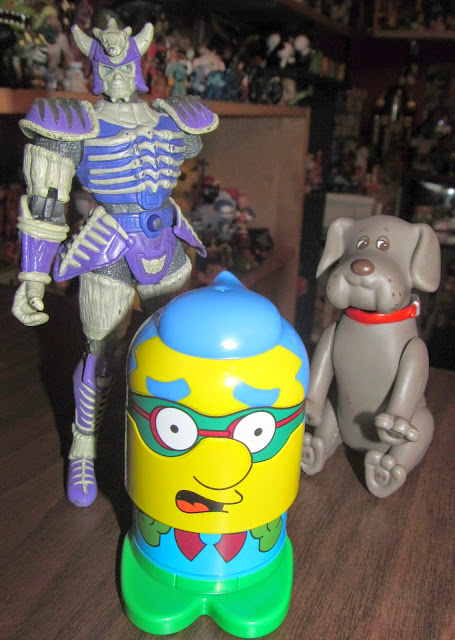 Check out this triple threat. We have an Ice Master from The Mystic Knights of Tir Na Nog. I had no idea this show was a thing. Apparently it was Power Rangers in ancient Ireland or something? Anyway, this guy's missing an arm. It's too bad, because I kind of love him in a "I desperately want to be Skeletor" kind of way. We also have Milhouse as Fallout Boy from the Burger King series of weird superhero figures that a) had weird bodies that telescoped inside themselves until you popped the open and b) interacted with your computer webcam somehow. There was a set of five of these guys, but I let this one go on to a new home as the rest of the set doesn't really entice me much. And Finally a Pound Puppy Poseable! This is the "Mutt" figure from that line, which came out in 1985. This is another item sent to a friend. 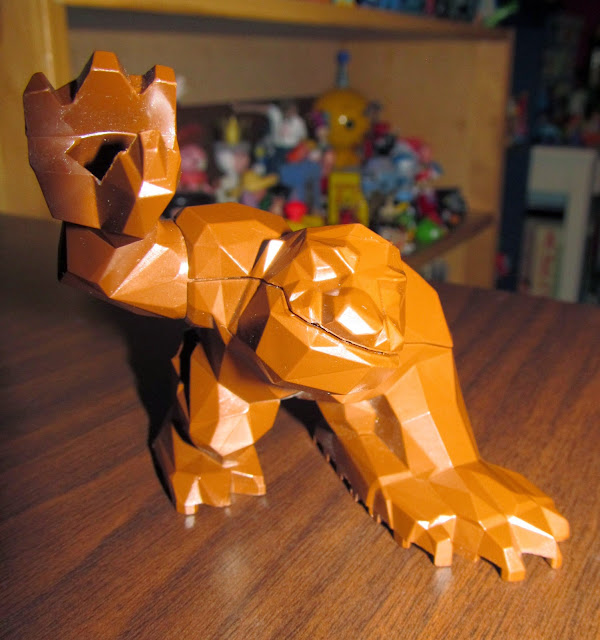 I had a HECK of a time figuring this one out! I knew this rock monster was definitely LEGO, and that I LOVED it... But what was it from? My first impression was that it was some sort of frozen-in-stone troll figure from the Hobbit or something... but that turned out to be wrong. It turned out instead to literally be a LEGO "Rock Monster" from the "Rock Raiders" line, which was apparently only around from 1999-2000. This guy stands (or crouches, or whatever it's doing...) on my LEGO minifigures shelf with pride! 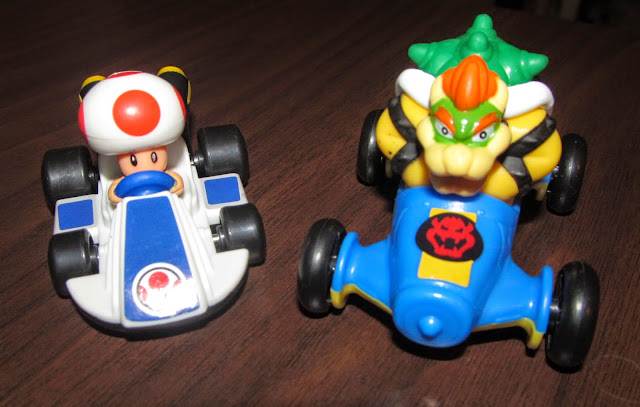 These Mario Kart racers were inherited by my Mario-crazy sons (I was collecting Mario stuff for a while, but ended up giving almost ALL of it to the kids after too long). 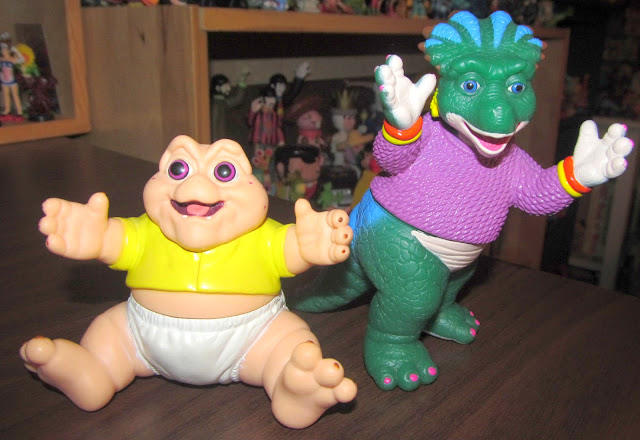 Truly the items that impressed me the most (and the major reason why I picked up this grab-bag in the first place...) are these Dinosaurs action figures! Originally there was a set of 6 of these guys, including (inexplicably) Earl's boss, B.P. Richfield. I have had a love/hate relationship with "Dinosaurs" over the years, which has finally, comfortably, settled into "love".

Well that's it guys! You got your two-fer! I'll be back soon with more Geeky Goodwill Goodies, so until that fateful day... Happy Hunting!
Posted by Derek Ash at 7:28 PM