Hey! Here's some stuff I think I actually bought sometime this year! There's an almost-but-not-quite-theme running through this post... with a couple of significant exceptions that greatly just f--k things up for me trying to write this.

GEE THANKS A LOT, AWESOME STUFF I FOUND. 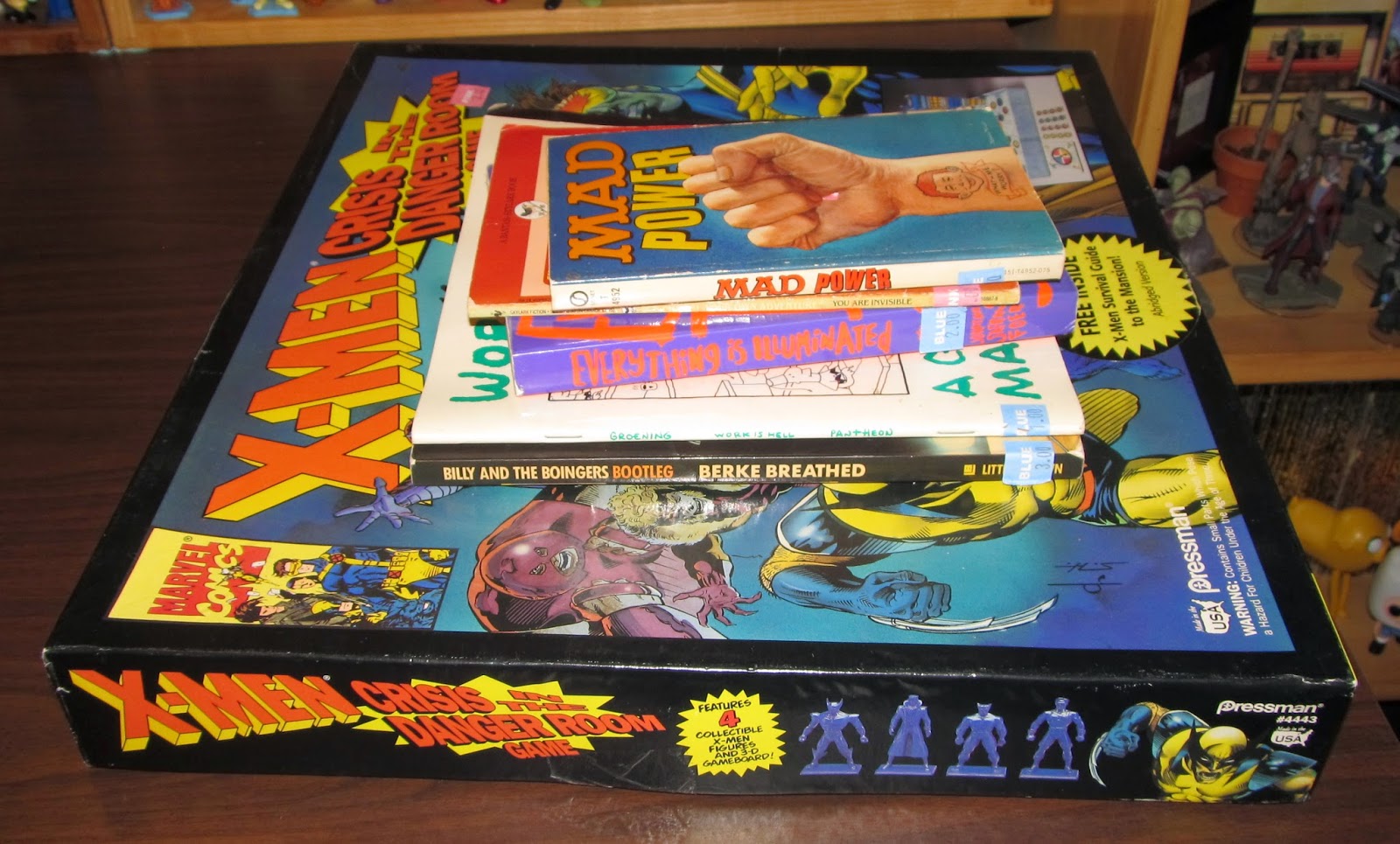 Well here it all is. As you can see, there's some pretty fun stuff in this pile. Let's get started so we can get with the fun... right? 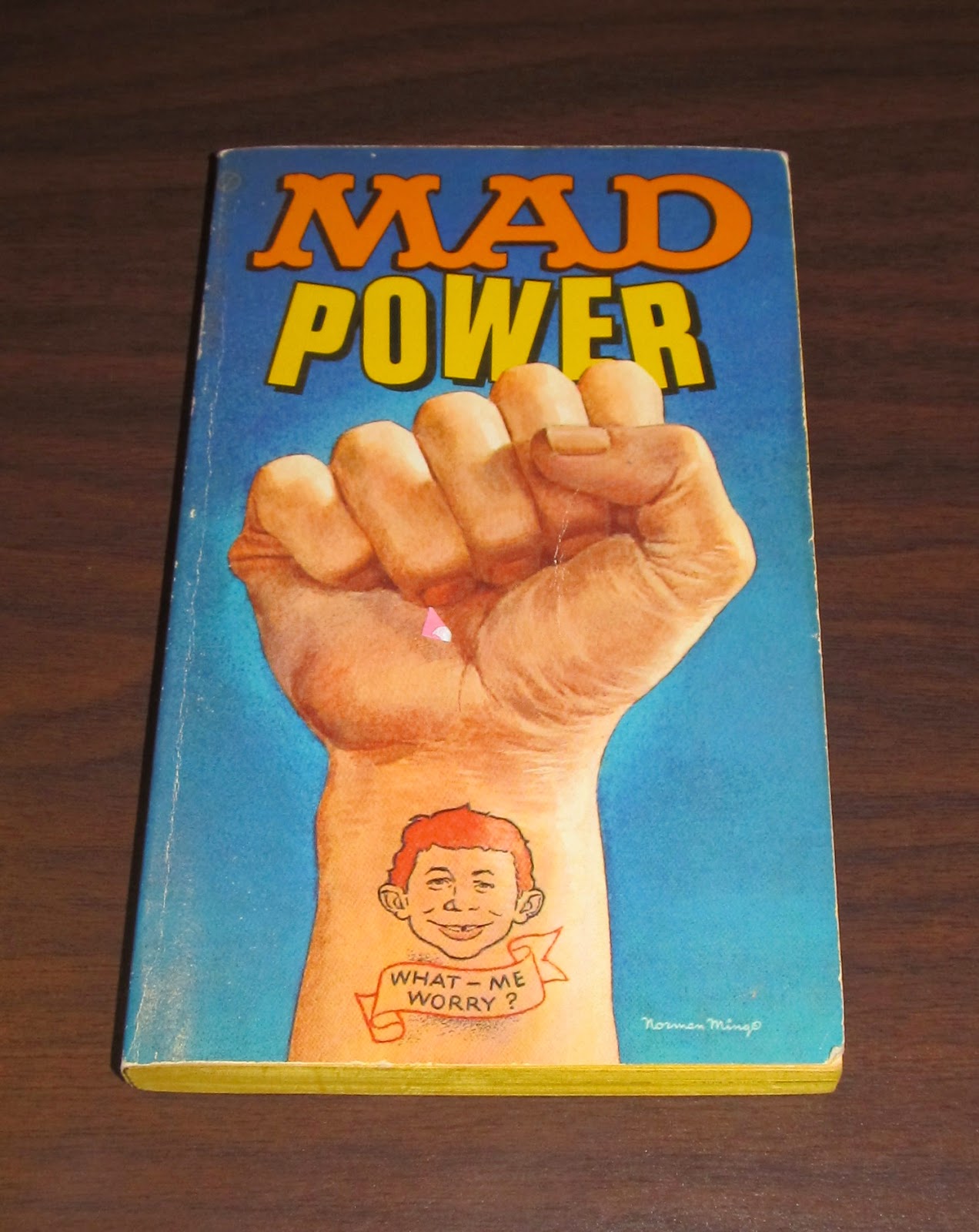 So, based on the stuff I found in this haul, the theme I thought I'd go with was "Funny Books and Comic Books" and for the most part, I succeed. This MAD Power book is one of those rare gems that I love to find: A MAD Magazine comics print collection. These are ALWAYS a sure take-home item for me. 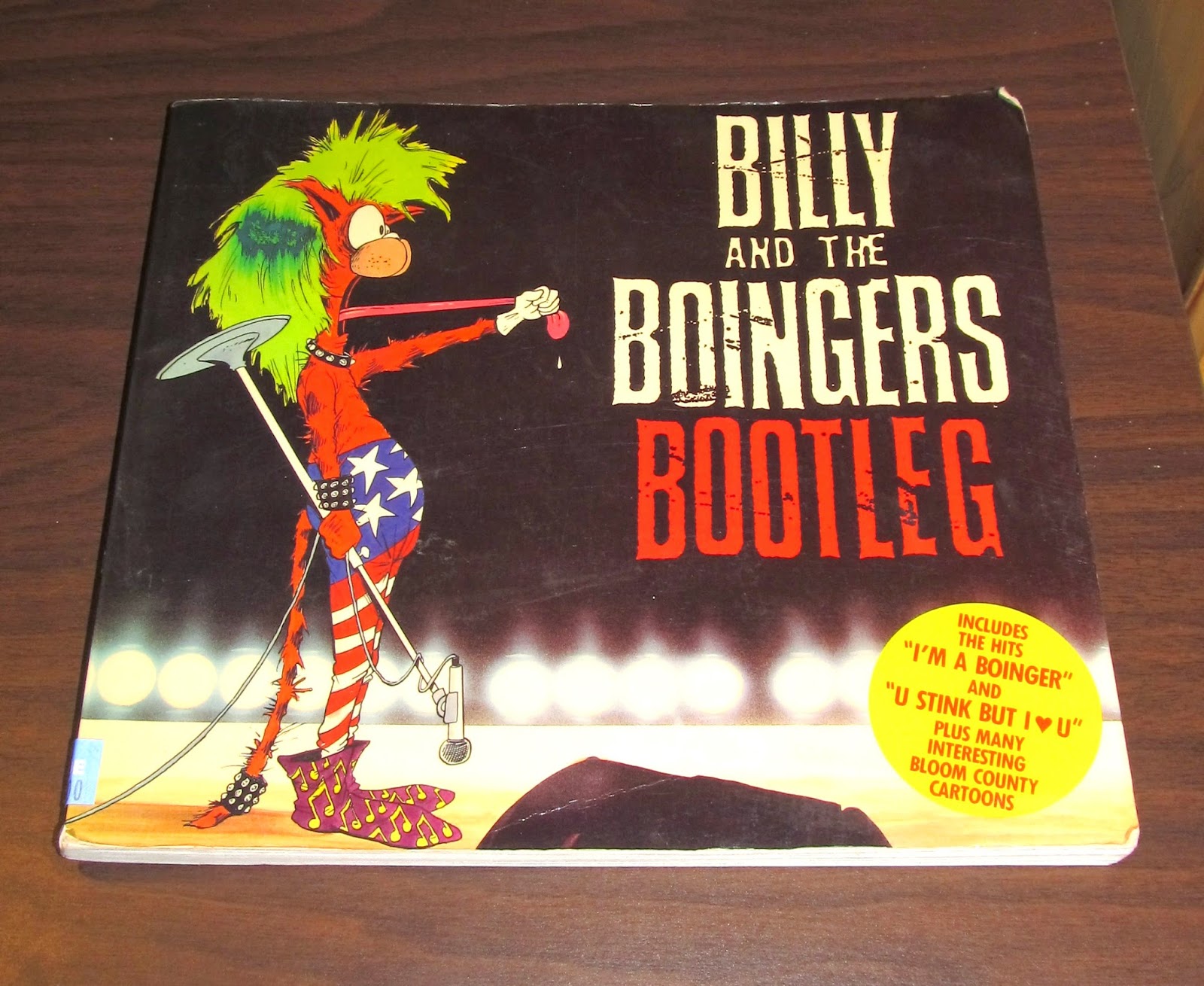 The holy triumvirate of 80's newspaper funnies for me are "Calvin & Hobbes," "The Farside," and "Bloom County" (along with "Outland" and "Opus" which are just continuations of Bloom really). While I am a fun of Garfield, it's mostly his animated adventures that catch my attention. Although many a happy hour were spent as a child poring over my Aunt's VAST Garfield collection, which included EVERY Garfield stri ever collected in book form.

What was I talking about?

Oh yeah! Bloom County! This copy of Billy and the Boingers Bootleg still has the plastic record-sheet inside that came with every copy of this book.


Here. Give it a listen. 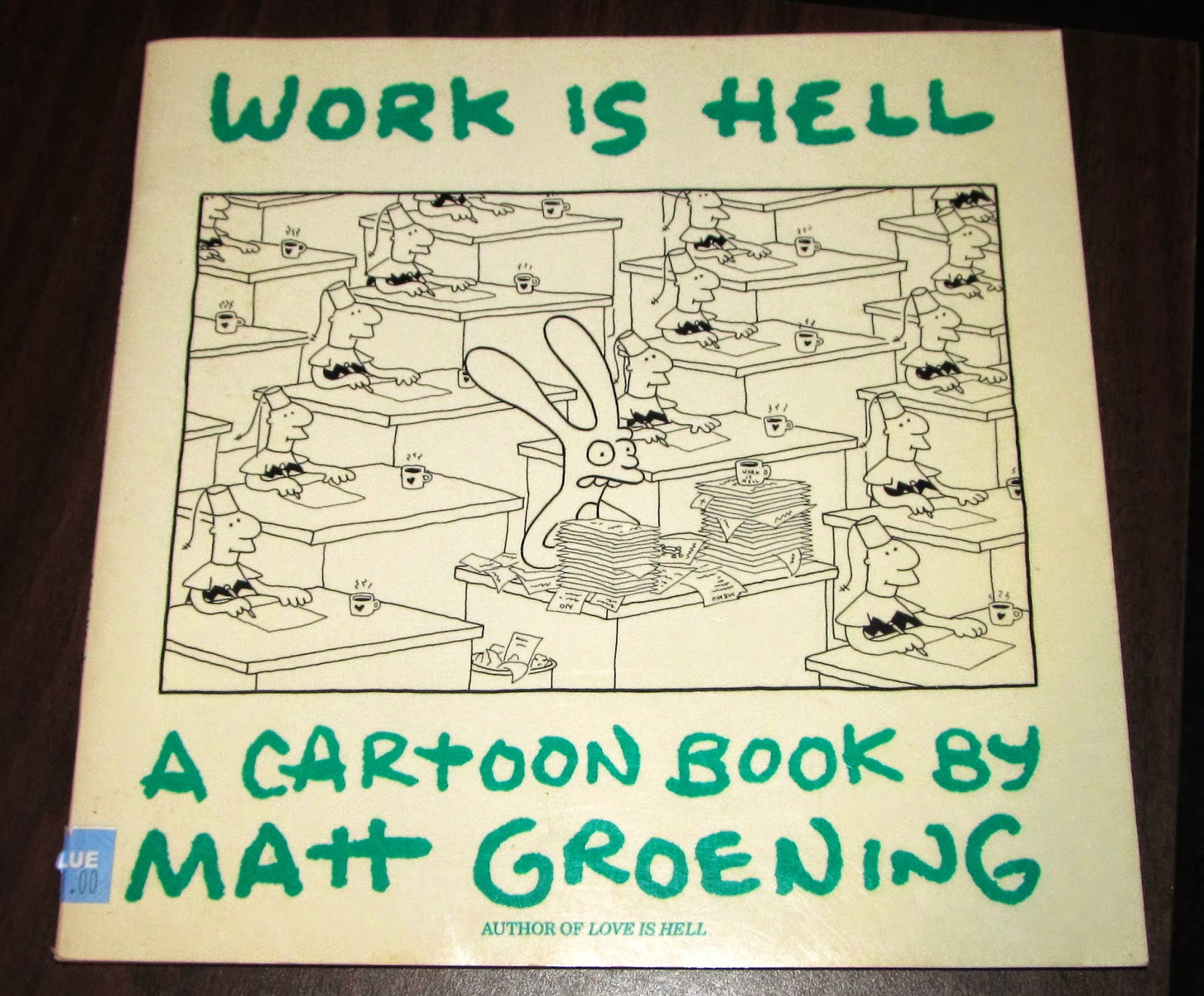 The last book in the pile that without a doubt, unquestionably follows the theme that I am more than a little bit unhealthily obsessed with tonight is this one. Work is Hell by Matt Groening of "The Simpsons" fame. Many do know, but just as many don't know that Groening did a series of funny books back in the 80's starring a bunny named Binky and his zany cohorts, Sheba, Bongo, Ackbar and Jeff. I find these strips fantastically amusing, so any opportunity I have to pick some up for cheap is... a good opportunity that I take right away. Huh. Not sure where I was going with that, but I'm pretty sure it wasn't where it actually ended up. Anyway... I like this book! 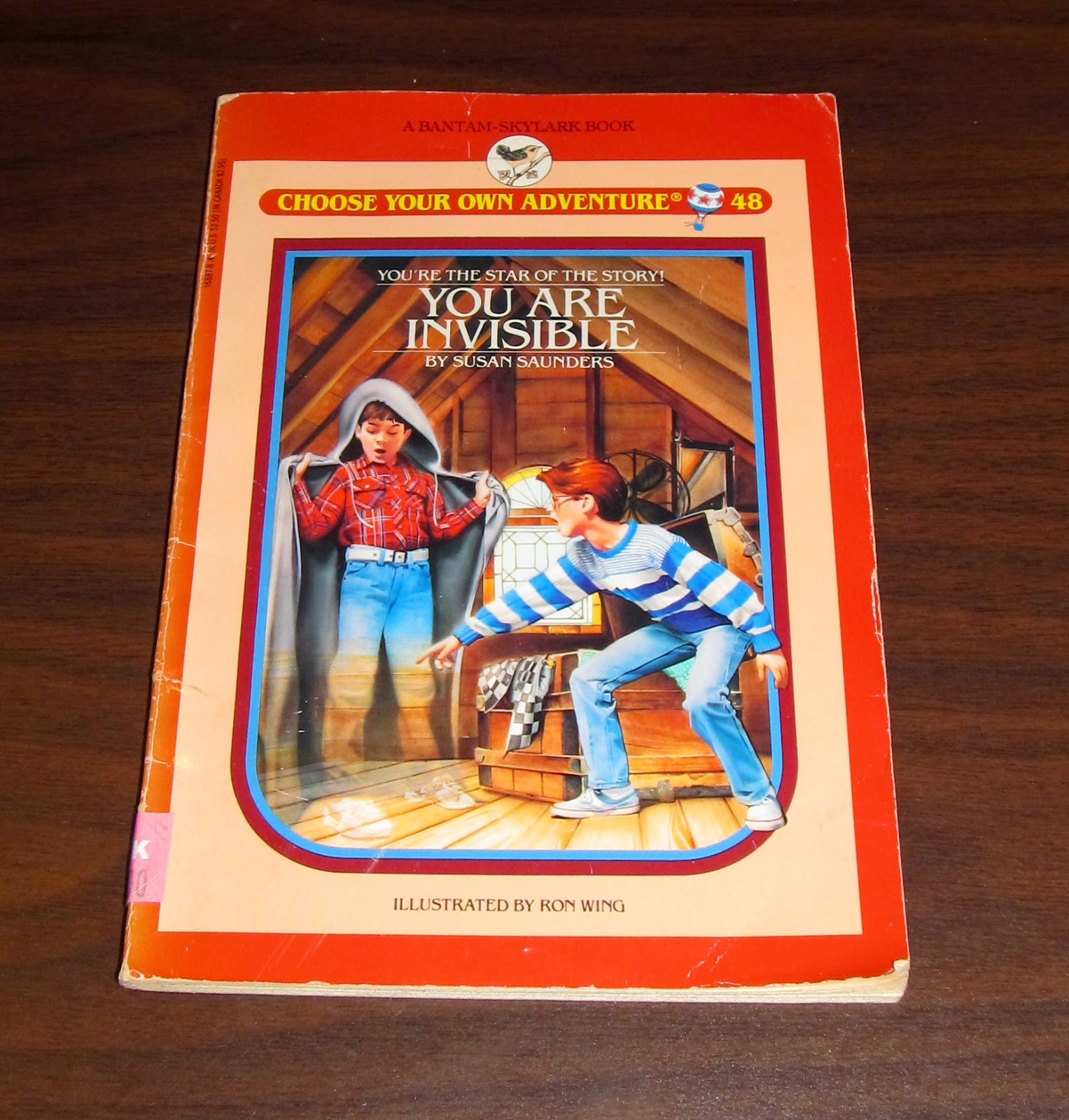 All right... my theme starts to get a bit shaky here. With Choose Your Own Adventure book You Are Invisible we could TECHNICALLY argue that the kids in this young-reader book by Susan Saunders actually have COMIC BOOK superpowers... but I'm not really going to fight that hard to convince you, honestly. These younger-aimed CYOA's are actually a LOT of fun. 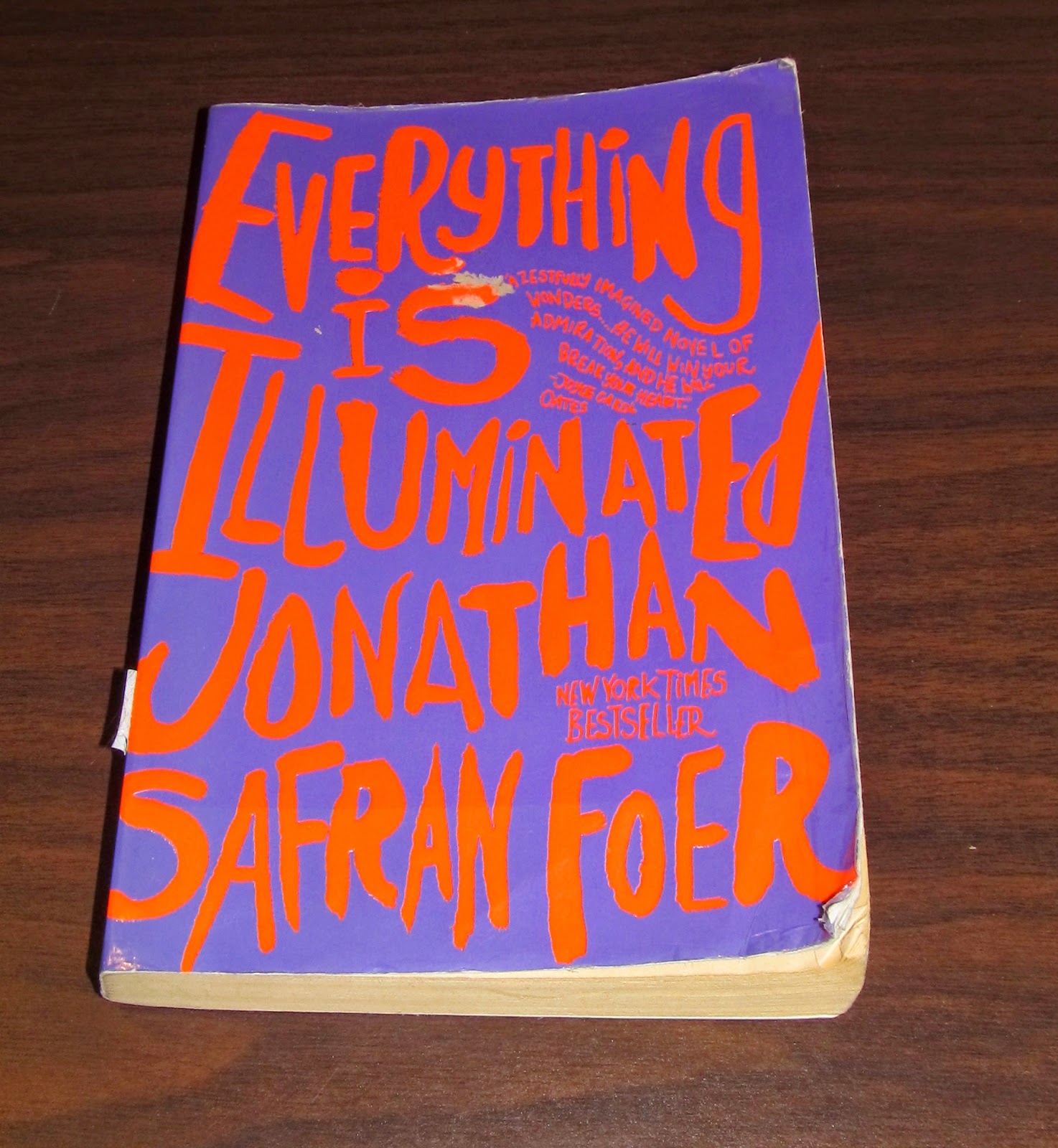 I really love the film based on Everything is Illuminated by Safran Foer, but I've never read the book. Here I also want to point out that I have abandoned my theme entirely. But we'll get back to it. The movie of Illuminated came out in 2005 and starred Elijah Wood. It is wondrous, heartbreaking, ethereal and yet groundedly REAL at the same time. I hope the book is as good. I've been let down in some cases, so I hope this isn't one of those times. 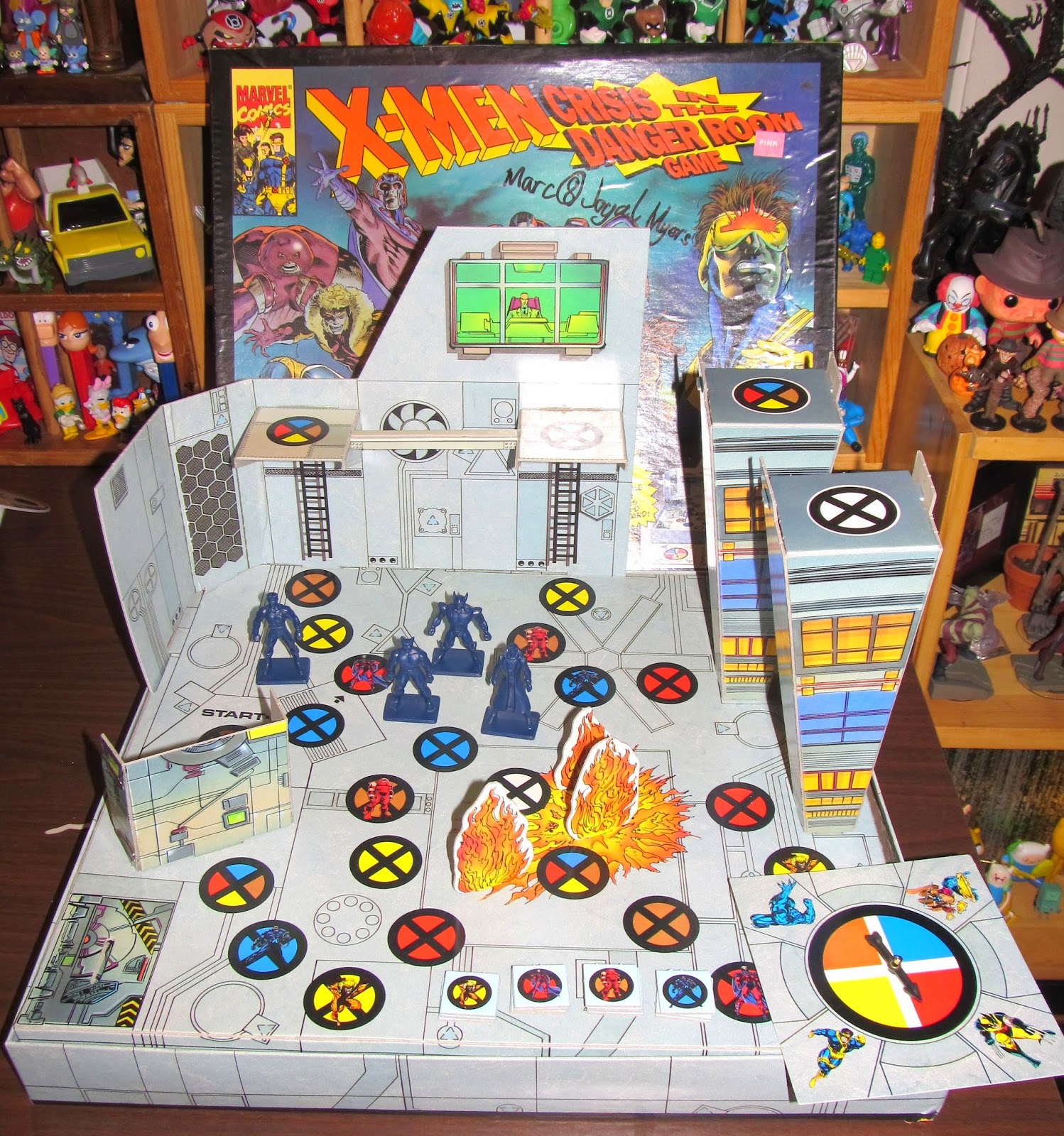 Finally we have this "X-Men: Crisis in the Danger Room" board game, that had me picking my jaw up off the floor when I spotted it! Almost all of the pieces and tokens are present and accounted for, and the construction of the Danger Room play area is intact and fairly easy to construct. 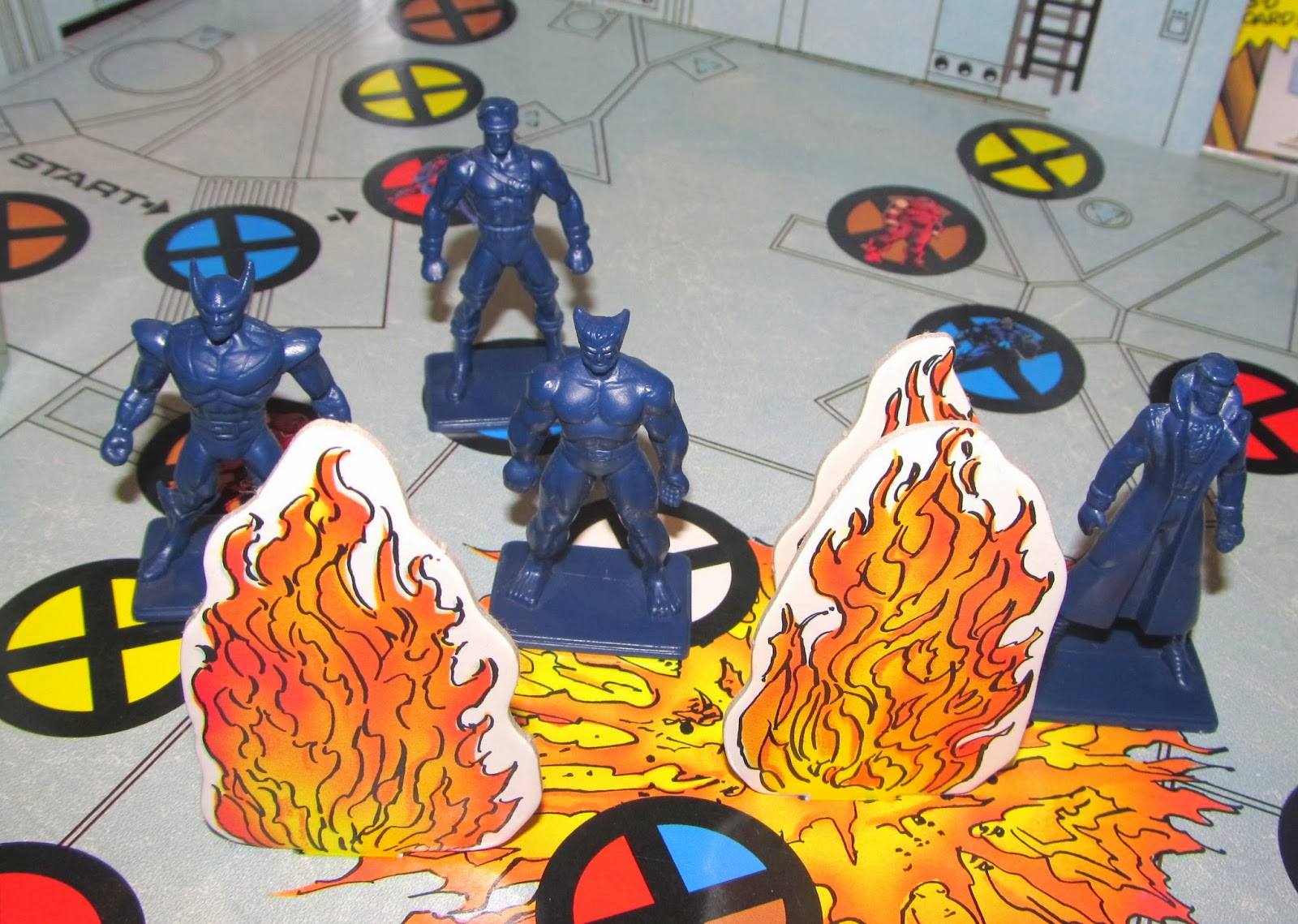 The game includes pawns of Wolverine, Cyclops, Beast, and Gambit. I cry foul that Storm or even Rogue or Psylocke were not also included... but c'est la vie I guess. It would also have been nice to see Cyclops touching his visor, readying himself to fire his optic blasts... but I guess I'm just a stickler that way... 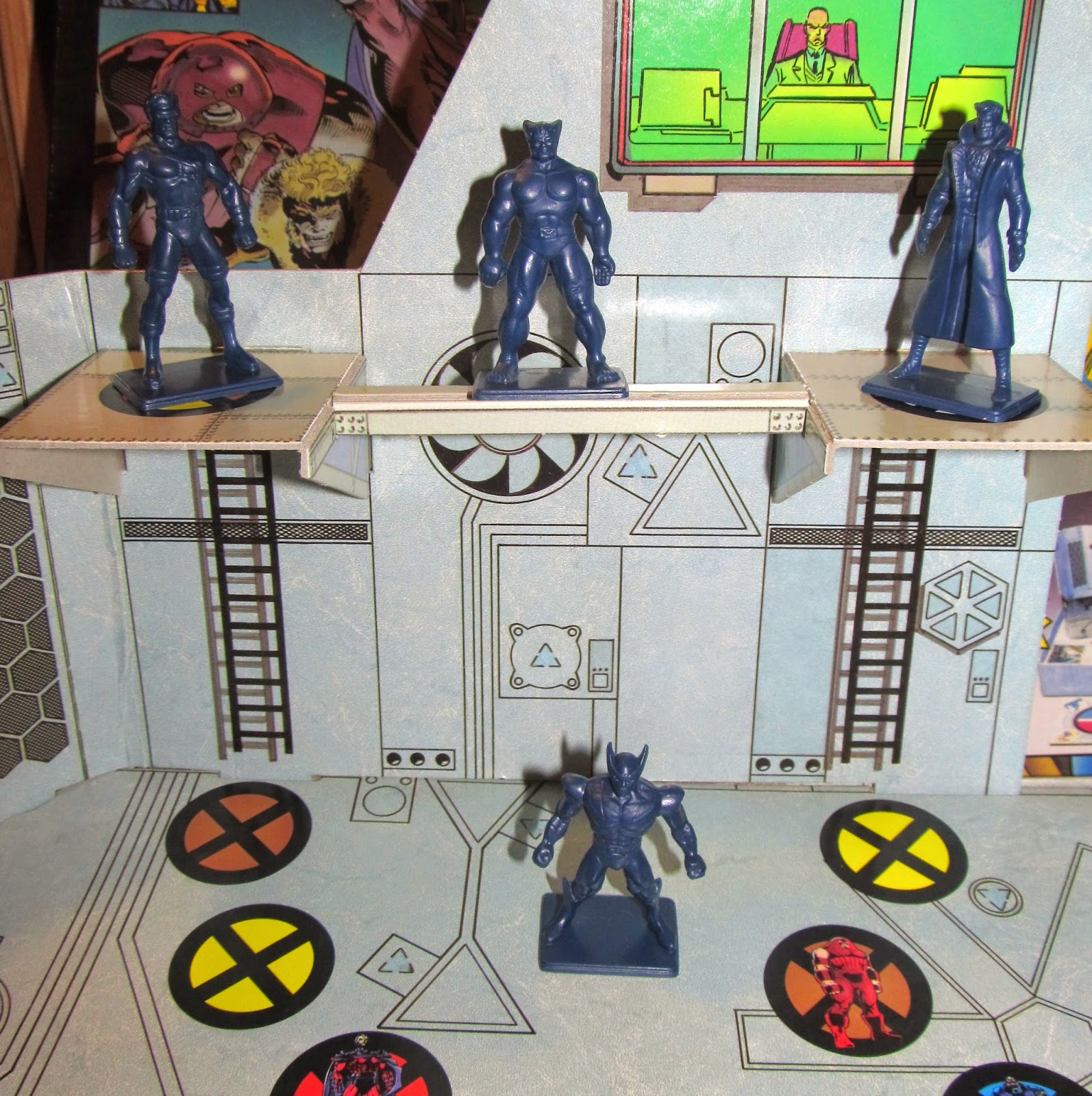 This is one epic build of a board game! The platforms and balance beam still go in nice and snug, and look great put together! I love that we get Professor X there in the control booth, overseeing the proceedings. 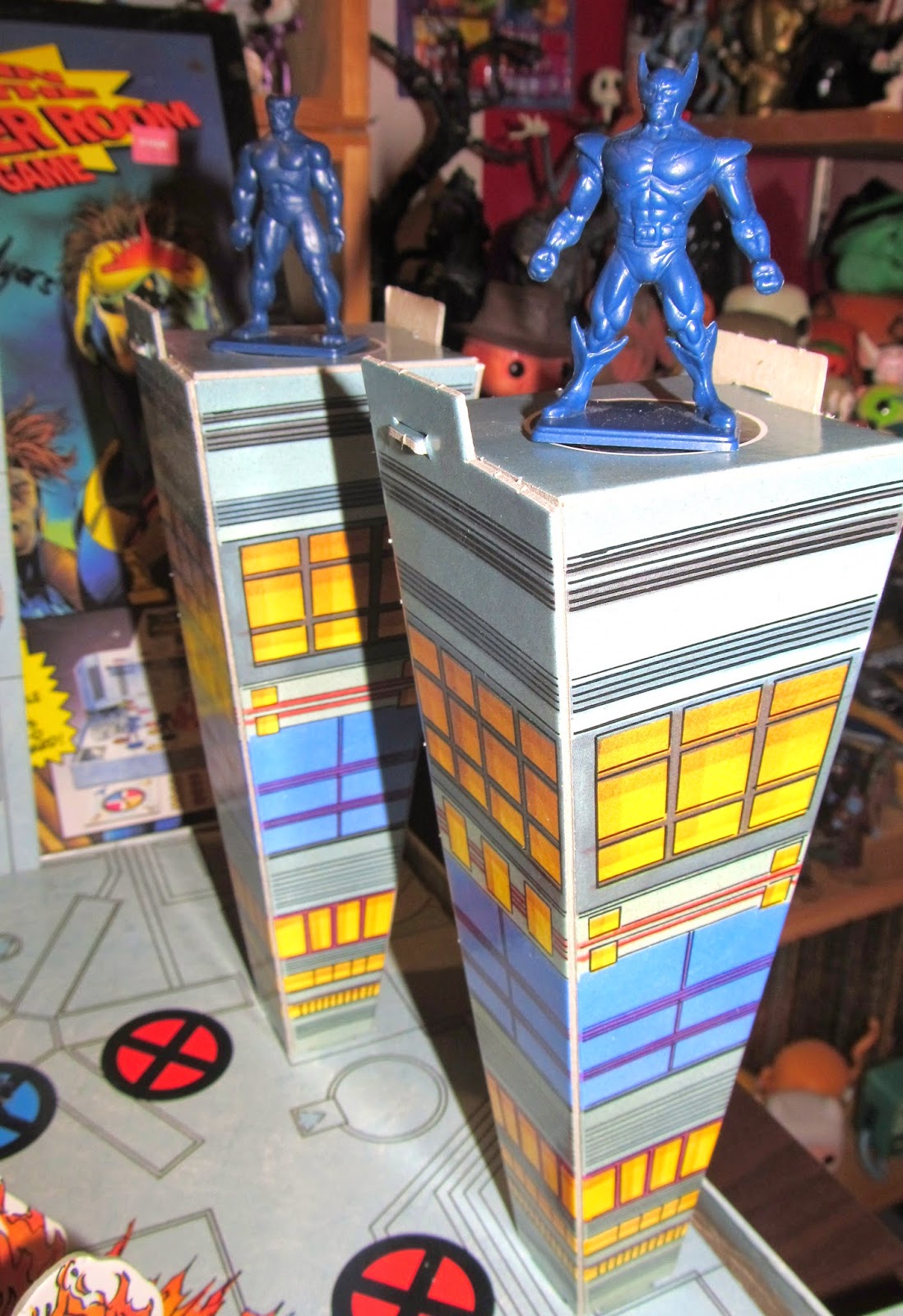 There's a couple of towers that are a part of the build too, and I'm including them here just because I can basically. I was SOOO excited to bring this home you guys! This is LOOKs like such a neat game! Maybe when my kids are a little bit older I'll even get to play it!

Well, that is ALL for tonight kids! I'll be back with more Geeky Goodwill Goodies in the near future! Until then, I suggest you enjoy some Happy Hunting!
Posted by Derek Ash at 7:17 PM