All right... consider this your warning: This post is going to be LOADED with mostly books. Absolutely no toys. So if that's not your thing... turn back now. But I hope you don'! There's some pretty fun and funny book finds this time around! Stick around and check it out! 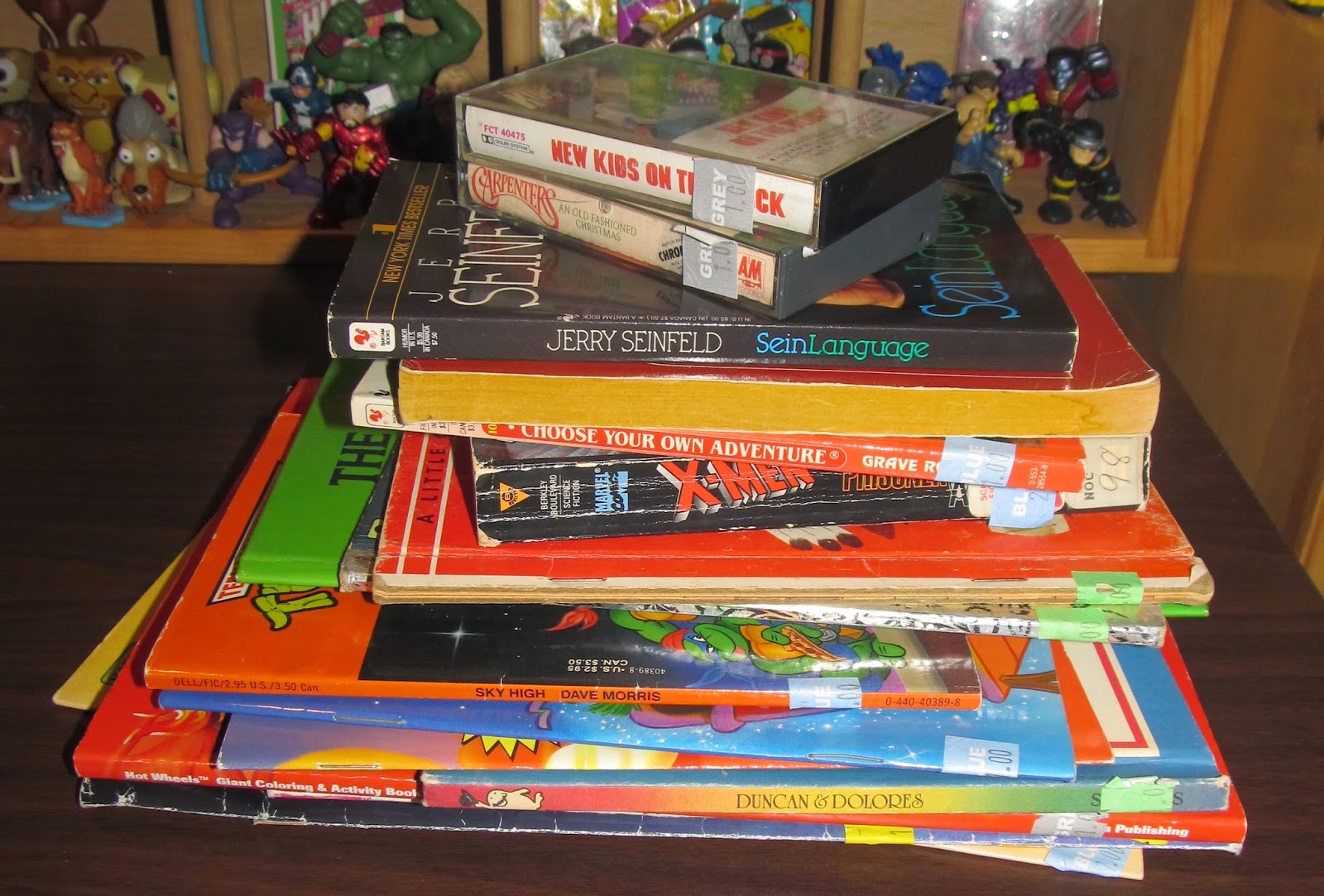 This is everything, all piled together. Last chance to turn back! 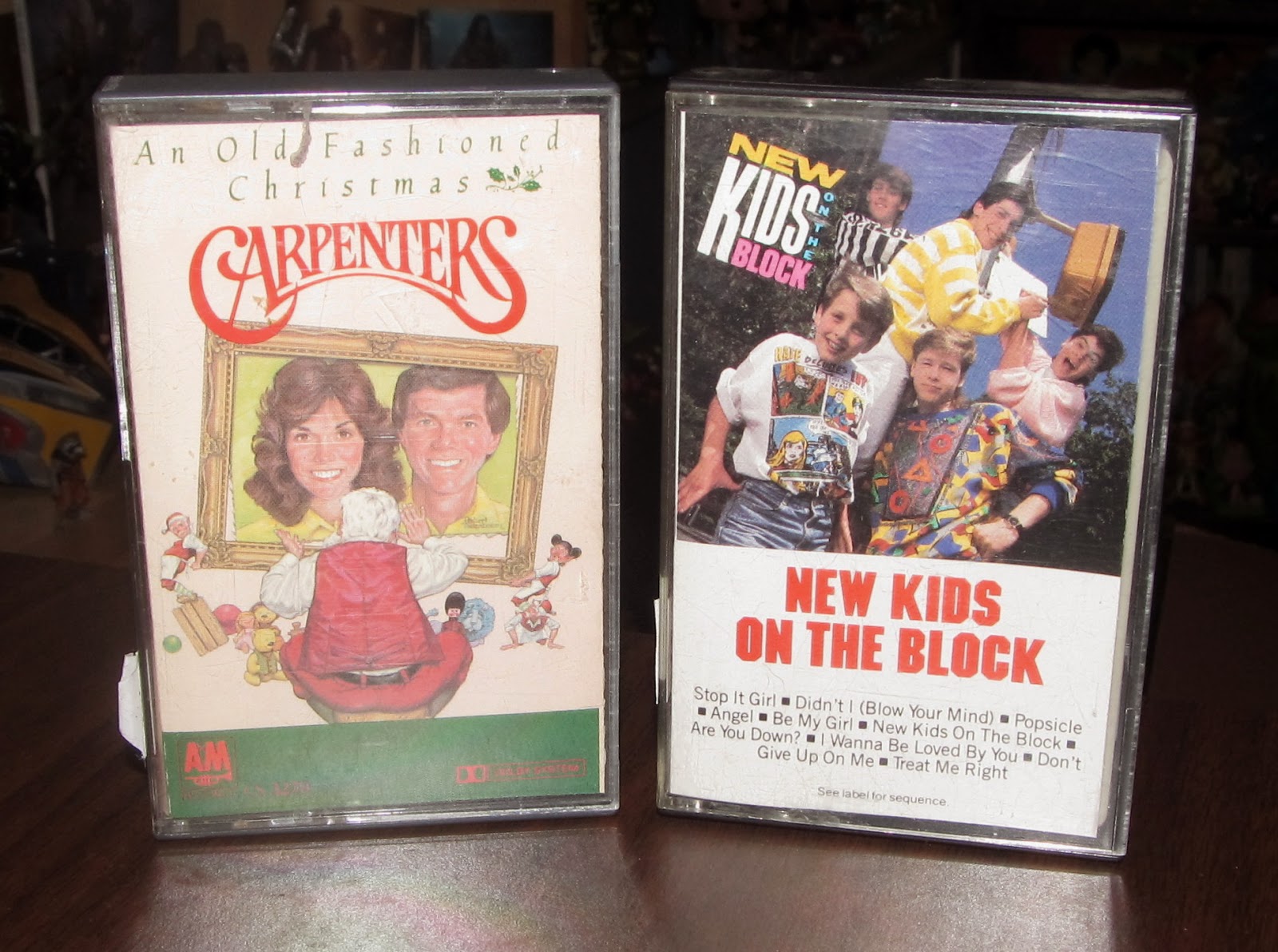 First up a couple of cassette tapes. "The Carpenters: And Old Fashioned Christmas" and the self-titled "New Kids on the Block" cassette! Not a whole lot to say about either of these, honestly... I'll probably have more to say about the Carpenters when December rolls back around. I was never a huge New Kids fan, but I do have a certain amount of nostalgia for them since I had friends (or friends with older sisters) who LOVED these guys. Look at those clothes. And mullets! 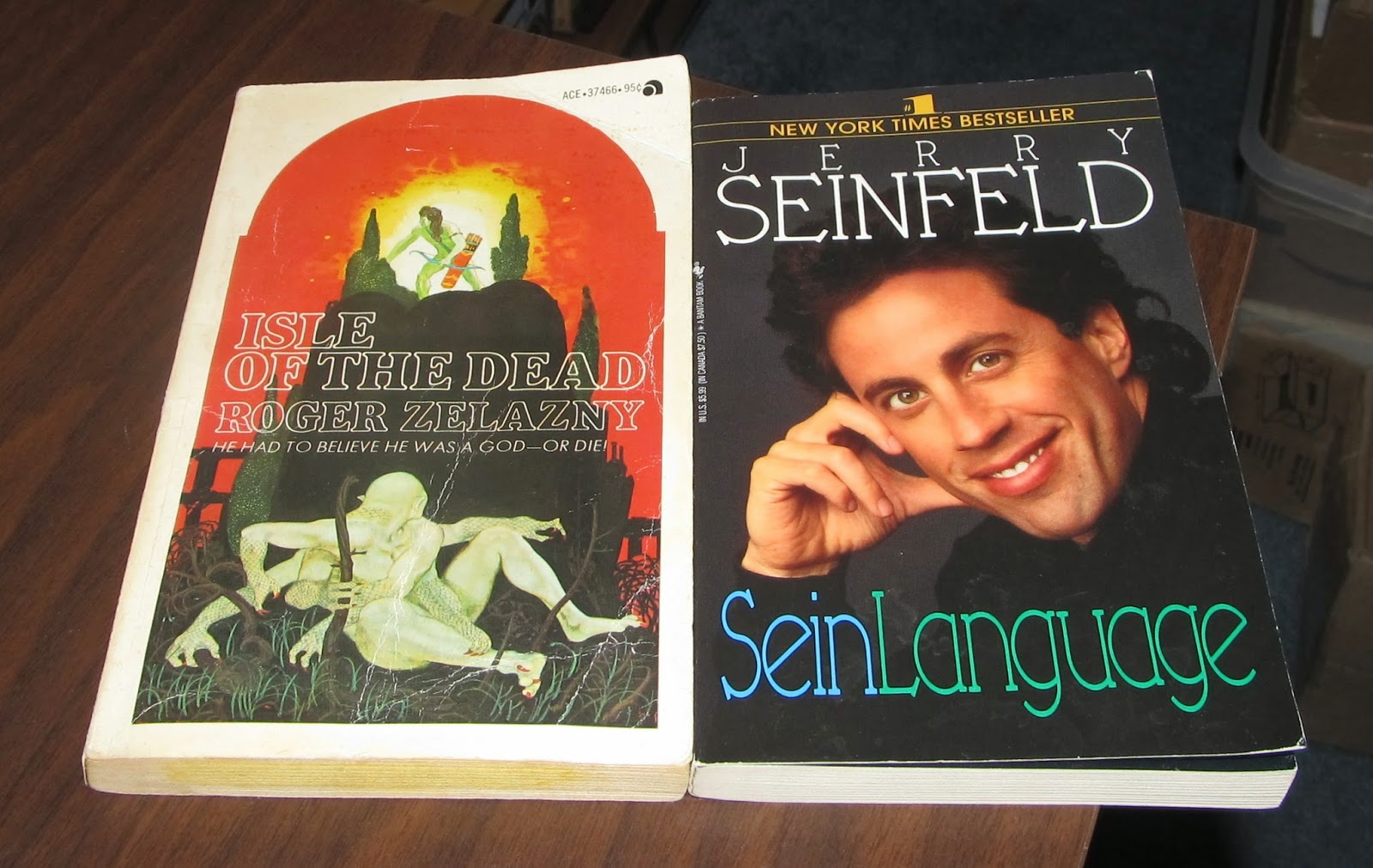 Roger Zelazny is hands down one of my top 5 authors, so the rare occasion where I find a book of his that I don't already own is pretty great. Isle of the Dead looks to be a great read in typical Zelazny fashion. I never read SeinLanguage when it was really popular, so I'll be interested to see what I think of it when I finally crack the spine on this one. Seinfeld was one of my favorite sitcoms (as it was for most folks I guess) at a certain point in my life. 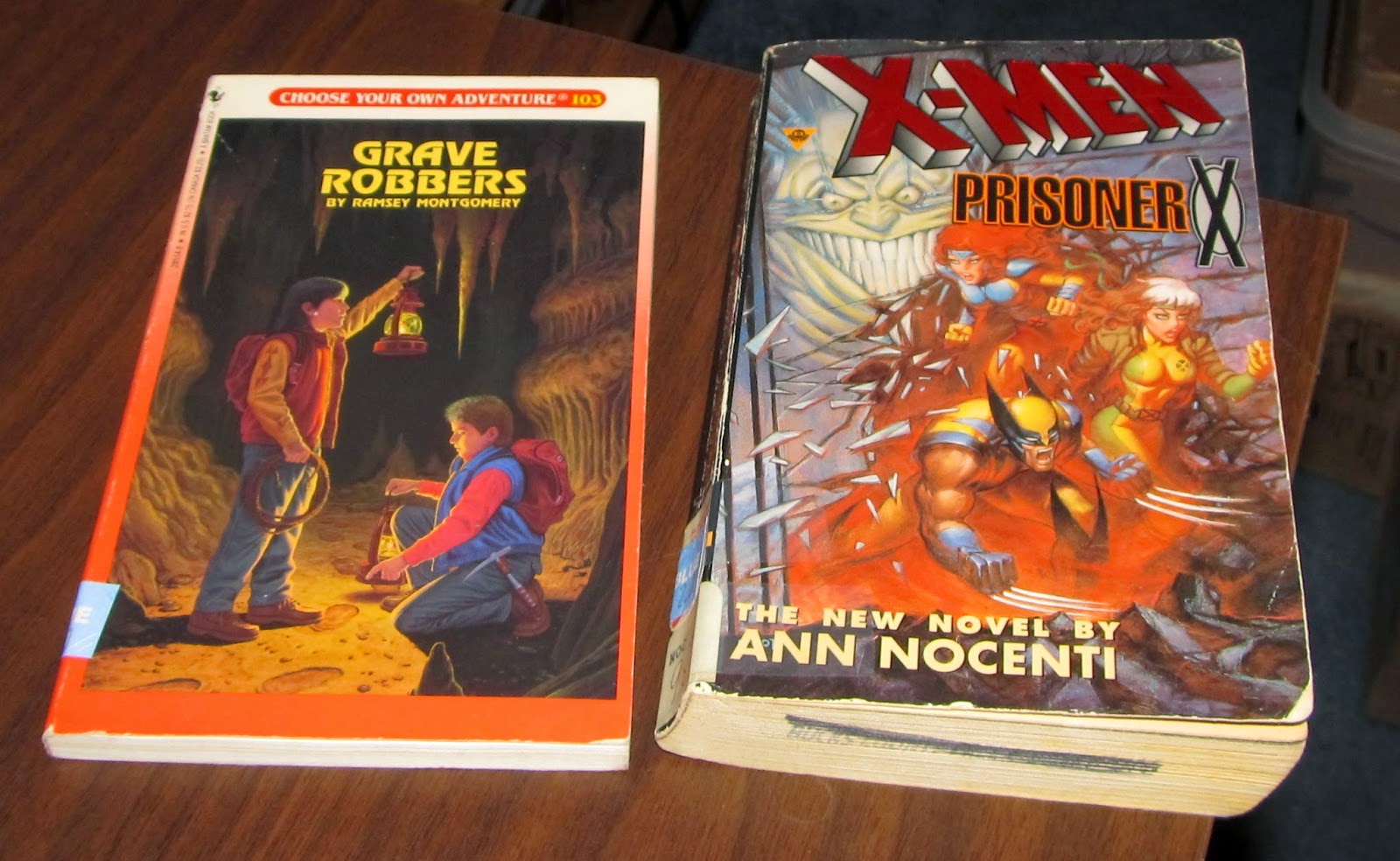 Choose YOur Own Adventures very rarely DON'T make it home with me, so Grave Robbers should come as no surprise... and although I am a self-avowed X-Men fanatic from waaay back, it is rare that I pick up comic book novels. This one, Prisoner X, is written by Anne Nocenti and involves the Mojoverse however... so it's just a no-brainer this time. 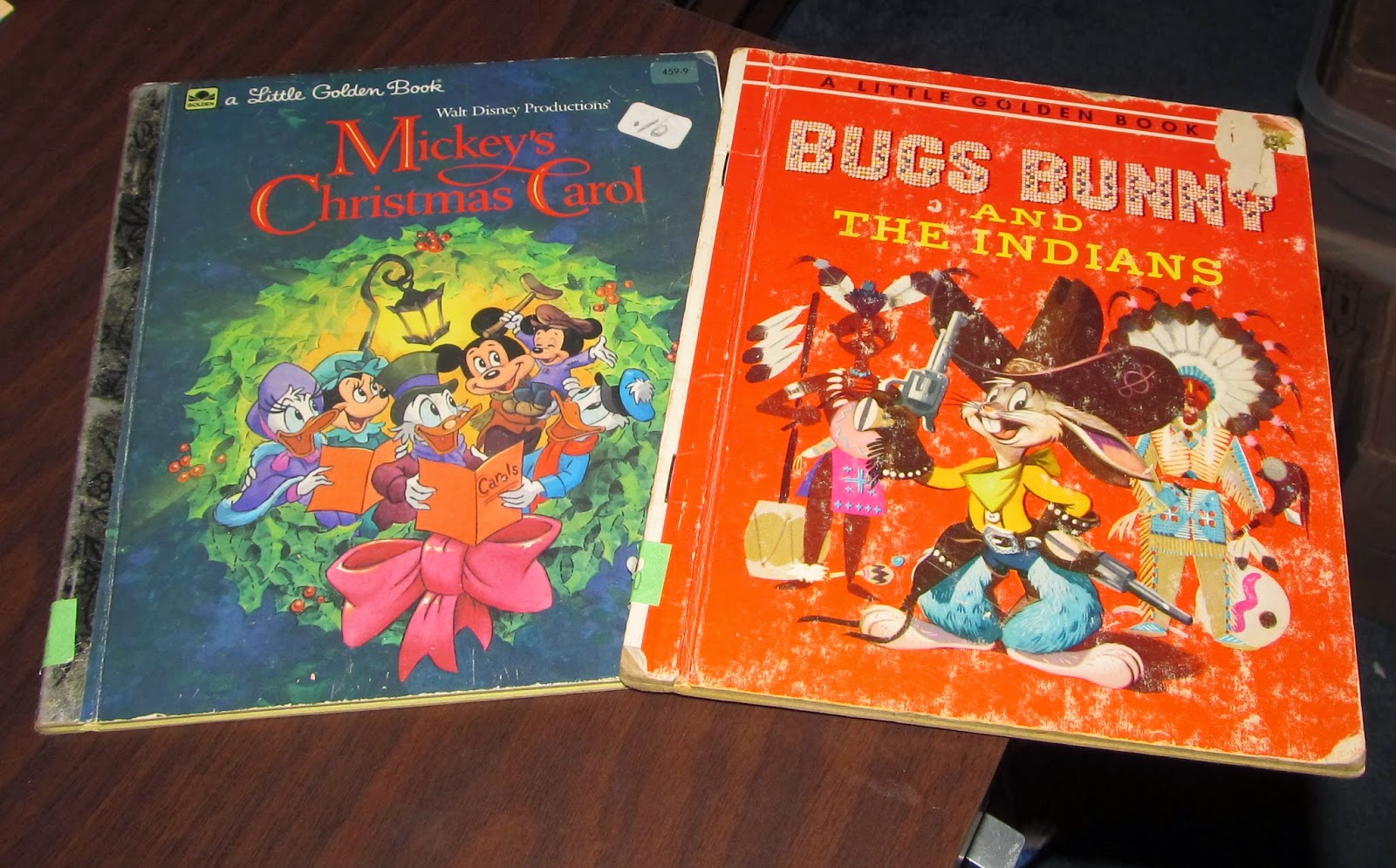 I realized I don't already own the Little Golden Book version of Mickey's Christmas Carol. So... fixed that finally. Phew. I also found this HILARIOUSLY racist copy of Bugs Bunny and the Indians which is also a Little Golden Book which has been stripped of its Golden spine. How racist is it? 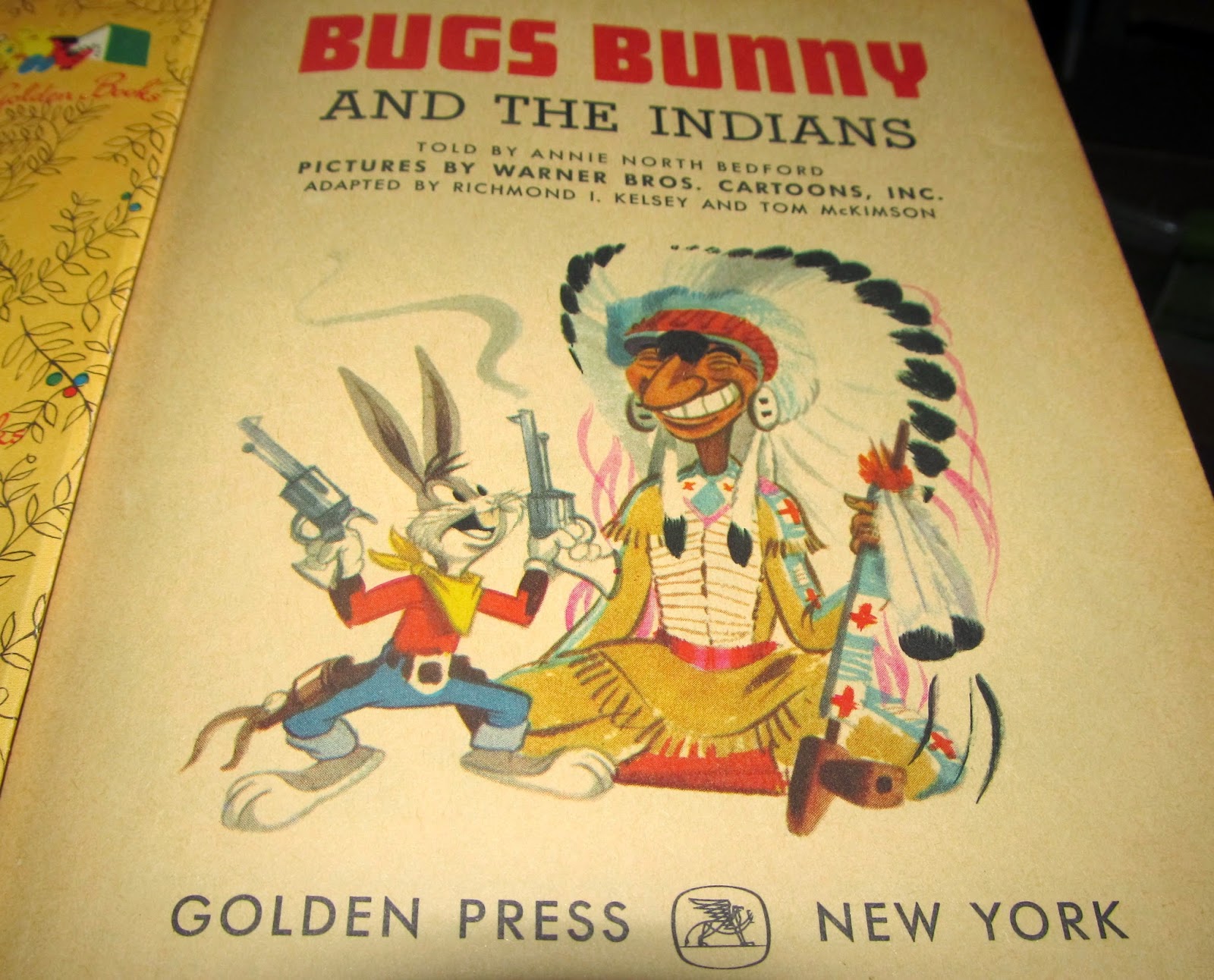 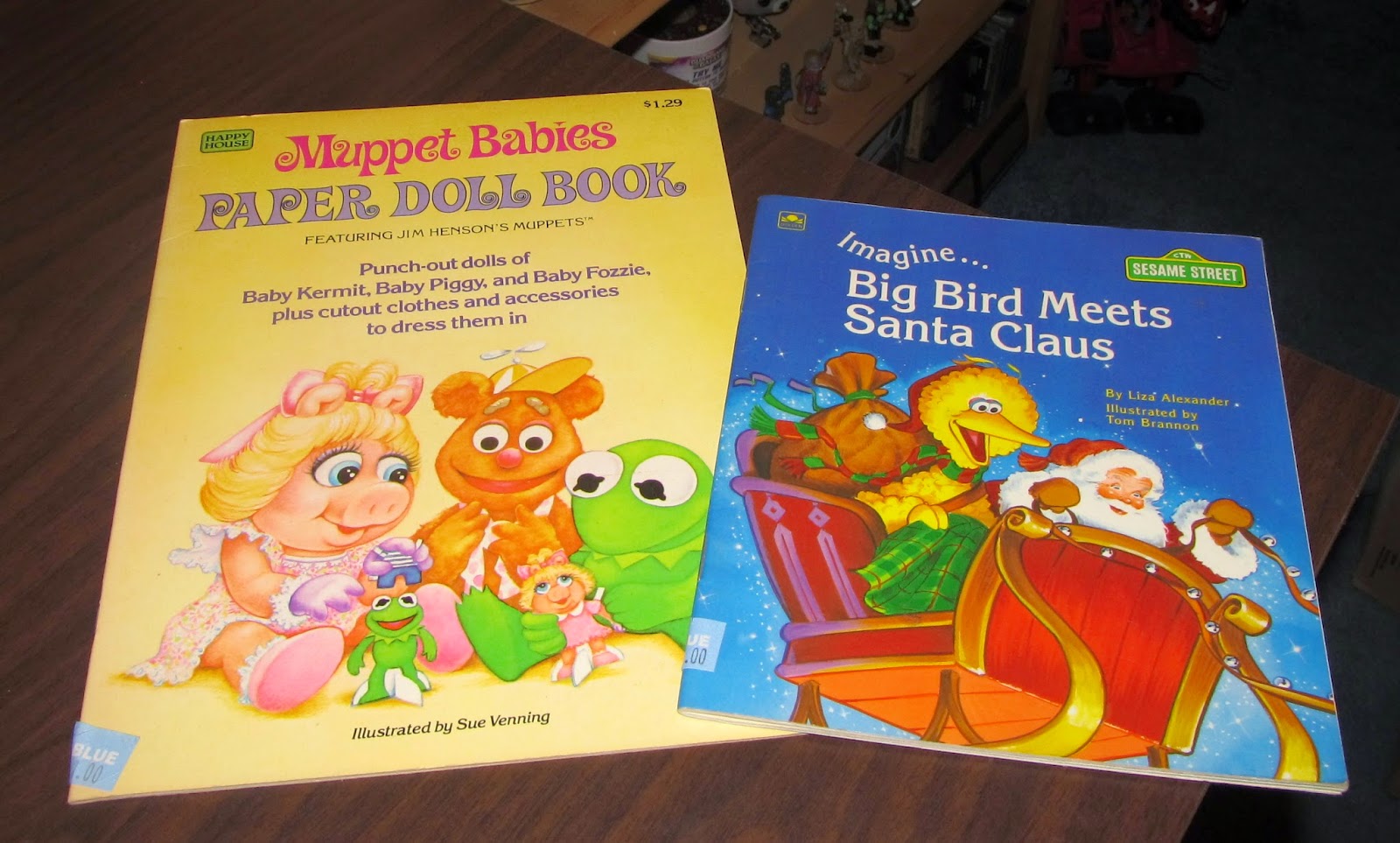 A couple of Muppet-family books to be excited about: a Muppet Babies paper dolls book, and Imagine... Big Bird Meets Santa Claus which I feel is a bit wishy-washy honestly. I get that they're trying to be "honest" here by going with the whole "IMAGINE" concept... but if you want to avoid having to acknowledge the existence of beloved mythical holiday characters (by having them interact with your "real" giant bird puppet character. Ahem.) maybe just try not cashing in on them at all? 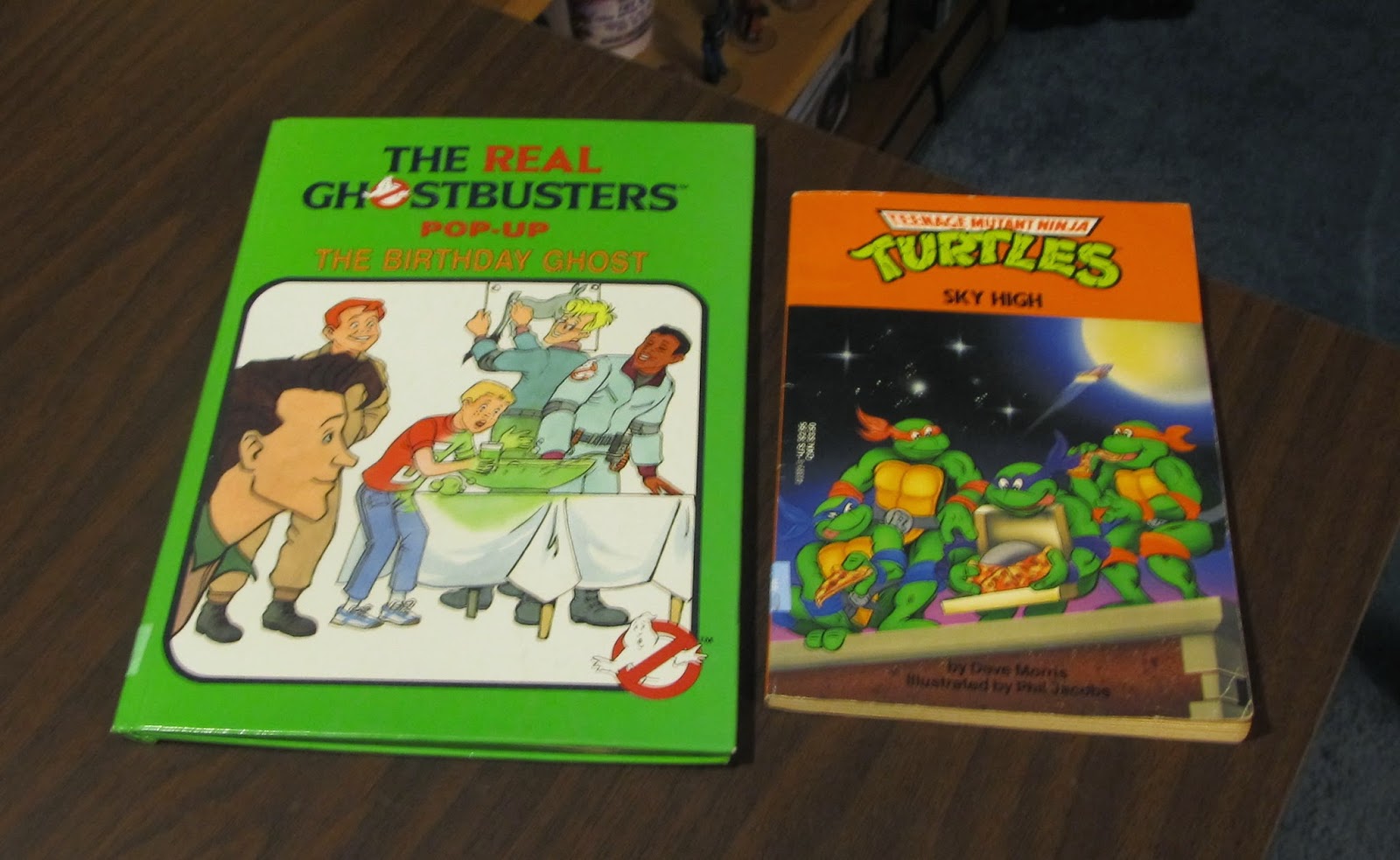 Sorry for how blurry this one came out... probably the very best finds out of this lot and I got a crummy picture of them which I didn't realize until much later. Ah well. There's a Real Ghostbusters Pop-Up book The Birthday Ghost, and a Teenage Mutant Ninja Turtles junior novel, Sky High. I'll go way more in-depth into the pop-up book in the future sometime. It's in good shape, but the pop-ups are really low-effort and kind of lack-luster honestly. But still a fun find! And anything TMNT is always welcome!

Well that's it kids! That's all he wrote! See, that wasn't too bad was it? Some pretty neat books in the pile, right? I thought so. I'll be back soon with more Geeky Goodwill Goodies! Until then, Happy Hunting!
Posted by Derek Ash at 2:44 PM