But for now, let us be content to simply explore THIS bin. Right NOW. 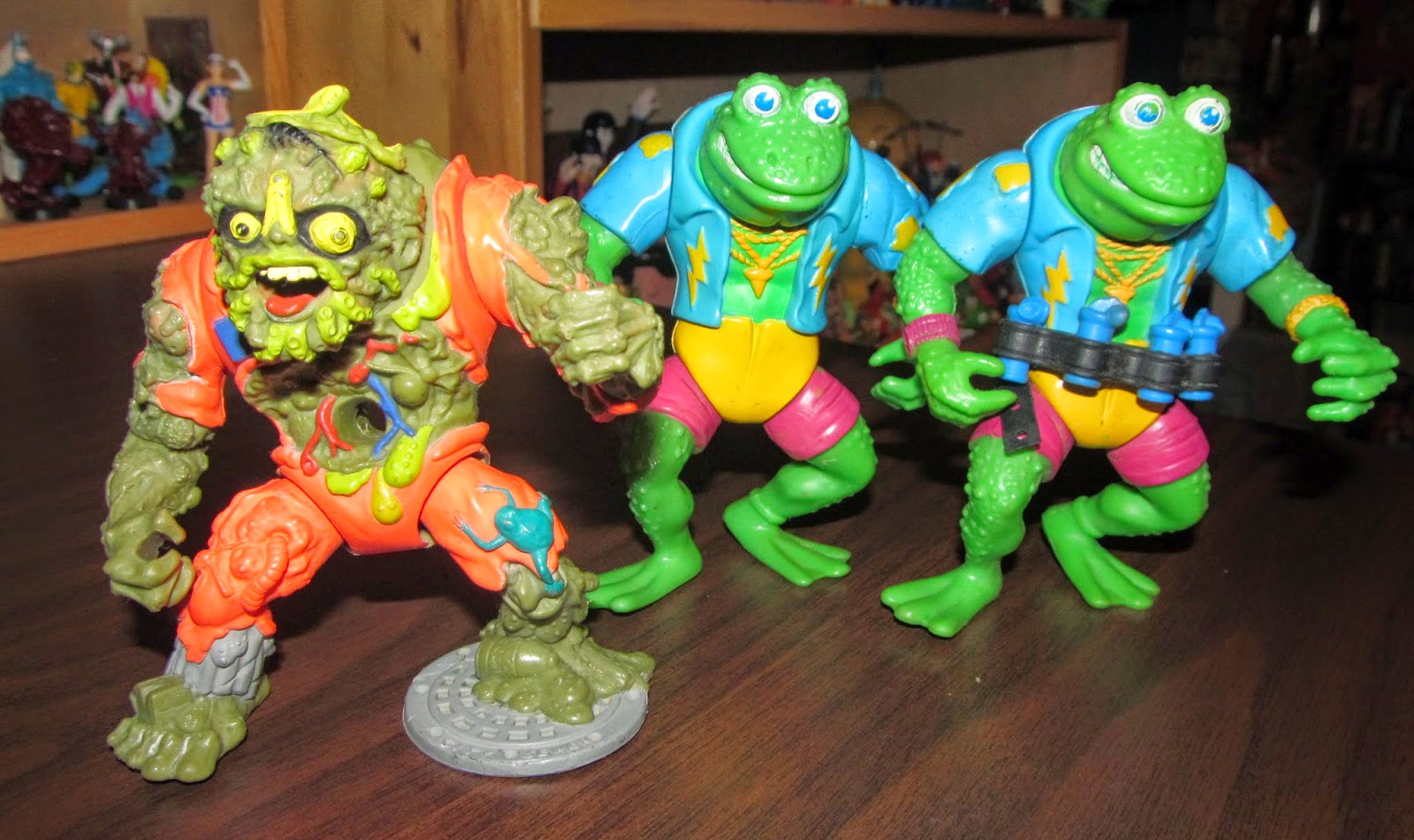 Buckle up buttercup because this layer of the bin is going to be very Teenage Mutant Ninja Turtles-heavy. Now, the LAST bin that I bought from the same guy the year previous also included some TMNT figures, and specifically a Muckman figure... so I assume the guy who sold me this bin is some sort of wheeler-and-dealer when it comes to toys.

This gives me an extra Muckman to pass on to a friend, which is completely Hunky-dorey. The pair of Genghis Frogs is fine too for the same reason. I kept the one with the belt (none of these guys were exactly rich in accessories... or retained all of their body-parts as you will soon see) for my shelf, and set the other one aside for a rainy-day. 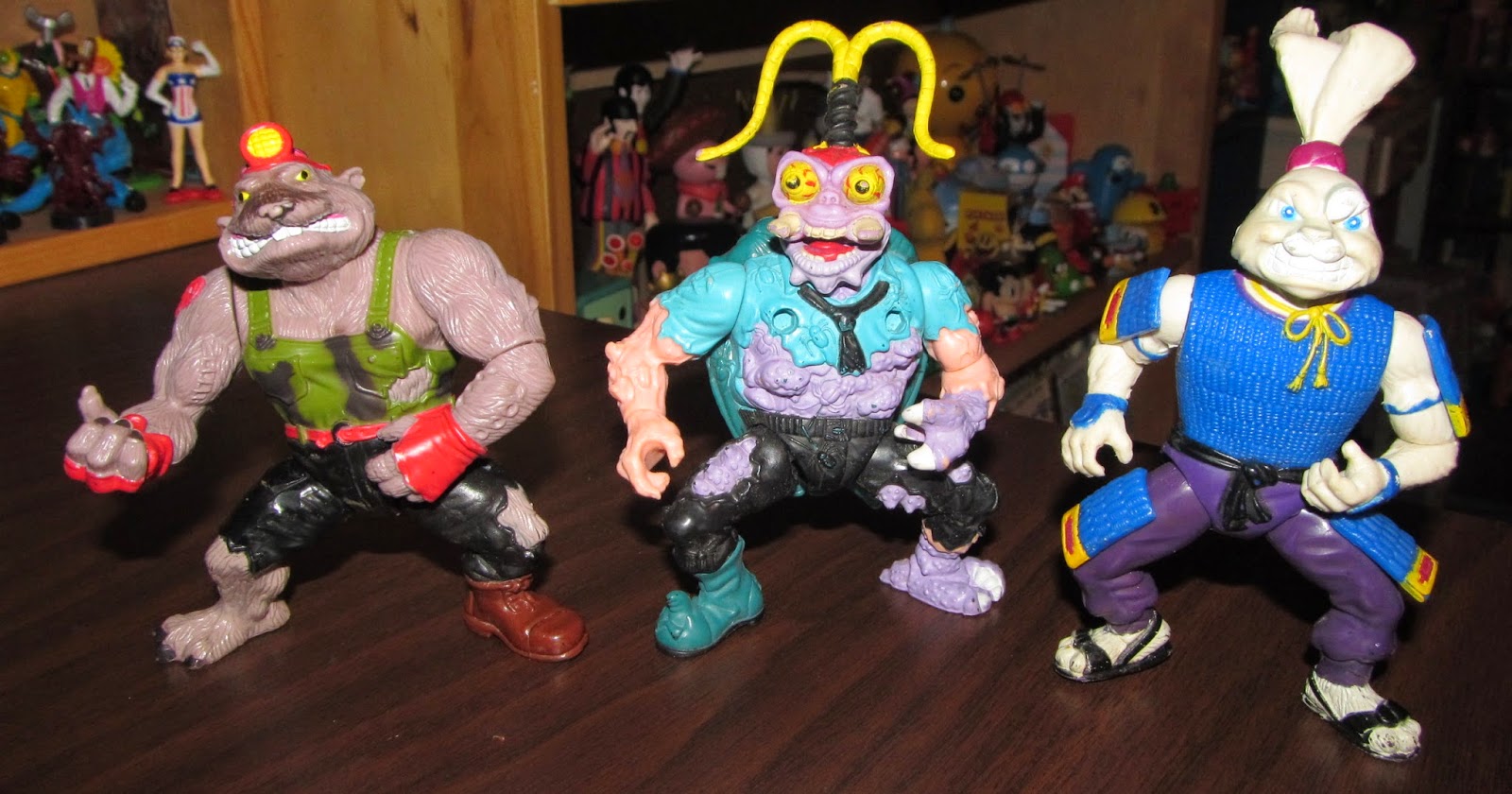 Dirtbag here just happened to be one of my favorite figures as a kid. I have no idea why. He's not really anything to get excited about (and this one is missing his tail, which you can't see) but he was always one of the heavies when I played action figures as a kid. Maybe because he's not quite as silly looking as some of the other figures? Dunno. Next we have Scumbug, a fan favorite that I never had as a kid. You can see though why everyone likes him... he's GNARLY. Mine is unfortunately missing all of his gear, which renders him a bit useless in a fight. And I also ended up with an extra Usagi Yojimbo, which again is fine by me. 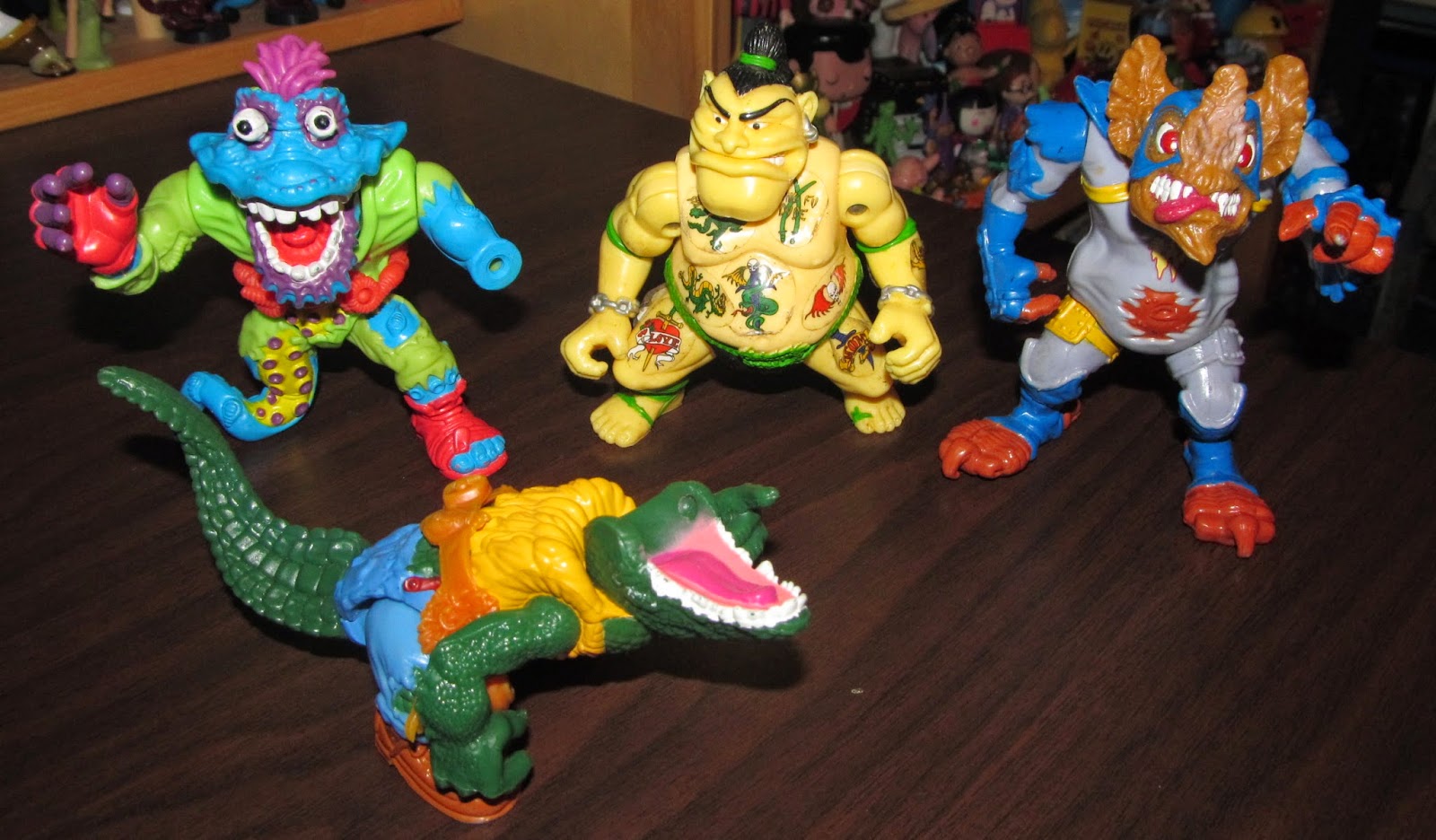 Here we have Wyrm, Tattoo, Wingnut, and Leatherhead. Possibly some of the most tragic figures in the bunch, seeing as almost all of them (not including Tattoo) are missing body parts. Wyrm's left hand, Wingnut's wings (But hopefully not his nuts), and Leatherhead's leathery head are all M.I.A. (Luckily I have a completed Leatherhead in my collection already). Wyrm is another one of those bizarre fan favorites that I never owned as a kid. As far as I know he never made an appearance in the cartoon, but he did show up in the comic book. Tattoo showed up in the cartoon, but bizarrely as a mutated hamster, which is the worst shoe-horning of an action figure into a cartoon that I have ever heard of. Tattoo in the Archie comics was just a sumo wrestler who seeks the turtles' help in rescuing his dog. And Wingnut? He's awesome but I hate the fact that he's missing his wings. 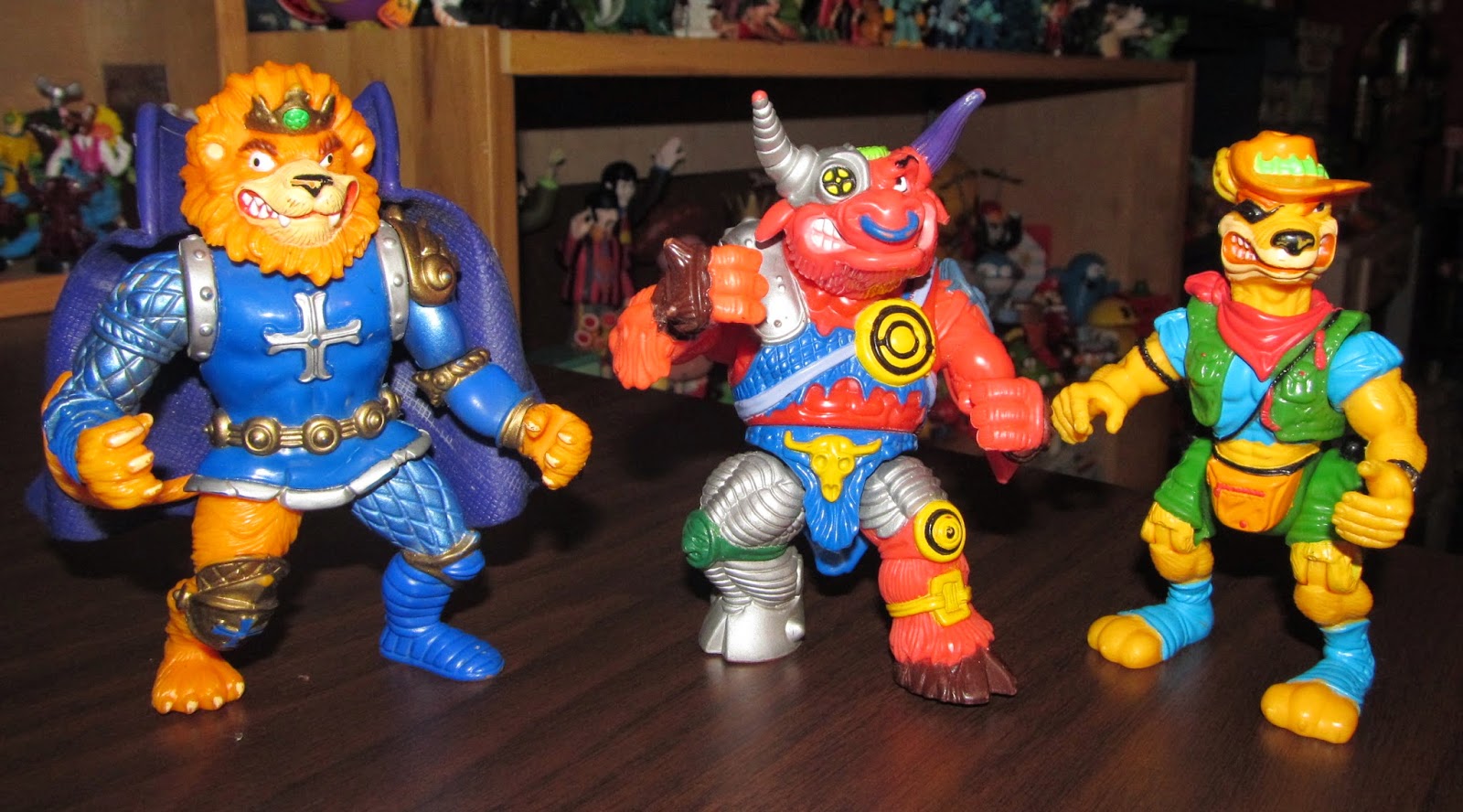 My three favorite TMNT action figure finds in the bunch had to be these three dudes here though. King Lionheart is from the later sets near the end of the line, and Ground Chuck was another of my absolute favorite TMNT action figures as a kid. I got him and Dirtbag around the same time. This kangaroo is Walkabout, and is the first one of his kind I had in my collection. I was later gifted one in better condition, including his sidekick mini-figure... but that is a story for another day. 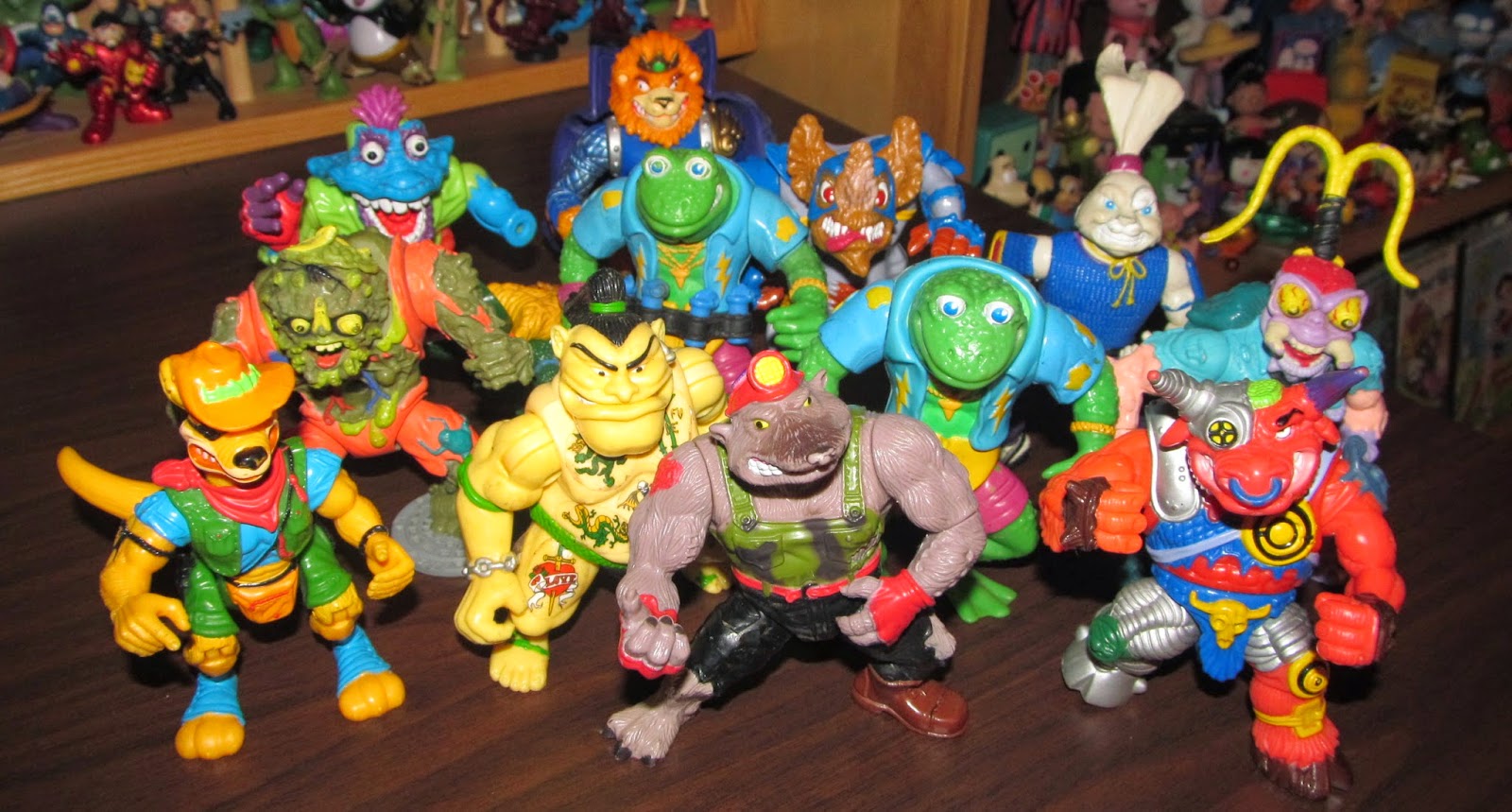 So a total of 13 TMNT action figures were included in the bin, in various states of dismemberment and disarray. This added 9 new figures to my collection, and gave me a pile of figures that I could pass on to others. But that isn't the end of the Turtle-y goodness by any means! 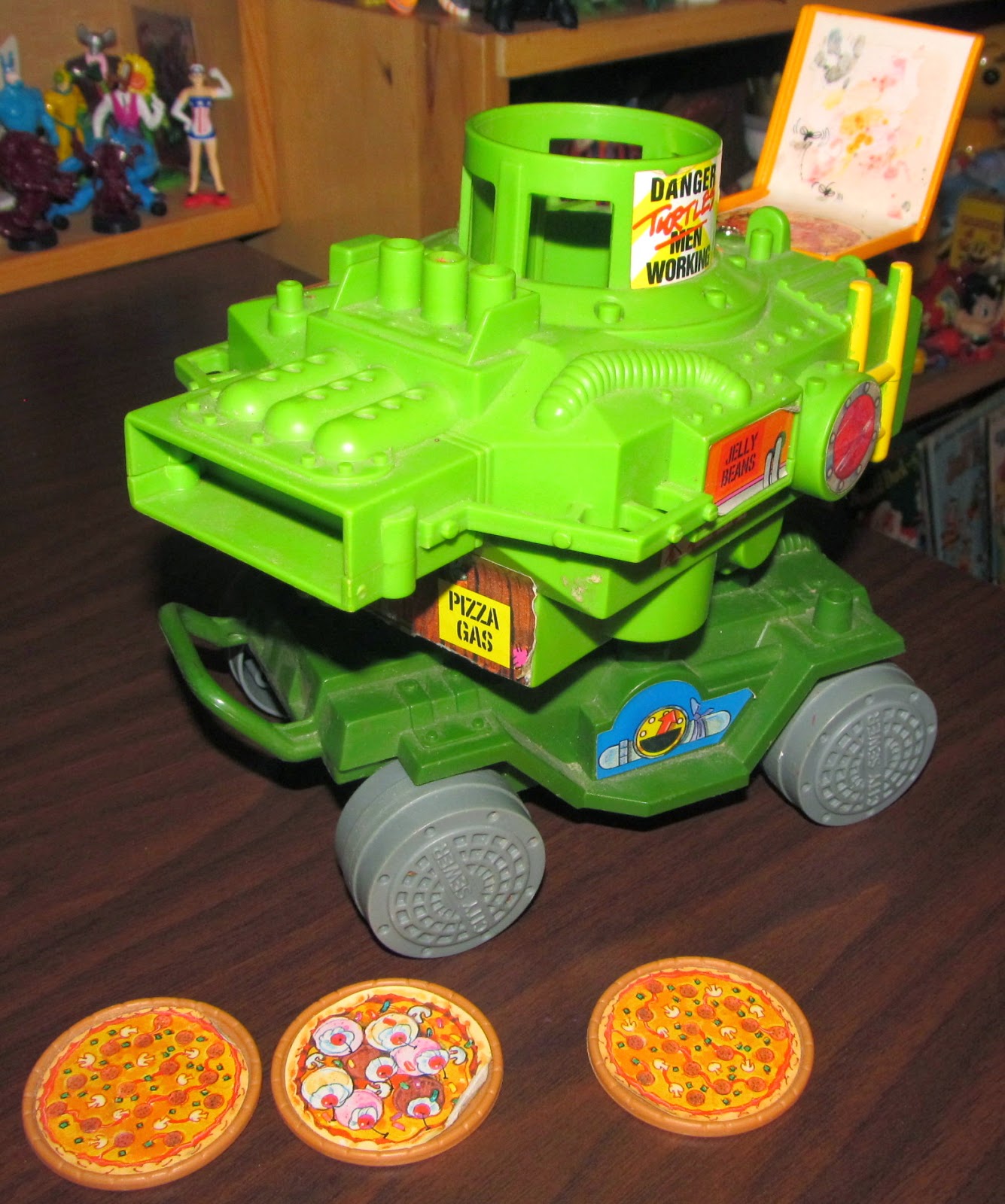 The TMNT Pizza Thrower was included in the bin as well! This was another one that I had never owned as a kid, but I was more than happy to add it to my shelves now! It even had three of its pizzas included in the mix.

Included were some random loose parts as well. The eyeballs there belong to the Foot Cruiser, which I almost started hyperventilating at the prospect of finding in that bin... only to be disappointed when I didn't find it. That thing is AMAZING. The plunger gun I actually (in a bizarre coincidence) already had a random handful of pieces to already. It was this orange gun piece that was included in the awesome bin though. 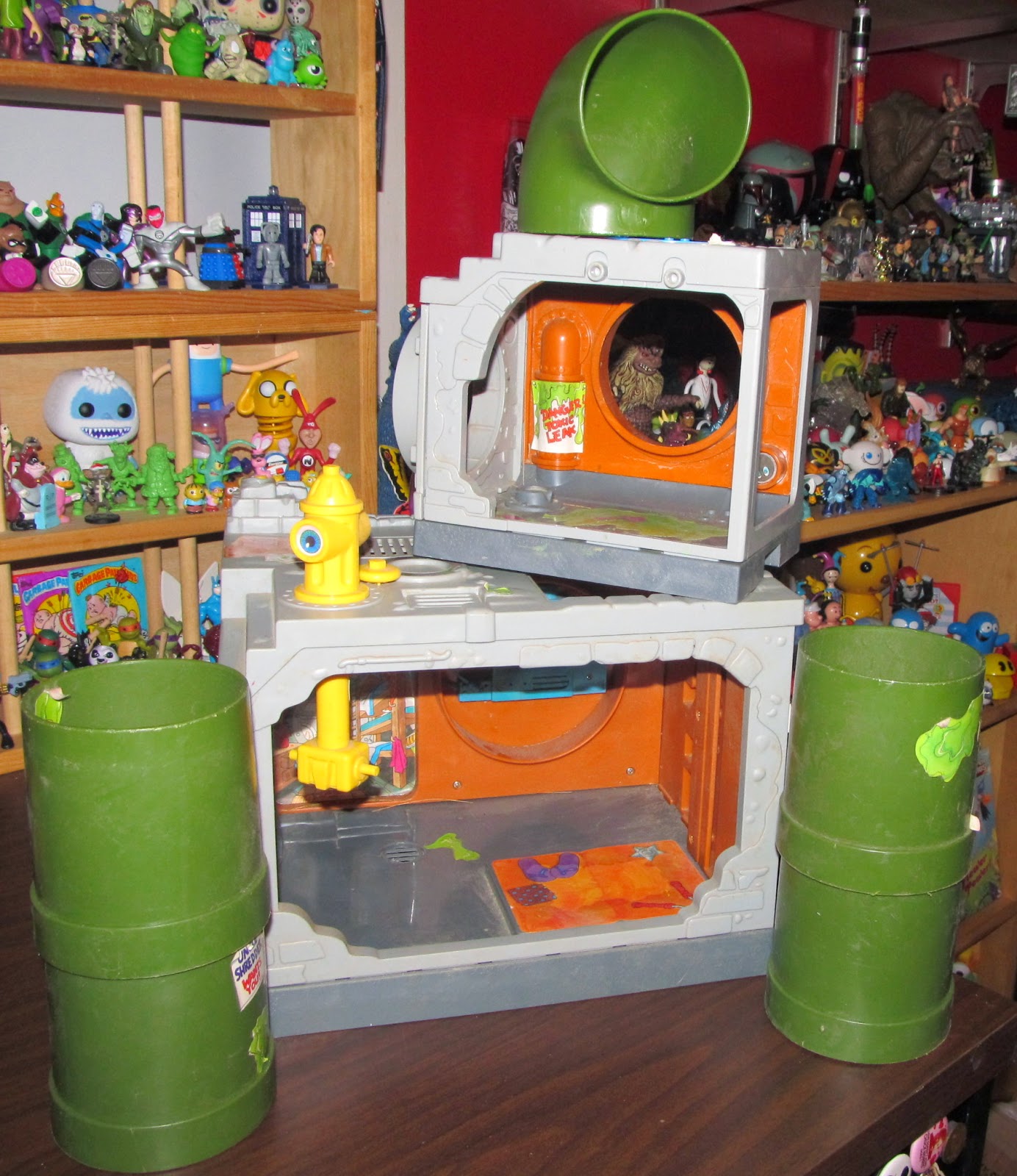 I already own the sewer playset, so this one is extra for me. I never owned this playset as a kid, but now as an adult I have two (this one already has a designated home, I just need to get it there...)!!! 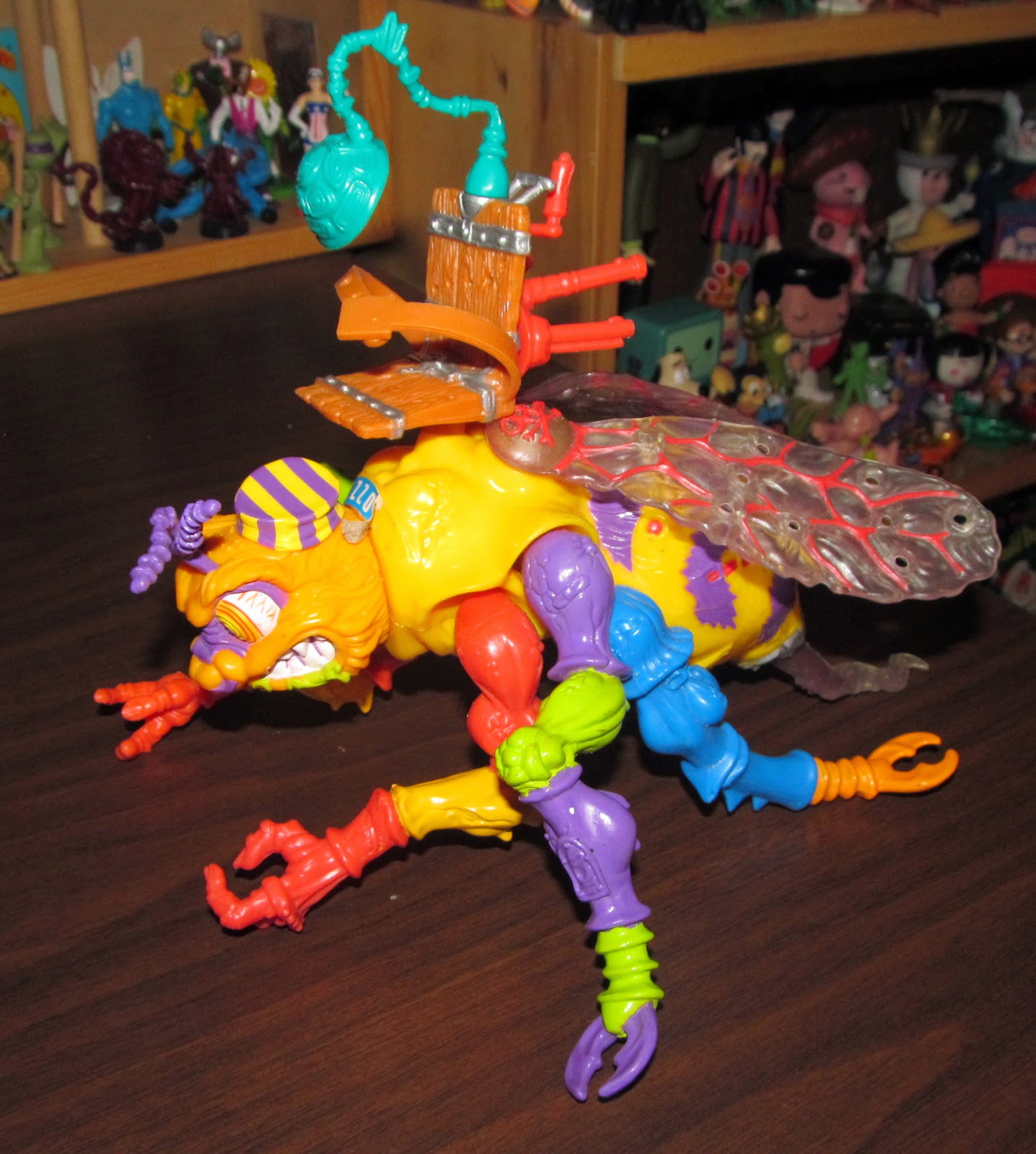 By far though THIS guy was one of the most exciting finds in the ENTIRE BIN. While Killer Bee is yes, technically an action figure, I think of him more as a vehicle. He's missing his grapnel gun and his chainsaw, but other than that he's mostly complete, which was VERY exciting to me. 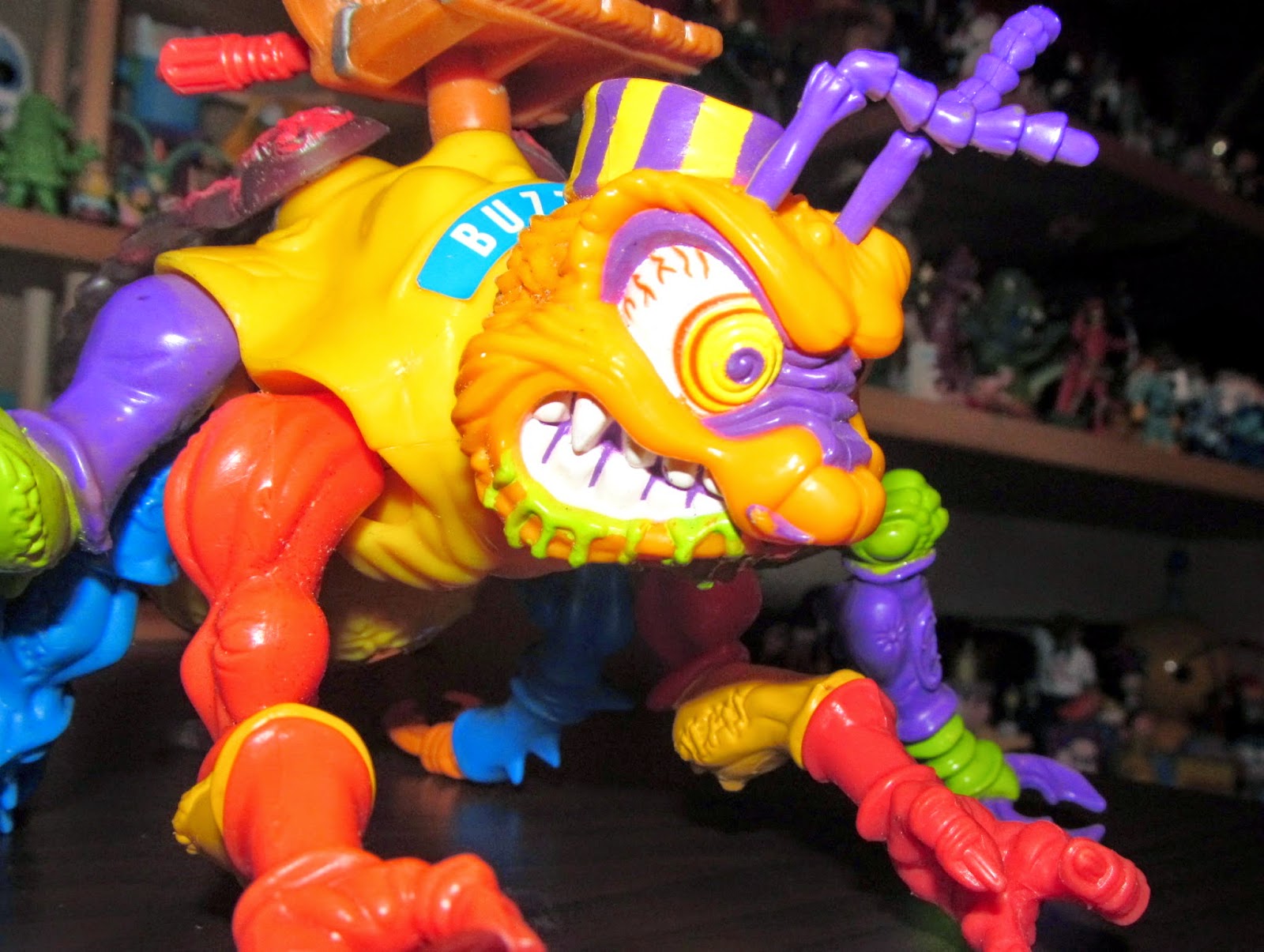 This was one of those toys that I desperately wanted as a kid, but just never got. The colors, the expression on his face... the whole package to this guy is awesome. Seeing him in that bin in the back of that truck was just one of the factors that convinced me to pick up that bin.

So between the robots in the last post, and the TMNT figures in this one, we've now covered the first two thirds of the contents of the bin. There are a handful of items that I'm still trying to decide if I'm going to waste any time on, since they're not very exciting. But there's one more entry to go where I'll be sharing the last of the stuff I was really excited about at the very least. So stay tuned for that!

I'll be back soon with more Geeky Goodwill Goodies soon enough... so until then, Happy Hunting!
Posted by Derek Ash at 11:27 AM