Hey there everybody! For a change, I'm going to actually talk about something I didn't buy while out thrifting, but instead something I picked up on eBay. Normally I stay away from eBay talk on here, but I just love this topic sooo much I couldn't resist. 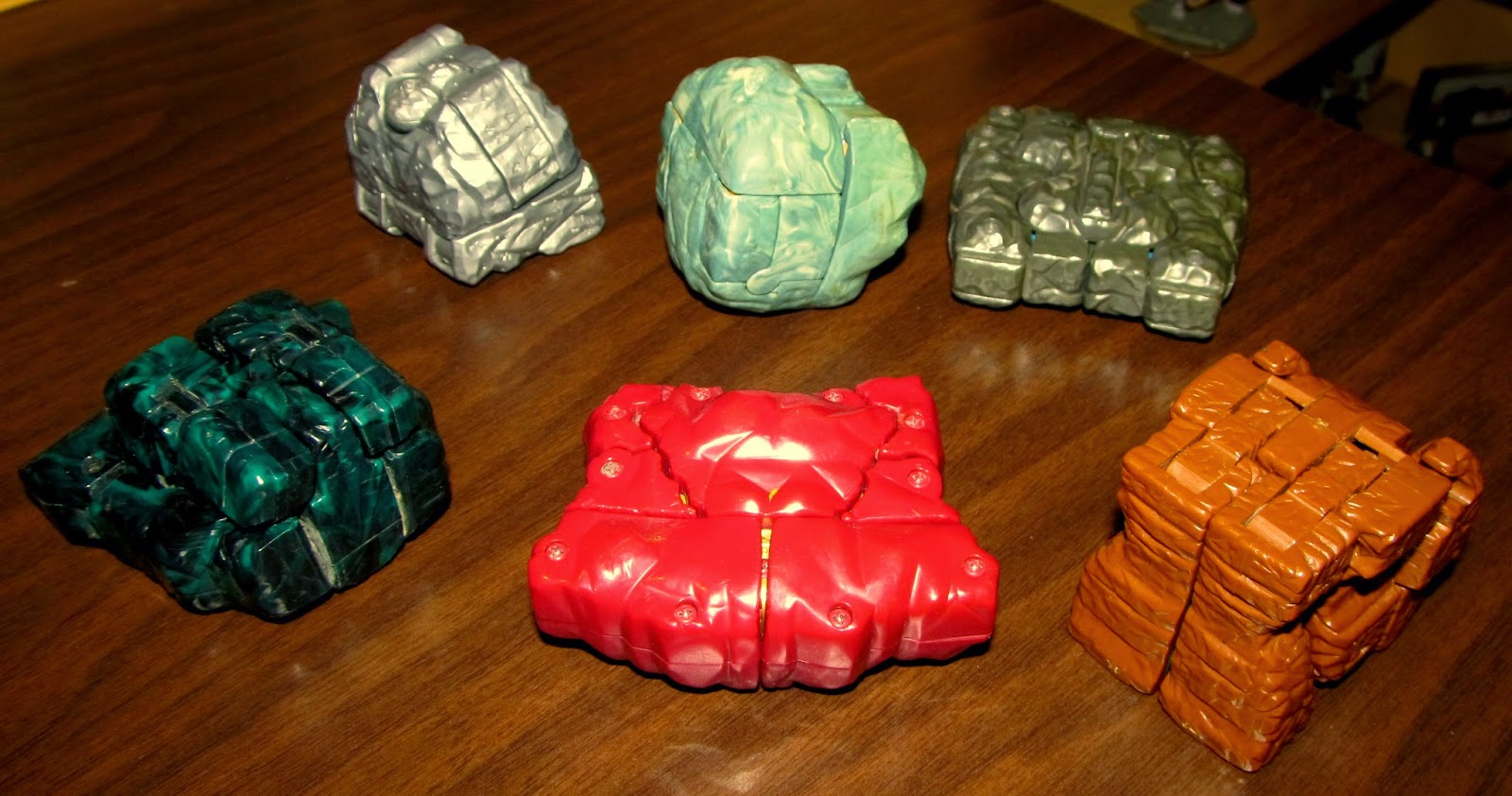 When I was a kid I collected a ridiculous number of toylines, from Star Wars, to Masters of the Universe, to Thundercats to Real Ghostbusters, to G.I. Joe, to TMNT. I was never huge fan of Transformers toys although I did love the cartoon. I ended up with a few GoBots in my toy box because they were the cheaper alternative and (in my memory at least) easier to figure out.

An offshoot of the GoBots were the Rock Lords, which were not transforming robots (with a couple of exceptions) but instead transforming creatures made of living rock. And yes, when they transformed, they turned into the rocks pictured above. They did indeed transform into (ridiculously unconvincing) rocks. This makes them one of the saddest punchlines of all 80's toy jokes because in all actuality, the Rock Lords were incredibly cool action figures that would have made more sense if they simply didn't transform at all... but in fact the transforming action just adds to their charm. 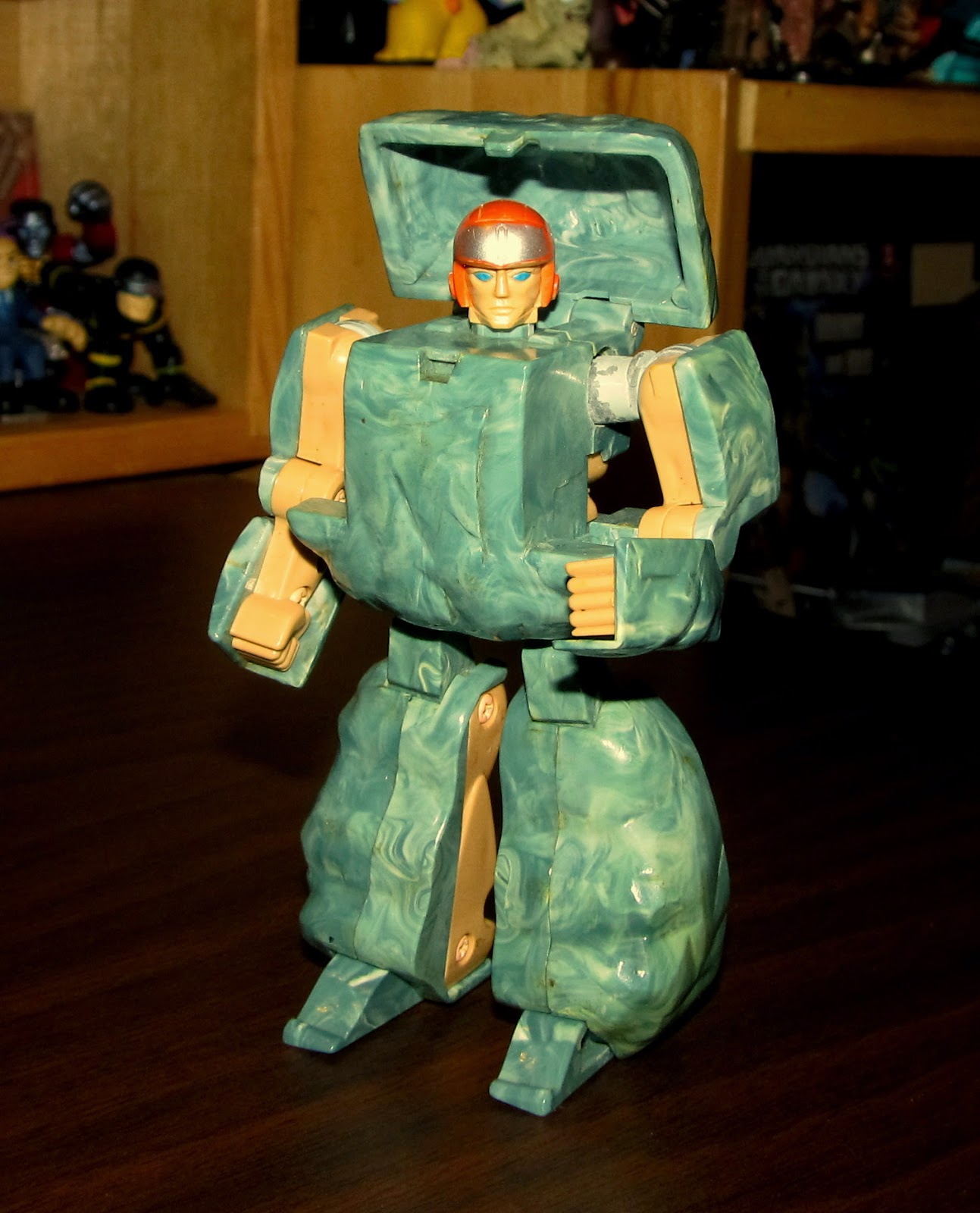 The factions of Rock Lords don't have fancy "Autobot and Decepticon" style names, so they're just good or bad. The leader of the "good guy" Rock Lords is Boulder. Boulder here is one of my all-time favorite toys period. He is one of those toys that I managed to hang onto through various cleaning purges, and as a result he managed to team up with everyone from all of my various other toy-lines over the years. He is also one of the few Rock Lords that actually resembles a rock when in rock form. One of the things I love about this line however weird it may seem is how the transformation mechanics really forced the designers to find a balance between the seeming natural elements of the rocky outer shells and the living elements inside, while still being a functional action figure. In some cases, like Boulder, this was a perfect, successful balance. In others however... 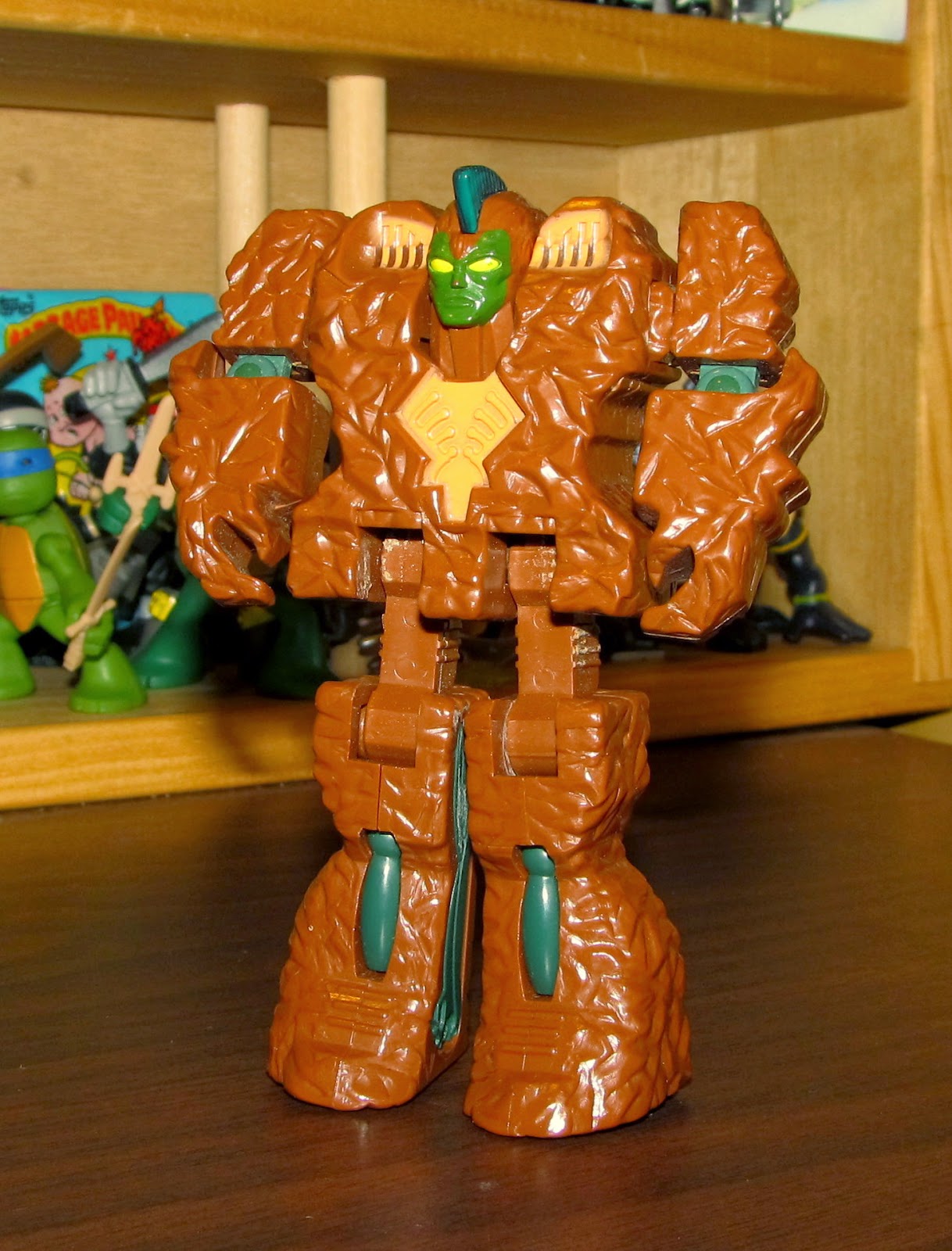 ... like Magmar here, the conversion is less successful. Magmar is the leader of the evil faction of Rock Lords. He is supposed to be a bad-ass, but unfortunately his articulation is ridiculously limited due to his design. His arms move up and down but his pointless elbows don't really do much to enhance his arms posing, and his legs actually bend backwards, like a crane's. What I do genuinely love about Magmar's design are the color highlights and the mohawk. The yellow on his chest and shoulders here actually reads a much darker orange color in person (think my flash bleached it out a bit) and the green accents are pretty badass. I didn't own Magmar as a kid, and so my evil Rock Lords were led by Stoneheart (who I do not currently own, and who is therefore not in this blog post). 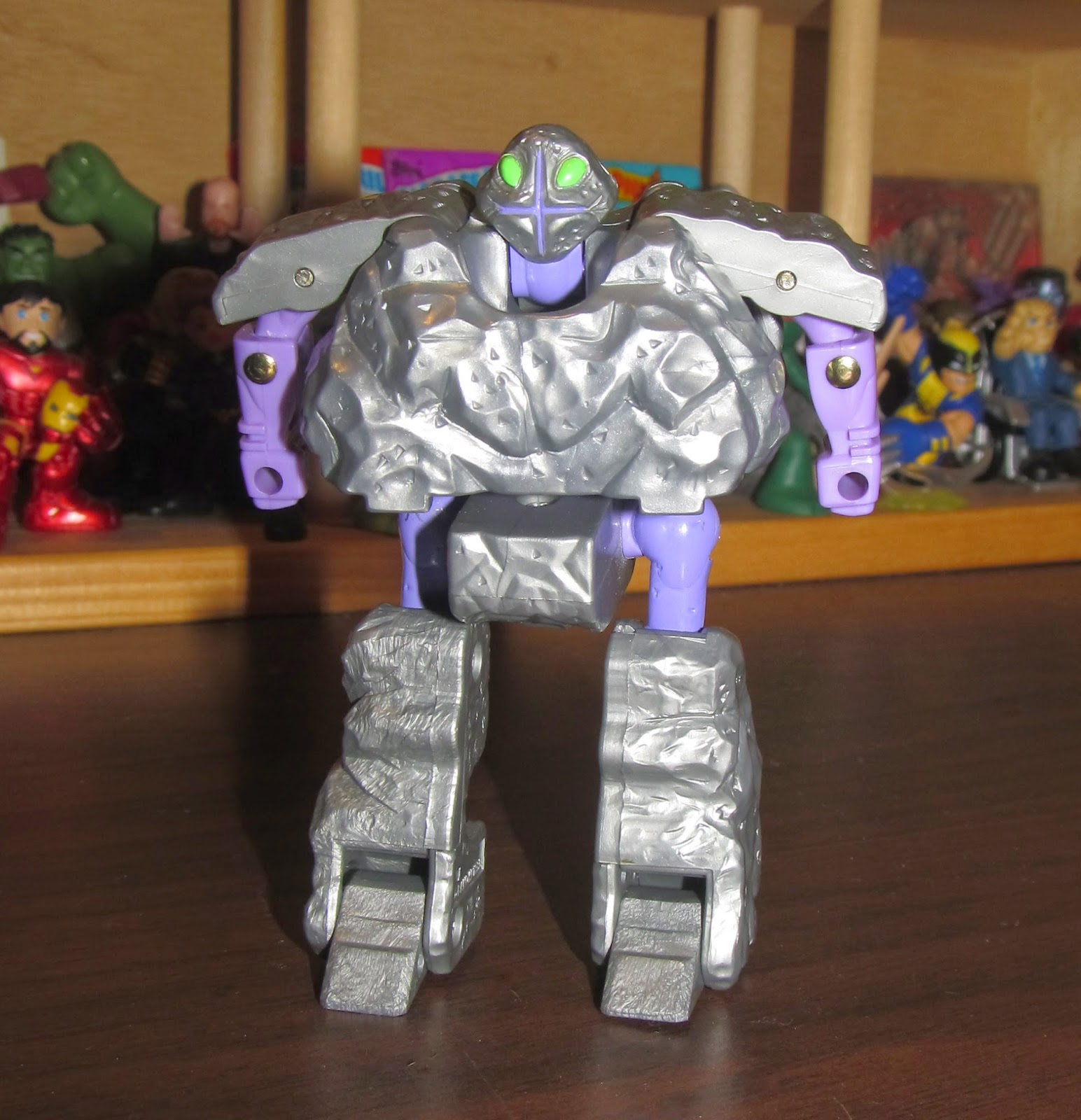 This weird looking fellow is Crack-Pot. As a kid I thought he was kind of creepy, and I think I ended up treating him as a villain. He is, in fact, actually a heroic Rock Lord. He was the only other Rock Lord from my collection to survive the great toy purges alongside Boulder. 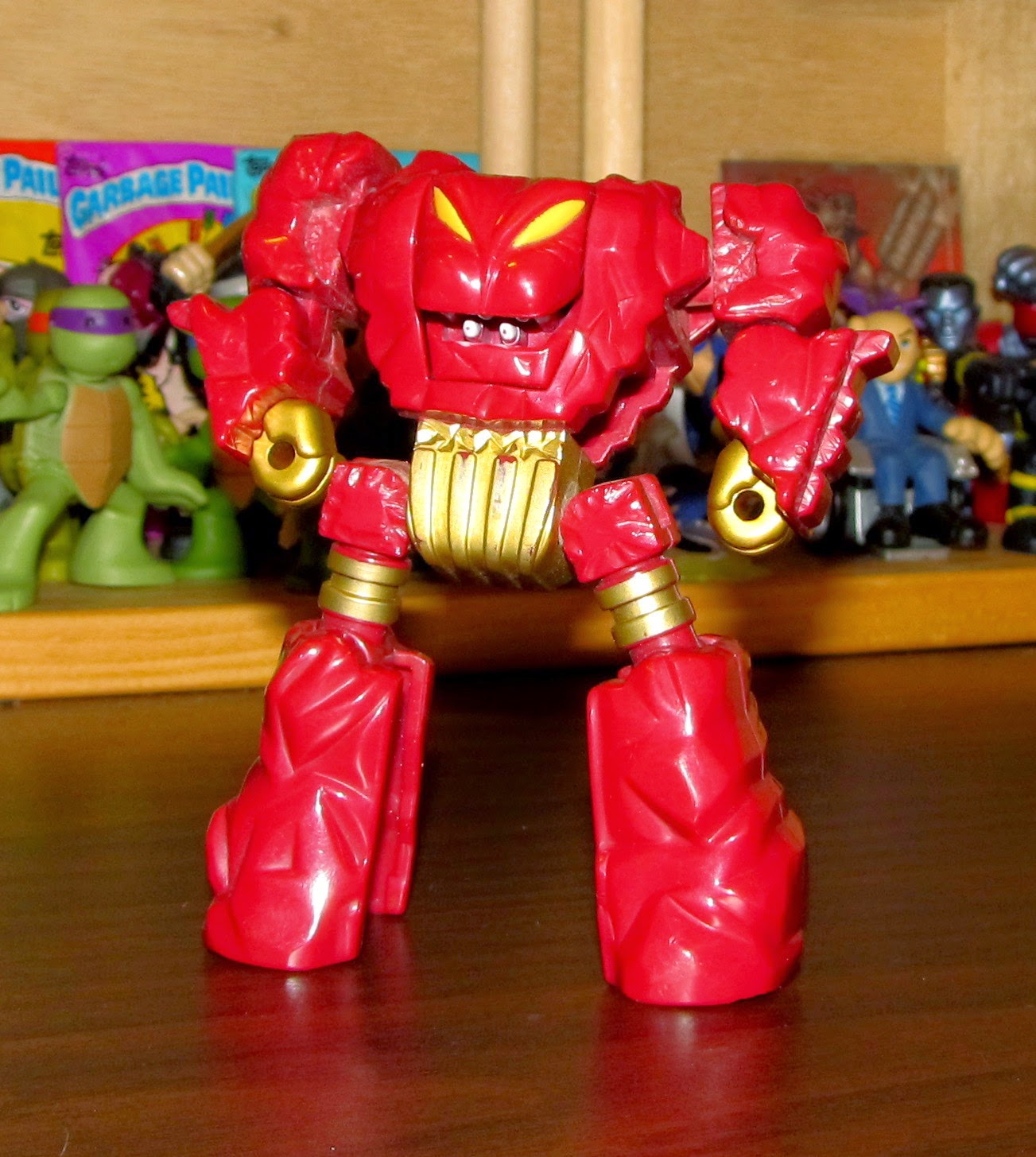 This fantastic fellow is Brimstone. He was one of my absolute favorite villains from the line as a kid. He has the peculiar distinction of still having his eyes visible when he transforms into a rock (you can't see them in the picture at the top of the post because I have him flipped over on his face) and due to his hunched appearance and color he reminds me of a crab. This was always the "crazy guy" of the bunch, all hissing and screeching while he fights. 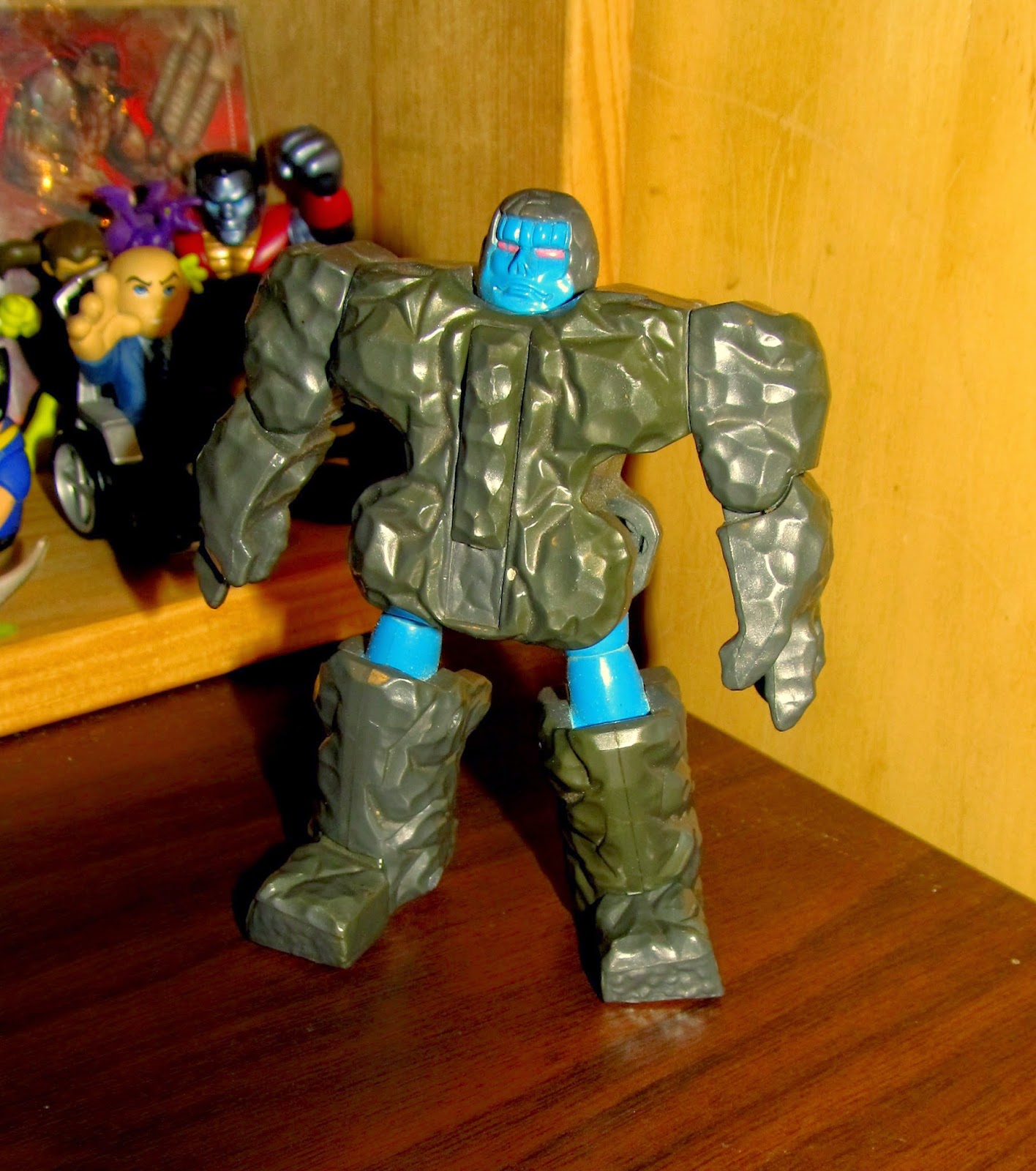 This rugged guy is Granite, and was given to me by Brian of Pop Pop! It's Trash Culture fame. Granite was always Boulder's second in command in my mind, and a loyal friend. Nuggit (the little gold robot I also haven't tracked down yet) always played the part of the sidekick, so I wouldn't call Granite that. He's more Boulder's Samwise than his Woozy Winks. He does however remind me these days of the Sontarans from Doctor Who. 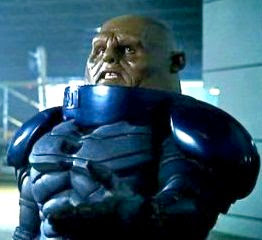 Actually most of the Rock Lords look like a combination of Doctor Who creatures cross pollinated with Gwar band members, so that's not surprising. 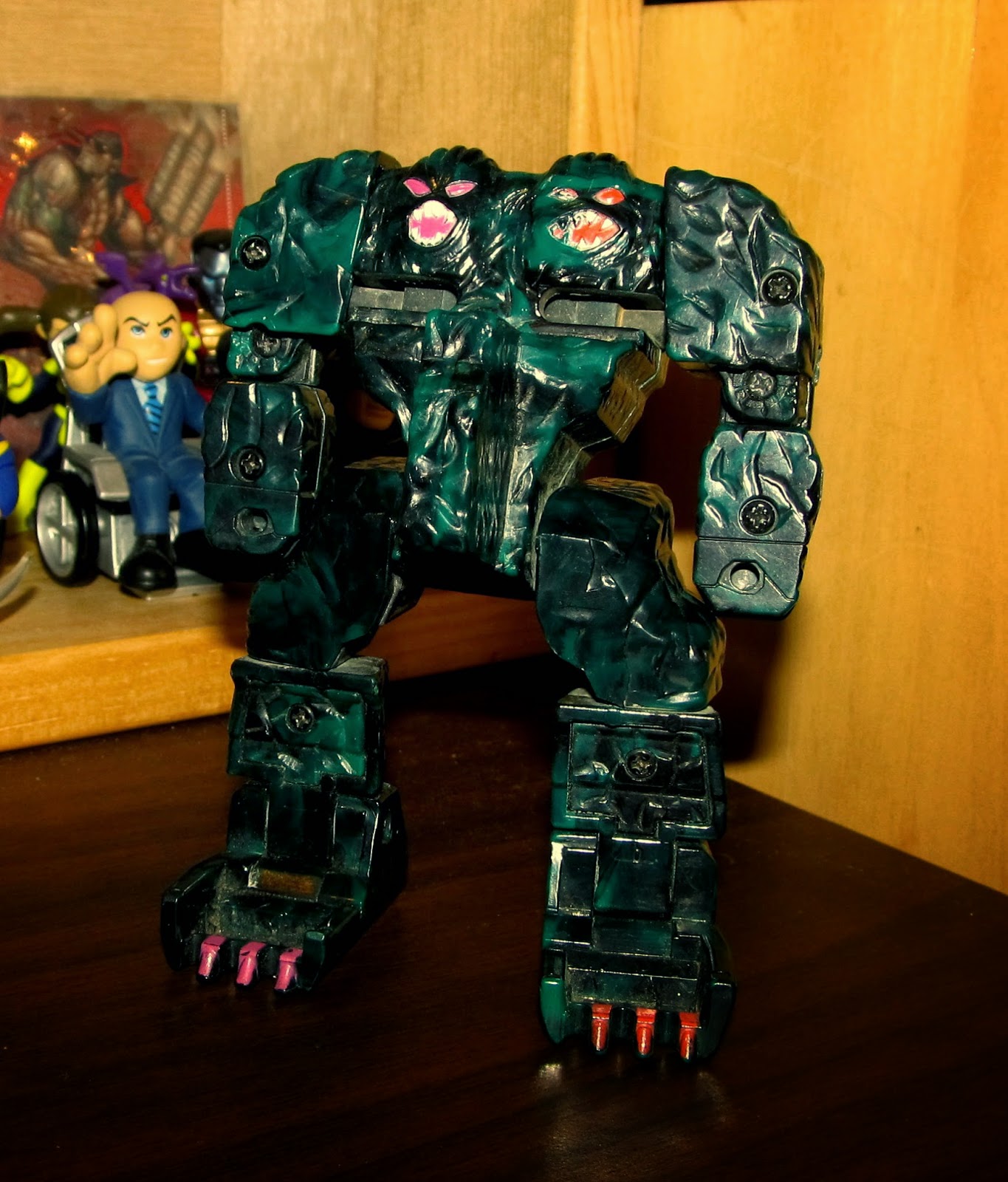 This last figure I currently own is Styx 'n Stones. Following the "my army of evil henchmen must include a two-headed monster" trope, here we have the double-trouble threat of Styx n' Stones. I LOVED Styx n' Stones as a kid. Two-headed villains were freaky and fun! You can see there's some color coding going on to help you differentiate between the two. Styx, on the left has pink coloring, while stones on the right gets red. This extends from their eyes and mouths right on down to their... toenail polish.

And here they all are as a group, good vs. evil, all in a group. I remember obsessively transforming these guys back and forth between their warrior and rock modes. It's too bad the line wasn't more popular because I found these to be genuinely cool to collect and play with as a kid. In addition to the ones pictured in this post, I also owned the aforementioned Nuggit and Stoneheart, as well as Marbles, Slime-Stone, and Pulver-Eyes I will probably not bother to track down ALL of the Rock Lords, but I might try checking some or all of these guys off my list one or two at a time. For now though, I'm pretty happy with the six-pack I currently possess.

What about you? Do you remember Rock Lords? Or do you have some other weird toy line rom the misty memories of your childhood that you feel like didn't get the love it should have?

Well that's it for today kiddos! I'll be back soon with some Geeky Goodwill Goodies (or something else) soon enough, so until then, Happy Hunting!
Posted by Derek Ash at 10:23 AM