A Package From Devin Cönnörs!!!

So I'm horribly overdue on a few things, including the contents of this post... which is a package I received from a fellow named Devin Cönnörs. Devin is a fellow geeky-thrift enthusiast who approached me online with the offer to swap packages. So we did just that!

This of course took place right before the Holiday blitz last year, and I've had some trouble getting my butt in gear to report on everything that I'd been meaning to (I still have stuff from as far back as last FATHER'S DAY you guys...) so instead of me continuing to make lame excuses for the rest of this post let us just delve into the stuff he sent me, shall we? 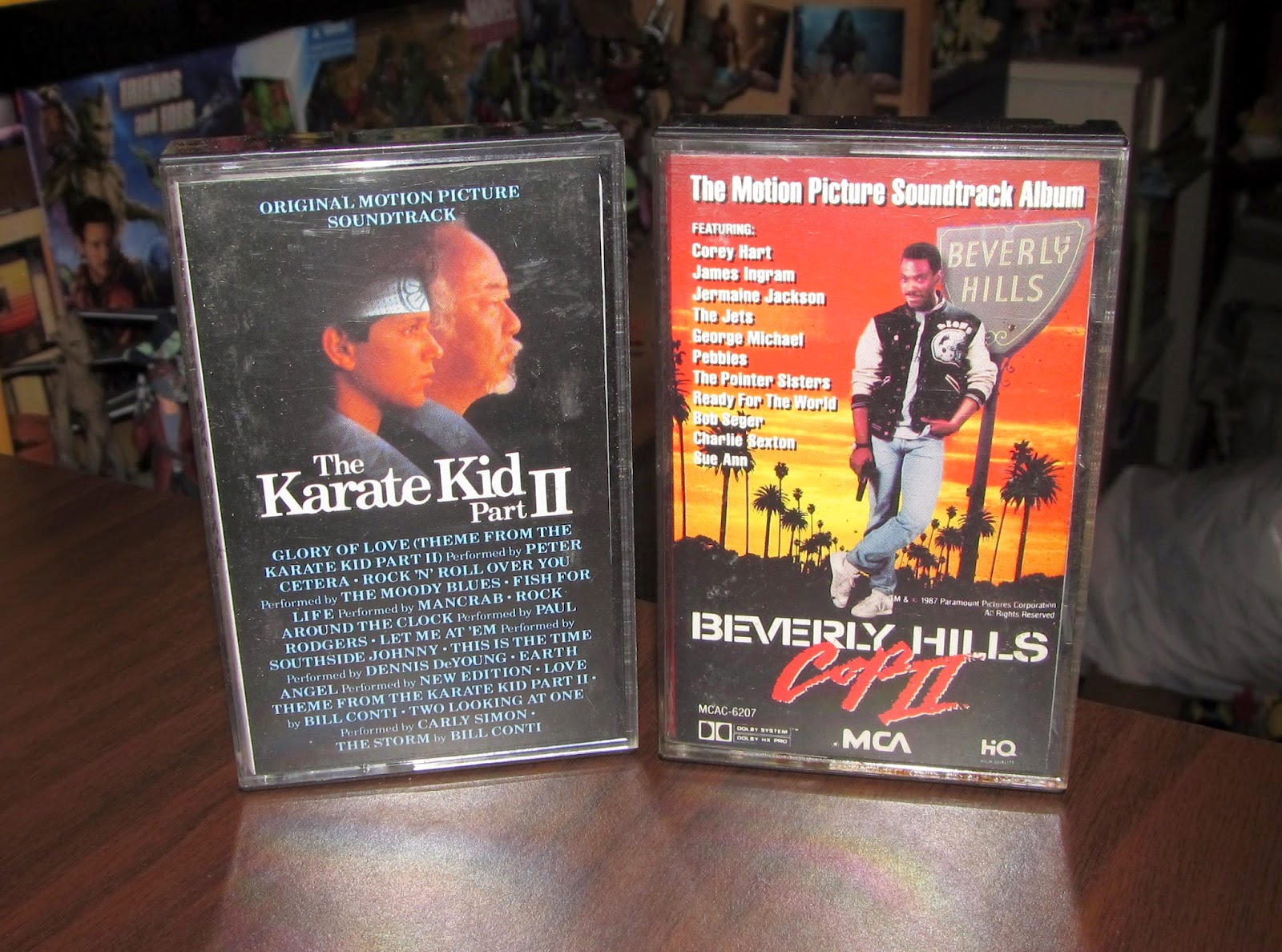 First up are these cassette tape soundtracks for The Karate Kid Part II and Beverly Hills Cop II. These are just awesome. As I mentioned more than once during my Halloween countdown last year, I have become mildly obsessed with collecting old cassette tapes. Soundtracks, novelty albums, and stuff I listened to back in highschool mostly. 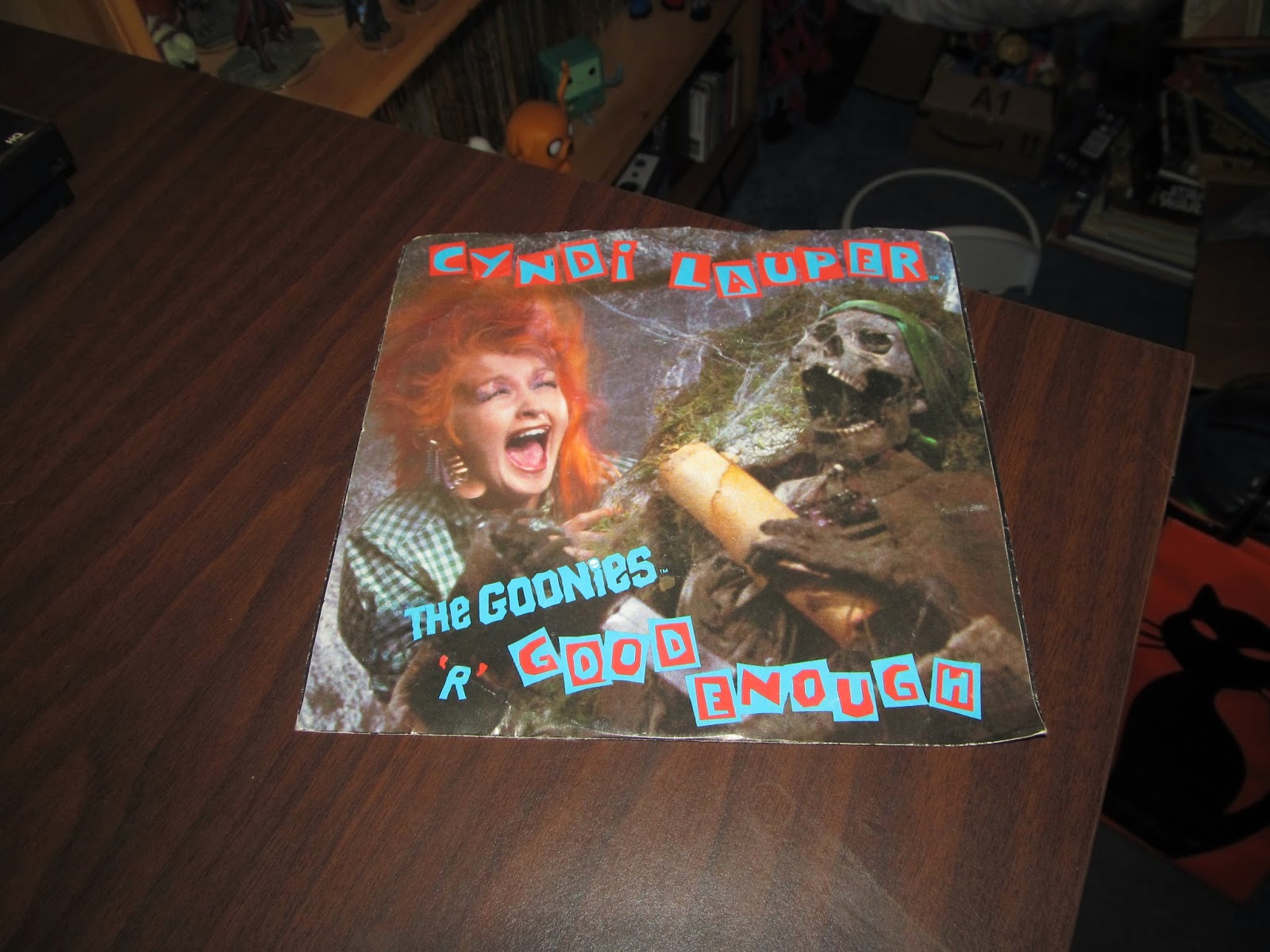 One of the most amazing items included was this 45 record of Cyndi Lauper's "The Goonies 'R' Good Enough. I am a Goonies FREAK and a Cyndi Lauper fan from way back, so this thing made me show my true colors and do the truffle shuffle. 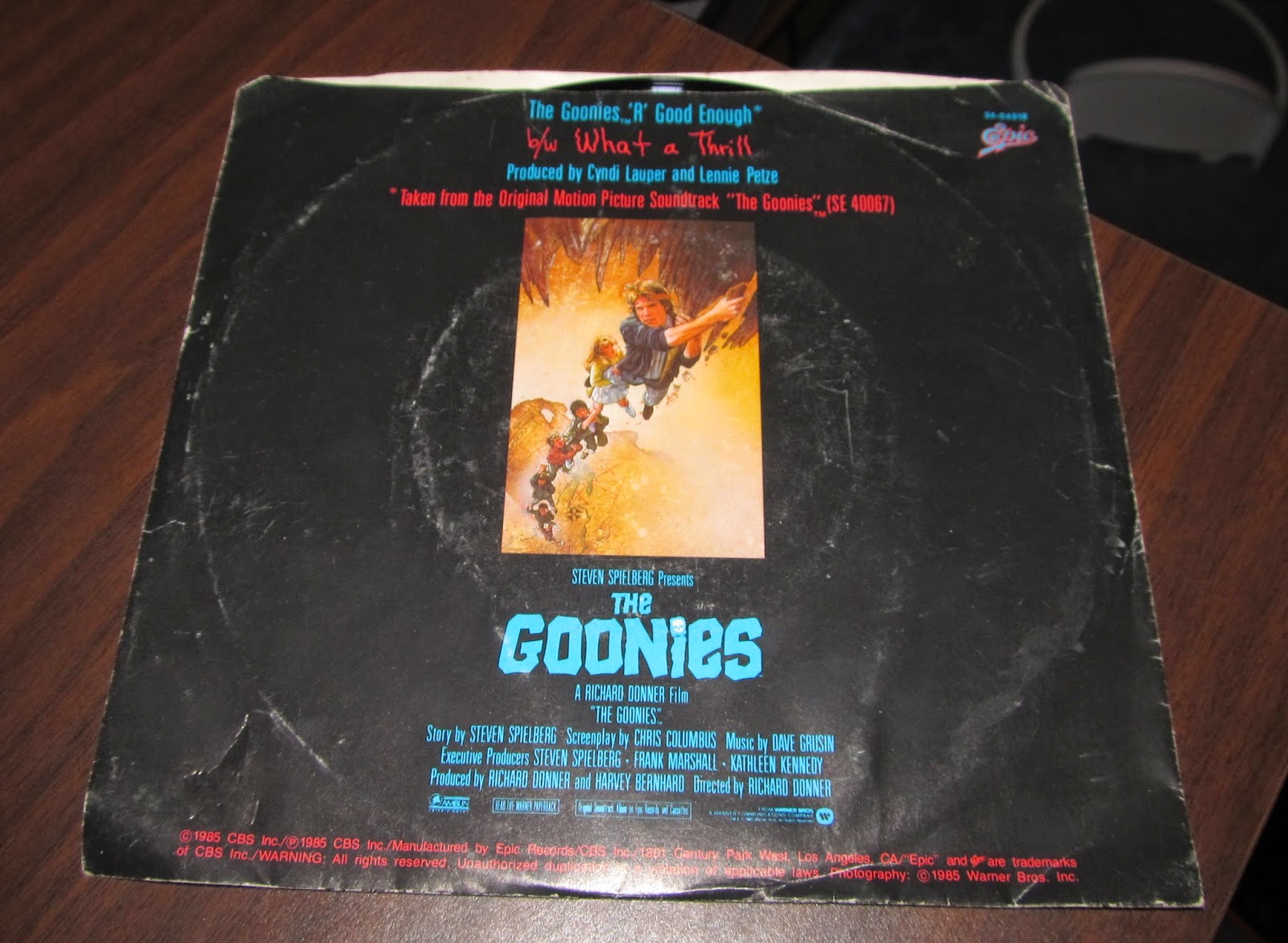 Here's a shot of the back, which includes the classic movie poster artwork, and a b-side recording of "What a Thrill". 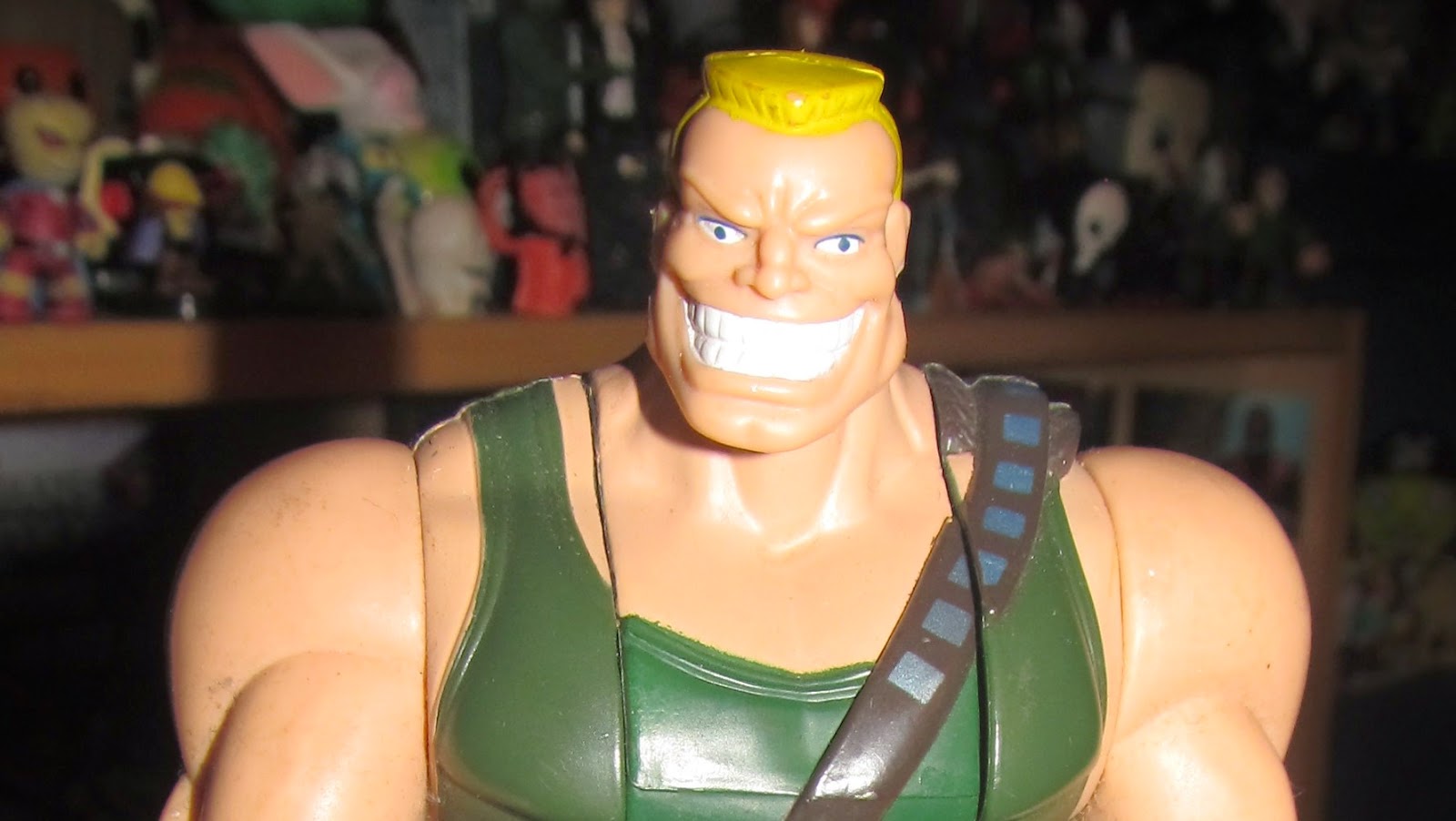 This grinning guy is Brick BAzooka from 1998's "Small Soldiers". I was working as a Toy Department manager for Wal-Mart back when this movie was released, so I remember the HUGE toy blitz it was represented by. This one takes me waaaay back. 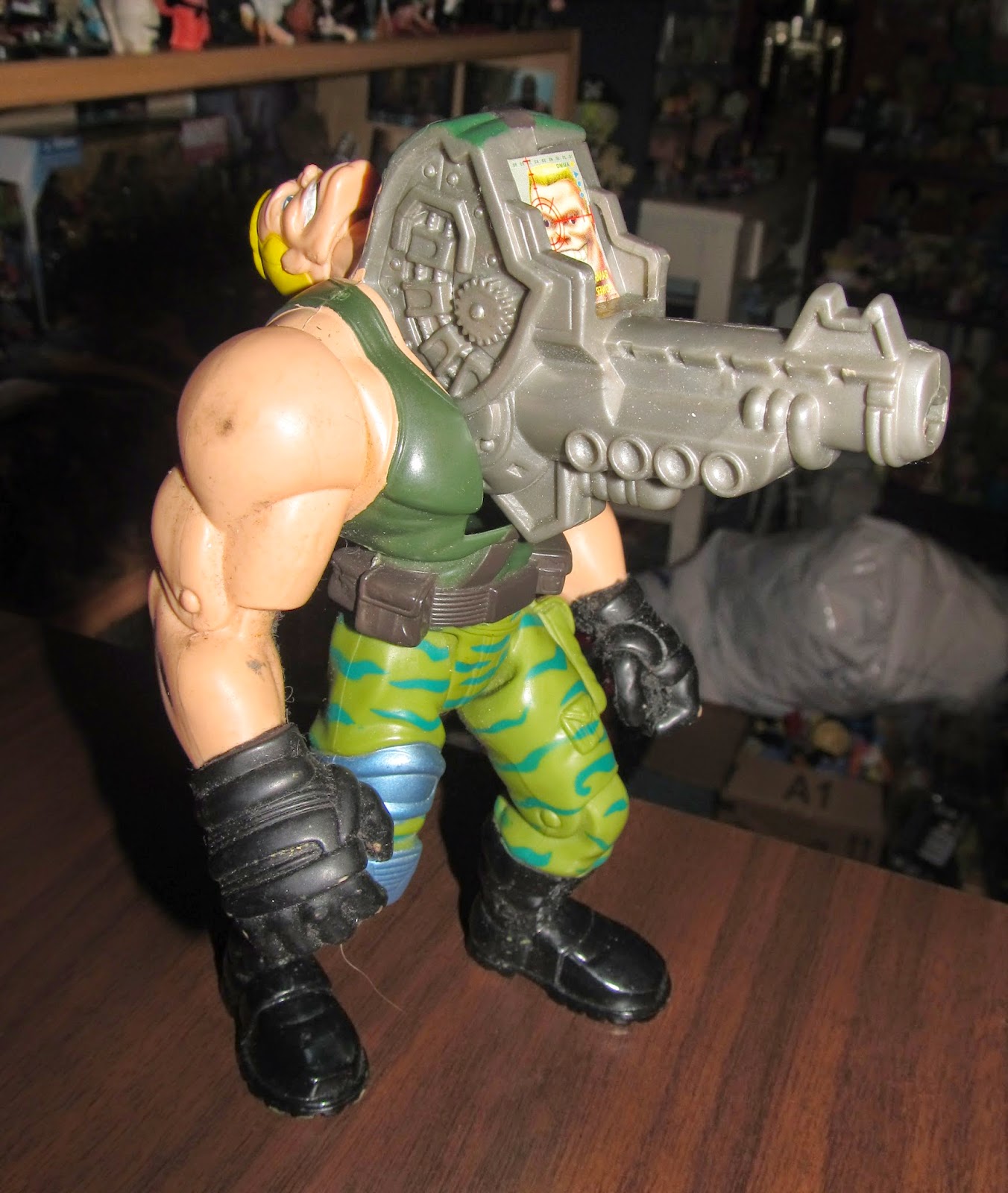 His name ain't "Bazooka" for nothing. Although I never understood how THIS was less freaky than anything the Gorgonites were capable of. I mean, the soldiers were after the monsters because they were freaks right? So how is this normal exactly? 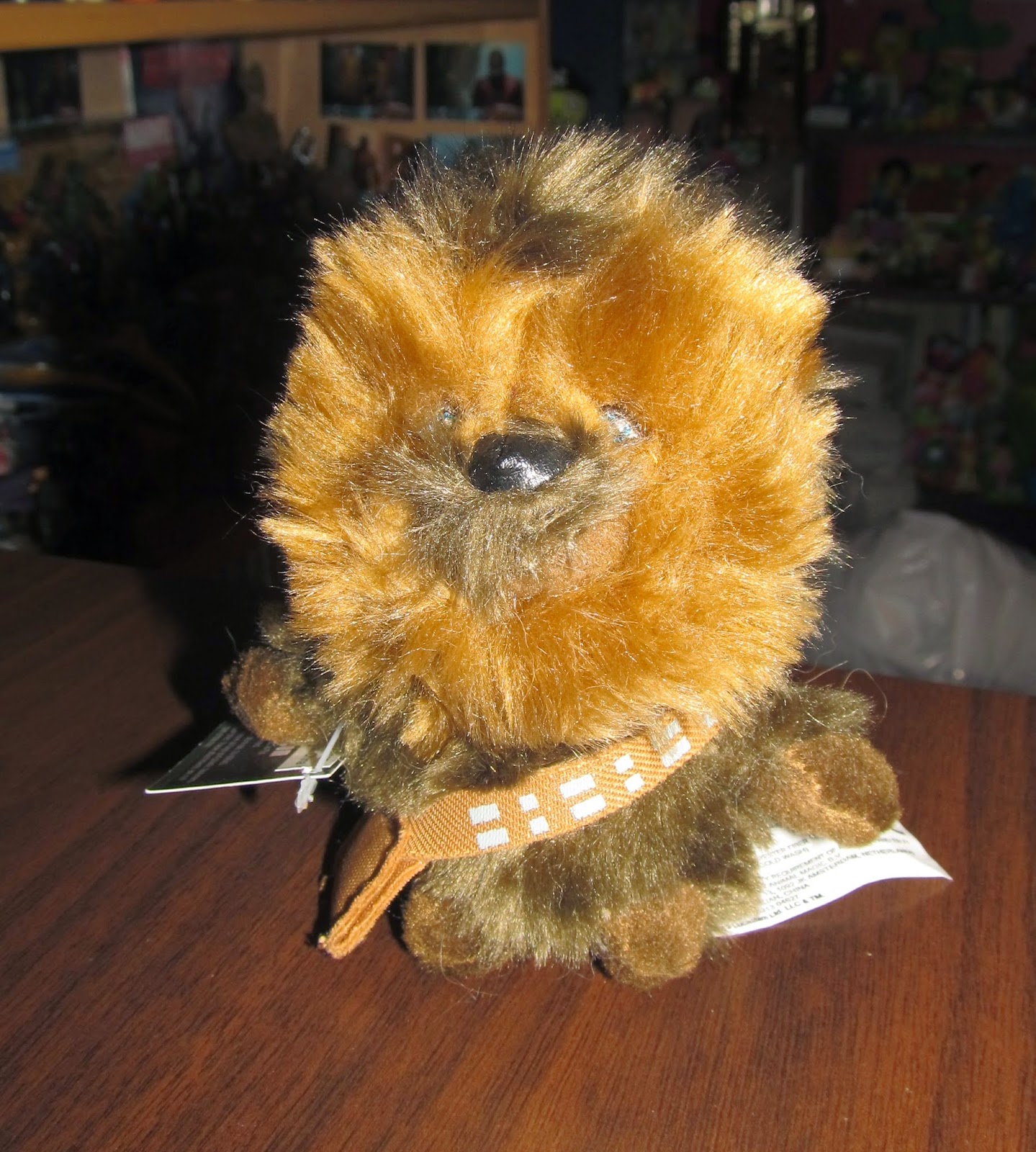 One of my other absolute favorite items in the box was this stuffed chibi Chewbacca. He now resides in a place of pride on my Star Wars shelf. 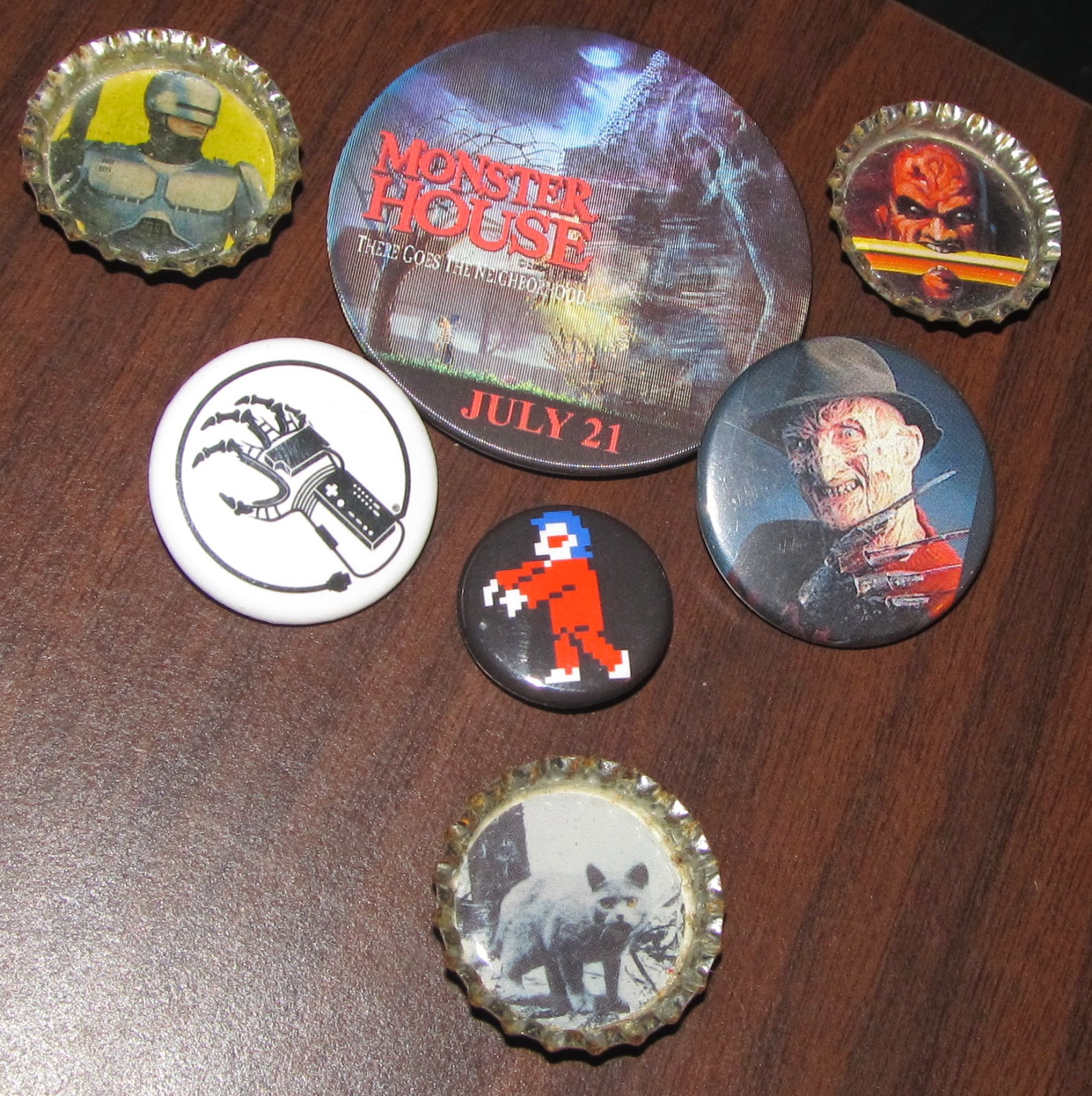 Aso included were these awesome buttons and magnets. The Monster House button is lenticular, showing the house attacking the main characters. Then there's the fantastic Freddy Krueger button and the two awesome 8bit Zombie pins (the clawed Power Glove and pixellated zombie) ALL of which ended up on the interior ceiling of my car. The magnets are all made by Devin himself, using bottle caps, art clippings, and adhesive magnets. I think my absolute favorite one is Church from Pet Semetary, and the one that had me most confused was the Freddy from an advertisement for pencil grippers.... and then there's f**ing ROBO-COP. 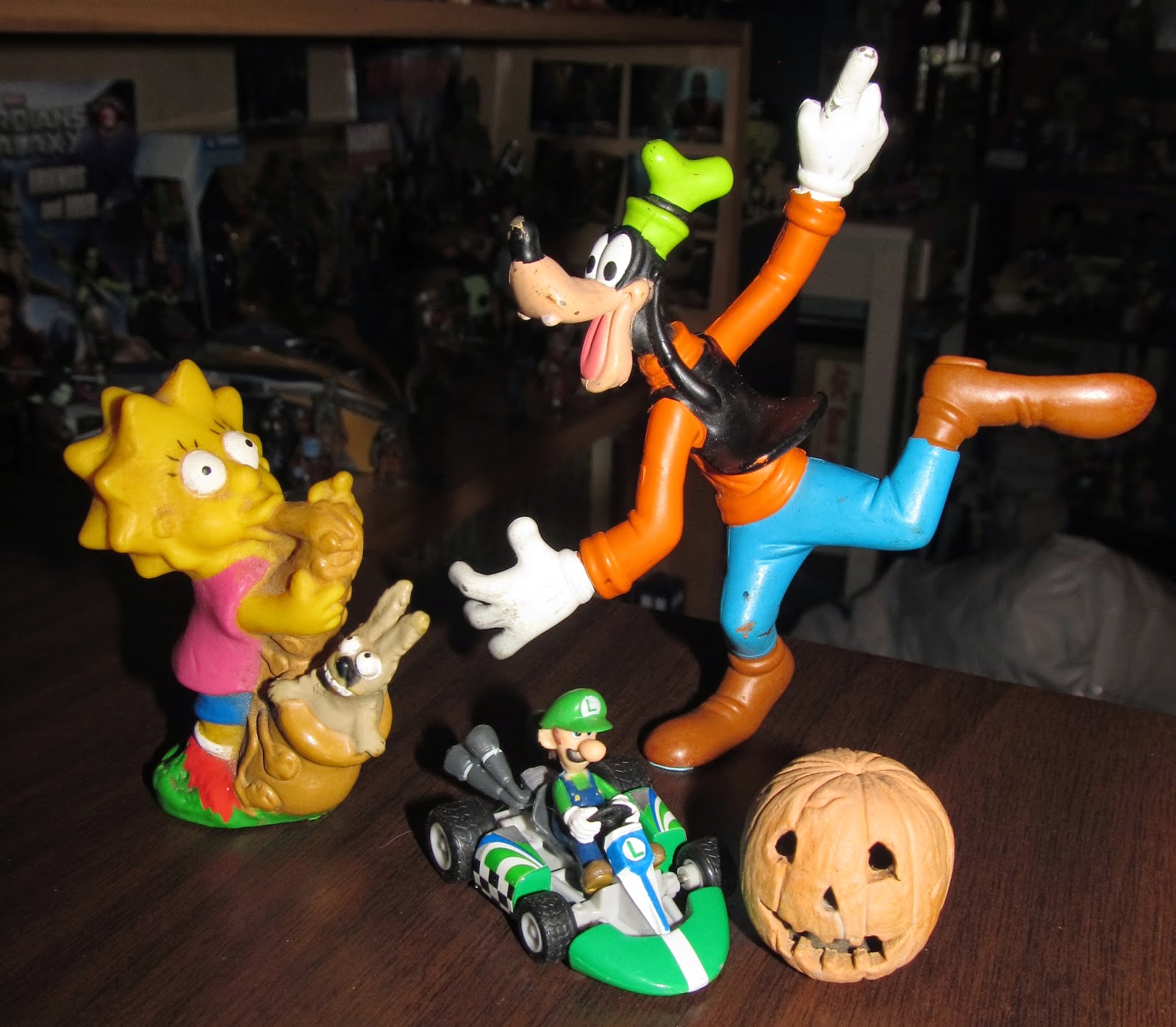 In the toy department we have Lisa Simpson, Goofy, Luigi in a Mario Kart racer, and a Jack 'o Lantern. I love the Lisa figure, as its from the very first set of Simpsons Burger King kids' meal toys, released back in 1989 here in the US and 1990 in Australia. I already own the Marge Simpson from the same set, so now I just need Homer, Bart, and Maggie! 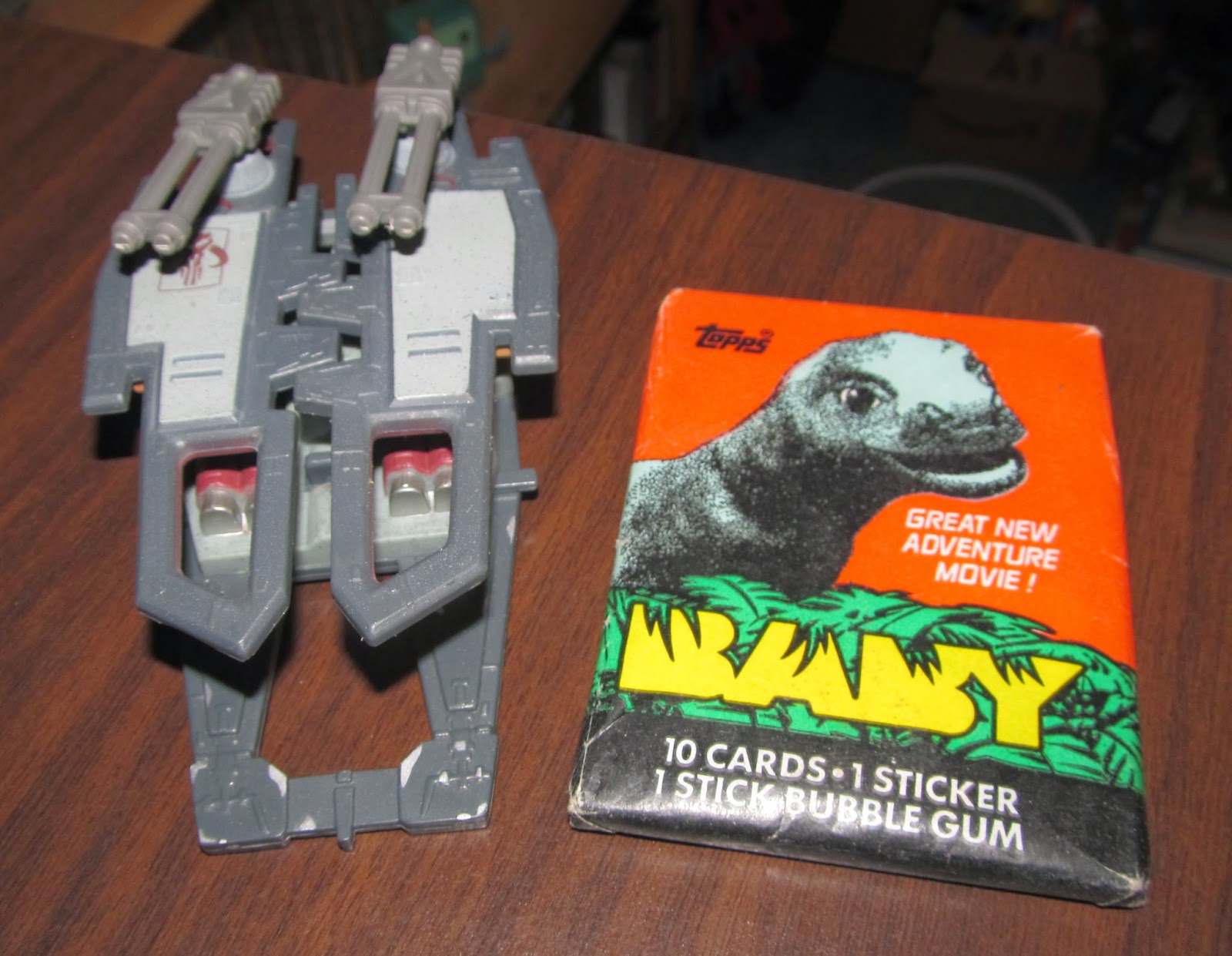 I have no idea what the toy on the left goes to. I know it has something to do with the Mandalorians (it has one of their symbols) from Star Wars, and I suspect due to the color scheme, it has specifically to do with Boba Fett... but I can't figure it out. I assumed at first it went to the Boba Fett Transformer, but I can't find an image of this piece included in that toy anywhere. Even better, IMO, is this wax pack of "Baby" trading cards!!! 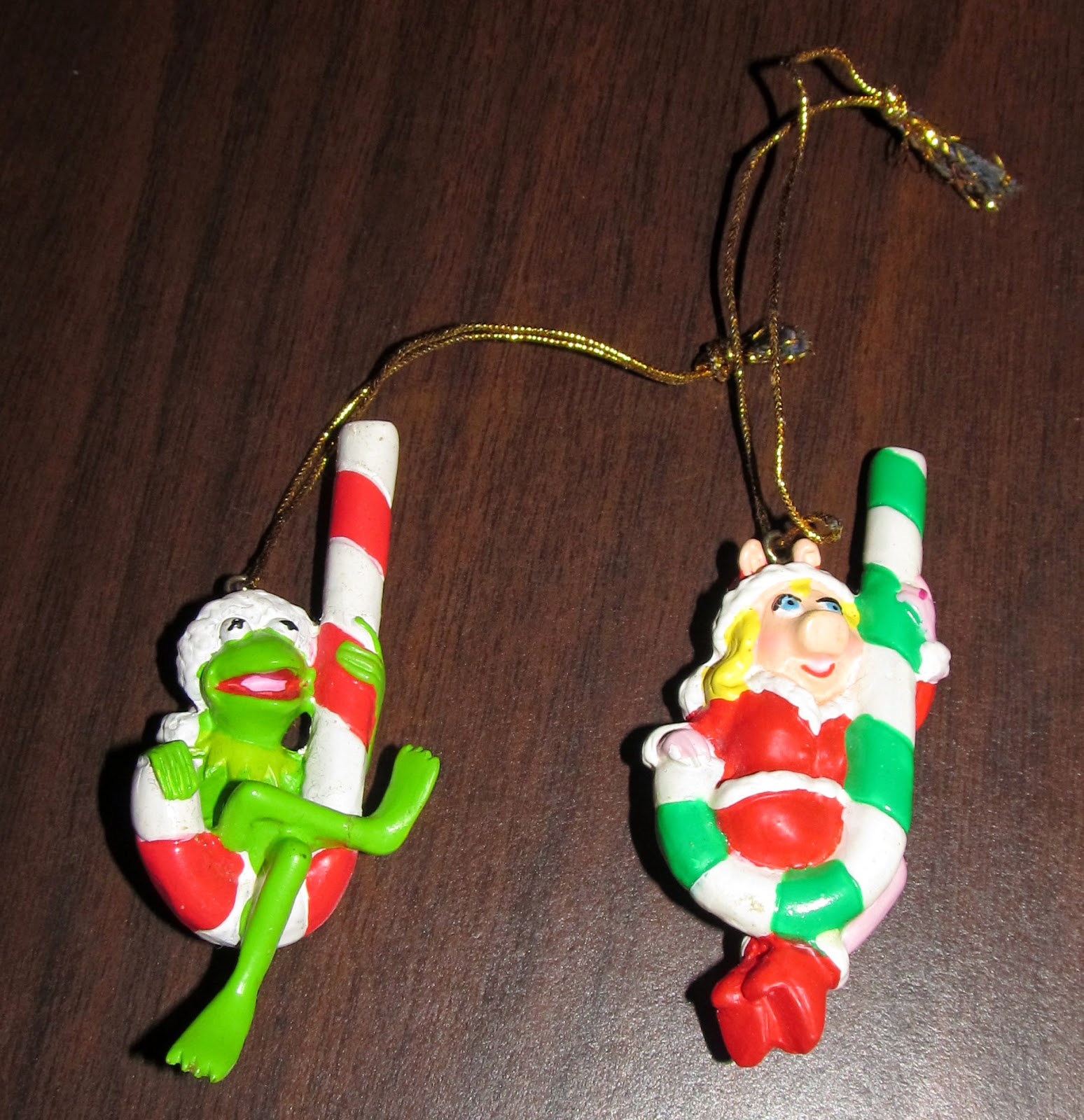 Finally, we have these two Muppets Christmas ornaments, that were in fact included on our Christmas tree this past year! Kermie and Piggy are very welcome additions to our tree for sure! 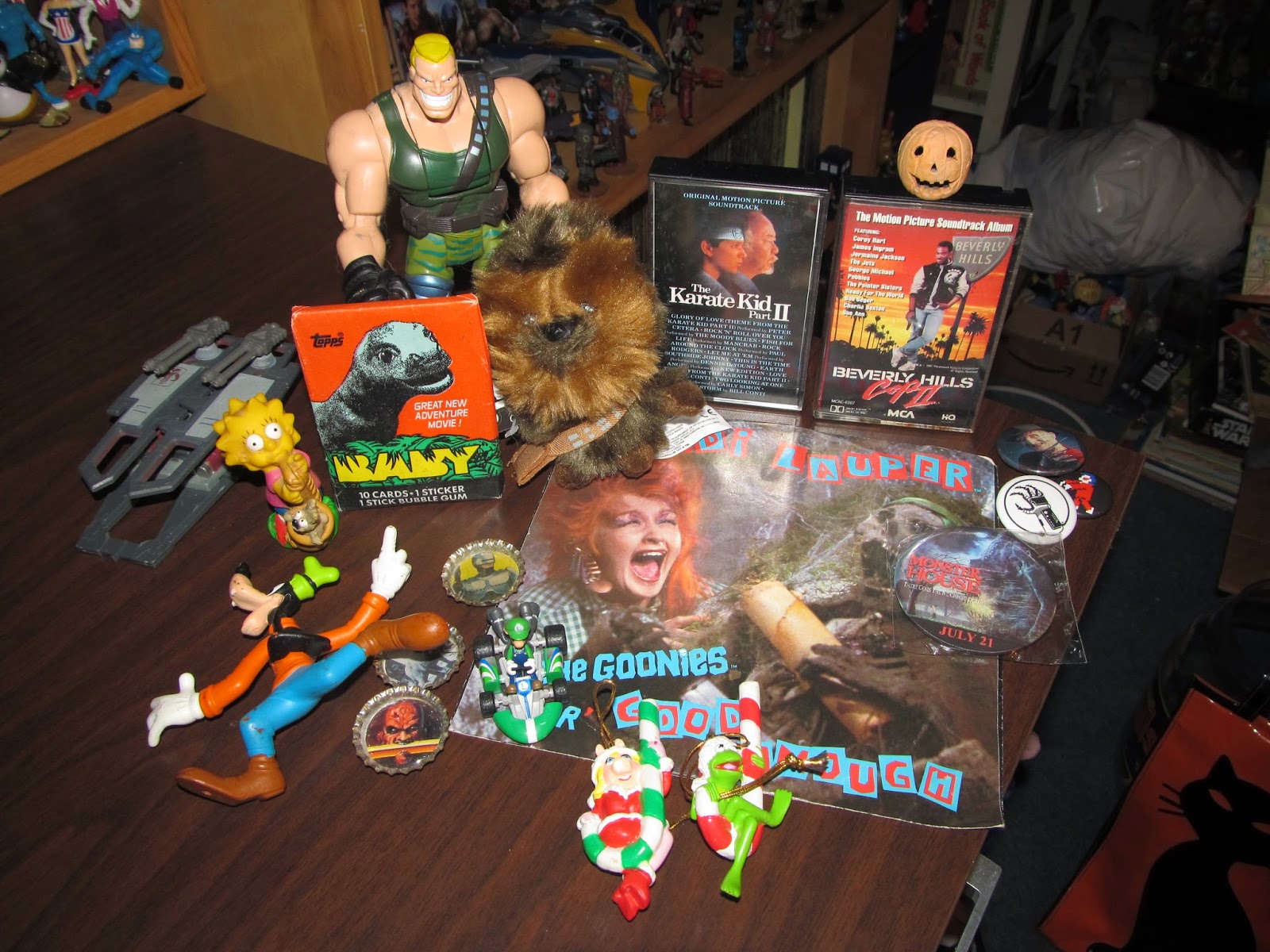 I can't thank Devin enough for the awesome items he included in this package! He obviously put a lot of thought into his selections, and I hope he enjoyed the stuff I sent off to him half as much. Be sure to visit his tumblr which he plans to start using to talk about items he's found.

I'll be back soon with more Geeky Goodwill Goodies... so until then, Happy Hunting!
Posted by Derek Ash at 2:26 PM