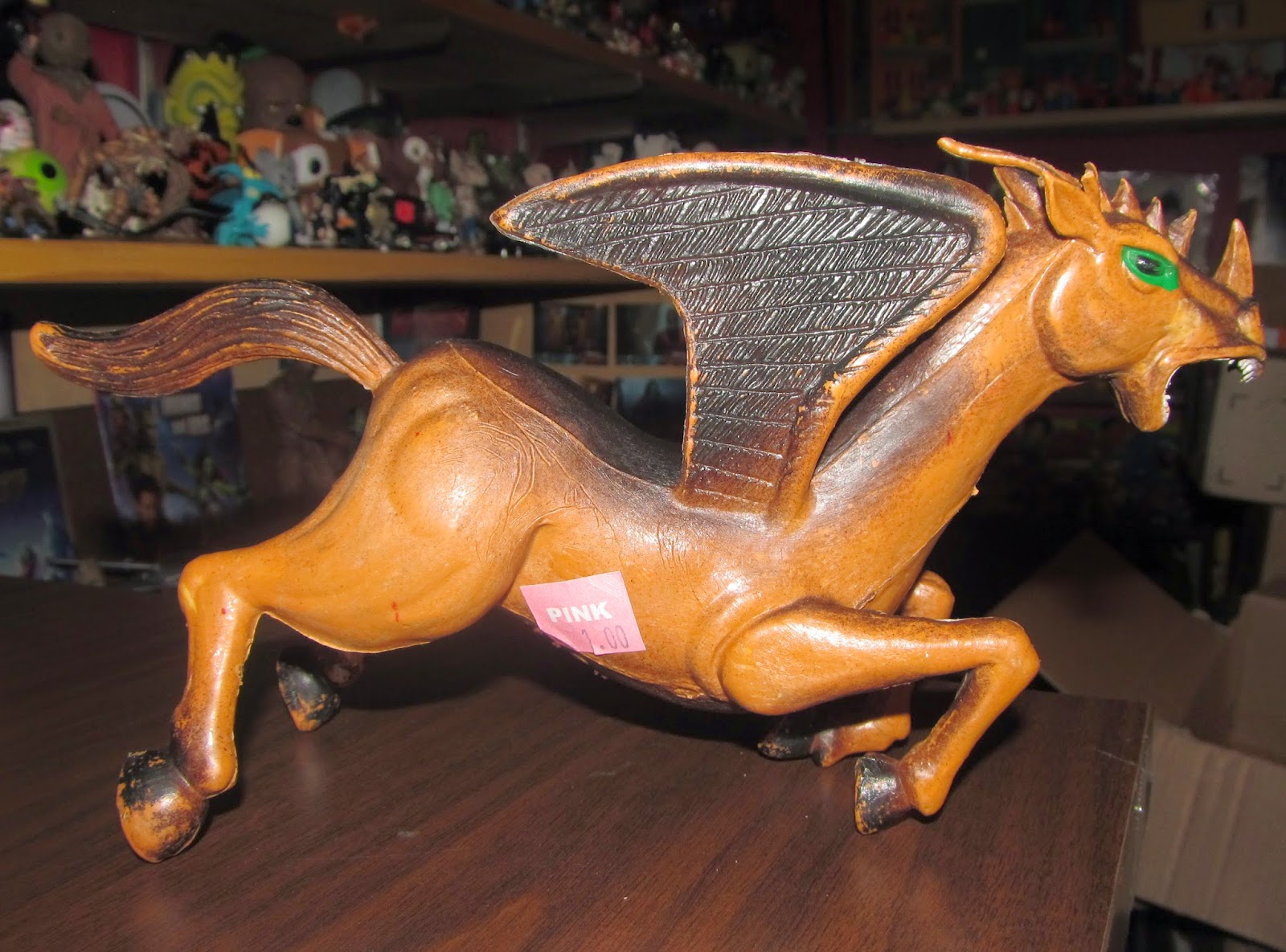 Trotting right out to the front we have this Imperial beauty which, after a little bit of research turns out to be their idea of a Pegasus... but I call bulls--t and say this thing is a Jersey Devil!!! It's meant to stand on its back-legs with the tail propping it up, but when I found it, it was broken off, and so had to be super-glued back into place. I was lucky to even find the tail if we're being honest. Usually that stuff is nowhere to be found, and alas, that would have precluded me buying this guy at that point. But here we are dear reader! Tail glued firmly back in place, this guy looks downright MAJESTIC posed with the rest of my Imperial toys in the cave. 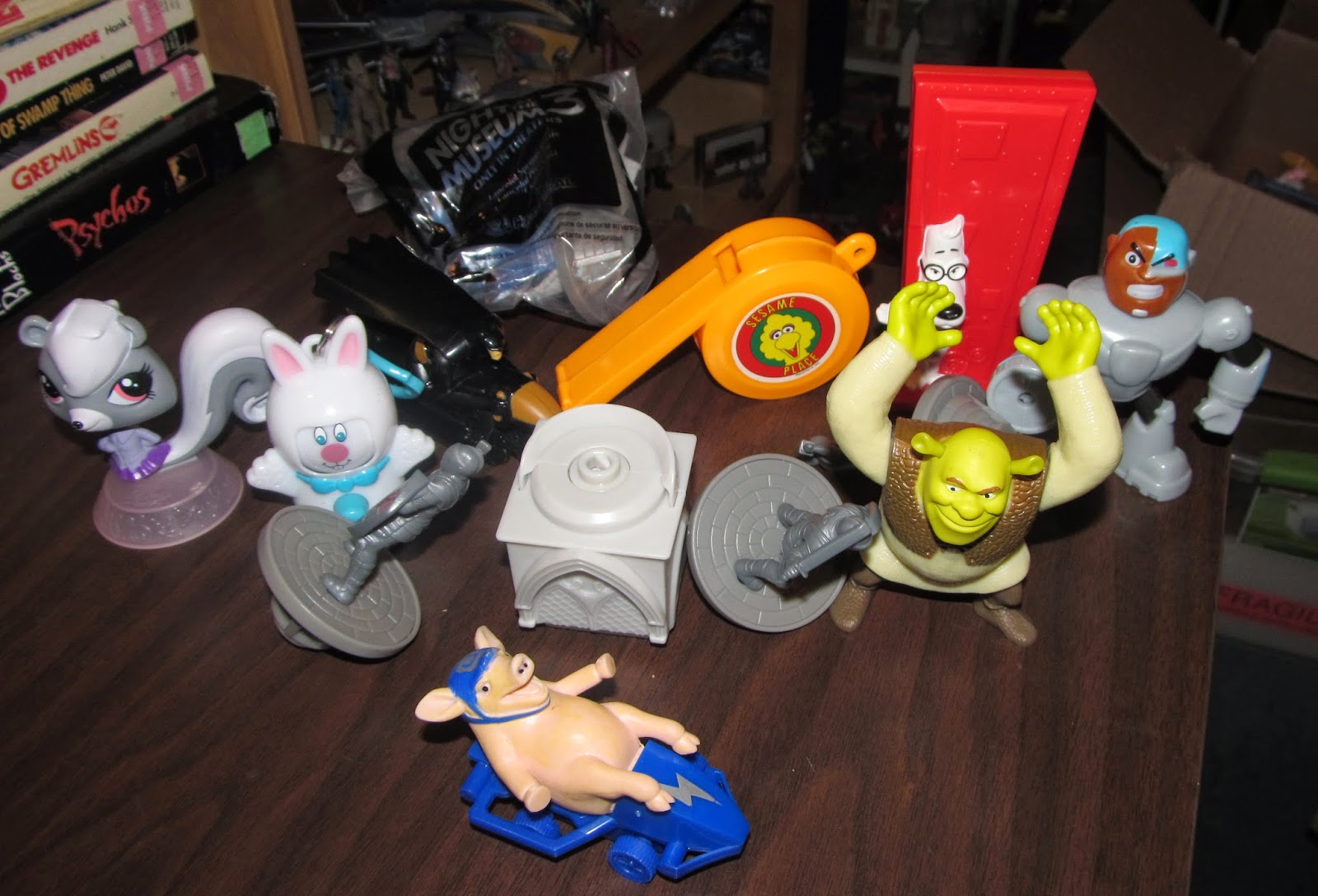 Now let's pick through that grab-bag. HEre are the total contents. We will NOT be going over the entire contents, as there were only a handful of things I even wanted. There was a ridiculous overabundance of Night at the Museum knight/top toys from Wendy's (oh how the mighty have fallen...) and though I don't feature it here, I did end up keeping the Easter Bunny toy because there is a disturbing lack or representation for the Easter Bunny here in the cave. But let's look at the other stuff now: 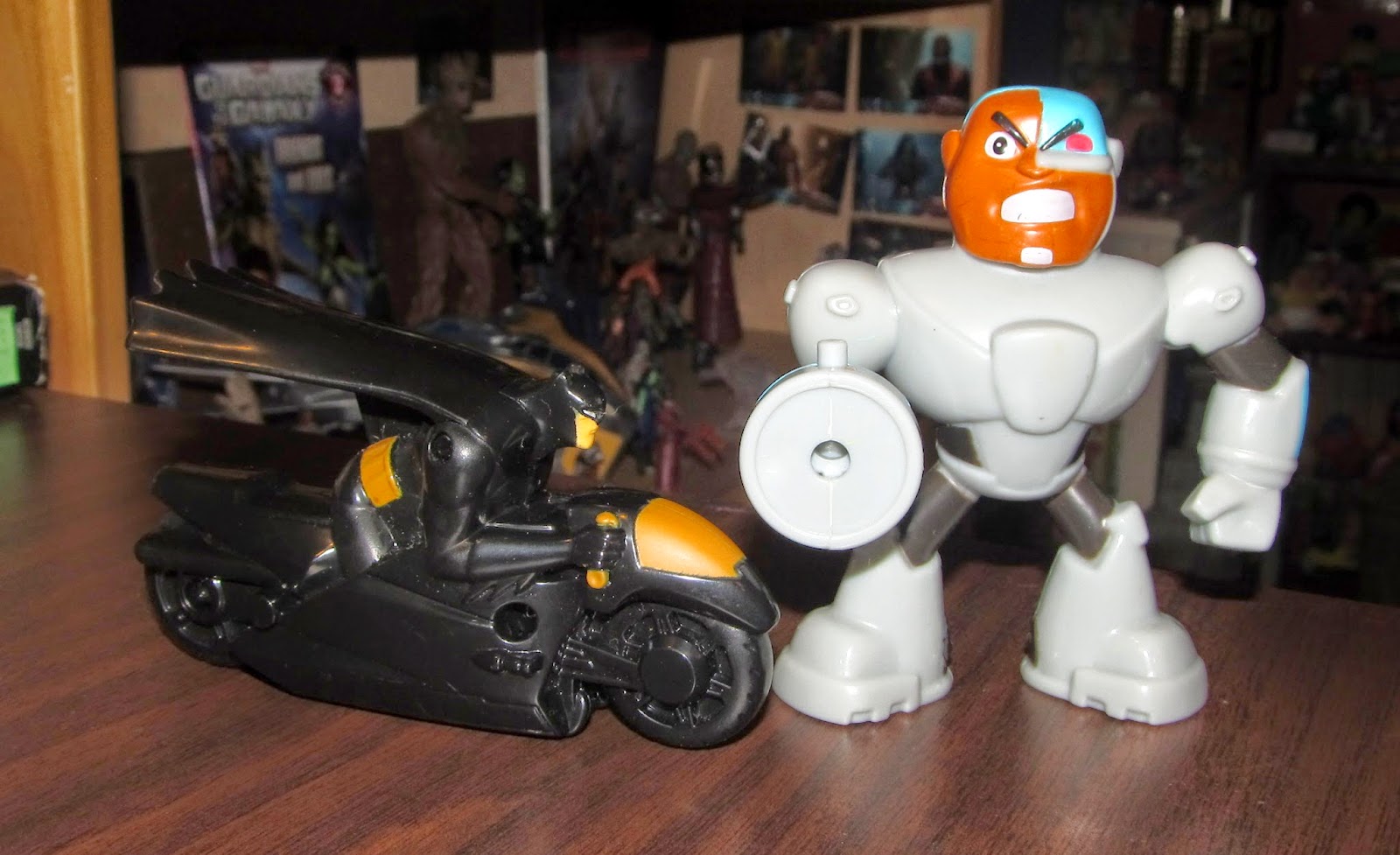 First, flying out of the DCU animated television universe, we have a "Beware the Batman" Happy Meal toy and a "Teen Titans Go!" Cyborg toy. Both of these dudes were judged "worthy" of positions on the Batman/DCU shelves, even if Cyborg is missing his projectile fist. 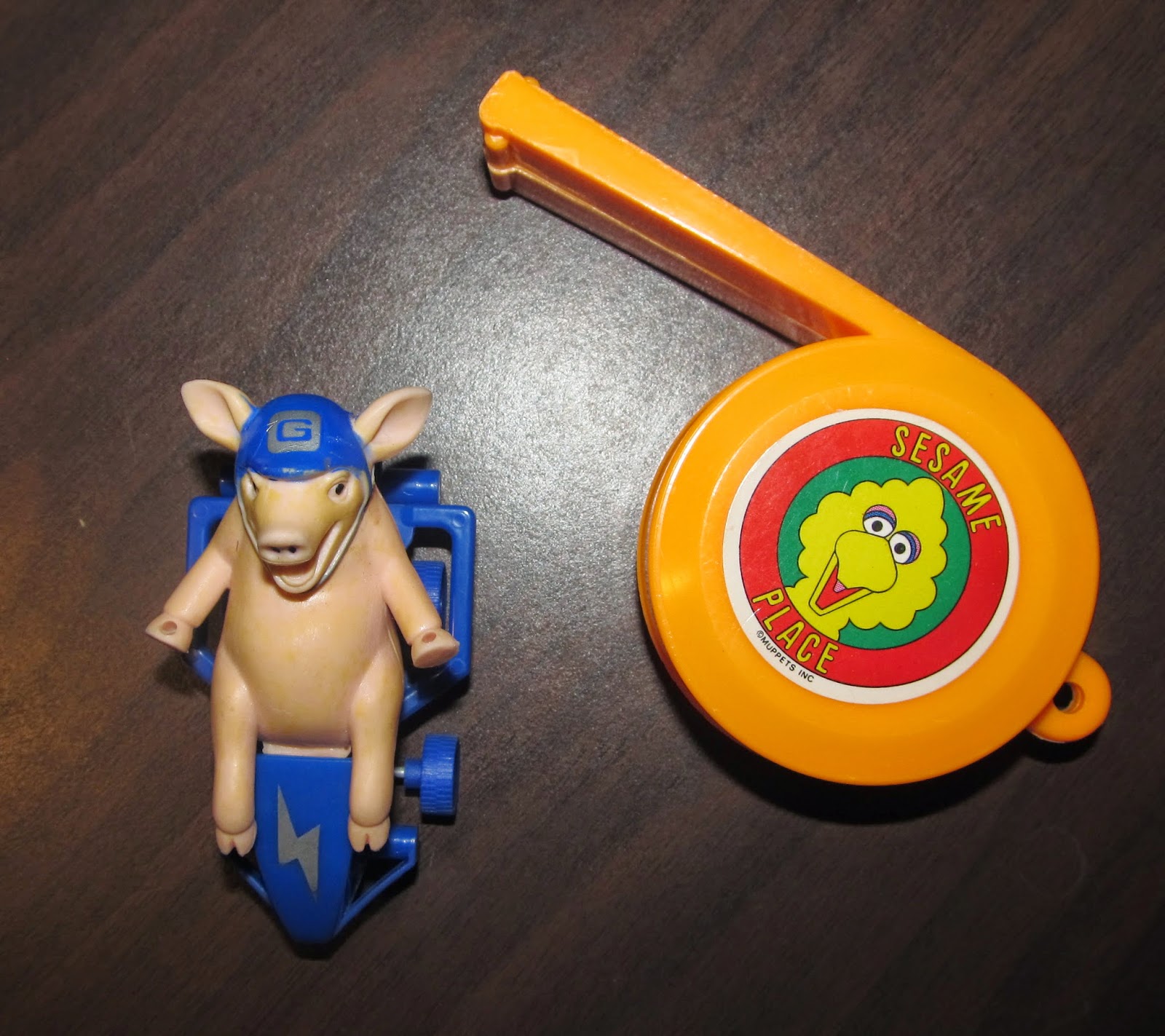 Let's be honest. The reason I bought the grab-bag was for Maxwell the pig here. He's one of the apparently hundreds of spokes-things for Geico insurance. He's somewhat lost his charm as they've begun to overuse him... but back when he first appeared in the "Wheee! Wheee! All the way home." ad... he was HILARIOUS:

And what I originally took to be some sort of bootleg Sesame Street merchandise (Can you tell me how to get to "Sesame Place?") actually turned out to be merchandise from a Sesame Street THEME PARK that I had previously not been aware of. Sesame Place is my Graceland folks. 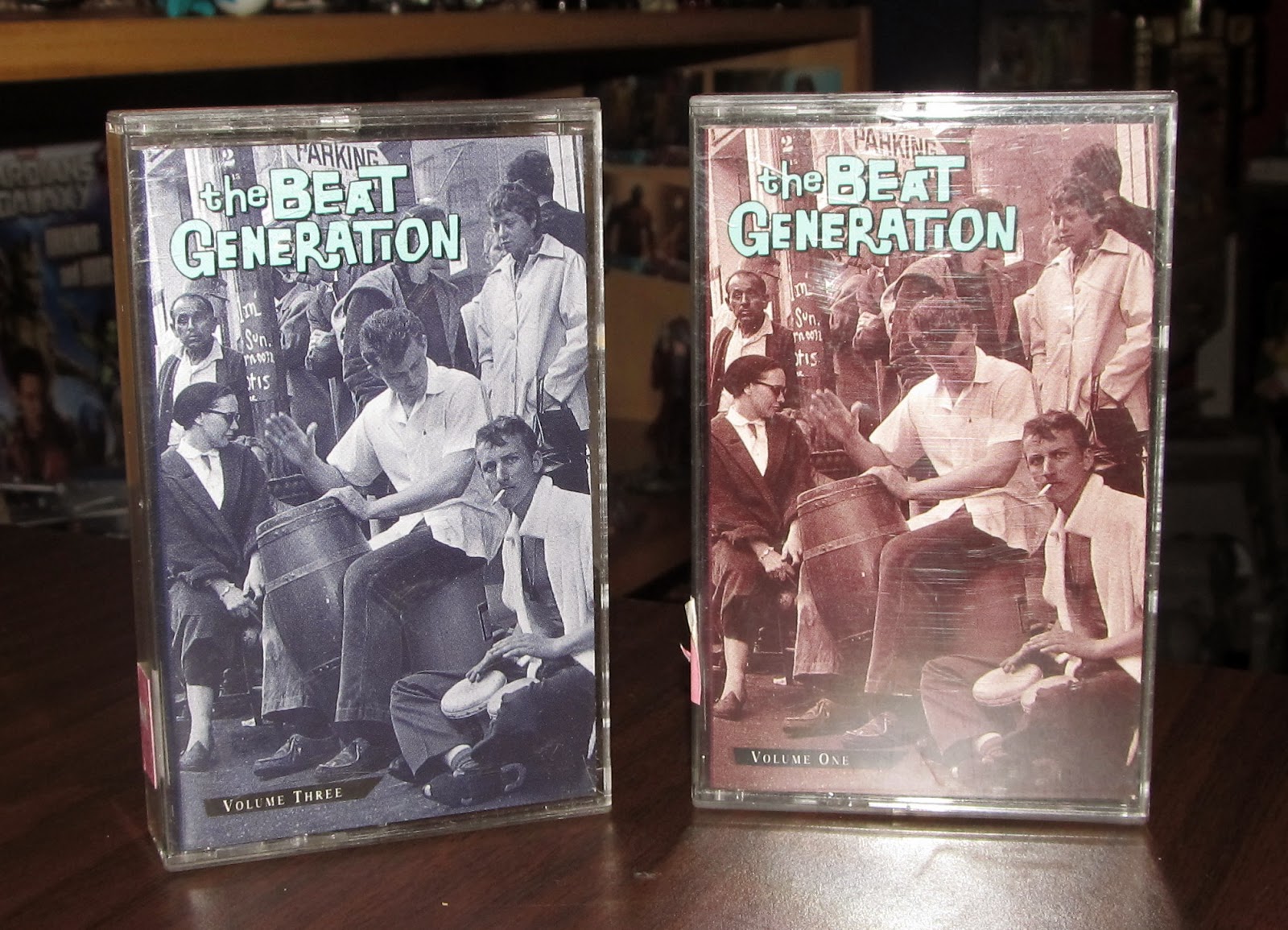 I also found these, which I found fascinating, in the cassette section. "The Beat Generation" vols. 1 & 3 (I did end up finding vol. 2 on another day). Thee include everything from readings from books, songs, and interviews that have to do with the Beat movement. Artists include Kerouac, Burroughs, Gilespie, and more. This is one of those situations that I genuinely regret not actually owning a tape-player to play this stuff on. 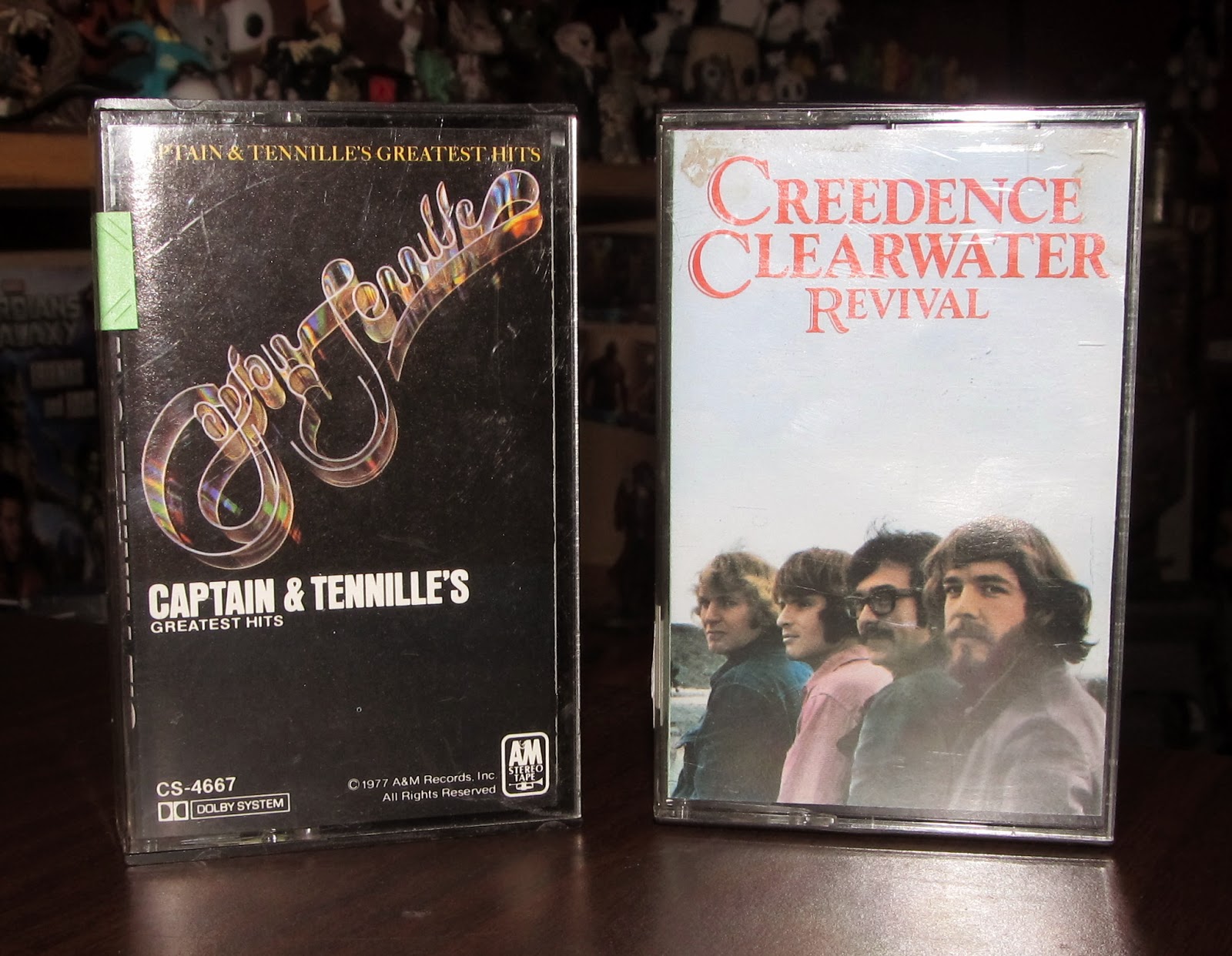 More cassettes include "Captain & Tennille's Greatest Hits", and "Creedence Clearwater Revival". I'm a sucker for music from the late 60's-70's. 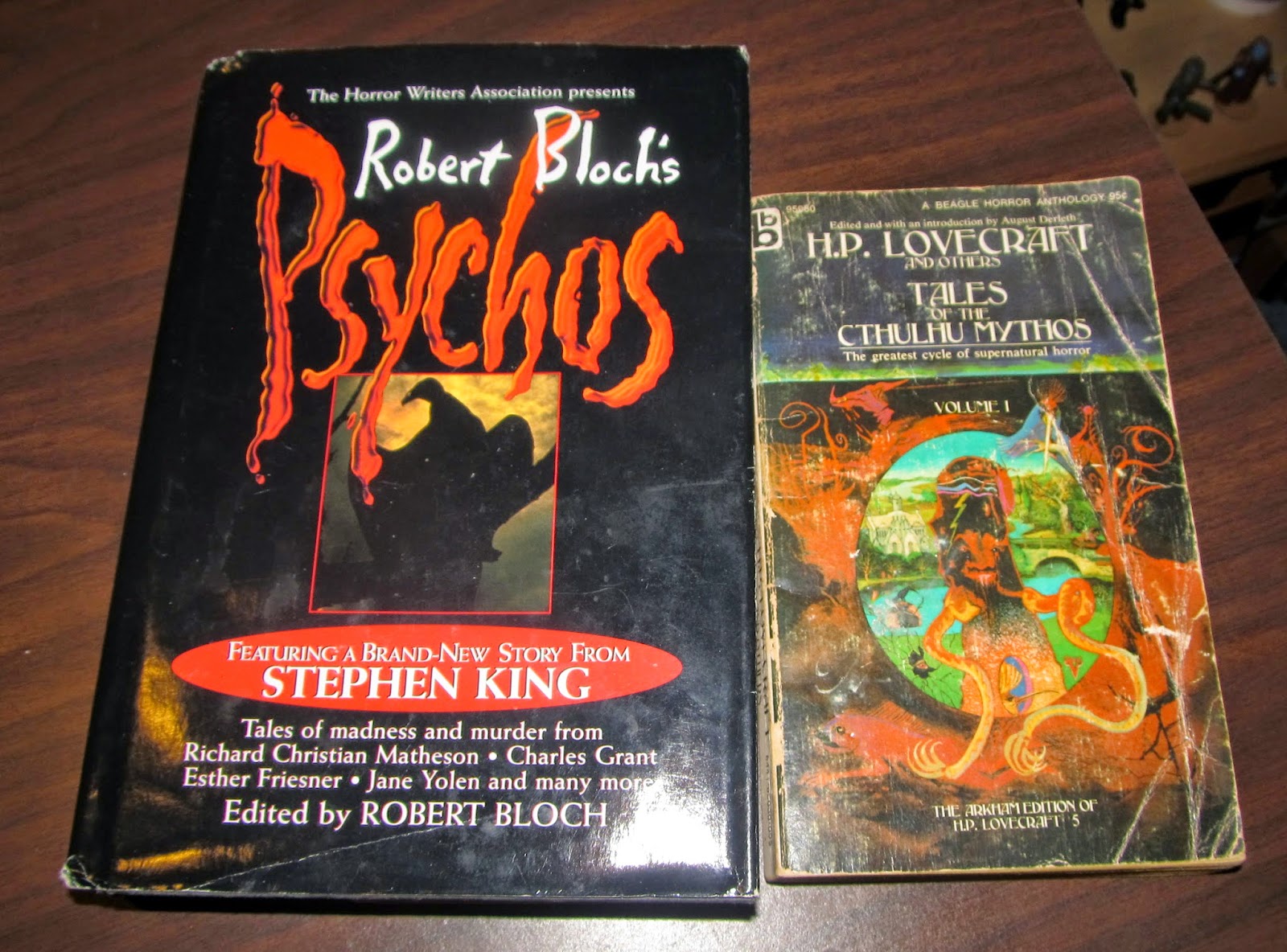 To kick off my book finds from this particular trip, we have the horror anthology, Psychos which I promptly added to the Halloween read pile for this fall... and Tales of the Cthulu Mythos which is really interesting to me because it is an anthology containing not only H.P. Lovecraft's tales, but stories from other writers who have borrowed Lovecraft's concepts for their own, building on them. 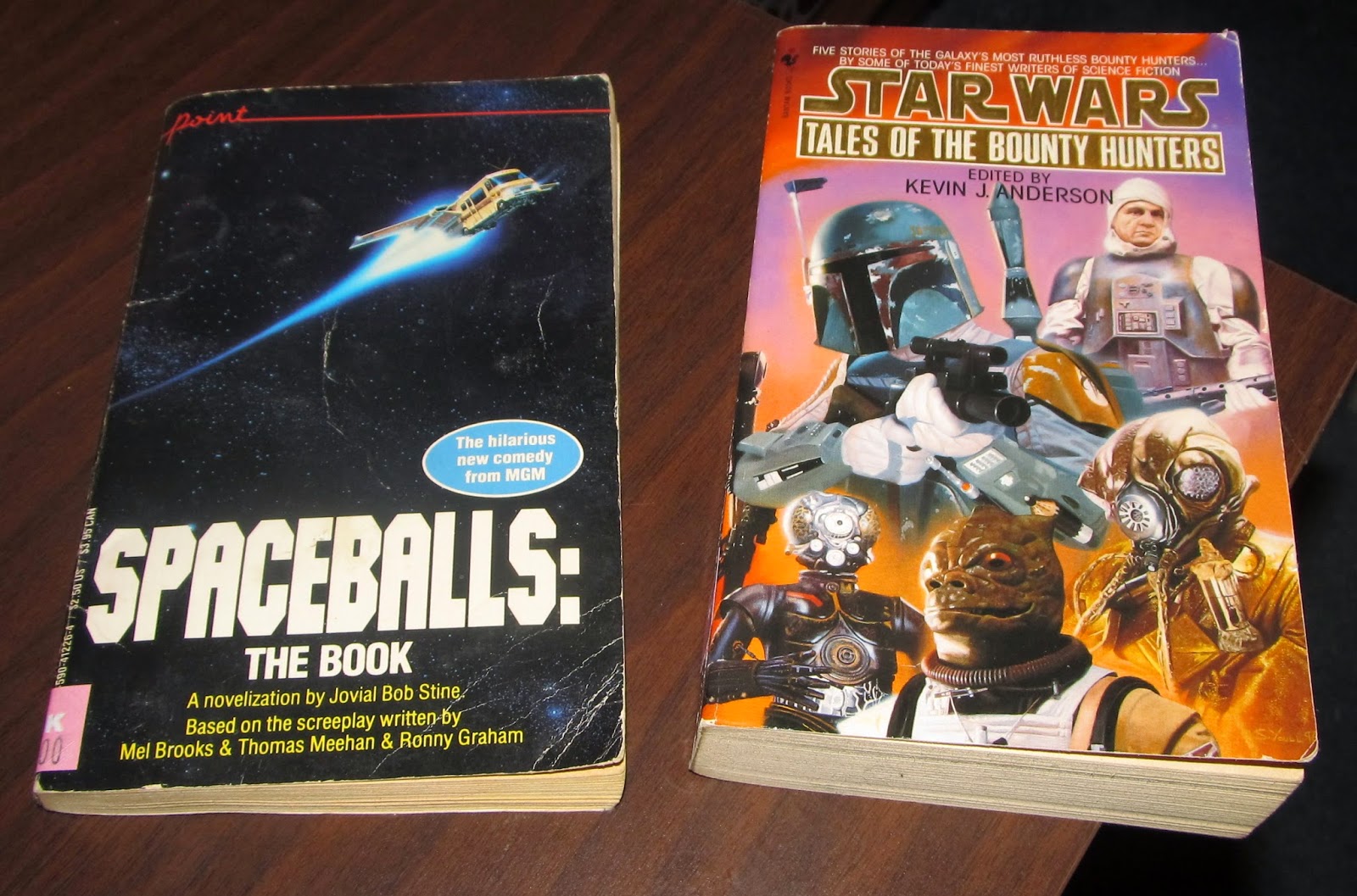 I found an extra copy of Spaceballs: The Book and the strangely appropriate companion volume of Star Wars: Tales of the Bounty Hunters which is a Star Wars anthology of EU fiction that I just couldn't pass up. I've mentioned my disinterest in most Star Wars EU stuff here in the past, but The Mos Eisley Cantina, Han Solo, and Lando Calrissian have all made me contradict that in the past, and no so have the Bounty Hunters. 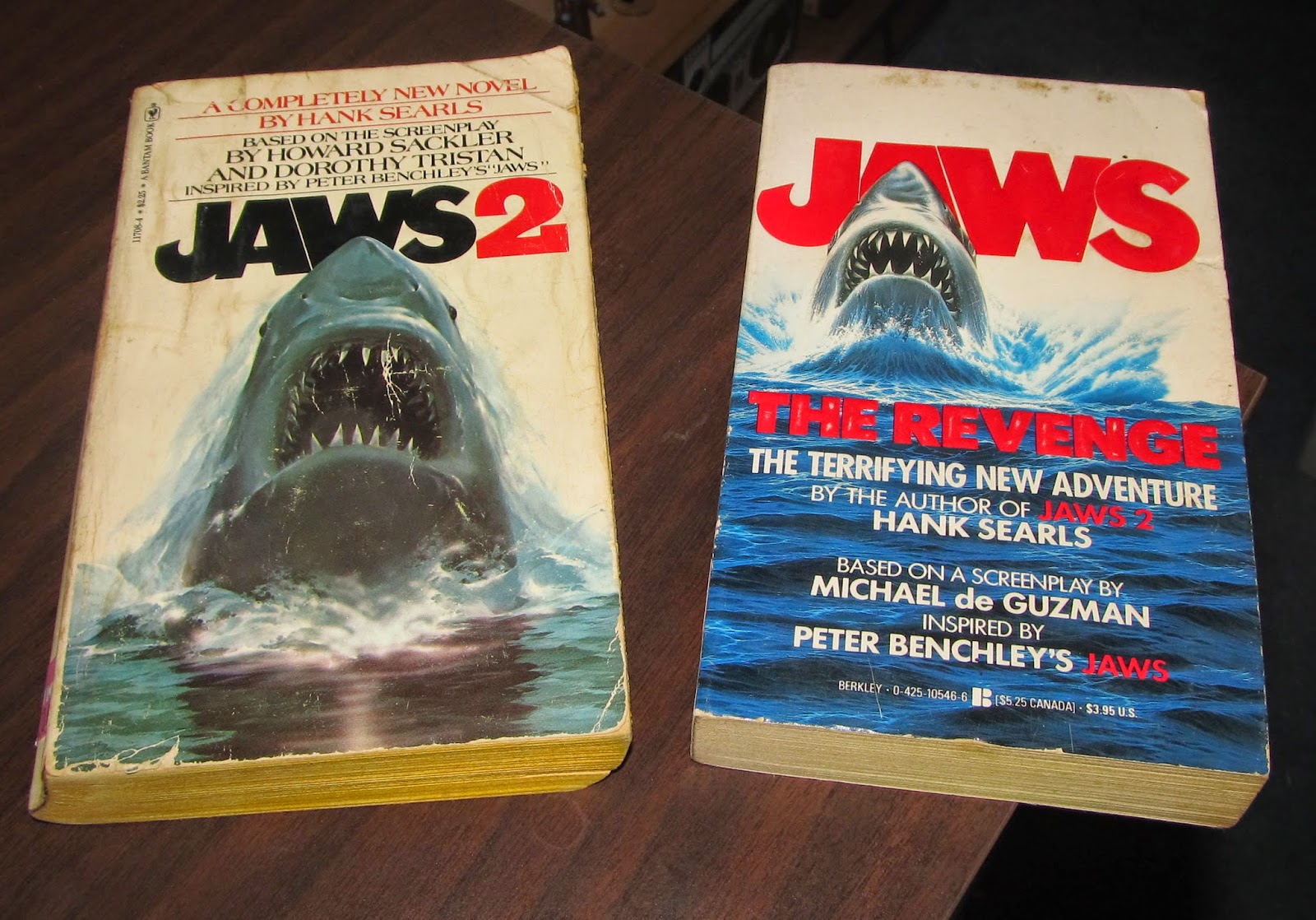 I found these novelisations of Jaws 2 and Jaws: The Revenge and almost peed a little. My friend Miss M over at the Diary of a Dorkette blog (and podcasting companion on both Geek Fallout and Eclectic Mayhem) is a big fan of all things Jaws, and that interest has infected me as well. Her favorite was Jaws 3 and I was disappointed not to find that particular volume... but still. 2 Jaws books are pretty great. But I have to be honest... I was even MORE excited to find the NEXT two novelizations: 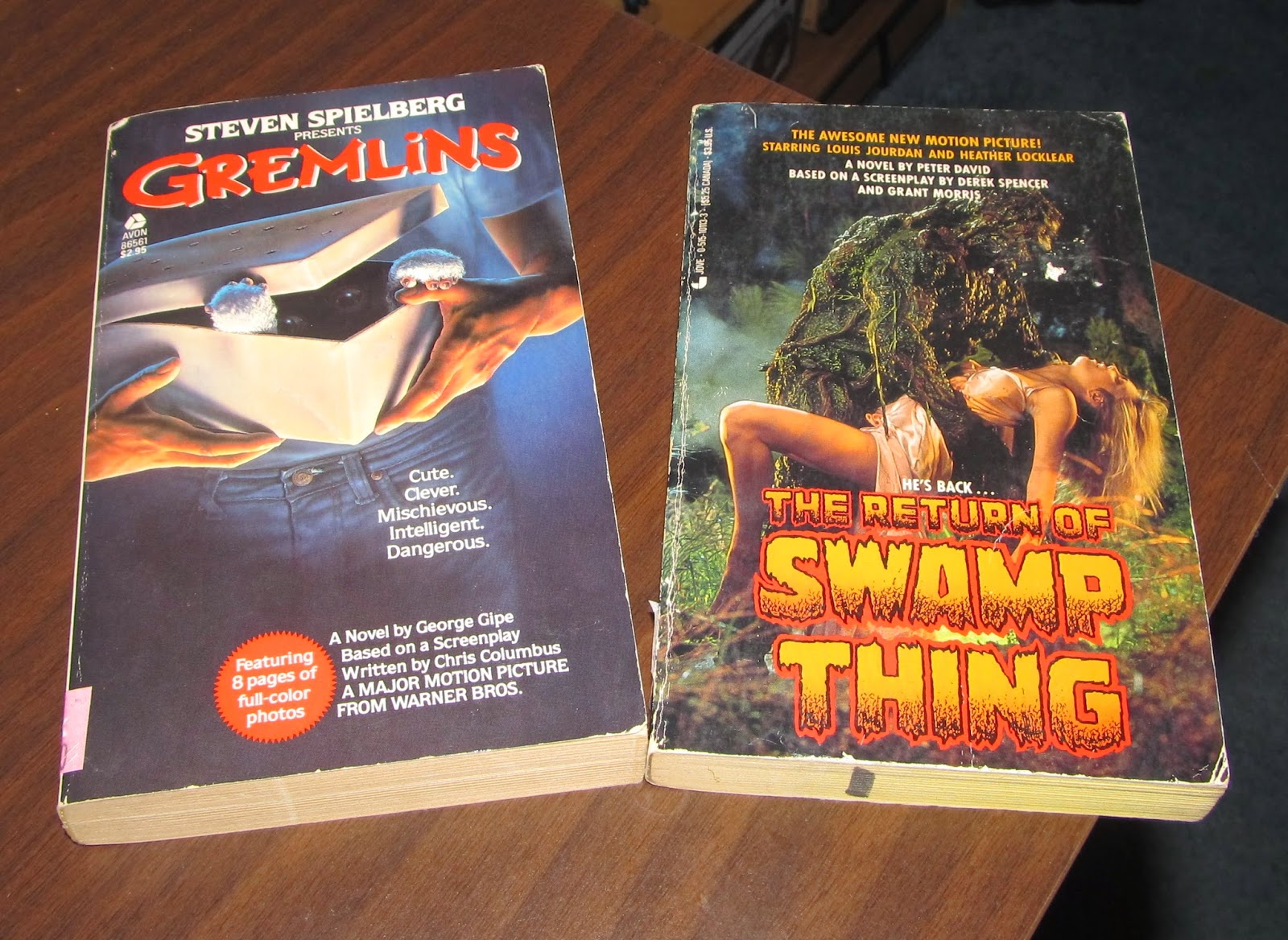 Gremlins and The Return of Swamp Thing!!! Again, potential urination threatened. And Peter David wrote the Swamp Thing one!!! Can I just say how much I adore the Swamp Thing live-action costume? Man that thing is gnarly, both literally and figuratively. 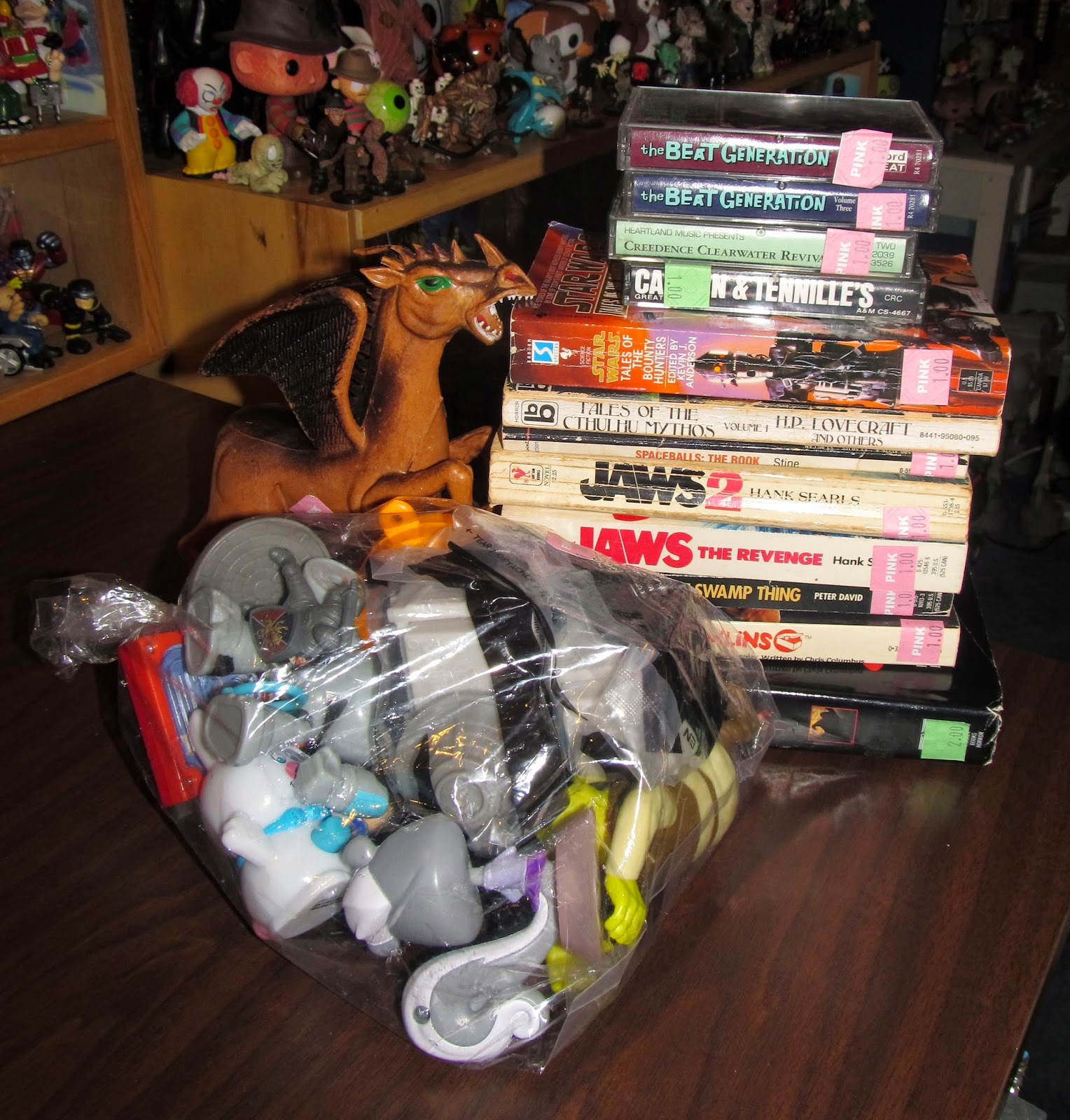 So that's it kiddos! Between that Jersey Devil toy, the Geico-pig toy, and those kick-ass novelizations, I was pretty pumped to bring home this particular haul!

I will be back (hopefully sooner rather than later...) to share more Geeky Goodwill Goodies with all y'all! Until then, Happy Hunting!
Posted by Derek Ash at 5:38 PM