So we recently made a trip out to Bangor, ME. On the way I hit the Nice Twice thrift shop in Ellsworth, and both the Brewer and Bangor Goodwills. Here's what I brought home from those three stores: 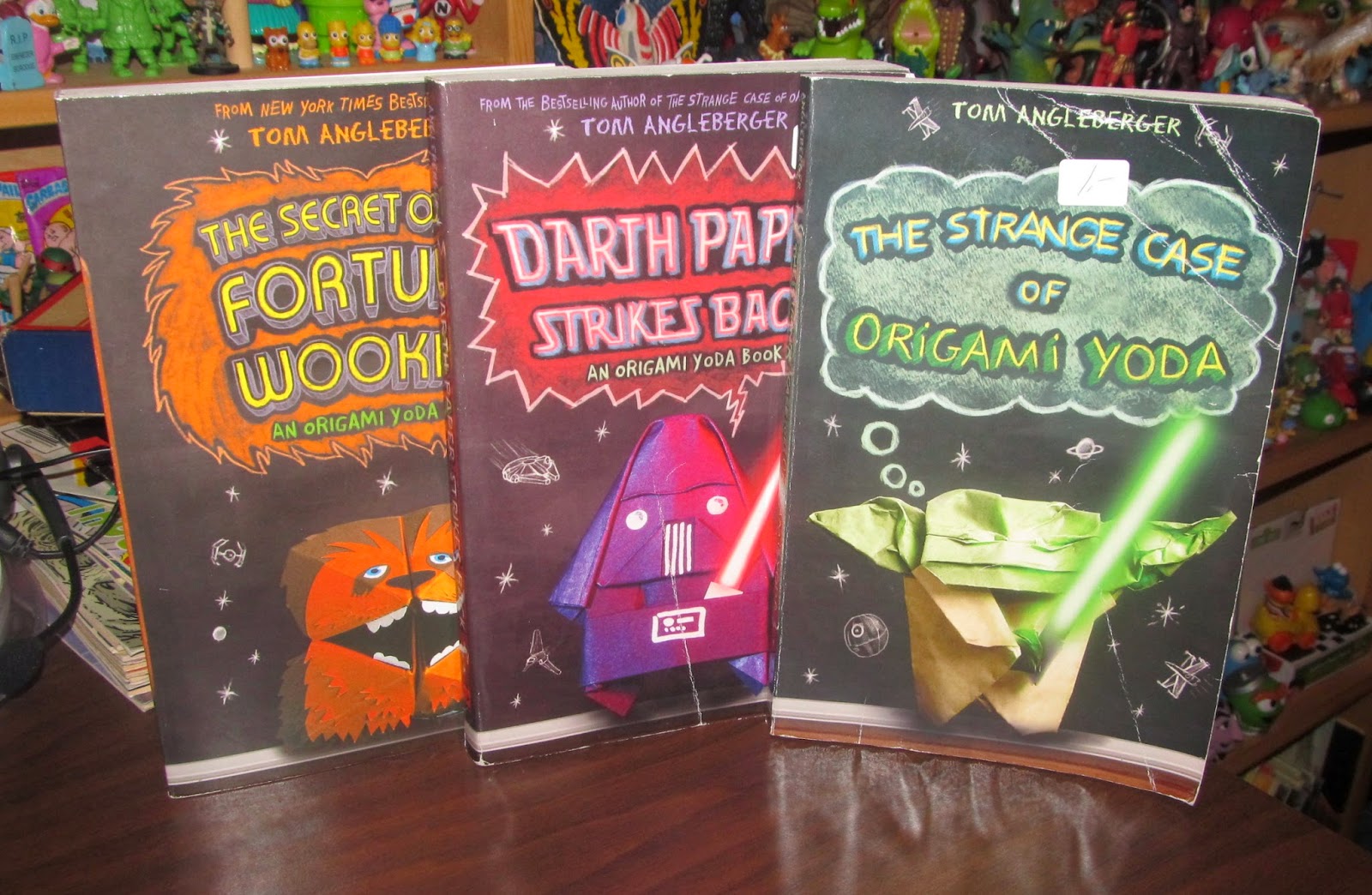 First, at Nice Twice I found this trio of "Origami Yoda" books. I've been curious about them for a very long while now, and seeing all three of them there for a buck apiece? I couldn't resist. So I'll let you guys know what I think of them at some point in the future. But the exceptionally odd premise (a series of middle-school mysteries based around Star Wars paper-crafts? Yes please.) is more than promising. 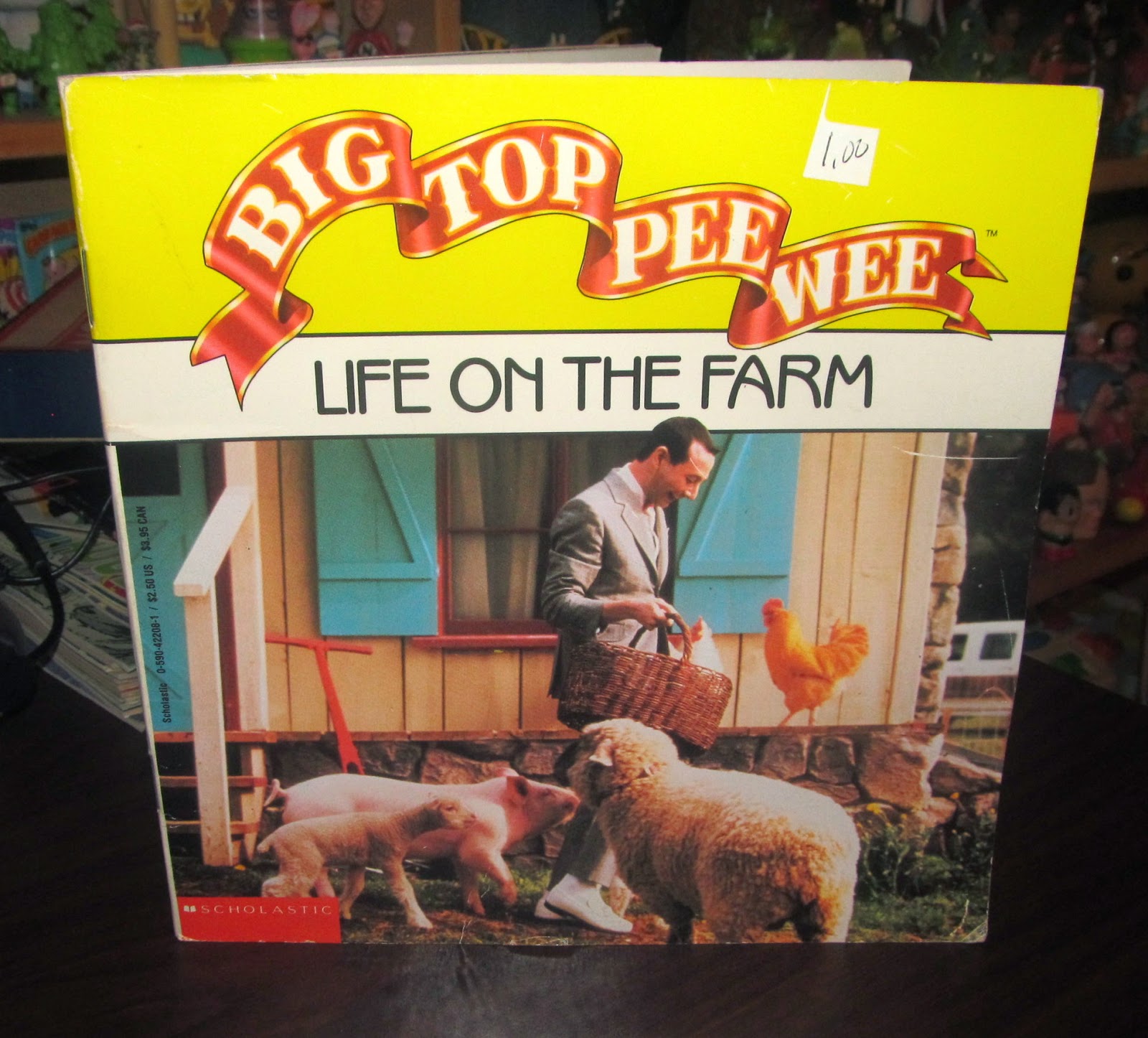 The other item I brought home from Nice Twice was Big Top Pee-Wee: Life on the Farm which is a children's adaptation of the 1988 film. I don't remember loving this movie as much as Pee-Wee's Big Adventure... but I was pretty crazy for anything Pee-Wee Herman appeared in back in those days. I haven't seen the film probably since I was 10 or so, so I can't really comment on the quality. But hey. a Pee-Wee book for a buck? Yep. 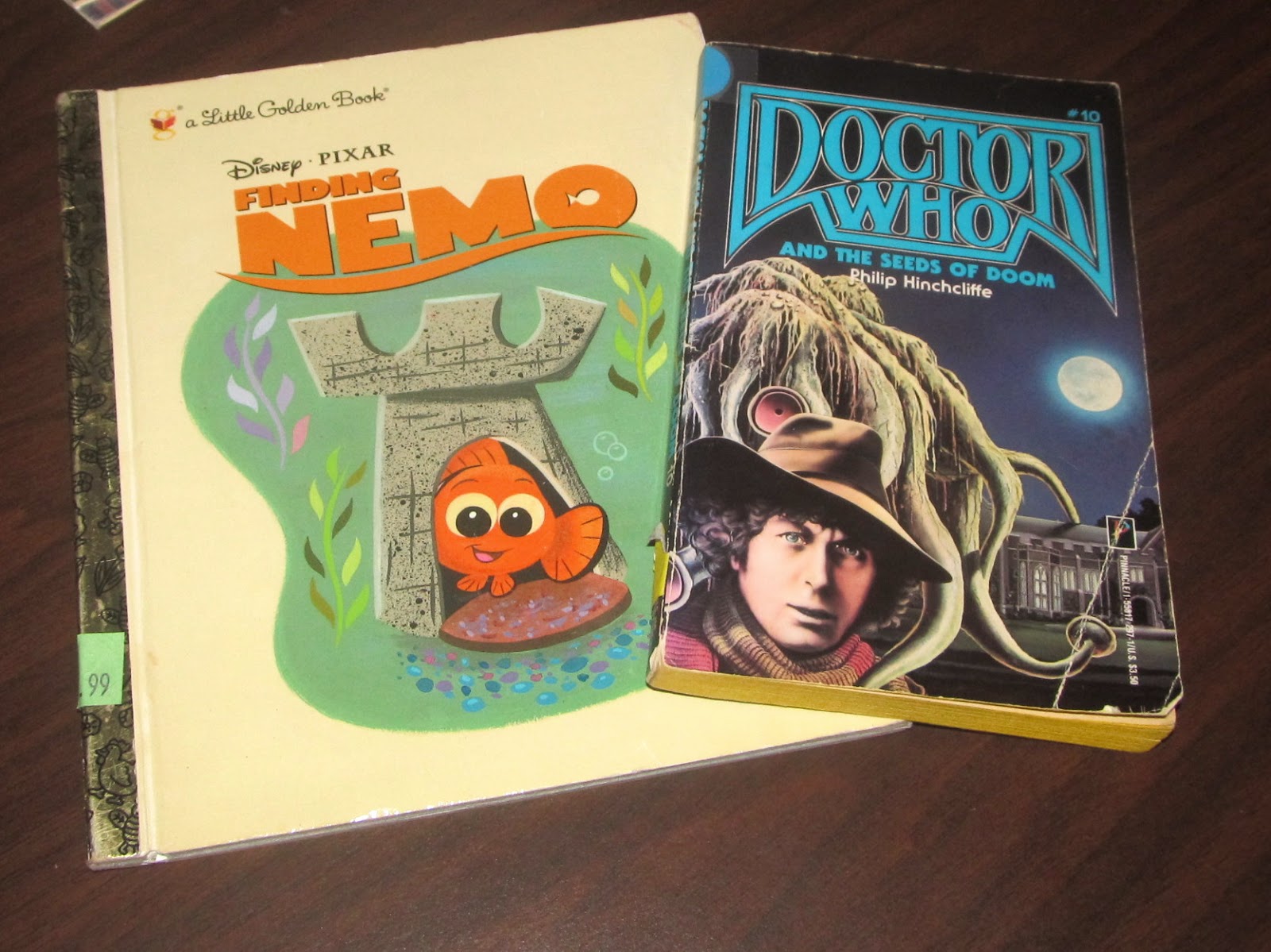 All I found at the Brewer Goodwill were these two books. I've picked up a Finding Nemo LGB in the past only to get it home and find it ripped up beyond readability on the inside. So I found this replacement. And a vintage Dr. Who novel from 1980 (this is a reprint of the original 1977 book) is always welcome on my shelf. Both of these set me back .99 cents. 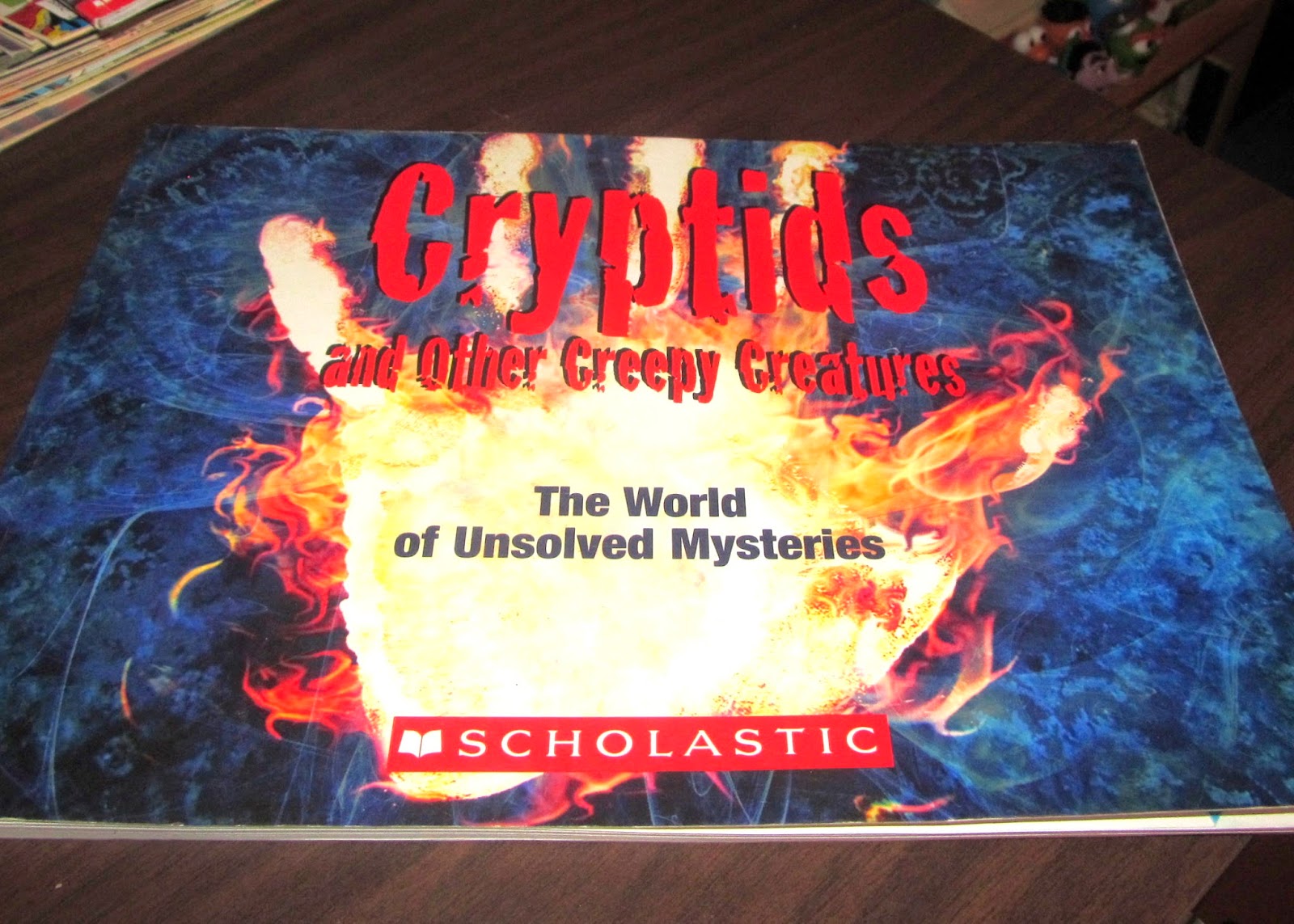 At the Bangor Goodwill, things got a little more interesting. I found this truly bizarre book about Cryptids (And Other Creepy Creatures). And when I say bizarre, I don't mean because of the subject matter, necessarily, I mean the art and production values for this thing actually had me scratching my head. Here's a shot of a page from the interior: "The Hookerman's Light" (And yes I picked this particular one because "Hookerman" made me laugh).

Look at these folks. Could they BE any more NOT terrified of that disembodied hand and lantern? 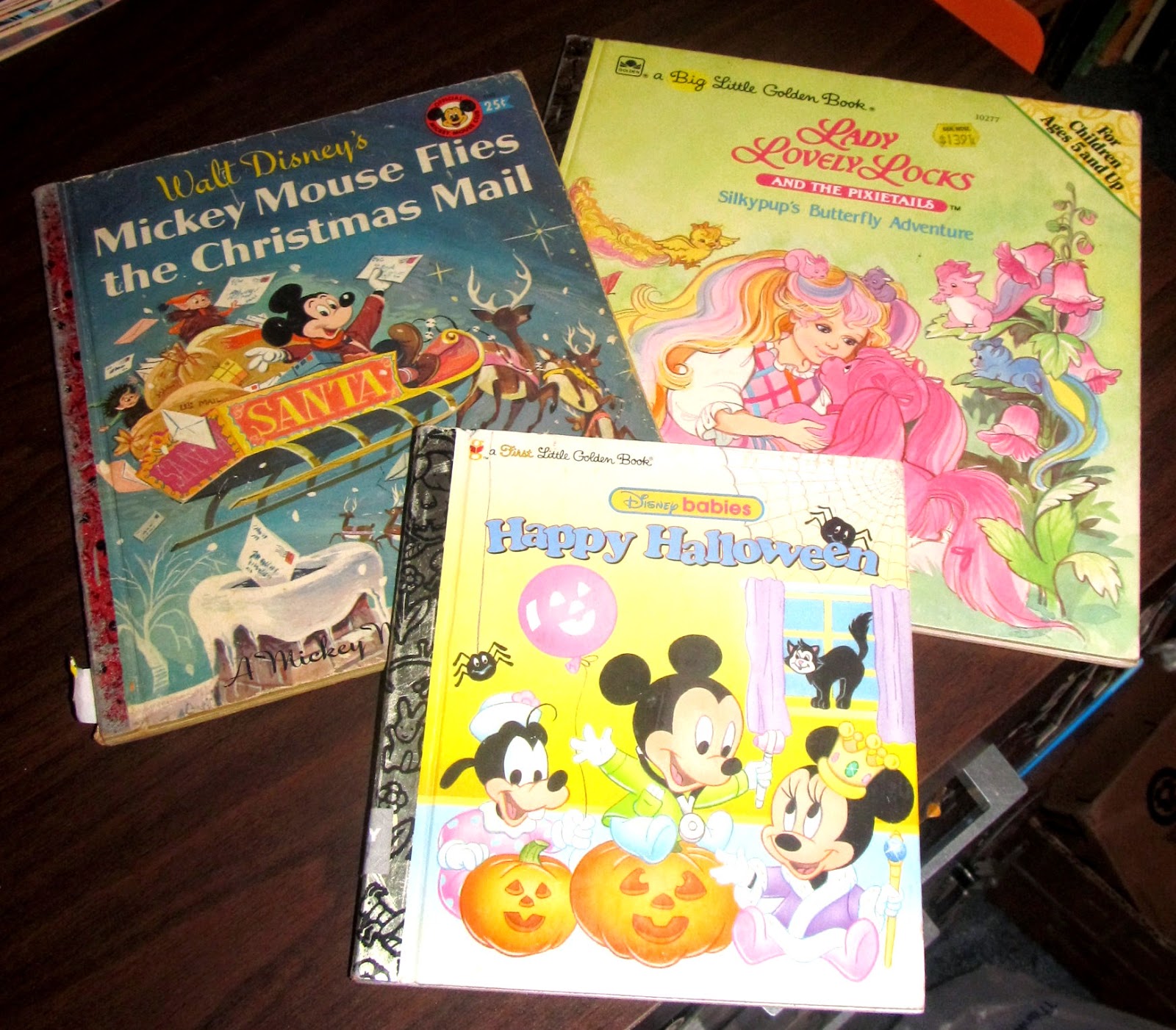 Found some pretty great Little Golden Book finds here, with a Disney book (Not LGB brand) Mickey Mouse Flies the Christmas Mail. A "Big Little Golden Book" of Lady Lovely Locks and the Pixietails: Silkypup's Butterfly Adventure. And a "First Little Golden Book" of Disney Babies: Happy Halloween. These are all AWESOME additions to my LGB collection! This lot has it all: three different sizes of books, Disney licensing, baby versions of characters, a semi-obscure 80's property, one "off brand" LGB, and holiday themes! 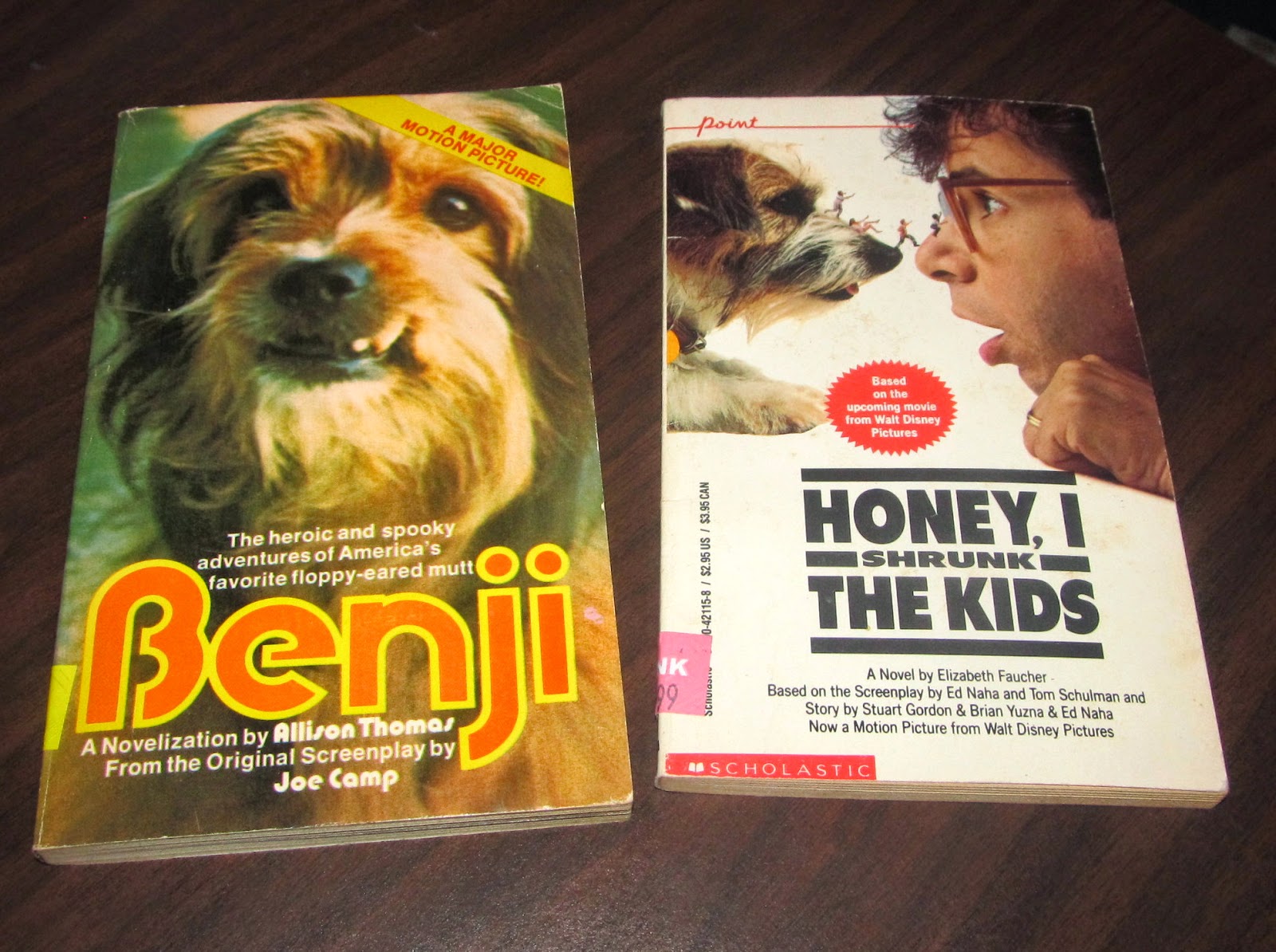 I may have mentioned before that I've started snapping up novelizations of movies like a madman. So picking up these adaptations of Benji and Honey I Shrunk the Kids were perfect for me! One of these is a kids book based on one of the most reviled super-hero films of all time. The other is a nonsensical story about giant robots draining oil supplies from the planet in order to pull all of the continents on Earth into one big Pangea. I had to own them both. HAD TO.

Next up I found a grab bag for .99 cents that contained these five finger puppets/cake toppers/whatever-the-heck-they're-supposed to be. Almost all of them have seen better days. I already have a couple of the Bert and Ernie ones, but THESE ones have rooted (albeit melted) hair on top. Oscar and Cookie have sustained some fairly serious eye damage, leaving Grover seemingly the only one relatively unscathed by time. Let me make something RIDICULOUSLY clear: I LOVE THESE THINGS. Nothing shouts "Retro Sesame Street" to me as much as these things. I am SO happy to own them. 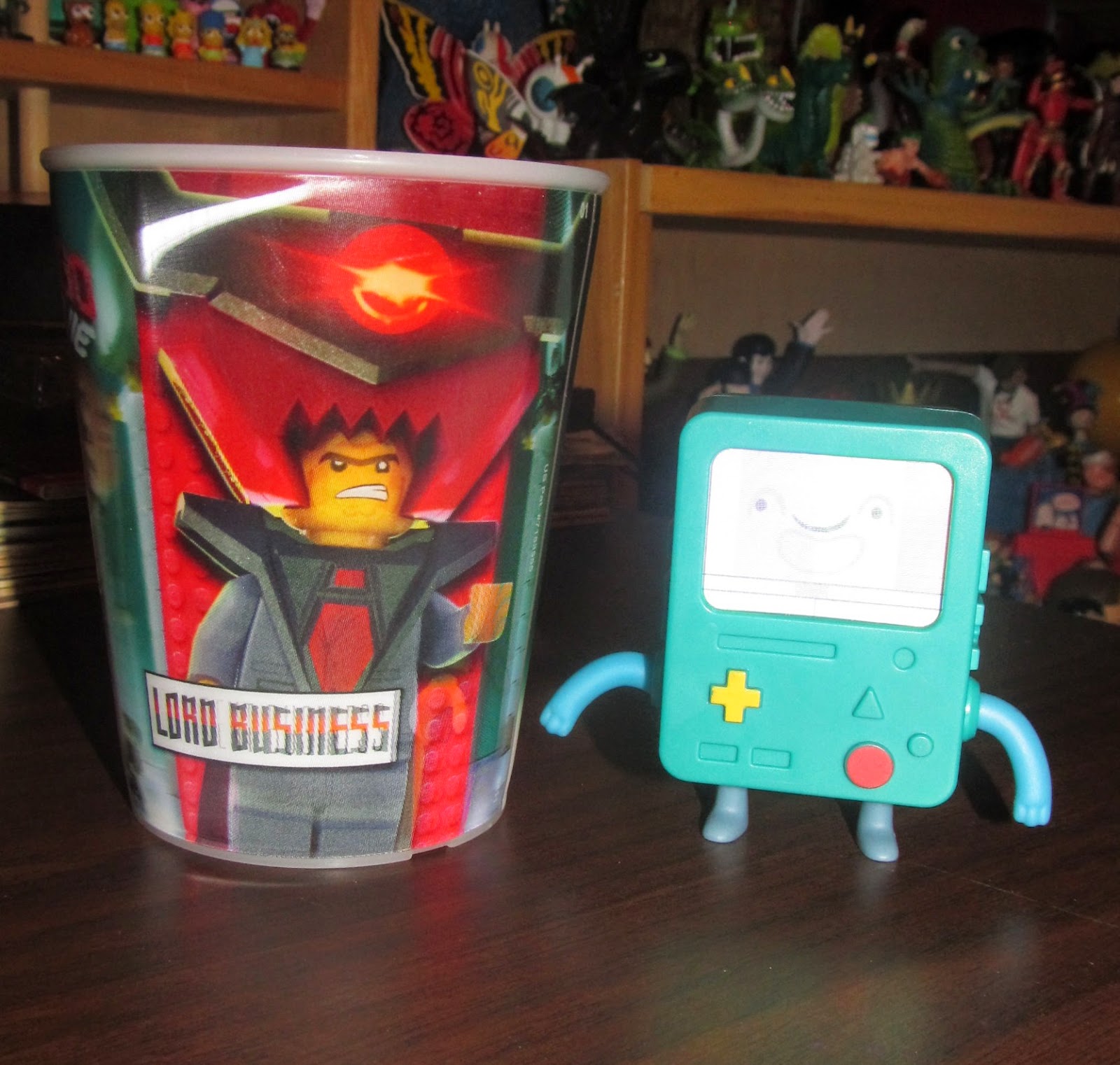 I also found a Grab-Bag with these two Happy Meal items in it! A Lord Business cup from the LEGO movie (which I admittedly already own, but didn't realize when I picked this one up) and a BMO from the recent Adventure Time promotion! 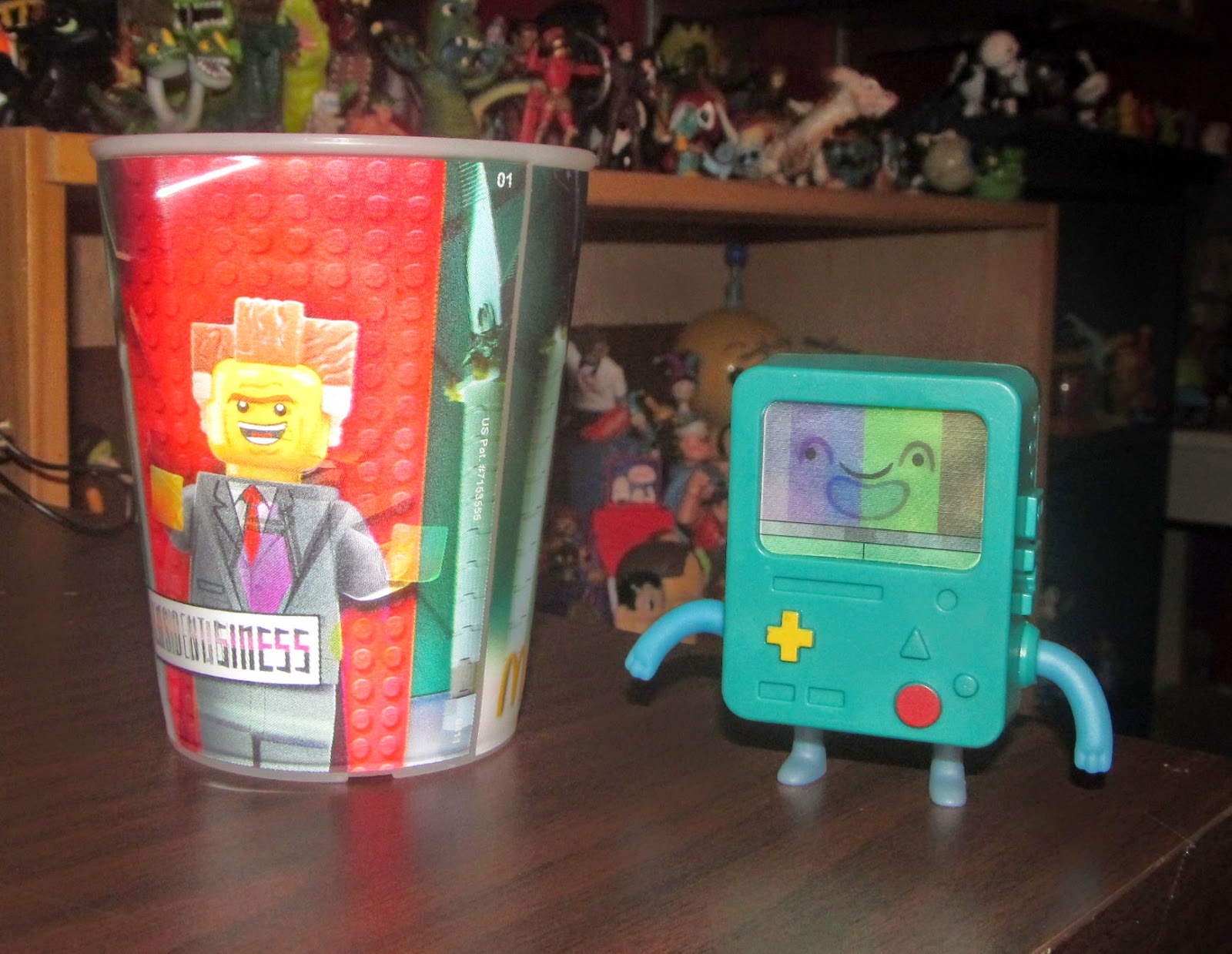 Both of these toys are lenticular, and therefore a complete PAIN to photograph... but I manage. I am now very close to owning the entire Adventure Time set of toys... and still have a few more LEGO cups to track down before I'm done there. 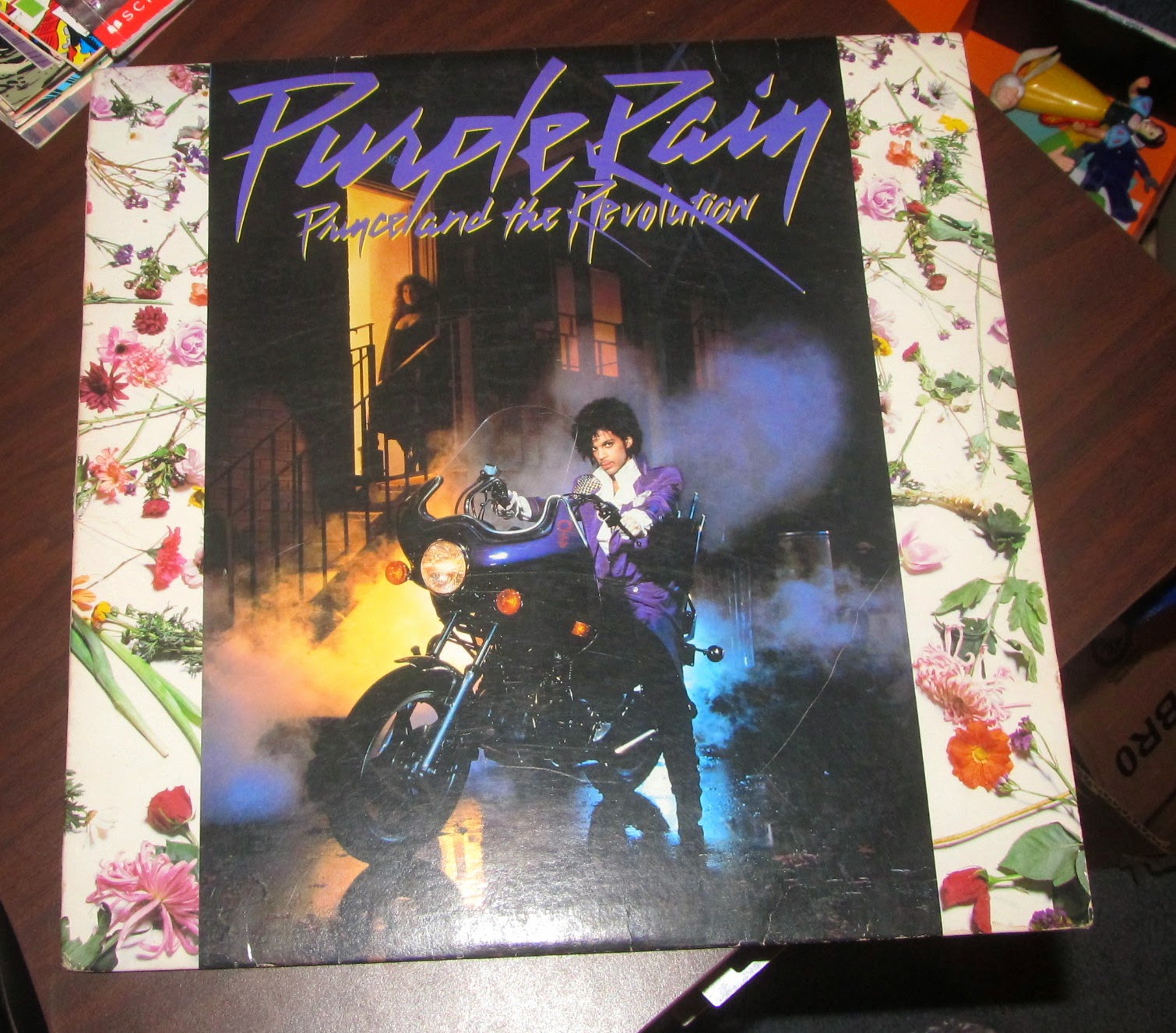 And my final find was this BEAUTIFUL THING: a Prince and the Revolution's "Purple Rain" record! It's in great shape... and my instincts tell me it's probably NOT from the original release... but I don't care. I now feel like I own a piece of HISTORY. If you don't know already I am a Prince FANATIC. love Love LOVE him! And this is my absolute favorite Album from him and the Revolution. This is going on THE WALL OF MY CAVE.

Well. There. That's all I've got for tonight kids! I'll be back soon with more Geeky Goodwill Goodies soon enough! Until then, Happy Hunting!
Posted by Derek Ash at 10:26 AM