So it wasn't a payday Friday, but I felt the need to swing into Goodwill since I was driving home from work anyway. I try to make these "quick stops" very abbreviated trips into Goodwill, with a quick sweep past the toy department, a sweep past the glassed-in case, a quick look down a couple of the other hardgood aisles, and then a very brief GLANCE at the books section (as opposed to the in-depth COMB I do on payday Friday of ALL those departments). I don't expect to find much, but I still usually find one or two things to cart off home. Well this quick stop was of a different breed altogether. My quick GLANCE at the book section went a little more in depth as I continued to find interesting titles that I just couldn't leave behind. It wasn't ALL books though (scroll down to the bottom for a toy and a board game I found if books aren't our thing). Here's the stuff I found: 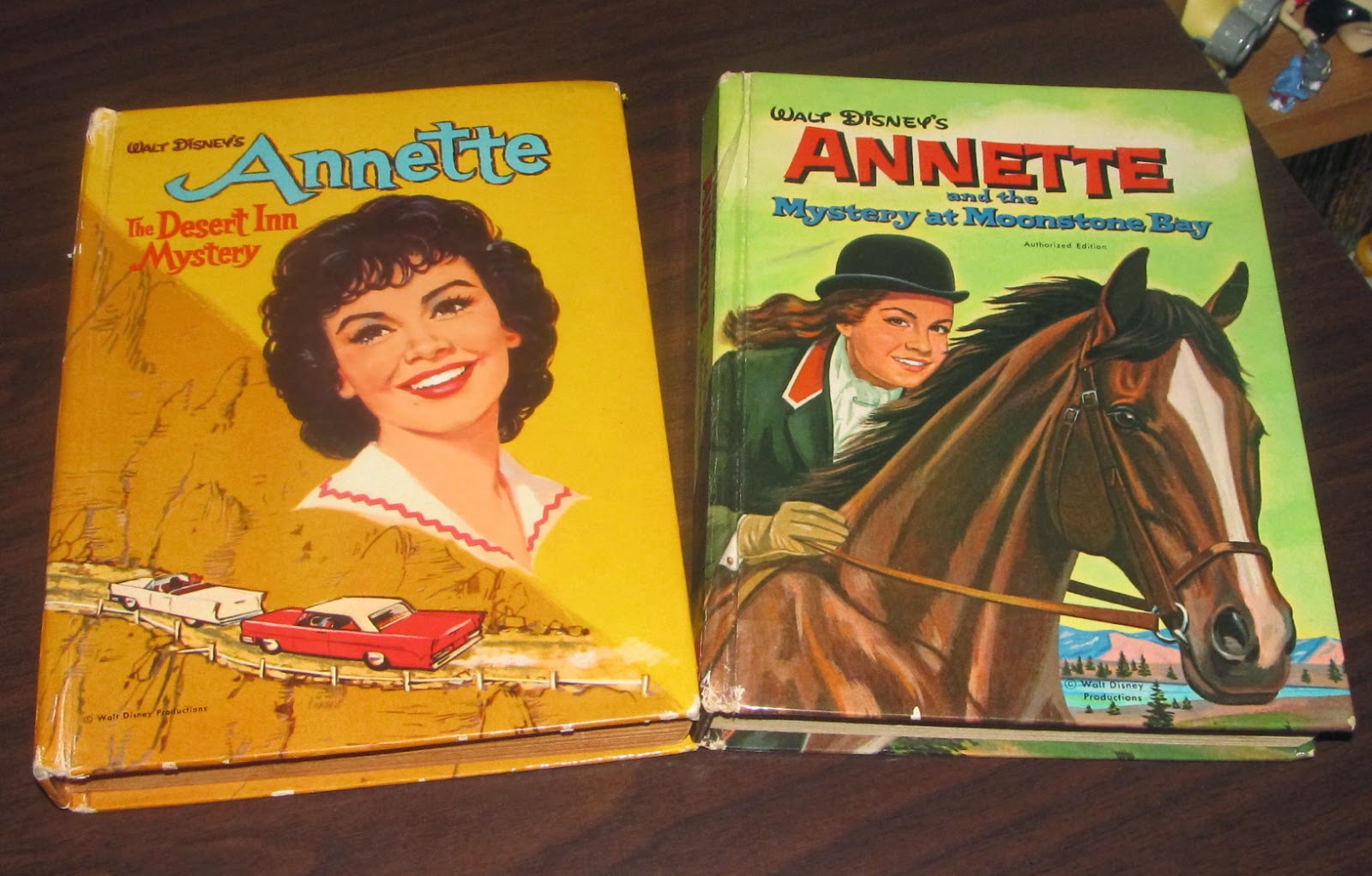 Disney put out a series of Nancy Drew-style mystery novels in the early 1960's featuring their very own Maiden-fair Mouseketeer, Annette Funicello. These just jumped out at me. I am not a fan of old mystery series from that era, but slap a little Disney on it, and make the adventures star a real-life "It girl" from back then? And it spells out "G-O-T-T-A H-A-V-E I-T!!!" These cost me a cool 1.99 apiece, and I have no idea yet what I'm going to do with them... But oddly enough I think I may actually read them!!! 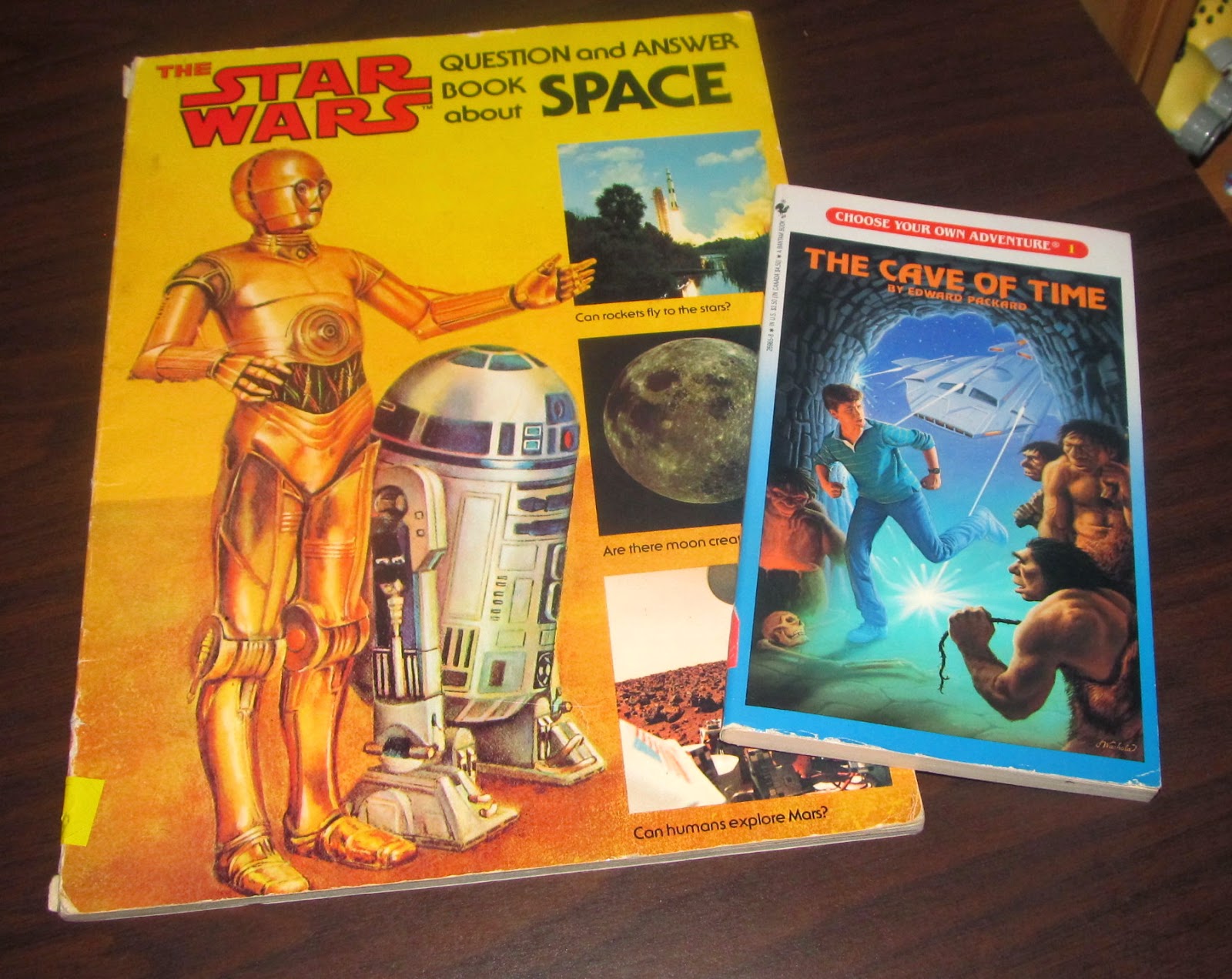 These are both duplicates of books I've already brought home before... but I couldn't leave them behind. I've started doing this because I've learned that having fodder to add to either trades or even just gift packages is a nice thing. These will be moving on to new homes sooner rather than later. 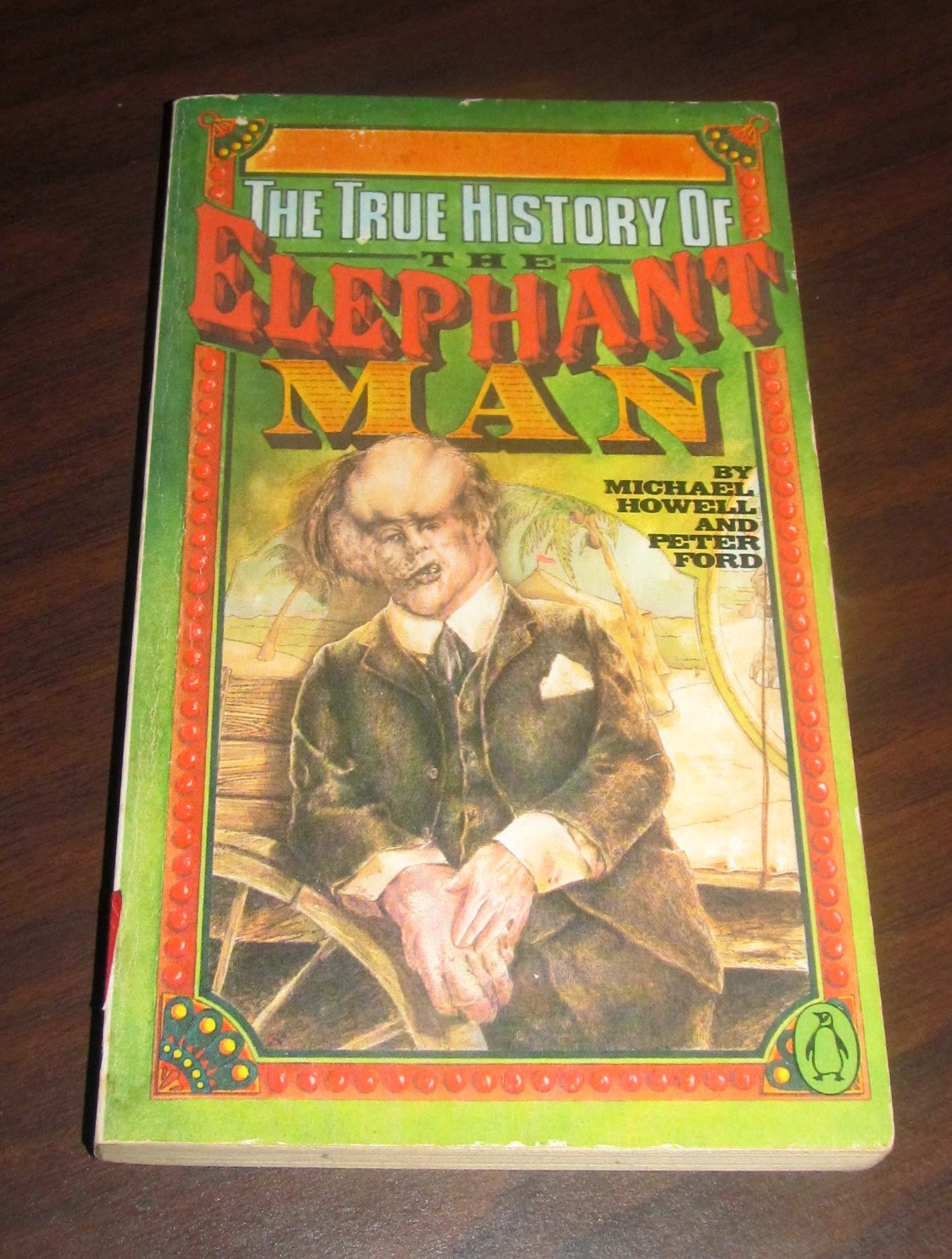 This one almost didn't come home with me, but I've gotten into the dangerous habit of buying books for their covers... and admittedly the story of Joseph Merrick is one that I kind of want to know more about. Look at that cover! The color! The artwork! It looks amazing and it batted its eyelashes until it convinced me to take it home. .99 cents. 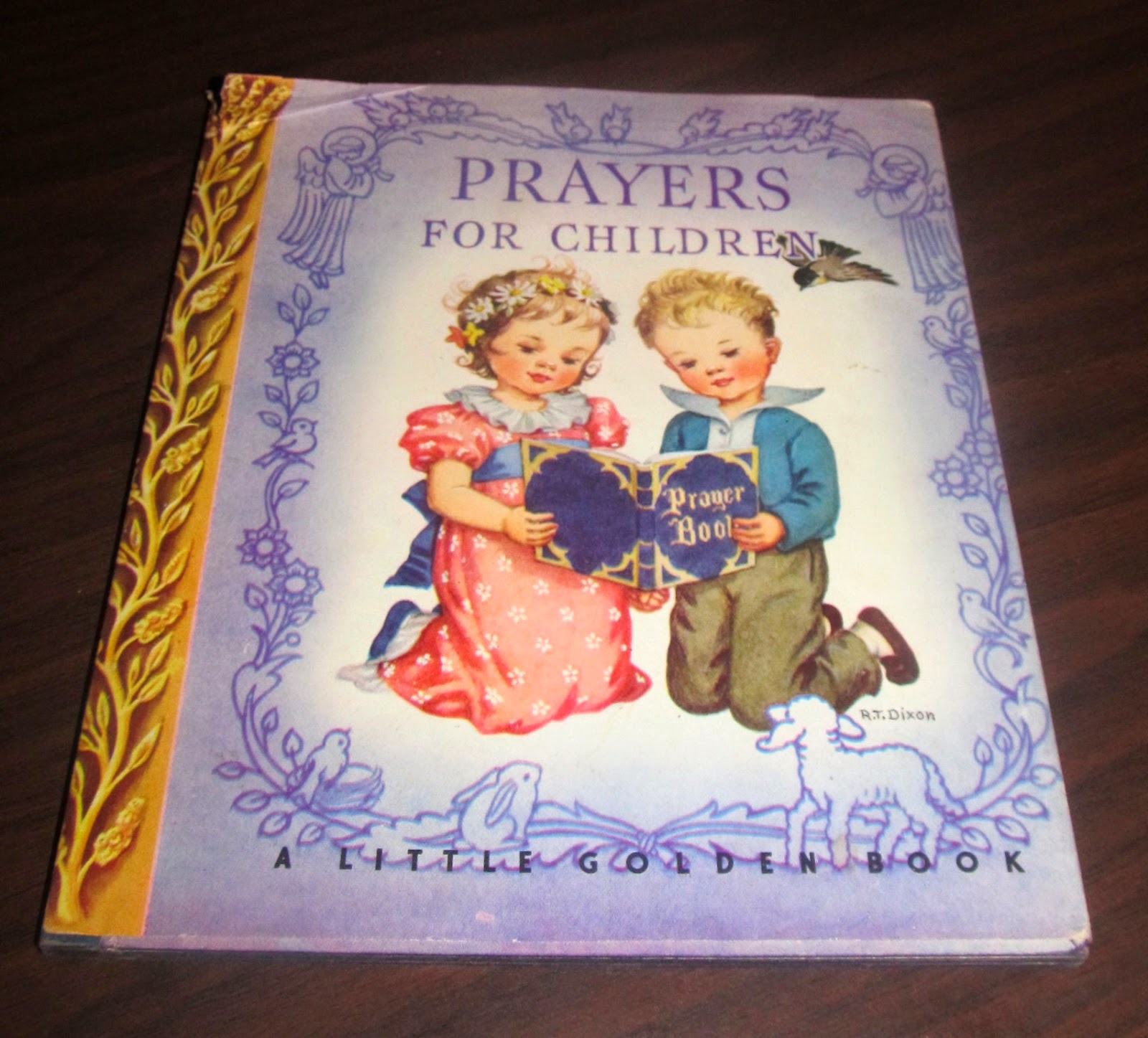 I always feel the need to point out that I am not a religious person when I showcase items like this one. Apologies to my religious friends, of whom I have more than a few (and whom I am sure roll their eyes every time I feel the need to clarify this)... but I want it all out there, upfront and honest, so people don't get the wrong idea. This is a book of prayers for children, yes, but to me it is first and foremost a Little Golden Book from 1945, with a dust jacket. A DUST JACKET PEOPLE. It's actually the seventh printing of the book, as the original was from 1942. This is now officially the oldest LGB in my collection. 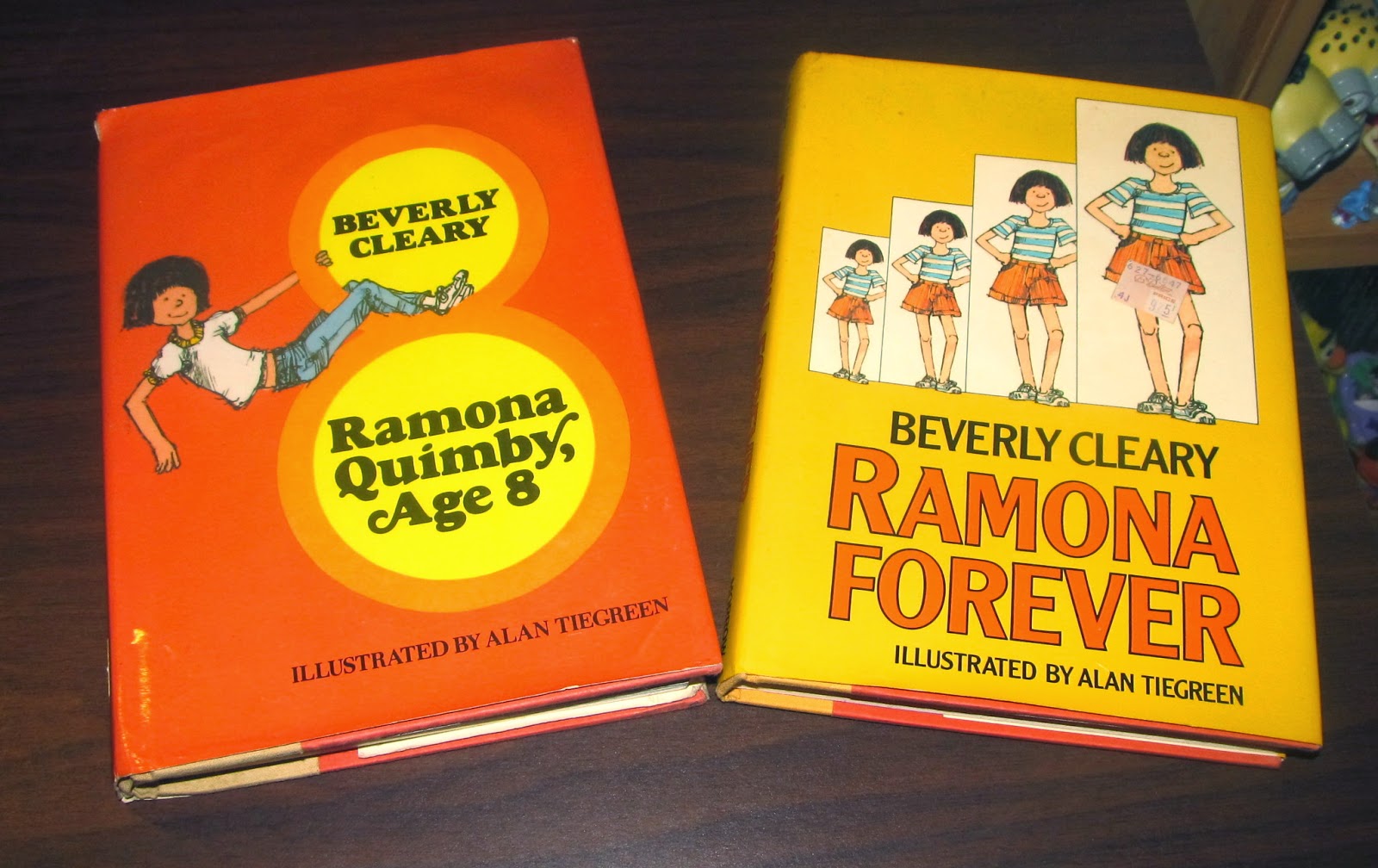 I picked up these two Ramona books for my wife actually, as she wants to start reading them to my son. I looooove me some Beverly Cleary, y'all. I have a few other books kicking around, but... confession time folks... I HATE IT when I have several books from the same series and they were all published at different times so THEY DON'T MATCH. So I will be keeping my eyes peeled for the other 4 or so Ramona books in this style (And yes, I know the Henry Huggins, Ribsy, and Beezus books all share the same world, but I'm not counting those). 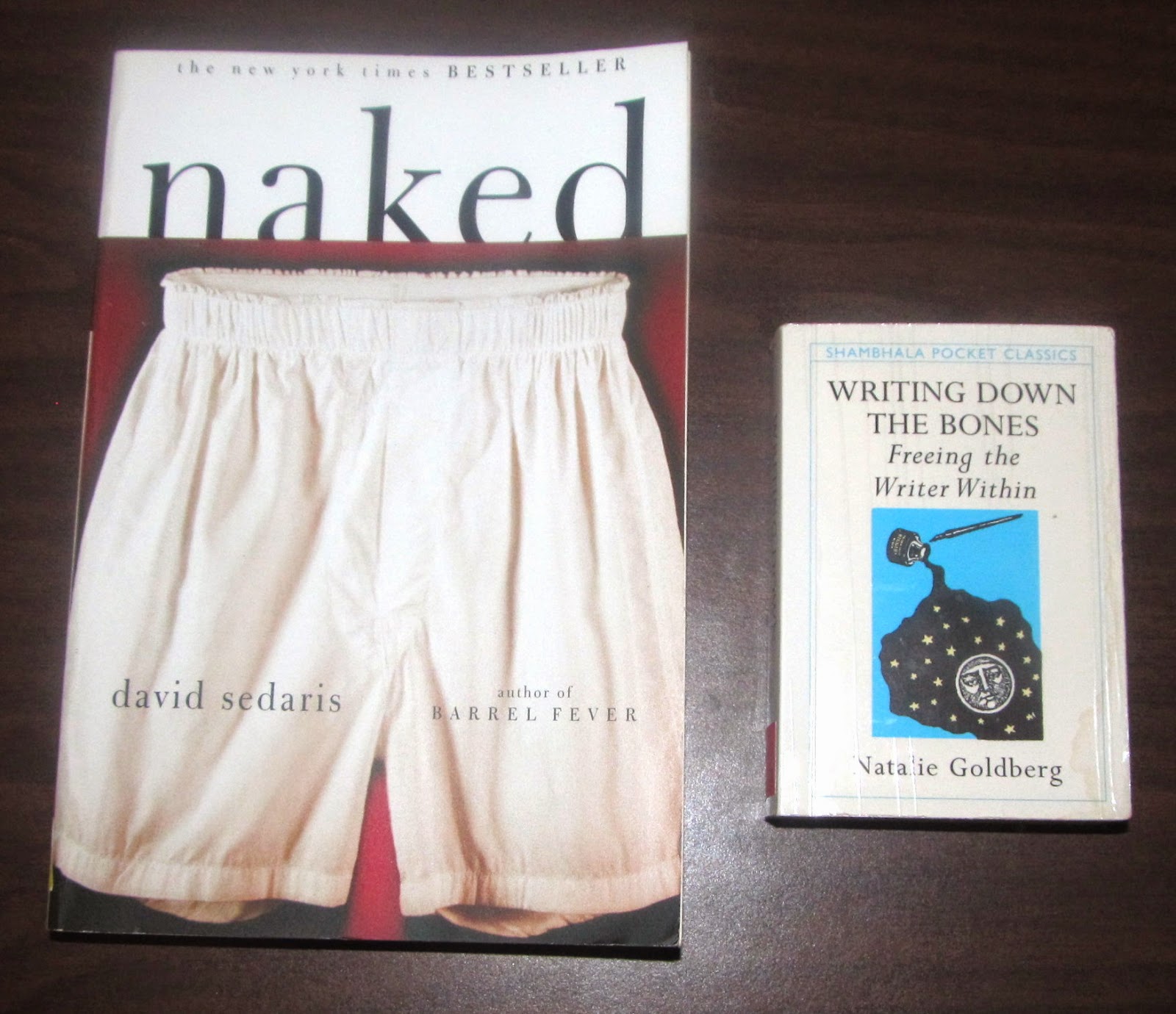 A couple of quick ones here, a book by David Sedaris I haven't read yet, Naked (.99 cents) and a teeny-tiny copy of Natalie Goldberg's Writing Down the Bones (also .99 cents). If you have never read either of these authors, you should correct this oversight AT ONCE. Nothing too terribly geeky going on here honestly, just really great writing. 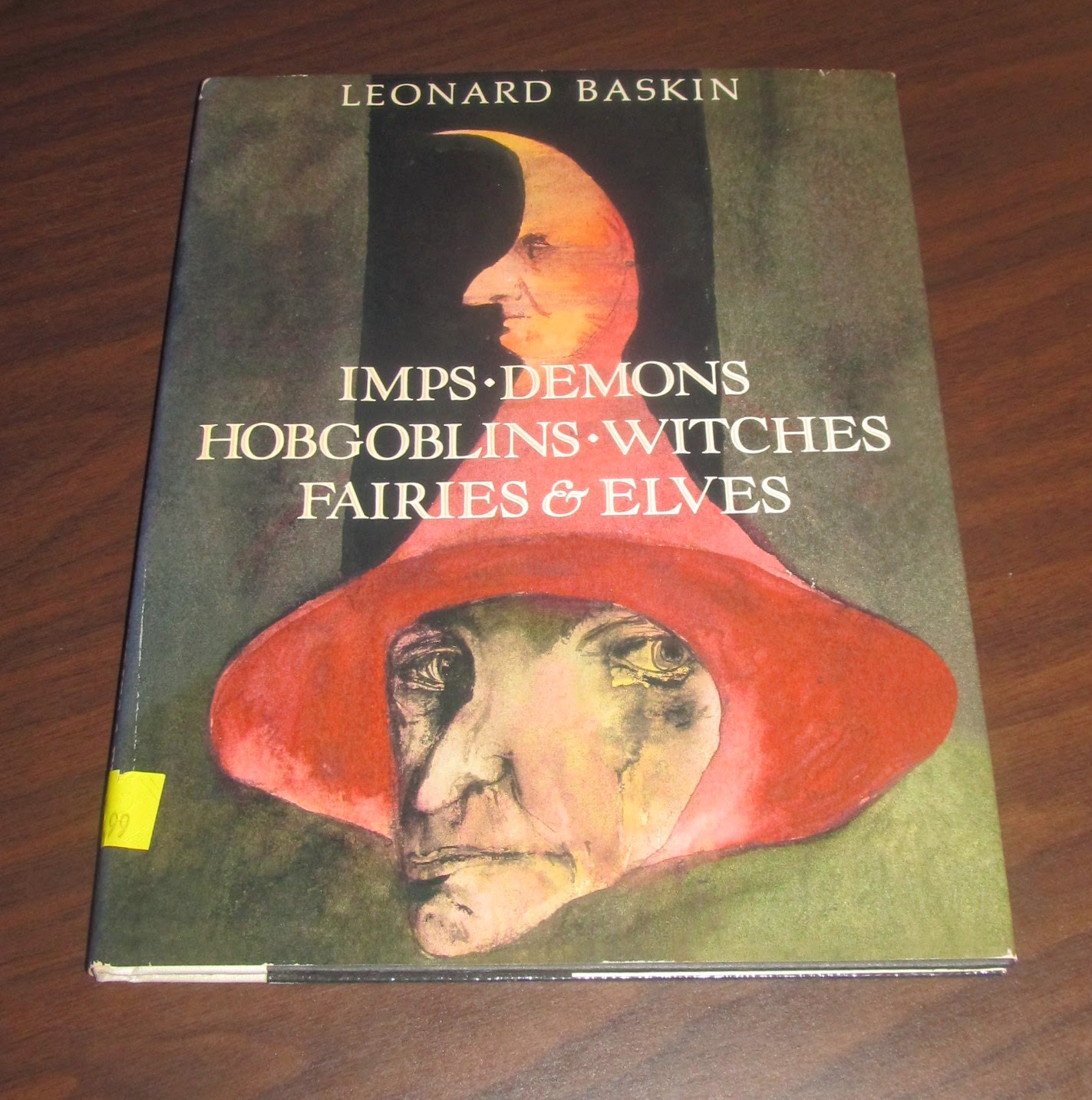 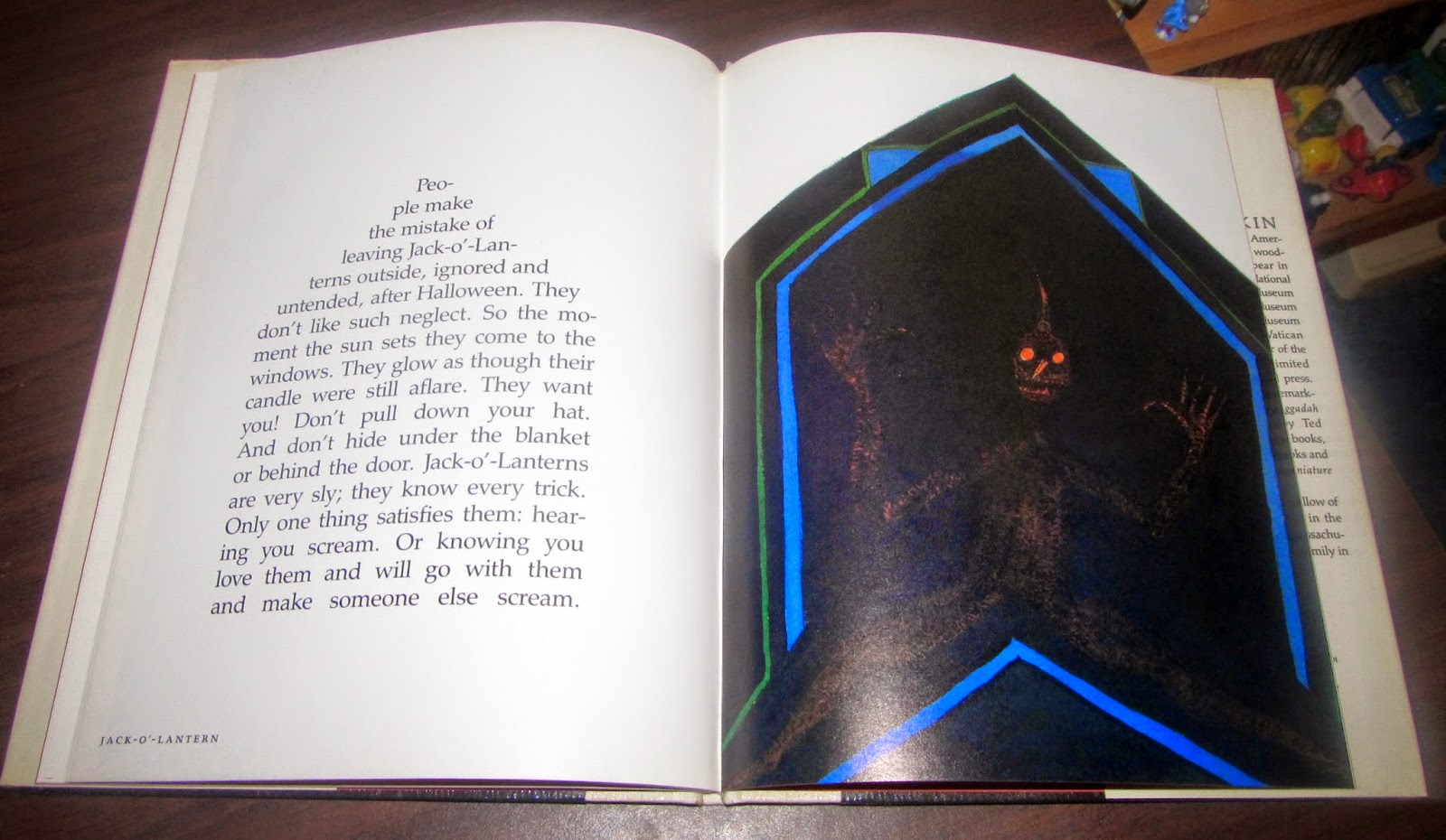 Next up is this bizarro book with the uneccarrily long-named Imps Demons Hobgoblins Witches Fairies and Elves. I know I have encountered this book in the past, but I couldn't tell you when or how. I almost didn't end up bringing this one home either... but it is so genuinely weird that I couldn't leave it behind. Leonard Baskin dedicated his book to pieces of (what I have to write in quotes) "art" and snippets of prose poetry (I guess?) about each creature it details. I would say that the Tooth Fairy piece is especially disturbing in a weird way. I picked that one for its corpulence and body horror aspects, and the pieces on Jack o' Lanterns and Bloody Bones because I have a certain affection for those types of characters. 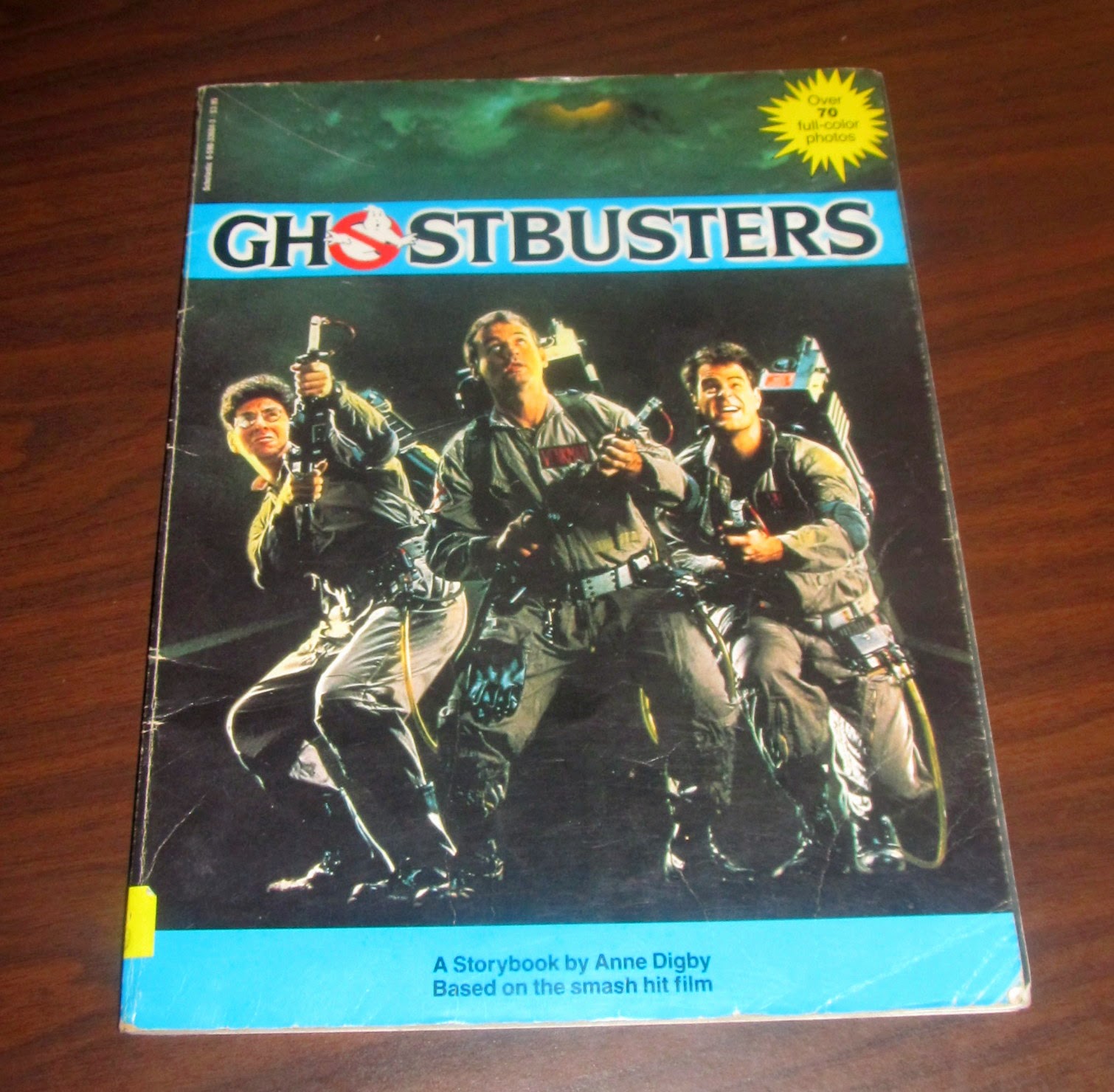 This is one of my absolute favorite finds. A Ghostbusters storybook! A big one! By all that is good in this world, I LOVE FINDING THIS STUFF AT GOODWILL!!! I included shots of some of my favorite scenes from the film as the are pictured in the book. 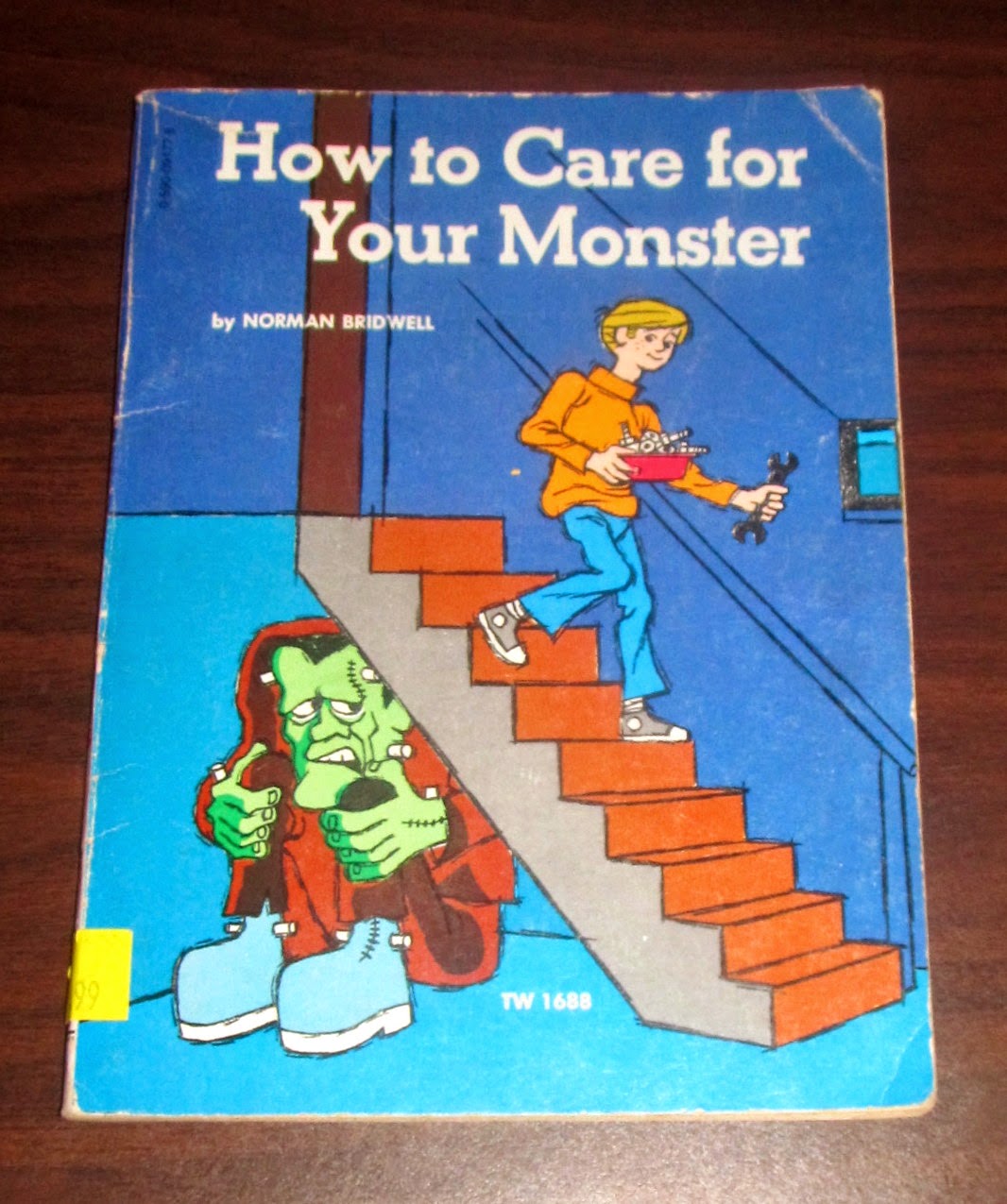 Norman Bridwell, of "Clifford the Big Red Dog" fame wrote and illustrated this little gem, which is exactly what is sounds like... a manual detailing the caretaking of various different kinds of monsters one might own as pets. These include such beasties as vampires and Frankenstein's monsters, among others. Plan on seeing more of this book during my Halloween countdown in October. 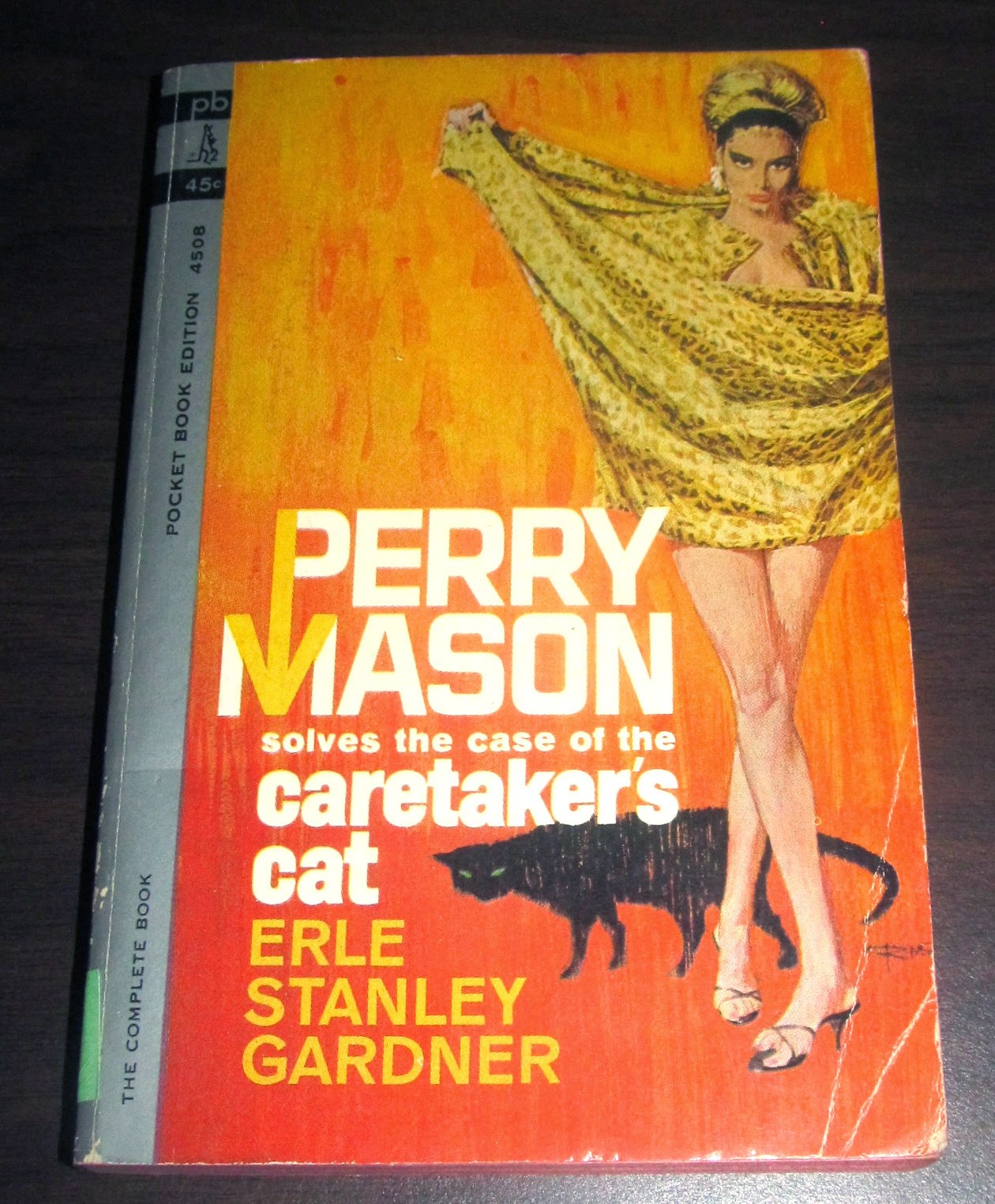 I mentioned above that I am developing a dangerous habit of buying books simply for their covers. This is a prime example of this developing trend. Perry Mason Solves the Case of the Caretaker's Cat which I bought solely for the cover art by Robert McGinnis. This would be the second time I have bought a Perry Mason novel simply because the cover delighted me. Look at that image above. Look at the woman's face. Look at the... whatever that thing is she's wearing. Look at the cat behind her. I mean even the way she's holding her TOES is cool... it's just an awesome piece of art and I want to find a way to display this thing to make ALL my friends insane with envy. 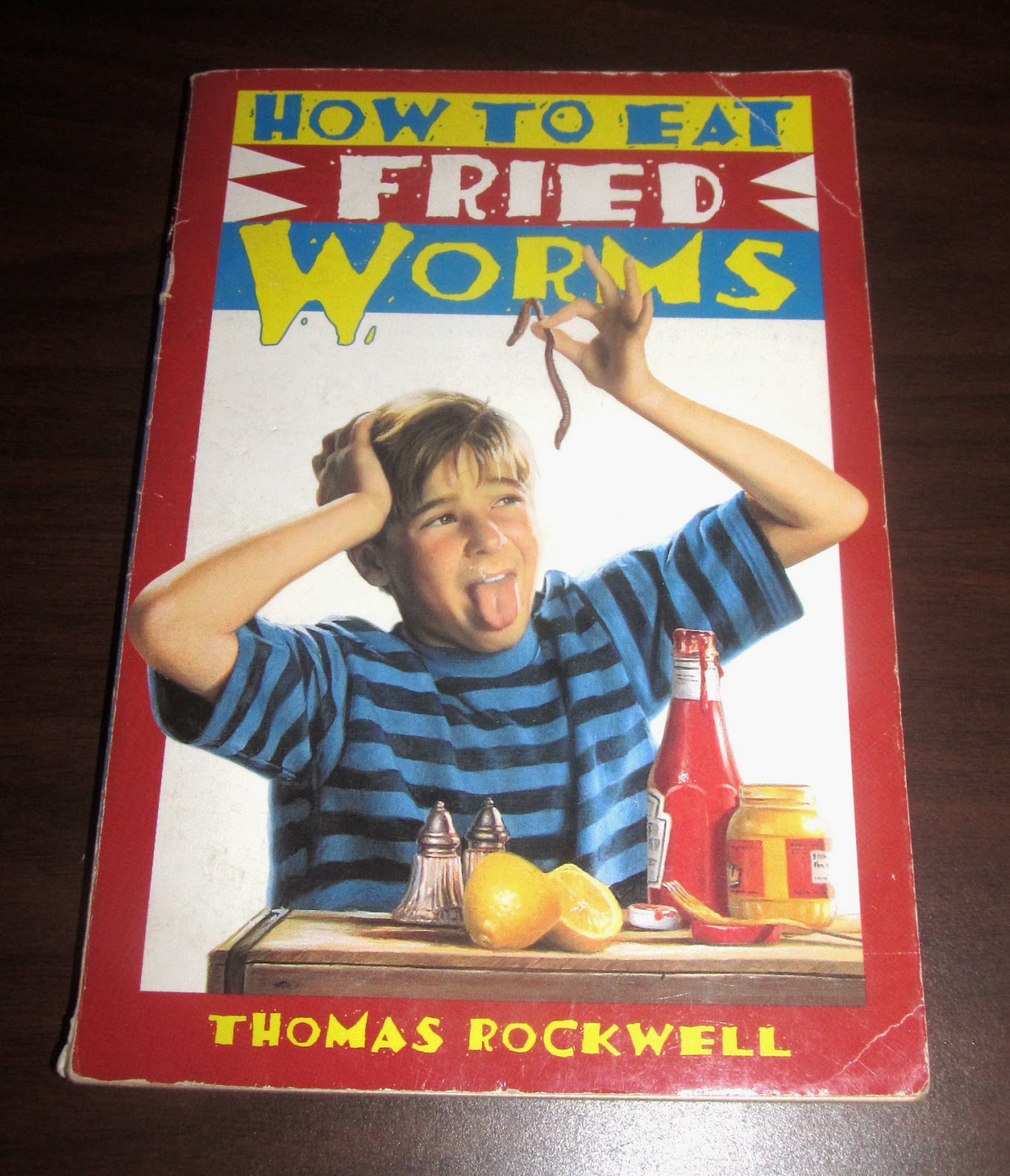 Again with the classic kid's literature for my boys. Really enjoyed this book as a kid, and I keep seeing books like this and The Chocolate Touch and Superfudge at Goodwill, so I'm going to start snapping them up. 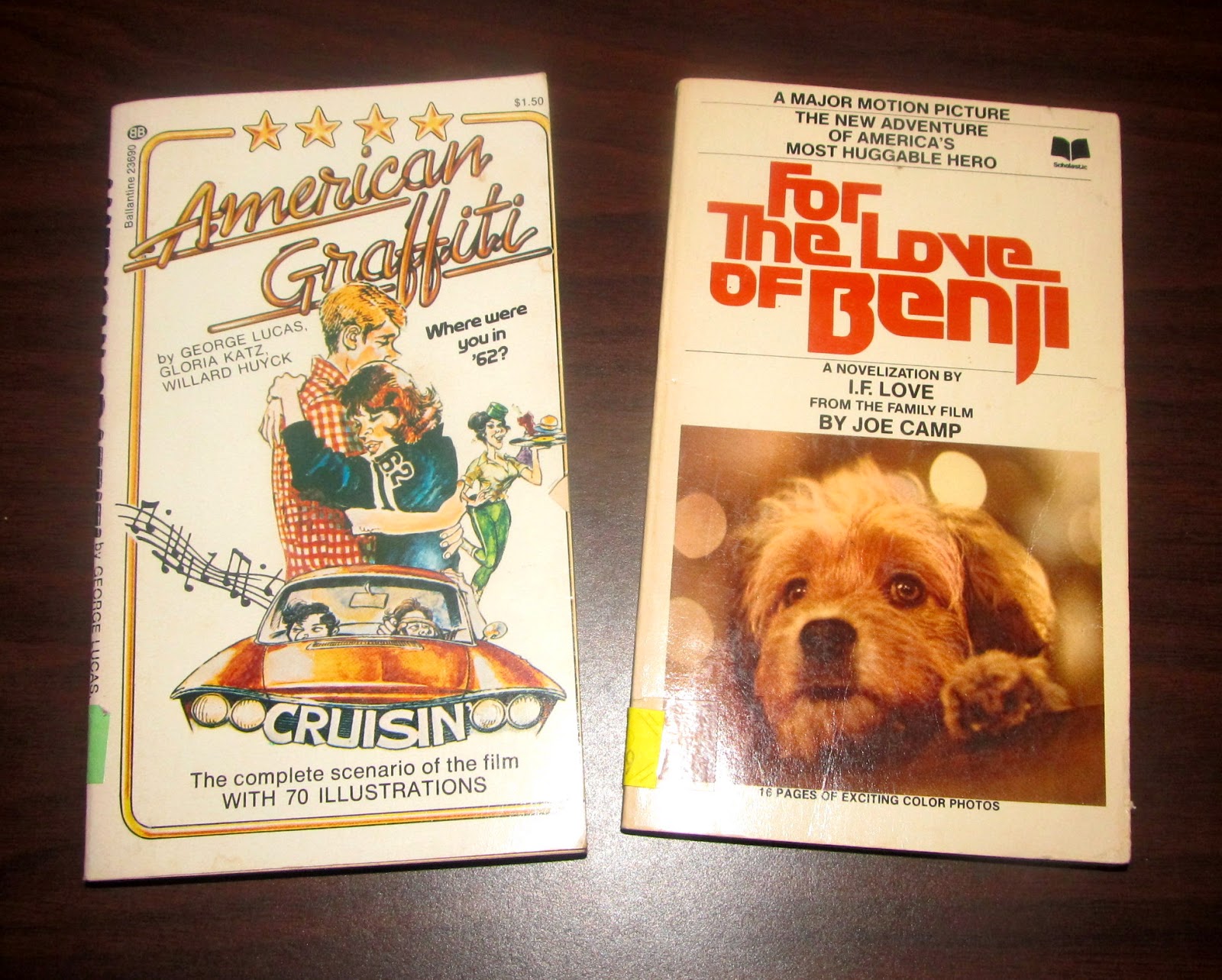 A couple of the movie adaptations I found on this trip: American Graffiti and For the Love of Benji. I have never seen either of these films... but lately I have been going bonkers picking books like these up. 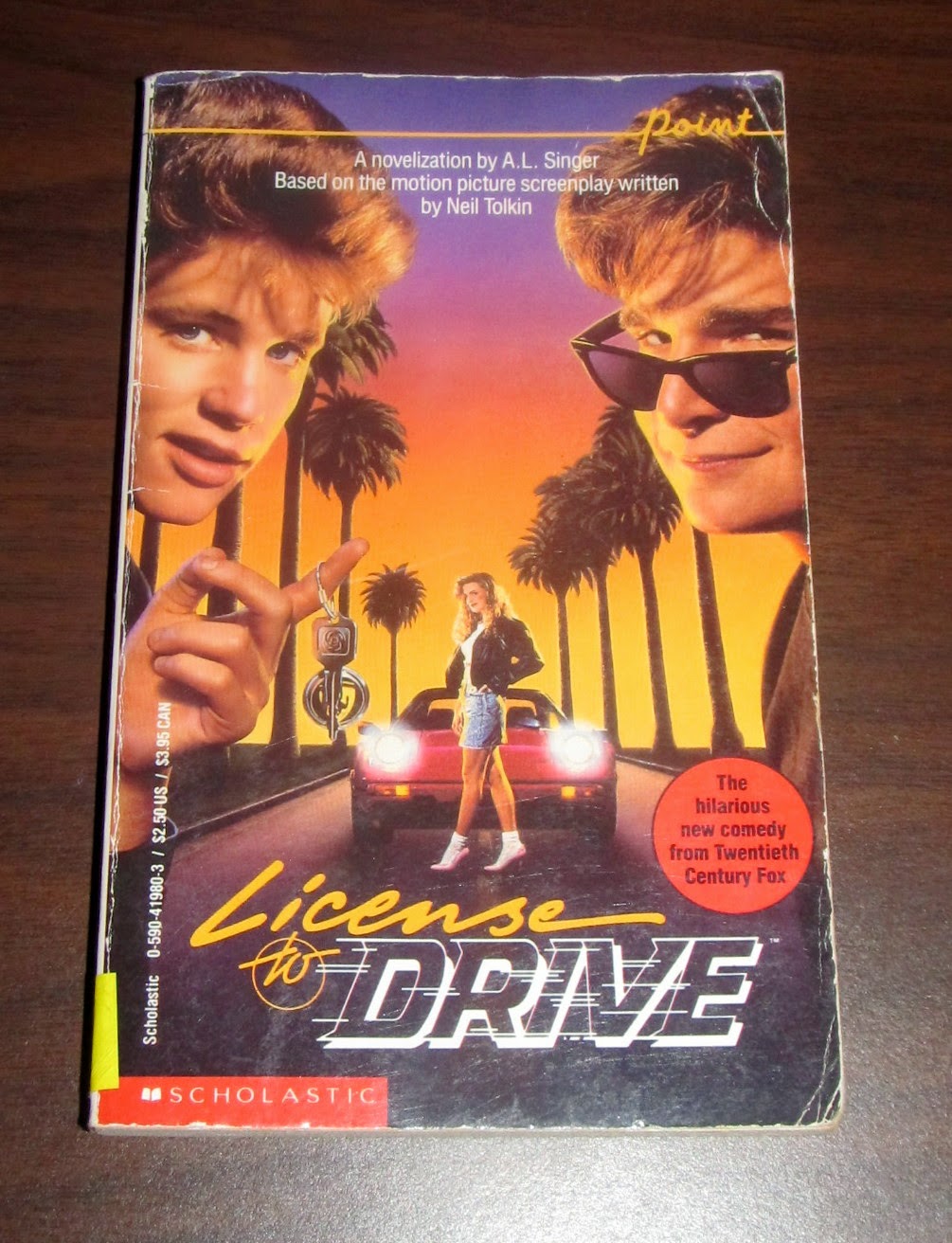 Aaaaand speaking of... I found THIS little gem! I think this is also another of the most exciting finds of this particular trip to Goodwill. My friend Brian over at Pop Pop! It's Trash Culture has spoken openly about his love for the two Coreys on the recent episode 79 of the Geek Fallout Podcast, focusing on pop-culture duos. It was shortly after hearing this podcast that I made this trip to Goodwill and found this book. I sort of feel bad keeping this for myself as I WANT to be the sort of person that would hand over a novelization of License to Drive to a friend who clearly loves the source material... but I WANT IT FOR MYSELF. I'm sorry Brian. I'm just so sorry. 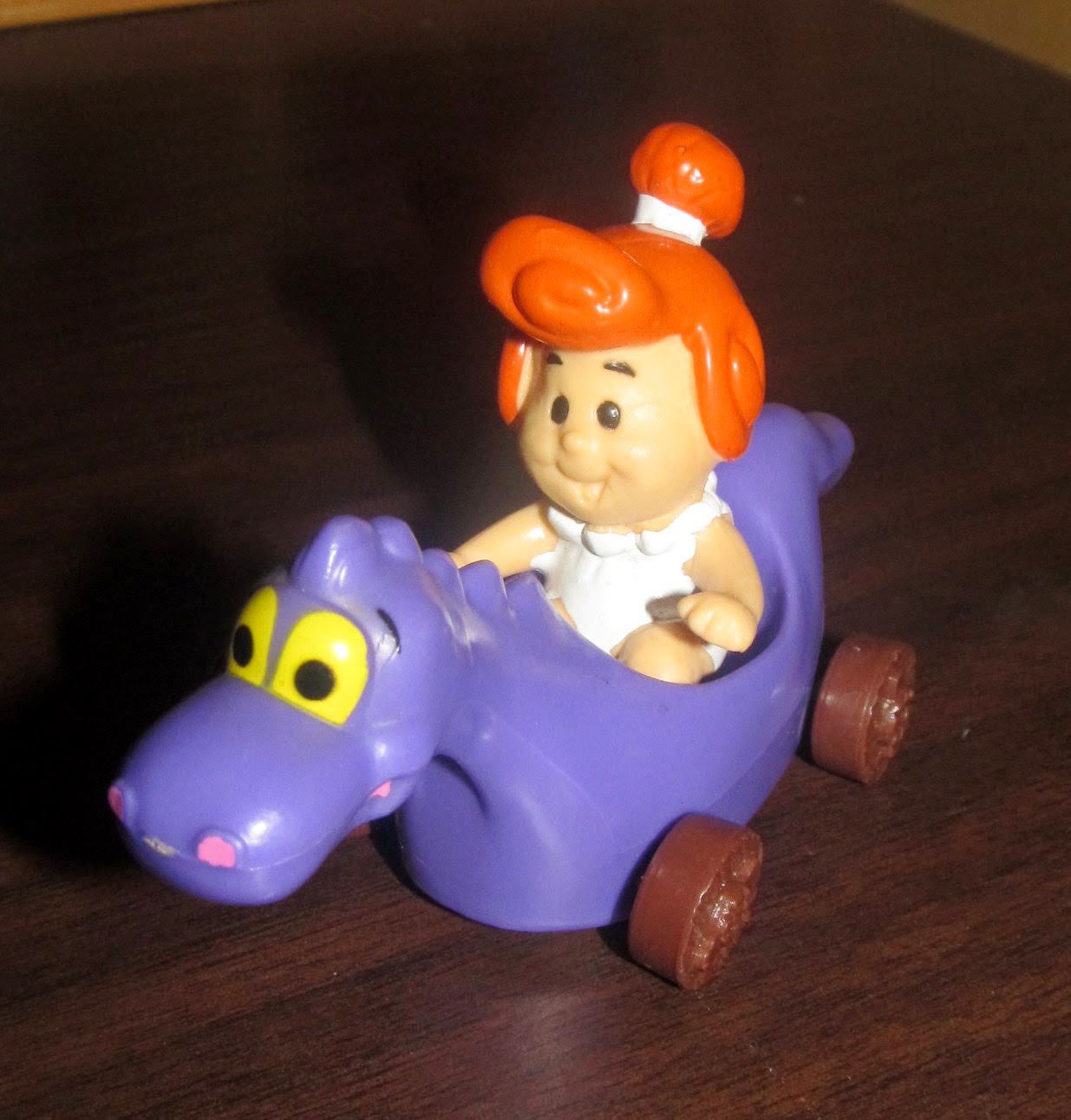 Finally moving out of the book territory and solidly into "toys" we have this Flintstone Kids Wilma toy from McDonalds, circa 1988. I was never a huge fan of the original Flintstones, but for some reason I DID like the Muppet-Babies version of the show, which starred Fred and the gang as... well... kids. I also distinctly remember owning this toy as a kid too. I was so surprised to find her actually IN her purple dino car there on the shelf that I almost couldn't believe my eyes. I paid .99 cents. 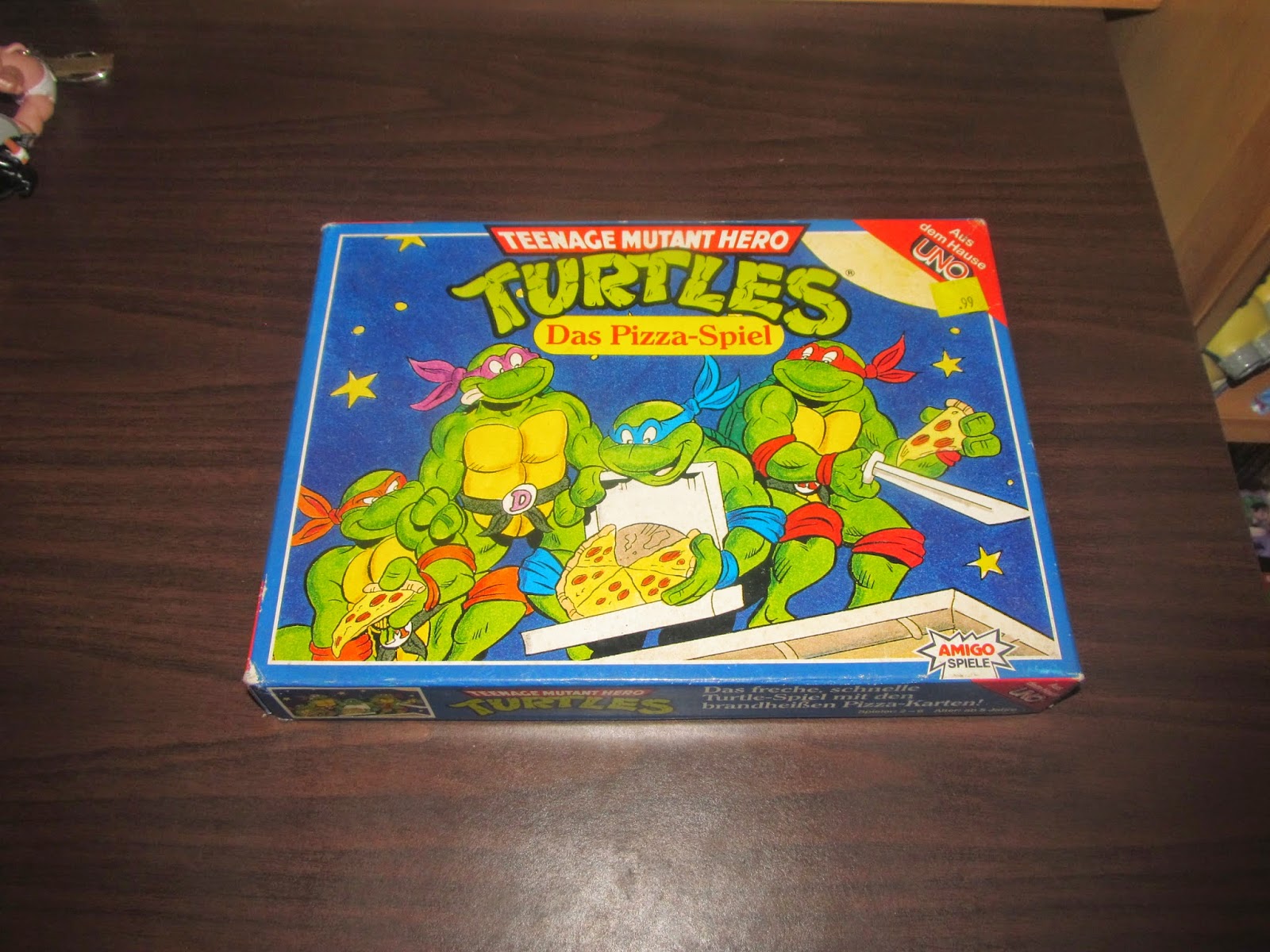 And finally, we have, from 1990: "Teenage Mutant Hero Turtles: Das Pizza-Spiel" A German version of the "Heroes in the Half-Shell" boardgame. I don't care that the thing's in German... in fact, it increases the appeal for me! The fact that I picked this up for only .99 cents had me singing "Go-Ninja-Go-Ninja-GO!!!" 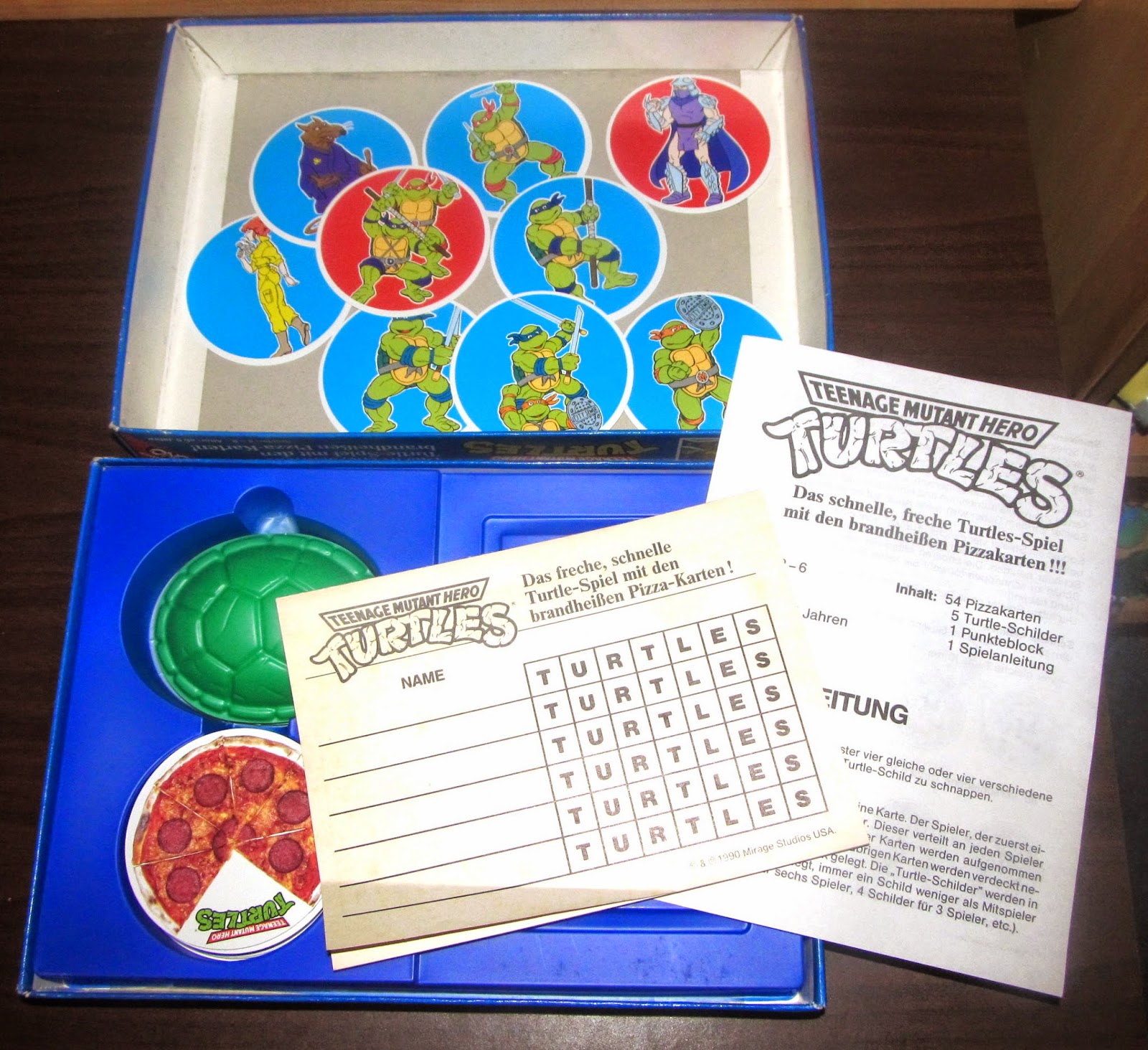 Everything's in there that was supposed to be in there, so I'm pretty happy! In fact, the whole haul made me pretty happy! Lots of cool, weird, interesting things to sort out and figure what to do with. It's what I love about a good trip to any thrift shop!

That's all I've got for tonight kids! I'll be back soon with more geeky Goodwill goodies though, so until then, Happy Hunting!