Some Lazy Shots of Stuff I Own

So I've recently gotten interested in digging into my old X-Men comics. It might have something to do with Shawn Robare on Twitter showing off some comics he recently tracked down from one of his favorite X-Men runs (Which led to me on Twitter, showing off the same thing). He writes all about it here on his blog, Branded in the 80's.

Once I dug into those long boxes though, I didn't want to pack them all away again. So  I did what any full grown adult would do and I plastered a corner wall of the Geek Cave with them. It reminded me of the comic shop I used to frequent in Bar Harbor Maine, "Nostalgia Ink" back when these comics were actually coming out, because they would display pricier back issues on the wall behind the counter just like you see here. 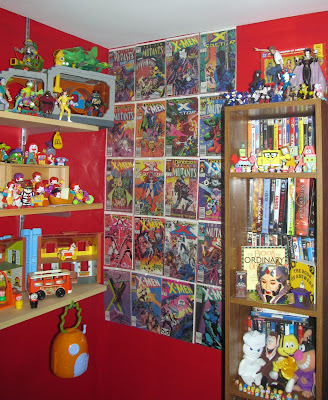 All of the issues I have displayed here are special for different reasons. The two New Mutants issues at the top are the very first comic books I ever bought that didn't star Harvey characters like Casper the Friendly Ghost or Hot Stuff the Lil' Devil. The entire 14 issue crossover of INFERNO is represented here (not including the INCREDIBLE Excalibur and X-Terminators issues, or the various and mostly awesome crossovers into books like Daredevil, Spider-Man, etc.) One of my absolute favorites is this little gem:

It features Illyana Rasputin in the most corrupted version of her Darkchylde persona, fighting her way through a demonically possessed city-scape. In one memorable scene she is tempted to drink a milkshake made of pureed nuns and priests. It doesn't get much better honestly. The green demon you see above is N'Astirh, one of the demonic big-bads of the event. 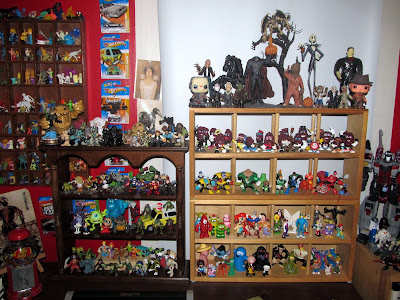 In addition, I felt like showing off the fact that I found another wooden CD case at Goodwill that is exactly like the other wooden CD case I already own and use to display toys. The new one is on the bottom, and has the Yo Gabba Gabba, Rescue Rangers, The Tick, and other various toys on it. That's all. Just wanted to show off yet another picture of my desk. I love my desk. It has some representation of almost everything I love on it. The only things I can think of that are missing would be classic toylines like MotU and GIJoe. But they show up elsewhere. And because I had the camera, and I was already taking pictures... I took some more. 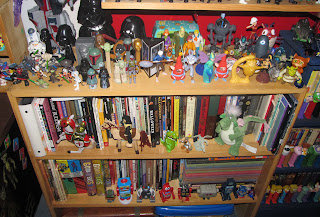 Here's the rest of my Star Wars stuff, Dreamworks toys, Knights and dragons, and robots. 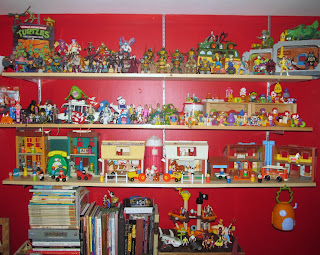 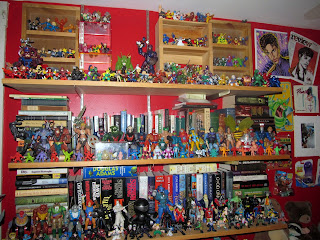 The real purpose of this pic is to highlight the Super Hero Squad collection on the top shelf. But there's a ton of great vintage toys that I love here too. I've shown most of this stuff of before, but I've been making an effort to simplify and streamline things, so it doesn't look as cluttered. I've removed a lot of books to make shelf-space (a lot of them have been transplanted to a bookshelf in my bedroom, to my wife's delight). 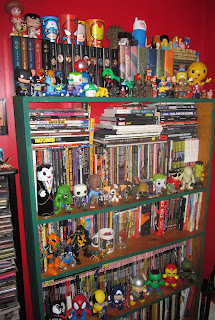 Here's my comic trades collection with all the rest of all my other, un-categorized stuff. There's a ton more to share, but like I said, I'm being lazy. So... here's a bunch of pictures of my stuff that you've probably already seen before, when I first unveiled the Geek Cave back in November.

Sorry. I realize this post was all over the place. But... toys! Comic books! Enjoy.

I'll be back soon with more Geeky Goodwill Goodies! Until then, Happy Hunting!
Posted by Derek Ash at 3:23 PM