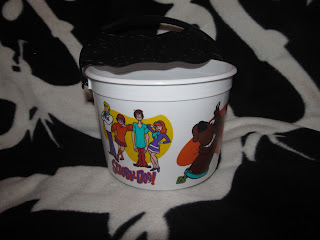 First up is this Scooby-Doo Trick or Treat pail. I know it's not terribly remarkable, in and of itself, but it was the last one I needed to complete my set of 3 and I paid .99 cents for it instead of having to pay Happy Meal prices for it... and since it was the first one out in our area, I couldn't have gotten it any other way. So... I was pretty pleased to find it donated to Goodwill so soon after it was released.

See the rest of the last after the jump!

Along with the assorted action figures I featured in the first of these three posts (Including Bruce Wayne, a MASK figure, and some Mini-Mutant TMNT figures) there were some other figures as well. They were in two seperate Grab-Bags, but you could tell that they'd probably all been donated by the same donor. 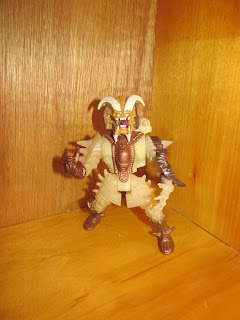 This is a 1994 Stalker Predator action figure. He's missing all of his accessories, including a helmet, a gun, and some other projectiles. There's a review of this complete figure here. He was a part of a large, 2.99 grab-bag that included a BUNCH of other figures. 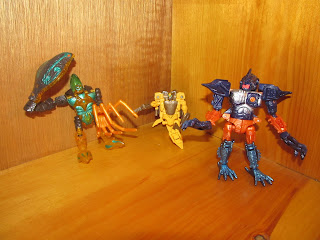 In the same bag with the predator were these guys, three different Beast Wars figures from three different Beast Wars series. From Beast Wars Fuzors: we have Quickstrike, from the basic Beast Wars we have: Air Razor, and from Beast Wars Transemetal we have: Iguanis. Quickstrike is missing a leg, and Iguanis is missing all the pieces to his fringe, and I am not a Beast Wars fan... but I like these guys, especially Quickstrike, who is a combination of scorpion and cobra in his beast mode (although I question the wisdom, effectiveness, and basic logic behind using animals as camouflage if you're going to make them into impossible hybrids... but maybe I'm missing the point). 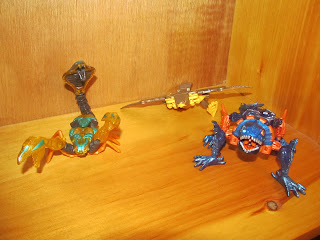 Here they are in their Beast modes. What is not to love about a scorpion with snake heads on all his business ends? End of discussion. 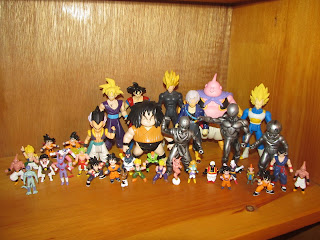 The real star of the Grab-Bags were these guys. I do not like anime or specifically Dragon Ball Z at all... but seeing two big bags full of figures (one of large action figures, for 2.99, the other all mini-figs, for .99 cents) was irresistible, especially since I could see so many of them were actually not Dragon Ball Z figures. I haven't decided what to do with these guys yet. I actually kind of like the look of a few of them, but I really don't have any interest in keeping them. Any Dragon Ball Z fans in my followers? I'm thinking that maybe when I finally do my first Goodwill Hunting 4 Geeks giveaway, these guys may play a large role. 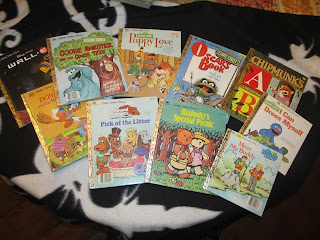 Here is the armload of Little Golden Books that I brought home, including a recently produced WALL-E book with AWESOME retro-style artwork. You'll notice 4 vintage Sesame Street titles, Cookie Monster and the Cookie Tree, Puppy Love, Oscar's Book, and I Can Dress Myself. Then there's the incredibly cool and old Donald Duck and the Witch Next Door (Featuring Madam Mim), along with Richard Scarry's Chipmunk's ABC, and Bialosky's Special Picnic (which I picked up because Bialosky's Christmas is one of our family's Christmas classic favorite books). I pick up any vintage, non-annoying (no Pooh, no religious, among other things) Little Golden Books I come across. Finally there's a couple of 80's toy properties featured in Pound Puppies: Pick of the Litter and My Buddy: Meet My Buddy. Every one of these books cost me .99 cents. 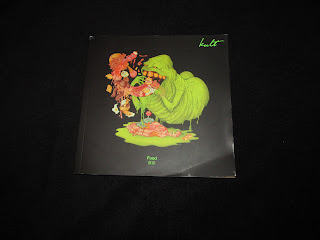 Next up I found an issue of Kult, which is an art periodical that collects pieces from various different artists each issue, all focused on the same theme. This issue's theme was food. Each artist was given a food fact to focus their piece around, and it makes for some very trippy viewing. I love the amazing diversity of the artwork featured here, and that cover featuring Slimer was worth the .99 cents I paid all by itself. 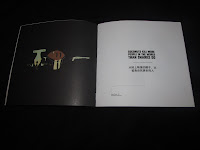 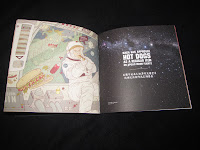 Here are a few featured pieces from the interior, including an awesome Pulp Fiction pic based on the likelihood of being killed by coconuts vs. sharks, and Hot Dogs in Spaaaaaace! 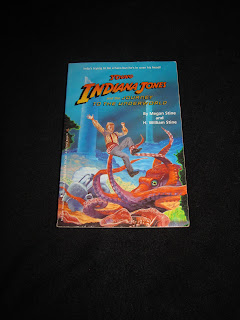 Here's another Young Indiana Jones novel, this time around it's a Journey to the Underworld. It goes in with the others I bought a while back, which I am saving to share with my boys when they are chapter-book ready. 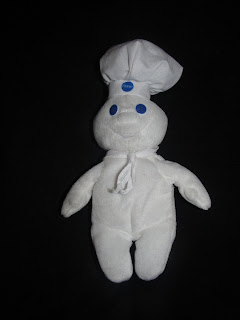 Finally, I have this Pillsbury Dough Boy beanie, which will go right on the shelf next to my cereal mascots. I'm a Dough Boy fan from way back, and in general, advertising Mascots just make my day. The .99 cents I paid for this little doughy dude was totally worth it.

So that finally finishes off this Payday Goodwill Frenzy from 2 weeks back. I came home happy, and with a lot of stuff to share. I'll be back soon with more gratuitous Goodwill Goodies... so until then, Happy Hunting!