A Few Things I'm Thankful For

Just a quick one to prove I'm not dead,.
With Thanksgiving coming, I thought I'd mention that I am thankful for a great many things:
My new home, my three beautiful kids, and my wonderful wife.

I'm thankful that I'm in a relationship with someone who may not always understands why I'm obsessed with the things I'm obsessed with... but cares about me being happy in my obsessions. With that in mind, she may not see the point in spending money on the things I spend money on... but that doesn't mean she won't spend money on things (she doesn't see the point of)... if they make me happy.

With that said... my birthday was in October. I didn't talk it up because I really wanted to focus on the Halloween Countdown... but now that's over, and I've been dying to blog about my birthday gifts.

There was a trip to Goodwill in Bangor as a part of my birthday OF COURSE. We also hit Target and Toys R Us, and there were a handful of self-bough birthday gifts I picked up for myself in the course of the day, including this : 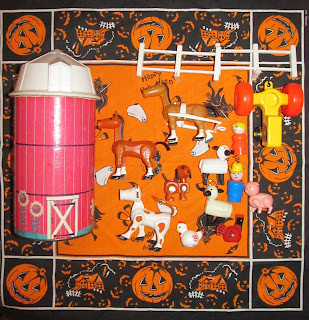 First up my trip to Goodwill turned up this awesome find of a silo filled with Fisher Price Little People farm toys for .99 cents!!! You'll notice I took the picture on a Halloween background because I was considering sharing this post as a part of my countdown, and then changed my mind. I was sooo excited to find these toys, as I now have some people, animals, and accessories to display with the Farmhouse I fixed up.

See even more great Birthday finds...
And see how I tenuously tie this post to Thanksgiving after the jump! 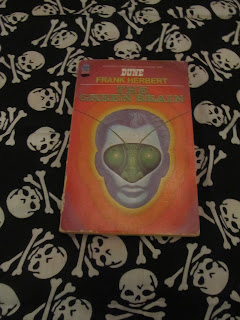 From the author of Dune, Frank Herbert, comes this book with an incredibly awesome cover The Green Brain. I paid .99 cents for it, and I will admit I bought it for the Herbert name... but mostly for that cover. Look at that. I'm seriously trying to find a cool way to mount this on a wall somehow. 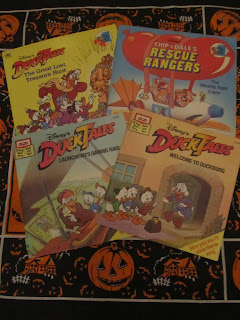 The three Duck Tales books are from my birthday outing, while the Rescue Rangers book was picked up a while later, closer to the end of October. I never leave a Disney Afternoon book behind when I find one. These were all .99 cents a piece. 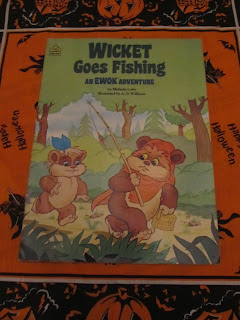 I think I am one of the few people who exists that remembers the Ewok cartoon fondly. I didn't care what it was doing to the Star Wars mythos back when it was on the air. It was a weird Smurfs/Biskits/Monchichi clone that involved teddy bears dressed up like Indians. I liked it. So when I found this old book based on the show, I had no guilt whatsoever picking it up for .99 cents.

So why am I talking about my birthday for Thanksgiving? Let me tell you why. Once I admitted to my wife that the original Sesame Street Little People Playset was a "Holy Grail" item for me. I forgot about the conversation... but my wife did not: 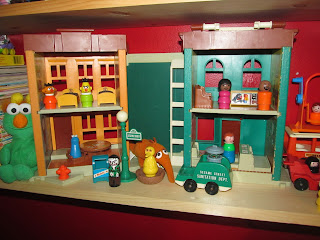 For my birthday my wife braved the tumult of eBay to win me a lot of Sesame Street Little People toys, including the playset, various set pieces including a fire hydrant, mail box, and the iconic Sesame Street sign, Gordon and Susan figures, Cookie Monster, Big Bird, Bert, and Ernie. The set also included a lunch counter for Hooper's store, a T.V. featuring Grover, a couch to watch him from, bed for Bert and Ernie, and a Dining Room table. Rounding out my new collection are a nest for Big Bird, a garbage truck from the Sesame Street Sanitation Department, and Oscar in his garbage can.

My wife did this for me. She showed me she listens, she cares, and wants me to enjoy the gifts she gives me out of love. She is an incredible woman and I am incredibly lucky and thankful to have her in my life. (She ALSO bought me those shelves you see in the image for my Geek cave... so she kicked twice as much ass for that.)

Anyway, I hope you all have a great Thanksgiving, and that you all have a ton of things to be thankful for.
I'll be back soon with more Goodwill goodies I'm grateful for... so until then, happy hunting!