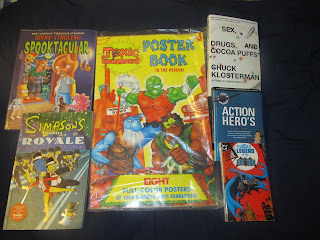 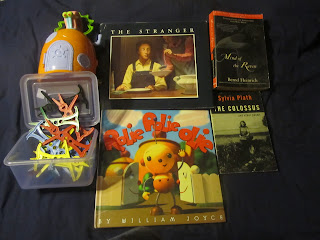 More details after the jump!

It was a pretty book heavy visit this time around, but with some really fun finds. Every time I go into a Goodwill, my first stop is the toy section. You never know if there will be a feast or famine of things to pick through, and soul-crushingly, there is often a dearth to choose from. 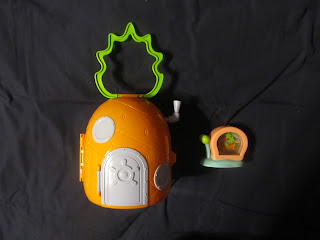 So first up I found some Spongebob stuff. Nothing too exciting. They'll make nice dressing for my "Truth or Square" figures when I unpack them at the new house. The Pineapple is actually a cake topper from Hannaford's that opens to store other toys. The Gary figure is a 2011 Burger King toy that you fill with water and there are tiny Jellyfish and flowers that float around inside. I have no idea why, but there is a picture of Spongebob and all of his friends riding a bus inside Gary's shell. I probably wouldn't have picked Gary up except for that one piece of surreal weirdness. Both purchases were .99 cents. 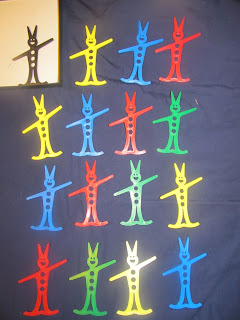 Next up was this bizarre set of plastic men. They are some sort of game or stacking set, I'm convinced, but I'm not sure yet how to use them. I just really liked the look of them. There were 4 red, 4 blue, 4 yellow, 3 green, and 1 black (he's alone on the white background because he was almost invisible against the navy blue). I'll post an update when I figure out what these guys are for. I got a little sterilite tub filled with the 12 little guys pictured here for .99 cents.

Anyway, that's it for the toy purchases. On to the books: 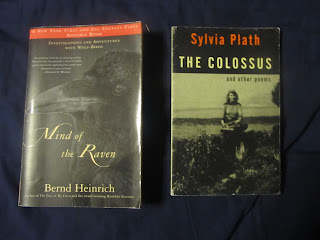 The first batch of books are all interesting for various reasons, but not really the most exciting, so I won't spend a ton of time describing them. First up we have "Mind of the Raven". It's by Bernd Heinrich, and it's a study on Raven behavior. Ravens and other blackbirds have always fascinated me, so I've been wanting to grab it, but I usually have a price limit on the books I buy, and this book was previously priced at 2.99, which for a paperback that I have no idea if I will enjoy or not... is too much. For this reason, it is a book I've been dithering back and forth about buying for weeks now. Well, as luck would have it, it was half off today because it had a green sticker, and if you are not familiar with Goodwill's tagging system, you should know that every few days they choose a particular colored tag to sell at 50%. Today's color was green, and they had apparently dropped the price from 2.99 to 1.99 at some point, so I got this book for .99 cents. Next up is a book of poetry by Sylvia Plath. It just looked interesting, and I like poetry. .99 cents. Moving along. 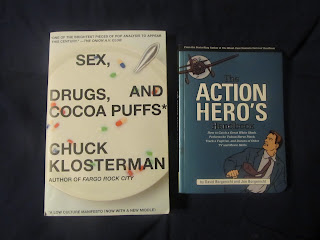 Next up we have "Sex, Drugs and Cocoa Puffs: A Low Culture Manifesto" by Chuck Klosterman. I'm really looking forward to this one. It's a series of tongue-in-cheek pop culture essays on topics from Saved By the Bell, The Empire Strikes Back, and reality TV to Billy Joel, internet porn, and When Harry Met Sally. I'm hoping it's excellent, or at least just not meh. Then we have "The Action Hero's Handbook" by David and Joe Borgenicht. It's one of those parody self-help books that teaches you various skills such as delivering a Vulcan neck pinch, dirty dancing, contacting the dead, catching a great white shark, or spy-proofing a hotel room. It looks fun. These were both .99 cents apiece. 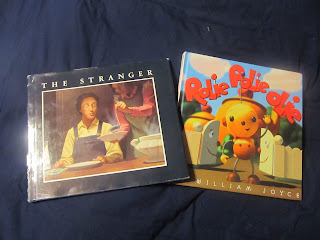 I'm a big collector of certain children's books, and I even share some of them with my kids! I love both William Joyce and Chris Van Allsburg, so when I found an old Library discard of Van Allsburg's "The Stranger" for 1.99 and William Joyce's "Rolie Polie Olie" for .99 cents, I knew I would be keeping the first and happily sharing the second with my kids. Van Allsburg's books are always haunting, original, and magical. The art is some of the most amazing ever seen in print. William Joyce's art and stories (including George Shrinks, Dinosaur Bon, and Bentley and Egg) are not always completely perfect, but they have a great retro mentality mixed with a very modern outlook. Really excited about these. 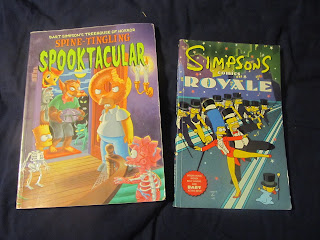 Simpson's comics seem to be a popular item to donate to Goodwill. Even though I have (still) never read even one volume, these will make the fifth and sixth Simpsons comics collections I have bought at Goodwill. The oversized "Bart Simpson's Treehouse of Horror: Spine-tingling Spooktacular" is actually filled with not only comics, but other full page gags, Homer's Halloween Carols, and other items to see and read. It reminds me a bit of how Mad Magazine is set up, and cost me 1.99. "Simpsons Comics Royale" is a standard trade paperback size, contains 10 different Simpsons tales, and cost me .99 cents. I'm hoping they're good. 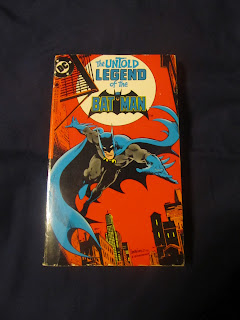 That finally brings me to the last two, possibly geekiest finds of the day. First up there's a 1982 paperback (and I mean little paperback, not trade) copy of "The Untold Legend of the Batman" written by Len Wein, and illustrated by Jim Aparo and John Byrne. This was in the glass case at the front of the store, even though I can't imagine it being worth a fortune or anything. I've seen it kicking around various other used bookstores in the past, but getting it for 1.99 at Goodwill was nice. 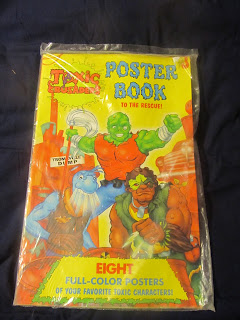 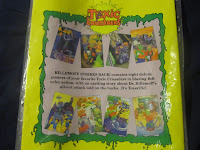 Last but definitely not least is this bizarre little piece of cultural flotsam. It is a "Toxic Crusaders To the Rescue!" Poster book from 1992! If you aren't familiar with the Toxic Crusaders, it isn't surprising. They were a cartoon developed from the famous Troma film property the Toxic Avenger (which was definitely NOT kiddy fare) and spun into a Teenage Mutant Ninja Turtle style knock-off with mutated heroes and villains. On the cover there you can see Toxie, No-Zone, and Major Disaster. Tragically missing from the cover and the posters pictured on the back are my favorite members, Headbanger and Junkyard. It's still sealed in plastic, and I'm trying to decide if I want to pop it open and see the inside. I got this bad-boy for 1.99.

So all in all, not the best haul I've ever gotten from Goodwill, but still a lot of good fun to be had.
Posted by Derek Ash at 2:51 PM