The Christmas Post That Almost (Not Almost... ACTUALLY) Wasn't...

So yeah... I said I wasn't going to blog during the Christmas season... and I was fine with that... I stuck to it. Then I realized I would have to share all the Christmas stuff I've been saving up for my December posts... when exactly?

Next year? No thank you. I decided I'd drop this in early January for some unknowable reason.

So here we are. This is where my life choices have led us.

Here are a couple of piles of Christmas junk I wanted to talk about on my blog. 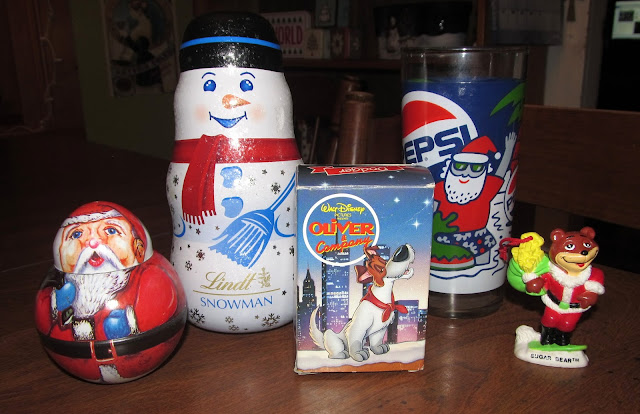 First up we have some decorative items. Some pretty neat stuff, right? Let's explore them together...

Just you and I. 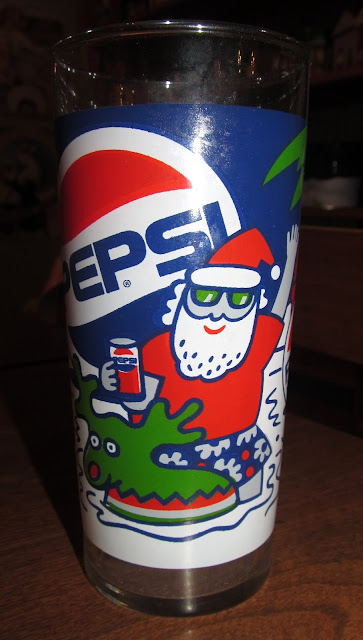 First up we have this "Santa on Summer vacation" Pepsi glass. This bad boy is from around 1990, when they were also producing cans with this design on them. Chad over at the Horror Movie BBQ and I have an ongoing, almost competitive, Pepsi glass-spotting fetish that seems to be going on a lot longer than most normal people would find appropriate. 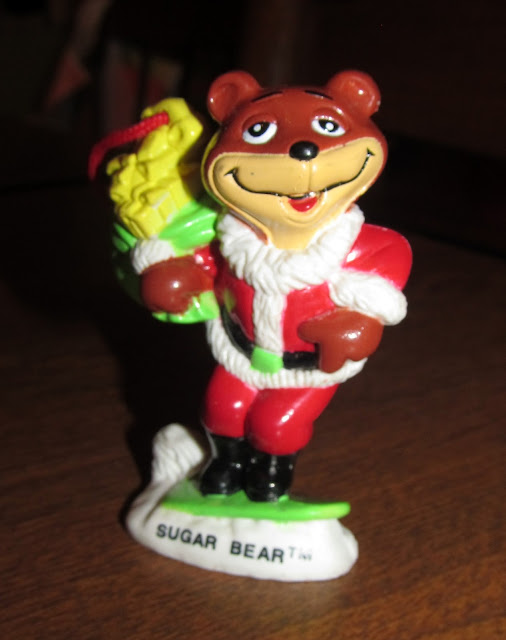 I am probably more excited about finding this Sugar Bear Christmas ornament than anything else in this post. This guy was produced back in 1993 and Just. Look. At. Him.

Of all the crap in this post, this was one of the few items that got me to burst out with a loud, "Oh!" in the vicinity of other humans with ears capable of hearing my childish exclamation. 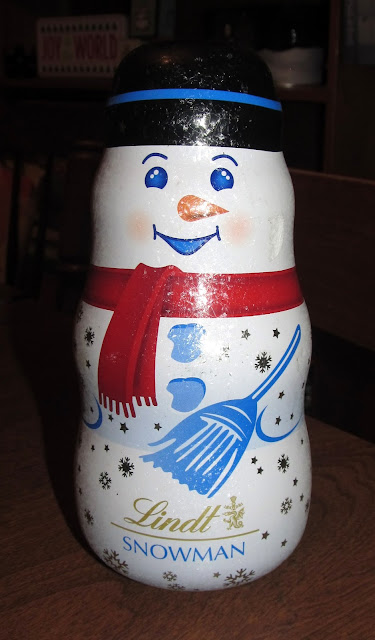 I would not have bought this Lindt Snowman tin if the donated Christmas decorations had not been half off. But they were, so I did. He's fun... and so fancy. Now people will think I'm classy and I buy Lindt. (But between you and I, dear reader, I am in fact completely UN-fancy. I am much more prone to the vulgar world of second-rate CHEAP chocolate than any other... to my utter shame.) 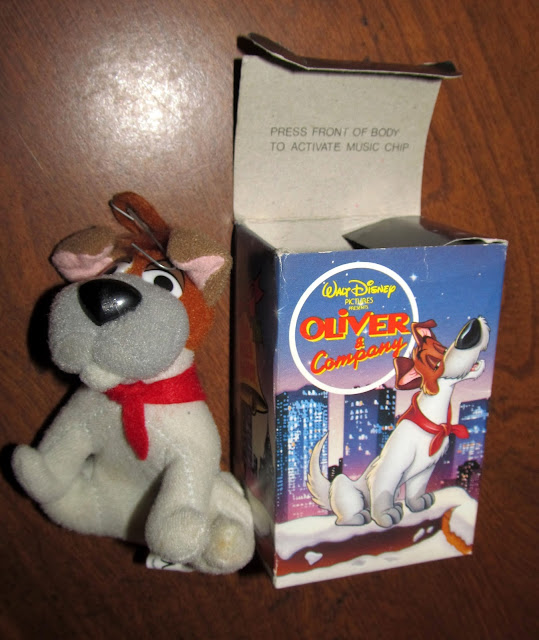 Another ridiculously exciting item in this lot is this boxed Dodger ornament from Oliver and company, from back in 1988. I find myself getting ridiculously enthusiastic about these Disney collectible ornaments. I found a Sebastian the Crab from The Little Mermaid awhile back, and this guy had me almost as excited as that. On a sidenote, I could not BELIEVE that Oliver and Company is actually an older movie than The Little Mermaid. I checked and double checked that fact a few times before I let myself believe it. Why does Oliver and Company feel like it was a 90's movie? 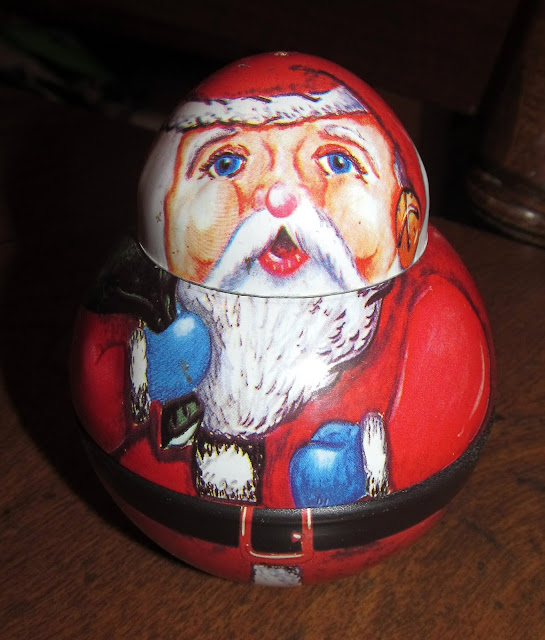 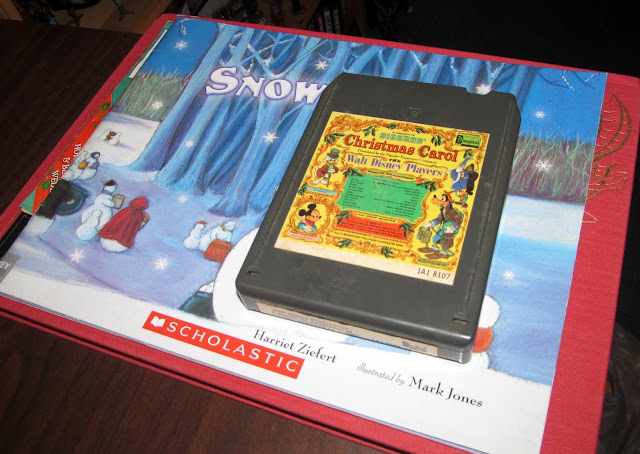 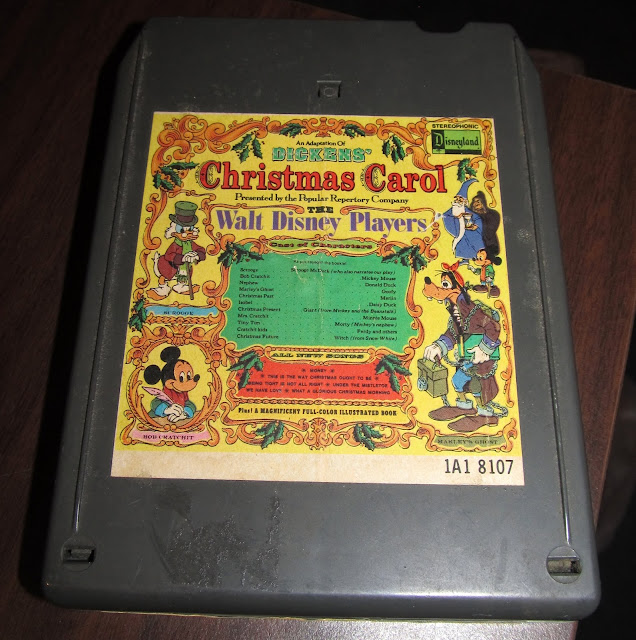 First off, we have this precursor to the animated television special, "Mickey's Christmas Carol". This one is performed by the "Walt Disney Players". 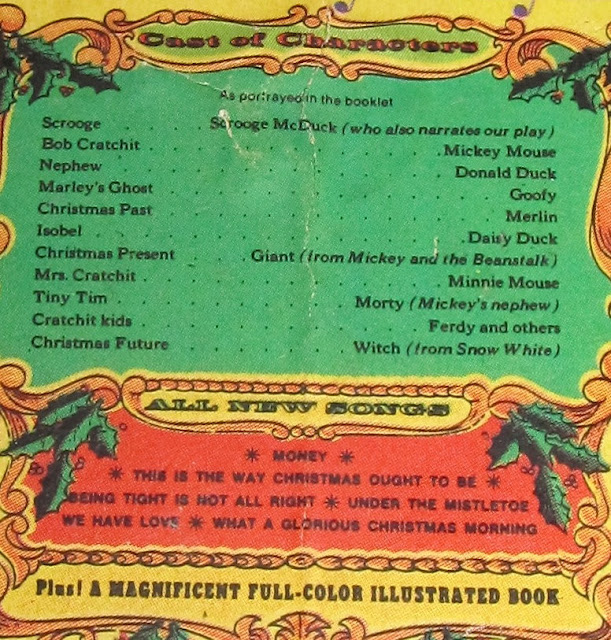 Apparently the televised animated special also spared us the pain of MANY musical numbers. There were quite a few on this tape. Goofy's song, "Being Tight Is Not All Right" seems like it belongs in a different kind of show. 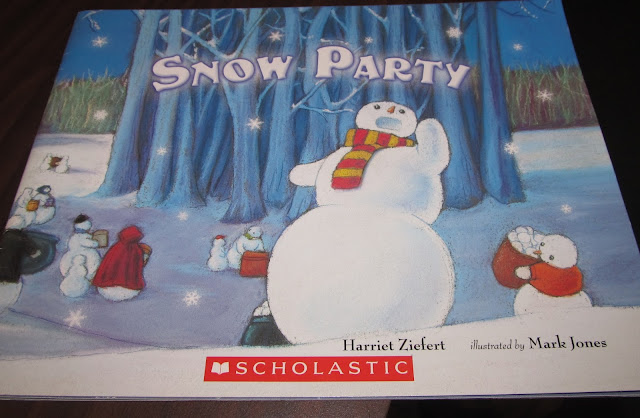 Found this awesome book, "Snow Party" for the Christmas kids' book pile. It's not a Christmas book per se, and it was probably very carefully crafted to be a winter holiday book for folks not celebrating Christmas... but I'm not worried about "The War on Christmas," so this beautiful little book is a nice addition to our holiday season. 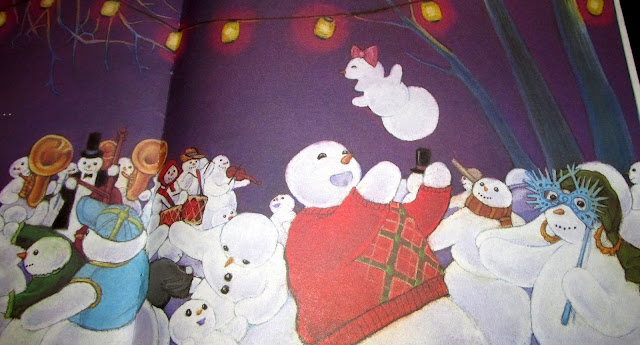 This is a book where snowmen get together to hold a huge celebration on the first snowy day of winter. The celebration is beautifully illustrated.

Such a fun and simple little book with a nice feel to it. My kids liked it quite a bit. This will definitely be added to the rotation every year. 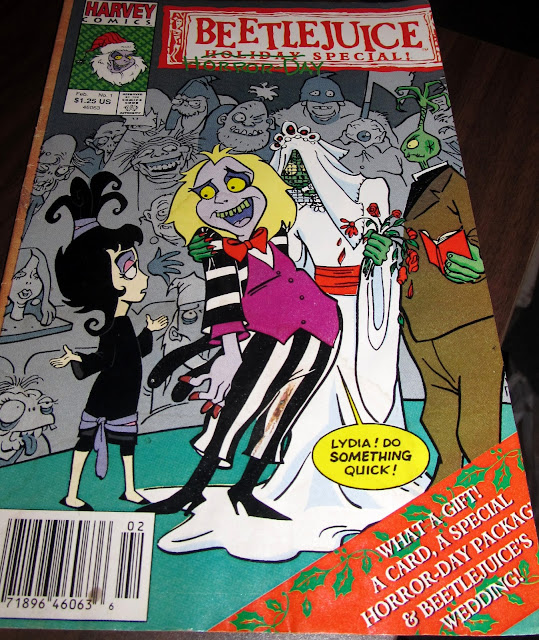 I also found this beat up copy of the Beetlejuice "Horror-Day" special. In which Delia's and Beetlejuice's Christmas celebration gets sidetracked by a pickle he's gotten himself into with a ghostly engagement to be married. 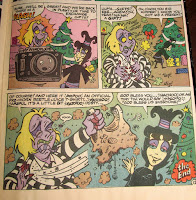 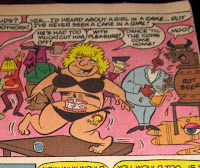 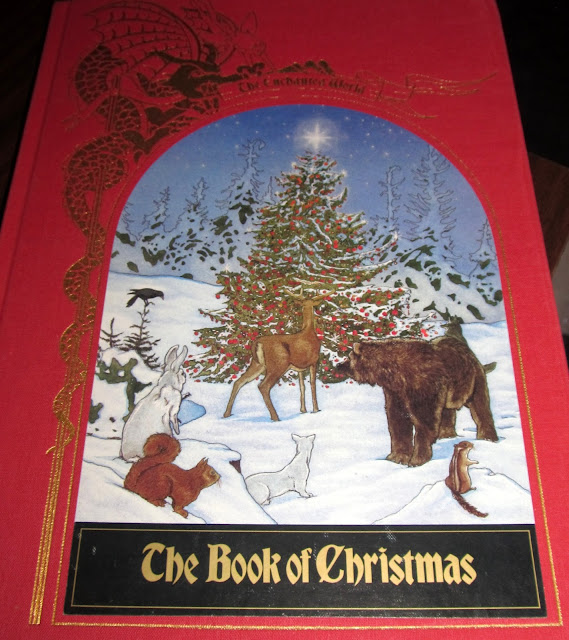 This final book is honestly something I've been trying to track down for YEARS. I LOVE Christmas mythology, and any reading materials I can find that describe traditions and myths from around the world pertaining to Christmas are must-haves. I also really enjoy the Time/Life series of books entitled "The Enchanted World." And I've been keeping an eye out for "The Book of Christmas" ever since I discovered that my high school library had a set of these books and this was included in the collection. 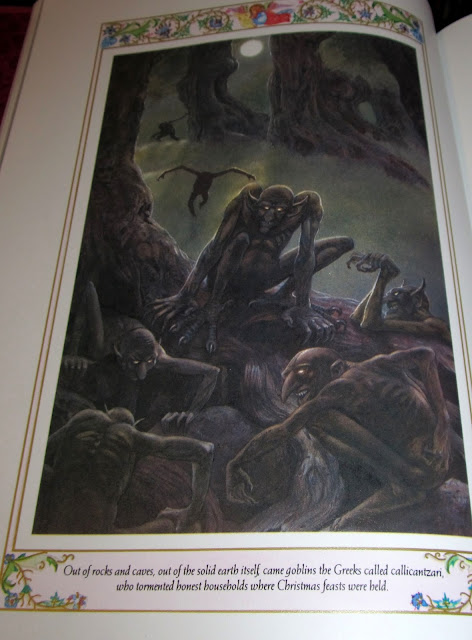 It wasn't all I dreamed it would be, if I'm being strictly honest. It was nice to cross this one off the list finally though. And a lot of the illustrations are really fun. They don't delve into the darker corners of the Christmas mythos as much as I would have liked. No appearances by Black Peter, the Yule Cat, or Krampus for instance. But the Kallikantzaroi make an appearance! Although, they do make the mistake of confusing/blending the name with the Callicantzaroi which were a sort of Greek Christmas Vampire if I'm not mistaken. 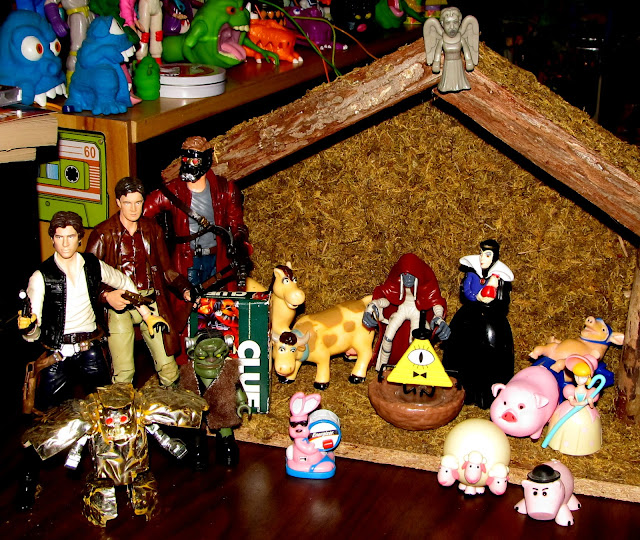 And last but not least, I did actually put together a 2015 Goodwill Hunting 4 Geeks Toy Nativity Scene. I was not even remotely happy with how it came out, so I didn't give it ANY fanfare and I look forward to doing a better job next year.

The Three Wise Men are Han Solo, Mal Reynolds, and Peter Quill. They come bearing gifts of Gold (Nuggit), Frankenstein, and MURDER (CLUE). Murder was a last resort honestly. I wanted it to be Gold, Frankenstein, and Murray... but my minimate version of Peter Venkman is strictly the animated version which was voiced by Lorenzo Music, whose portrayal of the character Murray famously decried. So I just couldn't say he was "Murray". (On a side note, I got the Ecto-1 Ghostbusters LEGO set for Christmas so next year, look out! It's the movie version of the 'Busters and this Venkman is ALL MURRAY BABY!!!)

The shepherd is Bo Peep from Toy Story. She's played this role in years past, and I was kind of kicking myself for not finding an original character for my shepherd... but she's literally the only shepherd character I own who comes with her own mutant, three-headed sheep. I have a few pig toys I added just for the heck of it, and to round out the animal population I added the Gladys and Buster figures (or the figures I INSIST represent those two characters) to the creche.

The energizer bunny plays the role of my little drummer boy this year, and a Weeping angel watches from above.

That leaves only the starring family left to describe, including Mumm-Ra as Joseph, the Wicked Queen from Snow White as Mary and Bill Cipher of Gravity Falls infamy as the center of the tableau. I went with a slightly evil bent for some reason. I have no explanation as to why I did this.

So... welcome to January 2016 everybody! We're like a week in, and things seem to be going fairly smoothly.

In other news, my good buddy Brian Farrell of Pop Pop! It's Trash Culture fame has been interviewed by the NEMMC (New England Media & Memory Coalition) about the concept of "Trash Culture". It's a great read, Brian makes a lot of great points, and I really urge you all to go check it out if you're a collector of literally ANY sort.

2016 should be a fun year! I'm going to try and mix things up here a little bit, and while I'll still be posting lots of "Hey, look what I found!" kinds of posts, I would also like to tackle a few specific topics as well. Things I like and love, people on the internet I find interesting, reviews of things, I dunno, whatever strikes my fancy. So look forward to all of that, I guess.

I also want to remind all y'all reading this that I co-host a podcast with three of my good friends from these very internets! The aforementioned Brian Farrell, the both wondrous and wicked Miss M of Diary of a Dorkette fame, and Jason Roberts of the Nerdy Life of Mine blog. Together we are the Eclectic Mayhem podcast! YOu can dowload us on iTunes, so please be sure to subscribe and leave us a review! 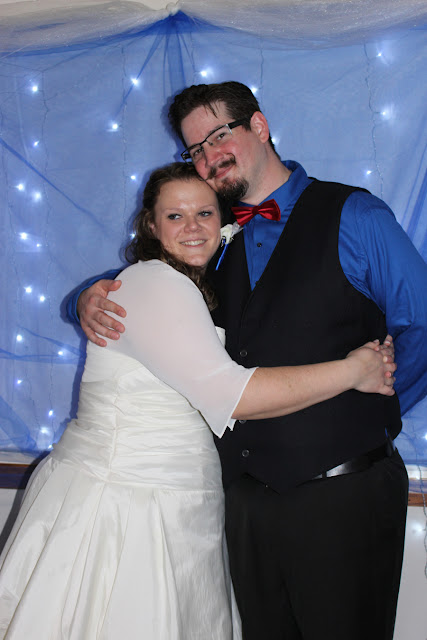 Aaaand... since I haven't mentioned it here previously, I want to take a moment and congratulate Jason Roberts on his 2015 Halloween wedding to Carly Roberts!

And with that dear readers, I bid you a good night! I'll be back soon with some Geeky Goodwill Goodies to share! Until that time, Happy Hunting!
Posted by Derek Ash at 5:51 PM